10 Vegan Foods Not To Miss in Southeast Asia 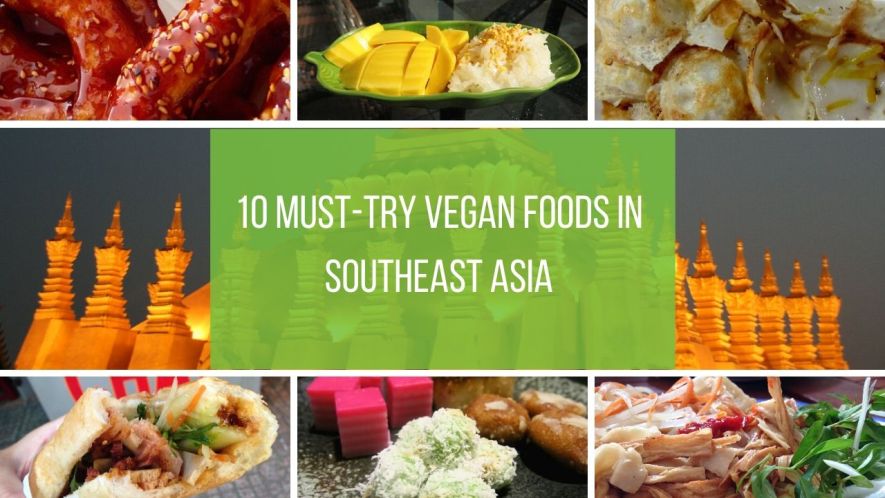 A few weeks ago, I wrote a guest post over on Vegan Food Quest highlighting a vegan dish from each of the 20 regions of Italy. If you haven't seen it yet, you can check it out here.

Paul and Caryl - the vegan foodies behind Vegan Food Quest - have now come over to The Nomadic Vegan to return the favor by sharing their expertise on vegan food in Southeast Asia!

These two have spent loads of time in the region and know each country's cuisine inside and out, so I couldn't wait to hear what their favorite Southeast Asian vegan dishes were. Take it away, Caryl and Paul!

So you’ve booked your flight, you’ve planned your grand adventure to follow the trail around one of the classic and most popular travel destinations in the world.

Your bag is full of everything you might need (and probably a few things you don’t) and you’re about to touch down in one of the most exciting places to eat vegan food in the world.

Make sure you pack our list of 10 Vegan Foods Not To Miss in Southeast Asia and tick them off as you eat them, one delicious vegan treat at a time.

Beautiful, inspiring and vibrant Southeast Asia awaits you with its beaches, amazing temples, acceptance of LGBT+ people and delicious food. Thailand, Laos, Myanmar, Indonesia, Cambodia, Vietnam, Malaysia and the Philippines; these countries that make up the region are as diverse as the food you’ll find in each different place.

From the soothing bowls of ‘pho’ (pronounced ‘fur’) laden with fresh herbs in Vietnam to the spicy, rich and fragrant curries in Thailand; Southeast Asia is a foodie’s dream.

And it’s good news for vegans too; we’ve been traveling around Southeast Asia for the best part of the last 20 years and we’ve found some of the most delicious food we’ve ever eaten. Ever.

Have we missed out as vegans? Absolutely not. There’s an abundance of traditionally vegan food, meaning that you can eat the same food as the locals as you travel around, and with the rapidly spreading popularity of veganism to new corners of the planet, you can also find some of your favorite vegan food from home too. Vegan pizza, cake and burgers in Bangkok anyone?

We’ve put together our 10 Vegan Foods Not To Miss in Southeast Asia because the region boasts some of the finest vegan food you can lay your hands on and, let’s face it, who wants to miss out on that? 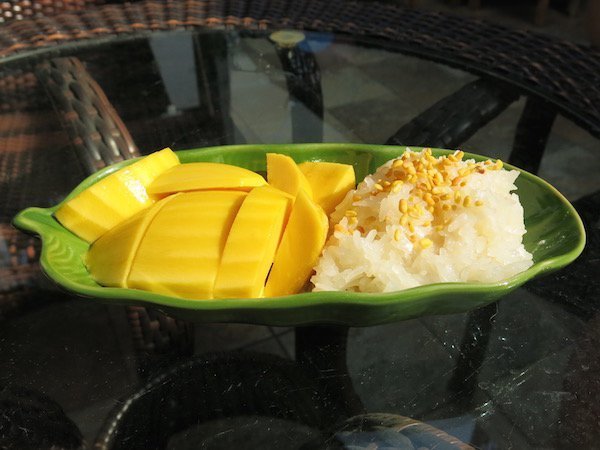 The mangoes in Thailand are legendary. Soft and sweet, rich and juicy; Thai mangoes often seem like they have dropped straight from heaven.

Mango sticky rice consists of a sliced, ripe mango accompanied by sticky rice that’s been cooked in coconut milk served with a sweet, salted coconut sauce and some crisped mung beans sprinkled on top. It’s always vegan, often found on the street and is as classically Thai as it gets. 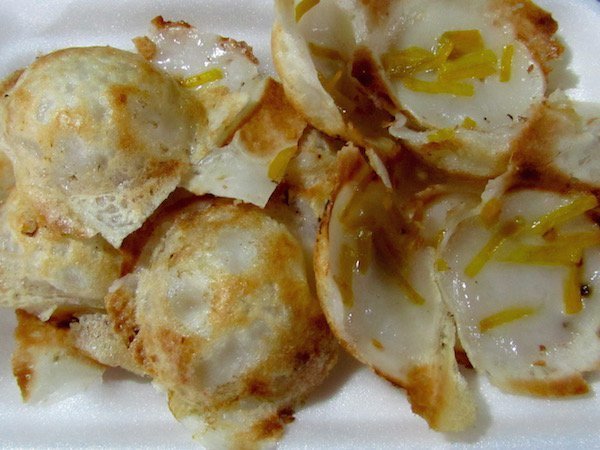 Khanom krok are small, circular coconut milk and rice flour ‘pancakes’ that are crispy on the bottom and soft and custardy on the top. Like lots of Thai food, there are both sweet and salty flavours to enjoy.

You’ll typically find them on the street in the afternoon and in night markets, and once you do, you too might find it hard to stop eating them (trust us, they are moreish). They come in a few different varieties which include the addition of sweetcorn or small strips of taro, but they're all delicious.

Read More: How to Volunteer with Stray Dogs in Thailand 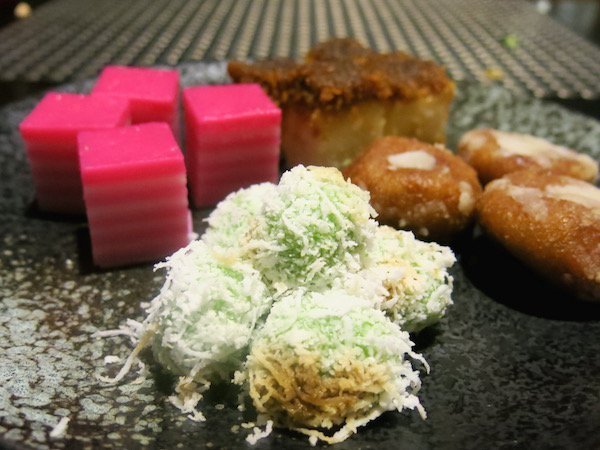 Malaysia is a wonderful melting pot of cultures, and its cuisine really reflects this. Ondeh-ondeh are from the Chinese heritage ‘baba nyonya’ cuisine and can be found easily in areas where this culture has been preserved - like the UNESCO world heritage sites of Georgetown or Melaka.

Ondeh-ondeh are rice flour dumplings which are filled with a dark, palm sugar called ‘gula melaka’. They are simmered in boiling water until they float to the surface and are scooped out to be rolled in freshly grated coconut.

Soft and chewy on the outside but with an explosion of runny sweet treacle-tasting filling as you eat them; you might be surprised just how good they are. 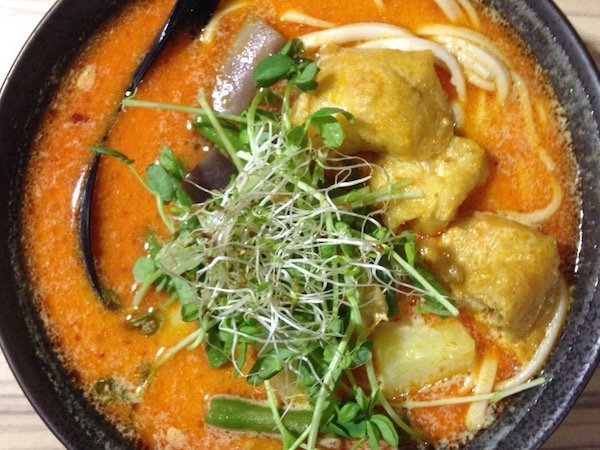 There’s not a lot of things that are more satisfying that a big bowl of rich vegan laksa. You’ll need to seek out a vegetarian restaurant, as there are many versions (most of which aren’t vegan), but thanks to the Chinese-Malay population there are many of these to be found.

Laksa is a noodle soup with a rich coconut-based spiced broth, full of things like tofu puffs, eggplant, green beans and fresh herbs. It’s a wonderful collection of flavours and textures, and the addition of a scoop of fiery chilli sambal takes it all to the next level.

Read More: Where to Find the Best Vegan Food in Penang, Malaysia 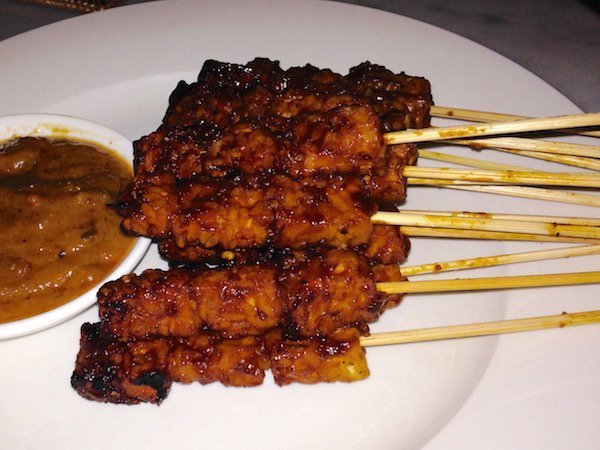 Why Indonesia is the only country on the planet where tempeh is eaten by everyone in abundance is beyond us. Made from fermented whole soy beans, it’s a protein-packed and versatile food that is found in many Indonesian dishes.

Whether it’s sticks of tempeh satay sizzled on hot coal grills on the side of the street, or the sweet, crispy, chilli-spiced tempeh penyet from a local buffet restaurant, Indonesian tempeh is something our vegan food dreams are full of.

Enjoy it deep fried in crispy fritters from street stalls, chopped up in curries, or marinated and braised with sweet soy and spices; the tempeh in Indonesia is the best in the world. 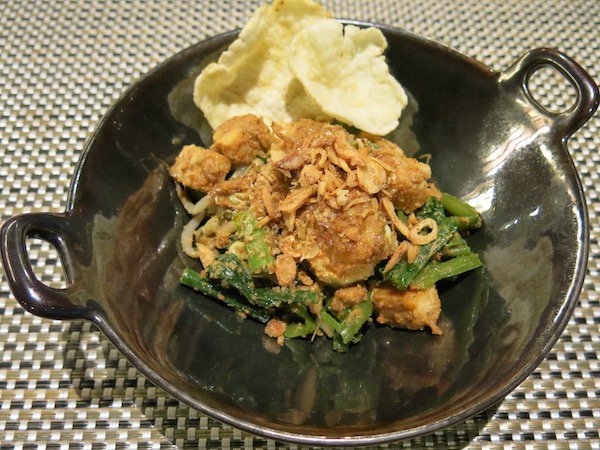 This is a risky food to include in our ‘must eat’ list because when you order a gado gado salad it can go either way.

You might be going straight to food heaven with a rich peanut-sauce-covered hearty ‘hot salad’ containing crunchy vegetables, potatoes or cubed rice cakes, tofu, tempeh and even delicious ‘emping crackers’ made from crushed melinjo nuts.

Or you might get a sludgy, overly sweet peanut sauce slopped on watery boiled veg. The risk is worth taking though (just keep ordering until you find a good one), because when you get a good gado gado (one of Indonesia’s most famous dishes) you’ll never want it to end. Make sure you always ask for the boiled egg to be removed to make it vegan. 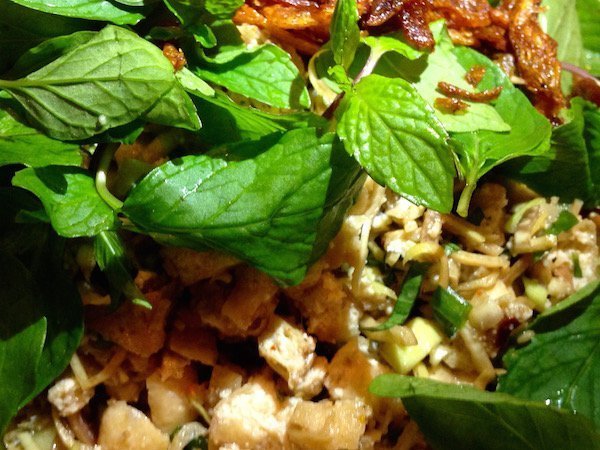 The vegan food in Laos isn’t much to write home about (sorry Laos), but the tofu laab from Lao Kitchen in Vientiane was so good it probably warrants visiting the country just for this dish alone.

Cubes of tofu are fried and then chopped up before being tossed in ground up, roasted rice with fresh herbs, chilli and a garlicky, soy-based, lime-filled dressing. It’s salty, sour, spicy and fresh, not to mention being packed with protein from all that tofu. Definitely one to seek out in Laos.

The Philippines didn't make it onto this list, since traditional Filipino cuisine doesn't have many vegan dishes. The vegan scene in the Philippines is really growing though! 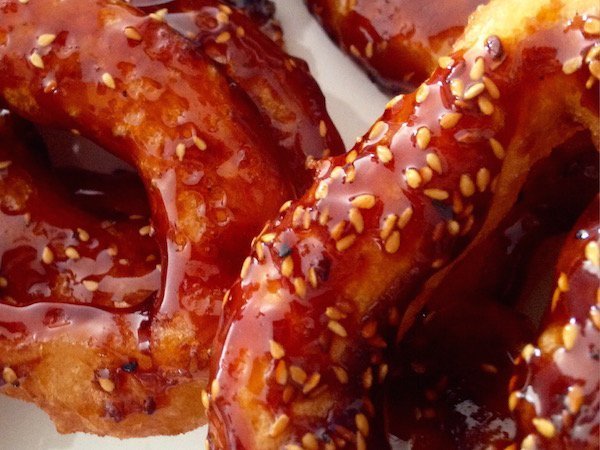 Cambodia is great for vegan street food, especially if you like to eat fried, sweet things. Keep your eyes peeled for ‘nom korng’, the Cambodian street food version of a doughnut, but made with a slightly chewy rice flour dough instead of wheat.

The dough is formed into rings and deep fried before being covered in nutty sesame seeds and a hard, sugary caramel that cracks when you eat it. The result is sweet, chewy, nutty doughnuts that will steal your heart, just like the rest of Cambodia. 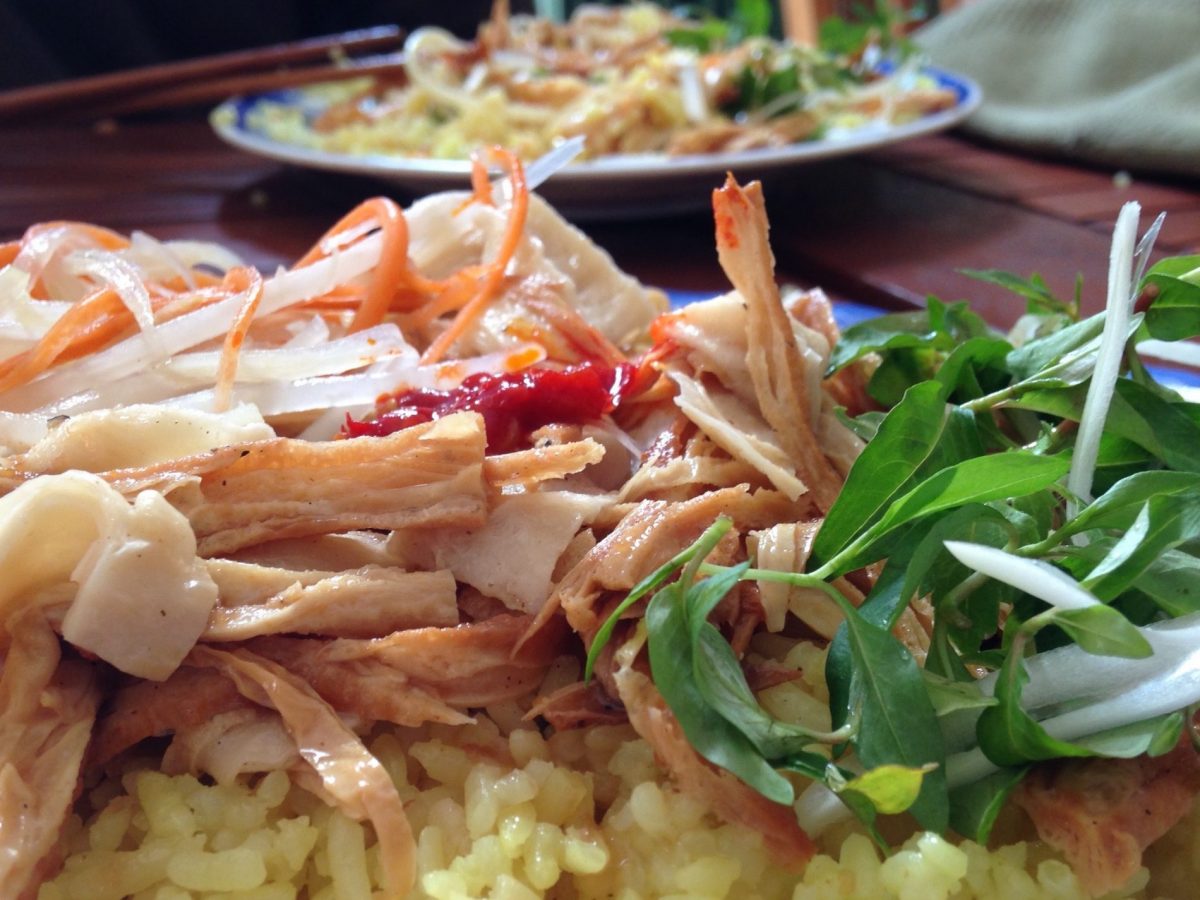 Vietnamese Buddhists have at least 2 days per month (the 1st and 15th days of the lunar calendar) where they eat only vegan food, and so we have them to thank for the plant-based recreation of the Vietnamese favourite ‘com ga’, which translates as ‘chicken rice’.

Shredded home-made ‘vegan chicken’ is served alongside yellow rice, a fresh herb salad and fresh chilli paste. We are told the vegan chicken is made from flour; it’s tender and juicy and isn’t strongly flavoured, but the recipe seemed to be a well-guarded family secret in every place we asked. 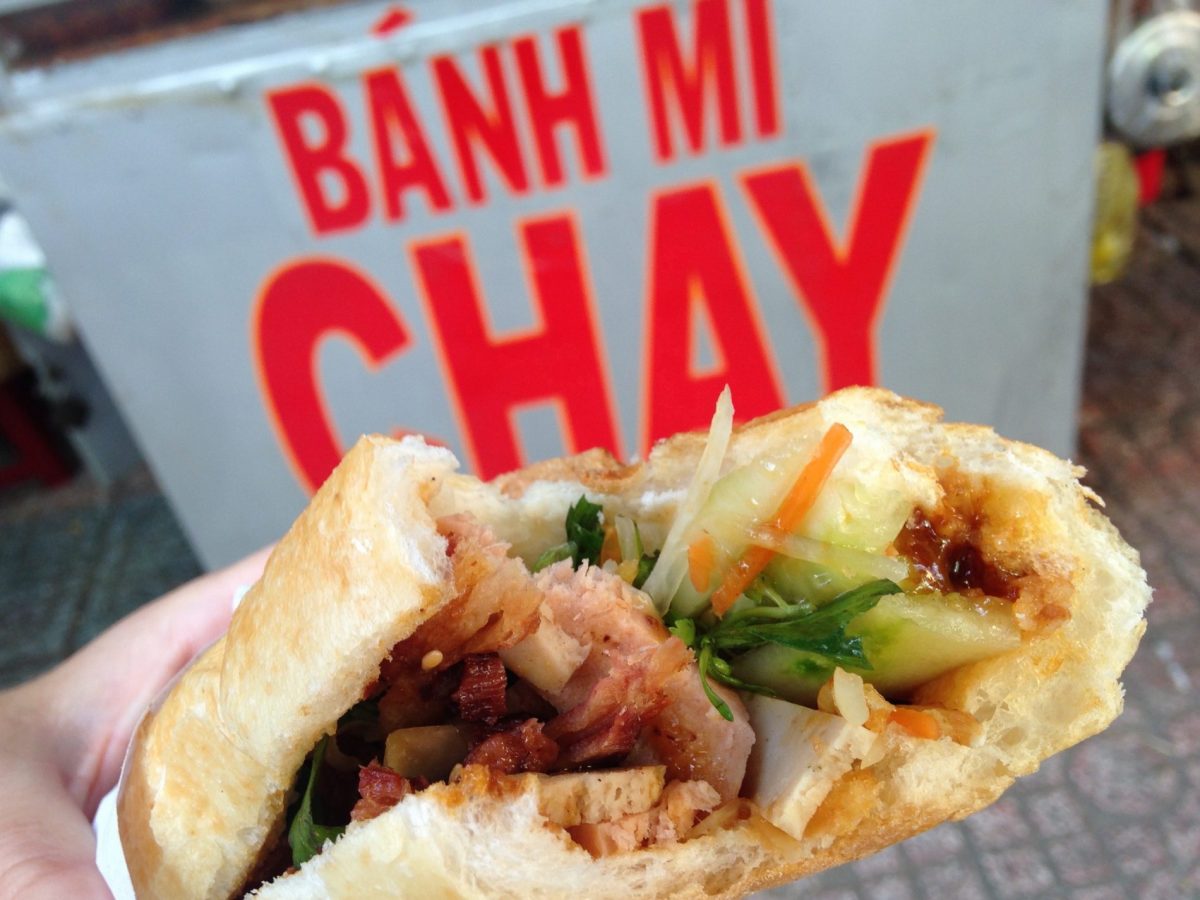 Possibly the greatest sandwich in the world, the Vietnamese banh mi is legendary. There are many meat-based versions of this super sandwich, but vegan versions are also to be found (either with tofu or with mock meat).

The tofu or mock meat filling is stuffed into a freshly baked baguette (baguettes in Vietnam are a legacy left from the French and are deliciously light and fluffy, yet crispy on the outside). Then crunchy sweet pickled vegetables, salad and fresh herbs are added and a spicy, rich soy chilli marinade is poured over the whole thing.

It’s a mammoth sandwich which should be enjoyed in its full, messy, lip-smacking glory.

Caryl and Paul are a couple of vegan travellers who are currently in Southeast Asia, where they are making it their mission to find, eat and write about the best vegan food they find. 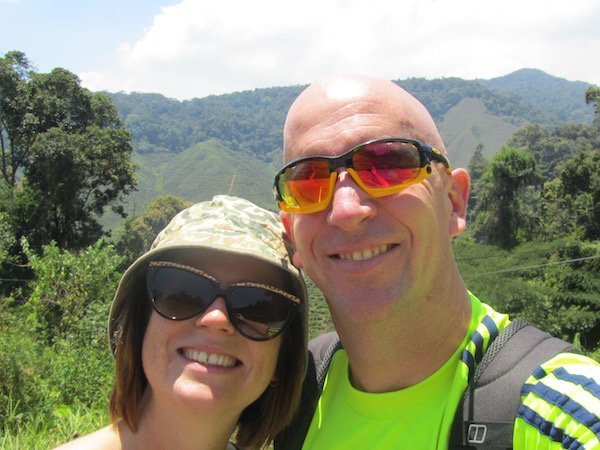 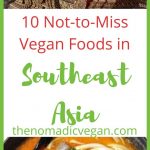 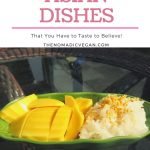 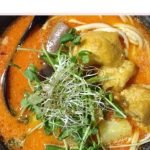 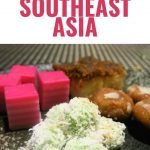