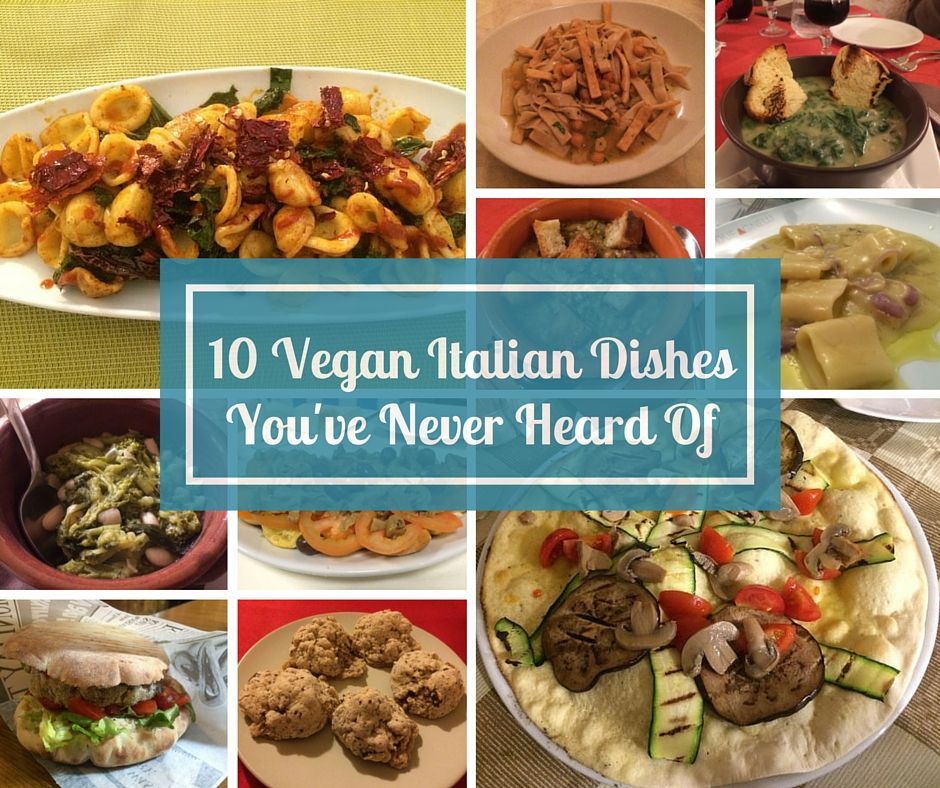 I'm always going on about how vegan-friendly Italy is as a travel destination.

And it's true. You definitely don't have to limit yourself to fully vegan restaurants in Rome or any other Italian city.

No matter where you are in the country, you'll always be able to find a vegan meal of some kind, whether it's a pizza marinara, a plate of spaghetti with tomato sauce, or just an antipasti platter loaded with grilled vegetables.

And as simple as these options sound (and they are), they're pretty much guaranteed to be delicious. Simplicity, after all, is the secret of Mediterranean cooking. 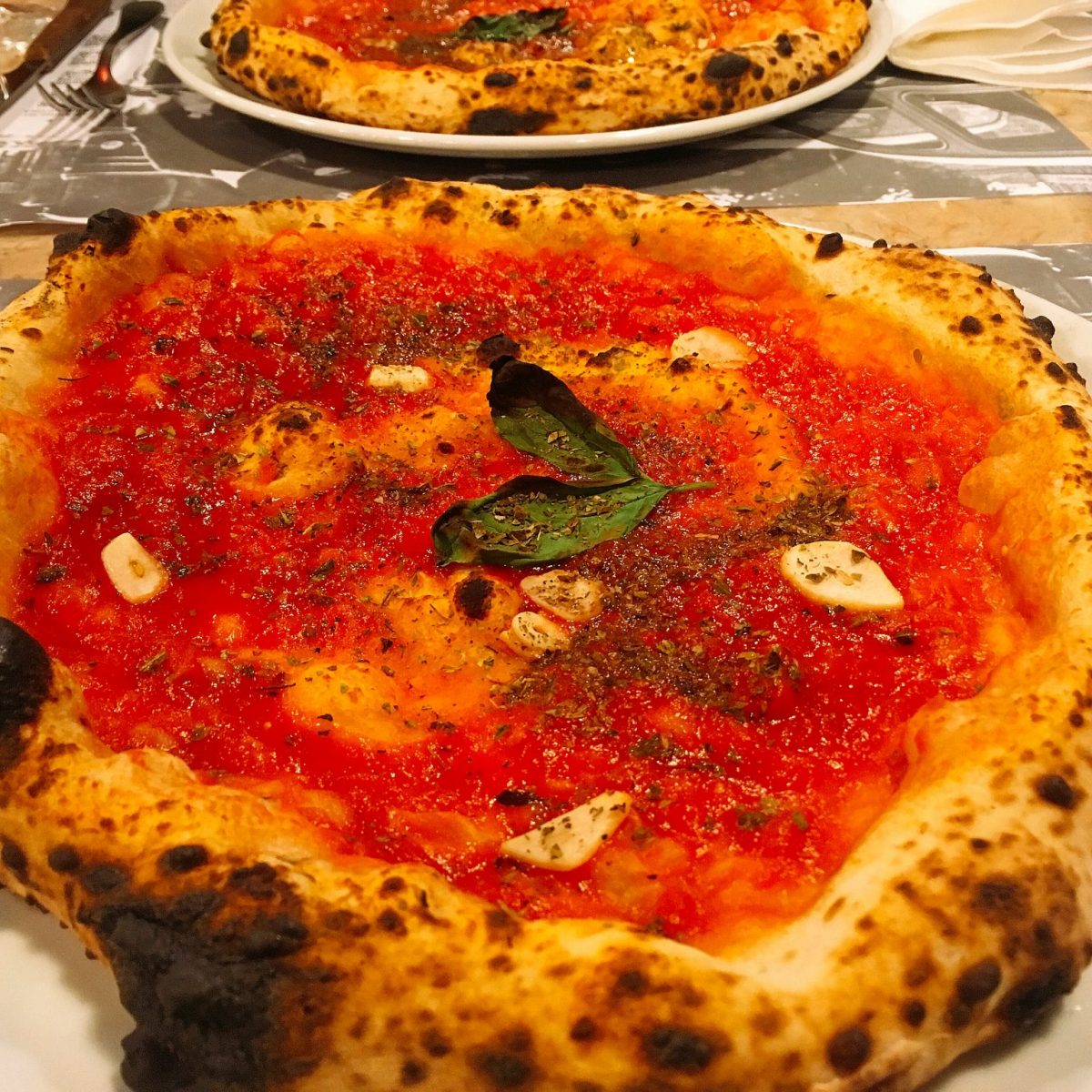 But there's so much more out there! The really fun part of eating in Italy is discovering the local specialities that can only be found in a particular region, city or town. And while there are vegan specialities to be found all throughout Italy, they definitely start multiplying as you head further south.

In search of the true plant-based soul of our favourite world cuisine, this time Nick and I went waaaay down south, all the way to the heel of the proverbial boot. In the 10 days we spent exploring the wonders of Puglia, with a quick dip into neighbouring Basilicata, these are just a few of the mouthwatering discoveries we made.

We're going way beyond the run-of-the-mill pasta and pizza options here. OK, so there's still some pasta thrown into the mix, and there's even one dish that sort of resembles a pizza. But there are also plenty of legumes, and quite a few leafy greens!

This is real Italian food. Healthy, hearty, no-nonsense food that will sustain a peasant during a long day of work tilling his fields. And yet, it's also food that's deemed fit to serve in a fine restaurant with linen tablecloths. These fruits of the land are a hallmark of southern Italy's culture and traditions, and one that its people are justly proud of. 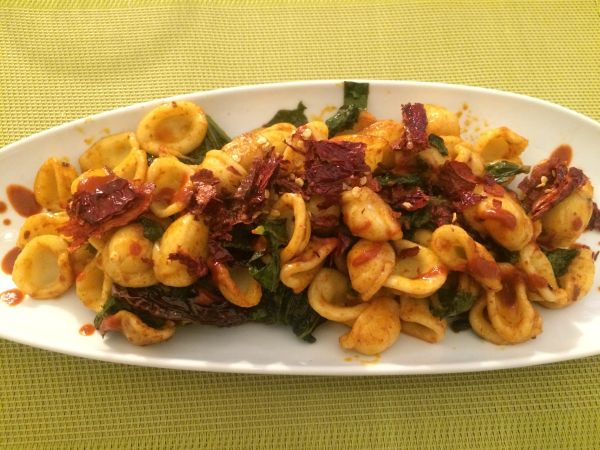 Orecchiette (literally “little ears”) are one of the most popular pasta shapes in the south of Italy, where they are still made by hand with semolina flour and water (no eggs!). A common way to serve them is tossed with broccoli rabe leaves (cime di rapa in Italian).

While in Puglia this dish is usually topped with anchovies (which can be omitted on request), in Basilicata you'll likely find them sprinkled with peperoni cruschi instead. These are dried, sweet peppers that can be eaten as a snack like potato chips! 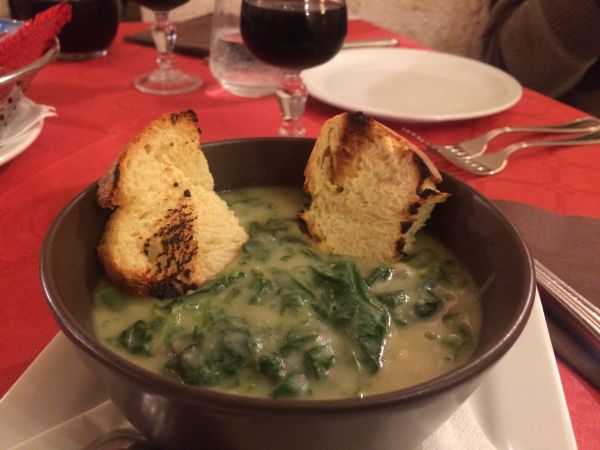 Often served at the start of a meal as an antipasto, this dish can also stand on its own as a primo piatto. Fava beans are blended into a purée and served with chicory leaves, sometimes with the two side by side, other times all mixed up together.

Recipes vary, so in some places the fava purée is thick like hummus, and in others it's much thinner, more like a soup. In all cases, though, it's bound to come with a side of crispy, toasted bread to dip into all that yumminess. 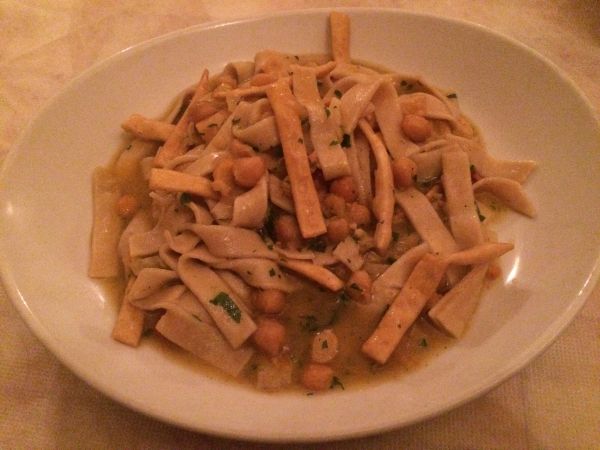 Tria is another type of pasta typically found in the south. Cut into long, thin strips, it's similar to tagliatelle. Except, you know, without the eggs, 'cause that's how southerners roll.

In this dish the tria are tossed with chickpeas in a simple vegetable broth-based sauce, but the real kicker is that, while most of the pasta is boiled as per normal, about a fourth of it is fried instead, until it's crispy and golden brown. How genius is that! 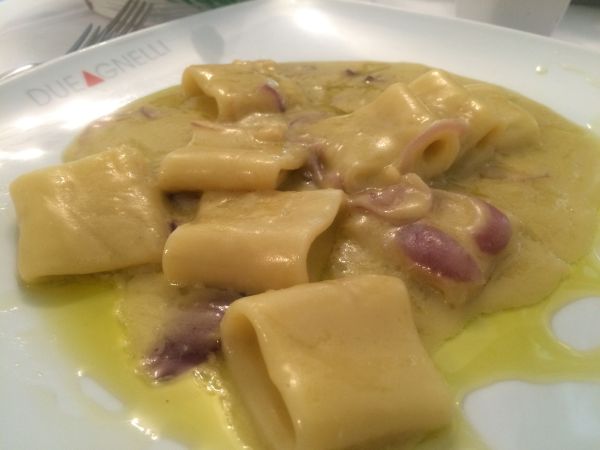 Remember fave e cicorie (No. 2 above)? OK, now take the fava bean purée, add some fried red onions, and pretend it's pasta sauce. Pour it over your favourite pasta and, ecco! You've got this plate of deliciousness.

While I do love to get my daily serving of leafy greens, if I'm being honest, I like fave served this way even better. Just be sure your bread bowl stays full until the end, because you'll want to mop up every last drop. 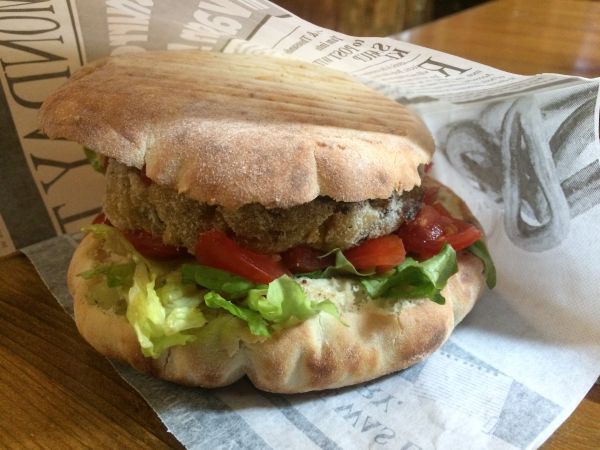 Italian street food at its finest, pucce (the plural form of puccia) are sandwiches made with a special type of bread baked in a wood-fired oven. The streets of Lecce and other cities and towns in Puglia are dotted with puccerie – sandwich shops specializing in this local type of take-away.

Fillings are limited only by your imagination. The one pictured here is from Andrew's in Lecce and is stuffed to the brim with eggplant, zucchini, lettuce, tomato and a vegan burger patty. 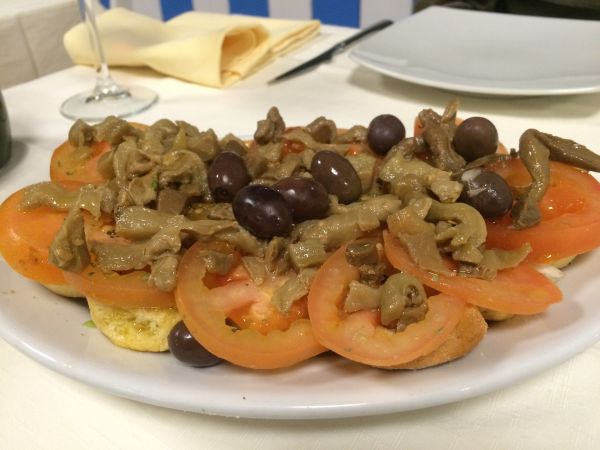 So, on the island of Crete in Greece they make this thing called dakos, which is basically barley rusks soaked in water and olive oil and topped with tomatoes and a type of locally-made cheese.

While travelling around Crete, I once ordered dakos without the cheese and was told that dakos without cheese is not dakos. Nope, it isn't. It's frisa! I was amazed to discover that southern Italy has virtually the same local speciality, except that they don't put cheese on it!

The most basic frisa (or frisella if the rusks are smaller) is topped with just tomatoes, salt and olive oil, but there are plenty of other possibilities. The one pictured here is stacked with olives, pickled eggplant and so many tomato slices that you can barely see the rusks underneath! 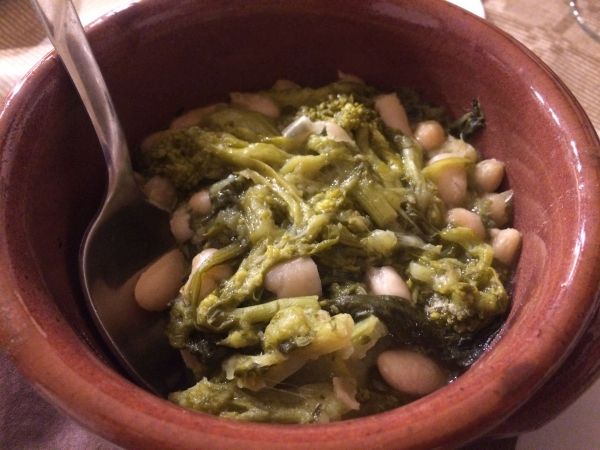 Here is yet another combination of those two nutritional powerhouses - leafy greens and legumes. This dish, popular in the city of Bari and in the surrounding seaside towns, is a simple combo of the ever-popular broccoli rabe and cannellini beans.

Whereas in orecchiette con cime di rapa it's usually only the leaves of the broccoli rabe that are included, in this dish the buds go into the mix to. This is the part that looks like a head of broccoli in miniature, but it has a taste that's all its own. 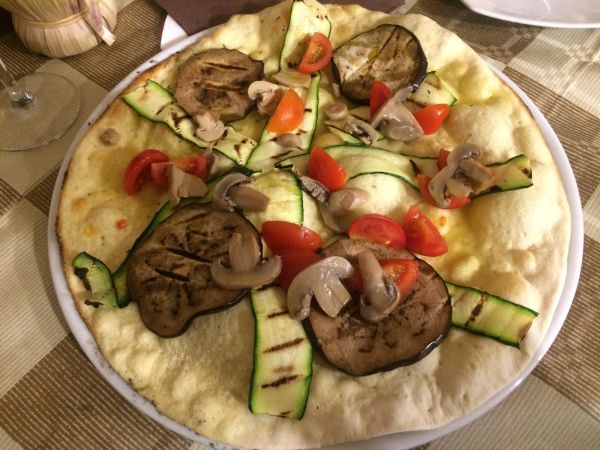 Here's another speciality from Bari and the surrounding area. Ciccio takes the simplicity of Mediterranean cuisine to a whole new level. Imagine a pizza as you know it, then take off all the toppings, the cheese, and the tomato sauce.

Stay with me here. Granted, if you ordered this at Pizza Hut, you'd have a big round pan of greasy, tasteless nothing. But when made with fresh, quality ingredients, a true Italian pizza base really can stand on its own with nothing but salt, oregano and olive oil!

That's the most basic recipe for ciccio anyway, but if you prefer you can add some of those toppings back on. The one pictured here was listed on a menu in Trani as ciccio vegetariano and was topped with grilled eggplant, zucchini, mushrooms and cherry tomatoes. 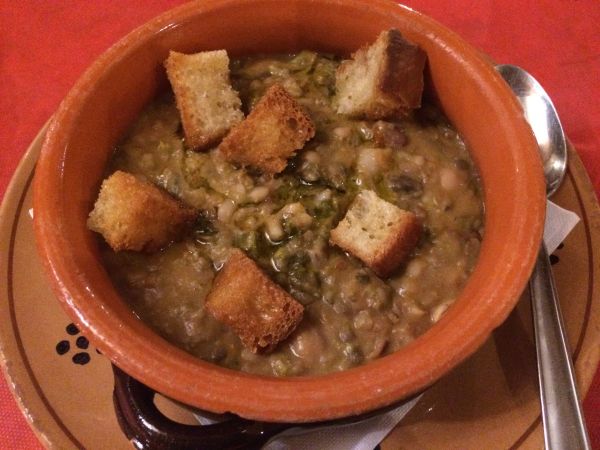 I bet you thought we were all done with greens and beans, didn't you? Nope! Ceca mariti is a hearty soup made from a whole grab bag of different legumes cooked with friarielli and served with fried bread. What are friarielli, you ask?

To be honest, I'm not sure whether there's any real difference between friarielli and cime di rapa (broccoli rabe). I've seen sources claiming they are the same thing, but I've also seen them sold as two separate items in the produce aisle.

I suspect that friarielli might be the very young, tender shoots of the plant. But leafy greens are an immense topic in the world of southern Italian cooking, so it's hard to keep track! Whatever they are, they're delicious. 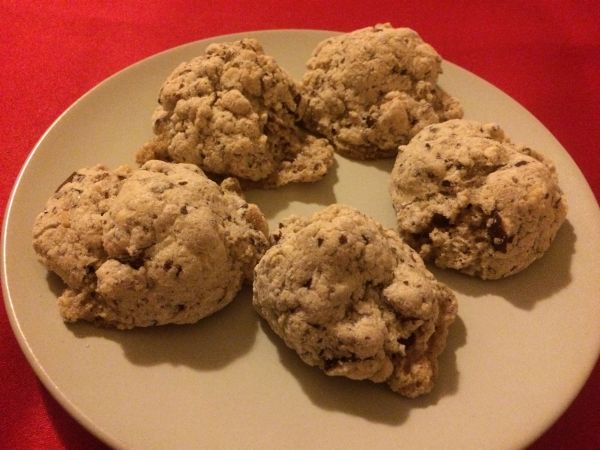 OK, enough with the savoury stuff, it's time to finish off this list with a little something for your sweet tooth. Strazzate are cookies from the extraordinary town of Matera in Basilicata, famous for its sassi cave dwellings.

These almond-flavoured cookies are traditionally eaten during the Christmas season. Their name is derived from a word meaning “to tear apart or mangle” and refers to their rather haphazard shape.

Hard and crunchy on the outside, soft and crumbly on the inside, these are sure to keep you coming back for more. Though you may see them made with chocolate, and/or with eggs, the ones pictures here contained neither. I have to say, a chocolate version does sound pretty good though! 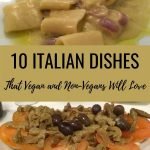 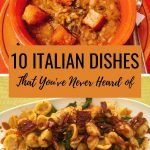