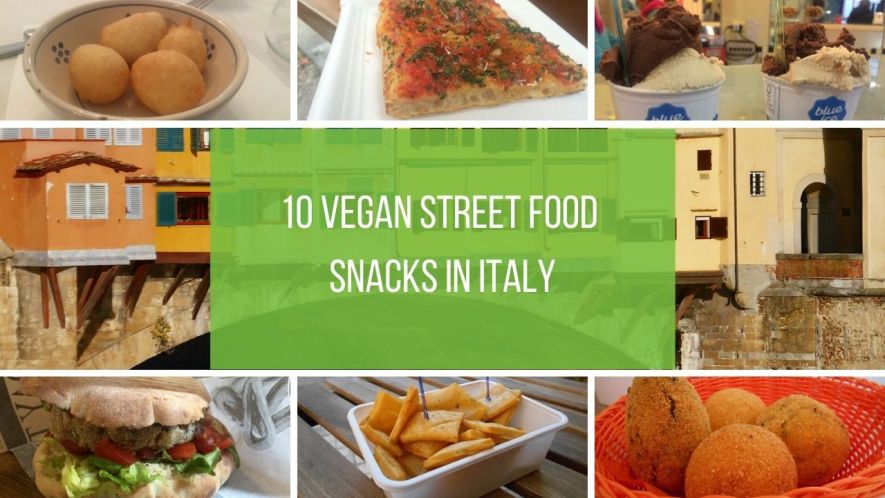 Sure, it's great to sit at a table with a red and white chequered tablecloth and be serenaded by a teenage accordion player as you dine al fresco. But what if you don't have the time, or the money, to eat all your meals in fancy restaurants while you're in Italy?

Don't worry, in addition to all the delicious vegan dishes on offer in Italian restaurants, the street food scene in Italy also includes plenty of vegan options that will keep you fueled while you're on the go.

Some of which are little-known Italian delicacies that you've probably never heard of. Put on your walking shoes. It's time to hit the cobblestones in search of delicious vegan street food snacks! 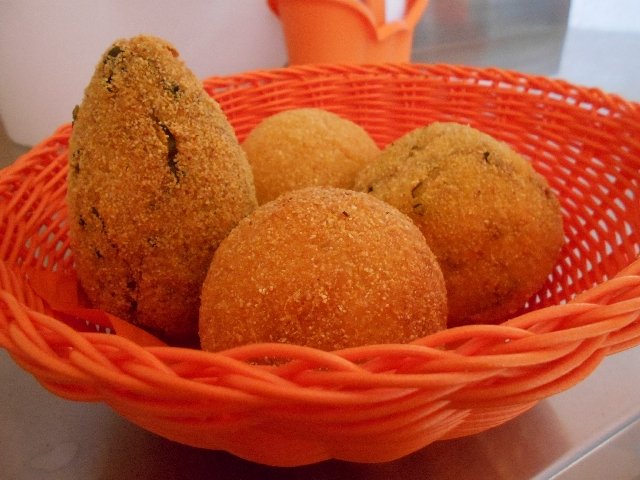 Their name means “little oranges”, and it's not hard to see why. Though their shape can vary from a perfectly round ball to something more like a cone, the fried breadcrumbs they are coated with do tend to give them an orange tinge.

Stuffed with rice and any other fillings you fancy, a batch of these is the perfect way to use up leftover risotto. While vegan fillings can be scarce on the ground, one place where you can definitely find them is Arancina, a veg-friendly eatery in Syracuse, Sicily. 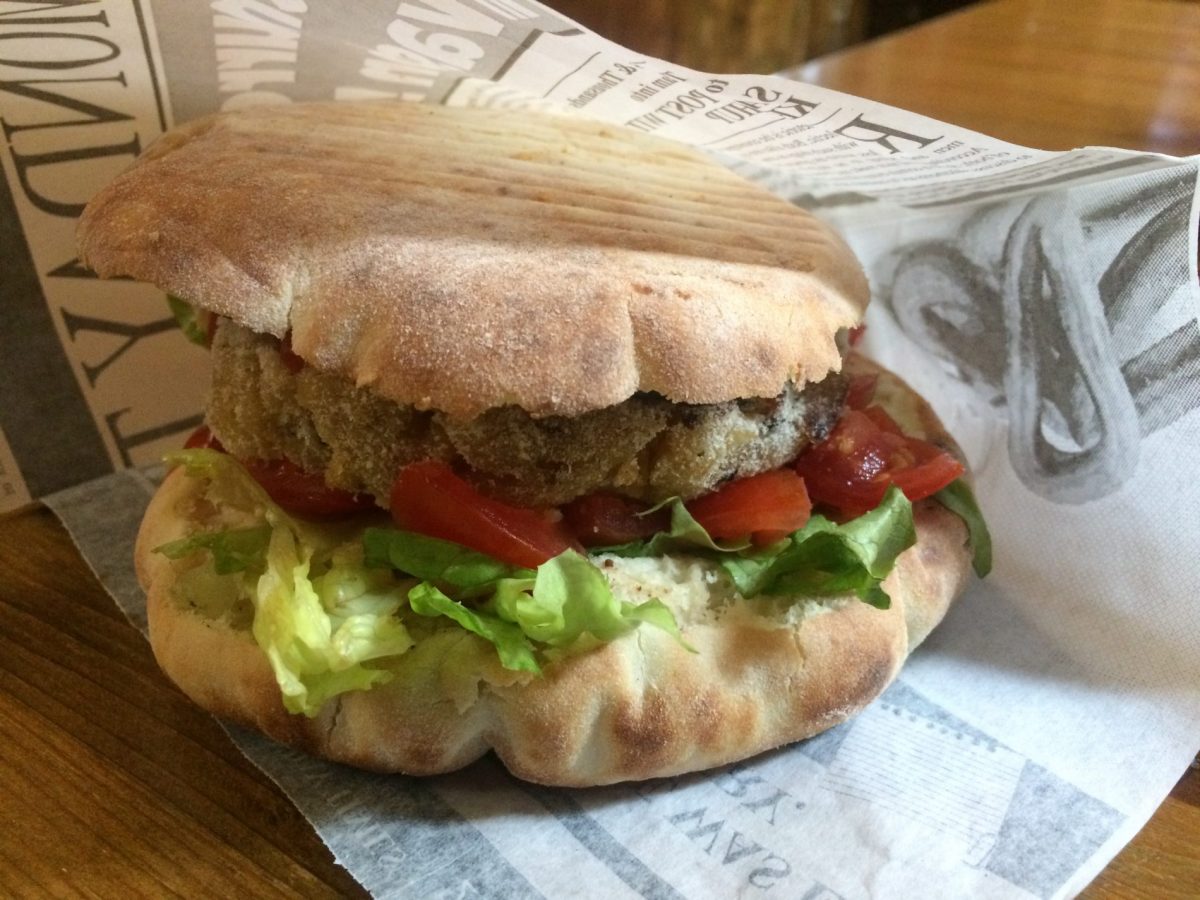 Puccia is a type of bread from the region of Puglia that is baked in a wood-fired oven. Crispy on the outside and hollow on the inside, they are the perfect shape and size for turning them into sandwiches.

And on the streets of towns and cities throughout Puglia, you will see establishments known as “puccerie” doing just that. Since they are made to order on the spot, you can ask for whatever fillings you like, so it's easy to make them vegan. And if you're in Lecce, head to Andrew's and order yours stuffed with a vegan burger patty!

Puccia is just one of the many vegan dishes in Puglian cuisine. In fact, it's safe to Puglia is the most vegan-friendly region in all of italy. 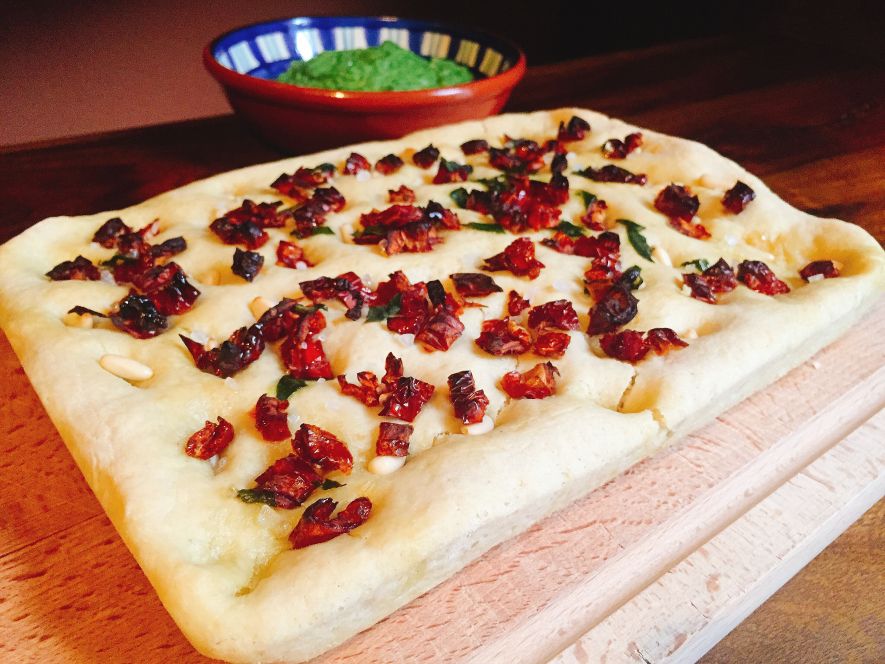 Focaccia comes in many forms, but my favorite is the fluffy kind with dimples made in Liguria.

While the most famous focaccia hails from Genoa in the coastal region of Liguria, this versatile oven-baked bread comes in all shapes and sizes. It can be thick and chewy or thin and crusty.

It can come plain with just rosemary and sea salt, or piled high with all kinds of toppings. And, while it's wonderful eaten plain, you can also slice it in half and stuff it with a filling of mushrooms, braised onions, artichokes...anything really.

The dough itself is about as simple as it gets and totally vegan, so just pick one with plant-based toppings or fillings and you're good to go. 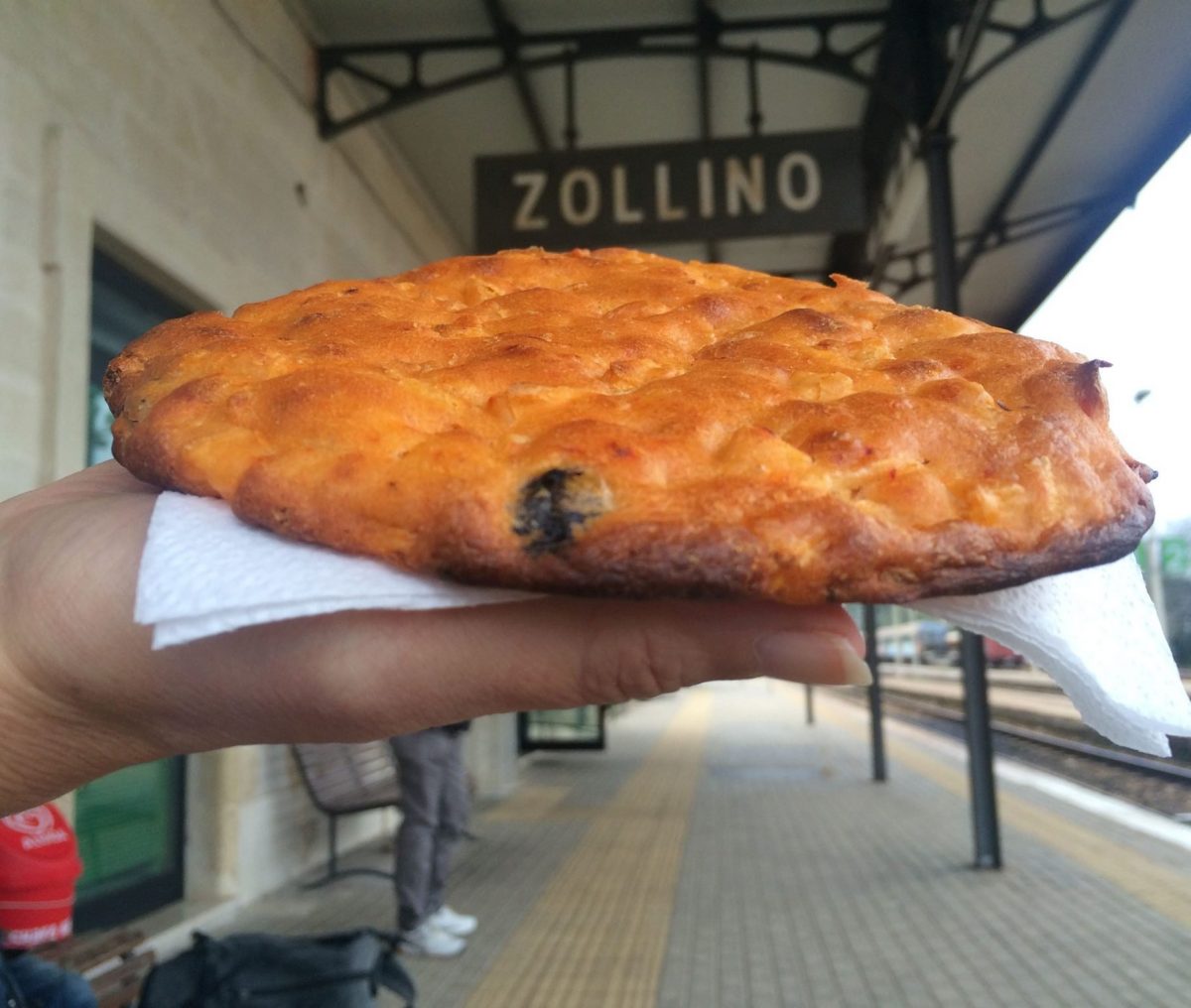 It's fun to compare the different forms of focaccia as you move from one region to another in Italy, but it's even more fun to seek out the local types of bread that are sold only in one town and nowhere else.

For example, there's a tiny town in Puglia called Zollino that's famous for its scéblasti – which in the local dialect means “shapeless”. It might not have much shape, but it's got plenty of flavour! More than just a piece of bread, really, this shapeless lump is packed with pumpkin, olives, onions, zucchini, peppers and capers.

Just be careful not to break a tooth on the olives, which are baked into the scéblasti whole, pits and all. 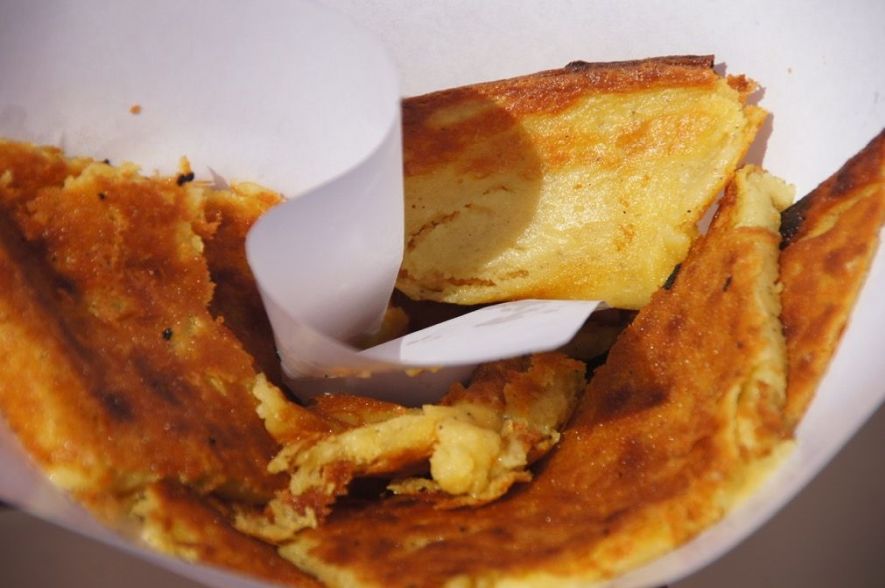 This thin chickpea pancake is eaten in Liguria and Tuscany as well as on the Côte d'Azur in neighboring France, where it is known as “socca”. This incredibly simple street fare can be made with just three ingredients: chickpea flour, water and olive oil. Which means that, not only is it vegan, it's also gluten-free!

While in Liguria it's usually cut into irregular slices and eaten by itself, in Tuscany, where this street food is known as cecina, it's stuffed into small focaccie or between two slices of bread and eaten as a sandwich. 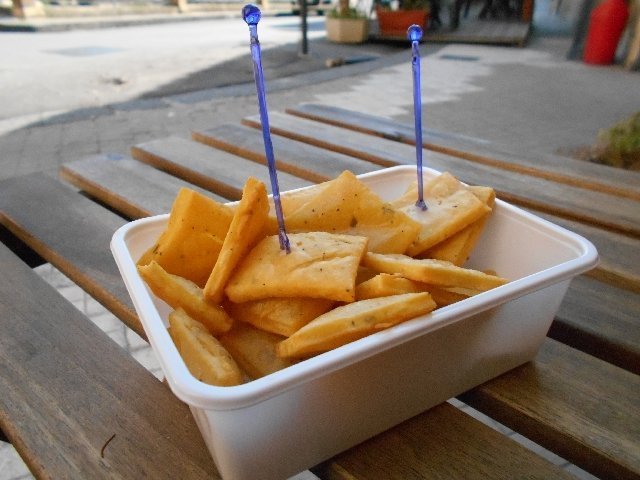 Similar to the farinata found in the North, panelle is the Sicilian take on chickpea flour snacks, which in this version is fried into fritters rather than baked. The chickpea flour is mixed with water and cooked into a polenta-like porridge before being cooled and allowed to set, then cut into pieces and fried in olive oil.

Like its northern counterpart, panelle can be eaten on its own or stuffed between slices of bread and served as a sandwich. This vegan street food snack is particularly popular in Palermo but can be found throughout the island of Sicily. 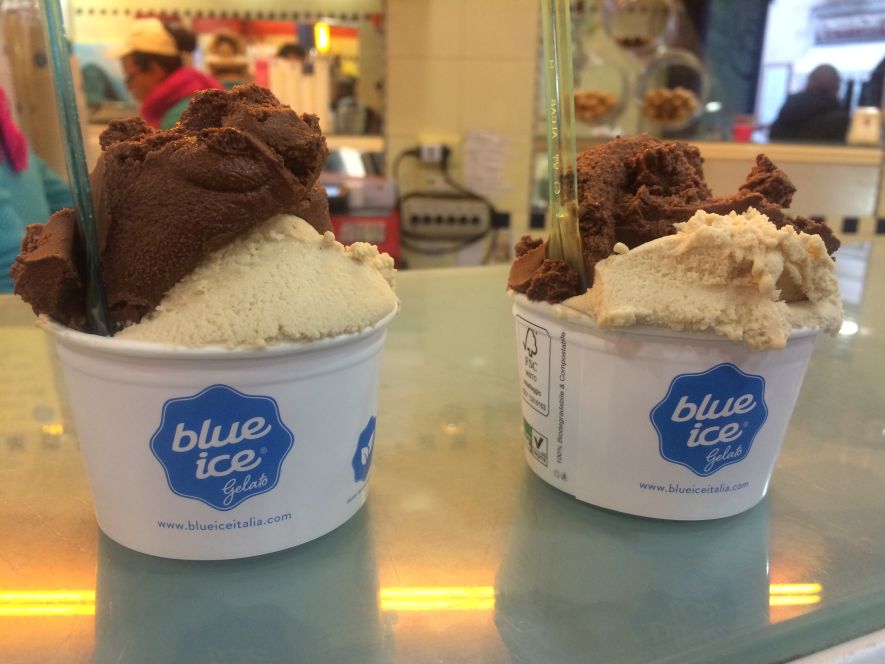 What better way to wander the streets of Italy on a hot summer's day than with a cone of sweet, fruity gelato in hand? You might assume that ice cream is a no-go for vegans, but not so fast!

The fruit-based flavors of gelato are almost always sorbets, which means they are made only with fresh fruit, water and sugar.

And, with the growing demand for more dairy-free choices, many gelaterie now offer soy versions of some of their non-fruit flavors too. There's even a 100% vegan gelateria in Rome!

Here's a more in-depth answer to the question: "Is gelato vegan?". 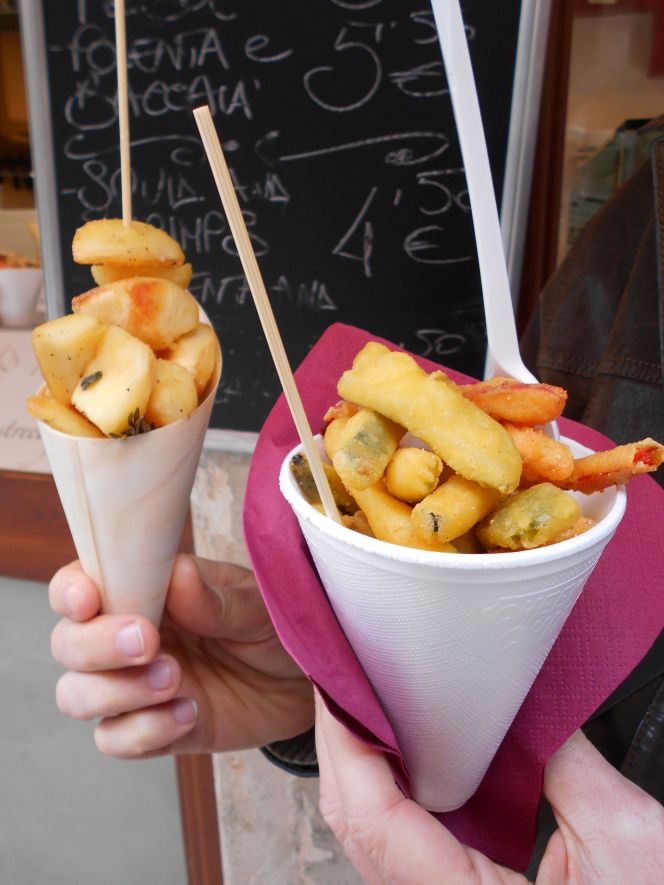 Underneath all that veggie tempura, this cone is filled with creamy polenta!

You might be wondering how polenta could possibly be a street food snack. Isn't it all gloopy and messy and has to be served on a plate? Nope! It also comes in cones!

In some of the more northern regions of Italy, polenta is an essential staple and is eaten much more frequently than pasta. That being the case, it should come as no surprise that the locals have found a way to take polenta with them on the go. Acqua & Mais is a vegan-friendly eatery in Venice that does a roaring trade in the stuff.

Their name means "water and corn", which is exactly what polenta is made of. Have it topped with beans in tomato sauce, soy meatballs, or fried and battered vegetables. Ask which vegan toppings are available when ordering.

Another good place for polenta on the go is an Italian chain called PolentOne. It started in Bergamo and now has branches in several northern Italian cities, and even a branch in Barcelona. 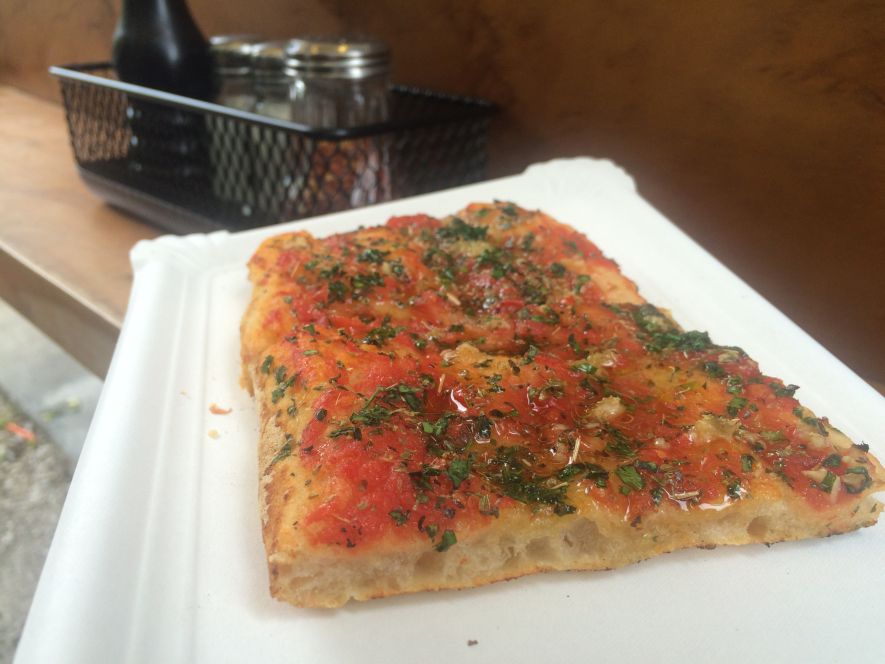 The Neapolitans get credit for inventing pizza, but it was the Romans who figured out that you could serve it “by the slice”. Pizzas served in restaurants are round and generally considered to be a single serving size for one (hungry) person.

But in pizza al taglio places, they are baked in large, rectangular trays and are sold by weight, so you can ask the pizzaiolo to cut a slice as large or small as you like.

Since they are pre-made, you can't just order one without cheese like you can in a restaurant. That's generally not a problem though, as you will often find cheeseless, vegan pizzas on offer anyway.

Some of the simplest and most common types are pizza rossa (with only tomato sauce) and pizza bianca (with olive oil, rosemary and garlic). Indeed, the line between focaccia and pizza is somewhat blurry, and you can generally find both in a pizza al taglio establishment.

The pizza al taglio craze started in Rome, but you can now find it all across Italy. Although it must be said that in Naples most people prefer the large, round pizzas.

If Neapolitans want a snack to eat on the go, they just fold a round pizza on top of itself and wrap it up in some paper. It's called pizza a portafoglio, which means "wallet pizza". 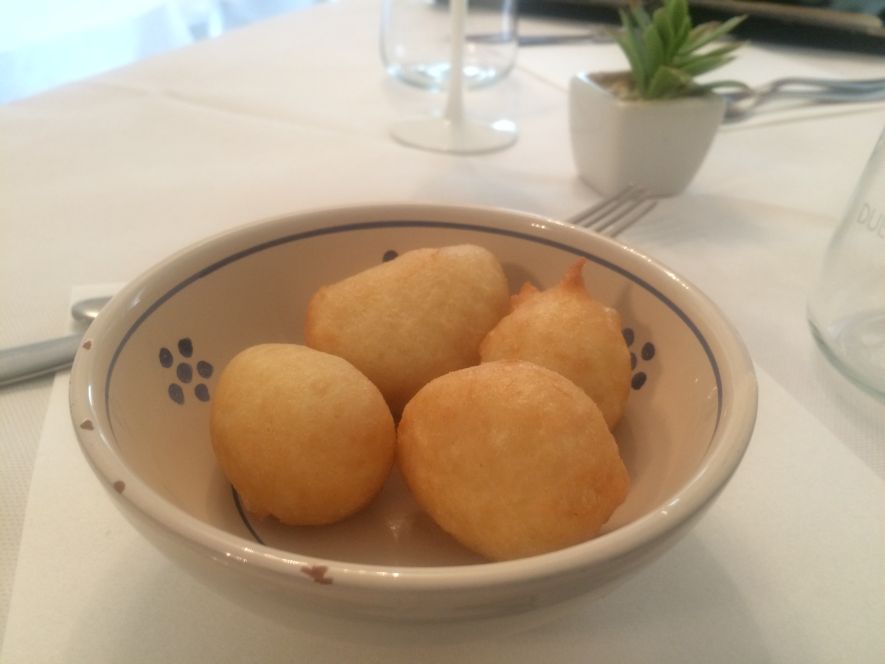 Whether they're savory or sweet, it's hard to go wrong with fried balls of dough!

Pettole are a festive snack eaten around Christmas time and during other holiday periods, particularly in the south of Italy. They are basically doughnut holes, a.k.a fried batter, but unlike doughnuts they come in both sweet and savory versions.

In their simplest form, they are made with just flour, water and oil, though savory ones might also include extras like olives or sun-dried tomatoes. If you prefer your pettole sweet, look for the ones that have been dipped in sugar, jam or vin cotto – a thick, concentrated grape juice. 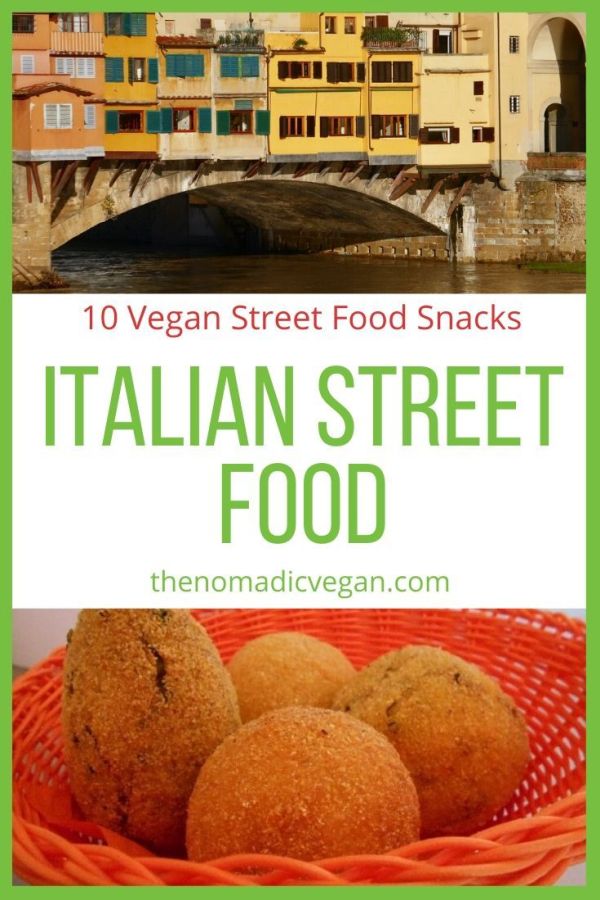 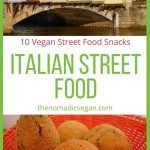 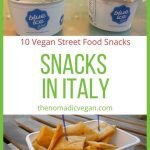 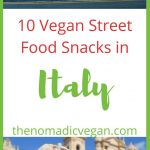 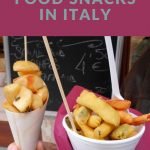