A Vegetarian Oasis in Cáceres

After Plasencia, the next stop on our tour of the Extramadura region in Spain was Cáceres. The old part of town is referred to as the “monumental city”, and indeed the streets of its historic core are lined on both sides with truly monumental palaces, churches, towers and stone archways. 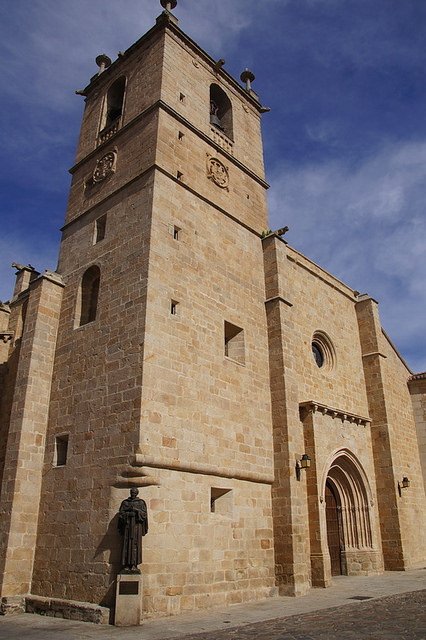 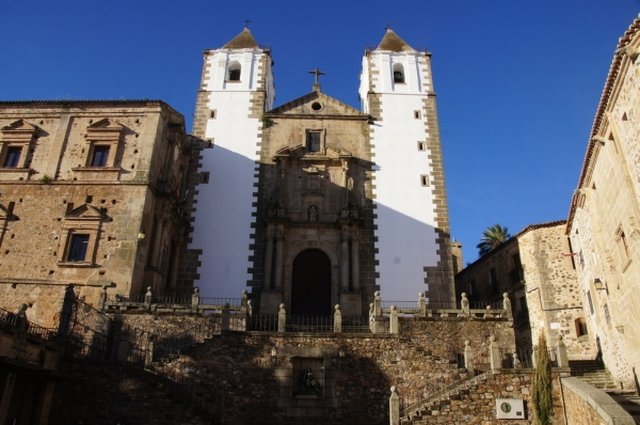 Its church towers not only provide a home for nesting storks, they are also a great vantage point from which to view the town. 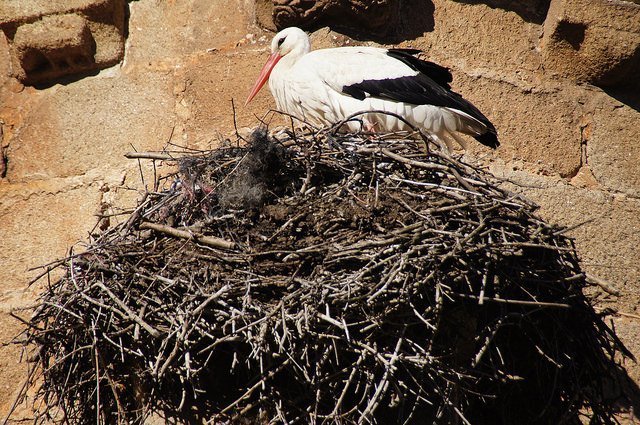 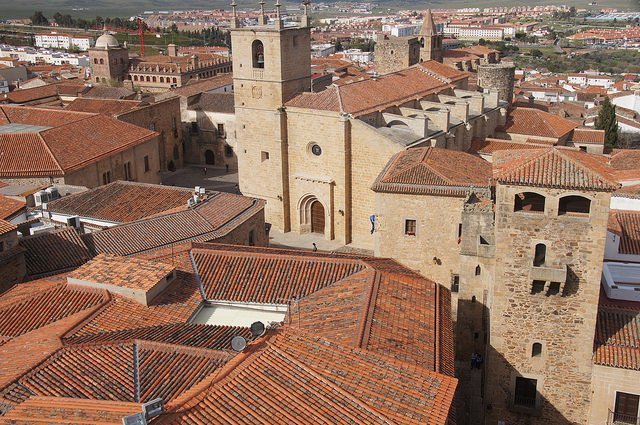 Having arrived in Cáceres around 3 p.m., which is a perfectly normal time for Spaniards to eat lunch but still felt very late for us, we dropped our bags off at our guesthouse and ducked into the first restaurant we saw that didn’t seem to focus exclusively on grilled meats. The Restaurante Centro is a no-nonsense kind of place where locals go for a cheap and filling meal. The menu is extensive and includes several vegan or easily veganized options. For our first course, Nick had the gazpacho while I chose the crema de verduras. Despite the name, this thick and hearty soup does not contain any cream, just a variety of vegetables blended together. 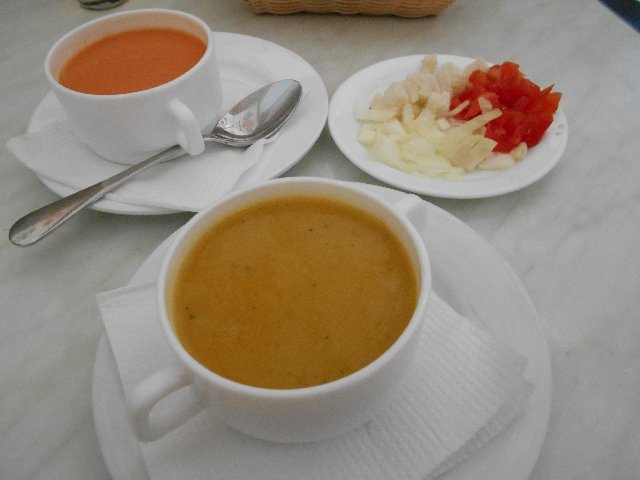 As my second course I had the pisto with rice – a dish of mixed vegetables in tomato sauce that is very similar to the ratatouille found in Southern France. In Spain this dish is often served topped with an egg, so naturally I asked for it without. The waiter responded by pointing to Nick and saying, “But he can just eat the egg, can’t he?” I tried to explain as best I could that, not only did I not want to eat animal products myself, I also did not want to be responsible for their consumption by ordering them for other people to eat. I’m not sure the waiter understood my moral stance, but in any case I was happy to see that my pisto arrived sans egg. While I enjoyed the crema de verduras, I found the pisto to be just so-so, and in fact it was very similar to the canned ratatouille that I sometimes buy from my local supermarket in Geneva. But hey, the price was right, and we were hungry. 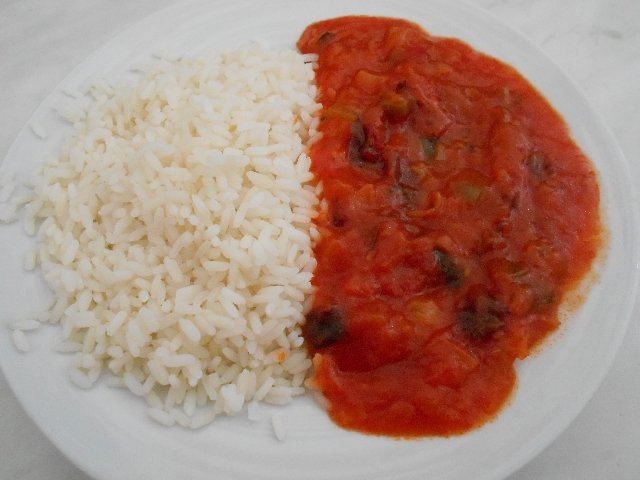 For dinner we headed to Brotes Verdes – a new vegetarian restaurant that opened in November 2014. This was definitely a step up in quality from the Restaurante Centro! It’s a cozy and inviting place decorated in a bright shade of green, with plenty of live plants hanging on the walls. The menu includes several vegan and gluten-free options, both of which are clearly marked. Changing daily menus are available for lunch for a very reasonable price, while for a few euros more you can get a menú vegano in the evening. This was what Nick chose, and it included a couscous salad, two pumpkin croquetas, two falafel balls, a yoghurt dipping sauce, a veggie burger and a drink. 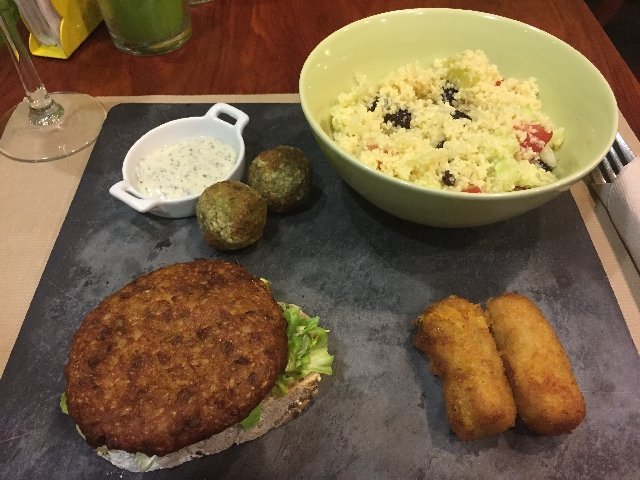 This is a great choice if you want to sample a number of different things from the menu, but since I didn’t really feel like a burger I opted for the moussaka instead. This is something that has been on my list of things to veganize ever since we returned from our trip to Greece, but the guys at Brotes Verdes beat me to it. To be honest, I don’t really think their version resembles the original Greek dish all that closely, but I thoroughly enjoyed it nonetheless. It consisted of a creamy mix of eggplant, garlic, onion, carrots, peppers and tomato topped with a vegan bechamel sauce. 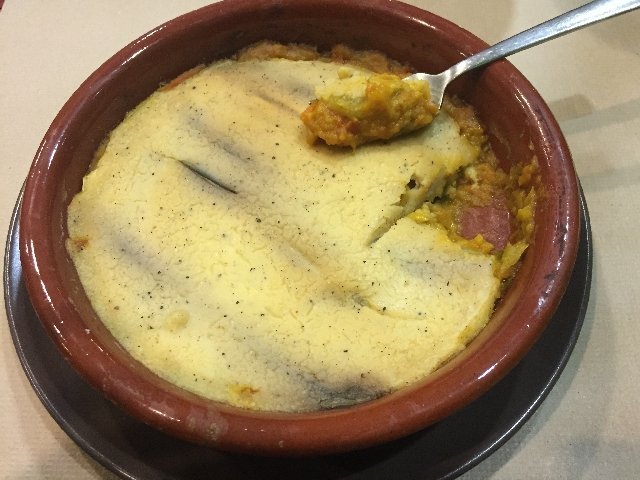 I had also planned to order a half portion of the pumpkin croquetas (I was a bit obsessed with croquetas on this trip), but the waiter advised me that the moussaka came in a very large portion and that I most likely wouldn’t need to order anything more than that. I appreciated his honesty, but at the same time I still really wanted the croquetas, so in the end I ordered them to take away and ate them on the bus to Trujillo the next day. He even gave me some of the yoghurt dipping sauce to go along with them, which was to die for.

The dessert offerings change regularly; the day we were there the vegan dessert on offer was a carrot and walnut cake, which was quite moist and scrumptious. 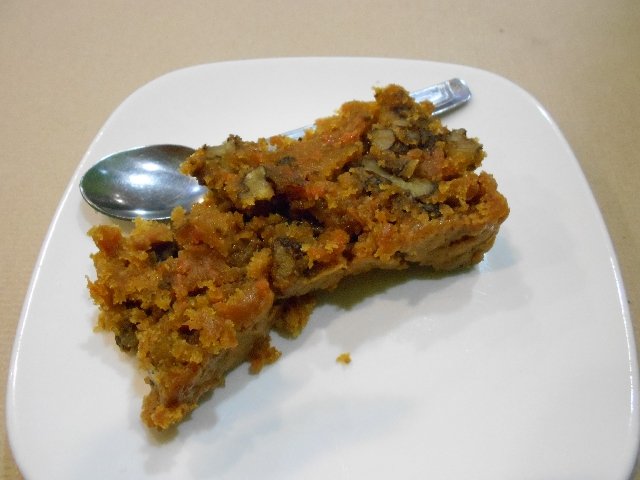 Brotes Verdes was a wonderful vegetarian oasis in a part of the world that is filled with constant reminders of animals’ suffering. And it was heartening to see that it’s attracting locals who are not very familiar with the vegetarian or vegan lifestyle.

While waiting for our food, I overheard our waiter answering questions from a family seated at a nearby table. He was explaining the difference between what vegetarians eat and what vegans eat, and he even mentioned fruitarians as well.

The kids at the table were pretty blown away when they heard that there are people in the world who only eat fruit. Though to be fair, I find this hard to grasp myself. In any case, Brotes Verdes is just one more example of how the vegan movement is spreading to even the most unlikely corners of the globe. If you’re ever in the area, please show them your support!