Home Athens Athens and the Inescapable Allure of Avocado

Athens and the Inescapable Allure of Avocado 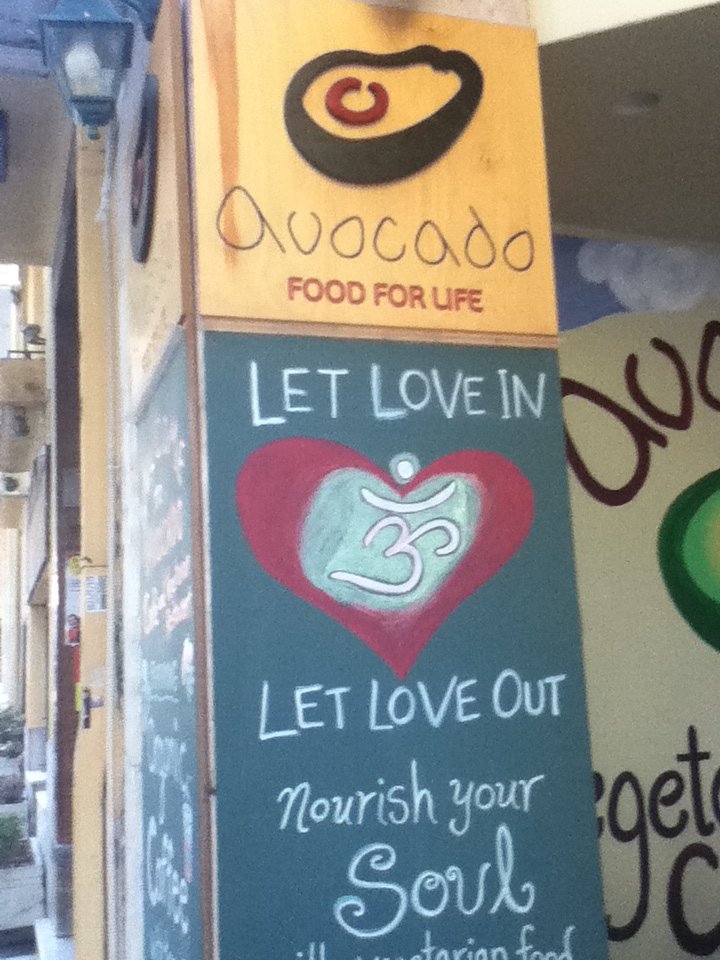 Our Greek adventure got off to a delicious start on our first day in Athens. We stayed at the Hotel Arethusa in the Syntagma area. This is a pretty good choice if you’re flying into Athens late at night, because it’s very close to the airport bus drop-off point and the reception is open 24 hours. Unlike most of the hotels we stayed at in Greece, it also has an extensive breakfast buffet. The buffet offered plenty of vegan options, like muesli with fruit topping that included not just canned peaches and Macedonian salad but also fresh fruit like watermelon and grapes. There were some nice jams to spread on whole wheat sesame bread, and some Greek additions to the usual fare that I would not typically think of as breakfast items, such as tomatoes, cucumbers and olives.

The best thing about Hotel Arethusa, though, is that it’s just around the corner from my favourite restaurant in all of Athens – Avocado! Now, I have to be honest and tell you that, apart from our last dinner, when we met up with some friends, we ate ALL of our meals at Avocado the whole time we were in Athens. So, it’s true I don’t have much to compare it with, but honestly, the food was so good that we didn’t want to go anywhere else. The staff were all super friendly and helpful, and everything I had was delicious. It’s fully vegetarian, and vegan items are clearly marked on the menu, as are wheat-free and gluten-free items. There is also an organic/health food store right next door where you can stock up on fruit and veg, energy bars, etc. 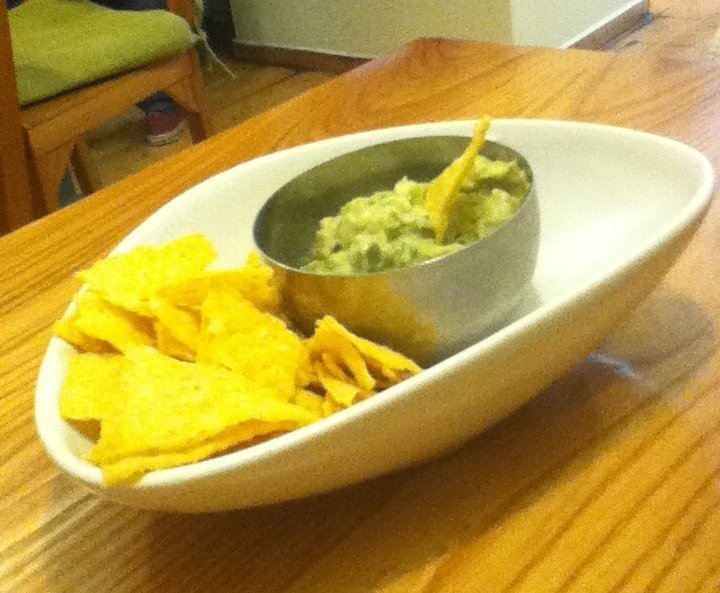 The first time we ate there, even though we didn’t order an appetizer they gave us some guacamole and tortilla chips on the house to make up for the fact that they accidentally made Nick’s pizza with white instead of whole wheat crust, which meant we had to wait an extra five minutes while they remade it. This was sooo not a big deal, and we never even would have known about the mistake if they hadn’t told us, but hey, I’m certainly not one to turn down free guacamole! 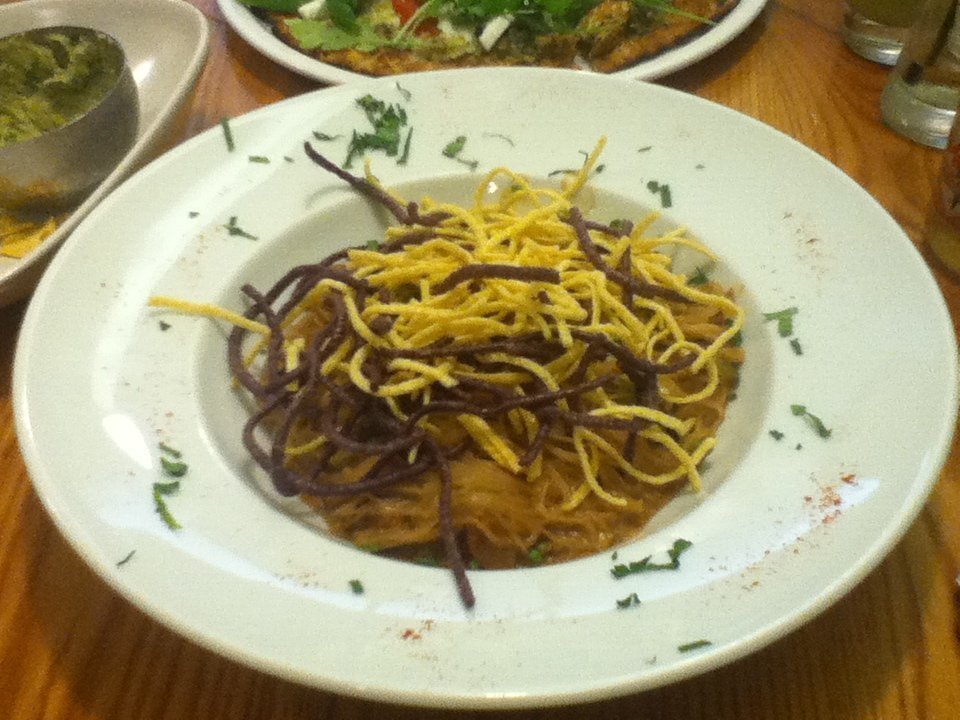 I chose the Zen Tempeh as my main dish, which consisted of thin, organic rice noodles with tempeh cubes, fresh snow peas, ginger, celery and a delicious creamy red curry sauce (the fried yellow and purple noodles on top are more of a garnish than anything else). This was actually the first time in my life I had ever eaten tempeh. I was never much of a meat eater even in my omnivorous days, so when I went vegetarian (and ultimately vegan) I didn’t really feel the need to use so-called fake meats or meat substitutes, and in my mind, I had labeled tempeh as one of these. I now realize this was unfair and inaccurate. Much like tofu in China, in Indonesia tempeh is a traditional food that is eaten by everyone, not just vegetarians looking to simulate the texture of meat. It undergoes very little processing and is also a fermented food, so it contains lots of probiotics that are great for the digestive system. And, since I recently found a health food store in Geneva that sells tempeh, I’m looking forward to cooking with it in the future. This dish definitely whet my appetite for it! 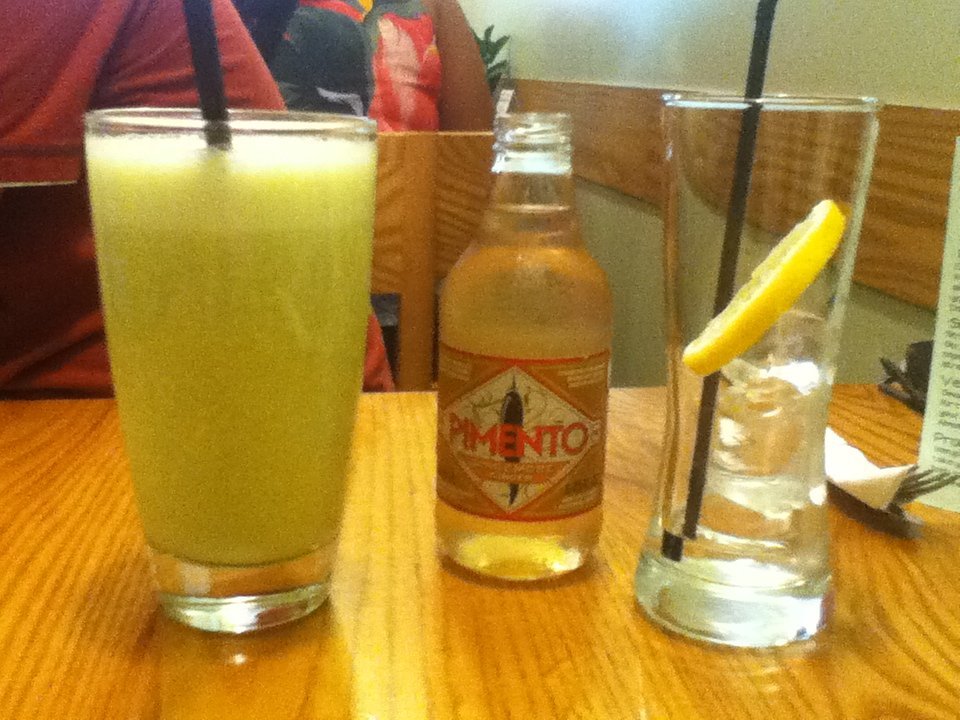 This beautiful meal was washed down with a spicy ginger ale called Pimento (pictured here with a juice Nick ordered). I rarely drink soft drinks these days, but ginger ale brings back memories of our trip to East Africa in 2010. There was a brand sold there called Stoney Tangawizi that I just couldn’t get enough of, and now when I taste ginger ale I am transported back to those breezy, balmy nights in Zanzibar. The server at Avocado warned me that this one was quite spicy, and it definitely did have a kick to it that kind of lingers in the back of your throat, but for me that’s part of the appeal of ginger ale. I like that it doesn’t taste sickeningly sweet like most soft drinks.

Since we were catching a flight to Rhodes that evening and knew we would arrive there pretty late, we decided to order more food from Avocado to take away and eat for dinner. This time I chose one of the specials – the Macro Salad. It is so named because it’s meant to be in line with the principles of a macrobiotic diet.

Now I don’t know much about macrobiotics, apart from what I learned from Alicia Silverstone’s The Kind Diet, but I did notice that this salad contained some of the same ingredients that tend to feature a lot in Alicia’s superhero recipes, like daikon, lots of dark leafy greens, and…oh yeah, tempeh.

I really seem to be embracing this whole tempeh, as the Macro Salad was topped with five large strips of it. I couldn’t wait to eat it, so I whipped it out as soon as we boarded the plane, and I took the last bite just as the stewardess was starting her safety demonstration. OK, so maybe I should work on my mindful eating habits in the future, but it was still delicious even though I scarfed it down before we even took off. And before I could take a photo of it. Sorry about that. 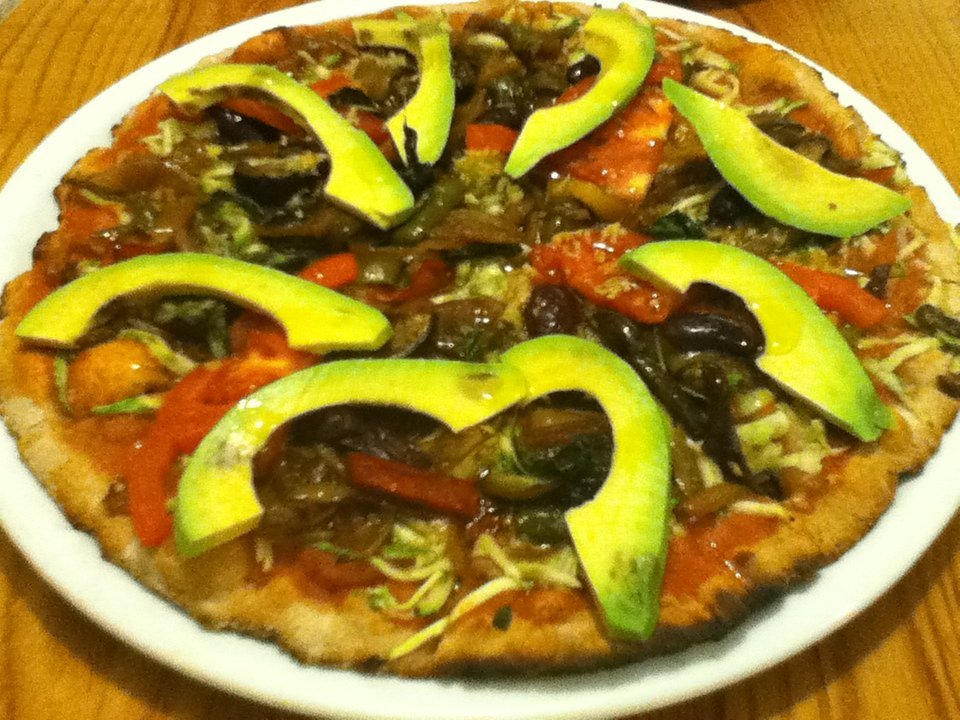 Our next visit to Athens was about midway through our trip and marked our transition from island travel to mainland travel. We arrived just in time for dinner and headed to…you guessed it, Avocado! This time I chose the Vibrant Vegan pizza, which was fantastic, assuming you don’t mind large quantities of olive oil. The crust was made from whole wheat flour, and it was absolutely packed with tomatoes, Kalamata olives and all sorts of veggies, which were then topped with slices of fresh avocado. I had never thought of putting avocado on pizza before, but it definitely works. Something to remember for the future. With all that veggie goodness, there was no need (or room) for cheese on this pizza. 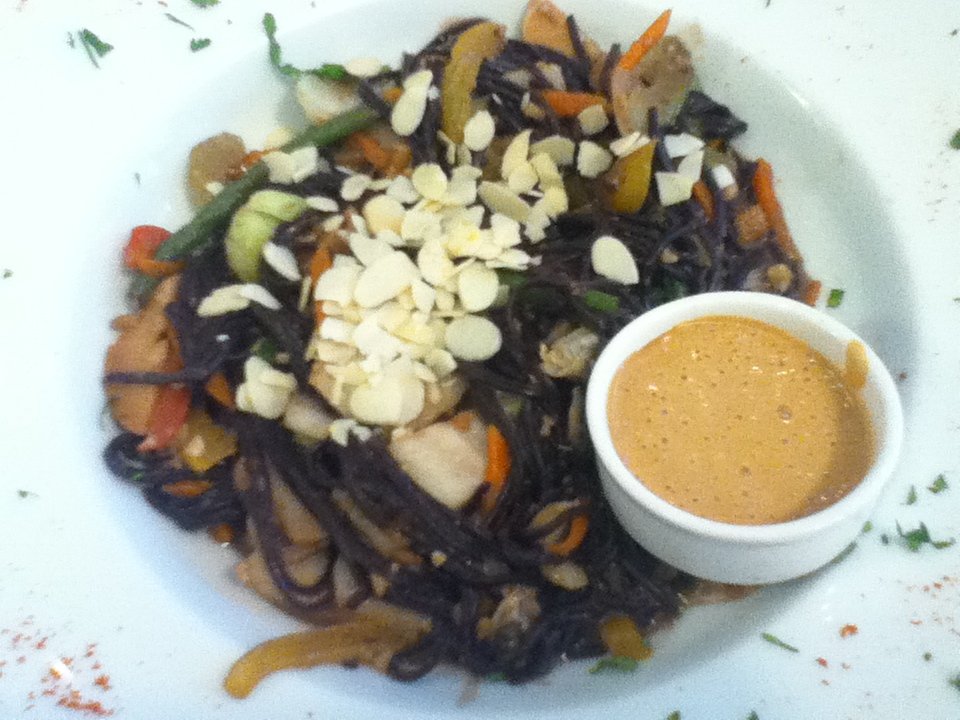 During our third and final stay in Athens we went back to Avocado again. And again. And again. While I couldn’t resist ordering some of my favorites from our previous visits, I did manage to try a couple of new dishes too, like the Atma Hari. The menu describes it as a jubilant mix of long beans, peppers, baby corn, carrots, ginger, Chinese cabbage, chestnuts, bamboo, roasted almonds and peanuts on a bed of organic black rice noodles. Delicious! The taste of the sauce and the noodles was actually quite similar to the Zen Tempeh, though of course, the toppings were different. 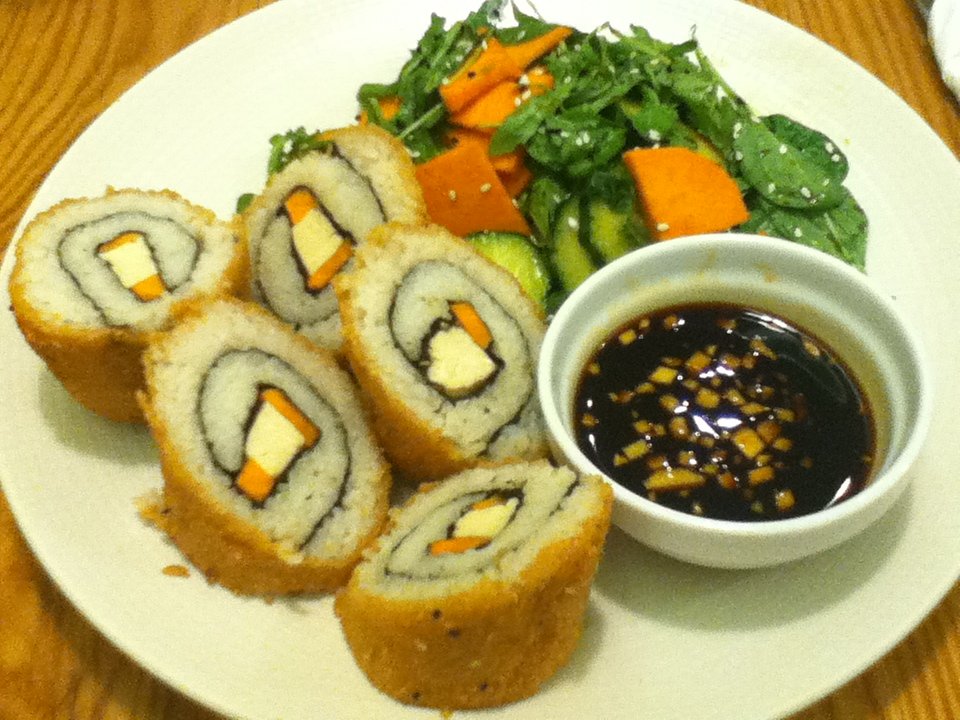 And then there was the Basmati Sushi, which was from the specials menu. Sushi is quite possibly my favourite food in the world. If I had to eat one dish for the rest of my life, sushi would be it. Now, this is certainly not your traditional sushi; there’s no pickled ginger, no wasabi, and it wasn’t served with chopsticks. I admit it felt pretty strange to eat sushi with a fork, and the rolls were so large that I had to cut them up into smaller pieces to eat them, which also felt just not quite right. But if you stop expecting it to be sushi and just accept it for what it is – a creative, Western remake of a traditional Japanese dish – then it’s actually quite wonderful. The rolls were filled with marinated tofu, carrots and basmati rice rolled in nori, and they appeared to have been fried in a light batter. This was served with a salad of baby spinach, cucumber, ginger and sweet potato, topped with organic soya-sesame oil dressing. 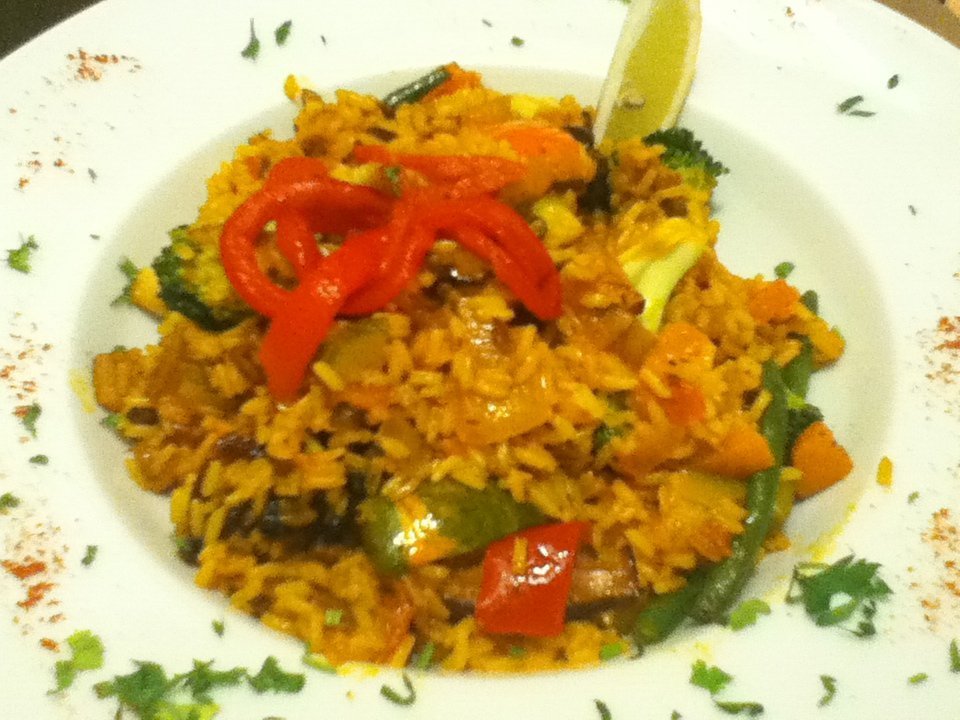 And finally, although I didn’t order this myself, I thought I would share a vegan dish Nick ordered at Avocado – the Viva Paella. This was a vegan version of the traditional Spanish dish and was made with a variety of vegetables, oven-roasted squash, nori and mushrooms in a saffron vegetable broth. I must say I’ve never been a huge fan of paella, but I definitely liked the bite I had of this one.

Now, admittedly, none of these are typical Greek dishes, but such a wonderful vegetarian restaurant was just too good to pass up, especially considering that, as far as I know, there are no vegetarian or vegan restaurants outside of Athens. But fear not, there will be a plethora of (naturally vegan!) traditional Greek fare in upcoming posts. Stay tuned!