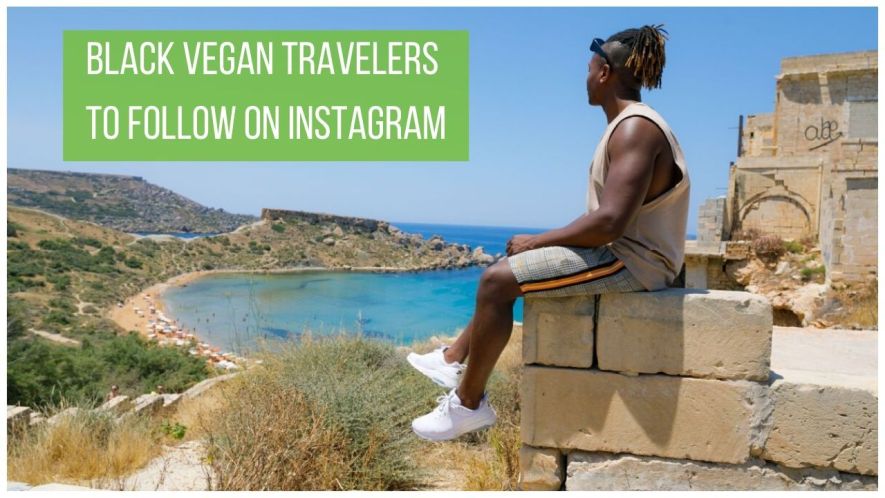 Black people are seriously underrepresented in both the vegan community and the travel community.

And as for Black vegan travel influencers??? They're practically invisible. All of this is especially concerning when you consider that Black people are the fastest growing demographic in the vegan community.

Their numbers are multiplying quickly, so why aren't they more visible? It's time they get the recognition they deserve. Check out these awesome Black vegans sharing their vegan adventures around the world on Instagram.

Joi Liayé is a plant-based world explorer based in Los Angeles. She’s been vegan for about eight years. Her food photography is absolutely gorgeous, and so is she.

On her feed you’ll find food recommendations from Ecuador, Indonesia, Jamaica, the USA and more. Also check out her other account, @joiliaye for gorgeous Instagram-model shot.

Khadijah is a vegan traveling mother of two from Brooklyn, New York. She also has a YouTube channel, where she makes videos about budget-friendly, vegan-friendly and culturally inclusive travel. Khadijah covers USA and international destinations such as Spain and Iceland.

Kemoy is an island girl born and raised in the Caribbean. She has been veg*n for 20 years and lives in Virginia, USA.

She’s a mother of two vegan children and advocates for sustainable living. Her posts include tips on travel in Panama, Peru and France. Also check out her other account, @fearlesslylivinggreen.

My passion for food has lead me around the world seeking authentic, traditional dishes suitable for a plant based eater. Today my journey has brought me to the most recognized and lavish city in the Middle East, Dubai. Dubai is the most populous city in the United Arab Emirates at 3.1 million but surprising 85% of the population is non-UAE nationals with majority including Indian, Pakistani, Bangladeshi and Filipino nationalities. This mashup of cultures, in a cosmopolitan city, enables a diverse selection of dishes from their respective motherlands and a haven for foodie lovers like myself. Here I am indulging in a bowl of veggie noodles from @restaurants_by_thelandmark at 2am after a red-eye flight.📍Dubai, United Arab Emirates 🇦🇪

Dom Ceja loves doing in-depth research to discover vegan dishes in the cuisines of the countries he visits. It’s a passion that he and I share.

His knowledge of vegan Georgian cuisine really helped me out a lot when I was traveling through Russia. Be sure to check out his YouTube channel, where you’ll find videos on vegan food in the Middle East and the Caucuses.

Whereas the rest of the accounts in this list are clearly run by an individual, this is the only one that doesn’t really seem to have a single name or face behind it.

Instead, it’s more of a collective effort to highlight Black-owned vegan restaurants, pop-ups, caterers, chefs and other businesses worldwide, with a particular focus on Caribbean and African countries. There’s also an ItalNomad Facebook group that you can join to connect with like-minded people and perhaps meet up with them during your travels.

And check out the Ital Nomad world map to see all these Black-owned vegan businesses at a glance.

I had the pleasure of meeting Kali when she joined the vegan tours of Portugal and Italy that I led in collaboration with Veg Jaunts and Journeys. Since then, she's also been on a vegan tour of Scotland, and she travels quite a bit around the US as well.

In fact, Kali is a traveling nurse who lives out of her van with her black two cats, Zeus and Zena.

Travelling while Black & African ✈️ • • Travelling while black means planning months in advance • • It means being rejected for a visa with no reasoning other than you’re African and therefore suspicious (after they have taken your money) • • It means being pulled out of large crowds of white people at the airport to be interrogated • • It means being told at the border we don’t want you here even though you have every right to be there and your white wife having to threaten them until they let you in • • It means being denied service at restaurants • • It means being stared at A LOT. • • While I have had a number of positive experiences while travelling (Thailand, Mainland China, Malaysia, Cuba, France, Italy were great for me personally). You have to do your research— Black people - particularly with an African passport - do not have the luxury of freedom. • Worst travel experiences I have had: Cambodia, Hong Kong (every time), Russia, Germany and U.K. (most discriminatory). • • • • #blm #endracism #blackvegan #veganlife #vegancommunity #travel #blacktravel #blacktravel #afrovegan #blackmentraveltoo #travelnoir #blacktraveller #endspeciesism #globetrotter

Check out his account for tips on traveling vegan in Japan, Thailand, Senegal and many other countries. He's even written a guest post about being vegan in Rwanda write here on this blog.

Also be sure to read the caption under his photo embedded above, where he explains what it's like traveling the world as a Black African.

This account is run by a vegan/pescatarian couple, both of whom are global vegan food connoisseurs. Jeremy (who is the vegan one) also has his own travel account, @jeremybythegram. They love to defy the stereotypes about what “Black people don’t do”, so look for them jet skiing, parasailing and enjoying other crazy adventures around the world, including in Turkey, Mexico, Brazil and Aruba.

Aye Cee is based in Richmond, Virginia USA. She originally started a travel account called @blackveganswhotravel, which sounds amazing. But then she wasn't traveling that much, so she switched over to this account and started posting about food wherever she happened to be (mostly Richmond).

In still includes some travel content though, most recently from Morocco, Spain and New York. And if you happen to be traveling to Richmond, it’s a gold mine of restaurant recommendations!

🗣BLACK FOLK! We are said to be the fastest group of people ditching the meat + dairy industry. Yes. US. . This is why my page exists. From day one I’ve been on a mission to show people who look like me that life exists beyond animal consumption (contrary to popular belief). . I used to be an all or nothin’ kind of person when it came to eating meat + dairy. Not anymore. Change is hard. It takes time. I get it. I made the switch, but everyone’s journey is different. . If you’ve completely given up meat + dairy, I’m proud of you. If you’ve been lessening your consumption of meat + dairy, I’m proud of you. . I hope this page can be a safe space for you to explore new ways of cooking, eating, and hopefully encourage you to try some new things. 🌱 I’ve got an entire blog filled with recipes for you to explore 😉 . Where are you on your journey? If I can help, let me know! www.icanyoucanvegan.com

Desirée became vegan in January 2017 after watching the documentary Food Choices. Her IG account includes mostly recipes, but also some travel content. Be sure to check out her story highlights on destinations like Tokyo, Beijing and Bangkok.

And Desirée is not just an Instagrammer, she’s also a blogger! Which makes her, as far as I am aware, the only Black vegan travel blogger out there.

I’ve been searching high and low for Black vegans blogging about travel so that I could add them to my list of 100+ vegan travel blogs. If you know of any others please tell me about them!

Otherwise, check out the I Can You Can Vegan blog, where you’ll find articles on vegan food in Mexico, Indonesia, Greece and much more. Here’s a link to all Desirée's travel content.

A post shared by The Ultimate Vegan Brunch Tour (@theultimateveganbrunchtour) on Oct 15, 2019 at 1:53pm PDT

Suzette is a travel vlogger who loves brunch. She started a video series about vegan brunches on her YouTube channel, Happy Life Suz, as a way to help herself transition to becoming fully vegan.

Her ultimate vegan brunch tour started in New York City, and since then she has featured brunches in Bali, Paris, Shanghai and San Francisco, among others. In addition to her brunch videos, she also has another video series on her channel called "Travel With Suz".

Subscribe to her channel for more videos on food, hotels and attractions around the world.

This page is run by Zatiti Ema, and the account name stands for Red, Black, Green and Vegan. This is also the name of Zatiti’s first book, which she wrote to help Africans eat better. She has a second book for children ages 8 to 14 called What's in Your Lunch Box, which teaches young readers about animal cruelty.

While travel is not the main focus of her account, you will find some travel content here, notably on Egypt. There’s all kinds of great information in her hundreds of IG posts. I just learned from scrolling through her feed that Rosa Parks and Coretta Scott King were both plant-based. Amazing!

Erick Woodby is a travel enthusiast from the US who began his digital nomad life a few months ago, starting in Stockholm, Sweden. Of course, then the pandemic hit, and so he has essentially become an expat in Stockholm for the time being.

But you can expect more travel content from him on other destinations once it becomes safe to travel again. Erick also writes a blog, so maybe in a few months from now it will become a Black vegan travel blog, which would be awesome.

Naomi is a plant-based minimalist and athlete who enjoys helping others by giving them advice on how to improve their health and wellness.

Born in Chicago, Illinois, Naomi has been vegan for 6 years and has lived in Brazil, Morocco and the United Kingdom. She's now preparing to live in Japan this August!

Some of the things you’ll find on her feed include fitness and nutritional information, daily inspiration, and personal experiences relating to eating plant-based while traveling.

On her website, Diverse Vegan, Naomi is determined to build an unbiased online community that caters to all eating and health-oriented lifestyles. You can find more about her by visiting her site.

Kendra Lewis describes herself as a girl who has a crush on the world. On her IG account and on her YouTube channel, she shows you how to travel like a local and learn about the local language and culture in the places you visit. All while eating a raw vegan diet.

Taneka is from the Bahamas, hence the name “The Island Vegan”. On her IG account she mainly shares vegan recipes, but you’ll also find some travel content there, including on Greece and Costa Rica.

And since her blog’s tagline is “vegan recipes, lifestyle and travel tips from an island girl”, keep watching for more travel content from her in the future.

And if YOU are a Black vegan traveler, please introduce yourself, I'd love to meet you! 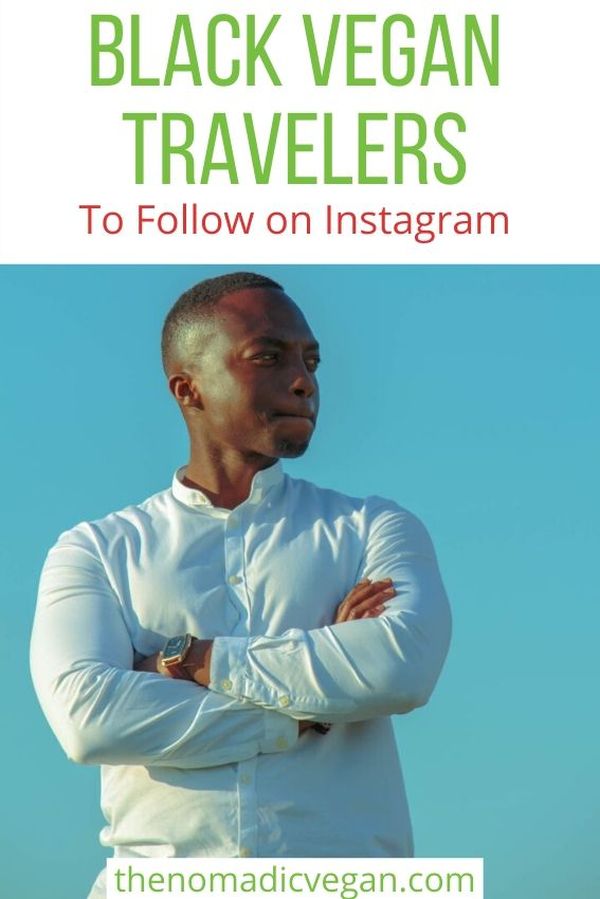 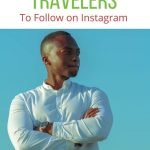 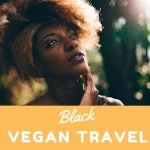