When I first created this blog, I included The World Peace Diet by Dr. Will Tuttle in my list of links and resources, even though I hadn’t actually read the book yet. I had listened to an interview with Dr. Tuttle and was very interested in his message that we can find spiritual health and social harmony by changing what we eat. Based on my own experiences as a new vegan, I knew that by ceasing to eat animals and their secretions I had immediately felt a closer connection with all of nature and all living beings, and I was certain that a vegan lifestyle brought with it positive spiritual effects. 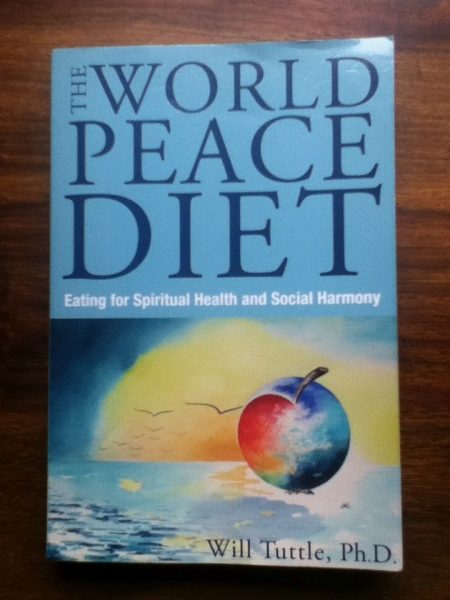 I have just finished reading the book, and it is only now that I have begun to understand just how deep the connections run between the way we treat animals and the way we treat ourselves, each other and the planet.

The core message of the book is this: We have been born into a herding culture that has a hidden programme, which is injected into us primarily through our daily meals – the most powerful rituals of any culture. From a very young age we are forced to adopt a mentality by which we learn to perceive living beings as commodities – things that we are free to manipulate and use to our own advantage – rather than as individuals with their own interests, personality, and purpose in the world.

It is this mentality that enables us to enslave and kill non-human animals for our own pleasure, but it doesn’t stop there. This worldview, based on elitism, privilege, and the belief that certain beings are inherently superior to others, has also led us to commodify other humans, as well as what we refer to as “natural resources” – the trees, water, land, minerals, etc. that make up this planet we call home. It has led to an inherently unjust economic system based on competition rather than cooperation, a system in which might makes right and the powerful exploit the vulnerable. Our meals require us to eat like predators and thus to see ourselves as such, cultivating predatory behaviours that inhibit our spiritual growth. Our consumption of animal flesh and secretions is nothing less than the fundamental root cause of the war, poverty, hunger and so many other environmental and social injustices that are plaguing our planet and our society.

I’ve mentioned previously that before becoming vegan I had a strong interest in human rights and social justice issues and wanted very much to do my part to make the world a better place – I just wasn’t sure what that part was. Well, now I know. While compassion for animals was already a good enough reason for me to follow a vegan lifestyle, after reading The World Peace Diet it is my most strongly held conviction that the most effective thing I can do to promote peace and justice – for human as well as non-human animals – is to educate, encourage and hopefully inspire other people to stop hurting and eating animals. It’s an amazing feeling to have finally found my purpose. If you would like to feel this amazing feeling too, then I highly encourage you to read this book. You can, of course, purchase it on Amazon or at your local bookseller, or you can download it for free in pdf format.

It is time for we humans to evolve, to break with our culture’s taboo against knowing who we eat and accept the interconnectedness of all life. Our current path is one of self-destruction, as well as destruction of everything in our path. If we are to survive as a species, we must transform the paradigm of human consciousness from one of domination and exploitation to one of cooperation, harmony, and respect for all life. I am convinced that this will happen naturally and effortlessly once we stop using and abusing non-human animals and start seeing them for the wondrous creatures they are.