Where to Find Amazing Vegan Food in Canggu 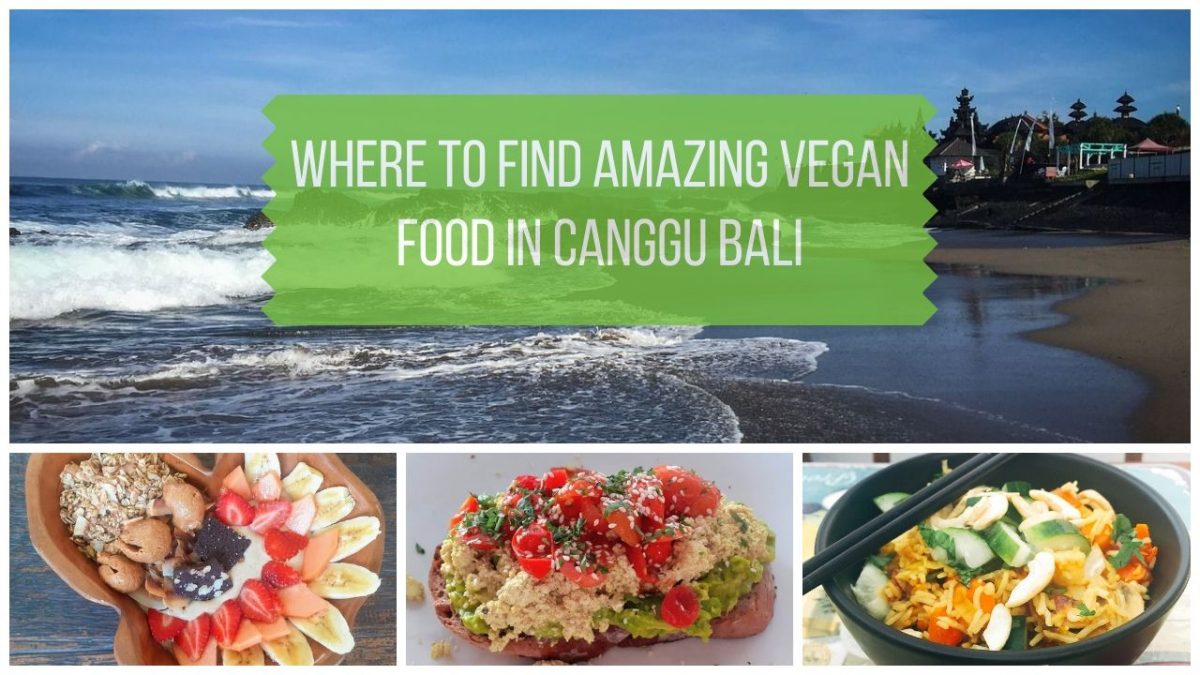 When I packed my bags to travel around Asia, I was slightly apprehensive about whether or not I was going to be able to find vegan food to eat on my travels. And more importantly, good vegan food!

As soon as I stepped foot in Canggu Bali, I realised I wouldn't have a problem here. The streets are lined with ‘vegan’ signs. There is so much vegan food on offer in Canggu it blew me away.

Bali is the go-to place for all things health and wellness. It's full of yoga retreats, healthy eateries, and wellness-focused hotels and spas. Health-conscious tourists flock to Bali in search of self-discovery, and it’s easy to see why. It's a health paradise and also a vegan heaven, and the village of Canggu is no exception to this.

Bali is well known for its cool breakfast and brunch spots and modern coffee shops, and Canggu has plenty of these to offer. But it also has much more than this. The variety of vegan food available in Canggu restaurants is unbelievable.

From junk food to health food, from local meals to international cuisine, whether you’re gluten free or follow a raw food diet, you won’t struggle to find good food in Canggu.

Vegan food aside, Canggu is a great place to visit, whether you’re a backpacker who’s travelling around Bali or someone looking for a holiday destination. Canggu has a great chilled-out atmosphere with a very cool surfer vibe.

A world away from traffic-clogged, hedonistic Kuta, the small community of Canggu is a collection of villas with calming views of rice paddies. It’s full of chic shops selling everything from jewellery and clothes to beautiful furniture.

Plus, there are stunning beaches to visit, which are ideal for admiring the sunset or for surfers wanting to catch a wave.

Berawa Beach, reached via Jalan Pantai Berawa or Jalan Batu Belig, has good surfing waves. Echo Beach is another one that surfers often list as their favourite Canggu beach, as it produces some powerful waves. The heavy surf makes it too dangerous for swimming, though, so for that head to Nelayan Beach instead.

Canggu offers a huge array of stylish restaurants and bars serving up delicious food and cocktails. Also, there's plenty of nightlife in the form of beach clubs and bars, so you can party on the beach until the early hours.

There are heaps of lovely places to stay in Canguu, whether its a villa you're after, a hotel, a homestay, or a hostel, you won’t struggle to find accommodation. Or, if yoga is your thing, there are loads of great yoga retreats.

The Pineapple House, The Chillhouse Bali Surf and Yoga Retreat, and Samadi Bali are among the most highly rated. For more ideas on what you can do in Canggu, see this post by top travel blog Girl Tweets World.

Anyway back to why we’re all here, the vegan food!

Along with Ubud, the foodie mecca of Canggu has some of the best vegan cafes and vegan restaurants in all of Bali.

There’s so much vegan food on offer in Canggu that it can be a bit overwhelming knowing what to go for. But don’t worry, I have put together a list of some must-try restaurants in Canggu that are serving up amazing vegan food you’re sure to love. 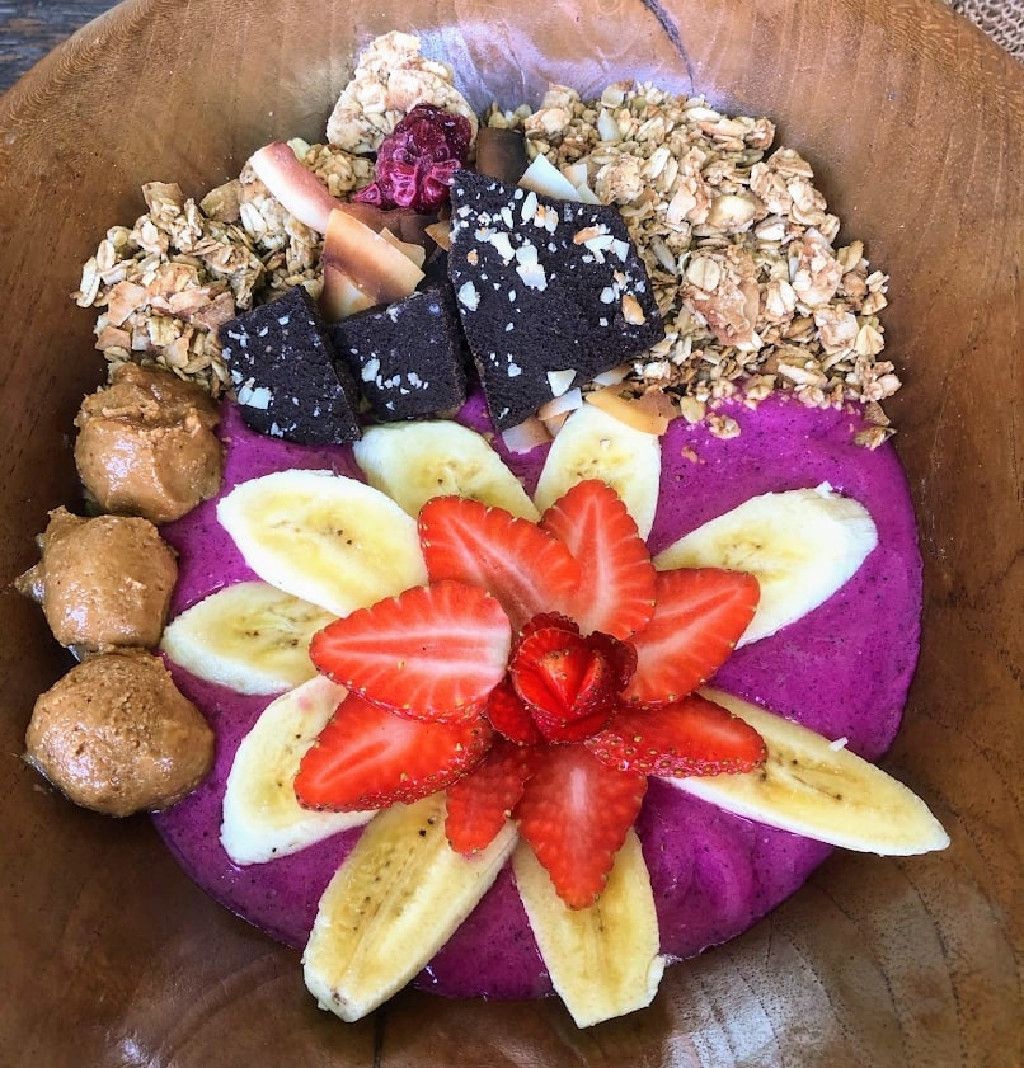 You can’t come to Bali and not try a smoothie bowl or two. The Green Guru makes hands down the best smoothie bowls in Canggu. I highly recommend them!

If it’s an Instagrammable smoothie bowl you’re after that tastes as good as it looks, this is the place for you. All of the ingredients are vegan, natural and have no added sugar, which is awesome!

I ordered the Ghandi bowl, which is a blend of banana, peanut butter, and cinnamon. It comes with all kinds of delicious vegan toppings, plus I got mine with extra peanut butter. Because you can never have too much peanut butter!

All of the bowls on the menu here sound really tasty. They come with an amazing variety of toppings including some seriously yummy granola that they make themselves.

Some smoothie bowls in Canggu are rather small and can leave you feeling hungry soon after eating them, but the portion size here is great. These bowls leave you feeling full and satisfied for ages, plus they come in cool bowls! 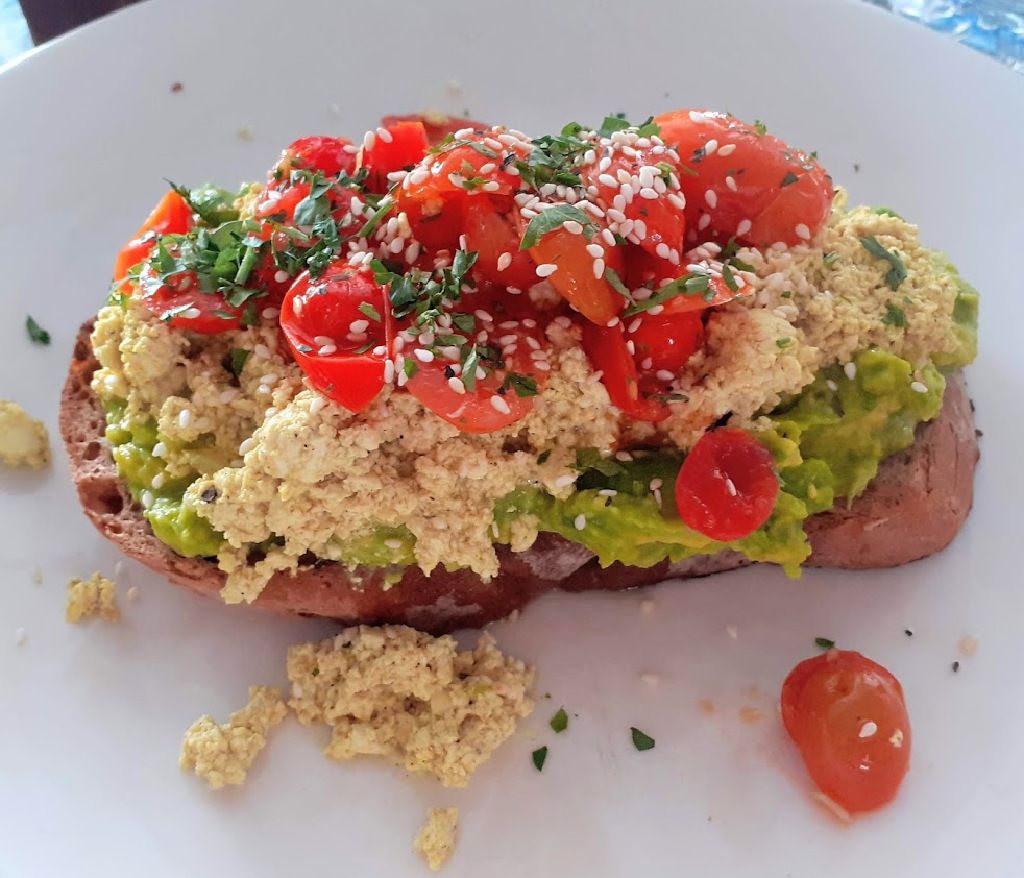 Tasty tofu scramble and plenty of avocado at Crate Café, one of the best Canggu restaurants

Another must-try place to eat in Canggu is Crate Cafe. Now, this isn't strictly a vegan café, but it has loads of great vegan options. Its location is super central on Jalan Padang Linjong, also sometimes called Jalan Pantai Batu Mejan.

Crate Cafe is great value for money, and it’s a popular choice among people visiting Canggu who want to have the quintessential Bali brunch experience. There’s a very cool industrial vibe to this café. Instead of menus, the names of all their dishes are written on the concrete wall.

On my first visit, I tried the SMASHITUP, which is tofu scramble and avocado on toast with cherry tomatoes and onion. While this was really good, my favourite dish is the one I ordered the next time I visited Crate Cafe. That was the WUDDUP, which consists of falafel, avo, and hummus on toast with all kinds of great salad bits.

They also do a vegan burger, nachos, a salad bowl, a pie, pancakes, and more! Even if none of the marked vegan dishes take your fancy, they are happy to swap ingredients, so most things on the menu can be made vegan.

I am Vegan Babe Cafe 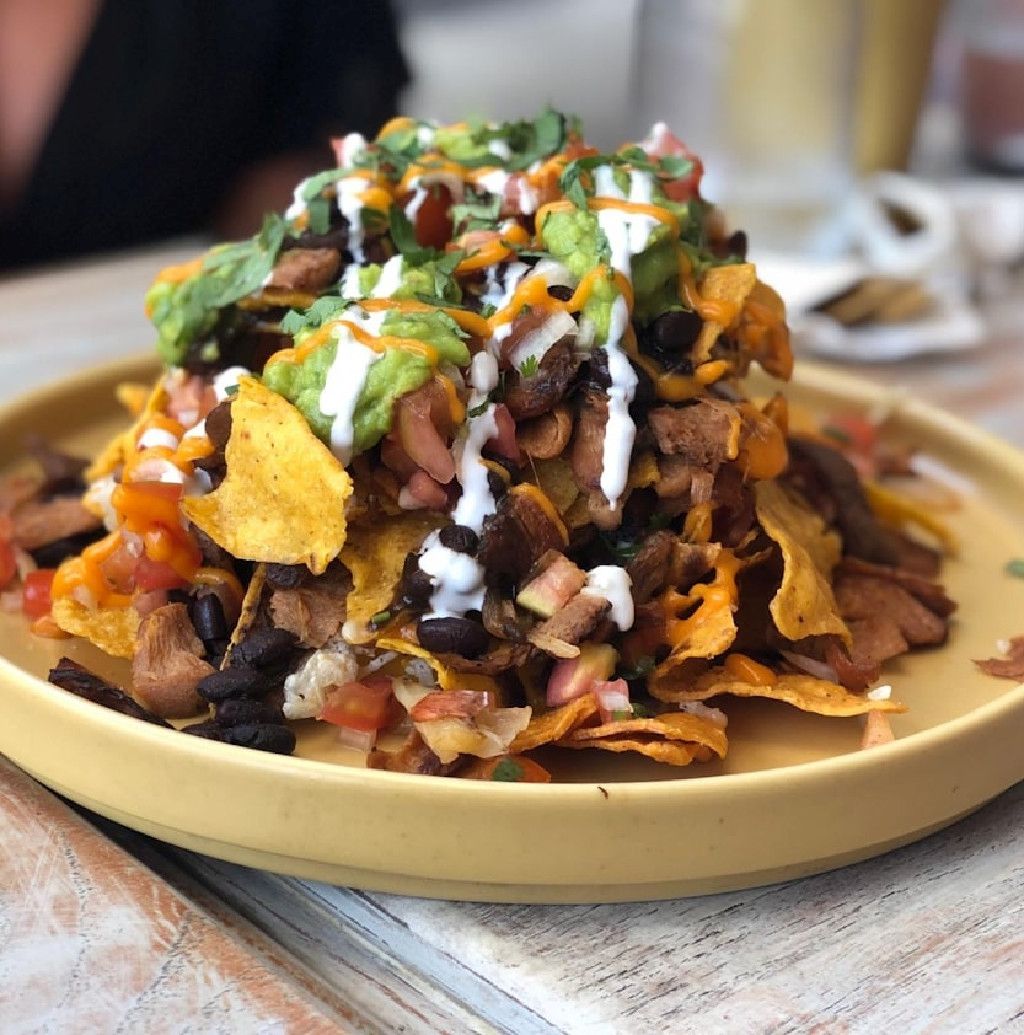 This top vegan Canggu restaurant has the best vegan nachos ever.

Next on the list is I Am Vegan Babe. This place is seriously amazing, and, as I’m sure you can tell from the name, everything here is 100% vegan. There is so much choice here. The menu is full of mouth-watering dishes, and everything that comes out looks amazing.

They serve everything, including pancakes, waffles, smoothie bowls, burgers, sandwiches, salad bowls, and the list goes on! I tried the tasty pancake stack and the nachos, and I can honestly say that those were the best nachos I have ever eaten. Definitely worth a visit!

One thing I Am Vegan Babe does really well is mock meat. They have loads of different kinds, and they're all really delicious. I visited this place with three meat-eaters, and they enjoyed the mock meats too.

This restaurant also does a very convincing vegan egg, sunny side up, which isn't something you come across very often.

If you need a break from the endless brunch options in Canggu and are after something a bit more local, then Oma Jamu is the place for you. They serve up completely vegan Indonesian food, with loads of different options.

There’s a menu you can order from, but to be honest, my dining companions and I didn't even look at that. Most people come here for the buffet. You pay 40,000 rupiah for any seven dishes that they have available, which is pretty cheap.

There are loads of scrumptious vegetable dishes to choose from, and they also have tons of tofu and tempeh cooked in all different ways.

It’s really good value for money, because they pile your plate high. This also makes eating here a great way to try lots of different things, especially as the options change daily. You can also have a really nice view from the seating area, which looks out over the rice fields.

If it’s Italian you’re fancying, then the place to head to is La Baracca. This is probably the best Italian restaurant in Canggu. It has a great atmosphere and some really flavoursome food and is a great choice for an evening meal.

This restaurant is not purely vegan, but it has some really good vegan options on the menu. For this reason, it’s an especially great choice for mixed parties of vegans and meat-eaters.

I ordered a pizza vegetariana but swapped the mozzarella for vegan cheese. This pizza was delish! There were lots of lovely veggies, and the vegan cheese was yummy too.

Other marked vegan options include ravioli, calzone, focaccia, and a pizza bomba. The latter is a pizza that’s baked in the oven and then fried! In addition to these, they also have items on the menu that can be made vegan on request.

Eating at Local Warungs in Canggu 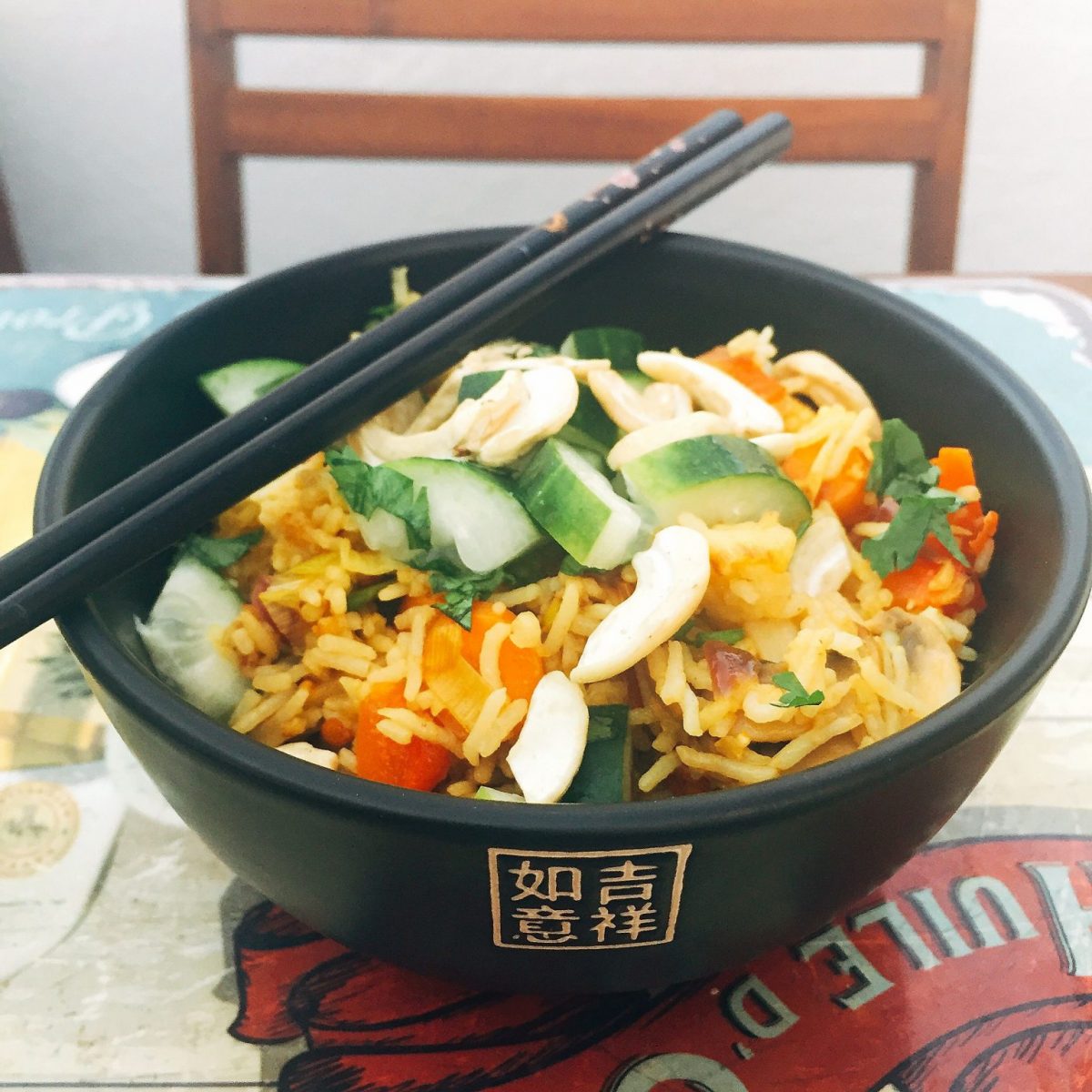 If you’re a traveller on a tight budget, there are some really great little warungs that are either completely vegan or will cater to a vegan’s needs. Warungs are small Indonesian restaurants that are usually family-owned.

These are usually the cheapest restaurants to eat in. Just because they're cheap, though, doesn't mean the food isn’t good. You can find some really yummy vegan food in these types of restaurants.

One of the most common dishes you will find at a local warung is vegetable nasi goreng, which is fried rice and vegetables. Just remember to specify that you don’t want egg.

The same goes for vegetable mie goreng, which is fried noodles and veggies. Two other items that all of these warungs will have on their menu are tofu and tempeh. Yay for plant-based protein!

There will be loads of other options at the warungs too, just make sure that you specify that you're vegan if it’s not a fully vegan establishment. The folks who run warung are usually happy to make adaptations for you.

A good area to look for some of these restaurants in Canggu is Pantai Batu Bolong. Examples of eateries on this street include Ithaka, Warung Varuna, and Warung Bu Mi. Ithaka now also has a second location open in Ubud, in case you’ll be visiting there too.

So, there you have a few of my top choices if you are looking for amazing vegan food in Canggu. Although honestly, this place has so much more to offer than just the places included in this list.

Others that you might want to check out include popular Peloton Supershop and Green Ginger Noodle House, both of which are on Jalan Raya Pantai Berawa. Motion Cafe is another spot that’s popular with healthy eaters.

You'll be spoilt for choice in Canggu. It's worth coming here purely for the food!

Of course, while you're here you might as well enjoy all the other great things Canggu has to offer. You know, the beautiful beaches, the cool bars, the stylish shopping scene. And you could even take part in a yoga class or two - there are plenty of them to choose from.

Below is a map of all the Canggu restaurants described in this guide.

Hi, I’m Chloe, I’m a freelance content writer currently backpacking in Asia. I am passionate about all things travel and vegan and I love to write. Please get in touch via chloepress@hotmail.co.uk or follow my travels on Instagram. 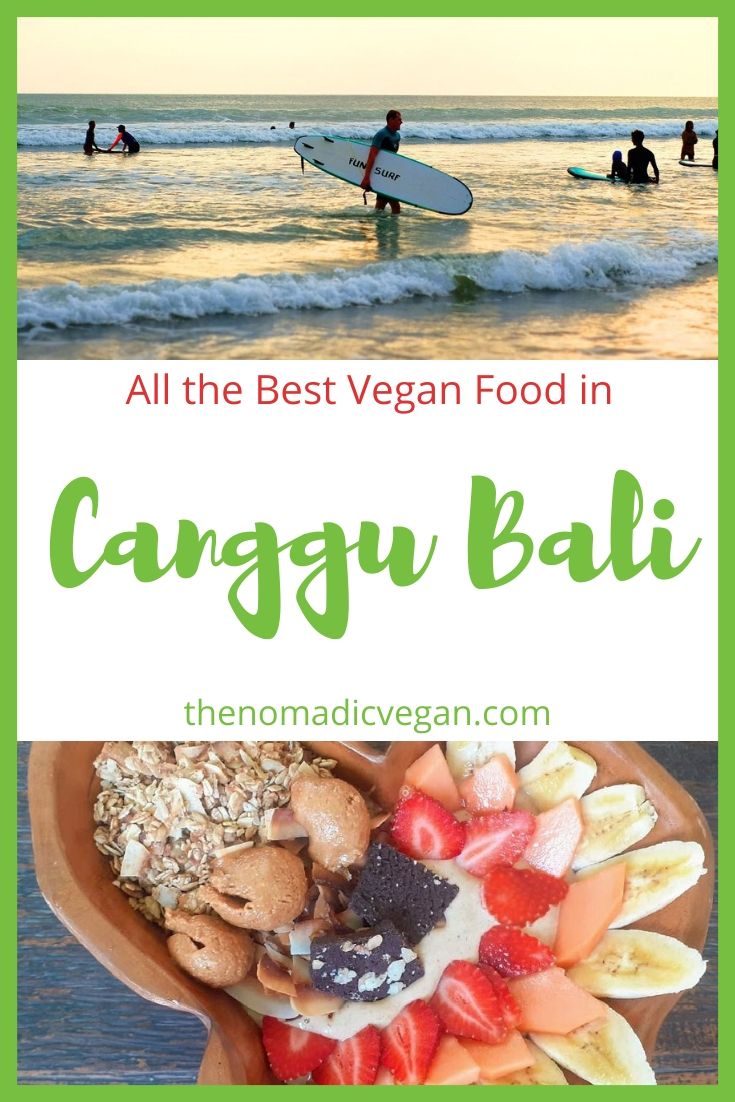