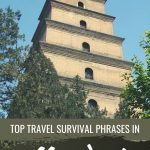 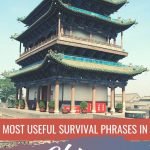 Why You Need to Know Chinese Basic Words and Phrases

If you’re going to travel in China, then you really need to learn a few common Chinese phrases. I speak from experience when I say that traveling in China without knowing at least some basic Chinese words and sentences is incredibly frustrating.

Even if you’ve traveled in dozens of other countries without speaking the local language, the language barrier you’ll come up against in China will be unlike anything you’ve experienced before.

But the good news is, learning just the very basics of Chinese will really go a long way. And who knows, you may fall in love with the language like I did and want to keep learning!

When I first started learning basic Mandarin in 2009, I saw it purely as a survival tactic. Nick and I were working in Guangzhou, China off and on for a few weeks, and in between work stints we had lots of time to explore the country.

For our first short trip in China, we chose the remote Western Chinese province of Gansu. This was not the wisest choice we could have made. Fascinating as it was to explore such an off the beaten track part of China, we got ourselves into all kinds of trouble.

We even wandered into an out of bounds area and found ourselves surrounded by a S.W.A.T. team of half a dozen police officers! Of course, we could have avoided all of this if we had just known some Mandarin basics.

If you memorize just a few Chinese words and phrases from the list below, like “please”, “thank you”, “sorry” and the very useful “I don’t understand”, this will already make your trip a lot smoother.

And for the phrases you can’t remember, just keep them on hand so you can show them to people as needed.

Should I Learn Simplified or Traditional Chinese Characters?

In the list below, each phrase is written in both simplified Chinese and traditional Chinese characters. So, which one should you show to locals when trying to communicate with them? Well, it depends on where you are traveling.

The simplified Chinese script is used throughout mainland China and also in Singapore. Traditional Chinese characters, on the other hand, are used in Hong Kong, Macau and Taiwan.

In Malaysia, schools switched to teaching simplified Chinese in the 1980s, but most Chinese speakers there are able to read both sets of characters without much difficulty.

Chinese-speaking communities in other parts of the world are probably more likely to use traditional characters, but this may be changing over time with new waves of immigration. If you’re not sure, you can just point to both.

But even the Chinese languages are as different from each other as English is from German, or as Spanish is from French.

However, these differences only show up in spoken form. The written form of Chinese, which is based on Mandarin, is standardized throughout the country.

In fact, it’s pretty common for Chinese people who speak different languages to resort to writing things down in order to communicate with each other. So, if you point to one of the written phrases in this list to get your point across, this won’t be seen as weird.

Although, it’s more fun to try pronouncing them yourself! Just one word of caution, though. Don’t try to pronounce Mandarin words or phrases without knowing something about tones first.

Mandarin is a tonal language, and you really do need to get the tones right if you want to be understood.

If you say the syllable “ma” with a rising tone (“ma?”) instead of a falling tone (“ma!”), for example, you’ll end up saying a completely different word.

This is where pinyin comes in handy. Pinyin is a system for romanizing Chinese, which means writing Chinese words phonetically using the Latin alphabet.

A tone marker over is written over each syllable to indicate whether it’s pronounced as a first tone (mā), second tone (má), third tone (mǎ), fourth tone (mà) or neutral tone (ma).

For each of the basic Mandarin words and phrases in the list below, you’ll find the pinyin with tone markers next to it in the right-hand column.

Of course, you still need to know what the different tones sound like in order to pronounce them properly.

It would be silly of me to try to teach you tone pronunciation in a written article, so instead I’ll direct you over to ChinesePod, one of my favorite resources for learning Chinese.

The folks there have put together a great video course called Say It Right that’s all about Chinese tones and pronunciation. It’s totally free; you just need to sign up for a free account.

If you’re not interested in learning Chinese to an advanced level and just want to have some common Chinese phrases at your fingertips, then uTalk is a great option.

Inside the uTalk smartphone app, you’ll find hundreds of useful Chinese words and phrases on all kinds of topics ranging from asking directions to watching a football match.

In addition, the list below also covers the main topics of eating out in restaurants, using public transport and checking in and out of accommation. I’ve limited the list to about 100 words and phrases to keep it a manageable size for a blog post.

But if you’d like to have a more extensive list of Chinese phrases in English translation, covering dozens of other topics, then do check out uTalk.

Even if you don’t plan to actually learn all the phrases in the app, it also works as a really handy electronic phrasebook. Just type in a word such as “train”, and you’ll instantly see all the revelant phrases, like “the train is canceled”, “the train is delayed” and “when is the last train?”.

uTalk has some really affordable monthly subscription plans, and you can even get 20% off through this link. This discount is valid for any of the 140+ languages uTalk offers, not just Chinese. Oh, and they do offer Cantonese and Shanghainese as well as Mandarin!

And now here’s that list of Chinese travel phrases I promised you. I created this list based on my many years of experience studying Chinese, and I also checked it with a native speaker. So you can be sure that everything here is correct and sounds natural in Chinese.

Most Common Chinese Words and Phrases

These phrases will definitely come in handy when ordering food in a restaurant in Chinese. This list includes phrases for explaining food allergies and for ordering vegetarian or vegan food, which you won’t find in most phrasebooks.

Be aware that the Chinese word for “vegan” is commonly used in Taiwan (where veganism is very popular) but is unlikely to be understood in China. There are actually two words for “vegan” in Taiwan. The one I’ve used below is “全素” or “full vegetarian”, but you could also say “純素” or “pure vegetarian”.

Either way, in China you will probably need to explain what that means.

But don’t worry, I’ve also included in the list phrases like “I don’t eat any animal products” and “I don’t eat meat, fish, eggs or dairy products” to help you do just that.

Want to learn even more Chinese words and phrases? And learn how to pronounce them correctly?

Remember to check out ChinesePod and uTalk. These are the top two resources I recommend for people traveling to China or any other destination where Chinese is spoken. 一路平安 (Bon Voyage)!