Home Crete Crete – Heraklion and around

Crete – Heraklion and around

This place definitely has an independent spirit, and it's jam-packed with amazing historic sights, beautiful seaside villages and stark landscapes. In addition, Cretans are rightfully quite proud of their delicious cuisine.

While there are certainly a number of dishes that are particular to Cretan cuisine, such as dakos and stuffed zucchini flowers (yum!), it was also here that I was first introduced to one of the most ubiquitous foods found throughout all of Greece - spanakopita (spinach pie). 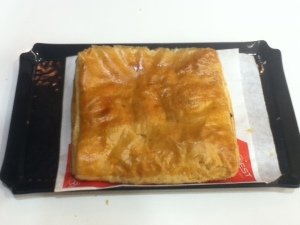 This is the epitome of Greek fast food, and in fact is just one of several different kinds of pies that are commonly sold in the bakeries that seem to adorn every street corner in Greek towns and cities.

However, unlike the vast majority, which generally include some type of cheese, this one is vegan! Now, there is also a spinach and cheese pie that's quite common, so be sure to ask if your spanakopita is nistisimo.

In my experience, though, the nistisimo version was not that hard to find. The one pictured here came from a fast food chain called Everest, which we came across in several cities during our trip.

Now, spanakopita is certainly not gourmet cuisine, nor is it particularly healthy, but we arrived in Heraklion, the capital of Crete, pretty late in the evening and knew we had a jam-packed day of sightseeing ahead of us the next day.

We planned to visit the two ancient sites of Phaestos and Gortyna, AND the Agia Marina Donkey Reserve. So, we really just wanted to grab a quick bite to eat and go to bed early.

That being the case, I was very happy to discover that vegan options are not only to be found in sit-down restaurants but are also part of the Greek street-food culture. Not to mention that spanakopita is delicious!

So delicious, in fact, that when I finished this one I went straight back to the counter and ordered another one.

We had our first proper meal in Crete the next evening at the rooftop restaurant of the Lato Hotel called Herb's Garden.

As we had grabbed our last few meals on the hoof while we were busy sightseeing or travelling from one destination to another, we really wanted to sit down to a nice dinner in Heraklion that night, and Herb's Garden proved to be a good choice.

Though the atmosphere definitely makes this place feel like a step up from the usual Greek tavern, the prices were actually quite reasonable, particularly if you stick to the salad and pasta dishes. And those were the only ones that looked like they could be easily veganized anyway. 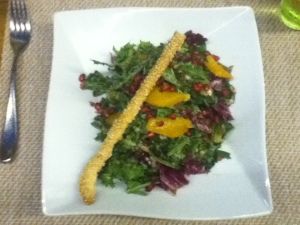 There were no naturally vegan items on the menu, but the staff were quite happy to leave the cheese off my salad, which was a delicious combination of spinach, red lettuce, pomegranate, roasted almonds and orange slices.

The dressing did have honey in it, but I’m sure you could ask them to leave that out as well. And, in addition to the lovely food made from locally-sourced ingredients, this place has a pretty spectacular view looking out over the old city harbour and the Venetian fortress.

This is just the beginning when it comes to the joys of eating on Crete, however. In upcoming posts we'll head to Rethymno and Chania, two very charming seaside towns and home to some of my favourite restaurants in all of Greece.

Our meals are about to get much more decadent, if not to say gluttonous. Plus, I still have to tell you all about our visit with the beautiful donkeys who live at Agia Marina Donkey Reserve. Stay tuned!