While Mérida as a whole is a fairly nondescript, modern city, it is dotted with some quite impressive remains of its Roman past, back when it was called Augusta Emerita and served as the capital of the Roman province of Lusitania. There were so many things to see, in fact, that we just about wore ourselves out trying to fit them all in. From the Roman bridge to the Roman aqueduct to the Roman theatre, each site was more impressive than the last. 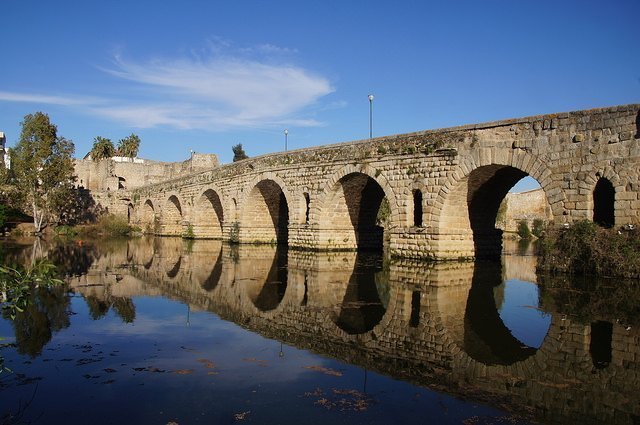 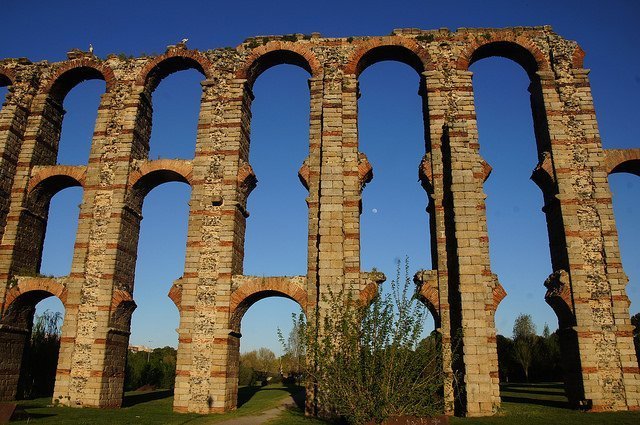 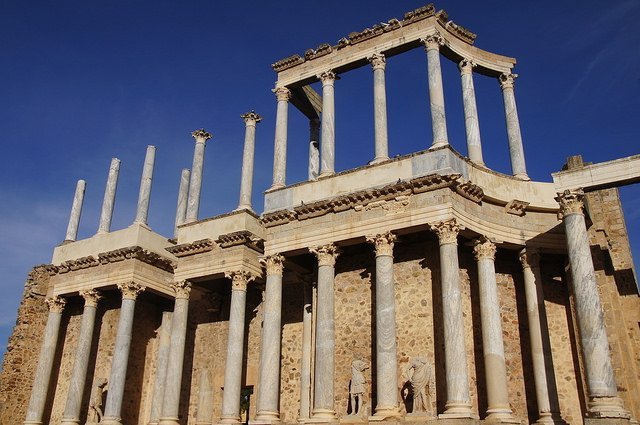 The storks liked the aqueduct the best. 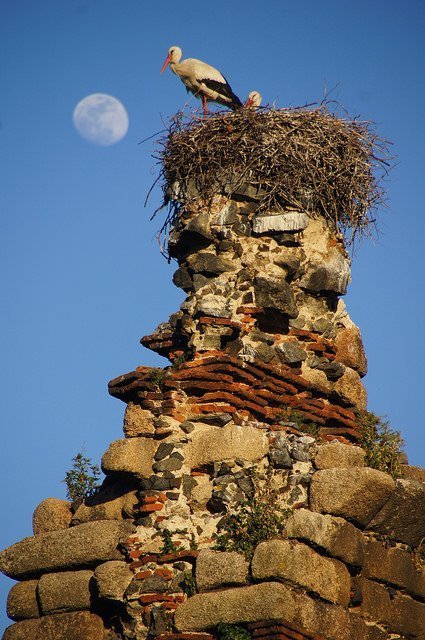 Storks nesting on the aqueduct

And, because we were there during Semana Santa, we even got a chance to go on a special night tour of the Roman theatre and amphitheatre and to visit a couple of sites that are normally closed to the public, such as a “snow well”  where the Romans stored snow that they hauled in from the mountains hundreds of kilometres away and used to preserve food and to cure illnesses. 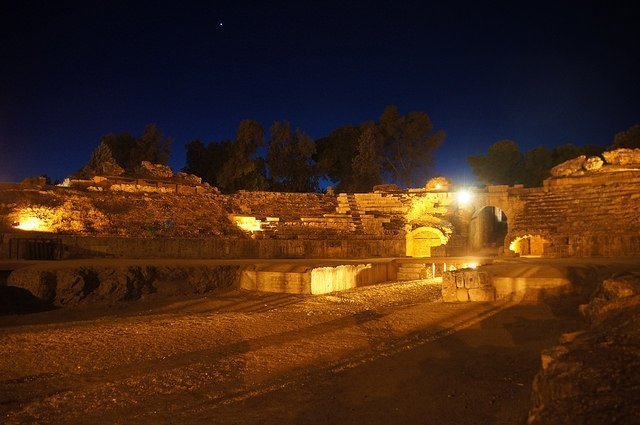 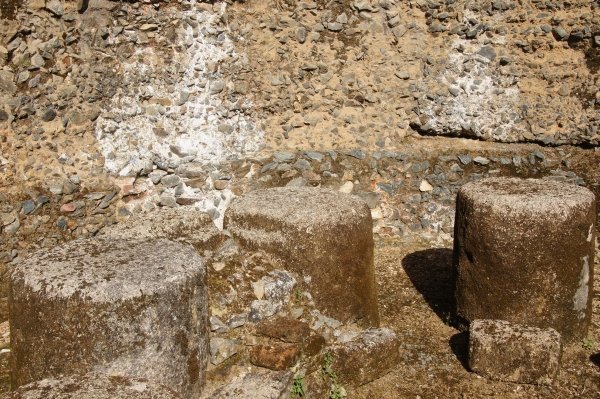 In addition to its ancient Roman sites, I had also been looking forward to visiting Mérida’s vegetarian restaurant, called Shangri-La. 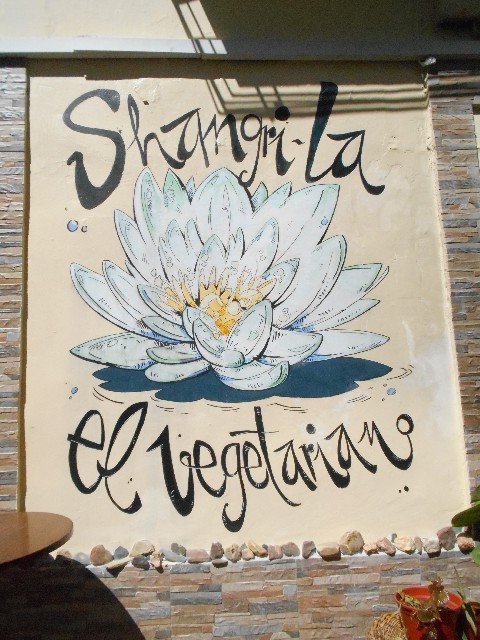 While the restaurant was cute and cozy, and the vegetarian dishes served there looked very good, I have to say I was pretty disappointed with their vegan options. Apart from a salad, there was only one vegan dish on the menu, and another one that was not listed but that the waiter told me about when I asked. I tried one for lunch and the other for dinner and found both of them pretty underwhelming. 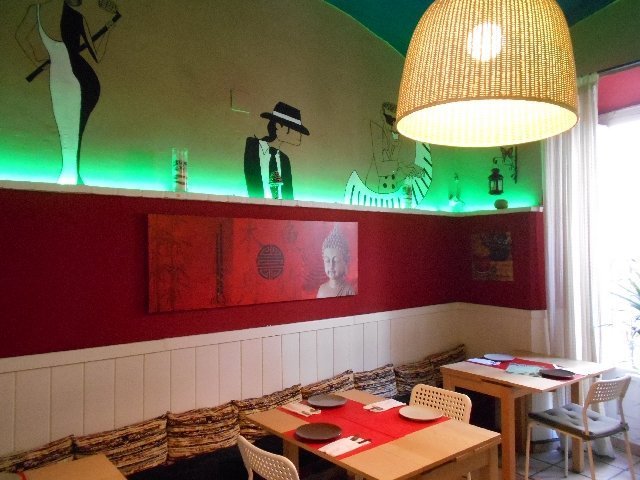 To be honest, I probably could have eaten better at a regular ol’ meat-filled Spanish restaurant. Nevertheless, I chose to have both my meals in Mérida at Shangri-La, because: (a) I like to support vegetarian restaurants whenever I can, because I want them to succeed; and (b) after several days of being surrounded on all sides by people eating meat, signs advertising meat, and pig’s legs dangling from ceilings, I really cherished the peace of mind that came with knowing that, for as long as I was in Shangri-La, no dead animals would be consumed in the same room where I was sitting.

For lunch I had the fricandó de seitan, a vegetarian take on a Catalonian dish that is normally made from beef (and mushrooms). 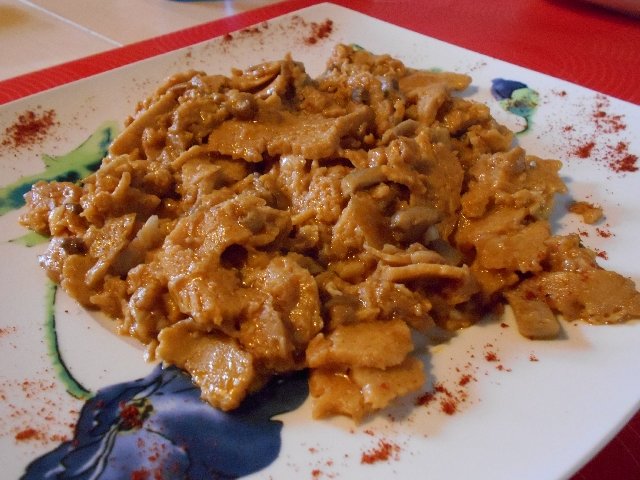 This was actually the first time in my life I had ever tried seitan. It’s something that’s always piqued my curiosity in vegetarian restaurants, but in the end I usually opt for a more veggie-based dish instead. In this instance, too, I would have preferred something with more vegetables if it had been available, but at least now I can say I’ve tried seitan.

I was happy to see that there was one vegan dessert – a kind of apple pie made with shortcrust pastry. To be honest, I didn’t think it looked all that appetizing in the display case, but I didn’t want to pass up the chance for dessert. It tasted exactly how I thought it would, which is to say, kind of dry and tasteless. 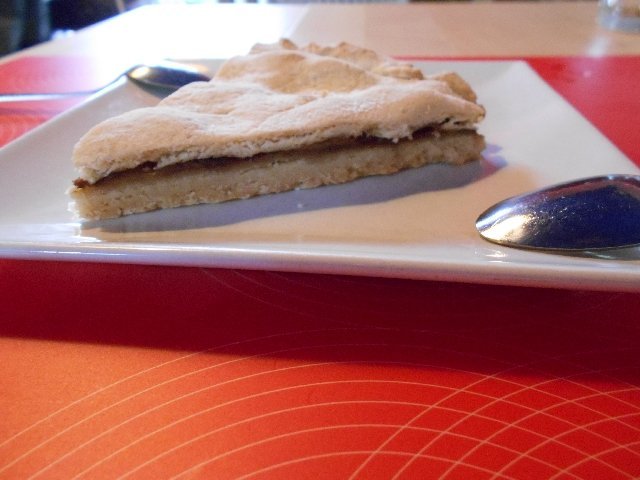 On our return visit that night for dinner, I went for the rice noodles that were not on the menu but that the waiter had mentioned the last time. These came stir-fried with mushrooms and red bell peppers and topped with sesame seeds. They were fine, but not terribly filling, and seemed like they would have worked better as a side dish or accompaniment than as a main meal. 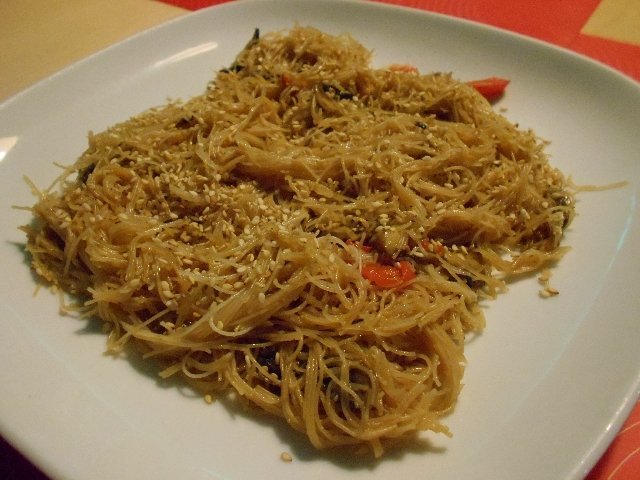 I feel like I’m being extremely negative about this place, so let me try to find something nice to say. Oh, I know: the olives were delicious! 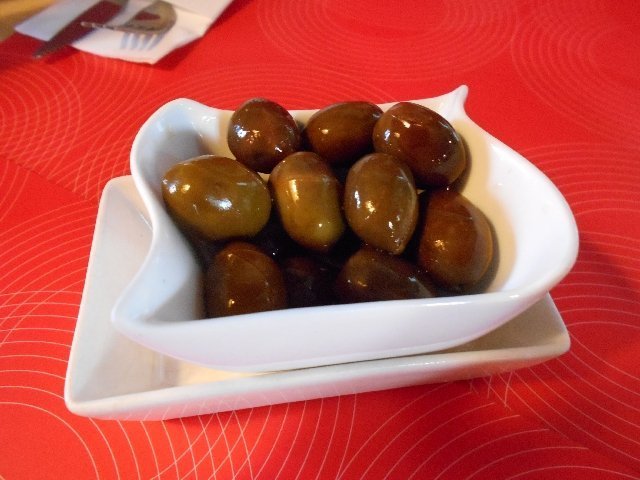 If you look closely, you can see that they’ve each been sliced open individually on the side, just like how the friendly lady in Guadalupe prepared hers, and judging by the taste they had also been infused with plenty of garlic.

I was of course very happy to find any kind of veggie restaurant in this otherwise decidedly carnivorous region of Spain, and I do believe that Shangri-La is a great option for lacto-ovo vegetarians. I just wish they would make a better effort at catering for their vegan customers. For what it’s worth, Nick had the lasagna and the burritos and was very happy with both. While the waiter never mentioned this to me as an option, it looked like the burritos could have easily been veganized by just leaving off the cheese, so you might ask about that if you go there.

Question: Would you go back to a vegetarian restaurant a second time even if you didn’t think the food was very good? Or would you try your luck in a meat-heavy restaurant? I’d love to hear your thoughts in the comments below!