Home Guadelupe Dining in a Monastery Cloister in the ORIGINAL Guadalupe

Dining in a Monastery Cloister in the ORIGINAL Guadalupe

I thought our stay in the parador at Plasencia would be impossible to beat, but the Hospedería de Real Monasterio in Guadalupe sure made a good stab at it. Now, if you’re like me, the name “Guadalupe” conjures up images of Latin America, such as the Basilica of Our Lady of Guadalupe in Mexico City. 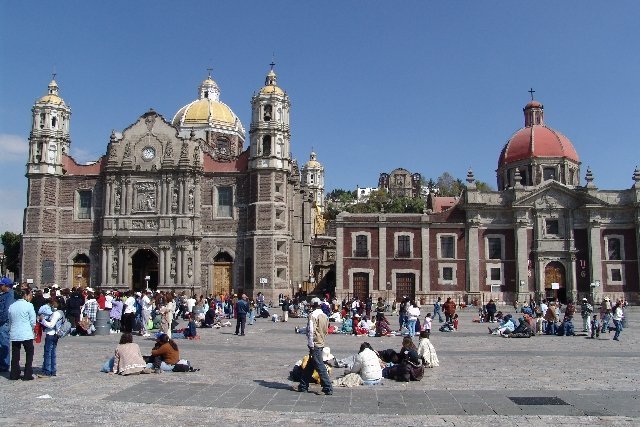 Basilica of Our Lady of Guadalupe, Mexico City

I first visited the Basilica with my high-school Spanish teacher in 1996 (my first international trip!) and again with Nick in 2005. We certainly weren’t the only ones there; it’s the most visited Catholic pilgrimage site in the world. As the story goes, in 1531 the Virgin Mary appeared to a peasant named Juan Diego on a hill outside Mexico City and asked him to build a church on the site in her honour. When the archbishop asked for a miraculous sign to prove it was really the Virgin Mary, she told Juan to gather flowers from the top of the hill, which was normally barren. He climbed the hill as instructed and found roses growing there, which he gathered up in his cloak and brought back to the archbishop. When he opened his cloak, the flowers fell to the floor, and there on the fabric there was an image of the Virgin. This image. 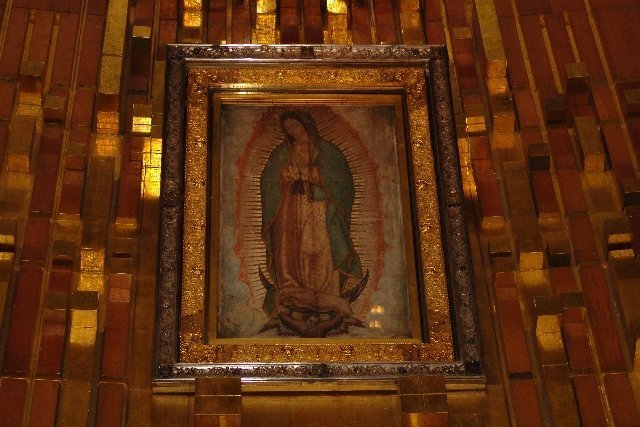 Miraculous image of Our Lady of Guadalupe

It hangs in the basilica in Mexico City today, where they’ve installed escalators to hurry the crowds along so they don’t stand and gape for too long at the image. It’s become Mexico’s most popular religious and cultural symbol.

But the Guadalupe I’m talking about now is located not in Mexico but in Spain, and it has long been a venerated place of pilgrimage in its own right, as it is home to a statue reputedly carved by Luke the Evangelist. In fact, since many of the Spanish conquistadores originally came from the Extremadura region, including Hernán Cortés, they spread their devotion to the Lady of Guadalupe (along with disease, pillage and slavery) throughout the New World. It was here at the monastery that the Spanish monarchs Isabel and Ferdinand signed the documents authorizing Columbus’ first voyage in 1492. 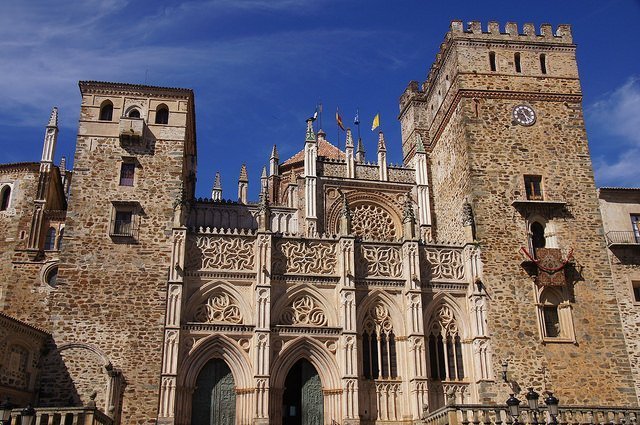 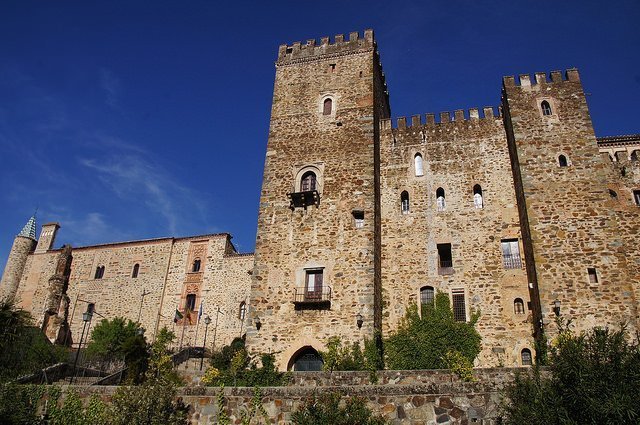 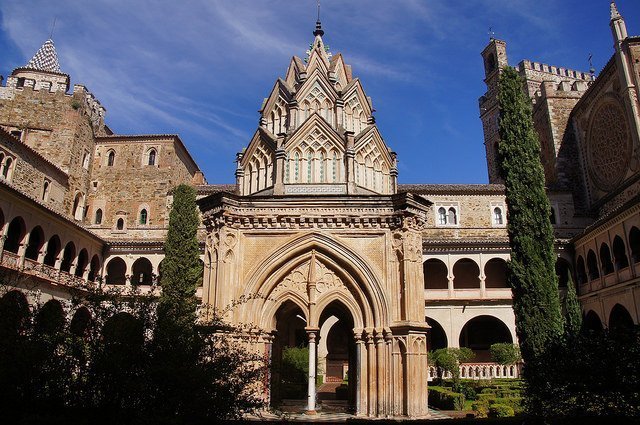 Within the walls of the monastery is a beautiful hospedería (guest quarters), and, at 65 euros for a double, the rooms here are a steal. There is also an attached restaurant where the tables spill out into one of the monastery’s cloisters, so naturally this was where we choose to have our only meal during our short stay in Guadalupe. 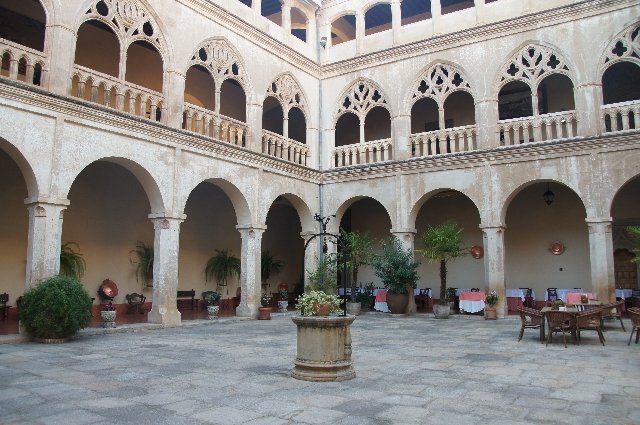 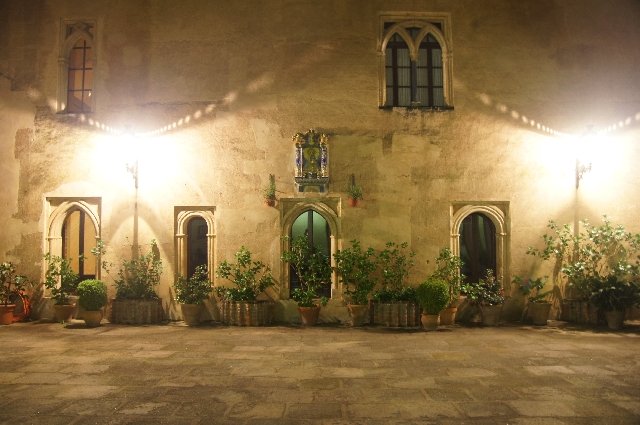 I had emailed ahead of time to explain that I was vegan and had provided the hotel staff with a list of naturally vegan Spanish dishes, just to give them an idea of the kinds of things they might be able to prepare. They responded by saying that, rather than listing several dishes, I should just choose a couple that I wanted to eat and that’s what they would make. Awesome! I chose ajo blanco (a cold soup made with almonds) and pisto (the ratatouille dish that I had already tried in Cáceres). Upon our arrival, however, the receptionist confirmed my request but told me that, in Extremadura, ajo blanco (or gazpacho blanco as it’s also called there) is made with eggs. There were several other vegan choices on the menu, so I chose a (hot) tomato soup instead. 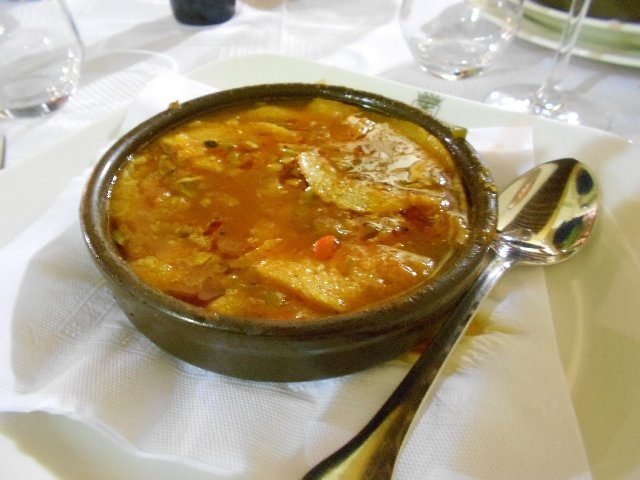 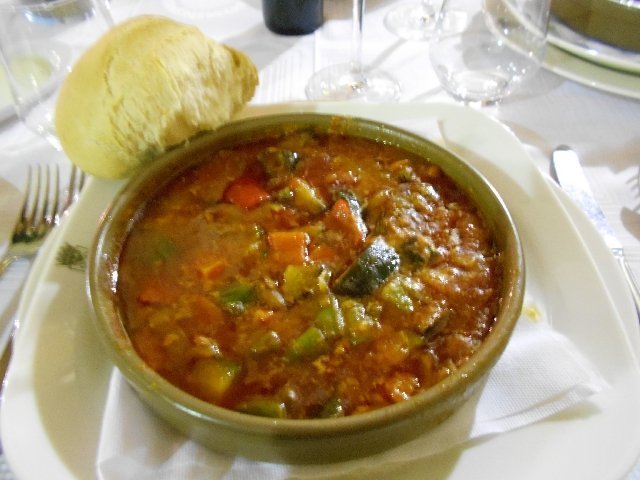 Both the soup and the pisto were very tasty, and the latter was definitely a huge step up in quality compared with the one from the more budget-conscious Restaurante Centro in Cáceres. It was filled with huge chunks of vegetables in a sauce that was delicious when mopped up with a big hunk of bread. Along with our al fresco dining experience in Trujillo, this was definitely one of the most romantic and atmospheric meals of our trip through Extremadura.

Although we only had time for one meal in Guadalupe, while strolling through the quiet backstreets of this sleepy town we did make one other serendipitous food-related discovery . While the main square in front of the monastery is very touristy and filled with hotels and restaurants, keep walking a couple hundred metres and you quickly step into a much more lived-in atmosphere of simple houses with balconies hanging over the narrow streets.

The inhabitants of some these houses sell local produce from their front door, and at Calle de Sevilla 17 we came across an attractive display of nuts, fruits, spices and olives and a sign that said all the products were organic. 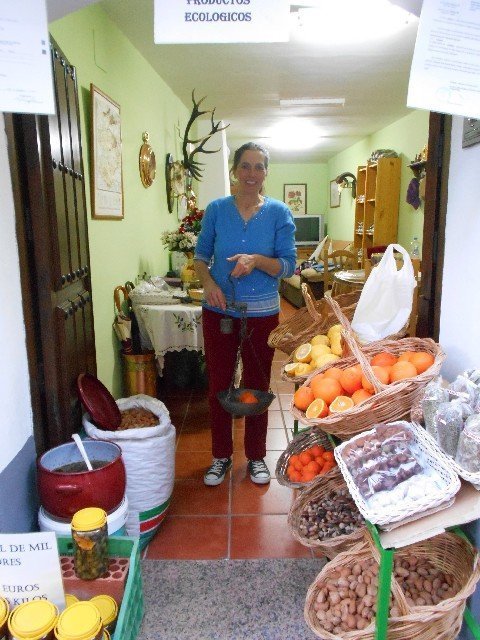 We stopped and chatted with the very friendly woman there, who offered us free samples and conversation, proudly showing off the pointed white hats that her husband and daughter would wear in the Semana Santa procession two days hence. Her dried figs and olives were some of the best that I’ve ever tasted and were ridiculously cheap at only 1 euro for a bag of figs and another euro for a plastic cup full of olives. 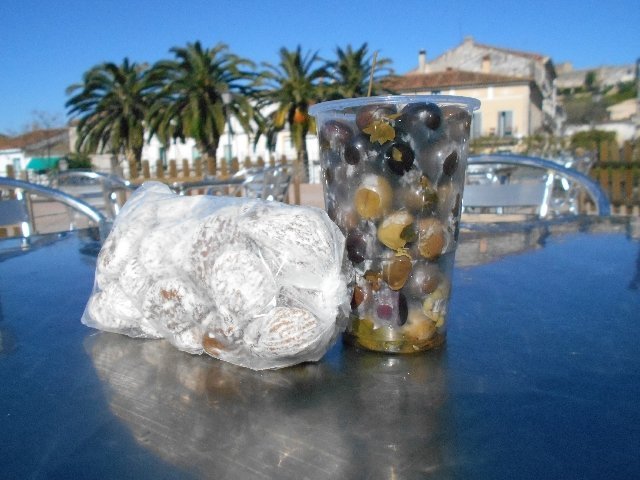 She explained in detail how she prepared the olives, showing us how she cut a slit into the side of each one and then soaked them in a mixture of salt, vinegar, orange juice and herbs to draw out the bitterness. I ate a whole truckload of olives while travelling in Spain, all of which were pretty darn good, but these are definitely the ones I will remember the longest. I’m sure it was the personal touch and loving care the woman put into their preparation that made them so delicious.