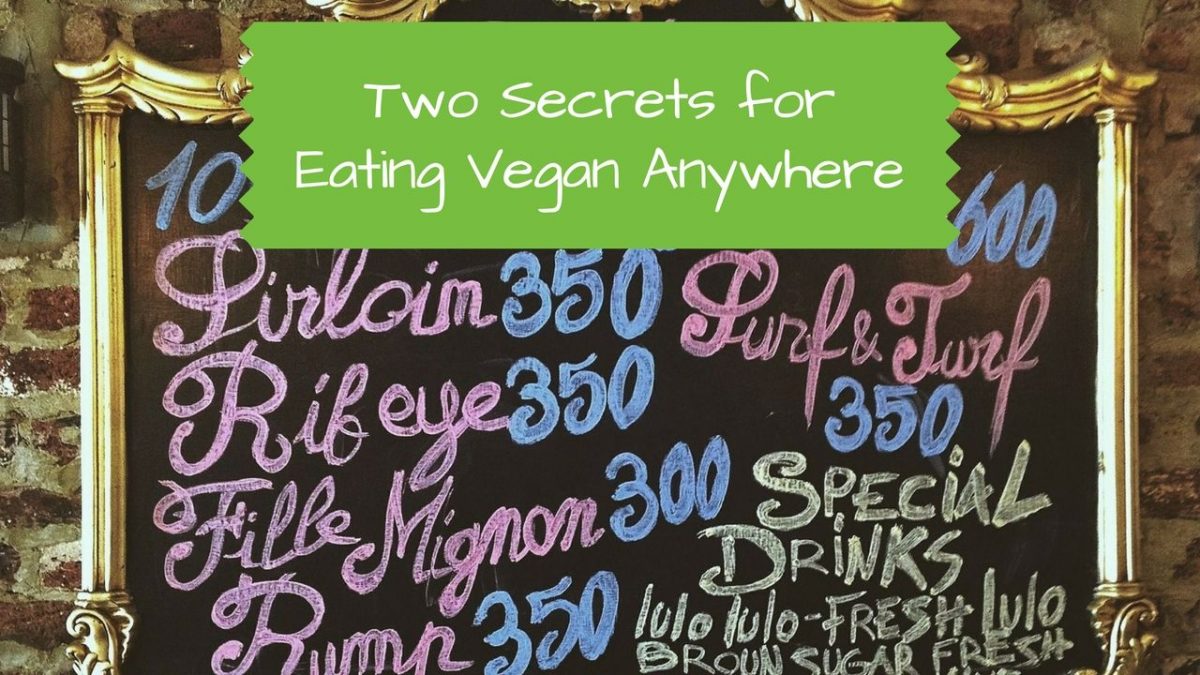 Ever since I became vegan, I’ve been consistently amazed at the abundance of vegan food available to me everywhere I go. I’ve always found eating vegan when traveling, whether internationally or in small town America, to be no problem at all, even in places where I’d been warned in advance that there would be nothing for me to eat.

Like when I went wandering through the remote Extremadura region of Spain or traveling across Russia on the Trans-Mongolian Railway. Both countries have a reputation of catering quite poorly for vegetarians and vegans, and in both cases I ate some fantastic meals and certainly never went hungry.

But I’ve noticed that some people’s experience with vegan travel is very different from mine. They return from a trip lamenting how difficult it was to find vegan food at their particular destination, vowing never to return.

I’ve thought a lot about why our experiences differ so much, and I believe it comes down to two factors: research and mindset.

Preparing for your trip by doing some research beforehand will make a huge difference in how much you enjoy your experience. The problem is, even when people DO put some effort into research, they may go about it the wrong way.

Their research often begins and ends with checking the listings for their destination on HappyCow – the worldwide directory of vegan, vegetarian and veg-friendly restaurants.

Don’t get me wrong, I’m a huge fan of HappyCow, and I always make it a part of my trip research too. But it shouldn’t be the only part.

All too often, when people see that there are few, if any, listings for the city or town they are traveling to, they assume that the place must not be vegan-friendly and that eating vegan there will be difficult. But here’s the thing:

A destination doesn’t need to have a vegan restaurant to be vegan-friendly.

Often, the traditional local cuisine will include options that are naturally vegan or can easily be veganized, even though no one living there has ever heard the word “vegan” before.

It’s just a matter of learning about the local dishes so you’ll know which ones to seek out, and which ones to avoid. And here's another often-overlooked fact:

Most international cuisines are plant based.

In industrial countries that number is higher, but it’s still only 23 percent, which means that people in these countries get 77 percent of their calories from plants.

Even in the United States, where the Standard American Diet (aptly known as SAD) is notoriously meat heavy, animal products still make up less than half of the caloric intake, ringing in at about 36 percent.

It should be clear from these figures that plant-based food is available just about anywhere on Earth that you could possibly want to go. There are a few exceptions, of course, like remote Pacific islands where coconuts are the only local produce, but even then you can find a way to make it work.

Start learning a bit about the local cuisine, and in most cases you will come across dishes that are accidentally vegan or can be easily adapted to be vegan.

This means that you do not have to depend on vegetarian or vegan restaurants for all your meals. While it’s fun to eat at these places when they’re available, it’s also fun to explore the local culture by uncovering the vegan dishes that the locals eat.

I know not everyone enjoys doing this kind of research as much as I do, which is why I highlight vegan dishes from around the world here on The Nomadic Vegan. My aim is to do the research for you, so that you don’t have to.

And in my book, Veggie Planet, I showcase the many naturally vegan dishes in 11 of the world's most famous cuisines and show you just how vegan-friendly these cuisines really are.

But even when they are well-informed about the local cuisine and all its hidden vegan treasures, some people still grumble about how difficult eating vegan while traveling is.

And that’s because knowledge alone isn’t enough. In order to fully experience the joy and abundance of vegan travel, we need to approach travel (and life in general) with the right mindset.

Each of us perceives and therefore experiences the world differently. And those perceptions are based partially on our accumulated knowledge and experience, but above all on our attitude or mindset.

Your brain is constantly bombarded with tastes, sights, smells, and sounds, and if you tried to take all of it in you would have a meltdown from sensory overload. And so, your brain filters out all the extraneous stuff and registers only the stuff that it thinks is important.

And which stuff does it think is important? The stuff that you focus on the most. You have actually trained your brain to develop either an abundance mindset or a scarcity mindset. And you have done this by either focusing on abundance or focusing on scarcity and lack.

This explains why, when two travelers sit down at a restaurant and open the same menu, one might see a delicious vegan feast while the other might complain that there’s nothing there for them to eat.

It’s clear that Colleen herself experiences abundance, not lack, and that this is one of the reasons she is such an inspiring advocate for veganism. In a podcast episode about her travels in Bavaria, Germany, Colleen describes all the delicious vegan discoveries that she made and then closes with these words:

Living a vegan life means considering it a victory rather than a loss when you find 1 item out of 30 that’s vegan on a restaurant menu. Or when you realize that you can veganize 10 out of those 30 items even if they don’t say vegan on the menu. It means accepting the fact that though we might appear different to everyone around us, we’re making a difference. And sometimes, in order to make a difference, you may have to do something different.

So how do you flip the switch in your brain so that, like Colleen, you too can start seeing all the vegan options that are available to you, instead of focusing on the non-vegan ones that are off limits?

As I mentioned before, you can train your brain by telling it what to focus on. In fact, you have been training your brain your whole life, even if you didn’t realize it. And if you’ve been focusing on the wrong things, now is the time to start retraining your brain so that you can live a life of joy and abundance.

In my own life, I’ve developed three daily practices that have really helped me to train my brain to focus on gratitude, positivity and abundance. The results have been striking.

Developing an abundance mindset has brought much more happiness into my life and opened up so many doors to opportunities that I might not have noticed before.

These daily practices aren’t difficult. In fact, I thoroughly enjoy doing them and look forward to them when I wake up in the morning. And it only takes about five minutes in total to do all three.

I want you to experience a joyful and abundant life too, so I’ve created a downloadable guide for you where I describe these practices and show you how you can incorporate them into your daily life. Start doing these three things every day, and you will see your world transform.

Want to Experience Abundance and Find Vegan Food Easily Wherever You Go?

Your 3 daily abundance practices guide is on its way to your inbox.