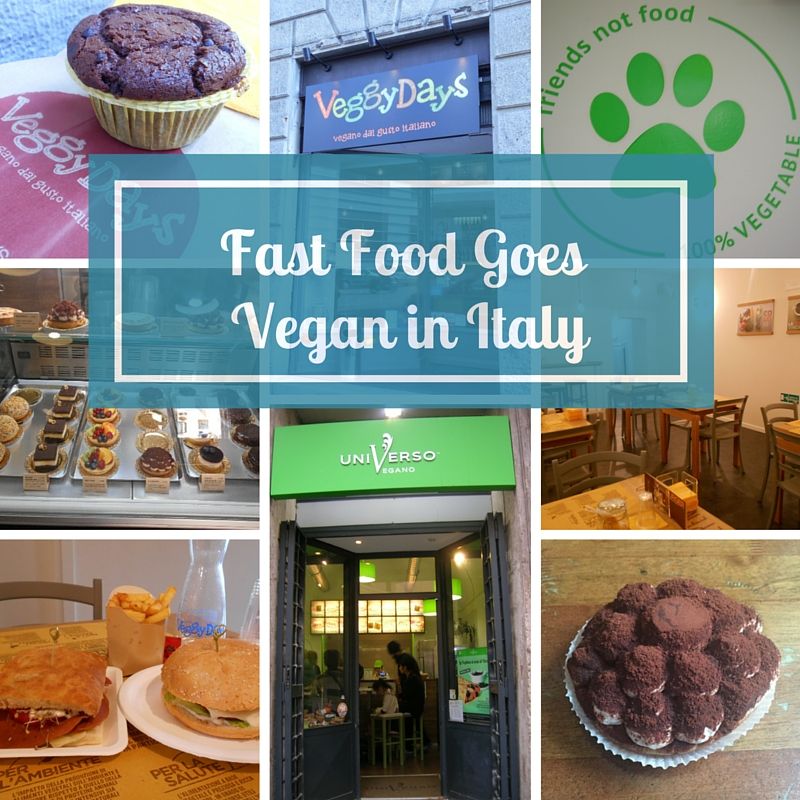 While pasta is probably what first comes to mind when you think about Italian food, and rightly so, pasta dishes are not well suited to the frenetic pace of modern life.

Let’s face it, it’s just not that easy to slurp up a plate of spaghetti all’arrabbiata as you dash between errands on your lunch break. While there are plenty of pizza a taglio (pizza by the slice) joints to fill this need, in recent decades other forms of fast food have also invaded Italy’s streets.

Take a walk down Via Corso Vittorio Emanuele II – the main artery running through Rome’s city centre – and you will see no shortage of kebab shops, sandwich stalls, and yes, even the ubiquitous golden arches.

In the past, these places have included few if any plant-based options, making their “convenience” rather obsolete for vegans. All this has changed, however, with the arrival of two exciting new players on the fast food scene in Italy.

One is called Veggy Days,  the other Universo Vegano. Both are national chains with new locations popping up all around the country in cities of all sizes, and both are 100 percent vegan.

UPDATE May 2020: Things sure do change quickly in the plant-based food world! Veggy Days no longer exists, although the branch in Florence still operates under a different name, Il Vegano.

Universo Vegano has also rebranded as O'Vita, although some branches seem to have kept the old branding, while others have closed. According to their new website, they currently have branches in Parma, Cagliari, Verona, Savona, Bari, Padova and Florence.

Overall, though, the vegan movement in Italy is growing very quickly! Check out my ultimate vegan guide to Italy to see the many different options. 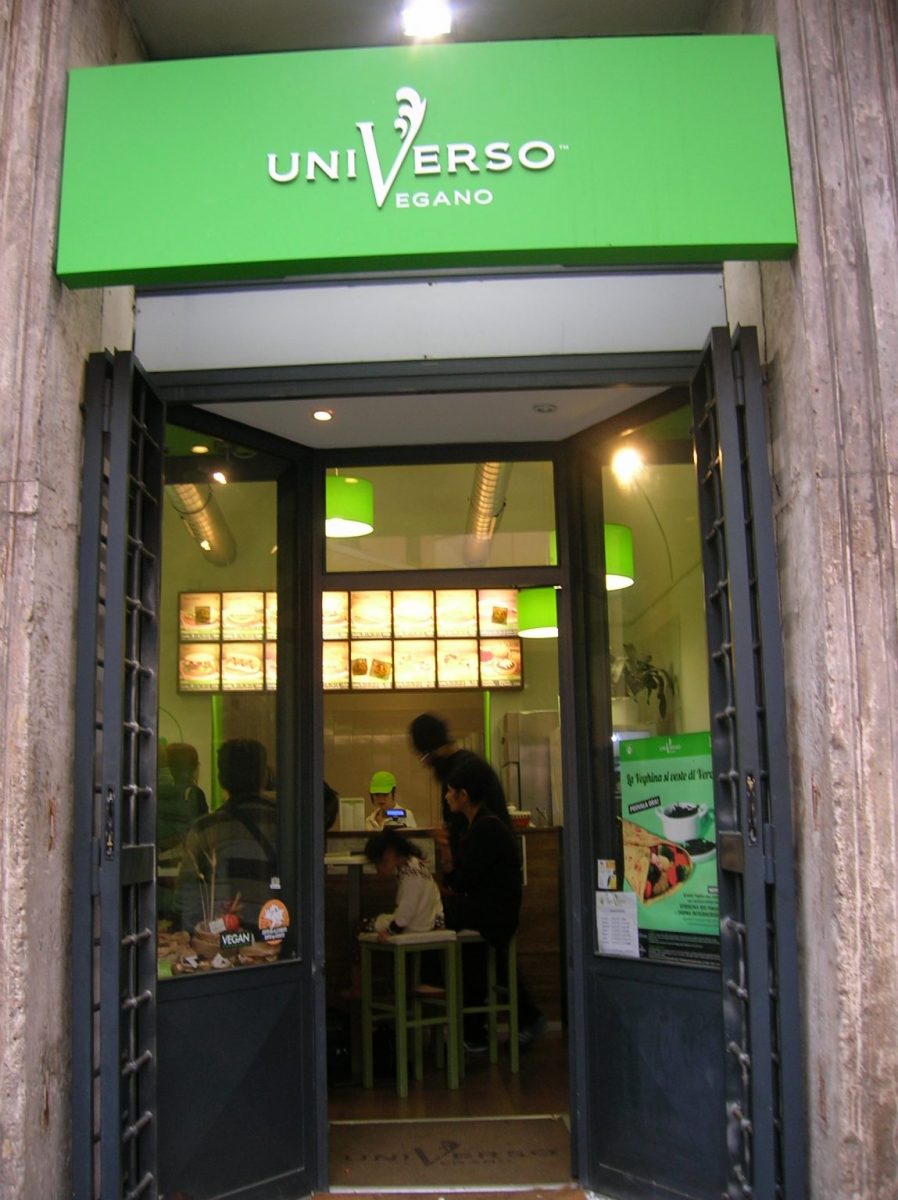 Universo Vegano is a bit like a hamburger joint, kebab shop, pizzeria, hot dog stand, piadineria and fancy restaurant dessert trolley all rolled into one and veganized.

While their original focus was on fast food options ranging from mushroom burgers to focacce to a whole series of piadine (known as veghine here), they’ve recently expanded the menu to include a broad range of pizza, risotto and even pasta dishes like lasagne and cannelloni.

The dessert menu really rounds off the offerings here, making Universo Vegano a one-stop shop for any possible craving you might have for Italian food. When they first opened they had a few vegan sweets, including a chocolate and pear tart and even a tiramisu (called a vegamisu in typical Universo Vegano fashion).

While I was thrilled to be able to enjoy tiramisu again, I had to admit that it didn’t really live up to my memories of the espresso-flavored dessert par excellence. Since then, however, they have revamped and expanded their dessert menu, which now outdoes even most non-vegan establishments in the country. 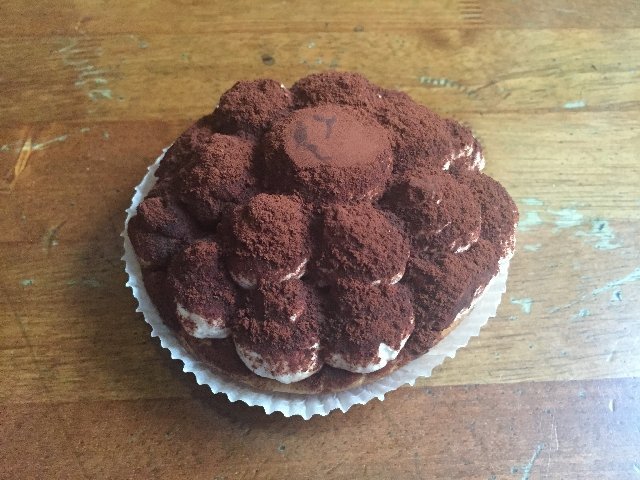 The tiramisu at Universo Vegano is out of this world!

Seriously, the cakes and tarts now on offer at Universo Vegano look even better than what you would find in a typical Italian restaurant. While I’ve not yet had the chance to try all of them, I can say with confidence that the tiramisu is phenomenal! It ranks among the best I’ve ever tasted, vegan or not.

Another change I’ve noticed at Universo Vegano is in their messaging about veganism. The first time I visited their location in Rome just off Campo de’ Fiori, the walls were covered with pictures of farmed animals.

While the slogan “friends not food” is still stenciled onto the wallpaper, the animal photos have been replaced with artsy images of beans, grains and other staples of a healthy plant-based diet.

I suppose the owners are experimenting to see which message is most effective – something we should all be doing if we care about saving as many lives as possible. 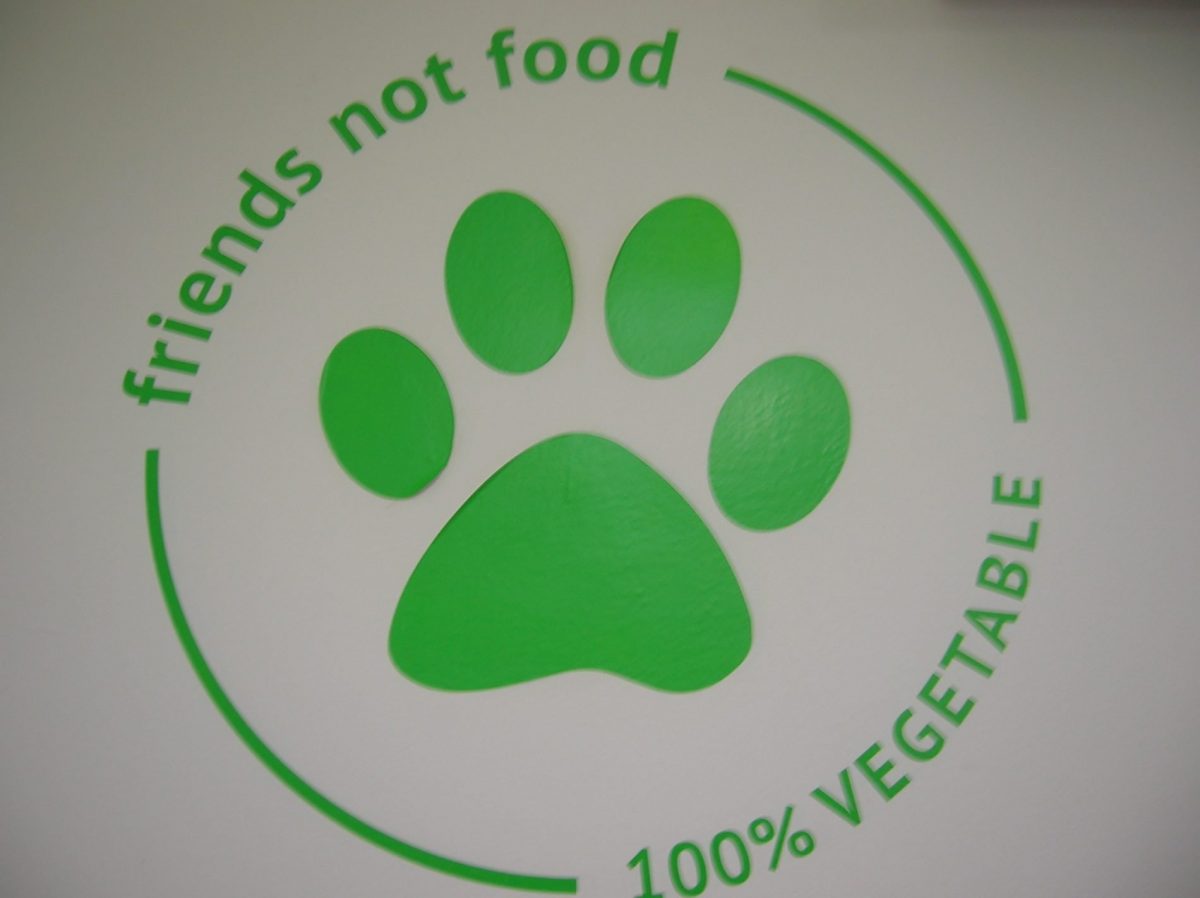 Animals are "friends not food" at Universo Vegano

Like Universo Vegano, in the short time since it first opened Veggy Days has also been experimenting with different offerings. Franchise owners can choose between two modules: the fast food option known as Veggy Burger or the more upscale version called Veggy Risto.

In addition, owners may choose to add the Veggy Café and Veggy Hour module (a café and bar serving alcoholic and non-alcoholic drinks), the Veggy Market module (a shop selling vegan staples like nutritional yeast, beans and lentils, as well as sweet and savory snacks), or the new Veggy Pizza module (serving…you guessed it! Vegan pizza). 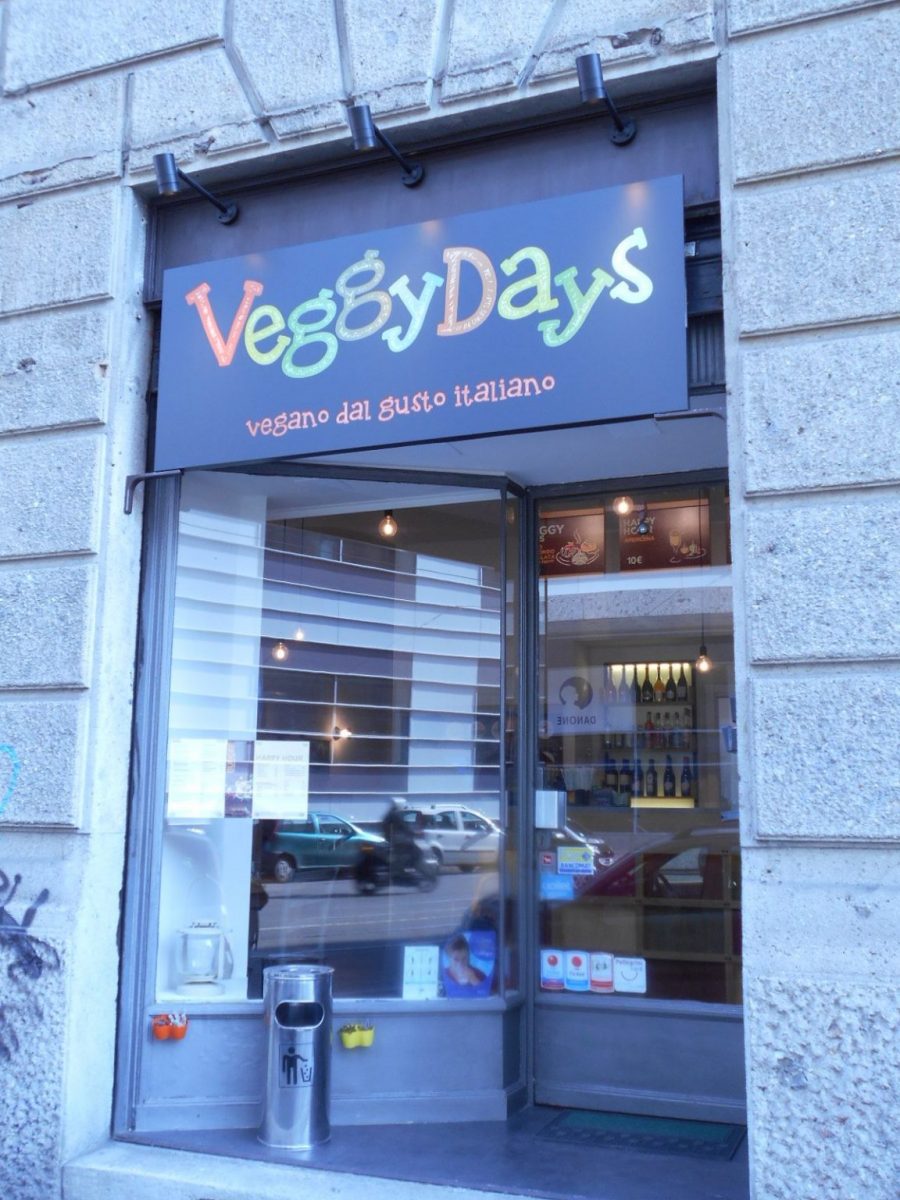 I had the pleasure of visiting the Milan location just a couple of months after its grand opening. Here the owners have opted for the Veggy Burger module along with the optional Veggy Café, Veggy Hour and Veggy Market.

Even though I was a bit disappointed not to be able to try out the delicious-looking Risto menu with its carbonara and its gnocchi gratinati, the Veggy Burger menu does actually include a number of non-burger dishes, such as “magic forest risotto” and seitan with peas and porcini mushrooms.

It also has a pleasant atmosphere that makes it feel more like a proper restaurant than Universo Vegano. While the format is still “self-service”, meaning you order at the counter, the dining area is filled with proper chairs and tables rather than bar stools and counter tops.

The fact that they manage to provide such an attractive atmosphere and high-quality, organic food while still charging fast food prices is truly impressive. 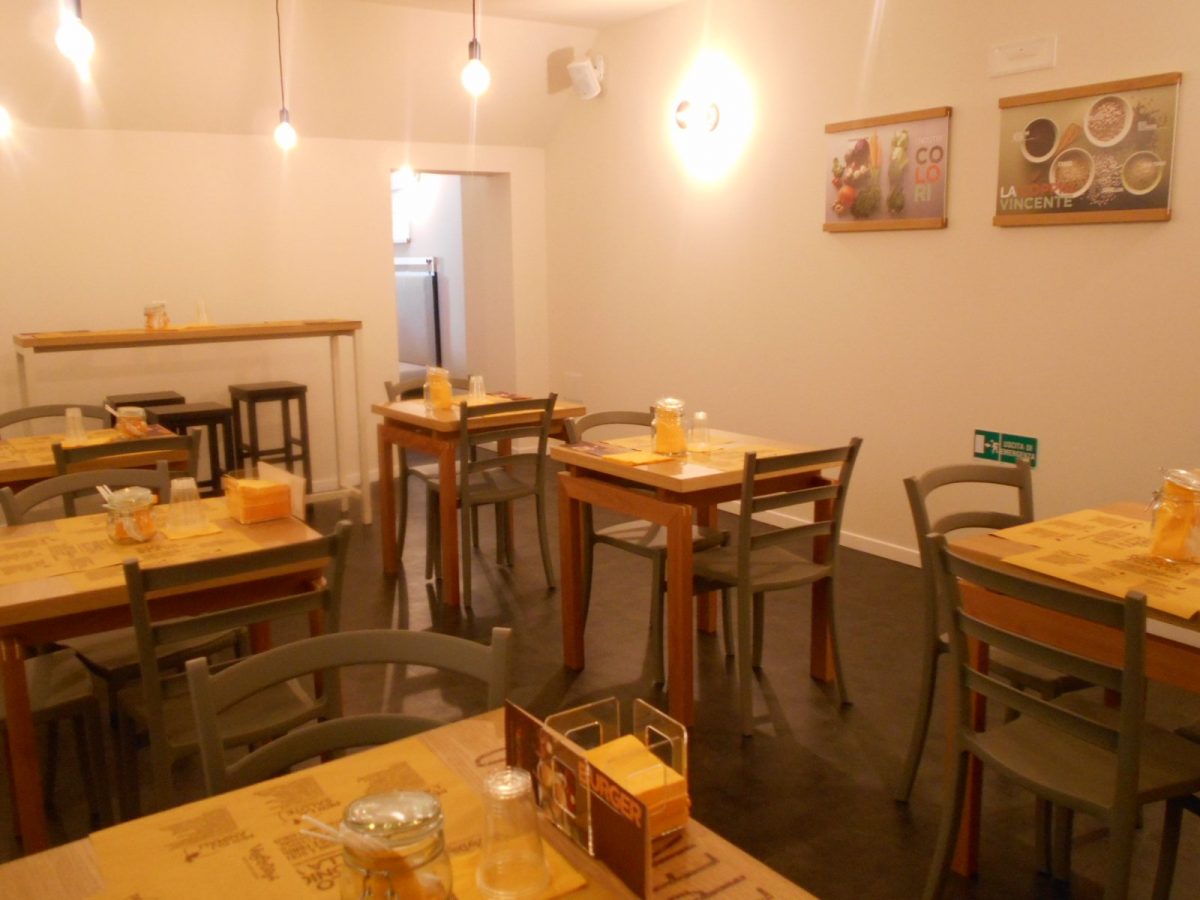 Veggy Days offers fast food with a touch of class

All over Italy, the fast food landscape is becoming more healthy, sustainable and compassionate every day.