Hiking through Nature’s Wonders in the Vikos Gorge

Following our departure from Ioannina, after much confusion we eventually arrived in a small mountain village called Monodendri.

I will spare you the details and just leave you with this piece of advice: when travelling to Monodendri, or any other out-of-the-way village where buses don’t often venture, make sure that the bus driver – and not just the conductor who rips your ticket when you board and then exits the bus before it departs – knows where you want to go.

Monodendri does have a handful of restaurants catering to tourists, but most of them seem to focus heavily on grilled meat. I actually saw three lambs’ heads turning on a spit at one of the restaurants we passed.

Or maybe they were goats – it was hard to tell when they no longer had their skin – but in any case it was a horrific sight. When our stroll around town didn’t turn up anything appealing, we ended up dining back at our hotel, the Archontiko Zarkada, which offered bean soup and gemista (tomatoes and bell peppers stuffed with rice). 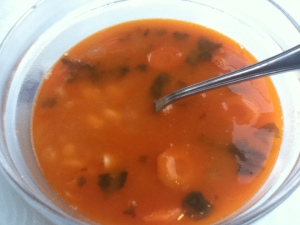 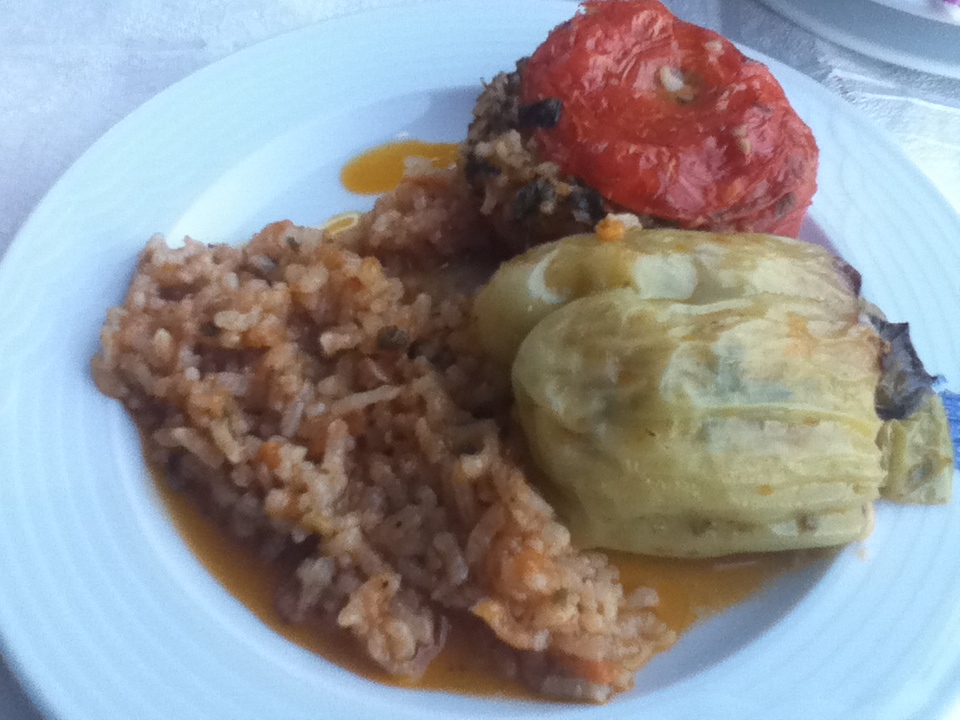 As it happens, those were the same dishes I ate the last time we were in a tiny village in rural Greece, when we stopped in Omalos on our way to the Samaria Gorge on Crete, so I guess it’s pretty standard fare in the countryside. In any case, it was a hearty and tasty meal and was good fuel for the workout we would get the next day.

Like Omalos, we were also using Monodendri as a gateway to a long hike through a beautiful gorge – in this case the Vikos Gorge in the Zagorohoria region of northern Greece. This one was even more spectacular than the Samaria Gorge – it is the world’s deepest according to the Guinness Book of World Records – and on top of that we had it practically to ourselves, which made the experience all the more special.

While up to 3,000 people per day strap on their daypacks and hike the Samaria Gorge in the high season, in the Vikos Gorge we walked for several hours without seeing another person. It’s a world away from the crowded beaches of Mykonos and other popular Greek destinations.

The hike, while more difficult than the Samaria Gorge, was a truly uplifting experience and definitely worth the effort. Standing at the bottom of the gorge and gazing up at the sheer cliffs towering above us on either side was something I’ll always remember. 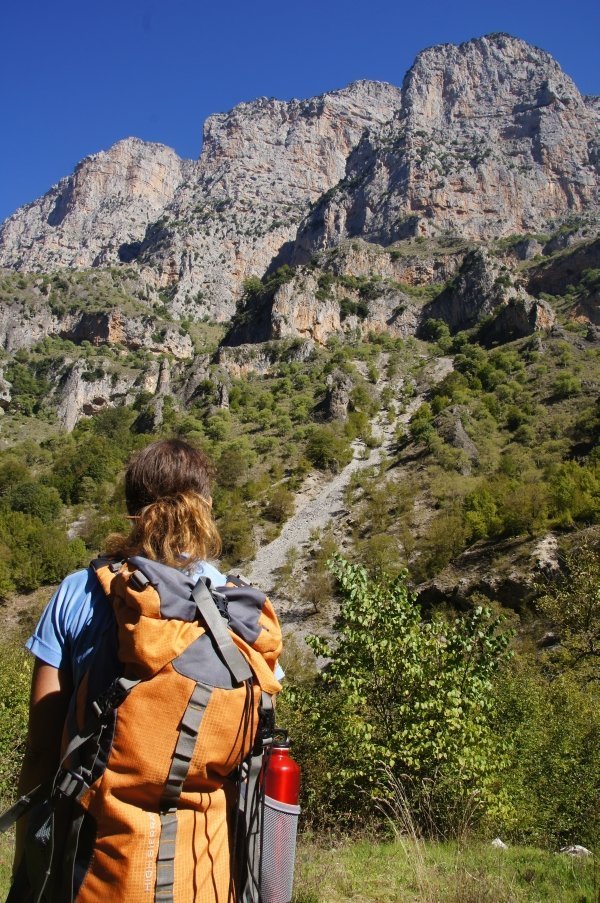 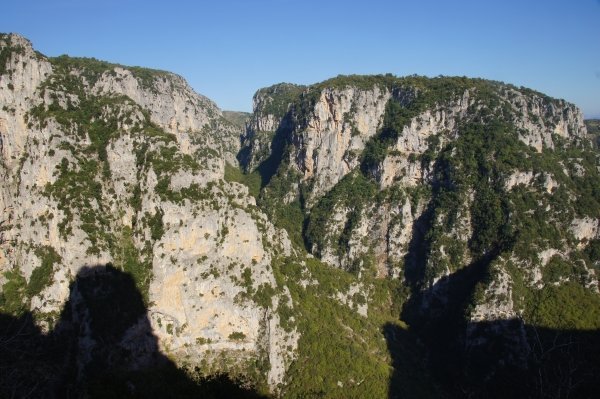 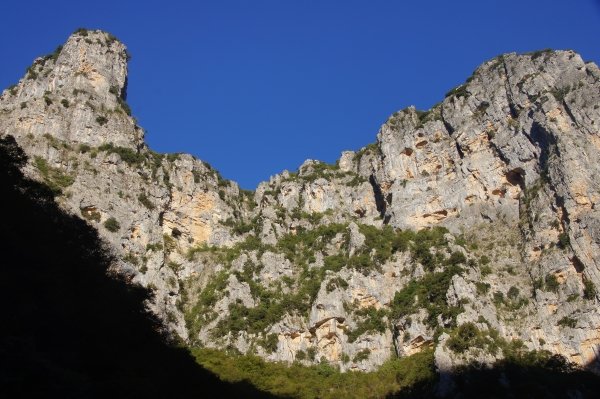 If you decide to attempt it – and I highly recommend that you do – be sure to bring some food with you before you arrive in Monodendri, as the scant provisions available there consist mostly of cheese, wine and olives.

You will definitely need a packed lunch for the hike, which takes 6 to 7 hours from Monodendri to Mikro Papingo. We hadn’t really thought about this beforehand, but luckily I still had some peanut butter and some sun-dried tomato pesto I had picked up for breakfast in Thessaloniki, and we were able to get sliced bread from the hotel, so we made do with that.

Our hike eventually led us to Mikro Papingo, a stunning village perched on the mountainside where all the houses are made of stone and topped with slate roofs. 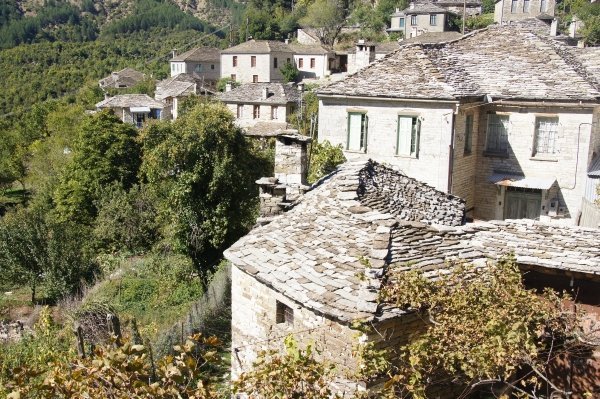 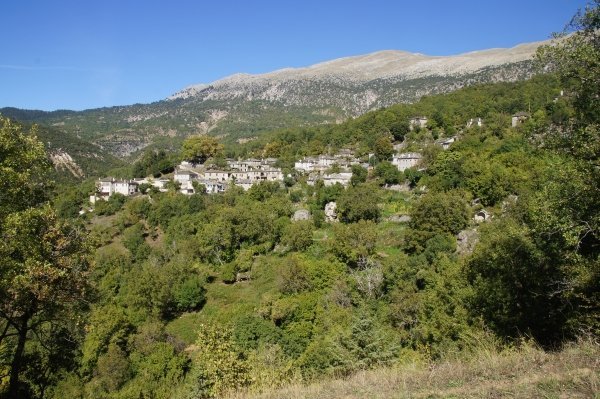 It’s the kind of place where time appears to have stood still for the past few hundred years. Come dinnertime, we were ready for a proper meal, and the Dias Hotel and Restaurant where we were staying did not disappoint. As a starter, I had the cabbage salad, which was actually a combination of cabbage and shredded carrot. Here’s a tip: when you see items on a Greek menu such as “tomato salad”, “lettuce salad”, etc. it’s worth asking what’s in them, as usually, it’s more than just the one ingredient in the name. 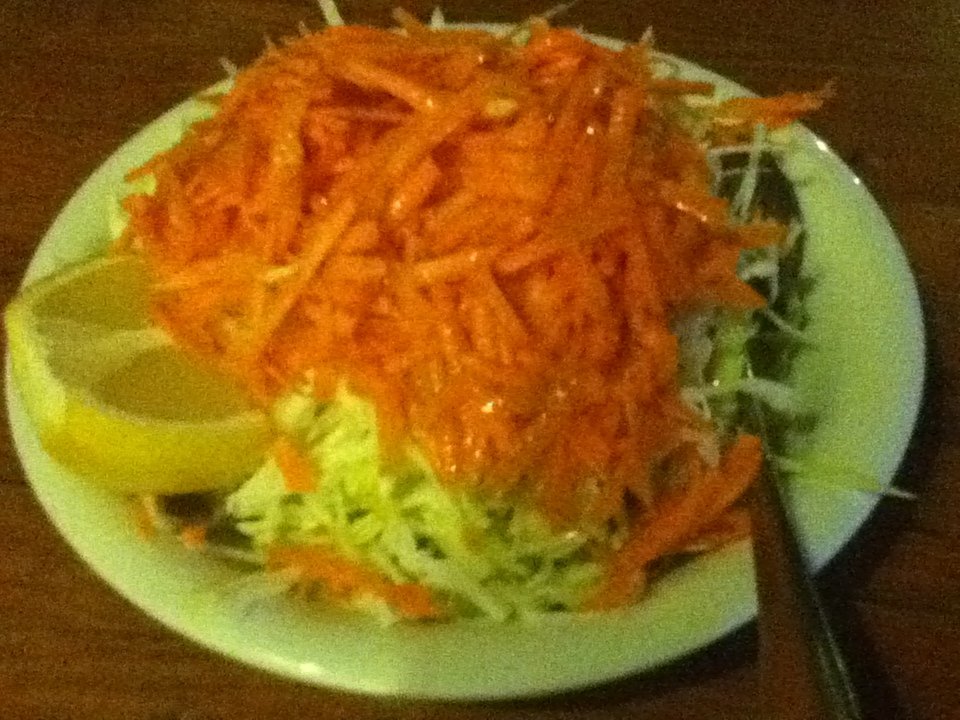 This was followed by a huge plate of briam (eggplant, zucchini and potatoes baked in the oven). 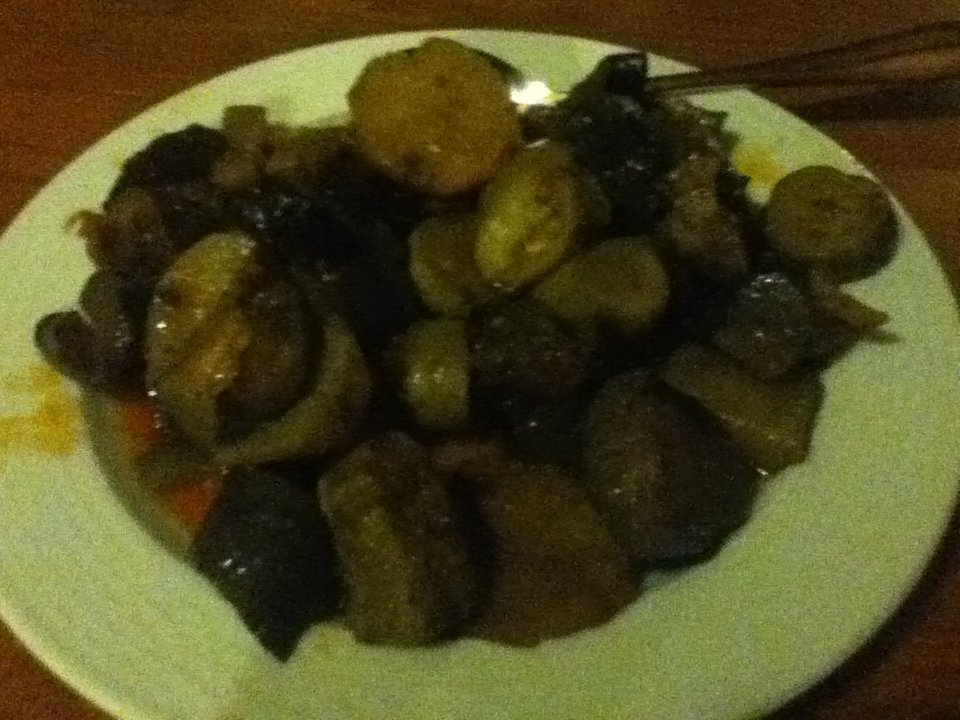 Hearty, country-style home cooking at its best. The owner even brought out a large bunch of grapes at the end of the meal. 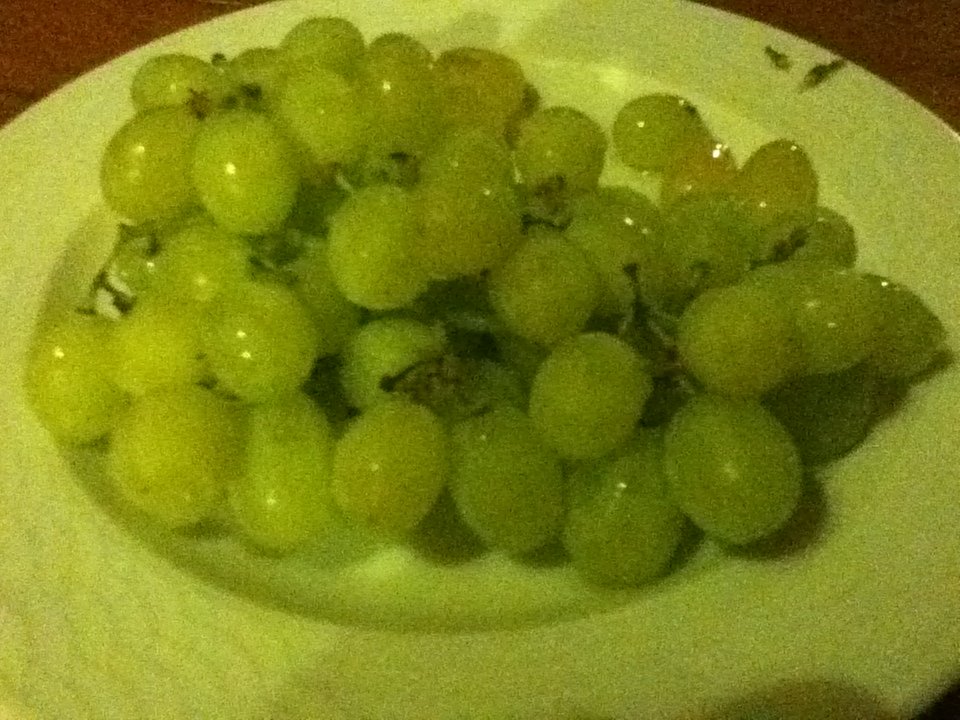 The Vikos Gorge hike from Monodendri to Mikro Papingo is just one of many options in the area. For a less strenuous hike that doesn’t climb down into the gorge but offers beautiful views of it from above, see this alternative:

Contributed by Ivan of Mind the Travel 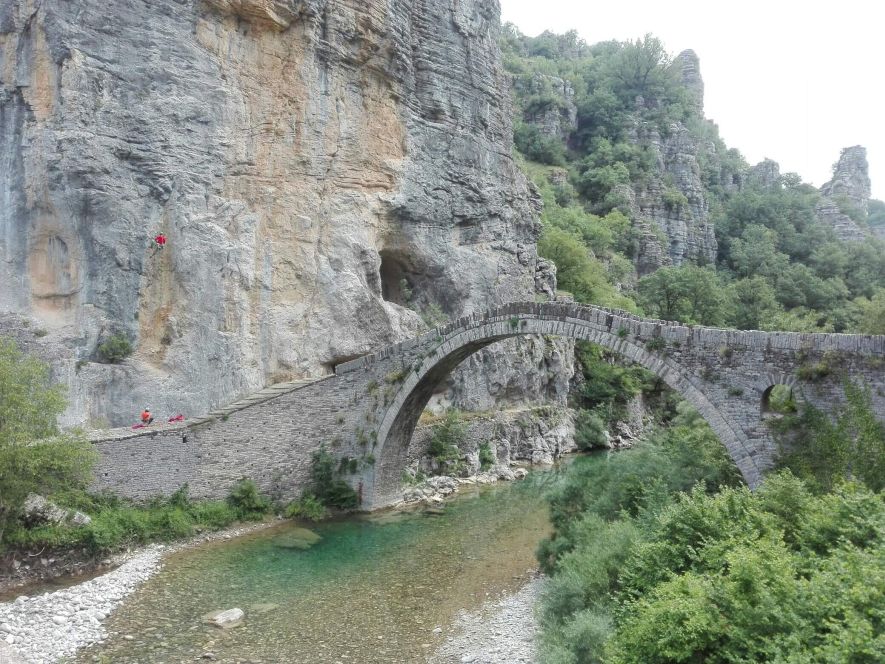 The village of Monodendri is the most popular jumping-off point for exploring the Vikos Gorge. It’s a charming laid-back stone village filled with walled stone courtyards, fortress-like gates, century-old buildings and some of Greece’s most staggeringly beautiful landscapes. From here you can hike north to Vikos or south to Kipi along the dry river bed. Located on the rim of the Vikos Gorge near the south end, Monodendri is a good spot for hikers not eager to make the strenuous gorge hike but willing to view the graceful arched stone bridges over the river below the gorge.

The main hike takes you some 8km along the tarmac road as well as the old cobbled pathway from the village of Monodendri to Kipi. It is a relatively easy hike, although you should be prepared for high elevations. The hike can take anywhere from 5 to 6 hours depending on the nature of your hike.

The mountainous region of Zagori is home to several 18th-century packhorse bridges. These one-, two-, or three-arched bridges were parts of cobblestone roads that linked Kipi, Monodendri, and Vitsa until roads were opened in the 1950s. Local families contributed to the construction of old arched stone bridges and were largely named after them.

One will only need a guidebook and a map to spot the arching bridges and the stepped kaldermi paths that lead upward to the various villages. The Missios Bridge lies some 2km east from Vitsa; the Noutsos bridge (also known as Kokoris bridge) is beside the main valley road; the Knododimou is situated between Kipi and Koukouli, and some others are either side of Kipi. An artistic, caterpillar-shaped Plakida bridge is downstream and three more are upstream from Kipi. 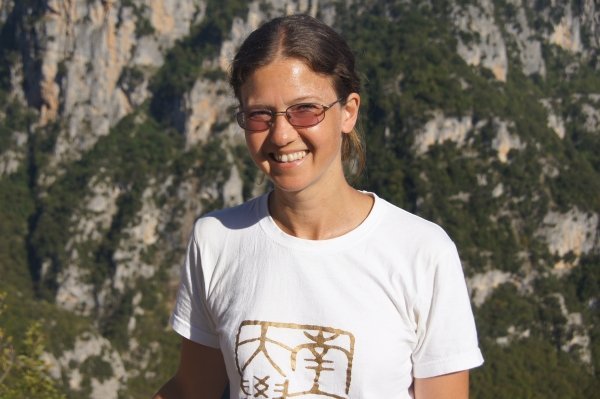