Home Crete Hiking through the Samariá Gorge on Plant Power

Hiking through the Samariá Gorge on Plant Power

A hike through the Samariá Gorge has become de rigueur for just about anyone traveling in Crete, and for good reason. The scenery is spectacular, and the walk also provides a good opportunity to catch a glimpse of the rare kri-kri, a species of goat that lives only in this part of the island.

People who just want a lazy beach holiday tend to visit the famous beaches of Mykonos or other islands in the Cyclades. But those who come to Crete tend to explore a bit more and enjoy the island’s incredible inland scenery.

While there are other beautiful gorges in Greece (one of which we’ll visit later on, so stay tuned), the popularity of Samariá is also partly due to its accessibility from other popular tourist destinations in Crete, like Chania. To get there, take a bus from Chania to the tiny hamlet of Omalos.

Without going into the drama of our own bus journey, which involved a hand-drawn map from a local teenager, lots of arguing in Greek (which we don’t speak) and ultimately some hitchhiking with friendly fellow travelers, let me just say that it’s important to make sure you have the most up-to-date version of the bus timetable, as changes to it are frequent, while buses are not.

Once we had arrived in Omalos, we ate dinner at the restaurant attached to the Neo Omalos Hotel where we were staying, and I ordered a hearty bean soup followed by gemista (the stuffed tomato and bell pepper dish that I had first tried at Agrimia in Rethymno). 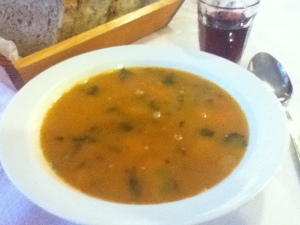 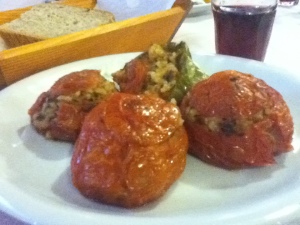 In case you haven’t noticed, I like to try new foods whenever possible. Now I know it’s hard to keep track, so I’d just like to point out that this was our eighth full day in Greece, which means that after eating 16 lunches and dinners this was the first time I had to order a dish that I had already tried once before on the trip.

And even then, that was only because we were in the middle of nowhere in rural Greece, in a restaurant with no written menu, where the waiter comes to each table and describes the five or six dishes available that day, which did, in fact, include a vegan option among the main dishes, plus a vegan soup that I had never tried (or even seen) before.

My point here is that there is an ASTOUNDING variety of vegan dishes on offer in Greece. Trust me, there is absolutely no danger that you will get bored of eating the same thing every day. 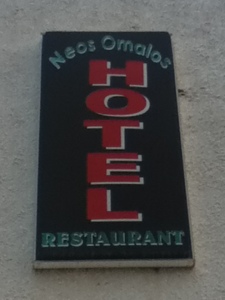 Now, if you stay at Neo Omalos I do recommend that you inform them in advance of your need for nistisimo food, just to be sure, as there are not many other options in Omalos. In our case, Nick had made the booking some time ago and had asked if they could provide vegetarian or vegan fare (at that time I was eating a vegetarian but not yet 100% vegan diet).

They had responded by saying only that they could accommodate vegetarians. Obviously, this was just because they were not familiar with the term “vegan”. If you specify by saying “nistisimo without seafood” when booking then this should make things more clear.

Since breakfast was included in the room charge, after dinner I asked if there would be any nistisimo food for breakfast. The staff said that the only options among the normal offerings were bread and marmalade, but then they offered to make a spinach pie just for me, and of course, I took them up on the kind offer. More greens for breakfast!

The next day we rose early, packed our hiking gear and trail snacks, and took the first shuttle to the gorge entrance in an attempt to beat the crowds, which I’d say was pretty successful. Sure, there were other tourists on the trail, but it wasn’t so crowded that it detracted from the experience. The gorge was nothing less than spectacular, particularly on the second half of the 16-kilometre walk. It became increasingly narrow, and the walls seemed to close in on us as they towered overhead. 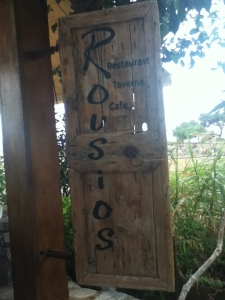 The hike ended when we reached the coast at a small settlement called Agia Roumeli. We had a few hours to kill there while we waited for the boat to Loutro, so we looked for an inviting restaurant where we could lazily drag out a long lunch and rest our feet. We had brought along some nuts and dried fruit to hold us over while we hiked, but we were definitely ready to reward ourselves with a proper meal by the end.

There are quite a few touristy-looking restaurants near the harbour, but none of them looked as appealing as Rousios, the first restaurant we passed on the way into town. So, after confirming the boat departure times at the dock we decided to head back there to the lovely garden and terrace looking out over the water.

As a starter I ordered the dakos, a local Cretan specialty made with rusks, tomatoes and (normally) cheese, but I, of course, asked for mine without. The waiter was not very impressed with this request and informed me that dakos without cheese was not dakos, but in the end, he agreed to put the order through. Well, I’ve got news for him; dakos without cheese is awesome! 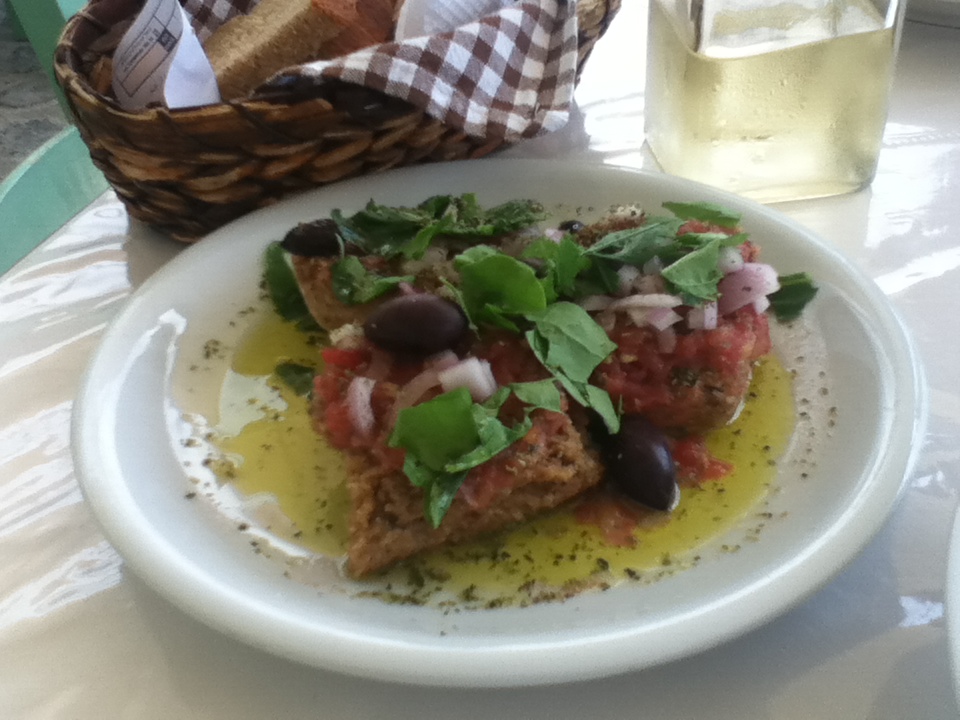 To be honest, when I ordered it I was unsure myself about how good it would be. When I first read about dakos I had no idea what a rusk was. The bit of research I did seemed to indicate that they were the pieces of dry, crusty bread called zwieback in Switzerland that are often found in hotel breakfast buffets. You might know them as melba toast.

I have never understood the appeal of these crumbly bits of stale bread that always fall apart in your hand as soon as you try to spread them with jam, peanut butter or anything else that might make them edible. Fortunately, I am happy to report that dakos have nothing to do with this sad excuse for a breakfast food.

Rather, they are large, thick cuts of bread that, in this case, had been baked on-site in the restaurant’s wood-fired oven. True, they are quite hard and dry initially, but when served as dakos they are first moistened with water and olive oil to soften them up, then topped with chopped tomatoes, olives, purple onions and basil. Delicious!

For my second course I ordered the chickpeas, which were served Greek style in a tomato-based sauce with herbs and spices. It doesn’t really look like all that much food, but I was absolutely stuffed by the end of the meal. 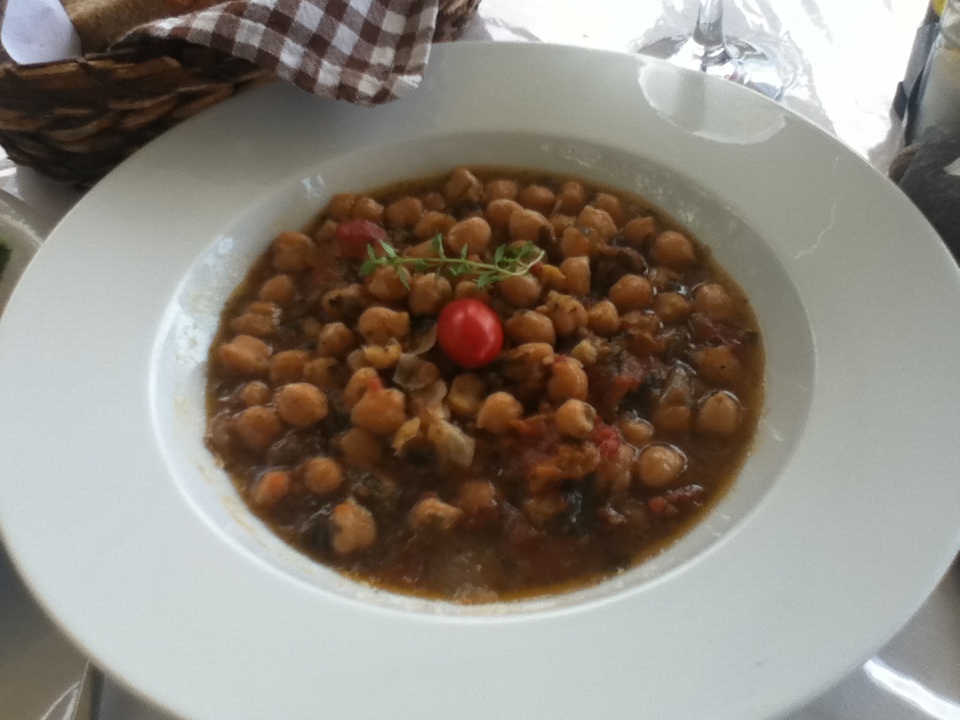 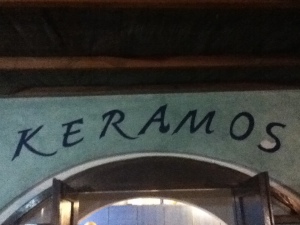 That evening we arrived in Loutro, a tiny, white-washed fishing village a bit further along the coast that has remained very isolated and is still only accessible by boat or on foot. At dinner time we walked from one end of Loutro to the other (which took all of five minutes) and decided to eat at the very last restaurant at the end of the village, which was a decidedly friendly place called Keramos.

Like most places in Loutro, their specialty was grilled seafood, so they didn’t offer any of the usual vegan main dishes, but they did have several starters and salads to choose from. I was still pretty full from lunch at that point, so I chose a fairly simple meal of boiled wild greens and potatoes baked in the oven. The two complemented each other nicely, and the incredible view out over the bay with the waves softly lapping at our feet made them taste even better.

OK, now are you ready for some romantic “mood lighting”? I promise that once I get through this backlog of Greece posts you will see a dramatic improvement in photo quality (thanks again for the birthday present, Nick!), but until then I’m afraid there will be a few night shots taken with an old iPod touch, like these, where you will have to use your imagination. 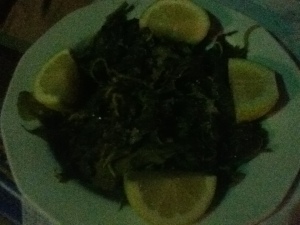 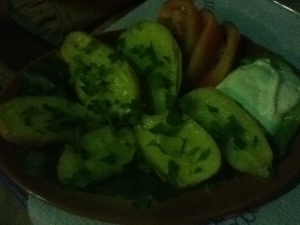 Oh well, you already know what greens and potatoes look like anyway, don’t you? How about I make it up to you with some gorgeous shots of Loutro itself and the Samaria Gorge (taken by Nick with a much better camera): 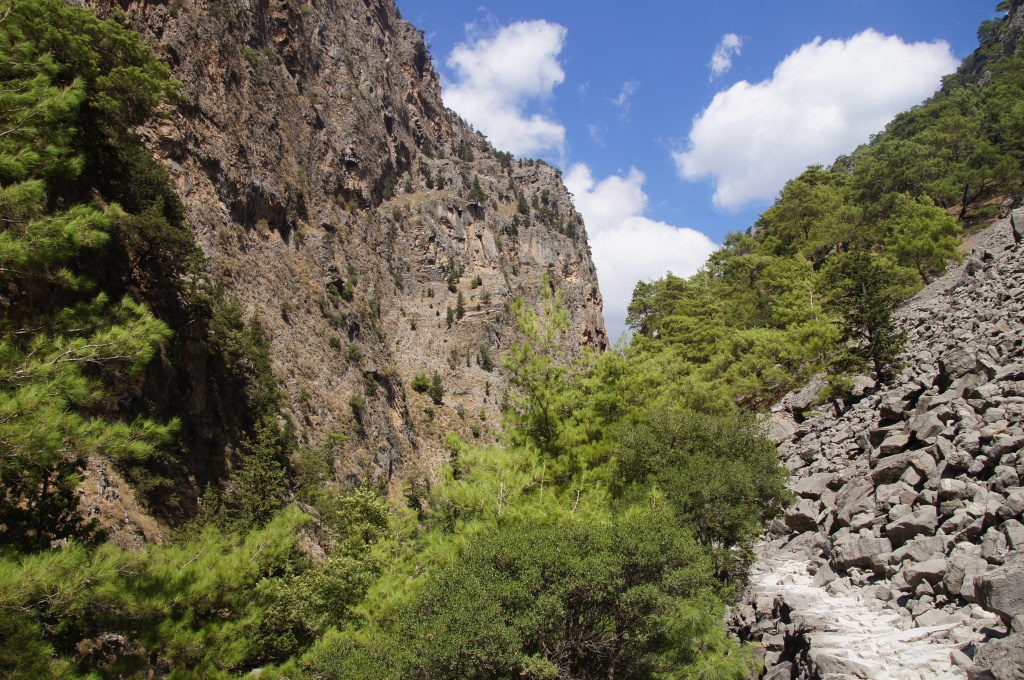 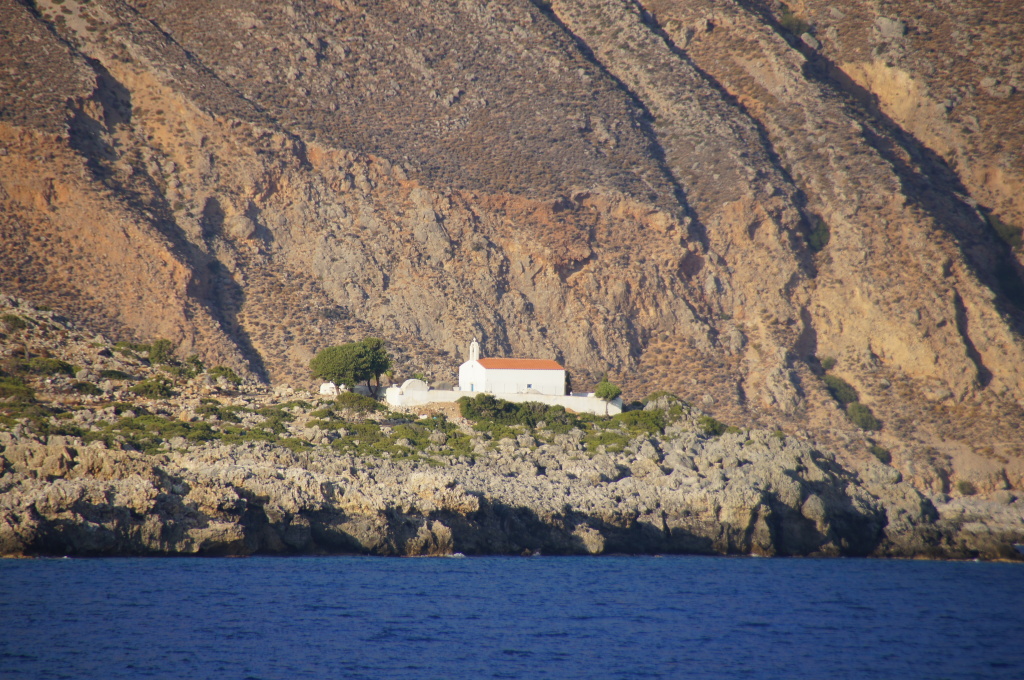 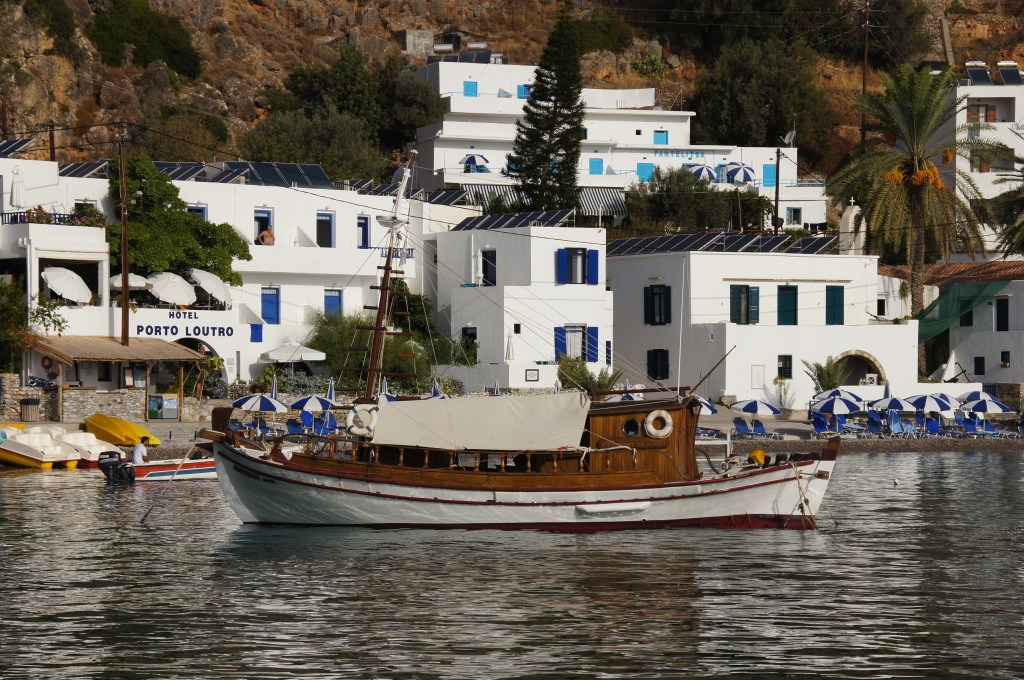 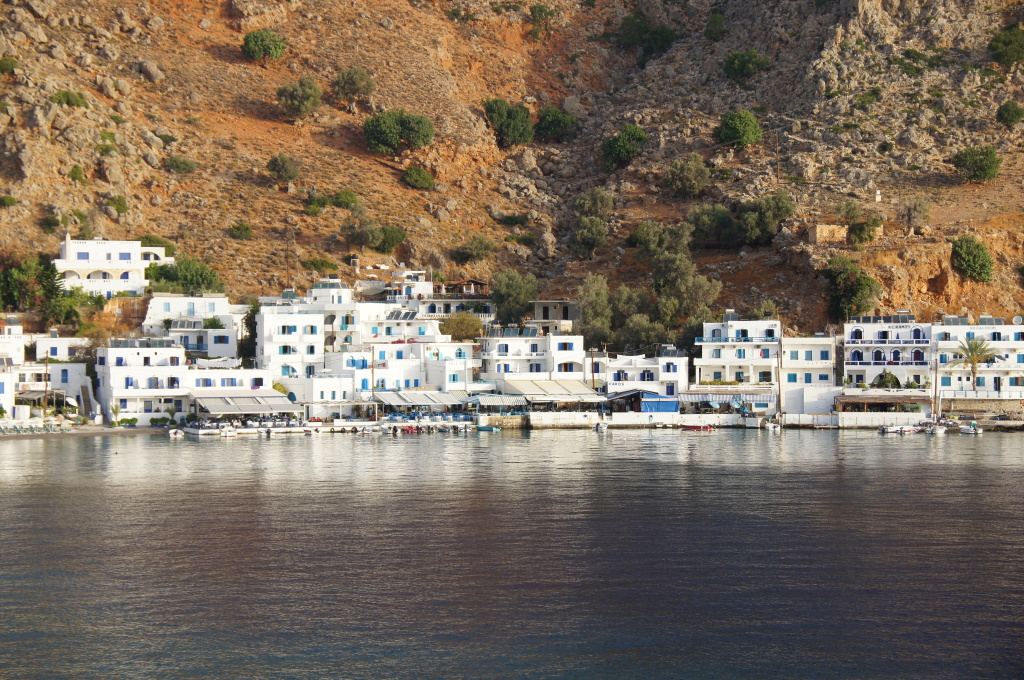 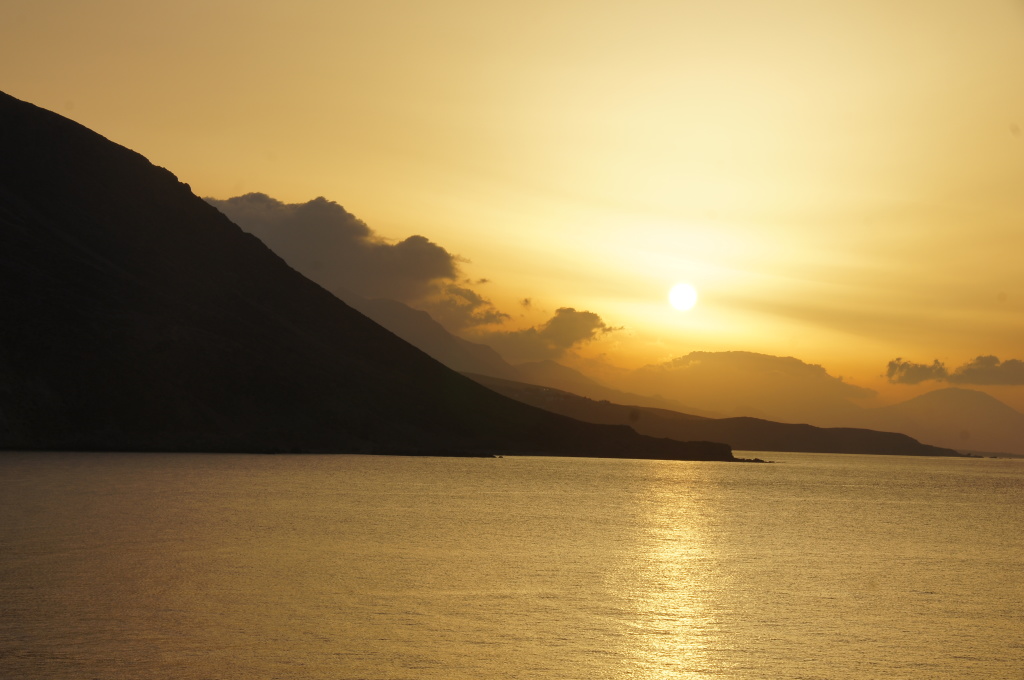 Stunning, isn’t it? There’s even more natural beauty coming up in the next post, when we head to a different island with a very different history and landscape – Santorini!