Home Graubunden Ice Skating Down a River & other Adventures in Graubünden

Ice Skating Down a River & other Adventures in Graubünden

This post continues with the Switzerland-as-a-winter-wonderland theme that began in my previous post about our very snowy trip to Evolène.

This weekend we traveled even further in search of wintry adventures, heading all the way across the country to the canton of Graubünden in the far eastern part of Switzerland.

We went there for one reason only: to go ice skating. And yes, we do have a number of ice rinks in Geneva, but we don’t have a place where you can skate DOWN A RIVER.

Do you ever play movies of your own life in your head? And do these movies sometimes include scenes of things that you haven’t actually done but dream of doing? And do you also choose the soundtrack that you want playing in the background for these scenes?

I do this more often than I’d like to admit. This weekend, I finally got the chance to act out one of these scenes, which was like a (day)dream come true. It looked like this:

OK, so in the version in my head I’m not wearing a helmet, but hey, it’s Switzerland so, you know, them’s the rules. And to be honest it’s a pretty smart rule; the ice is quite bumpy and the track quite hilly, so it’s more dangerous than it looks. Also, it’s technically not a river but a man-made ice track called Skateline Albula that runs alongside the Albula River. But honestly, who cares about technicalities? The experience is just the same. 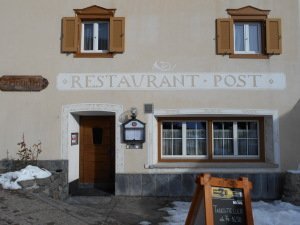 So thank you for indulging me while I channeled my inner Joni Mitchell; now let’s talk about what you really came here for — the food. Skateline is in a teeny tiny village in Graubünden called Surava, which as far as I could see has exactly one restaurant. Fortunately, you won’t need any more than that, because Restaurant Post is friendly and reasonably-priced and offers several vegan options.

I went with the spaghetti all’arrabbiata, but they also had spaghetti all’aglio, olio e peperoncino (another naturally vegan Roman specialty), and there were a couple of soup and salad options that looked like they might be vegan. The pasta dishes come in either small or regular portions, and the regular is pretty huge. You definitely won’t leave here hungry. 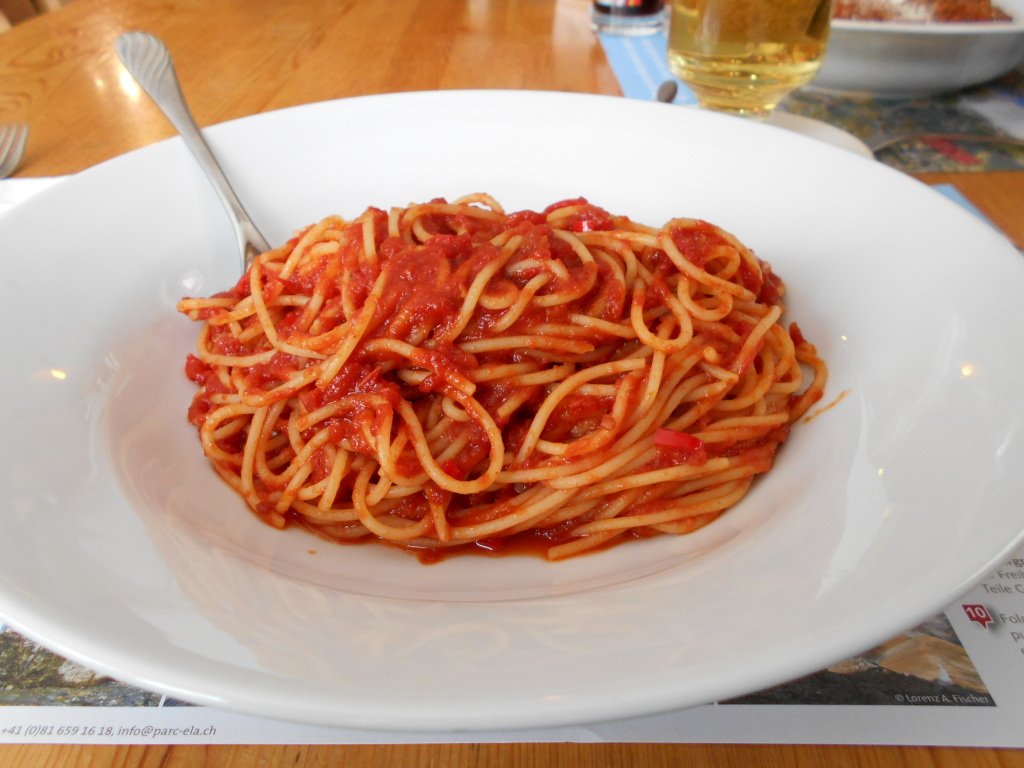 By dinnertime, we were back in Chur, the capital of Graubünden and the oldest city in Switzerland, which was where we had chosen to base ourselves for the weekend. Earlier in the day, as Nick was taking a photo of this mural: 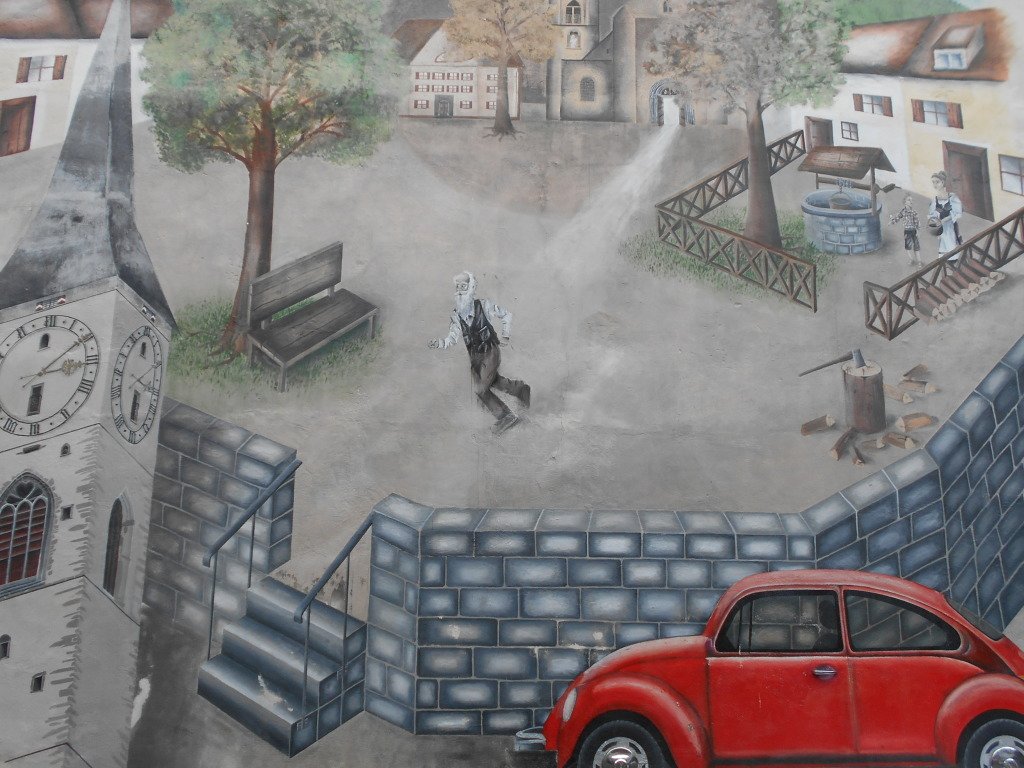 I noticed that there was a whole page devoted to vegetarian dishes, so we decided to get some vegan Thai food there for dinner.

An English version of the menu is also available, so just ask. I was spoilt for choice here and had a hard time deciding what to order, eventually settling on the vegetable Panang curry. 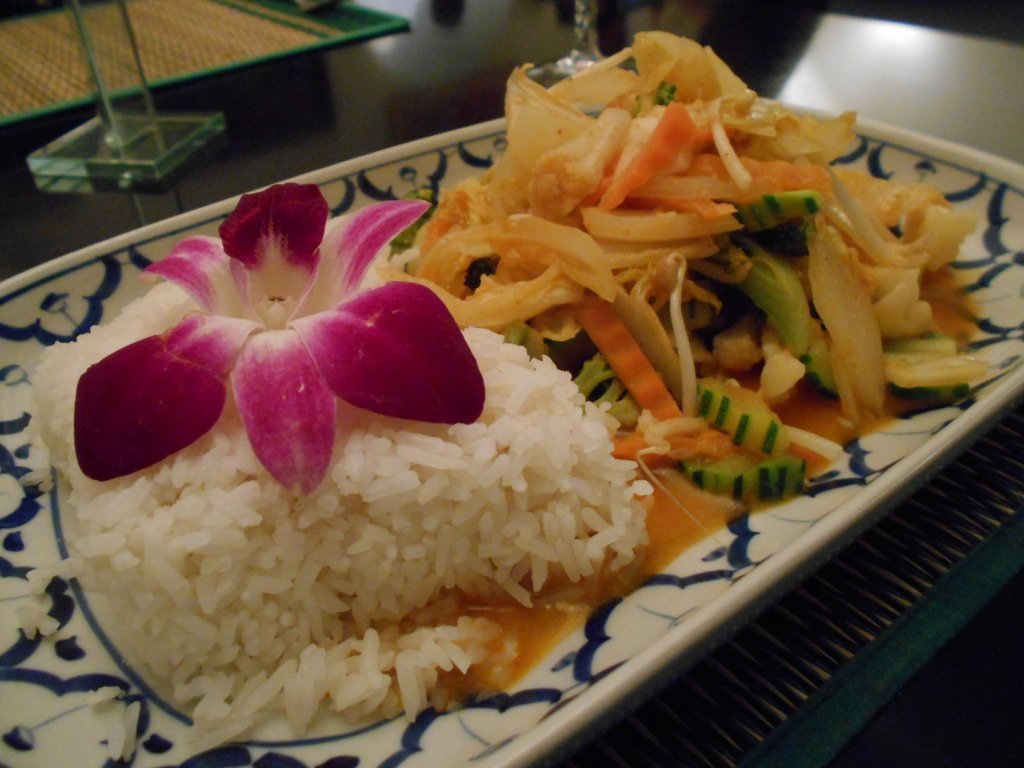 There was another dish though that sounded really intriguing; its Thai name was Tom Ka Het, and it was described as a Thai mushroom dish with coconut milk. I don’t believe I’ve ever tried this combination before, but I love mushroom and I love coconut milk, so….two great things that go great together?

I think I might have to look for a recipe and try it out. By the way, dishes here also come in two sizes but are labeled as “normal” and “large”. I went with the normal one and found it to be a perfectly reasonable portion. But if you’re really hungry, in the evenings they also offer an all-you-can-eat buffet made up of four dishes, one of which is a vegetable red curry.

At 25 francs, this is slightly cheaper than the large portion of red curry so is the better choice for ravenous vegans. Oh, and for dessert, they offer a selection of exotic Thai fruits.

I had contacted the Ambiente Hotel Freieck in advance to ask about vegan breakfast options but had not been as successful as with Hôtel Hermitage in Evolène. In my email, I had given some examples of vegan items that are typically found in Swiss breakfast buffets and had also asked if they could provide soy milk to use with muesli and cereal.

The reply I received was a one-liner that went like this: “Yes we have breakfast for everyone on this world” [sic]. This seemed a bit vague, so I decided to bring my own soy milk. And, since I couldn’t find just plain soy milk in a single-serving carton, I ended up trying strawberry milk for the first time in my life.

I asked again at breakfast to be sure, but as I suspected they did not have soy milk. This was not a problem since I had come prepared, but I would have appreciated it if they had taken my request a bit more seriously. Still, breakfast was yummy and included a lovely fruit salad that I used as a topping for my muesli, so the milk was not strictly necessary. 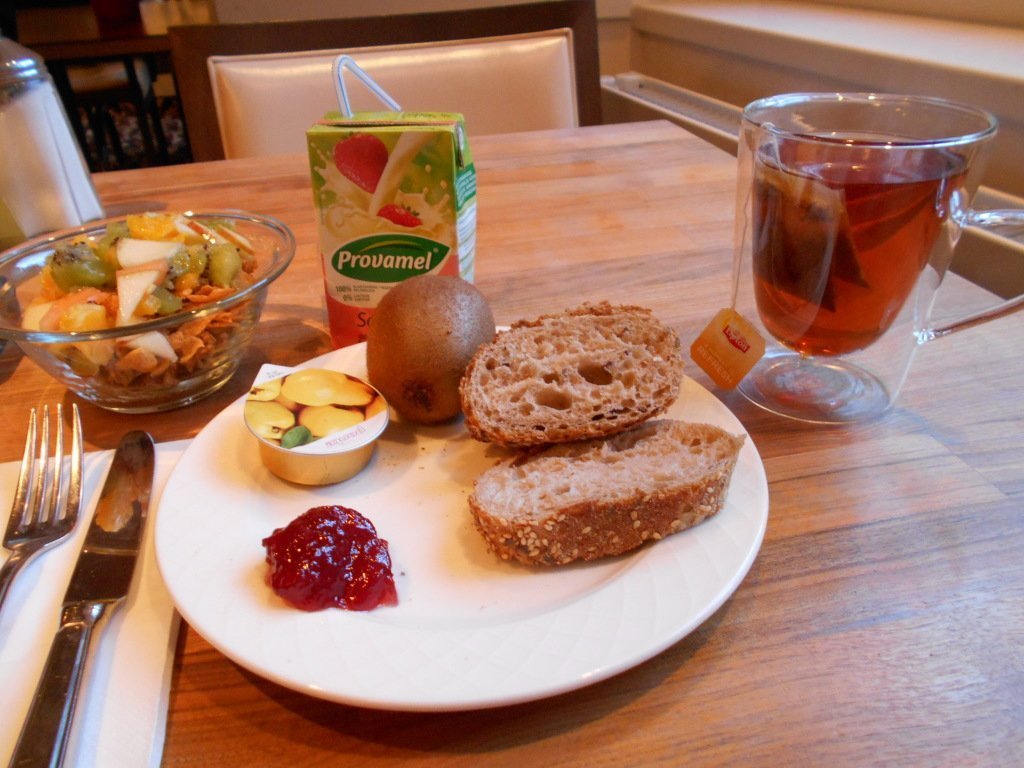 On our first morning there they even had fresh berries. Yum! 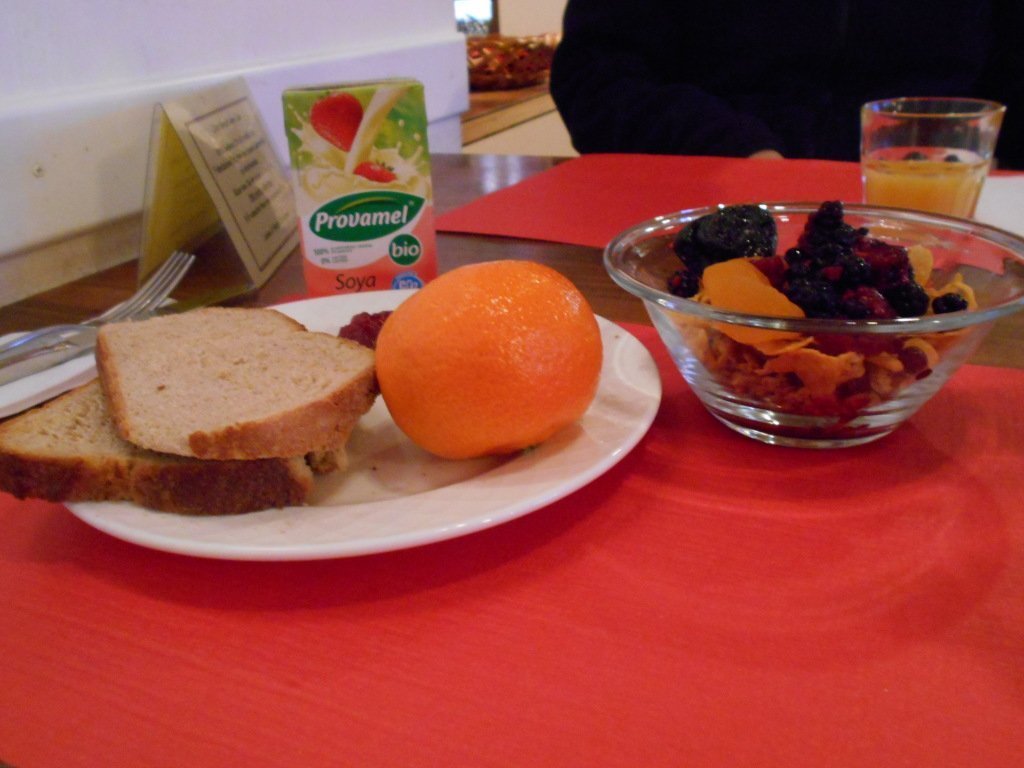 I was sorry that we couldn’t squeeze in any more meals in Chur, because there is an Italian restaurant there called Otello that gets great reviews online and has plenty of vegan Italian dishes on their menu. Oh well, something to save for next time! 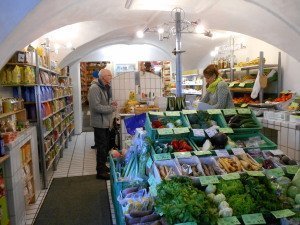 Another place you might want to check out if you’re in town is the Rägawurm health food store. They have a decent selection of fresh, organic fruits and vegetables as well as plenty of vegan chocolate bars and other treats. There is even a selection of baked goods, and the day I visited there were three that were clearly marked as vegan: 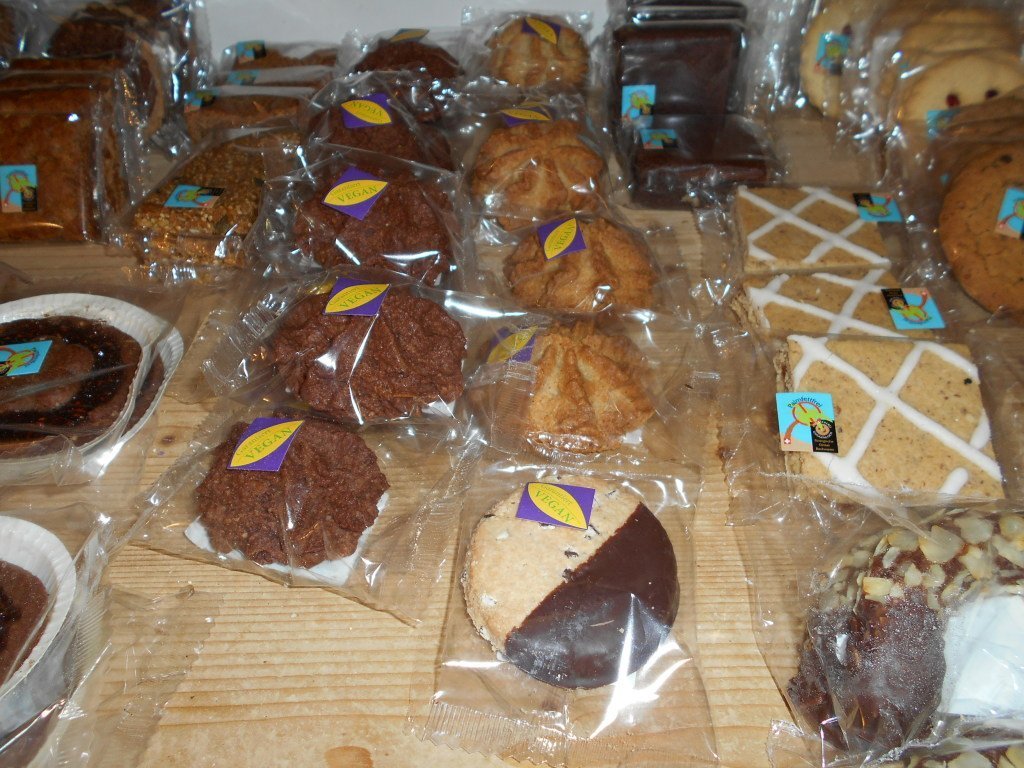 I couldn’t resist trying the dark one on the left, which was called a “Jumbo Igel”. Based on the shape and color I expected it to taste like a chocolate-coconut macaroon, but if I had looked at the ingredients beforehand I would have seen that in fact there was no coconut in it, just almonds, hazelnuts, chocolate, spelt flour and sugar.

It was still great, just not what I had expected! Actually, it was kind of fun to be surprised. Normally I know EXACTLY what’s in everything I buy, because I’m constantly scrutinizing ingredient lists, but when goods are clearly labeled vegan it feels like a luxury to just grab something knowing I don’t have to worry about what’s in it.

That’s it for our travels to Graubünden this time around, although it was not quite the end of the trip. On the way back to Geneva, we stopped for lunch at a VERY special restaurant in Zurich that I can’t wait to tell you about in my next post, so watch this space!