7 Top Lisbon Experiences that are Vegan-Friendly 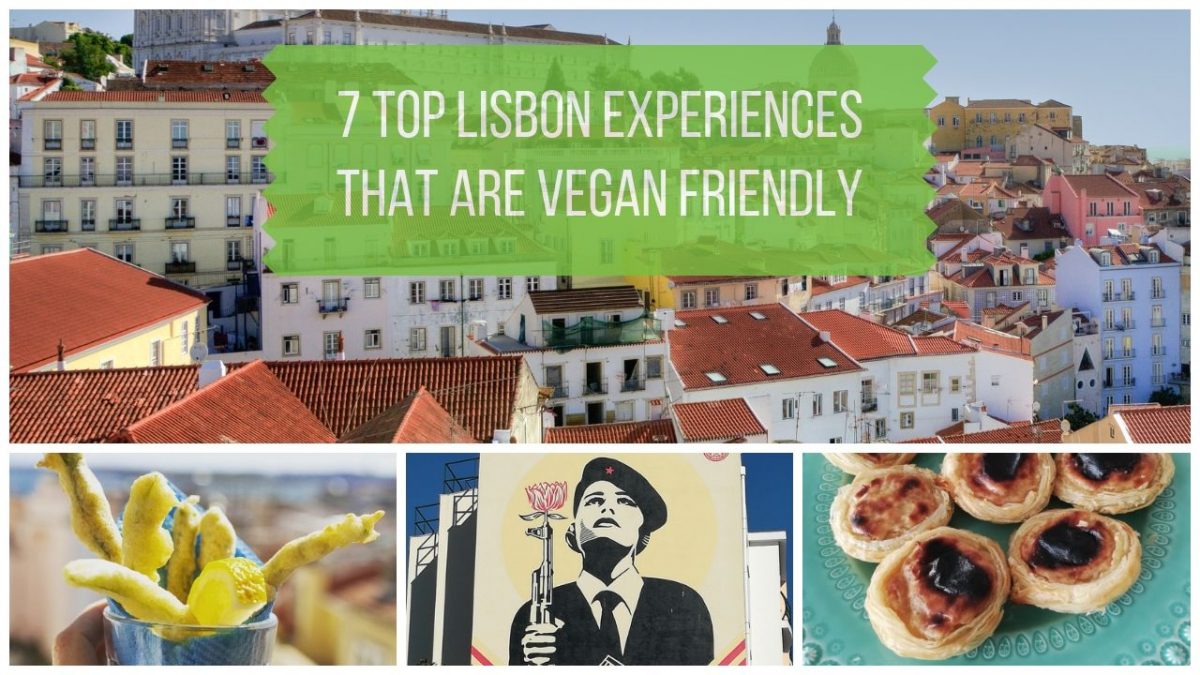 It seems everyone is talking about Lisbon, Portugal these days. It's certainly one of the hottest destinations in Europe, and for good reason.

This breathtakingly beautiful city offers so many things to do! I’ve been living in Lisbon for more than two years now, and I feel like I’ve barely scratched the surface.

But what if you're vegetarian or vegan? Many Lisbon experiences seem to revolve around food, and, sadly, traditional Portuguese food is not very vegan-friendly.

Don't worry though, you won't miss out on anything! In this Lisbon travel guide, you'll find plenty of Lisbon experiences that vegans can enjoy too, including vegan food tours and vegan cooking classes.

Add some of these vegan-friendly experiences to your Lisbon trip itinerary, and you're sure to have a fabulous time! 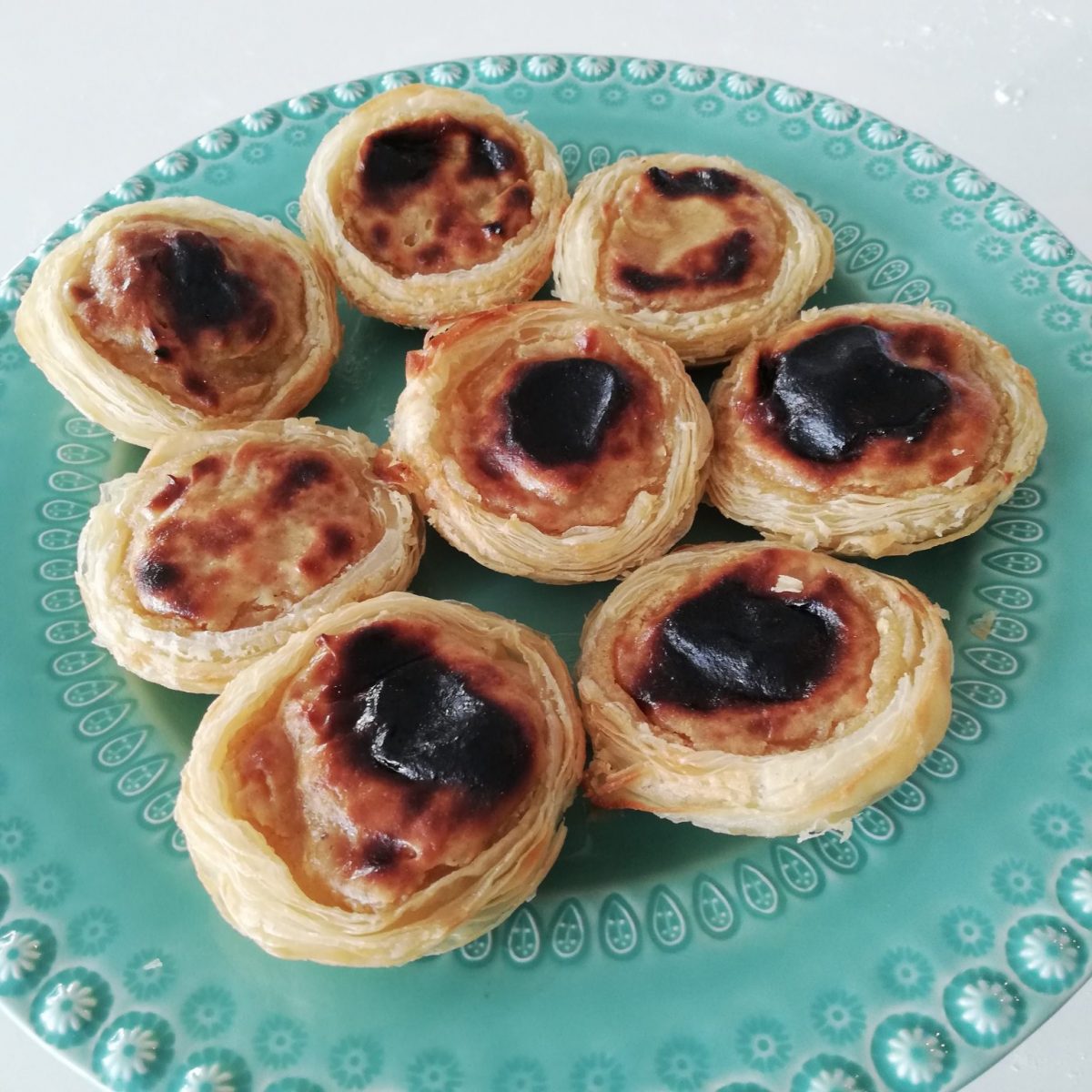 The pastel de nata, or Portuguese custard tart, is by far the most famous of Portuguese desserts.

Made with a mix of eggs, sugar and cream, the traditional recipe is definitely not vegan and is notoriously difficult to veganize.

But Ana Viçoso from Lisbon Cooking Academy has finally done it, and she’s ready to teach you how to do it too! I’ll admit, I was skeptical before joining this class. I’ve had a few sub-par versions of vegan Portuguese custard tarts, so my expectations were low.

But when I tasted the ones that Ana and I made together, I was blown away! Ana is a professionally-trained chef who takes her baking very seriously, and she has perfected the art of the vegan pastel de nata.

As an added bonus, during the workshop you’ll also learn how to make another vegan dessert – a carob brownie. Carob trees grow abundantly in Portugal, so it’s often used in local sweets as a substitute for chocolate. This one was scrumptious too!

Want to see what the class is like? Here's a video by Story at Every Corner of the whole baking process!

Local Tip: Visitors often get confused when they see the name for this dessert written two different ways -- pastel de nata and pasteis de nata -- so let me explain. Pastel is the singular form, and pasteis is the plural form. And the word for vegan in Portuguese is … vegan!

You can buy them already made at Da Terra, a local vegan restaurant in Lisbon, but nothing compares to the taste of warm pasteis de nata vegan fresh out of the oven that you’ve just made yourself. 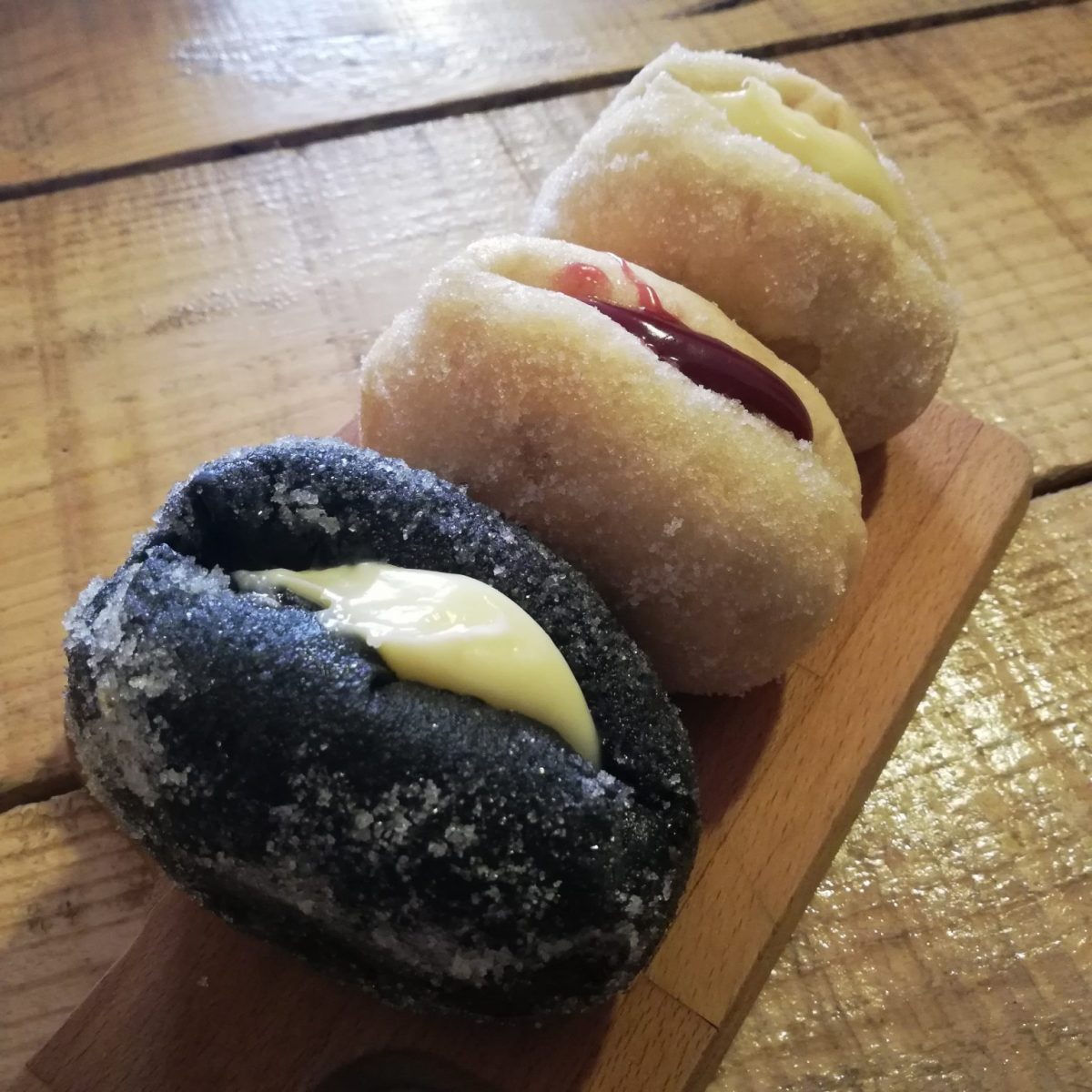 This unique tour includes not just vegan food but also some beautiful street art, as well as lovely views of Lisbon from some of its miradouros (viewpoints). The tour starts at the Anjos metro station and continues through the neighborhoods of Anjos, Penha de França and Graça.

Despite being near the city center, these neighborhoods are not very frequented by tourists. This tour offers a great opportunity to get off the beaten track and explore parts of the city that most visitors never see.

Tatie Jorge, the tour creator and guide, has lived in this area for several years and has hand-picked all of the stops herself. 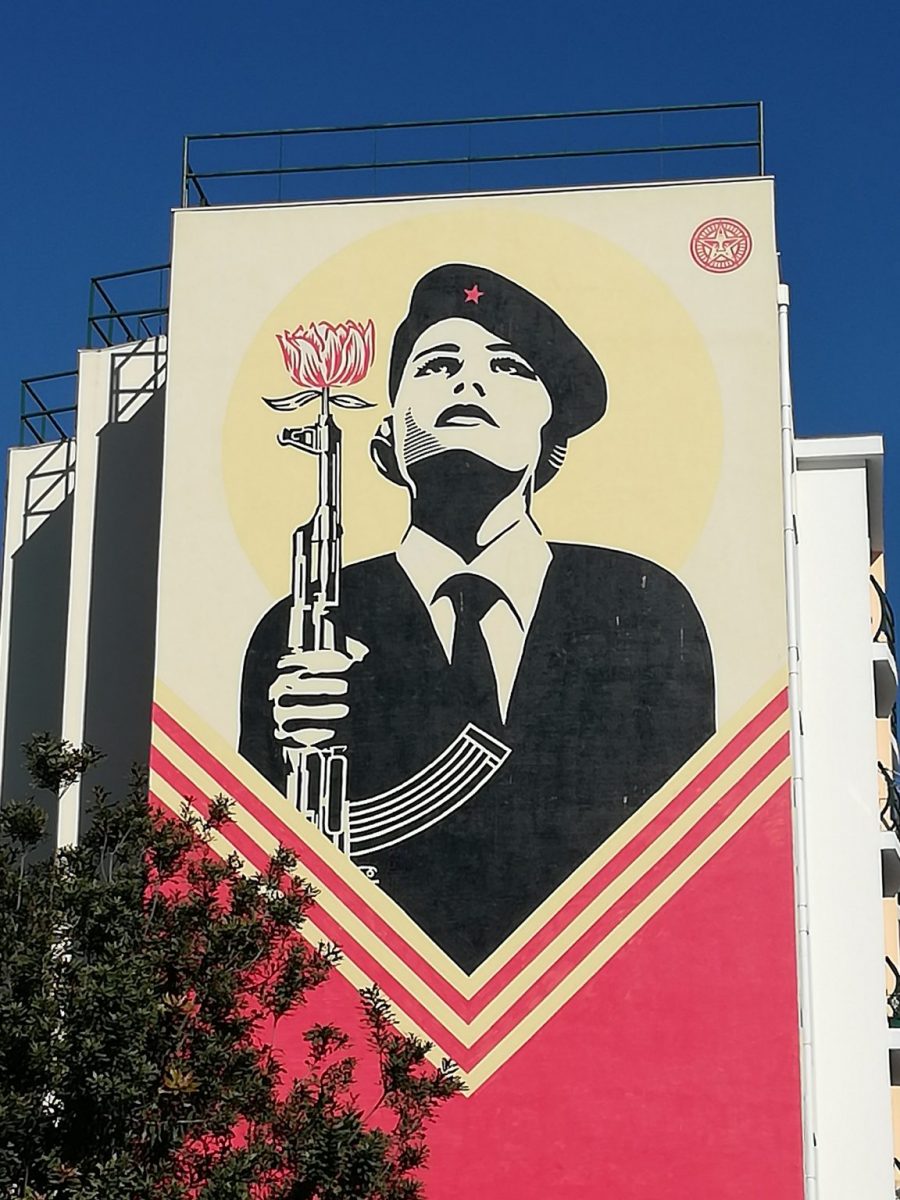 Street art celebrating the Carnation Revolution of 1974 in Lisbon

I’ve lived in Lisbon for two years now, and even I had never been to some of these places! And several of the vegan and vegan-friendly eateries that Tatie pointed out along the way were also new to me.

Whether you’re a first-time visitor to Lisbon or a seasoned local, you’re bound to make new discoveries on this tour. After the tour, Tatie sends each participant a PDF with photos and descriptions of all the places visited. Such a nice touch, and really helpful!

Looking for things to do in Porto as well? Don't miss these
top museums in Porto. And for more street art, you'll love this inspiring story about Taiwan's Rainbow Village and this one about the largest open-air street art gallery in Europe. It's just outside of Lisbon!

3. Vegan Portuguese Cooking Class or Brunch on a Farm 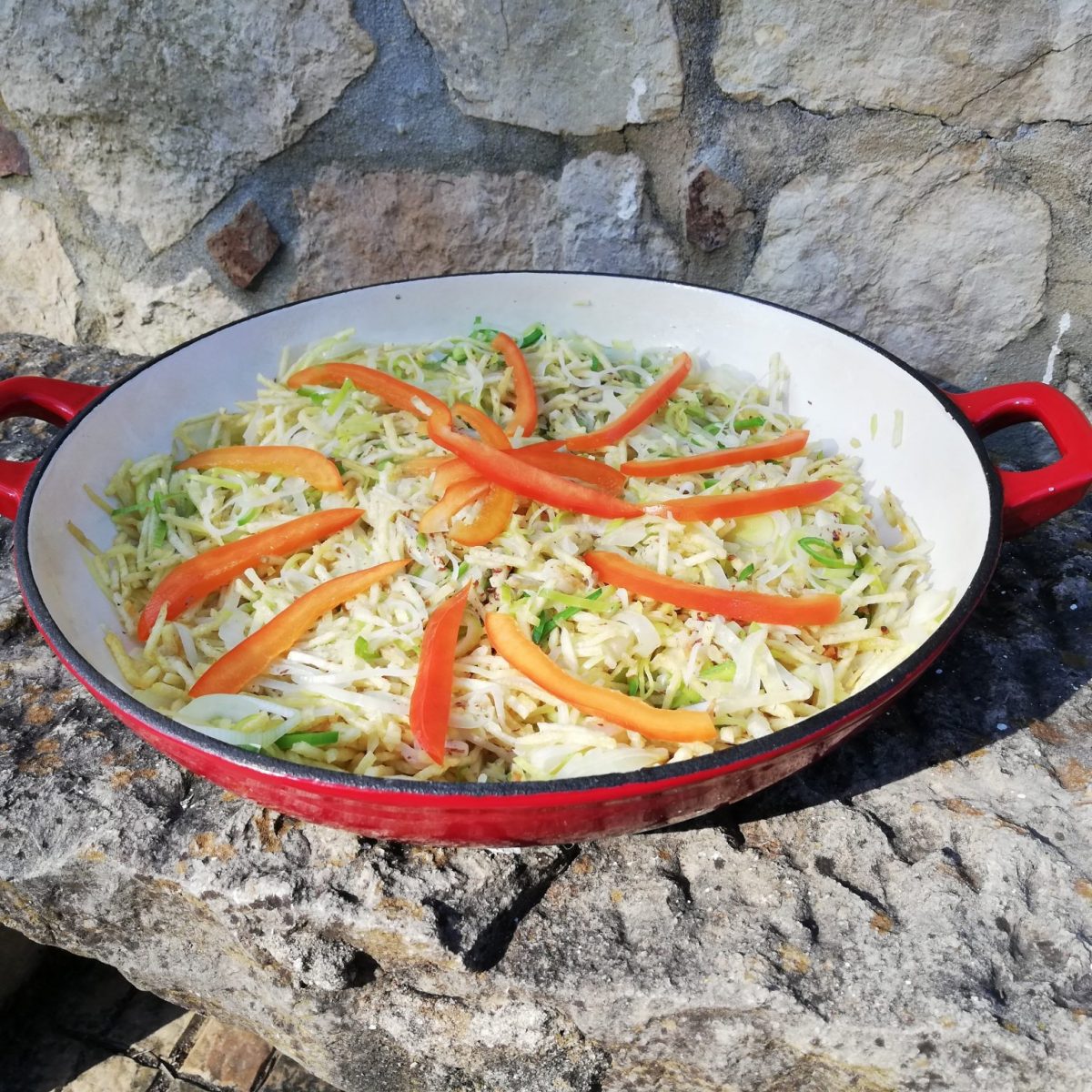 While there are dozens of vegan and vegetarian restaurants in Lisbon, most of them don’t serve vegan Portuguese food. If you want to experience traditional Portuguese food in a vegan version, I highly recommend having Sofia teach you how to cook it yourself.

Sofia is a Portuguese cook who runs an organic farm in the Sintra mountains, a beautiful forested area just outside of Lisbon. She is vegetarian herself and will gladly adapt her recipes to make them vegan.

I loved Sofia’s creativeness in the kitchen, such as her “deconstructed” spinach and chickpea soup. And her vegan version of bacalhau à Brás is to die for!

Most of all, I enjoyed spending time with Sofia, who is very friendly and kindhearted. Even without the food, this experience is worth it just for the chance to breathe the fresh mountain air, tour a small-scale working organic farm, and chat with a local who has great insights into Portuguese cuisine and culture. 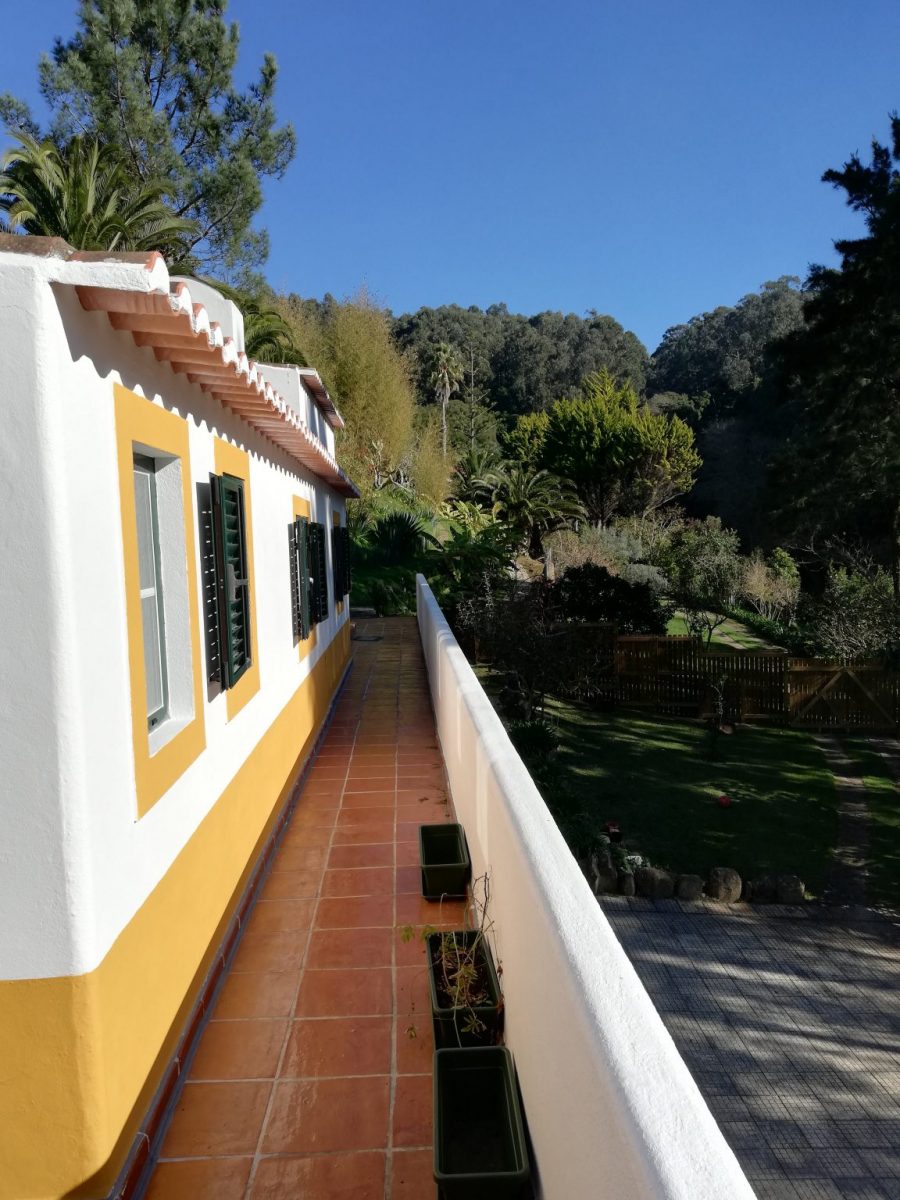 And if you’re more interested in eating than cooking, Sofia also offers the option of visiting the farm to enjoy a lunch that she will prepare for you herself.

Pickup and drop off from the Cascais train station is included, so you don’t need to have your own transport to enjoy this off-the-beaten-track Lisbon experience.

Lisbon isn't the only vegan-friendly city in Portugal! Even smaller cities like Faro and Braga have plenty of vegan options these days. 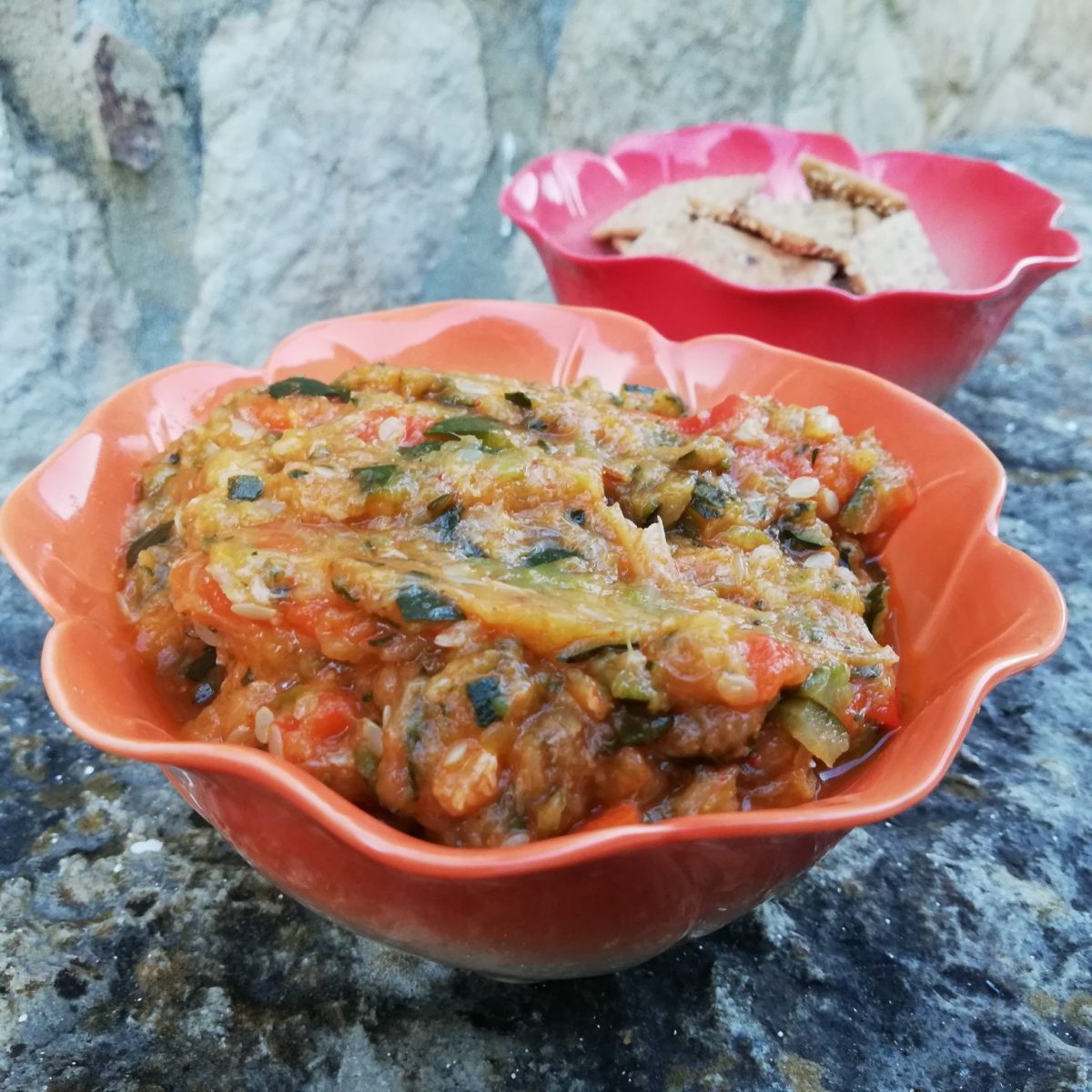 I mentioned that Sofia is Portuguese, but she was actually born in Tunisia and lived there as a young child. As a result, she also has an intimate knowledge of North African cuisine and culture.

It was fascinating to hear about Sofia’s childhood in Tunisia. I had traveled there myself and was pretty familiar with Tunisian cuisine, but she introduced me to dishes that I’d never heard of before. And they were delicious!

I've got lots more tips for Portugal! Be sure to check out my other articles about the country. 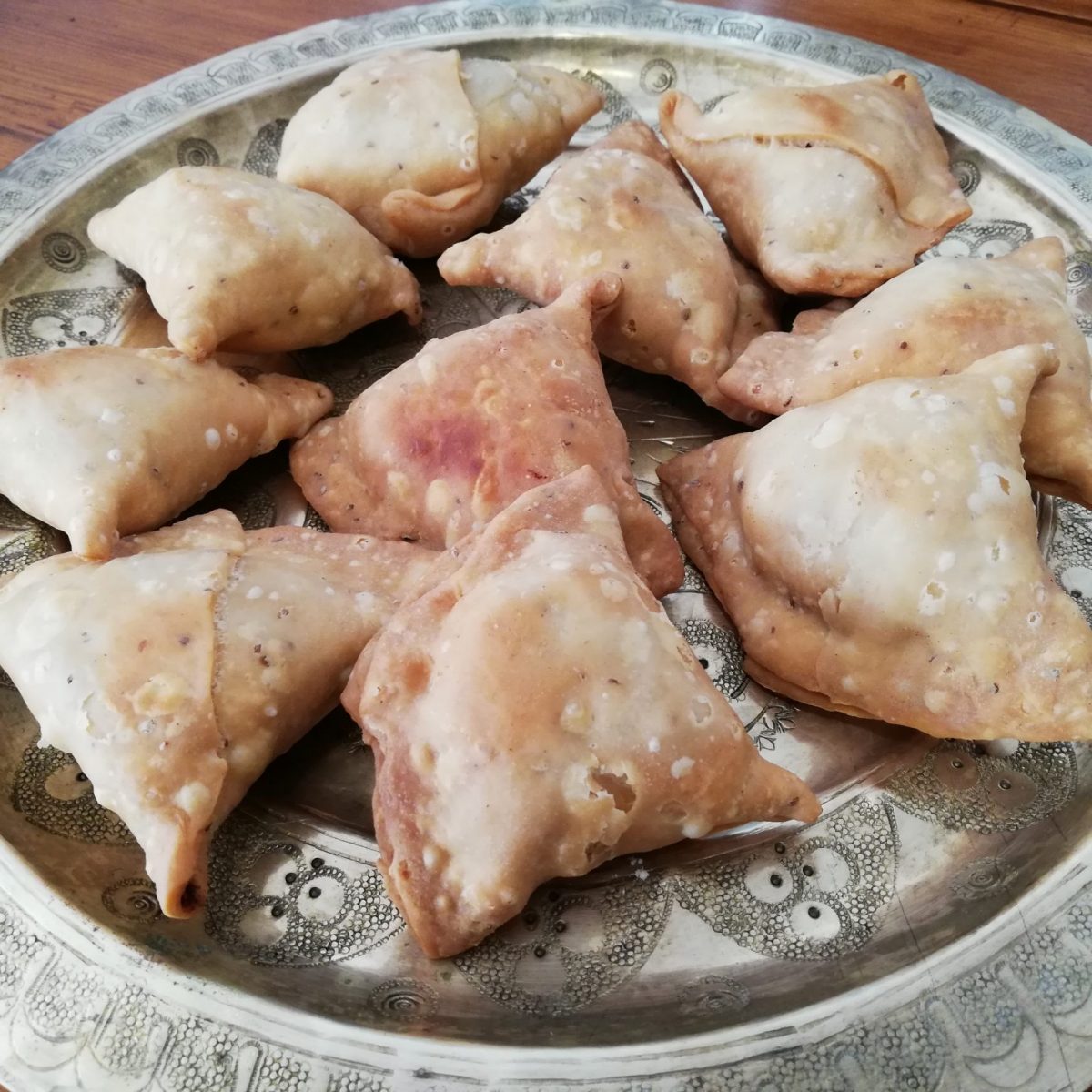 No one makes samosas better than Chandra!

Here’s one more multicultural experience that you can have up in the Sintra mountains. Who would have thought that a tiny mountain village would be so culturally diverse?

In fact, quite a few foreigners have chosen to make their home in the lovely whitewashed villages scattered around the region. Chandra, who comes from Nepal, is one of them.

Since arriving in Portugal, she has made quite a name for herself with her mouthwatering samosas. I had heard high praise of these samosas beforehand, and they definitely lived up to the hype!

Chandra and Sofia, mentioned above, are great friends. This experience also takes place on Sofia’s farm but is hosted by Chandra. She will prepare for you a delicious Nepalese lunch of momos, soup, lentils and other delicacies. Including her famous samosas, of course!

Click here to book the vegan Nepalese lunch with Chandra. 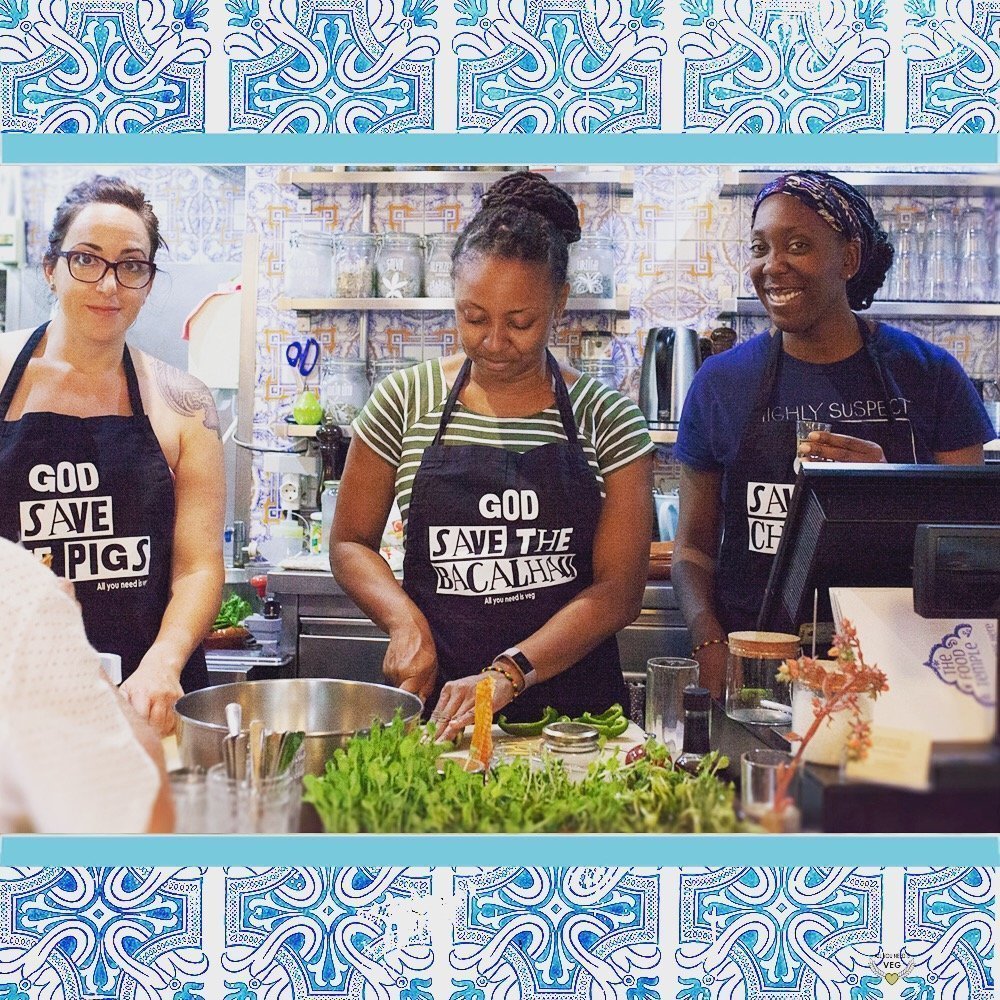 Yuki Jung is a plant-based retreat chef, cooking instructor and menu developer who relocated to Lisbon several years ago. She runs the All You Need is Veg Food Lab, where she hosts thematic cooking classes and sustainable events.

Yuki taught a workshop for our tour group during the first vegan Lisbon tour that I led, in 2018. We made a three-course meal of veganized traditional Portuguese dishes, and everyone loved it!

This month’s event will feature a green Thai bowl for lunch and a Carnaval swap, so people can put together a fun costume for Carnaval without spending an arm and a leg. What an awesome idea!

To schedule a cooking class or other event, you can register directly through Yuki's website or write to her at her email address: [email protected]

Click here to reserve your spot and cook vegan Portuguese or international food with Yuki.

7. Fado Concert in an Underground Cistern 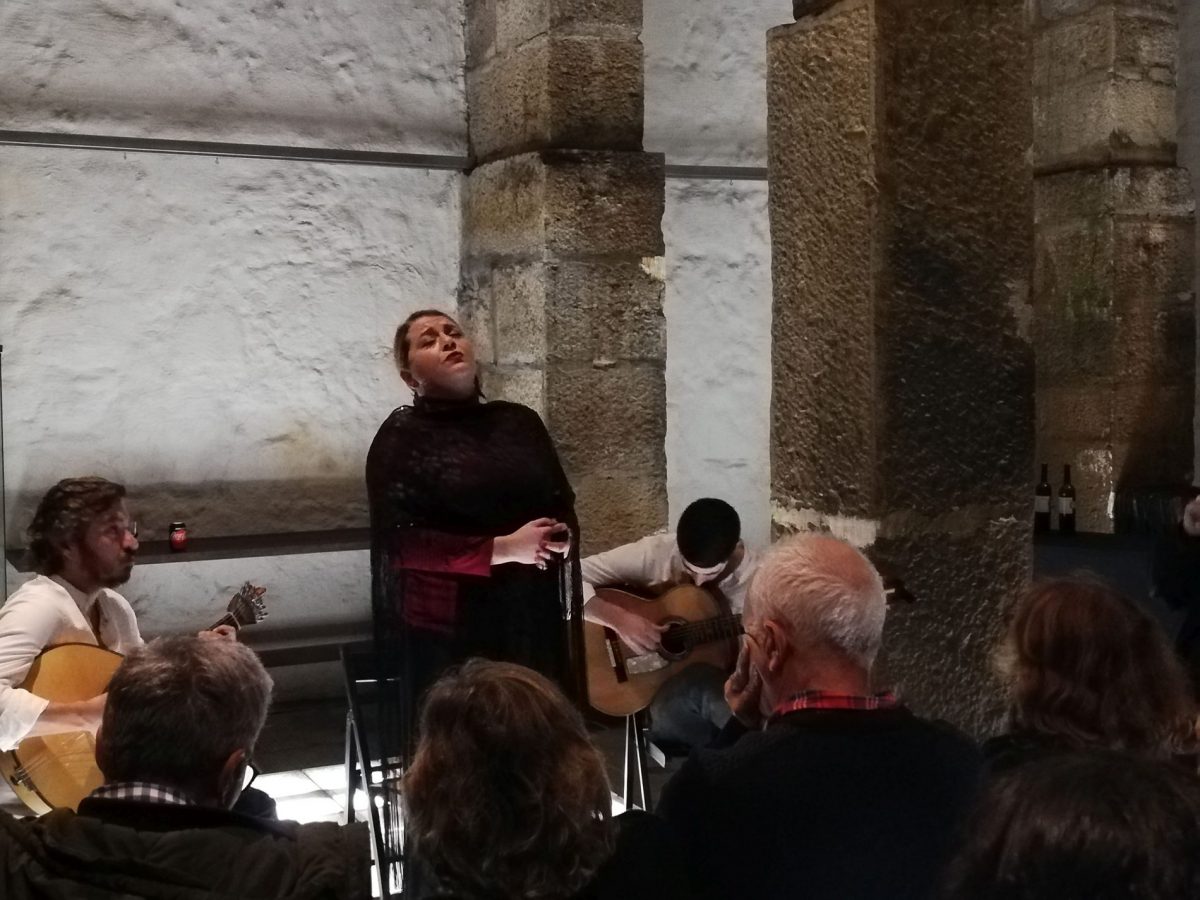 A fado concert is one of the most unique Portugal experiences, made even better when it's in a setting like this!

For most visitors to Lisbon, listening to live fado music is high on their bucket list. But where should you go to hear fado?

There are plenty of fado houses in Alfama and Bairro Alto that offer a fado show and dinner. But, while the singing is usually high quality in these places, the food is not. It's also very overpriced and full of animal products.

Sure, they might be able to whip up some spaghetti and tomato sauce if you ask, but why pay through the nose for bad food when all you want is to hear some good music?

Instead, you can enjoy an intimate fado performance in a beautifully atmospheric location, followed by dinner at one of Lisbon's many vegan and vegetarian restaurants.

Real Fado puts on concerts three nights a week in Lisbon, and each one is a unique experience you won't soon forget.

On Tuesdays, there's "Traditional Fado" at a bar filled with thousands of pieces of artwork, Friday is "Fado and Other Sounds" inside an underground cistern, and Sunday is "Timeless Fado" at a gin bar inside a neo-Arabesque 19th-century palace.

Tickets are 20 euros and include a glass of wine on Tuesdays and Fridays and a gin cocktail (obvs) at the gin bar on Sundays.

Check out the Real Fado Facebook page to see their upcoming events.

Have you participated in any other vegan-friendly Lisbon experiences? Tell us about it in the comments below! 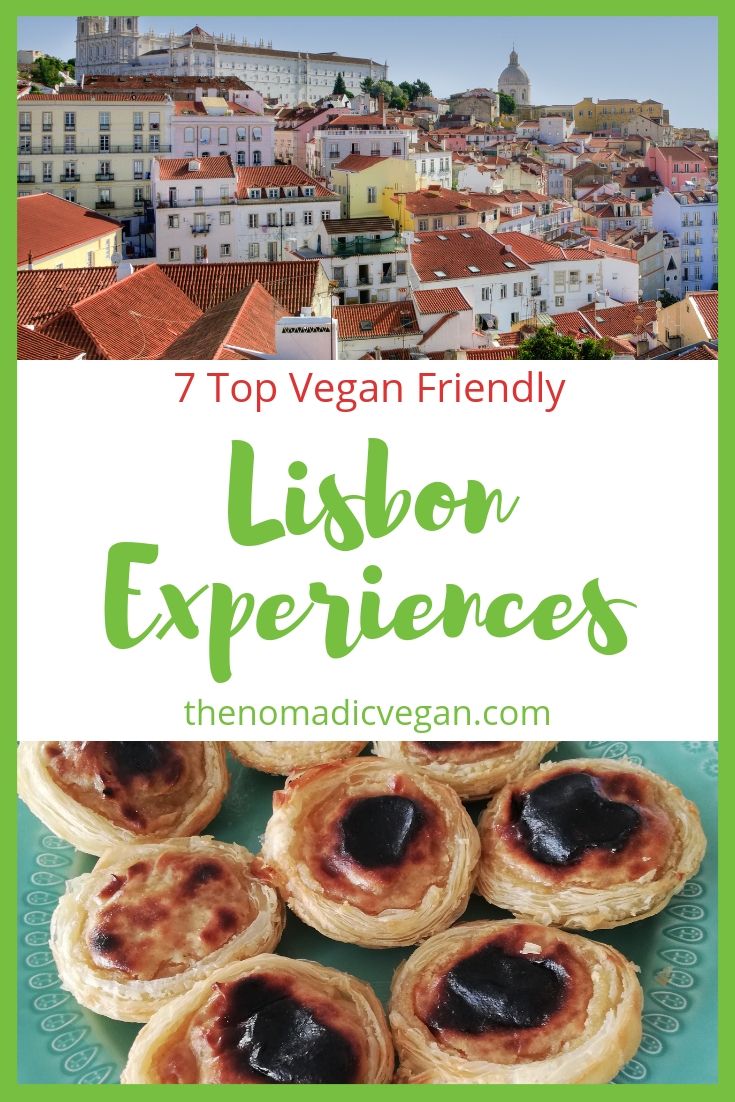 The organizers of some of the experiences listed here kindly hosted me at their event. As always, opinions are my own and I only recommend something if I genuinely like it and think you will too.