Home Travel Greece Living Like the Pasha in Ioannina 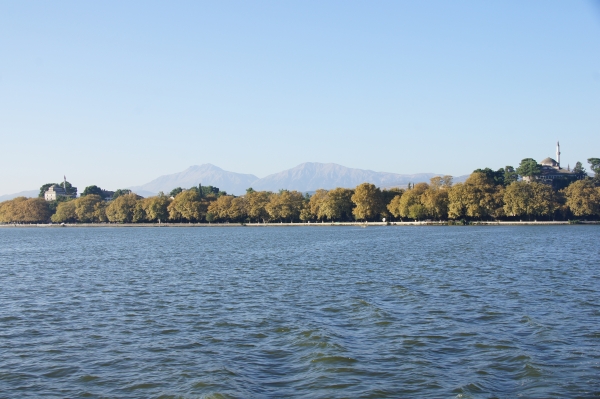 Ioannina is a lovely, unpretentious little town surrounded by old city walls that hide a maze of twisting, cobblestone streets. It feels like a completely different world than popular Greek tourist destinations like Mykonos or Santorini.

Meander along these for long enough and you’re sure to come across some old gems of Byzantine and Ottoman architecture. 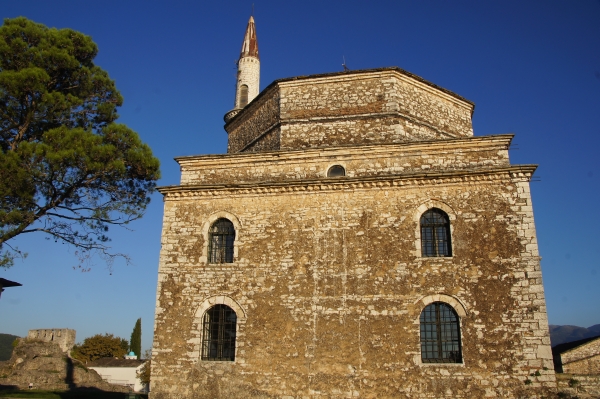 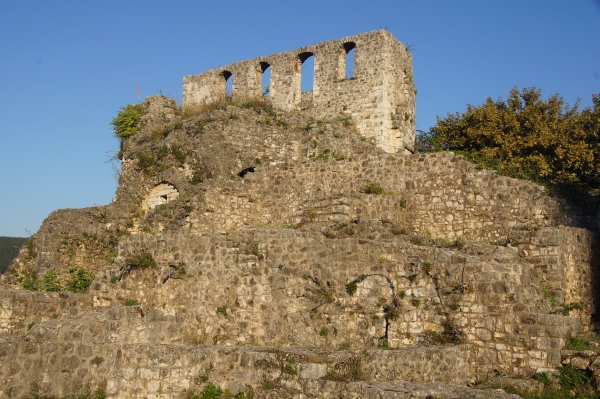 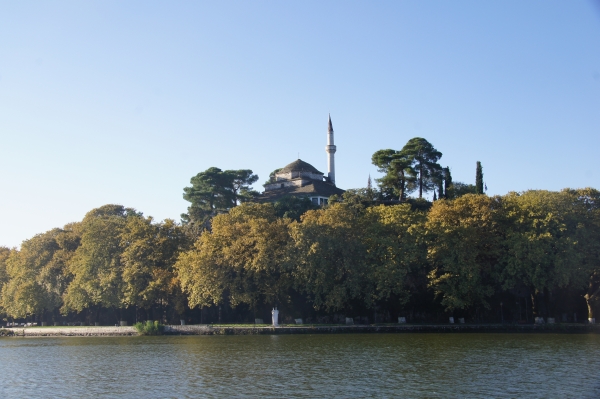 Ruins of a castle testify to the city’s importance in Ottoman times, when Ali Pasha held court here. And a short boat ride across Lake Pamvotis will take you to a small island that is home to no fewer than six monasteries. 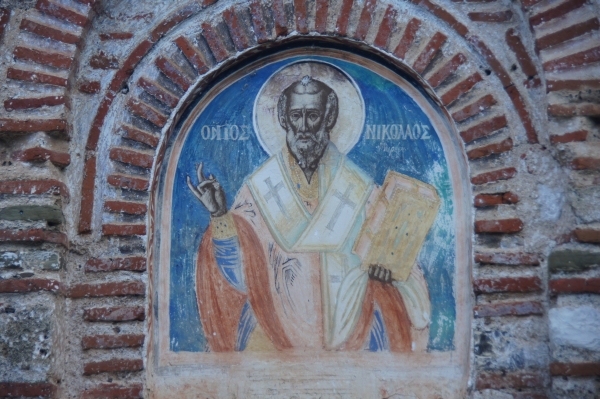 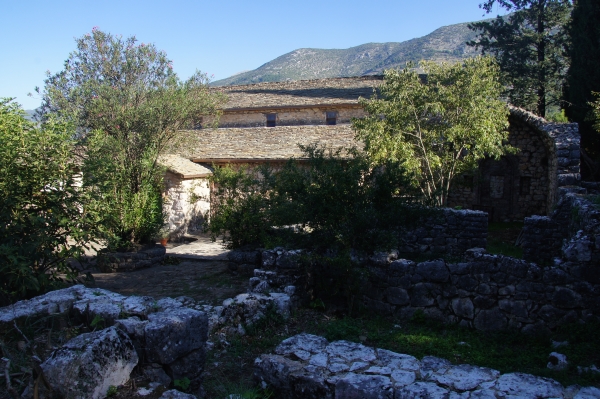 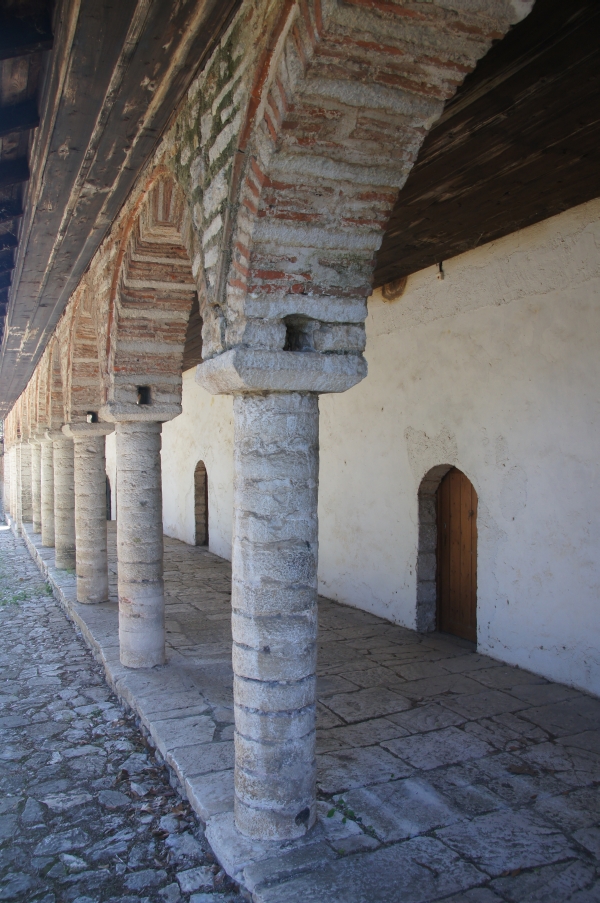 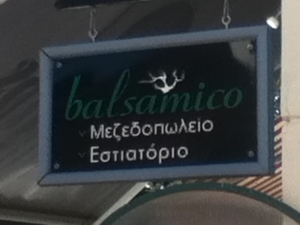 Throughout its history, this has always been a wealthy and aristocratic city. Apparently in Greek there is a saying that goes, “to live like the Pasha in Ioannina”, which means to enjoy the absolute best that life has to offer. Well, that’s certainly how we felt when, shortly after we arrived, we sat down to a beautiful dinner at a restaurant called Balsamico that sits just across from the main entrance gate into the old city (and thus has a lovely view of the city walls). Everything about our meal there was delicious and completely made up for any disappointment I might have felt about lunch earlier that day in Thessaloniki. Between the two of us we shared these four dishes: 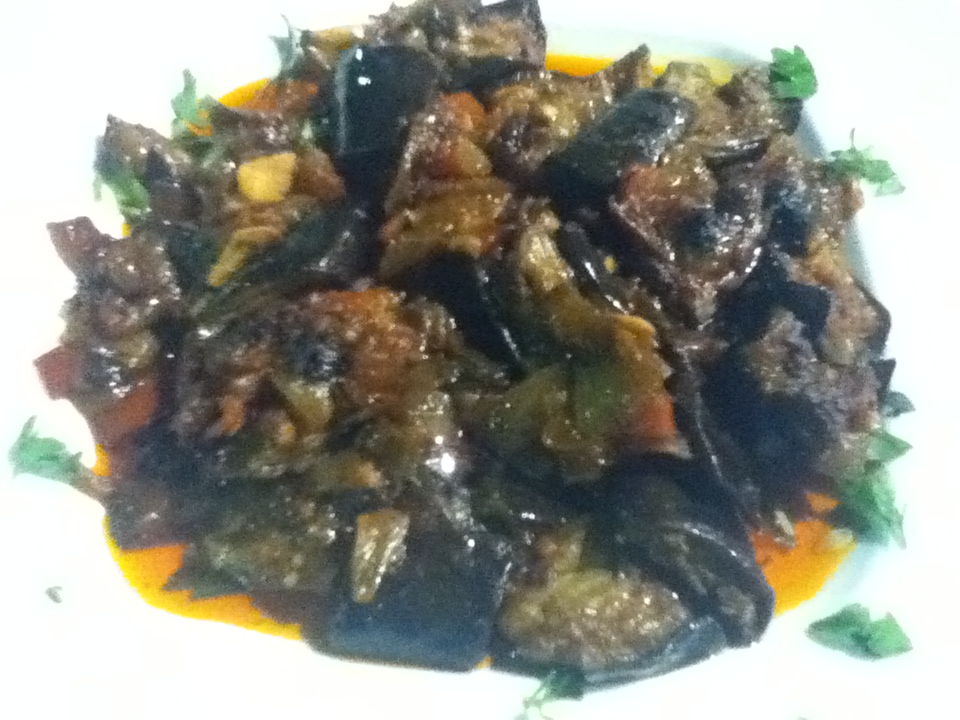 “Eggplant in the Oven” 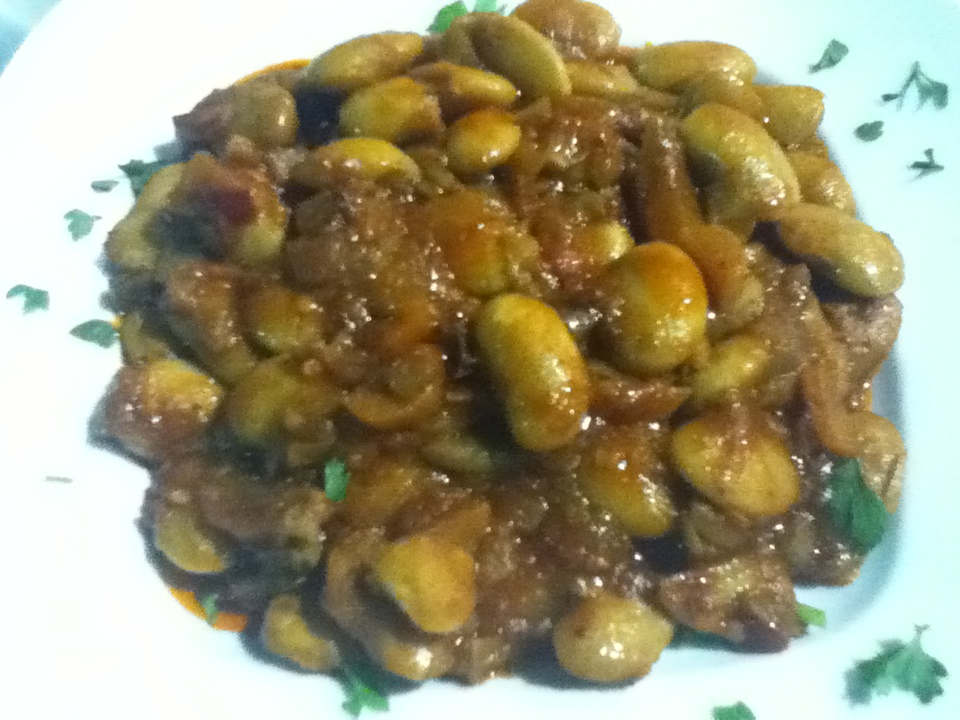 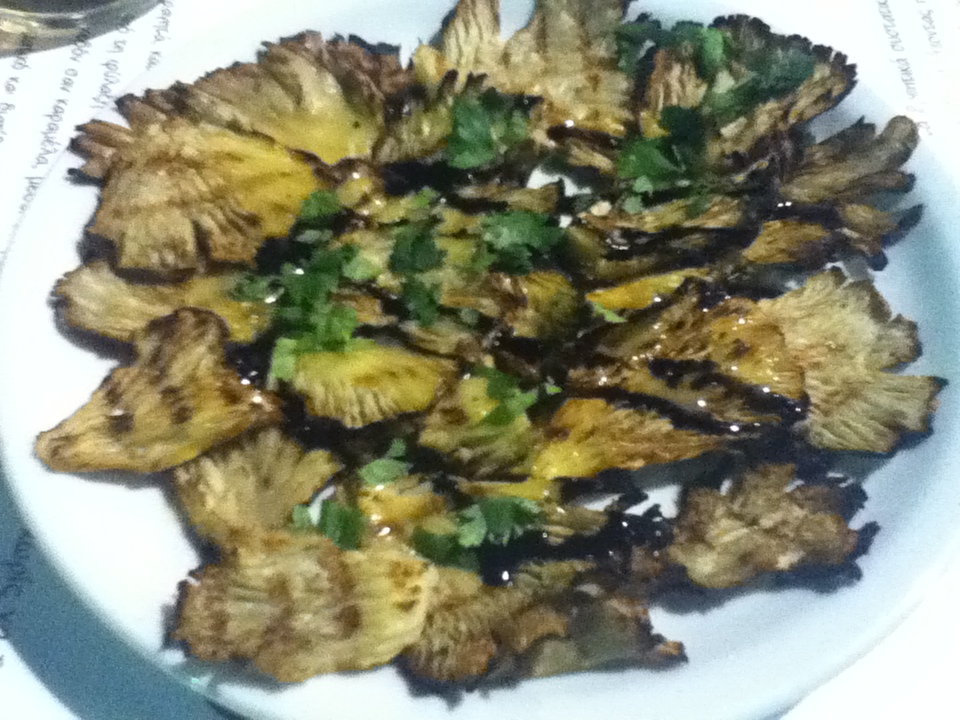 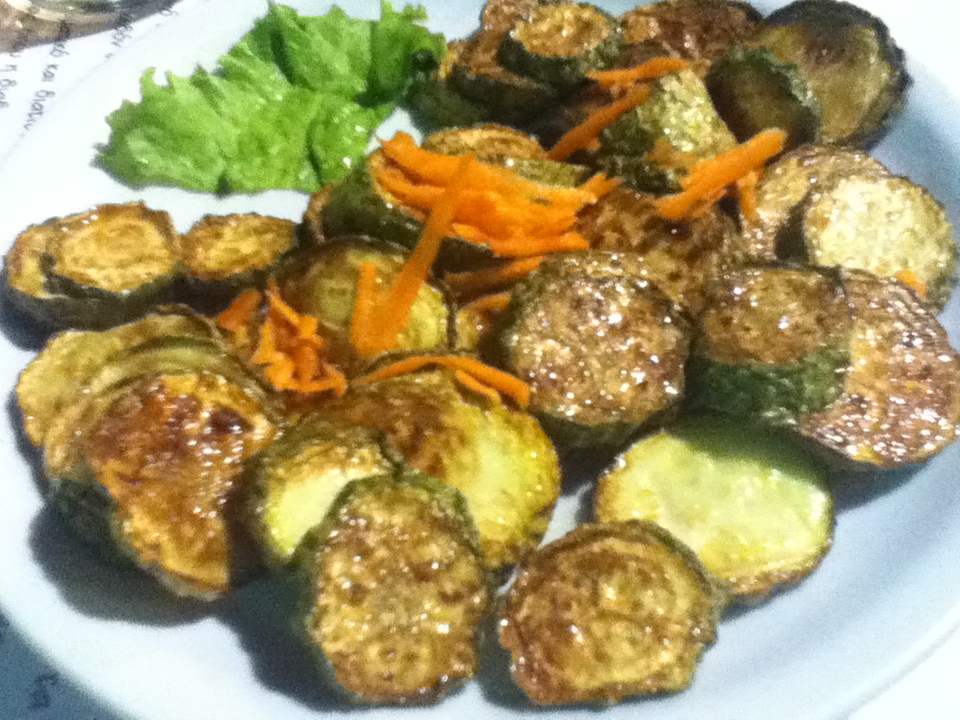 The first was described as “eggplant in the oven” and had the usual melt-in-your-mouth quality I had come to expect from eggplant dishes in Greece. Then there were gigantes (lima beans in tomato sauce) and a plate of absolutely exquisite grilled oyster mushrooms drizzled with balsamic vinegar. The last dish was a bit of a surprise, I must say. It was listed on the menu as “pumpkin fries”, so I was picturing some version of French fries made out of pumpkin, which sounded intriguing. I know you can make french fries out of sweet potatoes, and you can also make a sweet potato pie that tastes quite similar to a pumpkin pie, so in my head I made the logical leap to “pumpkin fries” without too much difficulty. As it turned out, though, this was merely a translation error; you can see from the photo that it was clearly fried zucchini. But once I adjusted my expectations I realized this dish was delicious too; the zucchini pieces were only lightly battered and so didn’t feel as heavy as some of the other fried vegetable dishes I’ve had in Greece. 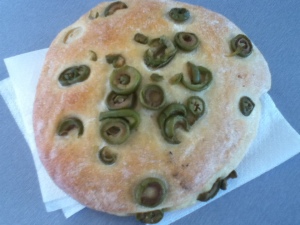 And if you need something quick to eat on the go, just across the street from Balsamico is a bakery where I later purchased this huge olive bread. It was very similar to Italian foccacia, but not oily like foccacia can sometimes be. 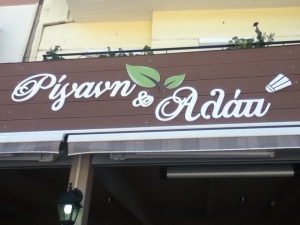 The next day we once again found ourselves at a bus station at lunchtime with little time to spare before we boarded our bus to our next destination. On the walk there we had seen a place called Rigani & Alati (“Oregano & Salt”) that looked like a restaurant, so after purchasing our bus tickets we headed back that way to check it out. It turned out to be little more than a glorified kebab stand with a few tables and chairs. I asked the girl behind the counter if she had anything nistisimo, not expecting to get much of a reply. She was extremely friendly and helpful, though, and offered to make me a gyro with ketchup, fries, tomato, lettuce and onion. 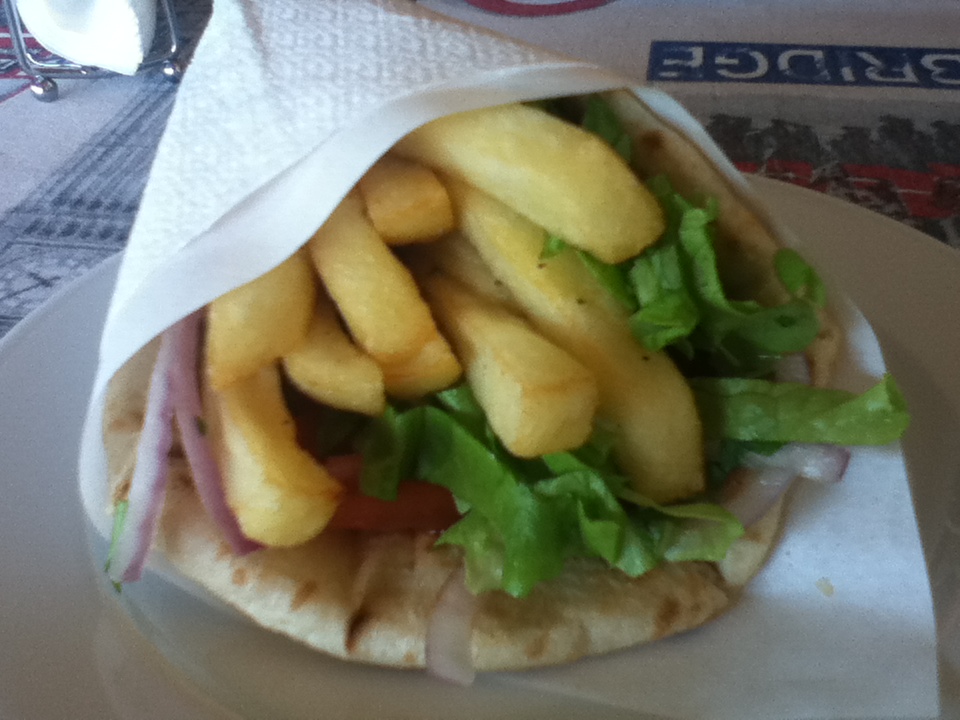 Not the healthiest of meals, but it actually tasted pretty great! This, in combination with a pasteli (sesame seed and honey bar) that I bought at the bus station, was enough to tide me over until dinner at our guesthouse in a village near the stunning Vikos Gorge. More about that in the next post!