Our first destination of the islands portion of our trip was the cobblestoned, medieval city of Rhodes on the island of the same name. This was a place we had wanted to go for some time, and it definitely lived up to our expectations. While much of the rest of the island seemed to be filled with gaudy beach resort hotels, the old city was like stepping back in time a few hundred years, back to the days when the island was ruled by the Knights Hospitaller. 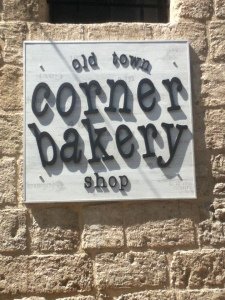 On our first morning in Rhodes, I tried out my magic word for the first time. We went into a pastry/cake shop, where Nick ordered a cheese pie for breakfast.

I spied some sesame bars and was thinking I would just have those, because surely none of the pastries would be vegan, but since the woman behind the counter seemed really friendly and helpful I decided to ask just in case. “Do you have anything that is fasting food? Nistisimo?” I said tentatively, still not too confident with my pronunciation of this new word.

But she knew exactly what I meant and began looking around pensively at all the products behind the counter. Suddenly, her eyes lit up as they landed on what her husband described as a special “diet” cake, made with just brown sugar, raisins, sesame seeds and a little oil. 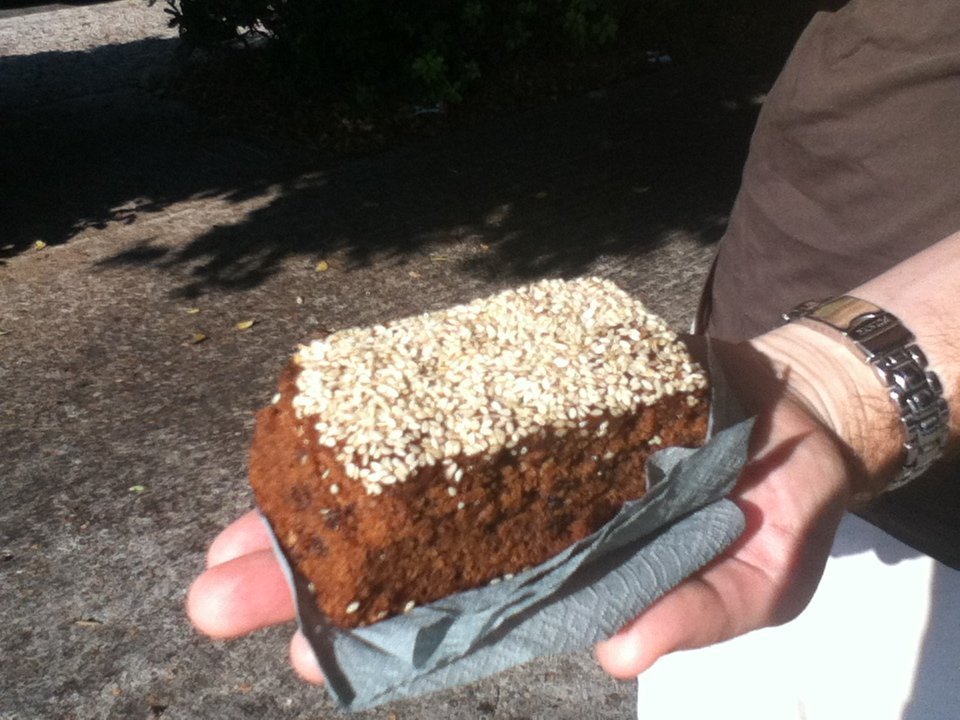 I eagerly bought a slice, and we enjoyed a lovely breakfast on a park bench at the port. In fact, it was so good that I later went back and bought another one for the next day’s breakfast, as I knew we would be taking an early bus to see the ruins at Lindos and I wasn’t sure what kind of options would be available then. I should mention that the shop, located on the corner of Ippodamou and Omirou streets and fittingly called the Old Town Corner Bakery Shop, also sold some other tempting delicacies like halva, loukoumi (better known as Turkish delight, but of course they don’t call it that in Greece!) and an assortment of sweet jams and preserves in flavours I had never seen or imagined before, like carrot, walnut and even olive. 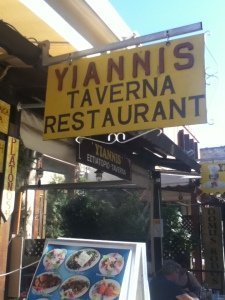 For lunch that day we went to a place called Yianni’s because it had been awarded a carrot symbol (which denotes a veggie-friendly restaurant) in the Lonely Planet guidebook. Frankly, I don’t see what the place did to deserve that honour. They did have a few veg*n options, but no more than the average Greek taverna. In fact, I first tried to order the gemista (stuffed tomatoes and/or bell peppers), which is almost always cooked as a vegan dish, but at Yianni’s they had meat in them. In the end I settled on the dolmades (stuffed vine leaves), pictured here. 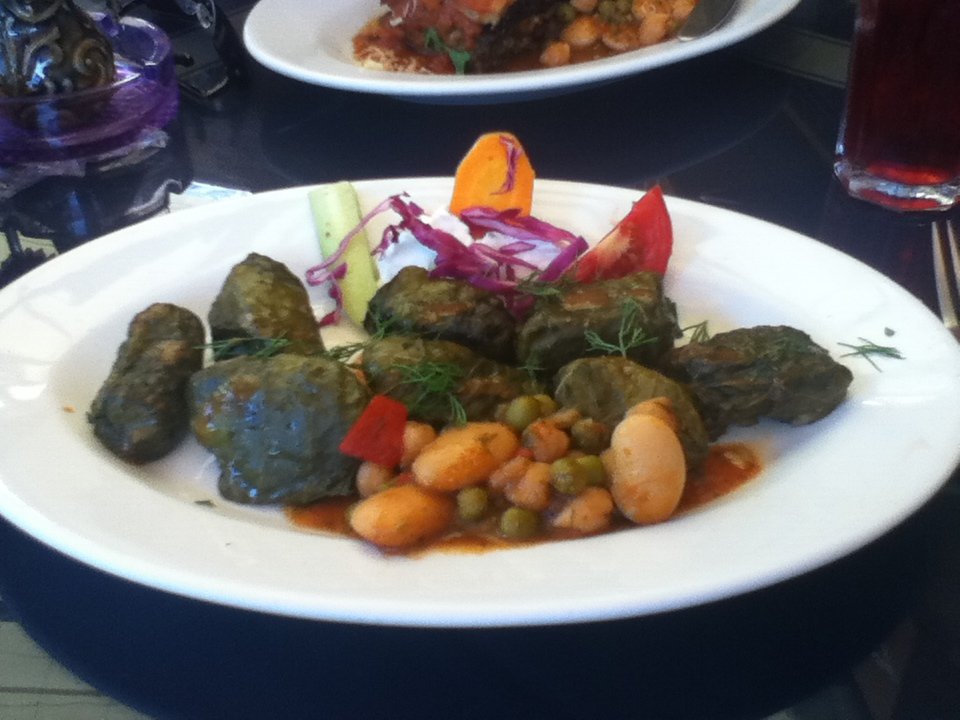 I thought I had confirmed that they had no meat, butter, cream, etc. (“only dolmades” the waitress assured me), but I still ended up with a dollop of tzatziki on the side of the plate. Why I didn’t break out the magic word this time I don’t know. Still getting used to it I guess. But actually, this happened a few times in Greece, even when I did use the magic word. The wait staff would confirm that a dish was nistisimo, which it was, but then it would be served with a decidedly not nistisimo blob of yogurt or tzatziki. Dolmadhes is one dish that was frequently served this way, so you might want to specify when ordering them. Since Nick was quite happy to eat the tzatziki for me, I didn’t worry too much about it in this case. Of course I wish it had never been served to me in the first place, and yes, a bit of it had touched the dolmadhes that I ate, but these things are bound to happen at some point when you’re travelling, so I find that it’s best to keep a flexible attitude. Perfection is impossible and has never been my aim. Veganism, for me, is not about personal purity; it’s about intention, not perfection. It’s about living with compassion towards all beings, and sometimes that means showing compassion towards myself when I don’t get things exactly right.

Dessert came on the walk back to the hotel, in the form of these little green figs bought from a woman selling them on her doorstep in one of the narrow streets of the old town. They were by far the best figs I have ever eaten. So juicy and delicious! 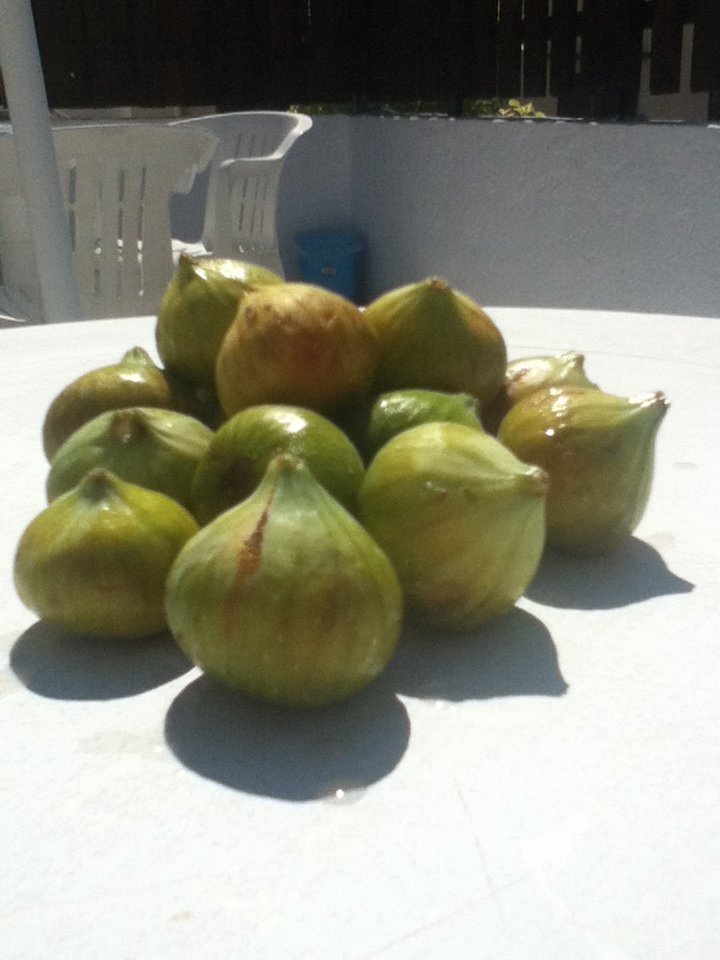 For dinner that night we ended up at a
restaurant called Nireas. This one didn’t get a carrot in the LP, and indeed it advertises itself as a seafood restaurant, which it is. Nevertheless, it still had more vegan options than Yianni’s. I eventually settled on the grilled vegetable platter. 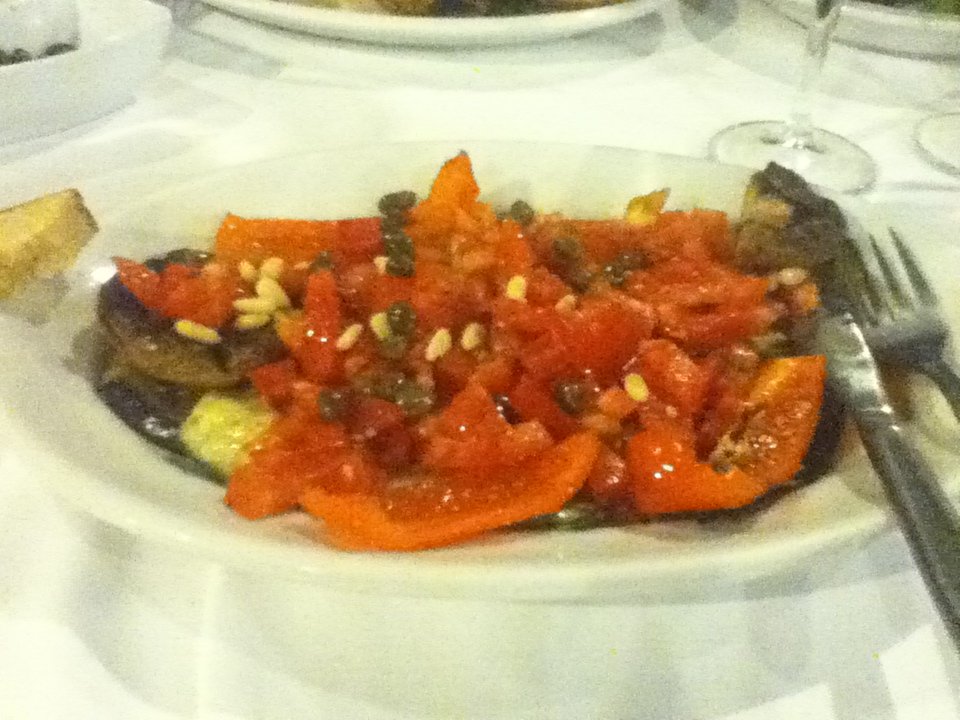 This normally comes with feta cheese sprinkled on top, but the waitress said it was no problem to order it without. It was also meant to be served as a starter, to be shared by two people, but I found that it worked wonderfully as a main dish, and I noticed that the woman at the next table chose it as her main too. Oh, and to accompany the bread and olive oil we ate while we waited for our food, we also had this serving of capers, which included not just the caper berries but also the little rounded, fleshy leaves. I’d never seen caper greens before and had no idea you could eat them!

Oh, and Nireas has a beautiful sun-dappled courtyard where you can sit under the shade of the vine leaves: 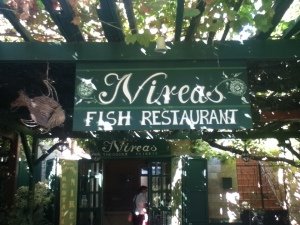