Where to Find the Best Vegan Food in New Orleans 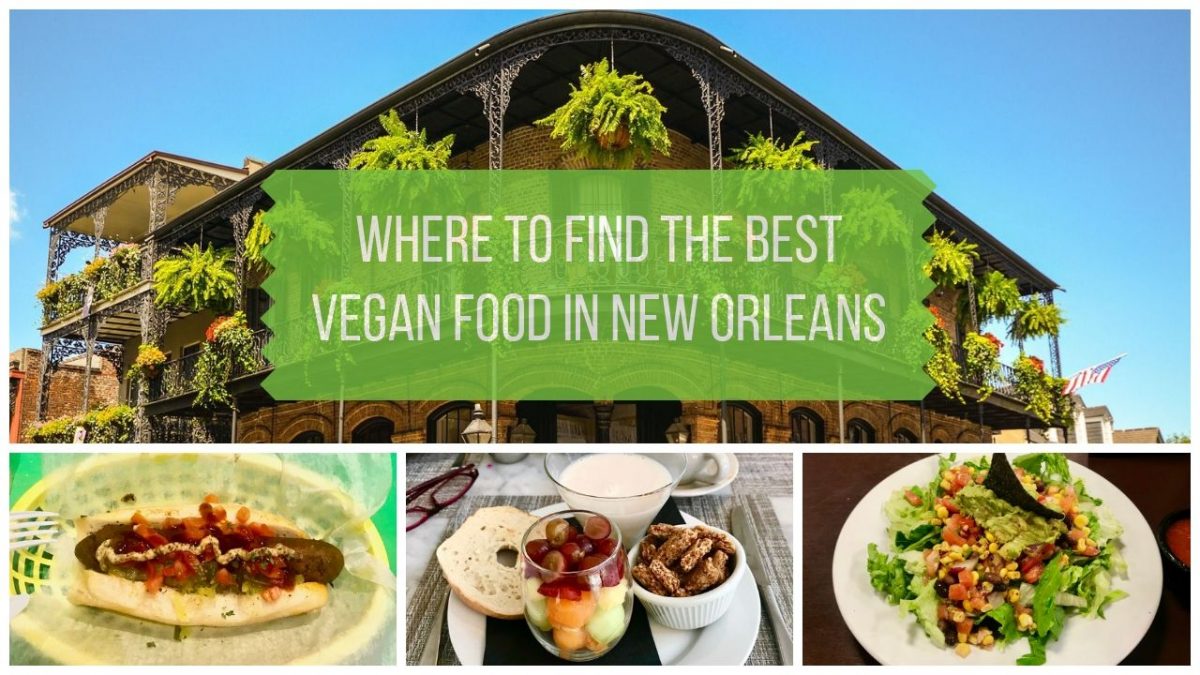 This year, my parents planned to give my sister and me a musical education by taking us on a U.S. road trip to cities renowned for their musical history. We began in New Orleans, Louisiana, a beautiful city known for its thriving musical nightlife, rich culture and history.

I was sceptical about whether or not I would be eating much here, as New Orleans isn’t exactly known for its vegan food, but we managed to find some amazing little spots. Restaurant staff were also happy to change some dishes for me to make them vegan.

Where to Stay as a Vegan in New Orleans 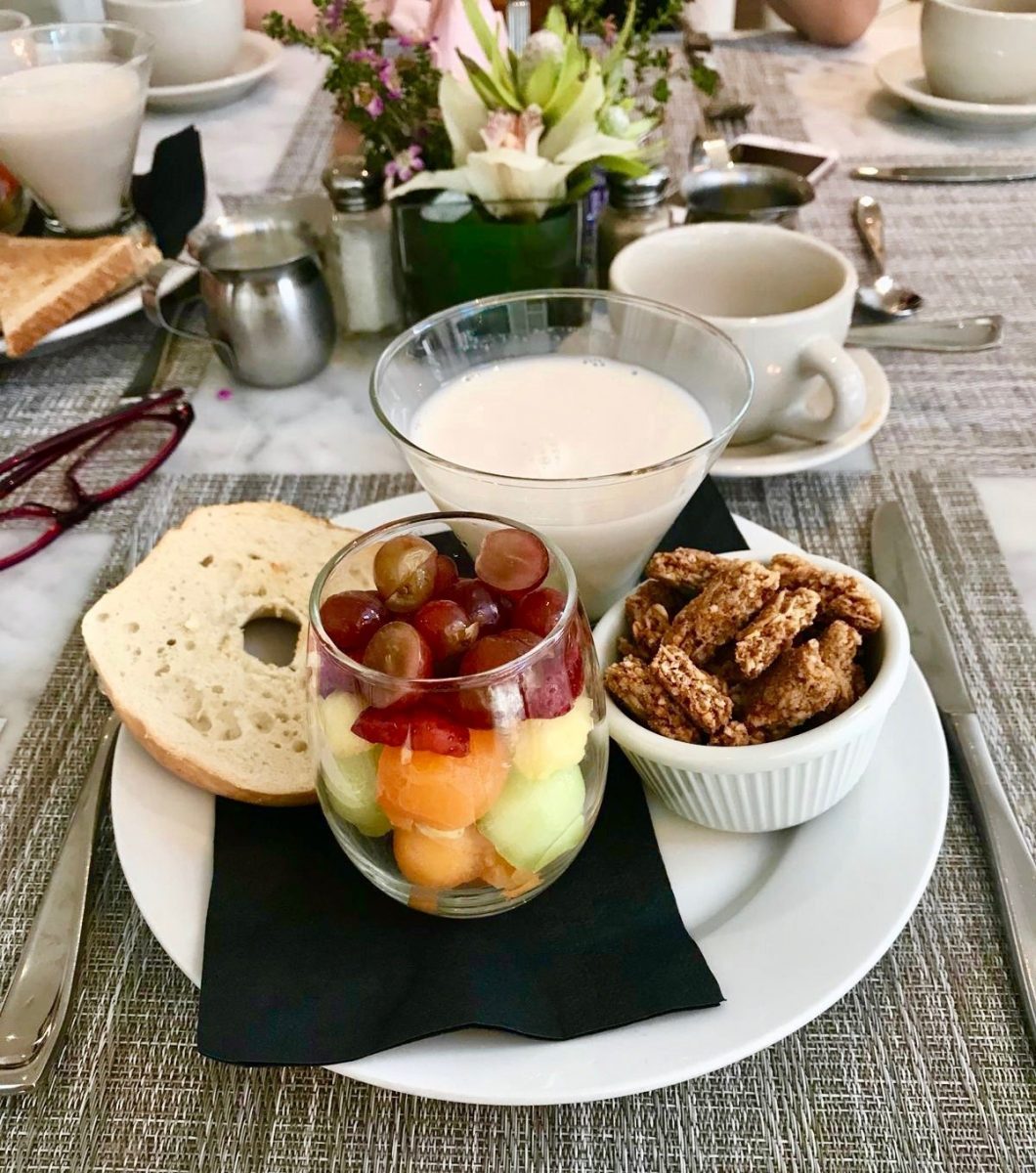 Vegan breakfast at The Saint Hotel

We stayed at The Saint Hotel on Canal Street and decided to have breakfast there every day. When I first asked our waitress whether they had any vegan options, she politely and simply replied no, and also assured me I would most likely not find any vegan places around New Orleans. Not a very promising start.

The chef, however, was happy to amend some menu items to make them vegan, so I managed to get some avocado toast and some veggies, which I was more than happy with. And, since the hotel offered almond milk, they gave me granola with almond milk instead of a yogurt parfait. I thought I would be eating just fruit for breakfast every day on this holiday, so I was thrilled!

Located inside the Catahoula Hotel is Midnight Noodle, one of the highest-rated vegan restaurants in New Orleans. The restaurant started out as a vegan popup and finally found a permanent home at the Catahoula in June 2018. This new collaboration makes the Catahoula a great choice for vegans looking for a place to stay in the city. 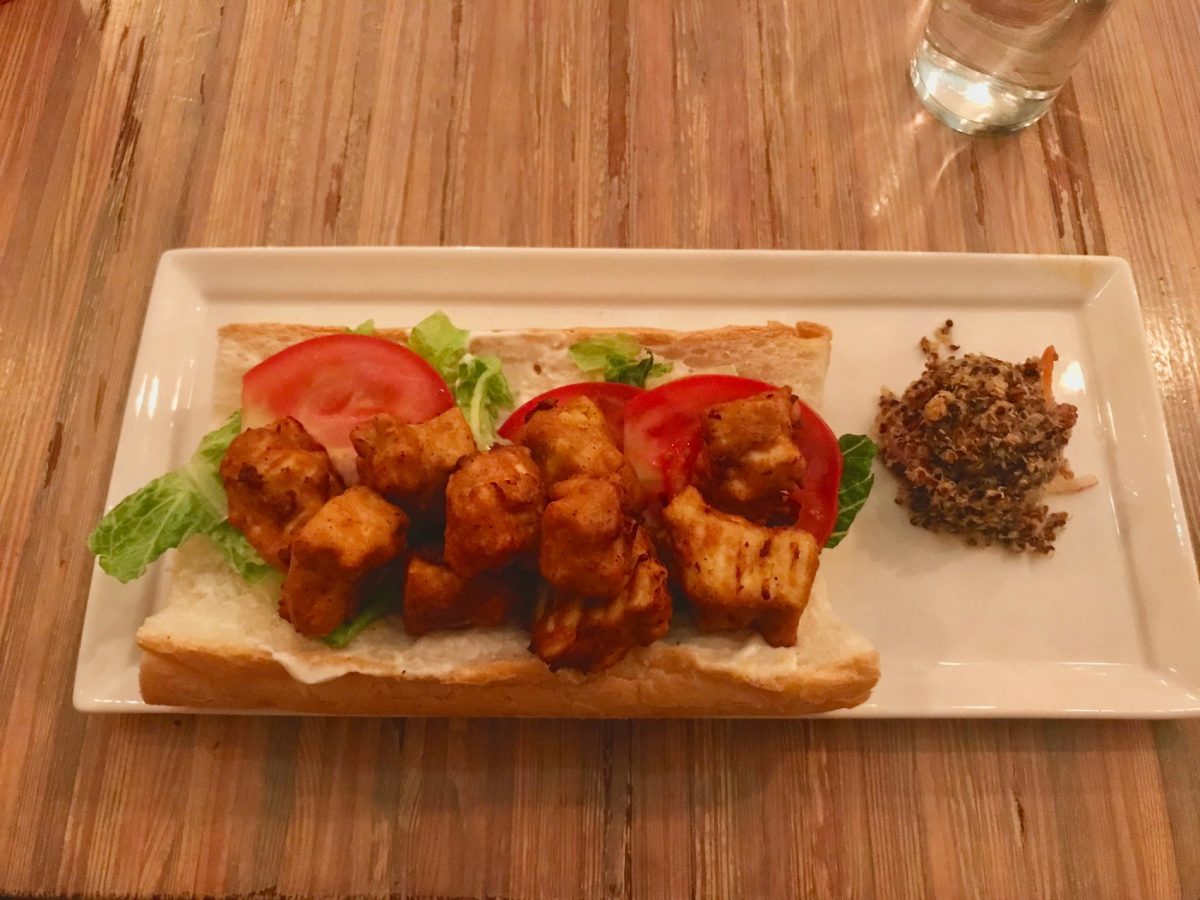 When we disembarked starving after our ill-fated riverboat cruise (more on that later), I was placed in charge of searching online for a place to eat. Everything I read about Seed made it sound like a fantastic New Orleans vegan restaurant, so I booked an Uber there straight away.

Po’boys are a famous food in Louisiana, as I discovered. I had never heard of them, but every restaurant seemed to serve them! Seed offered a vegan po’boy, so naturally I had to try it out. It was so tasty – exactly what I needed!

A po’boy is a type of sandwich, and at Seed they made it with tofu. They also have veganized versions of other local specialties like gumbo. My dad got that and said it was the best thing he had eaten so far on our holiday.

Seed definitely serves some of the best vegan food New Orleans has to offer. 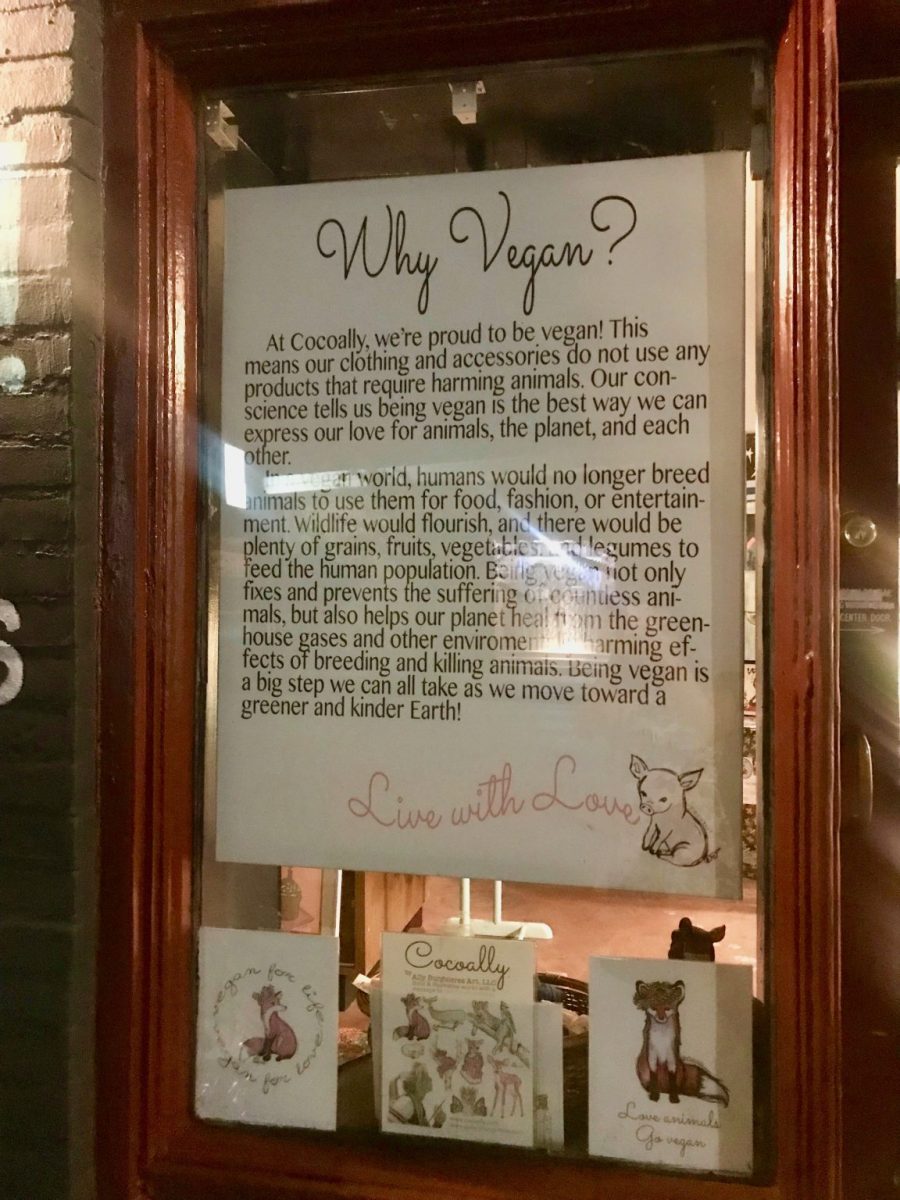 Next door to this restaurant was a vegan boutique called Cocoally. The owner, Ally Burguieres, sells t-shirts, tote bags and other accessories that feature her drawings of adorable little animals.

It’s a great place to pick up some vegan message wear or some unique souvenirs from New Orleans. They also have two other locations in the city.

Since I was travelling with non-vegan family members, I didn’t have the chance to try any of the other fully vegan New Orleans restaurants. However, I did come across a number of vegan-friendly places that served delicious New Orleans vegan food. 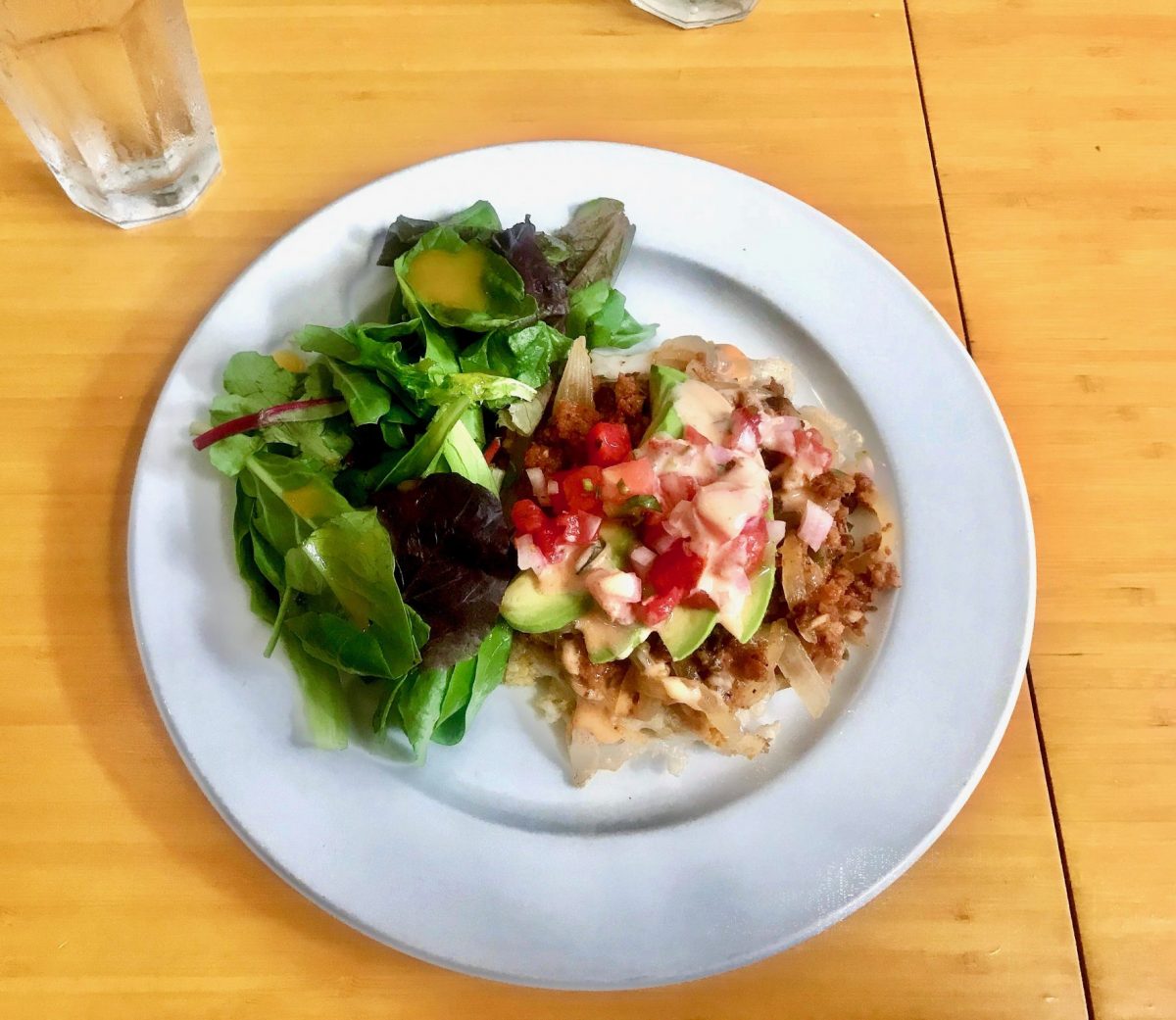 For lunch on our first day in New Orleans, we walked in the oppressive heat to a little café we found called Carmo. This place offered loads of vegan options, and it was honestly one of the most delicious meals I had eaten in a while.

The café was so welcoming, the staff even put the World Cup football on for us (we’re British), and we stayed the whole afternoon there. I tried their vegan Rico, which is a grilled plantain topped with vegan cheese and vegan meat, avocado, salsa fresca and “Rico” sauce.

It doesn’t look that appealing, but it tasted so incredible. I recommend it to any vegan New Orleans visitors. 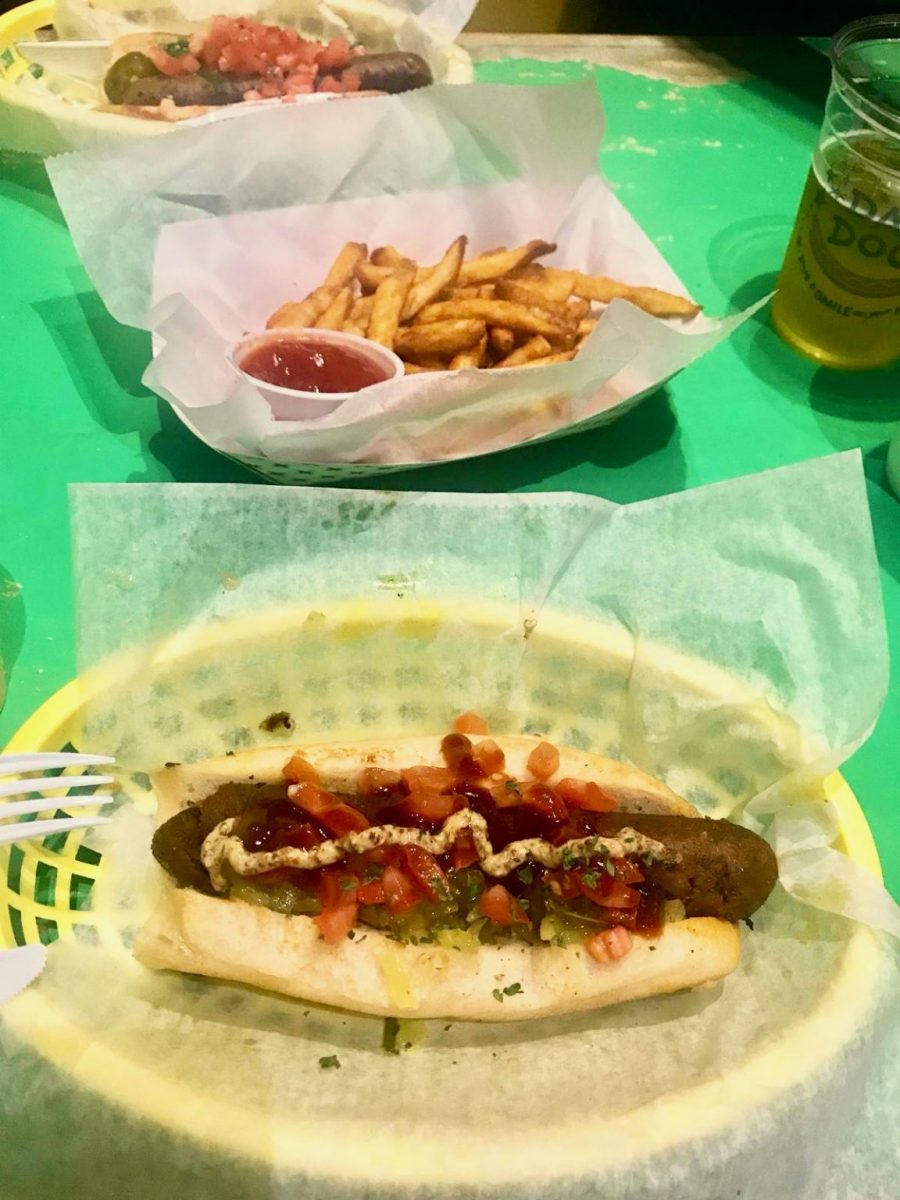 Of course, we had to spend our evening in Bourbon Street on a Jazz Club crawl, but first we needed sustenance to get us through the night. Since my favourite junk food is hot dogs, I was in my vegan heaven when I found a place called Dat Dog offering 3 different vegan hot dogs and loads of different toppings to go with them.

The place was a bit shabby looking, but it had a ton of character. We each got a different hotdog, and they were all so flavoursome! 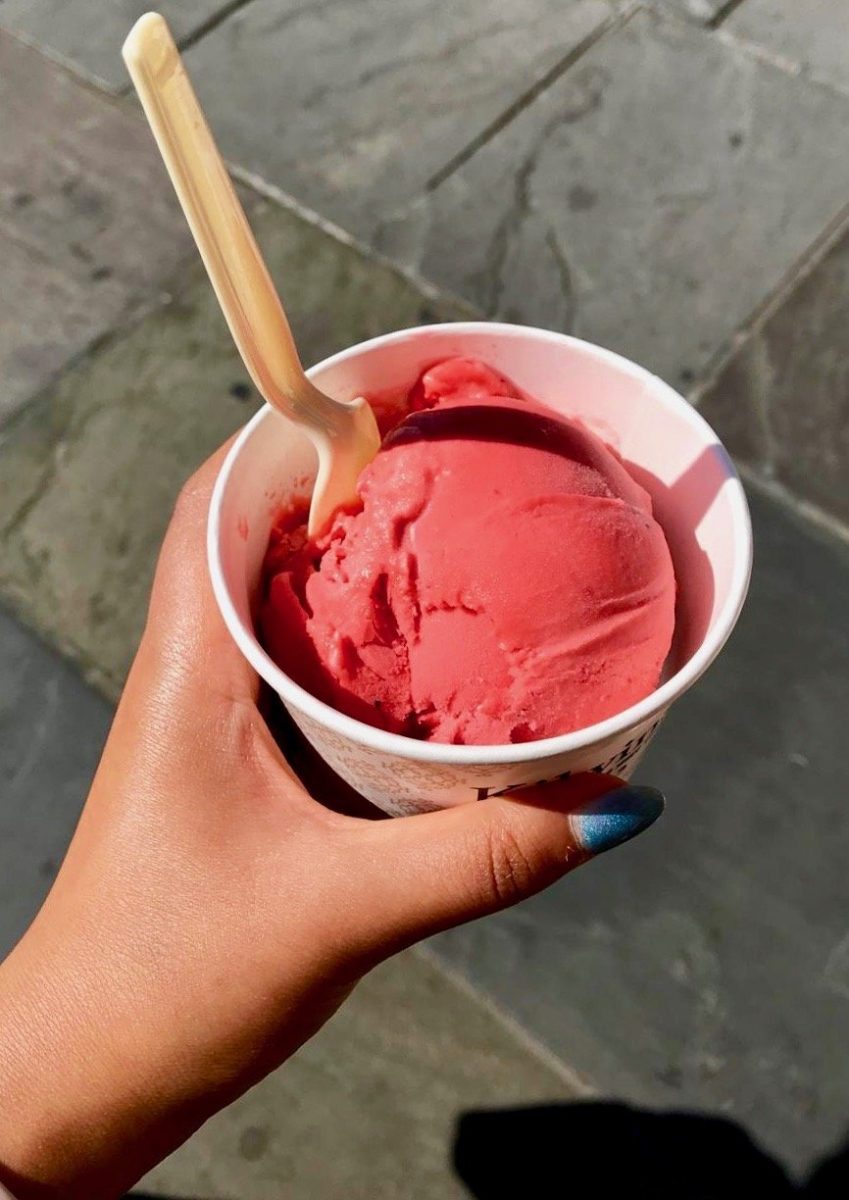 The next day after breakfast, we walked through the beautiful French Quarter. The heat was so strong that before we knew it we found ourselves in a candy and ice-cream store called Kilwins.

I didn’t expect to find anything for vegans here, but I had a look anyway and was very pleased to discover that the sorbets were all vegan. Of course, I couldn’t resist getting one. 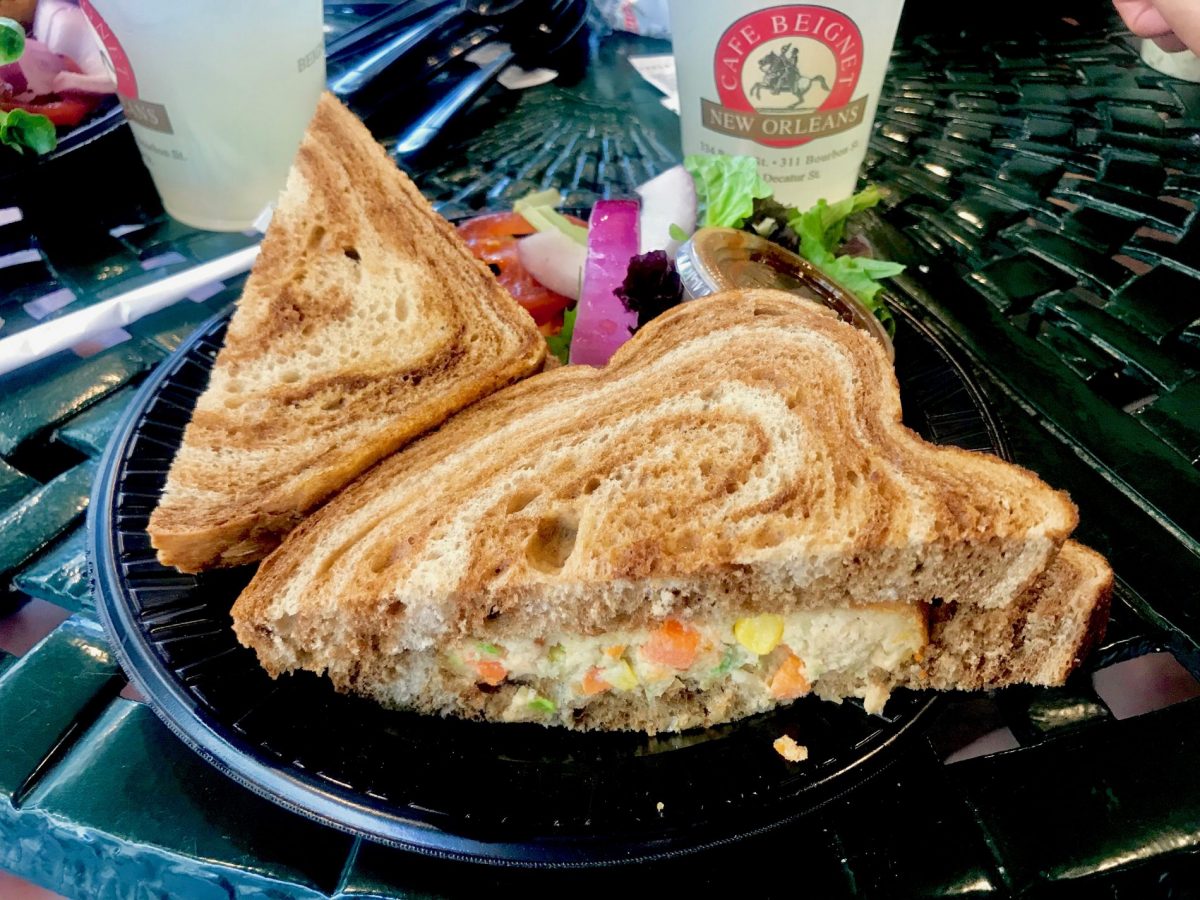 The sorbet from Kilwins kept me cool walking through the streets until we found a great live band playing at a café called Café Beignet. They had a veggie patty sandwich on offer and were happy to go through the ingredients to find out whether it was vegan. It was! It was also delicious. 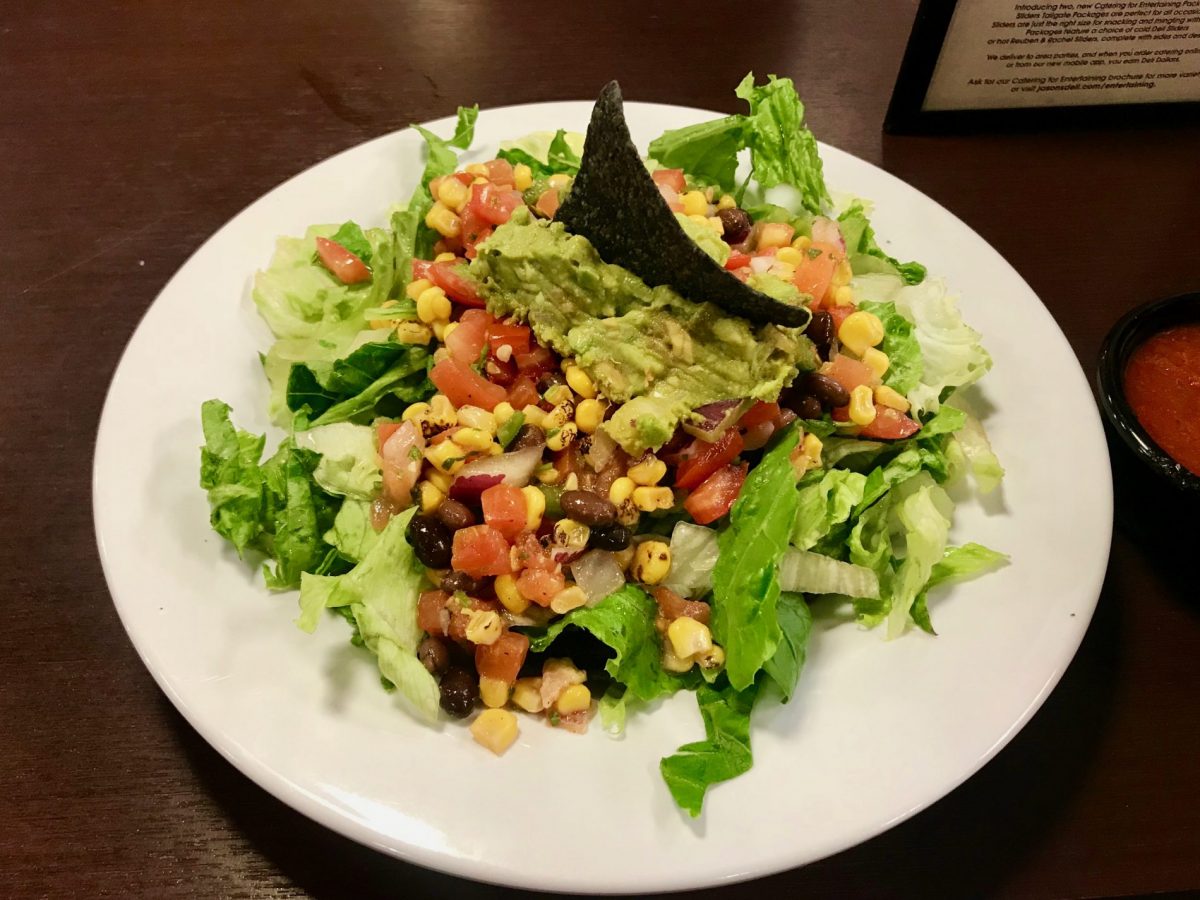 On our last day in New Orleans, we stopped at Jason’s Deli after working up an appetite with some last-minute shopping. I chose the blue corn tortilla salad, which made for a scrumptious final meal in New Orleans.

New Orleans had more vegan places than I had expected, and we managed to find some great vegan-friendly spots too, so I wasn’t left hungry.

There were several more specifically vegan New Orleans restaurants that I definitely plan to check out on my next visit!

Attractions to Avoid as a Vegan in New Orleans 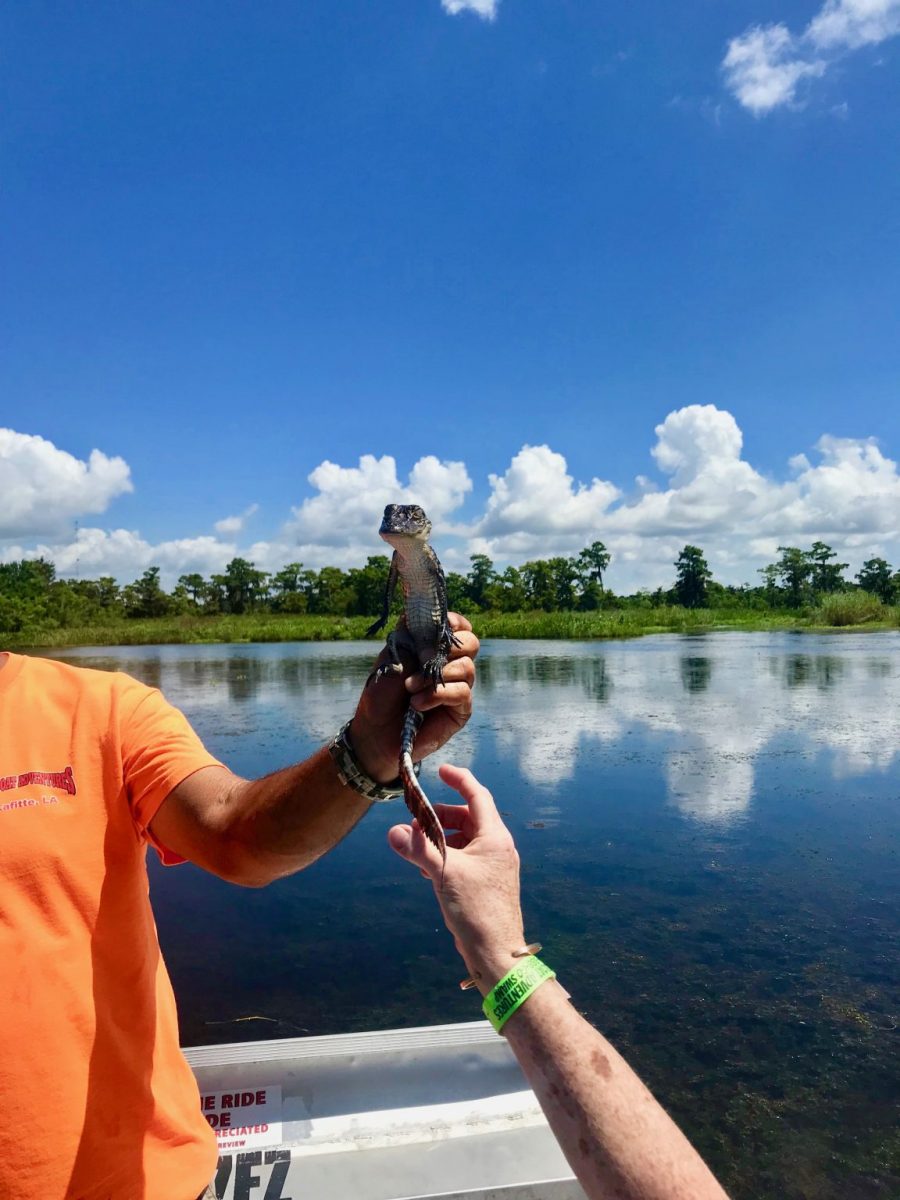 We spent our first morning in New Orleans on an alligator tour of a local swamp. I was sceptical about the treatment of the alligators but couldn’t find much information about it. Since it wasn’t a zoo, I tentatively agreed to go along.

My fears were confirmed when our tour guide brought a baby alligator out of a dark box it had been inside for the whole hour-long tour and gave us a story about it belonging to his daughter and living in a huge tank at his home. After talking to a few tourists afterwards, I found out all the tour guides give the same story about the baby alligator.

I also found out on the tour that the company receives alligators in order to breed them and sell them for meat, so it’s definitely not in line with vegan values! Being told by everyone how great alligator meat was just made me want to take all the alligators home with me. 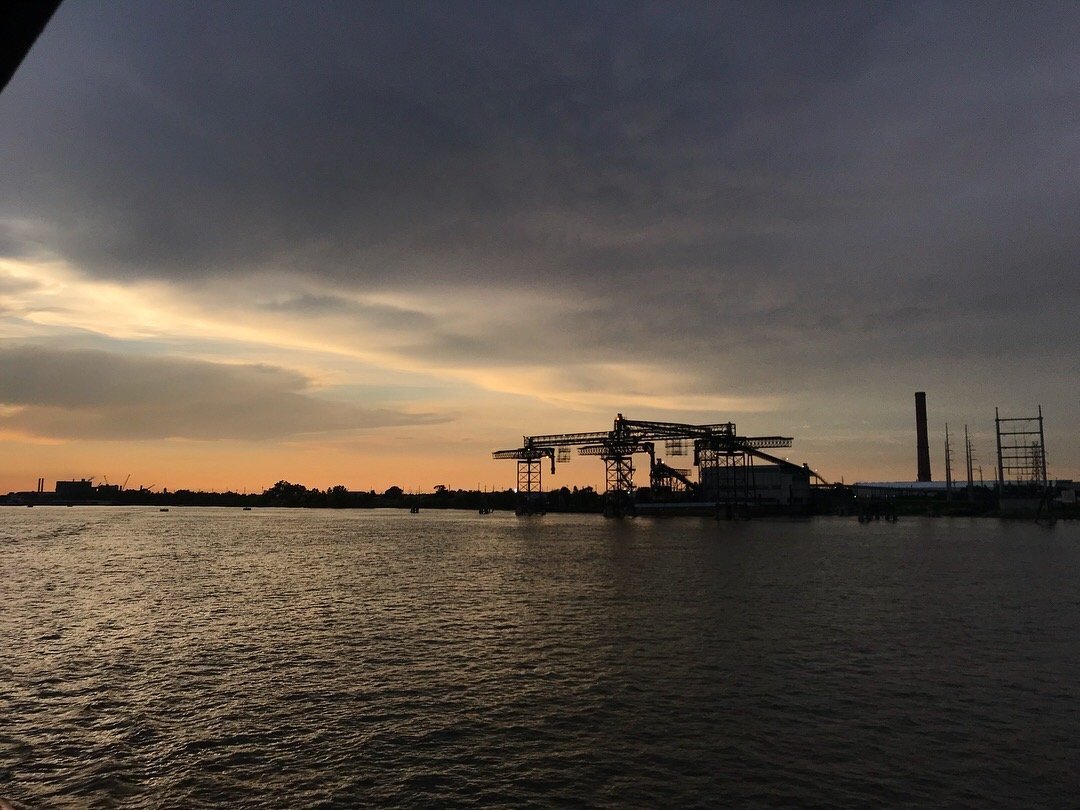 We had a jazz riverboat cruise booked for the evening, which we were all super excited for. Two months prior we had requested vegan options through our travel agent. Closer to our trip, we called them to ensure we’d have options.

The night before, we called the agent again, who said there were definitely going to be vegan options in the buffet. She even told us exactly what they would be: boiled potatoes, green beans, salad and pasta.

When we got on the boat and sat down for our meal, we were dismayed to be told that there were no vegan options. The boiled potatoes were covered in butter, the green beans had honey on them, and the pasta was made of egg!

The cruise was beautiful, but we were starving by the end of it. Given the complete lack of vegan options and the false information provided, I can’t recommend this cruise for vegans visiting New Orleans.

Looking for a vegan version of your favourite comfort food or of a traditional New Orleans specialty dish? Whatever you’re looking for, you can find it in New Orleans. As a vegan visitor to New Orleans, you won't be missing out on any of the local specialties.

I didn’t have a chance to eat at most of these places this time around, but I definitely plan to check them out on my next trip. Here’s where to find:

Cake Café and Bakery – Vegan options at this popular local café include a tofu scramble, a sandwich filled with sesame-crusted, flash-fried tofu, and a healthy version of grits with roasted vegetables (ask them to hold the goat’s cheese).

Breads on Oak – This European-style artisan bakery and café became fully vegan in the summer of 2018. They offer organic artisan bread, desserts and pastries. In addition to their delicious cookies, brownies and muffins, they also make some of the best vegan donuts New Orleans has to offer.

Seed – I know it’s already listed at the top of this article, but for vegan versions of traditional New Orleans favourites you really can’t go wrong with Seed. In addition to vegan gumbo and vegan po boys, they are also the only place in New Orleans to serve vegan beignets!

Blaze Pizza – the Veg Out Pizza is topped with zucchini, red onion, mushrooms and red sauce. And you can even order it with vegan cheese at no extra charge!

Breads on Oak – King Cakes are a must during Mardi Gras season, and at this time of year Bread on Oak offers a vegan version of this classic, multi-coloured treat. Their vegan king cakes are even available for shipping.

Killer Poboys – Both locations of this traditional sandwich shop offer vegan versions of the classic poboy, such as a roasted sweet potato poboy with a black-eyed pea and pecan spread, pickled shallots and wilted greens.

Want to explore more of the region around New Orleans? Be sure to check out Mobile, Alabama, just a two-hour drive along the Gulf Coast. Mobile was also founded by the French, so its architecture and culture is similar to that of New Orleans, only it's smaller and more family-friendly.

It even has its own Mardi Gras celebrations! And you can find some great vegan food in Mobile too.

Here are some more vegan guides to destinations in North America: 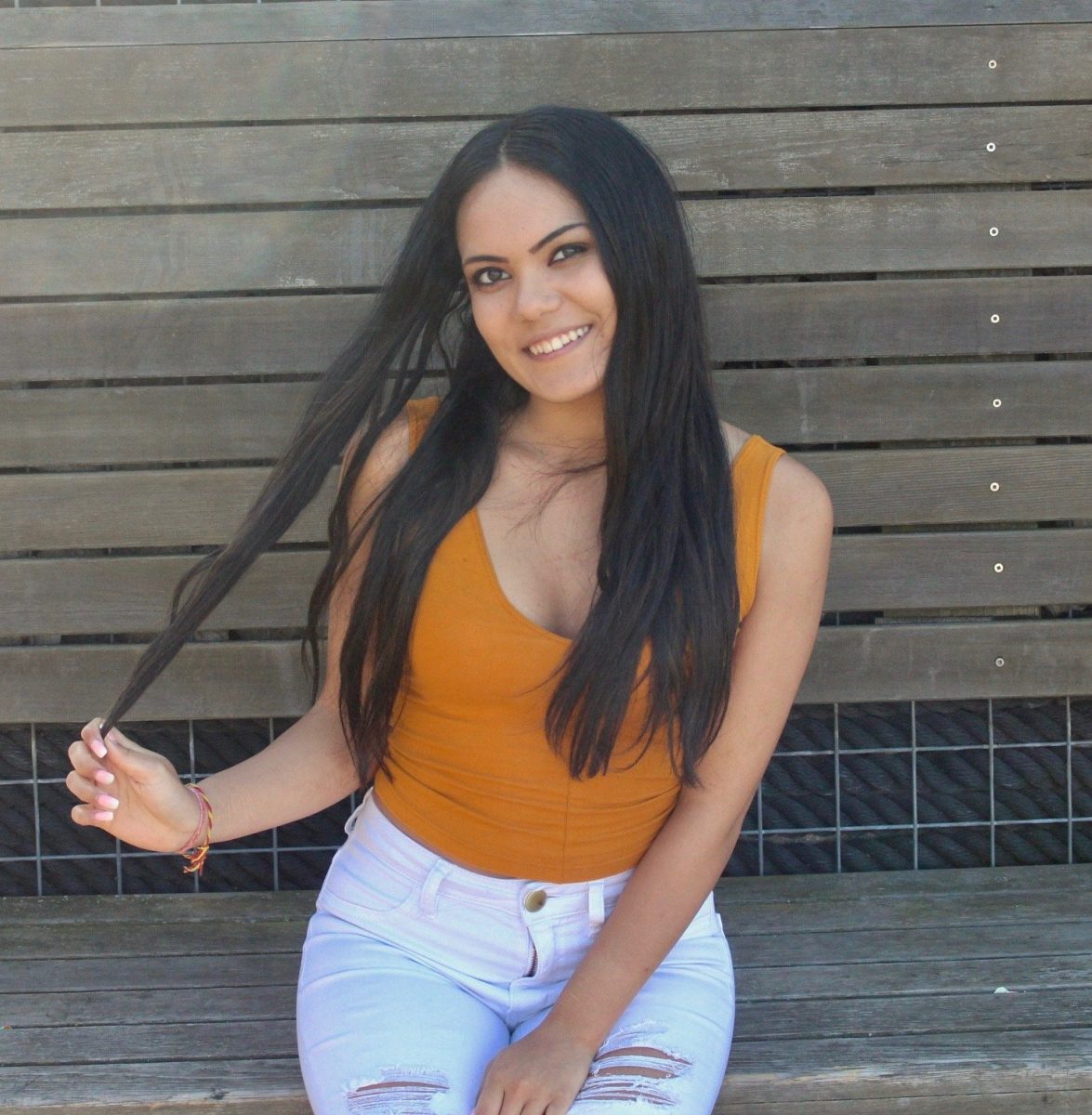 Honica Sharma is a psychology student, ethical vegan of 2 years and vegetarian of 8 years. Check out her blog, Pocket-Sized Vegan, where she writes about vegan food and lifestyle. You can also follow her on Instagram. 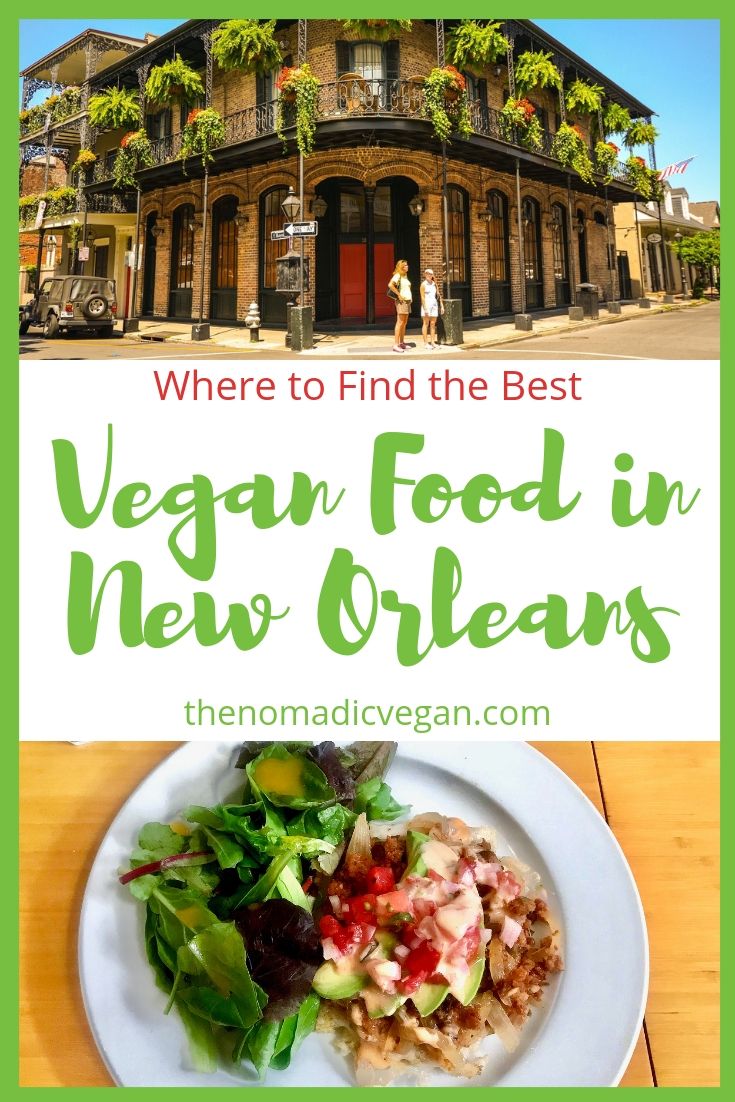