Where to Taste Organic Vegan Wine in Tuscany 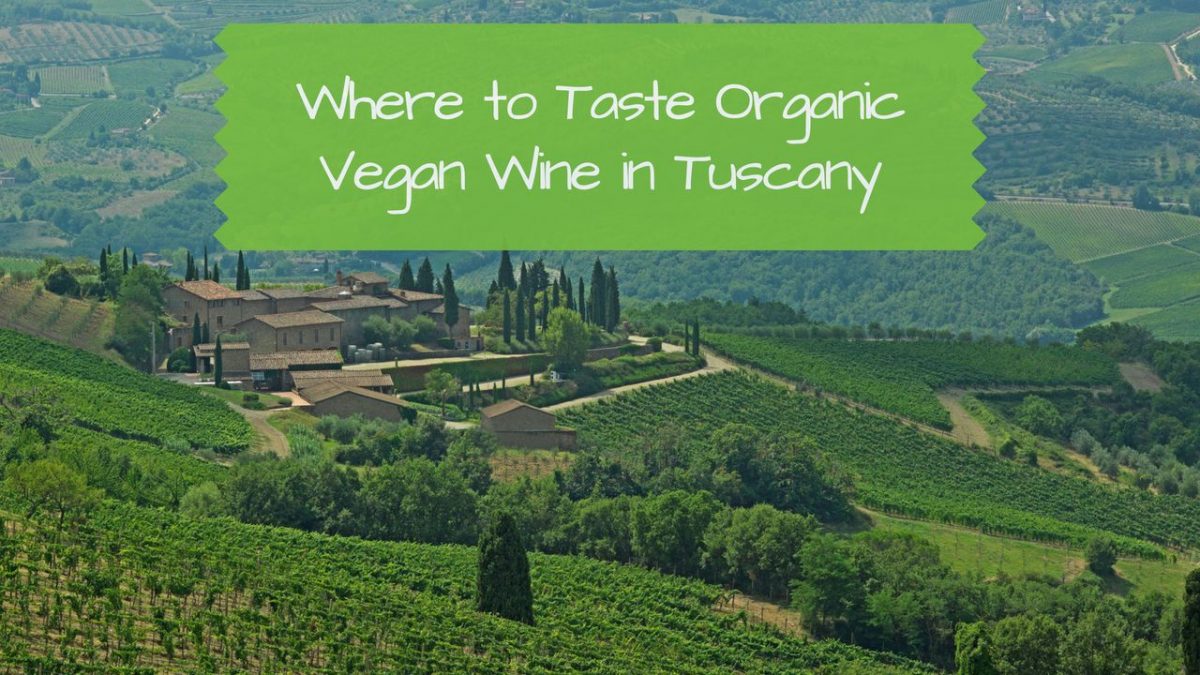 How easy is it to find a delicious vegan meal paired with an organic vegan wine in Tuscany?

At first glance, meat-heavy Tuscany may not seem like the most vegan-friendly Italian region. But the truth is, just like everywhere else in the world, you just need to scratch under the surface to find many traditional vegan dishes, including lots of vegan Italian dishes you’ve never heard of. 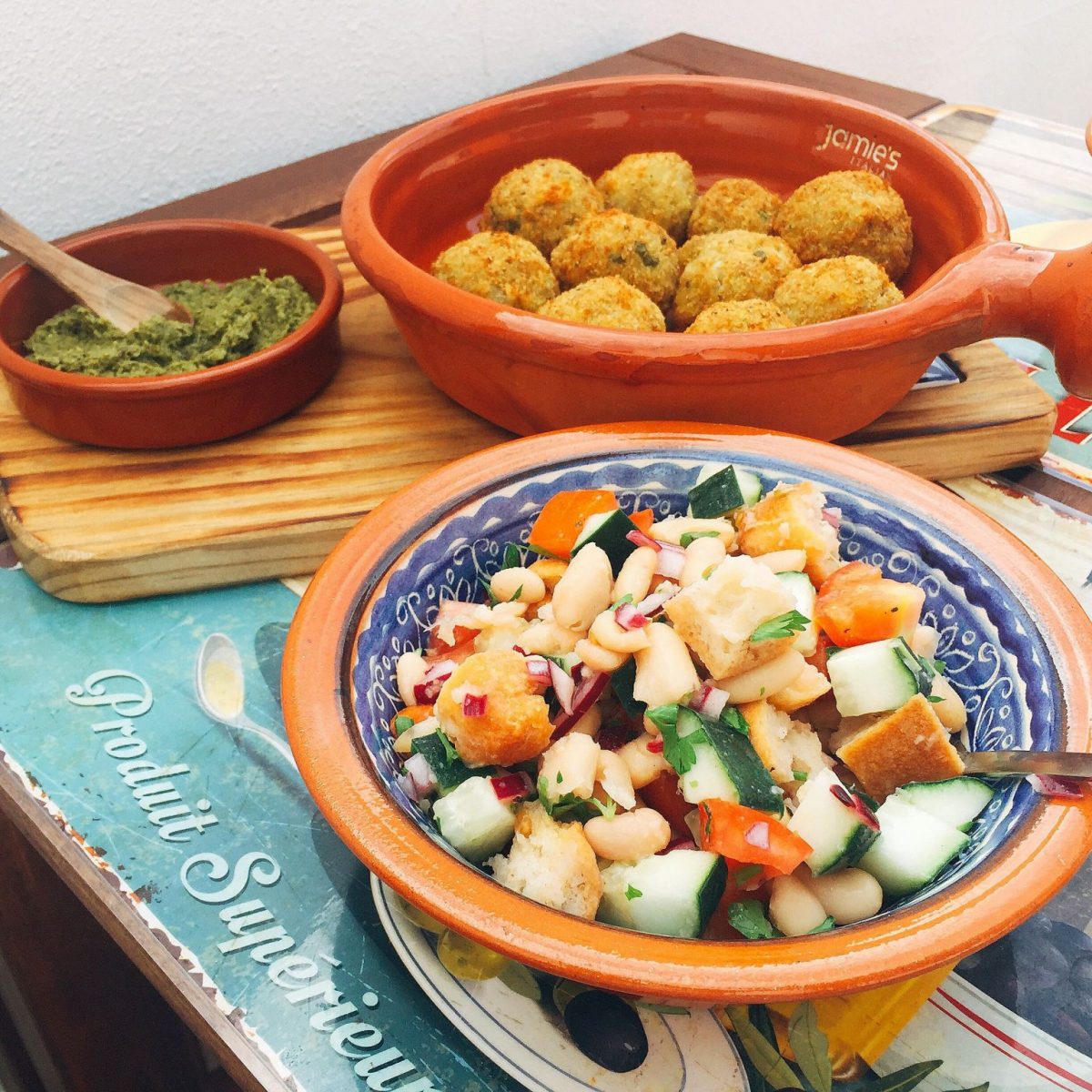 Food aside for a moment, one of the things that Tuscany is famous for in Italy and throughout the world is its wine, with some of the most famous Tuscan wines being Chianti, Chianti Classico, Maremma and Montalcino.

Surely these wines are all vegan, right? What can be more vegan than a drink made of grapes?? Unfortunately, it’s a bit more complicated than that. 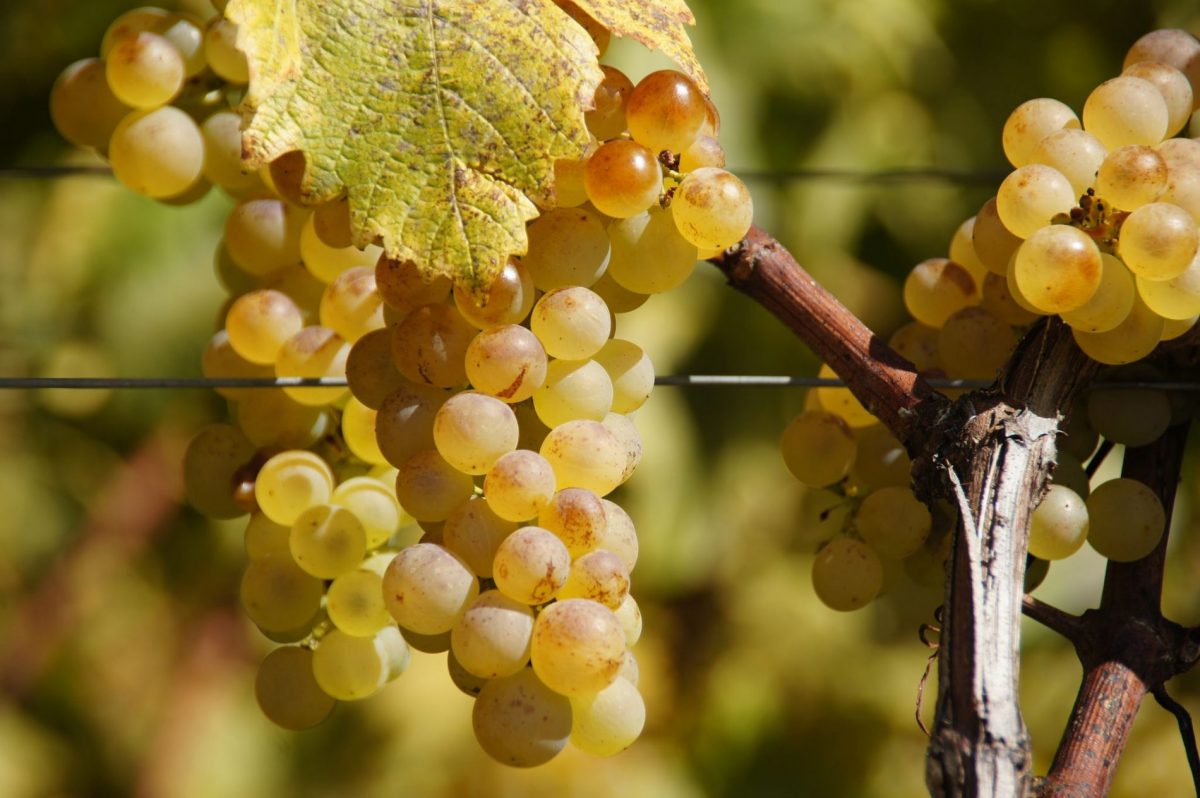 During the fining stage of winemaking, any number of animal-derived products as filters, including casein (from cow’s milk), albumin (from chicken’s eggs), gelatin (made from various animal body parts) and isinglass (from fish swim bladder).

Clarification occurs naturally in wine, but, for commercial reasons, this process is often accelerated to make the wine ready for consumption quicker.

It is not a hard and fast rule – there are many wines that do not contain any animal products – but it is quite common, especially in some historical regions and traditional blends, or for wines that need to go on the market soon after harvest.

Luckily, the rise of veganism is being felt in the wine world, and the industry is responding to market demand and consumers’ concerns. While there aren’t many self-proclaimed vegan wineries in Tuscany, there are a good number of them that offer wines free from all animal products. 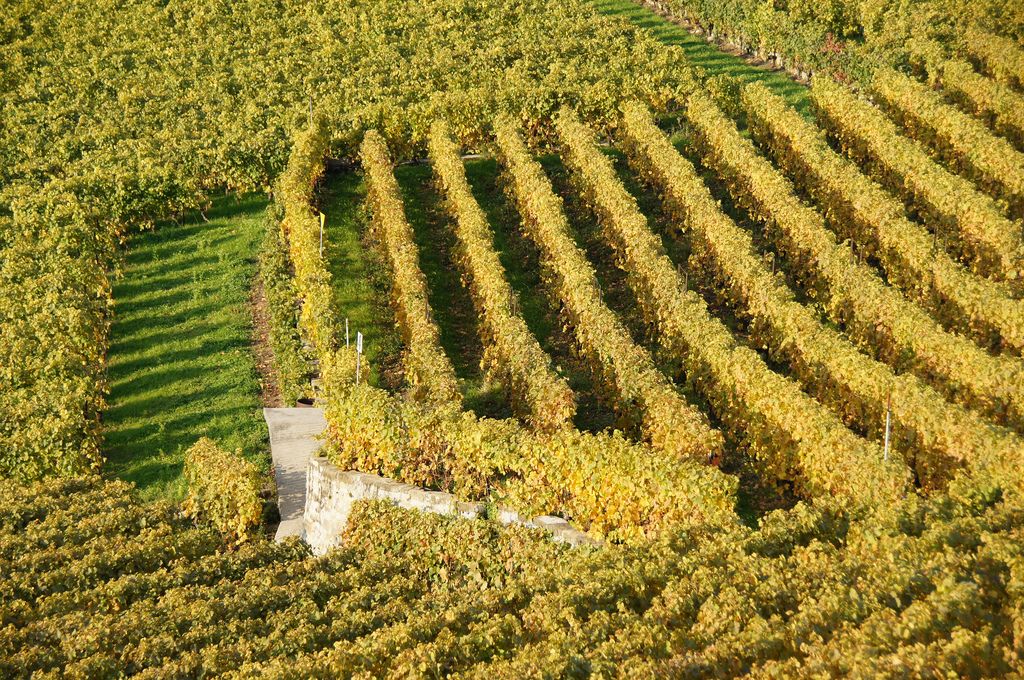 The best time to visit a vineyard is in early autumn, when the grapes are ripe and the leaves are golden.

Here is a non-exhaustive list of vegan wine brands and wineries in the region. If you plan to stop in at any other wineries for some tastings while you’re in Tuscany, it’s a good idea to call or book ahead and ask if their wines are suitable for vegans. There are also online resources that can help you with this, such as barnivore.com. 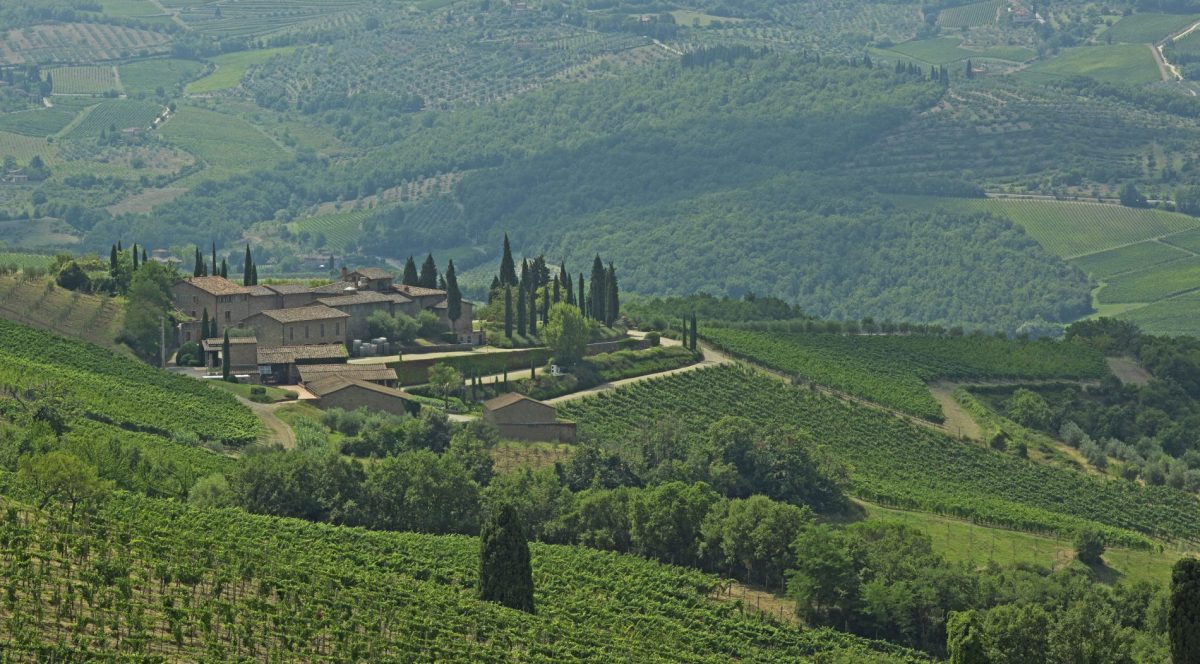 The beautiful estate of the Querciabella winery

Querciabella is a prestigious vegan and organic winery located in Greve in Chianti (in the same province as Florence) that produces seven types of vegan organic wine, all internationally praised for their deliciousness. Querciabella has been organic since 1988 and biodynamic since 2000.

However, owner and vegan investor Sebastiano Cossia Castiglioni more recently decided to ditch the traditional animal-based biodynamic methods and developed a cruelty-free and plant-based protocol to protect biodiversity in the vineyards.

Querciabella proudly calls itself an organic, biodynamic and vegan winery, and over the years it has partnered with other vegan businesses and sponsored various animal charities, including Mercy for Animals and Sea Shepherd. 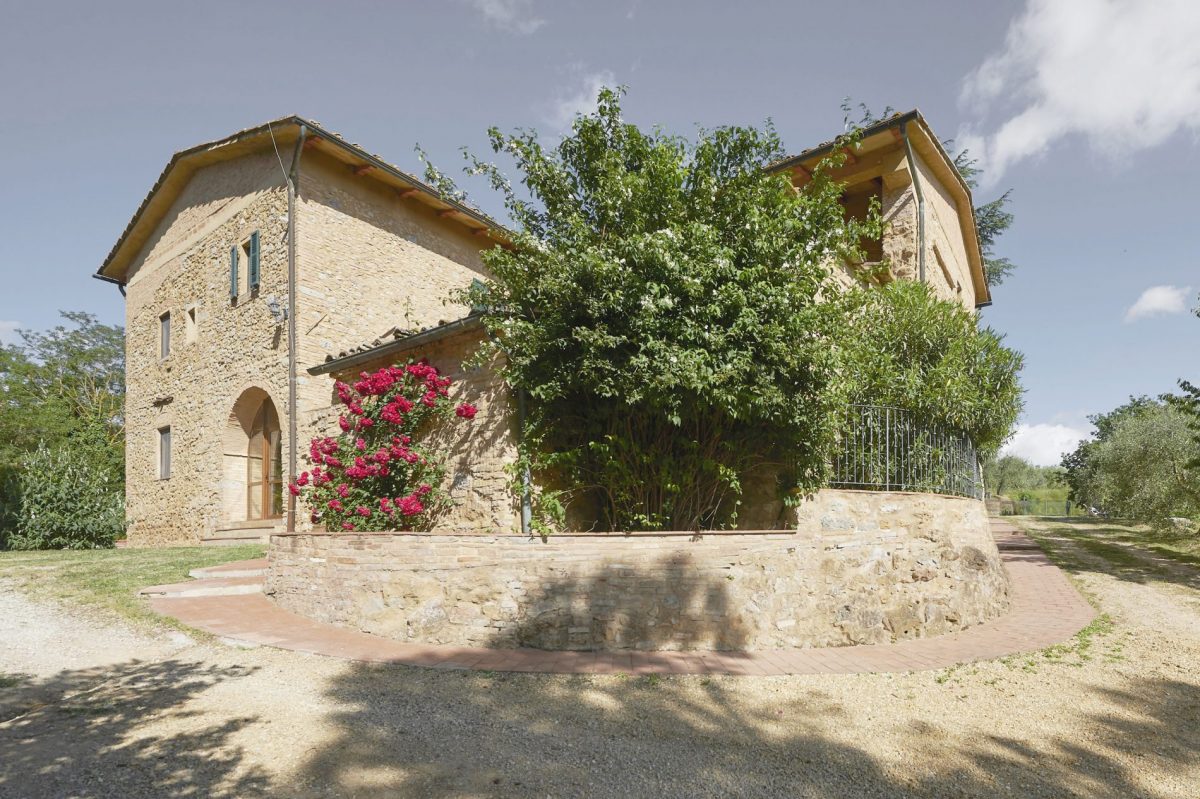 Historic farmhouse at the luxurious resort of Agrivilla I Pini

Near the medieval town of San Gimignano is the “biotique agrivilla” I Pini. Here you’ll find a stunning renovated farmhouse, where the owners offer accommodation and food at their vegan restaurant.

I Pini produces three different types of vegan wine, which visitors can pair with scrumptious vegan delicacies during their stay. They also have a fruit and vegetable garden and a number of bee colonies, which they do not exploit for honey.

The same owners also run La Vimea Biotique Hotel in the far northern region of Trentino-Alto Adigo. It's the first 100% vegan hotel in Italy and is nestled in the sun-kissed mountains of the Val Venosta valley.

Hidden in Murlo, in the province of Siena, on 654 hectares of organically farmed land, is Fattoria Casabianca. The farm produces nine wines, five of which have been certified vegan since 2014.

Earlier this year, their Chianti Colli Senesi DOCG 2016 was judged the best in show during a Chianti Lovers competition in Florence. The winery owns five restored farmhouses that are available as holiday rentals in the unspoiled Tuscan countryside. The perfect place to relax with ones of their bottles of organic vegan wine! 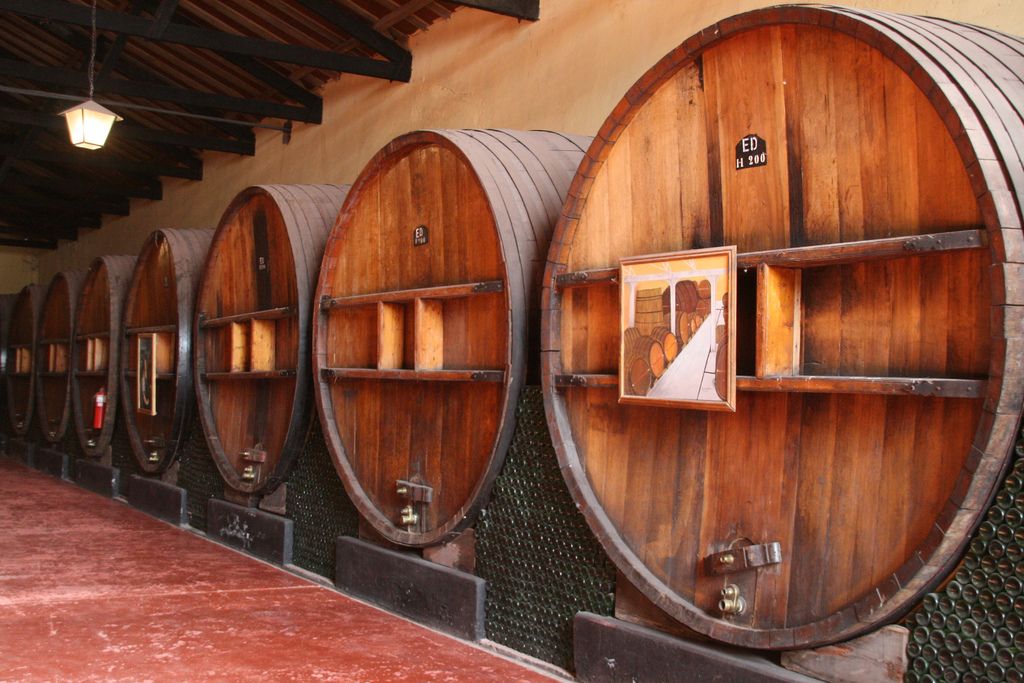 Wine left to age in large oak barrels, just like in the old days.

The Sensi family founded the winery in 1895, and nowadays it produces a wide range of Tuscan wines in Lamporecchio, near Pistoia. Although not all of their wines are vegan or organic, they produce a Chianti DOCG Superiore called Vegante, which is vegan certified and was born out of the family's “desire to return to the origins of the Chianti and to the tradition of the varietals used at the beginning of 20th century”.

Not only is the wine vegan, the bottle label is made out of recycled paper, and the packaging is made from all eco-friendly materials. 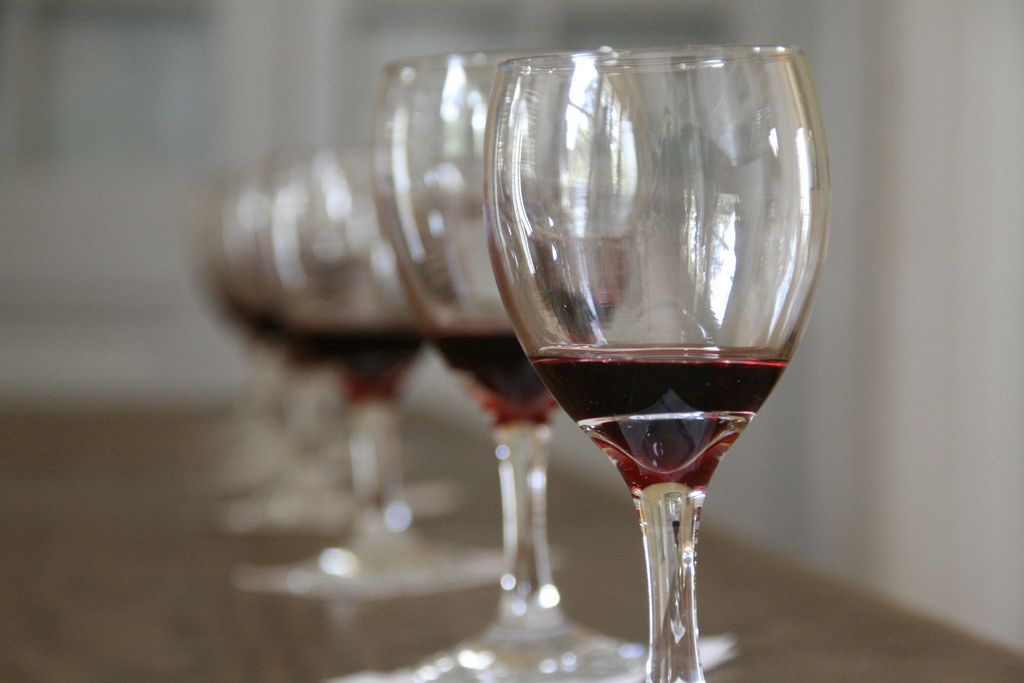 A wine tasting is the perfect activitiy to add to your Tuscan adventure.

Located in the province of Siena, Palagetto is a family estate that produces several wines, including two types of vegan wine with the “Toscana IGT” designation: Veggy Red (a 100% Sangiovese) and Veggy White (a blend of Trebbiano and Malvasia). The winery also offers the opportunity to stay in one of its villas or country retreats near San Gimignano. 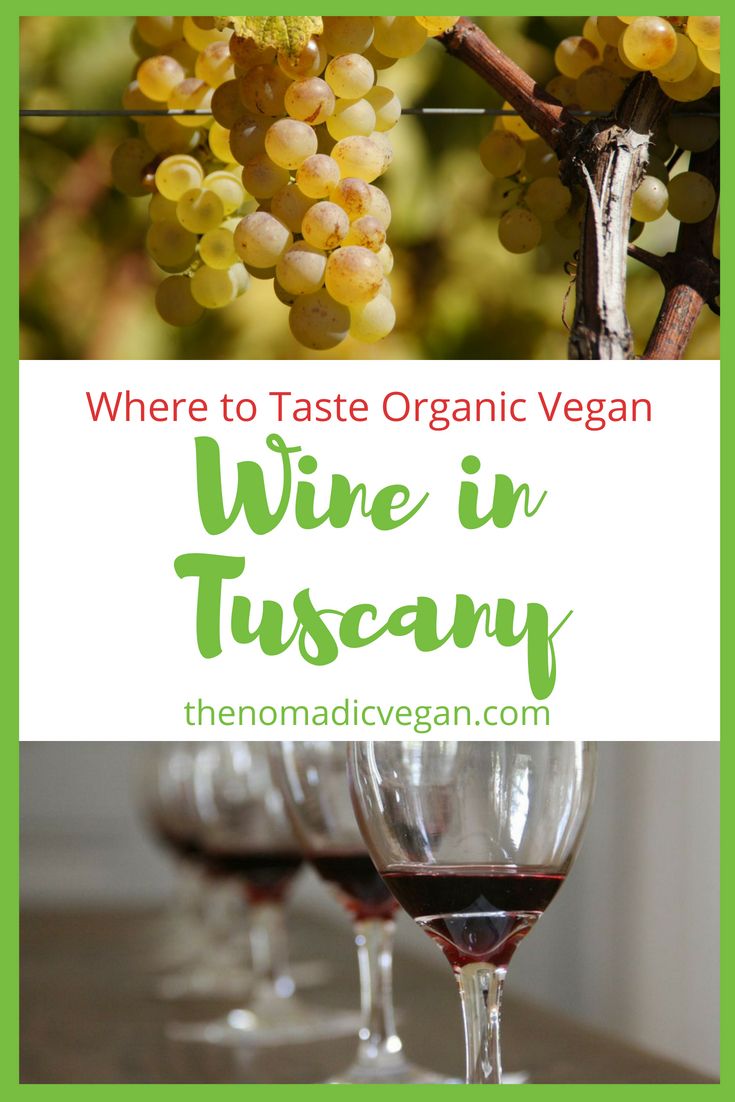 When you’re out at a party, a bar or a restaurant, it’s not always possible to know whether the wine you’re being served is vegan, and I personally choose not to stress about this too much. Being vegan is about doing the best you can to cause the least harm, and that will mean different things for different people.

But when visiting a winery, this is one occasion where you CAN expect to get a straight answer about whether animals were harmed to produce the wine. After all, you’re speaking to the producers themselves! And as more of us start asking for vegan wine, we will see more and more options like the ones listed above.

Traveling to other parts of the country? Be sure to check out my Ultimate Vegan Guide to Italy!