Rediscovering Rome as a Vegan

UPDATE February 2020: For my latest vegan Rome recommendations, check out my new guide to vegan dining in Rome’s city center. All the places listed in the guide are near the main attractions and can be reached on foot.

The city where Nick and I met in 2001, where we returned to get married in 2007, and where we formed some of our deepest and longest-landing friendships. Even though these days my visits there are few and far between (the previous one was three years ago!), it’s still the place I like to call home. I love everything about the city – the history, the architecture, the people, the language, and yes, the food.

So let’s talk about the food. I’ll be honest; initially I was slightly nervous about my first visit to Rome as a vegan. I’d be lying if I said I didn’t feel a twinge of regret about foregoing most of my favourite Italian dishes. But then I decided to look at it from a different angle.

This was an opportunity to broaden my horizons and rediscover Roman cuisine all over again! Just like when travelling through Greece I had discovered plenty of dishes that most tourists never found out about, having stuck to the more familiar options like moussaka or souvlaki, there were bound to be plenty of naturally vegan dishes in Italian cuisine that I had been ignoring for all these years.

We are talking about quintessential Mediterranean fare, after all. Dishes that were delicious, wholesome AND allowed me to manifest my own most deeply held values at every meal.

And since it was typical Roman fare that I was looking for on this quick, two-day visit to Rome, Trattoria da Sergio Alle Grotte was a pretty good place to start. This is a no-frills traditional Roman eatery in the heart of the historic centre near Campo de’ Fiori, complete with the red-and-white-chequered tablecloths that have become the cliché of Italian restaurants the world over. 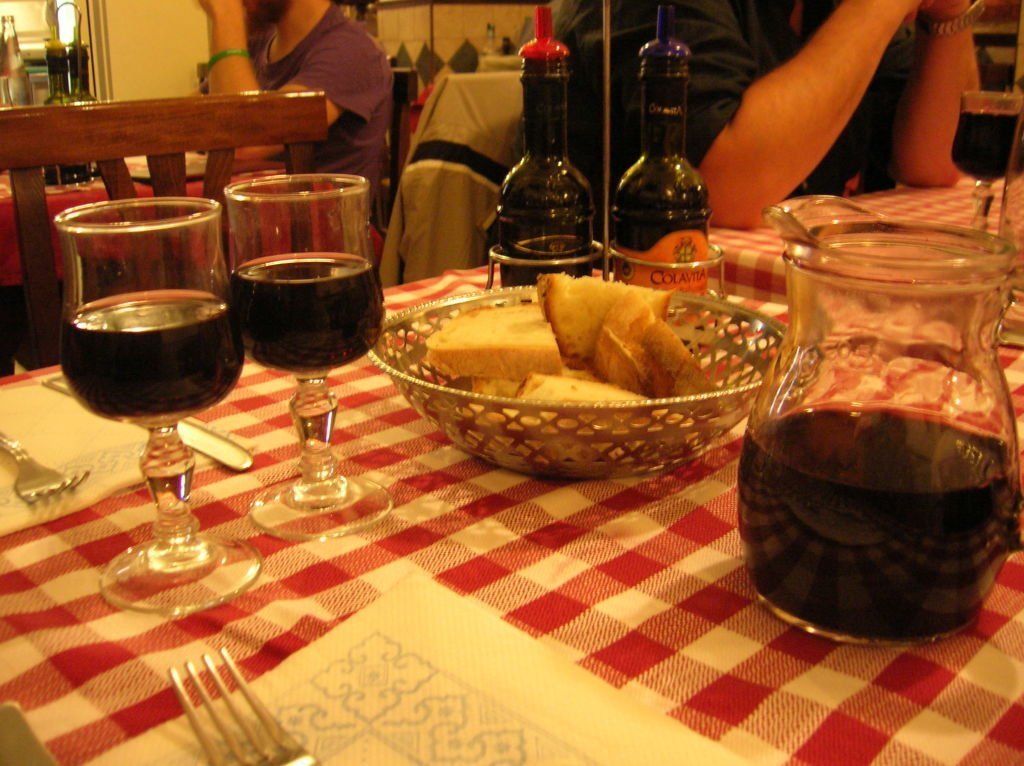 And check out this mural painted on the wall. How’s that for ambiance? I love the parrot. 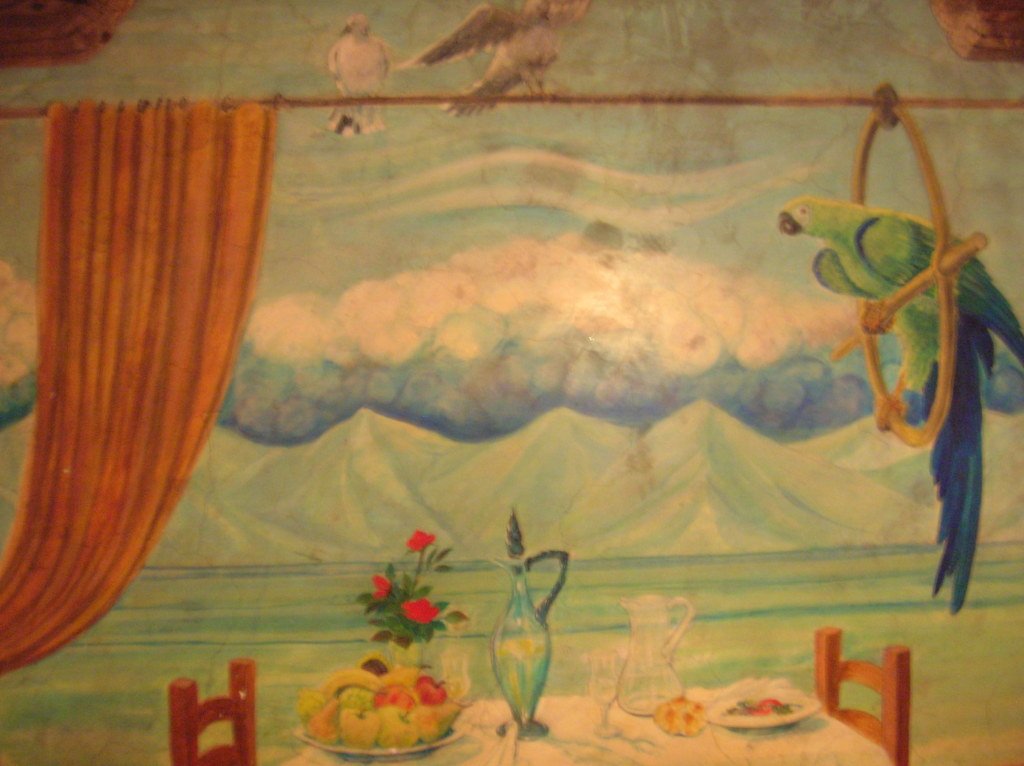 Sergio keeps a relatively short menu, with nothing but the most traditional fare – the dishes that Romans have been filling their bellies with for centuries. One of these is spaghetti all’arrabbiata. The name actually means “angry” or “enraged” spaghetti, which is pretty appropriate for this hot, peppery tomato-based sauce. 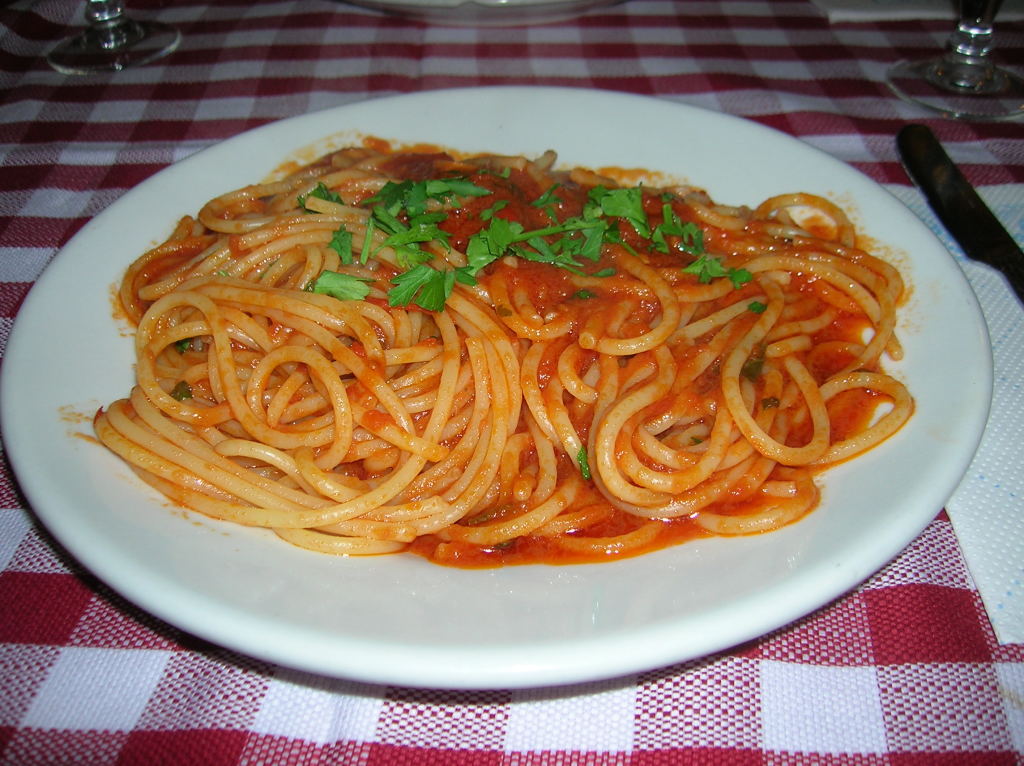 Paired with some red house wine and a basket of chewy yet crusty Italian bread (I had forgotten how wonderful the bread is here!), this was the perfect meal to start off our trip.

The next day, we decided to have lunch in the Jewish ghetto, which is well-known for its many kosher restaurants and bakeries, and for typical dishes such as carciofi alla giudia (Jewish-style artichokes). Even though this is quite a famous dish in Roman cuisine, I had only had it once, many years ago, and could only vaguely remember what it tasted like. This is a little weird, since artichokes are one of my favourite foods, but I guess when I lived in Rome I was kind of stuck in a rut of ordering the same pasta dishes over and over again and so I never branched out much. Well, THIS is what I’d been missing out on: 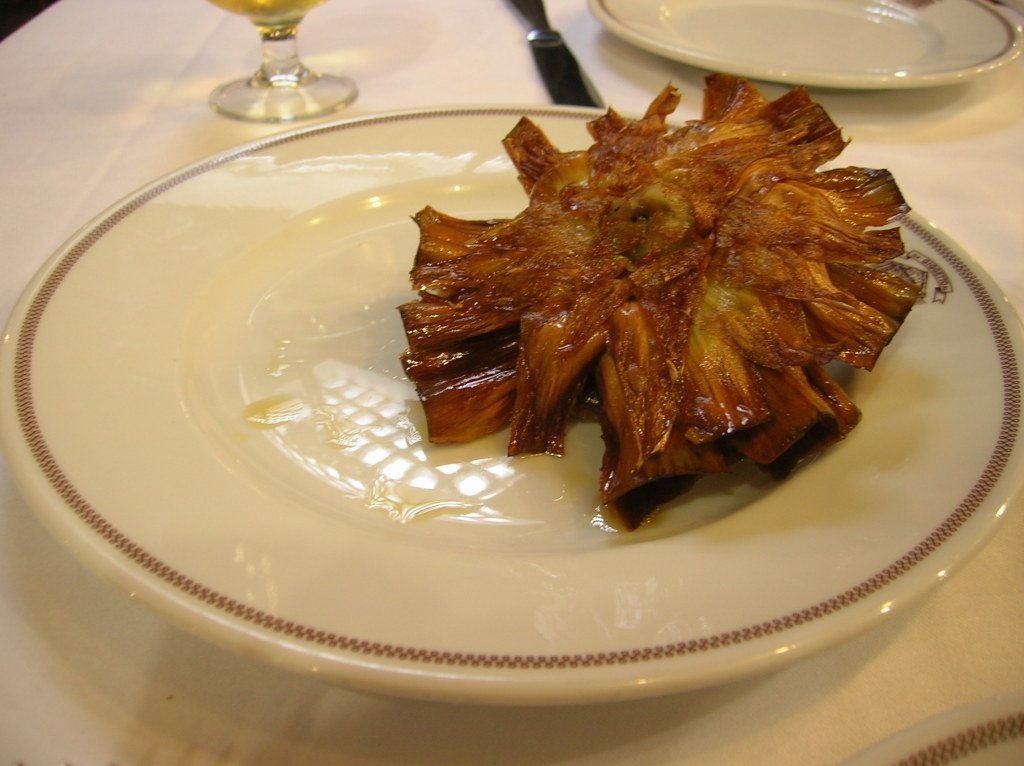 I ordered this beauty at Osteria da Giggetto, a long-standing family-run restaurant right next to the ancient ruins of the Portico d’Ottavia. Carciofi alla giudia is one of their specialties, and I knew it was a good sign when, as soon as we walked through the front door, we saw stacks of crates filled with artichokes and this guy from the kitchen busily plucking off the outer leaves to prepare them for frying. 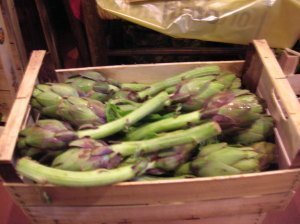 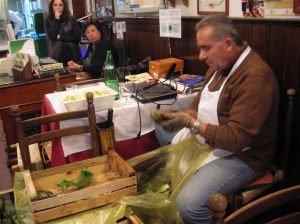 If you’d like to have a go at making these yourself, Osteria da Giggetto even provides the recipe in their brochure:

So there you have it. I never said they were healthy! But they are delicious, and just about every person who entered the restaurant while we were there ordered these as a starter. I decided to follow this with a hearty bowl of pasta e ceci (pasta with chickpeas). 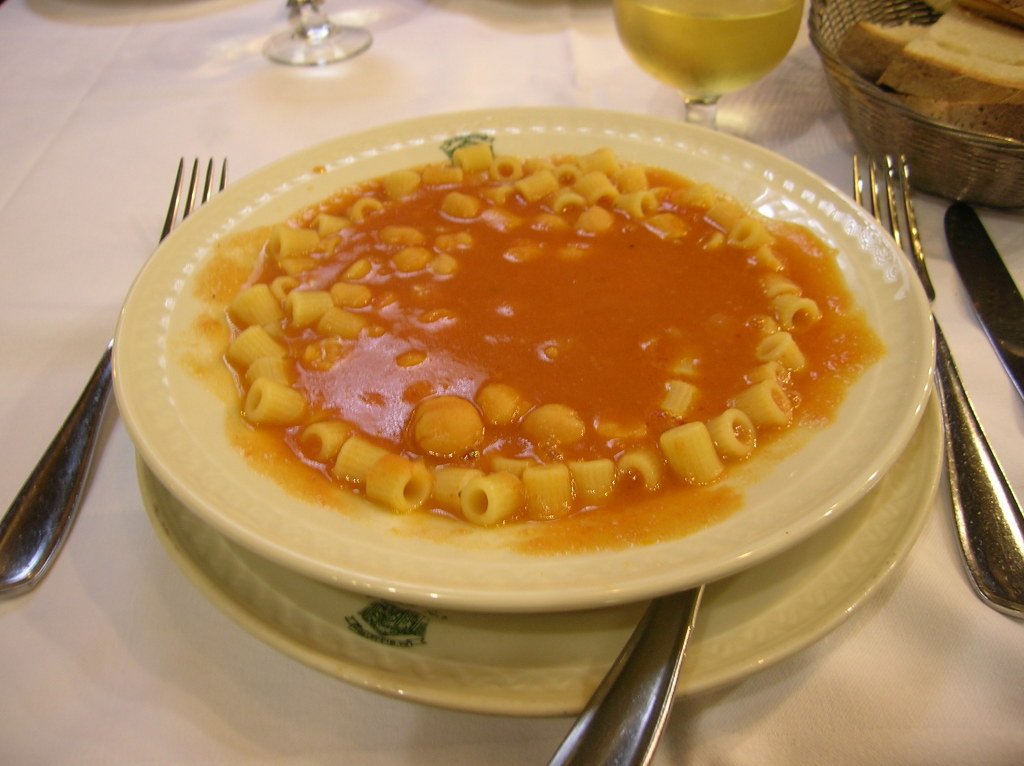 A simple dish that originated as peasant fare (like so many now famous Italian dishes), this is a tomato-based soup similar to pasta e fagioli, except that it is made with chickpeas instead of white beans. It’s the perfect dish to warm you up on a cold and wet November day. I had never tried it or, to be honest, even noticed it on menus before this trip. But now that I was looking at Roman food through vegan eyes, this and other dishes starting jumping out at me all over the place.

Even though I was quite full by the time I finished the bowl, on the way back to our hotel I insisted on stopping for dessert. I had read about an intriguing new place that had opened up about a year ago, and there was no way I was going to miss out on the chance to have a …. wait for it …. 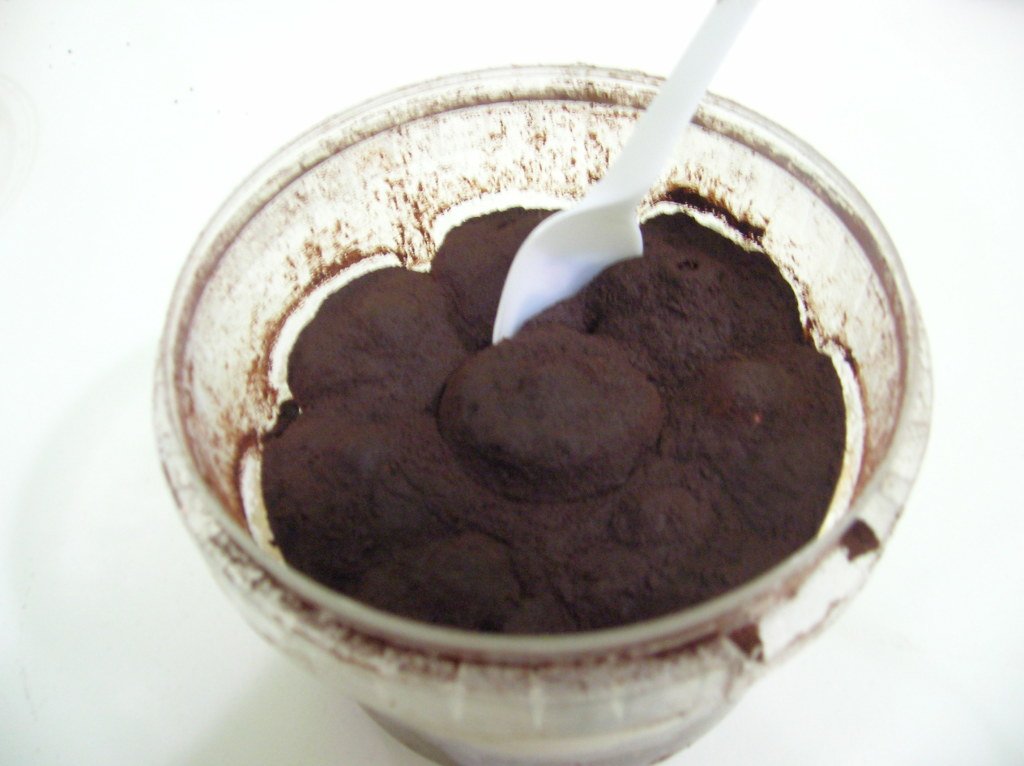 That’s right, folks. Just a few minutes’ walk from our hotel, in a small piazza off Campo de’ Fiori, is a place called Universo Vegano. It’s part of a chain of vegan fast-food restaurants in Italy. [UPDATE: As of June 2019, Universo Vegano in Rome is now closed, although the one in Florence is still open.] 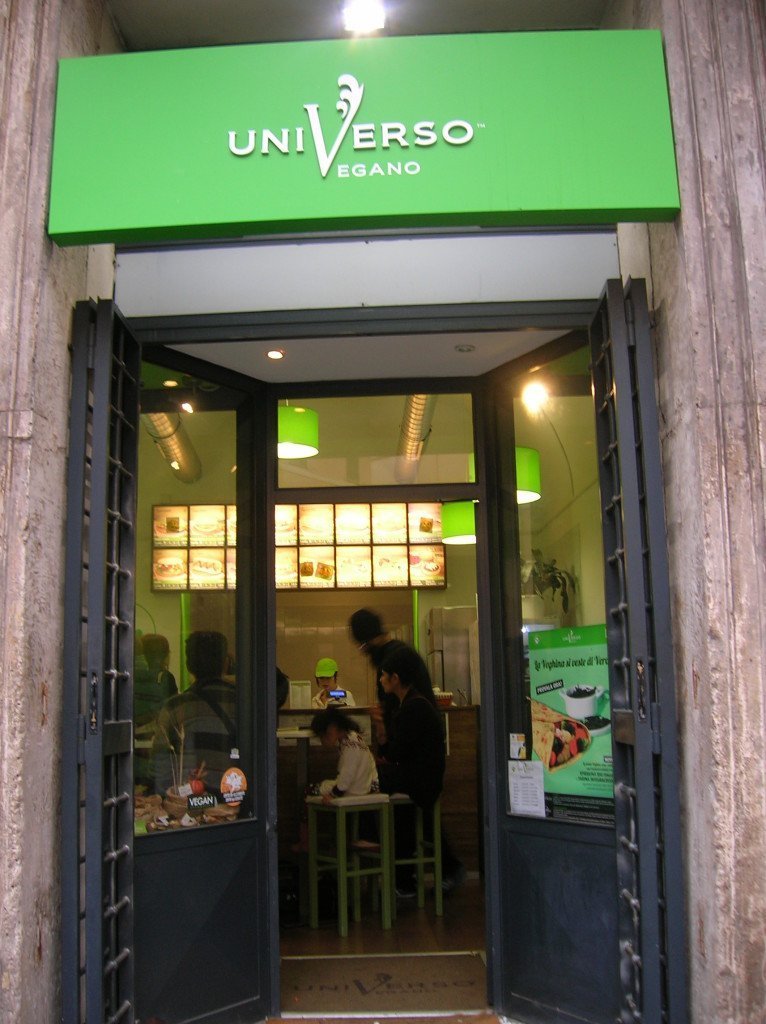 The fact that this place exists kind of blows my mind. It’s like stepping into the future, into a utopian vision of a world where the kebab shop on the corner, the local hamburger joint and the travelling hot dog stand have all gone vegan. Except that THE FUTURE IS NOW. Right now, you can walk into a Universo Vegano in Rome or any of nine other Italian cities and order a vegan kebab, a vegan hamburger or a vegan hot dog. You will be greeted with pictures of happy farm animals on the walls who are, as the slogan says, “friends not food”. 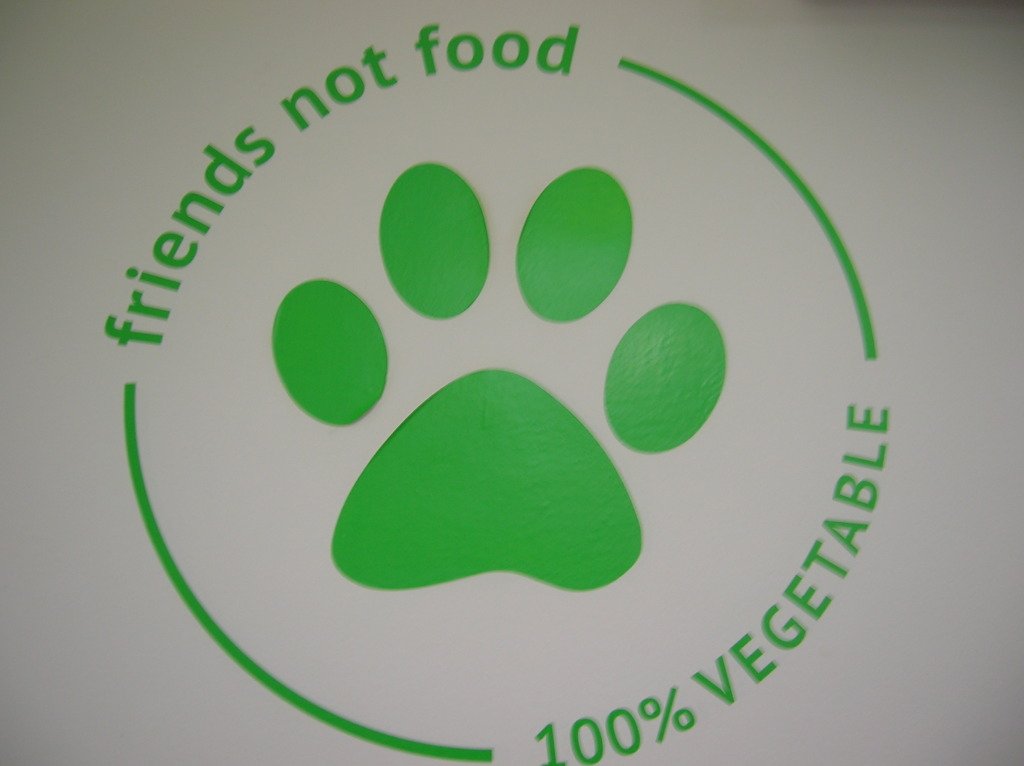 Now I’ll be honest, the food on offer here is not what I would dream up as my vegan on-the-go meal of choice. It’s pretty heavy on plant-based meats, and, since I was never that into meat even as an omnivore, I don’t feel the need to recreate the taste or texture now that I’m vegan. But there are obviously plenty of people who do like the taste of meat (the more than 150 billion animals slaughtered every year are proof of that), and that being the case I am absolutely thrilled that Universo Vegano is there to offer an alternative. It was pretty full both times I went in, so whatever they’re doing seems to be working.

In the end I did grab a sandwich from there just before we left Rome, since I wasn’t sure what I would find in the airport. This turned out to be a smart move, because since we were flying with EasyJet we ended up in the less salubrious part of the terminal where food options were pretty limited. I went with the Focaccia Vegan, which contained a plant-based omelette rather than plant-based meat, plus vegan cheese, mayo, lettuce and tomato. 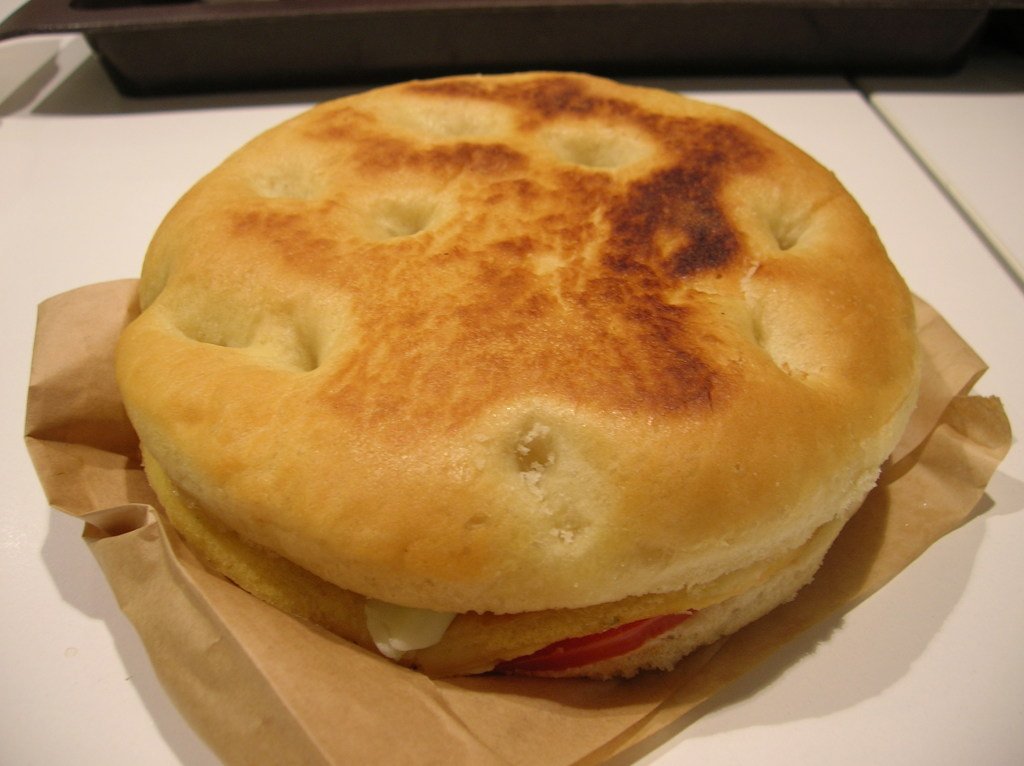 I thought it was pretty good, and I’m sure it would have been better straight off the grill rather than several hours later. The omelette didn’t taste that much like eggs to me, more like farinata (a savoury pancake made from chickpea flour), but I was OK with that. Of course, I couldn’t resist trying out another one of their desserts, the Veg’Helene: 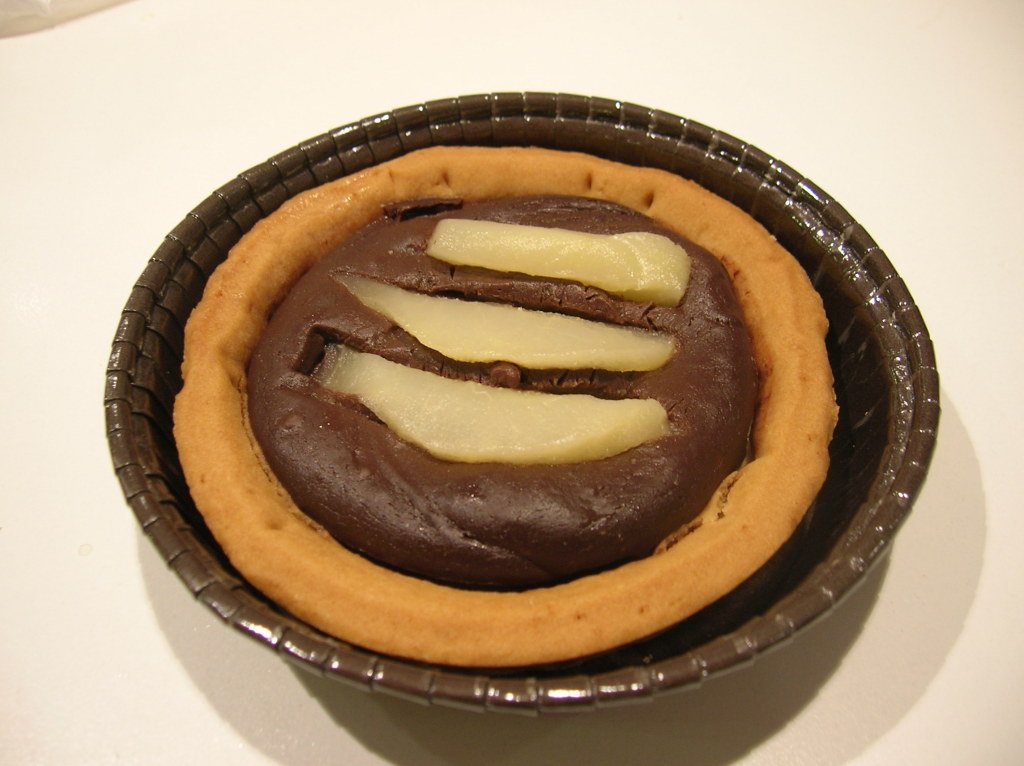 This was basically a poire belle Hélène made into a pie. It was pretty good too.

But let’s back up now to Saturday night. In the afternoon we met up with friends for a drink at a place called Trattoria Moderna, which was also near Campo de’ Fiori on vicolo de’ Chiodaroli. Since it starting raining cats and dogs and we really didn’t feel like going anywhere, we ended up staying for dinner and spending a total of about six hours there. It turned out to be quite vegan-friendly, and I can highly recommend it. The first page of the menu was all vegetarian, and even though not many of the options were vegan the waitress understood what veganism was and explained which of the menu items could be veganized. In the end I chose the fettucine with mixed mushrooms. Since fettucine is a fresh pasta and is therefore made with eggs, the waitress offered to swap it out for penne, and she also threw in some tomatoes for good measure. 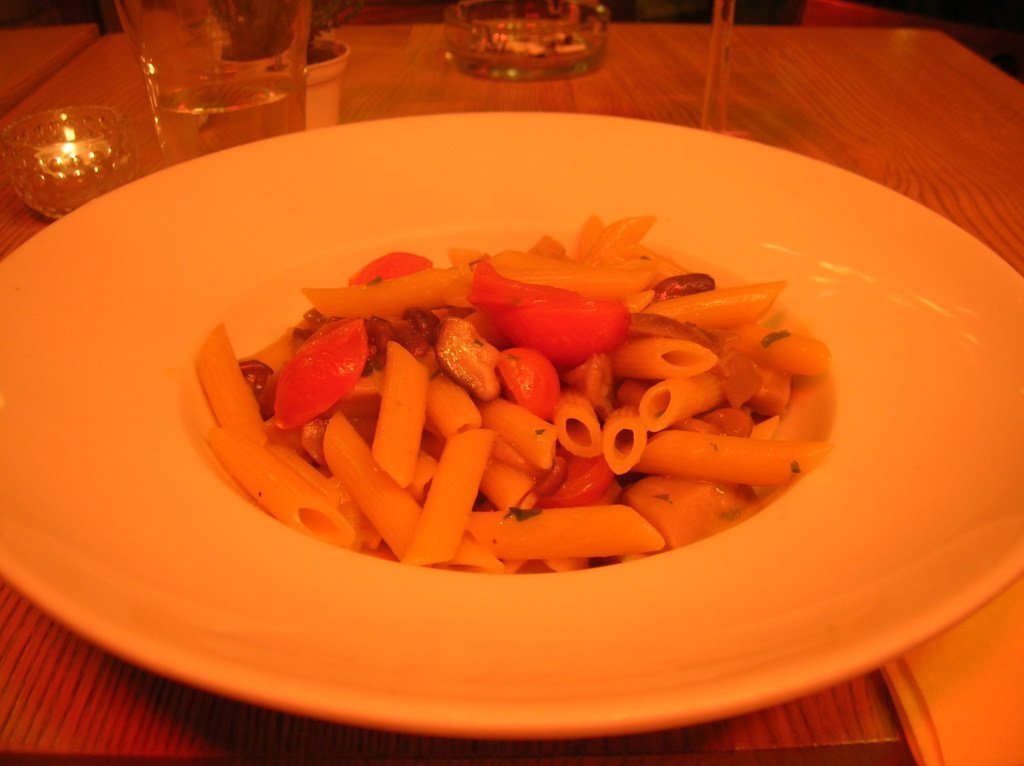 I also had a couple bites of dishes our friends ordered, like the bruschetta with tomatoes and the chicory with oil, garlic and chili. 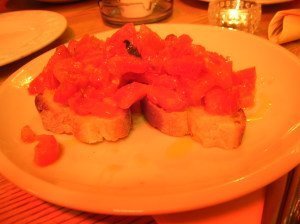 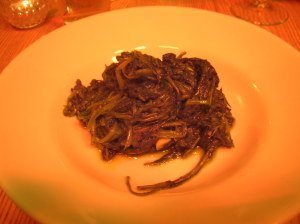 Sorry for the bad lighting; the photos don’t do it just justice, but I can assure you it was delicious! I really loved the chicory; it had quite a spicy kick to it!

We now have just one meal left in the Eternal City, and I’ve saved the best for last. On Sunday afternoon we met up with our dear friend Gigi, who took us to a place near Piazza Navona called Il Corallo. It was a restaurant we’d never been to before, but one to which we will most definitely return the next time we’re in Rome. The emphasis here is on fresh, seasonal ingredients, as evidenced by this crate of huge porcini mushrooms at the entrance: 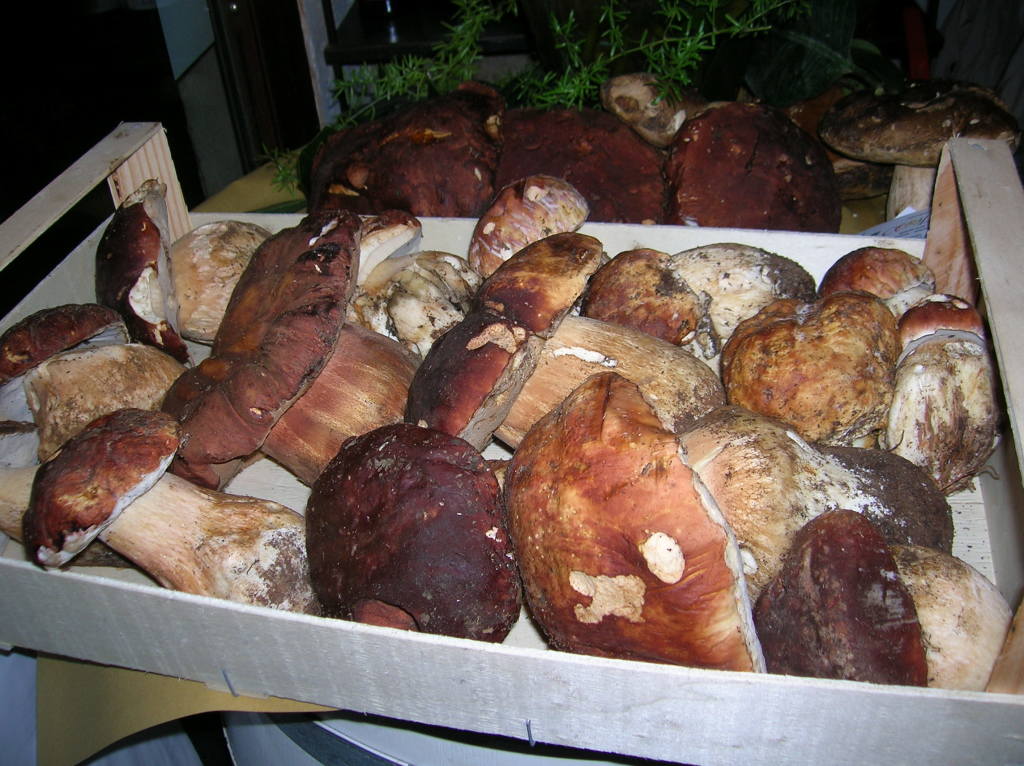 The handwritten menú del giorno took up a whole page and was full of dishes made from foods that were in season at the moment, like porcini and truffles. I was very tempted to try the porcini, but I really had my heart set on having a pizza before we left Rome. So I ordered the pizza ortolana (vegetable pizza) without cheese, and, well, just LOOK at what the waitress brought out: 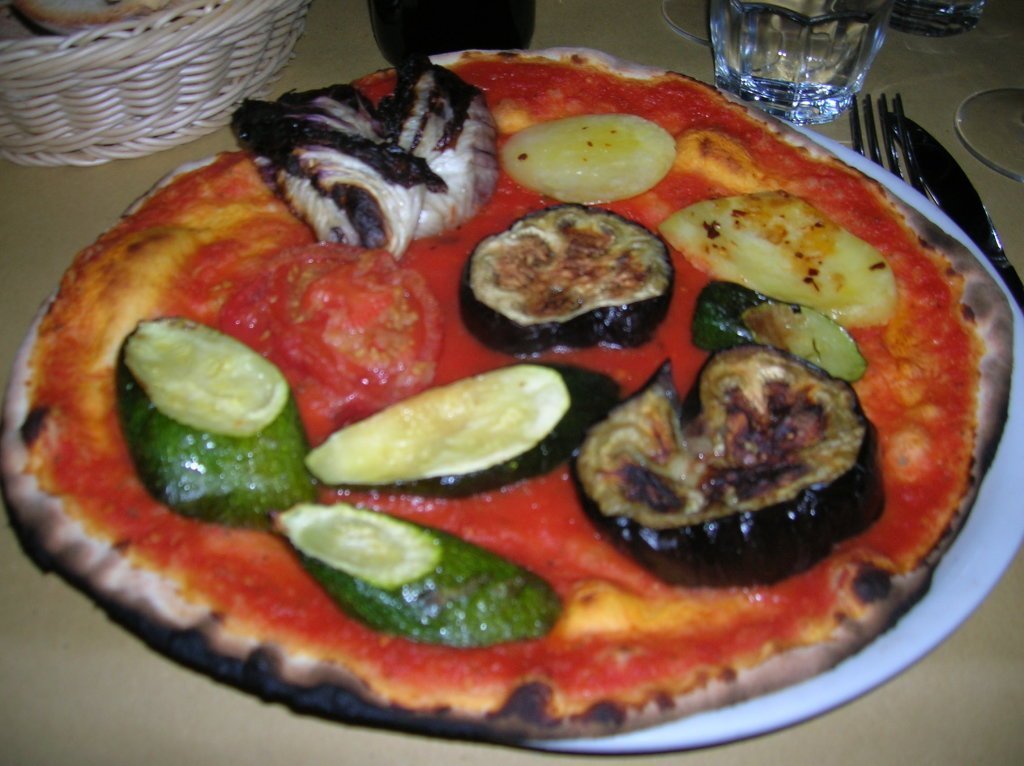 It was covered with grilled vegetable slices that were each the size of my palm! Like having a whole barbecue on a pizza, I tell you. Tomatoes, eggplant, zucchini, radicchio and spicy potatoes. Oh my word. And of course, as I didn’t want to completely miss out on the truffle and mushroom extravaganza, I also ordered a truffle bruschetta as an appetizer: 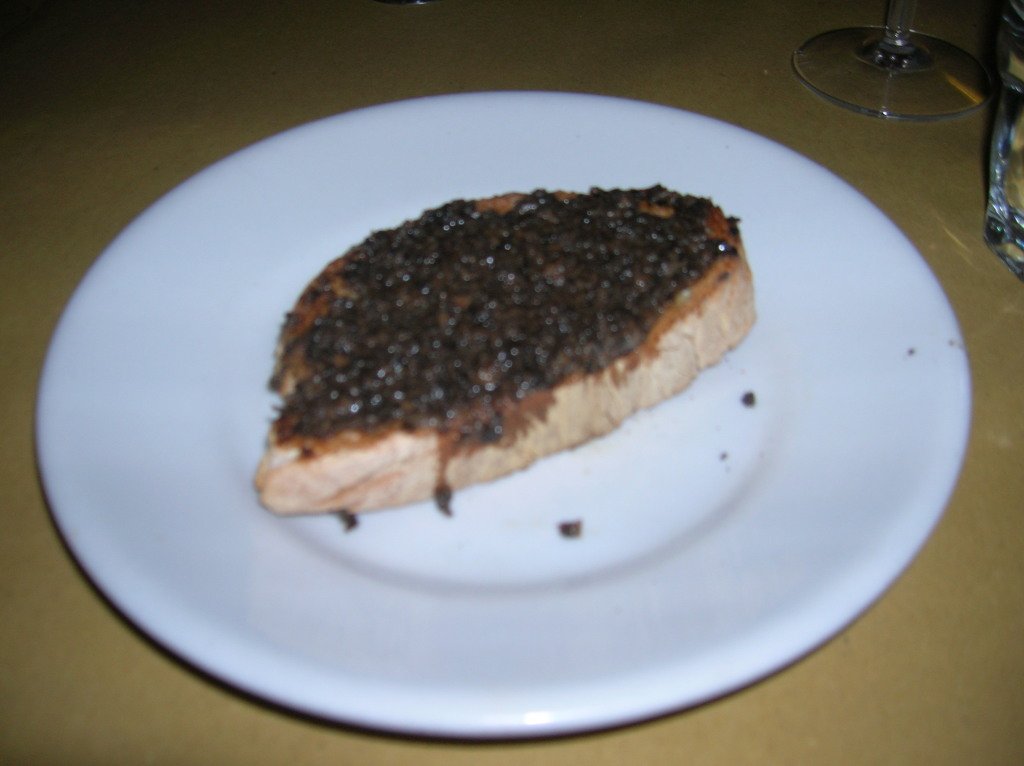 It might not look so appetizing, but it was heaven on a plate.

And that’s all folks! Except, of course, the gelato. But I think gelato deserves a post all its own, don’t you?