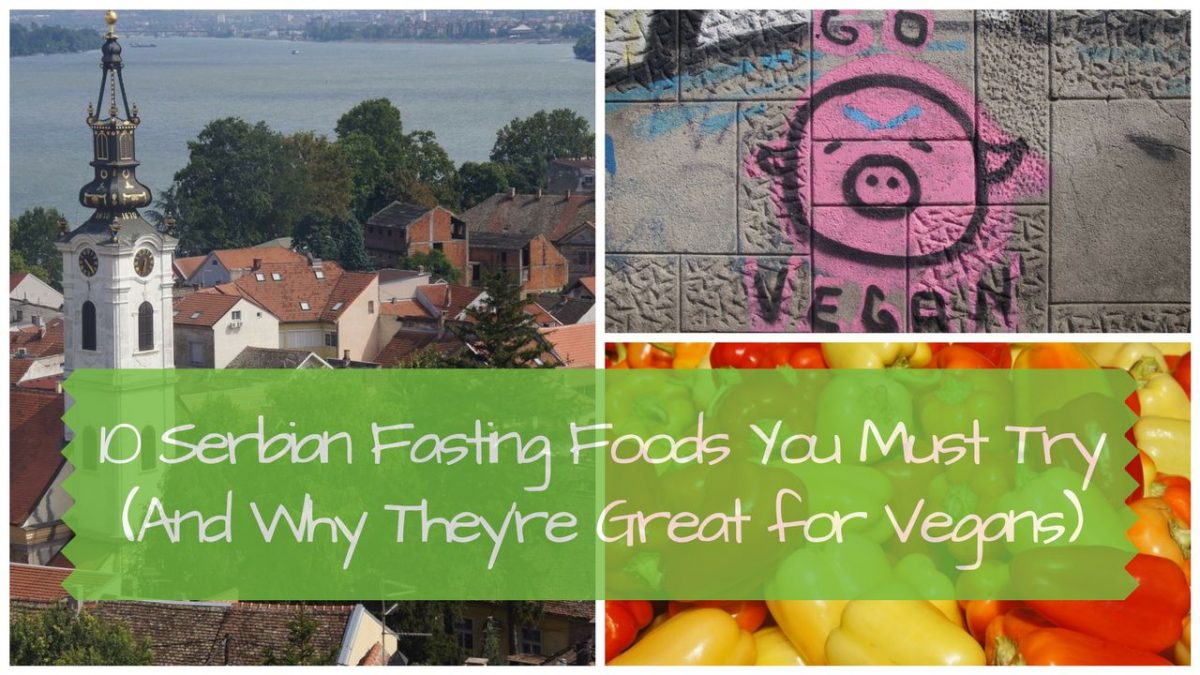 ​Serbian Orthodox fasting is a tradition that’s often misunderstood outside Serbia. The word “fasting” in this case doesn’t mean that Serbs don’t eat anything at all.

Instead, it just means that they abstain from eating certain foods that are prohibited by the Serbian Orthodox Church at particular times of the year, the most important of which is the 46-day Lenten fast leading up to Easter.

So, what are these foods that are avoided during Serbian Orthodox fasting periods? Meat, eggs and dairy products. Sound familiar?

Apart from honey and aquatic animals, the foods eaten during Serbian Orthodox fasting periods are all vegan! Which means that Lent is the perfect time of year for vegans to explore this otherwise meat-loving country.

My good friends Caitlin from The Vegan Word and Sam from Alternative Travelers will be doing just that on their upcoming #VeganLentTour of Bulgaria, Serbia and Montenegro.

When Caitlin asked me if I had any tips on vegan food in these countries, I realized that now was the time to pull out all those notes I’d scribbled down on Serbian Orthodox fasting foods during my four trips to Serbia and actually make a blog post out of them.

Saw this vegan graffiti from the window of a bus in downtown Belgrade. It turned out that our stop was just a little further down the street, so I went back to get a pic with this adorable chick. So glad to see that the vegan message has made it to the streets of Serbia! - #vegansofinstagram #globetrotter #neverstopexploring #nomadicvegan #vegantravel #vegangraffiti #chick #yellow #graffiti #vegansofig #veganfortheanimals #veganforlife #belgrade #serbia #veganbelgrade #veganserbia #vegangirl #veganblogger #govegan

Despite the abundance of vegan graffiti in downtown Belgrade, the concept of veganism is still not that well-known in Serbia. For that reason, you’re probably better off asking for “fasting food” rather than “vegan food”, and then stating that you also don’t eat honey or “seafood”.

Whereas nistisimo is the magic word for vegan fasting food in Greece, in Serbia the word to remember is “posna”. Actually, word endings change a lot in Serbian, so you might also see fasting dishes labeled as “posno” or “posni”.

In any case, here are 10 posna (or is it posni?) dishes that you definitely don’t want to miss when you’re in Serbia, especially if you’re there during Lent or another Serbian Orthodox fasting period.

This spread made from roasted red bell peppers is popular throughout the Balkans and is sometimes referred to as “Serbian vegetable caviar”. The original ajvar is made with just four ingredients: roasted red peppers, oil, vinegar and salt. Sometimes eggplant, garlic and/or chili peppers are also added.

It can be eaten as a spread on bread or as a side dish. And, although this is not so traditional, I’ve even used it as a pasta sauce!

The custom is for families to prepare a big batch of ajvar in mid-autumn, which is then canned and eaten throughout the winter. Nowadays, you can find commercial varieties in any supermarket or local shop.

This baked bean dish is a staple in Serbian as well as Bosnian and Macedonian cuisine. Usually thought of as a winter dish, this casserole of caramelized onions and white beans is classic Serbian comfort food.

It can be served hot, cold or at room temperature, and, depending on the amount of water added, the consistency ranges from almost totally dry to a very thick sauce. It’s typically served with warm, crusty bread for mopping up.

The main ingredients of this thick stew, also known as sataraš, are bell peppers, tomatoes and onions. It’s popular not just in Serbia but also in other countries of Central Europe, particularly Hungary. In fact, the Serbian name sataraš comes from the Hungarian szataras.

It’s typically served with rice, cheese and homemade bread, but it’s easy to ask for the cheese to be left off. And, if it’s being offered as a fasting dish, it won’t be served with cheese anyway.

This one takes me back to the southern homestyle cooking of Alabama, where I grew up. Who knew southern US cuisine would have something in common with the traditional fasting foods of Serbia?

Proja is a cornbread that can come in various shapes and sizes. Sometimes it’s baked in individual muffin tins, and other times a big batch is baked as a single sheet and then sliced. It’s a common everyday meal in Serbia and is often served with sauerkraut (kiseli kupus in Serbian).

Cheese is sometimes mixed in to the cornbread batter, but if it’s the fasting version (posna proja) that won’t be the case. Just don’t confuse proja with projara, which is a fancier, non-vegan version that contains eggs and yoghurt.

This oven-baked vegetable stew is similar to the ratatouille eaten in southern France or the briám that’s popular in Greece. Just as the English word “casserole” can refer to a type of cooking vessel or the food cooked in that vessel, the name džuveč (also written as “đuveč”) refers to the earthenware pot in which the dish is traditionally prepared.

Džuveč does sometimes contain meat, but there are various fasting versions that feature vegetables such as string beans or leeks instead. The dish is also popular in Turkey, where the vegetable-only version is called türlü güveç.

Sarma is a common dish found throughout the former Ottoman Empire but is especially popular in the Balkans. To prepare sarma, sour cabbage leaves, or sometimes other green leafy vegetables such as chard or grape vine leaves, are rolled around a filling.

Typically, that filling contains rice and various meats, but the fasting (posna) version of sarma is filled with rice and walnuts instead. Sarma is often served on a bed of sauerkraut and covered in a light tomato sauce.

This simple, fresh salad commonly features as a side dish at Serbian meals, especially in the summer months. It’s made with fresh chopped tomatoes, green peppers, cucumbers and onions that are tossed with a liberal helping of vinaigrette dressing of oil, vinegar and dried herbs.

The salad is sometimes also seasoned with a type of hot pepper known as feferon, so if you don’t like your salads spicy be sure to ask for the feferon to be left off.

This flaky pastry is a favorite breakfast item in Serbia, and it’s also popular among young Serbs in the wee hours of the morning after a long night of partying.

While meet and cheese are the most common fillings, there are also fasting varieties (posni burek) that are completely vegan. These may be filled with mushrooms, potatoes, or even apples or sour cherries. Alternatively, the prazan or empty burek with no filling is also a vegan option.

Burek can come in various shapes and sizes, from the long, cigar-shaped ones in the picture above to the round burek that was first developed in the town of Niš, where a burek festival and competition called the Buregdžijada is held each year.

This thick and creamy mushroom soup often appears on menus in traditional Serbian cafés, known as cafanas. It’s hearty and warming, and, unlike some other fasting dishes, it’s easily found year-round in Serbia, even outside of fasting periods.

The rustic bread known as pogača comes in large, round loaves with a soft crust and is a favorite in Serbia and throughout the Balkans. Unfortunately, the traditional recipe is nowhere close to being vegan, as it calls for milk, butter, eggs, AND sour cream. Eeek!

You might be wondering why all those bodily secretions are needed just to make bread? Well, they aren’t, of course, and thankfully there’s also a fasting version of this bread known as posna pogača. This one is much simpler, as it’s made with just water, yeast, salt, sugar and oil.

So, grab a loaf of posna pogača and smear it with ajvar, or use it to scoop up those last few beans in a big dish of prebranac. The Serbian Orthodox fasting time is more like feasting time for vegans!

Even if you don't see any of these dishes on the menu, you can always ask for "posna hrana" (fasting food).  This is a phrase that staff at any restaurant in the whole country will understand, and they will almost always be happy to prepare something for you that's not on the menu.

When it comes to vegan foods that are part of the Serbian Orthodox fasting tradition, these 10 are really just the tip of the iceberg. On my most recent trip to Serbia, I bought a whole cookbook full of fasting recipes.

OK, so I can't actually read it because it's in Serbian, but I can tell by flipping through it that there are dozens if not hundreds more vegan dishes in traditional Serbian cuisine. If you've discovered others in your travels, let me know in the comments below (I'm looking at you, Caitlin and Sam)!