In my last post I gave you a little taster of Meteora, whose name literally means “suspended in the air”. This is a pretty accurate description of the monasteries that were built here on the tops of towering limestone rock formations, starting in the 14th century, as a refuge from the invading Turks. At that time, the only way to access the monasteries was by climbing a series of rickety ladders or being hoisted up in a rope basket. Stairways have been built in modern times, opening the place up to a steady stream of visitors. 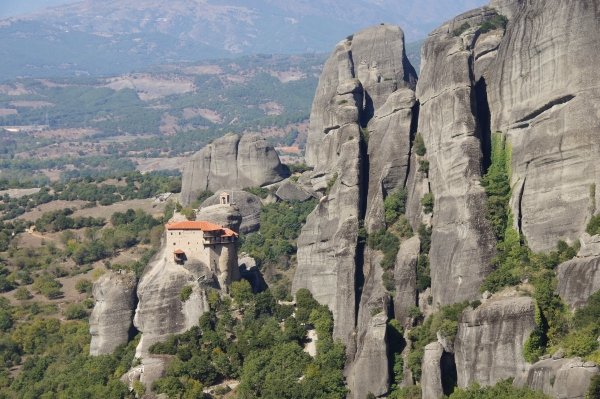 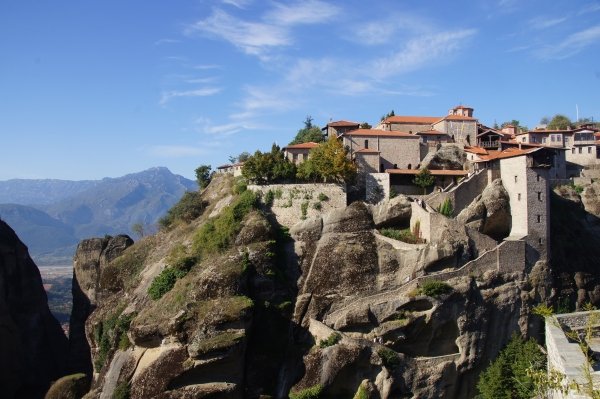 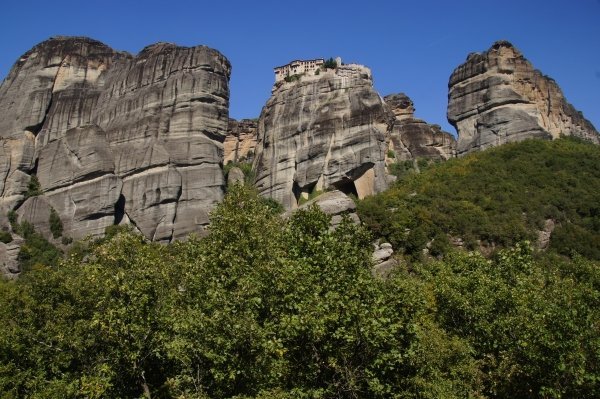 We first arrived in Kalambaka, the main town in the Meteora region, and chose to stop and eat there at a taverna called Paramithi before walking the final two kilometres to Kastraki, a smaller, more peaceful village closer to the cliffs and monasteries where we would look for accommodation. 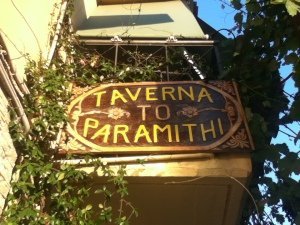 The owner/server at Paramithi was very friendly, and the menu included a large selection of vegan dishes in the mezedhes and salads sections. The combinations seemed almost endless. Should I get fried zucchini with a portion of skordalia to dip them in? Or how about gigantes complemented by a potato salad? beetroot salad? arugula salad? I decided I wanted something light and not too filling, and after walking in the hot sun with our backpacks, some cool, juicy tomatoes seemed like just the thing. So I settled on the tomato salad (which also included cucumber and red onion) and a serving of grilled mushrooms. 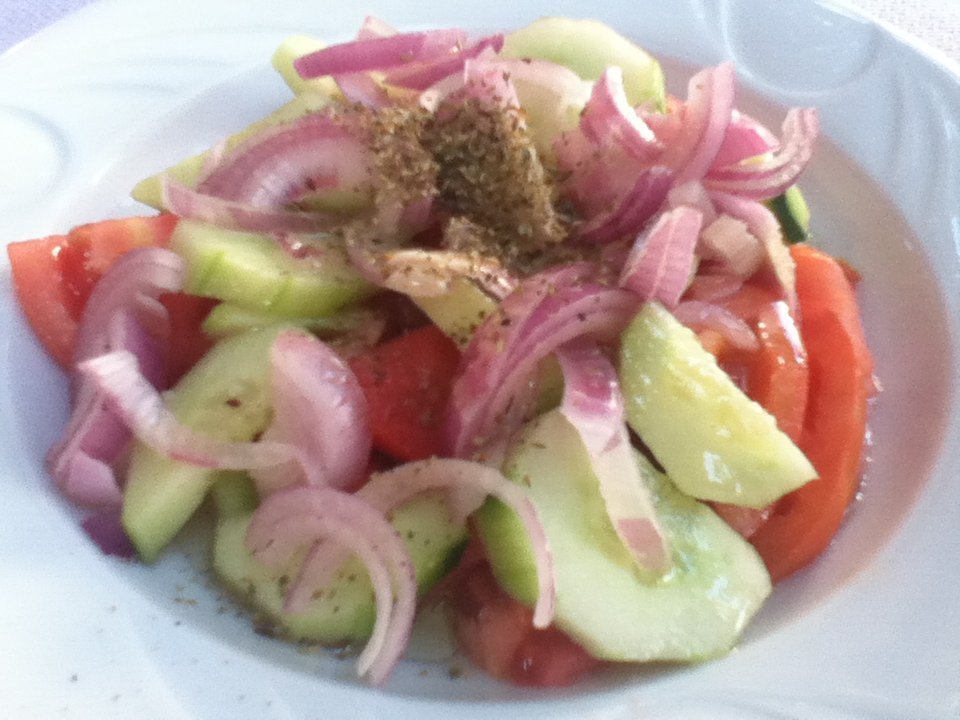 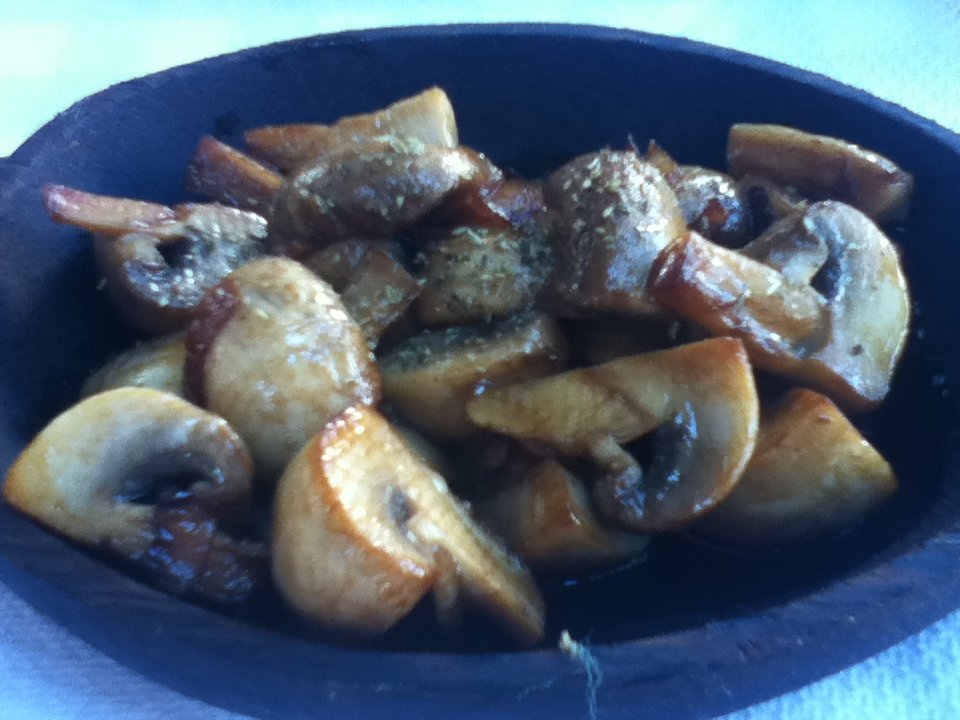 Both were delicious and just what I was looking for. My only regret was not having more room in my belly to try all the other dishes on offer.

For dinner we tried another tavern called Paradisos, which was in Kastraki. I do recommend staying in Kastraki rather than Kalambaka if you can. It’s much more peaceful and has amazing views of the cliffs. Be sure to get a room that has a balcony – most do. This was the view from ours of Kastraki and the surrounding rock formations. 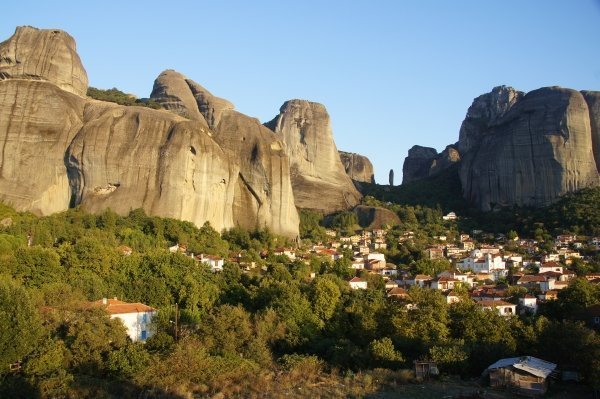 Interestingly, Taverna Paradisos actually had a separate nistisimo section on the menu, though many of the dishes listed there did contain seafood (aquatic animals that do not have backbones or red blood can be eaten on Greek orthodox fasting days). As an appetizer I ordered the melitzanosalata, which was unlike any other version I had seen before. In addition to the namesake eggplant, this one was also made with red peppers, walnuts, garlic and other seasonings, and this was evident in the colour, texture and flavour of the dish, though the dominant flavour was still what Nick refers to as the “smokiness” of melitzanosalata. I’m not sure that “smoky” exactly captures it, but I do know what he means, and I can’t really think of a better word myself. Nick, by the way, has decided he is not a fan of this dish or its smoky flavour. It’s certainly completely different from the sweet, melty goodness of the eggplant found in other Greek dishes like imam and briam. If you like babaghanoush then you will probably like melitzanosalata, which is quite similar. If not, then stick to the eggplant dishes that are baked in the oven, as that really brings out their sweetness. 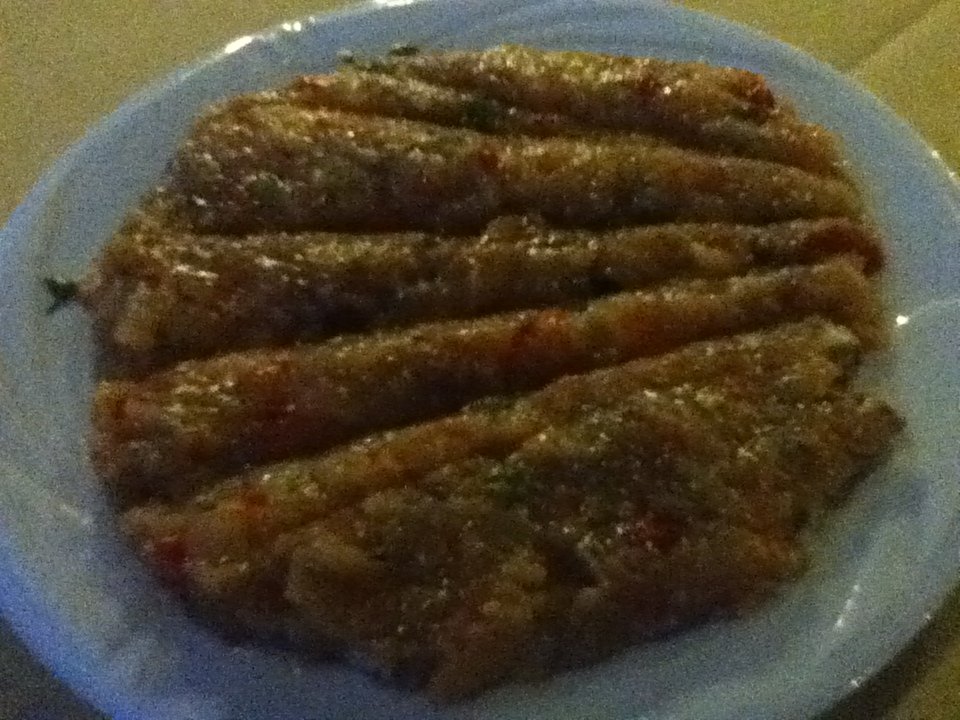 As my main I ordered something from the nistisimo section that I had never seen before; it was a dish translated simply as “beans peas”. This turned out to be a mix of kidney beans, cannellini beans and black-eyed peas, cooked with red peppers and herbs and spices and served cold, with lots of olive oil. I quite enjoyed this dish and would definitely order it again, though as bean dishes go I generally prefer gigantes (lima beans), which are served hot in tomato and onion sauce. 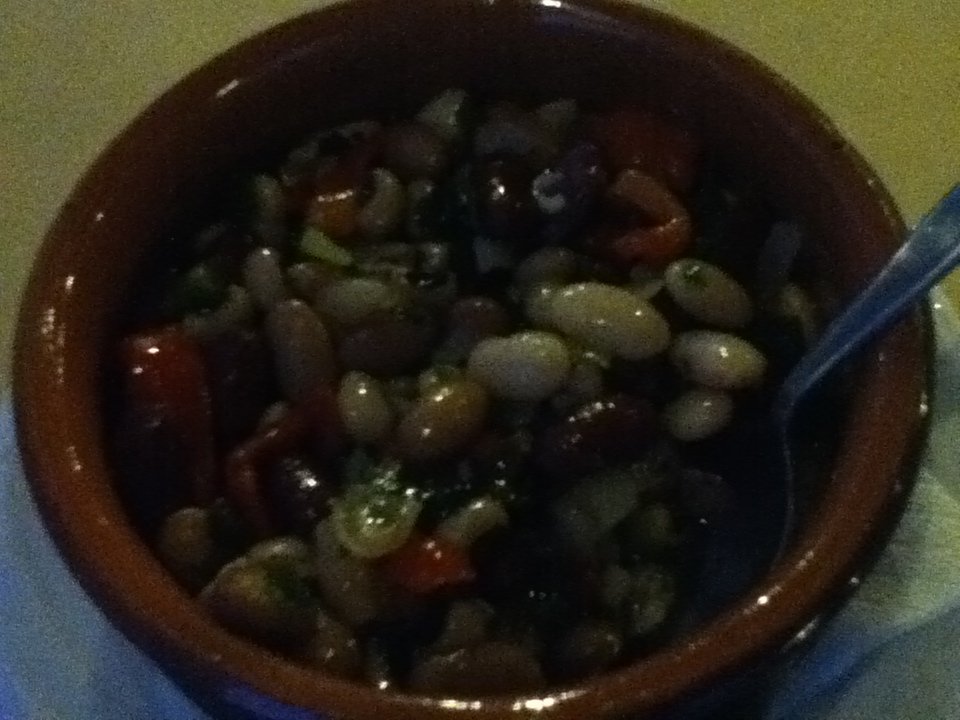 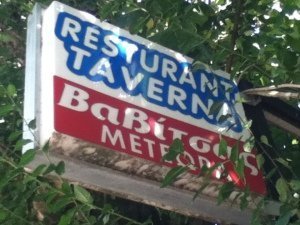 After a full morning of visiting monasteries, the next day for lunch we ended up at a taverna in Kastraki called Vavitsas. To be honest, this is probably not a great choice for vegans, as it focuses heavily on grilled meat and has relatively few vegan options by Greek standards. That said, there are certainly enough dishes to cobble together at least one meal. I went with the lettuce salad, which normally comes with just lettuce and onion, but the waiter offered to throw in some tomatoes as well. 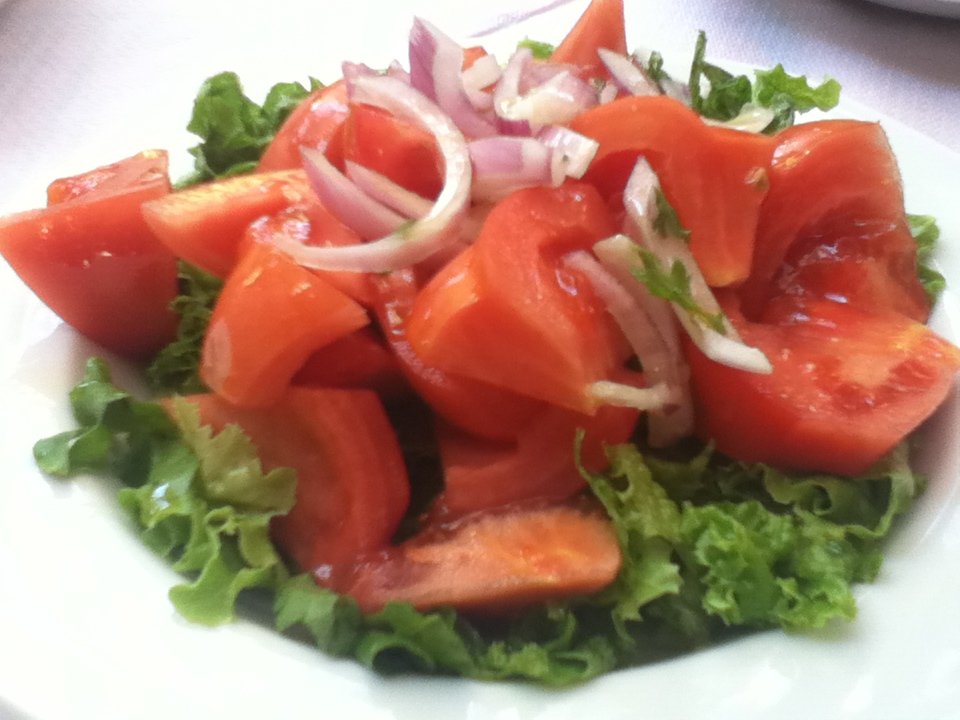 This was accompanied by another one of those Greek salads named after just one ingredient – beetroot. 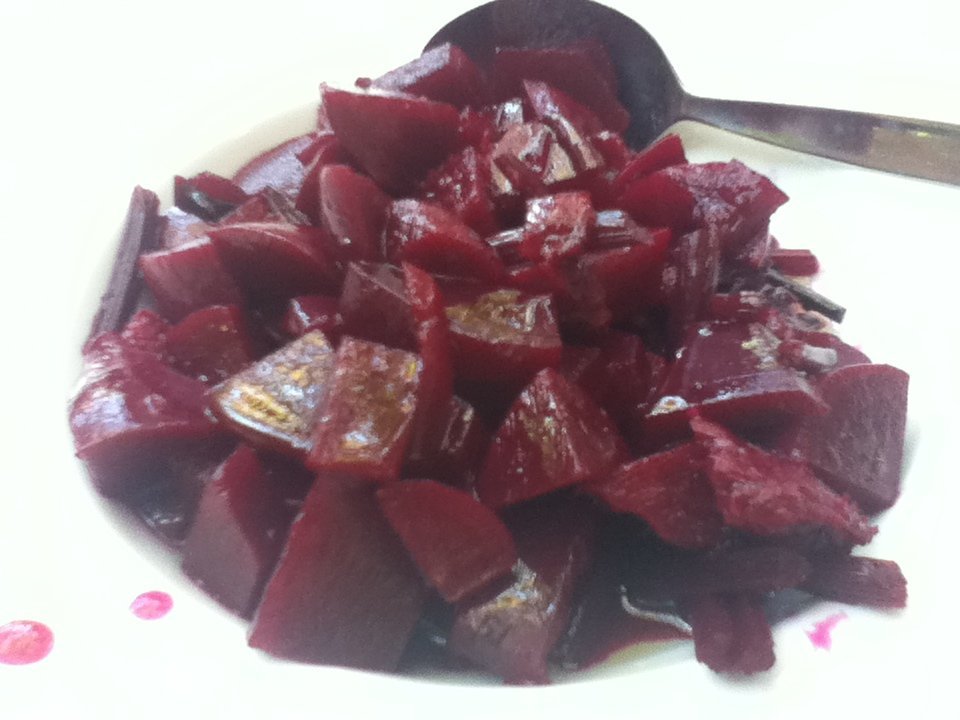 Now, until that day I’d always had a strong aversion to beetroot. I would get annoyed whenever I ordered a salad and it turned out to have beetroot in it. You can’t just pick it out, because both the taste and colour have a way of seeping into everything around it, turning the whole plate bright purple. In recent months, however, I had been making an effort to expand my palate and approach with a more open mind the few veggies that I’d always thought I disliked. I had made great strides with bell peppers, and had even developed a tolerance of celery, so beetroot was pretty much the final frontier.

I am happy to announce that Greece has revealed to me the secret to making beetroot edible downright tasty – GARLIC! Lots and lots of garlic. The dish still had that beetroot taste, but this was almost completely overpowered by a very strong garlic flavour. I happen to love garlic, so this worked out swimmingly. What’s puzzling, though, is that I couldn’t see any pieces of garlic anywhere in the dish; it was as if the beetroot had somehow been suffused with the garlic without leaving any trace of it. I later did a bit of research and discovered that in Greece beetroot is quite commonly paired with skordalia, a potato-based dip that is also heavily flavoured with garlic. Vavitsas did not serve skordalia, but even so I still finished the whole plate of beetroot with no problem, which was a real milestone for me!

That afternoon we had a few things to take care of back in Kalambaka (bus tickets, ATM run, etc.), so we decided to combine these errands with a return visit to Taverna Paramithi. The owner recognized us right away and made us feel like regulars returning to our local hangout. We decided to share an assortment of appetizers since there were so many to choose from. And they were all delicious! The portions were fairly small, but the prices were also correspondingly low. I actually preferred it this way, because it meant that I could try lots of different dishes instead of having larger portions of just a couple. 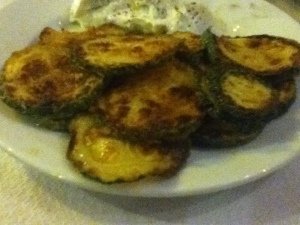 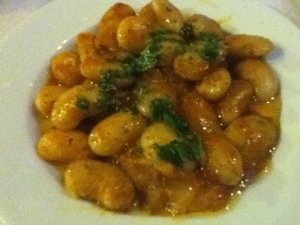 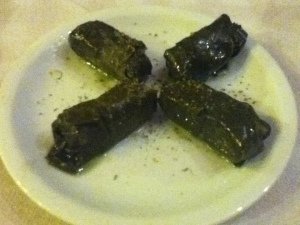 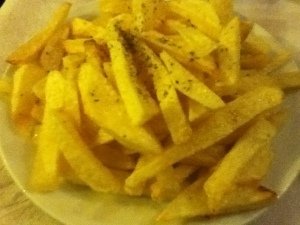 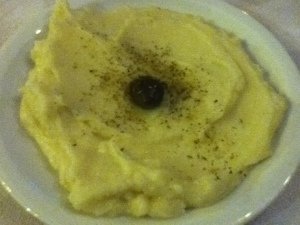 Our meal consisted of fried zucchini, gigantes (lima beans), dolmadakia (stuffed vine leaves) and homemade French fries. Oh, and a plate of skordalia (garlic potato dip), which I used as a dipping sauce for the zucchini and the fries. Fried strips of potato dipped in more potato – who doesn’t love that? The dolmadakia were the best I’d had in all of Greece, sooo soft and creamy. Many of these dishes do come with a dollop of tzatziki on the side, so, unless you’re sharing with non-vegans, be sure to specify that you want it without. All in all, this was a fabulous meal and one of the culinary highlights of our trip.

So we’ve got just one more destination left in Greece. Get your questions ready for the oracle… in the next post we’ll be heading to the panhellenic sanctuary in Delphi! In my opinion, this is one of the best historic sights in Greece, along with the island of Delos near Mykonos. 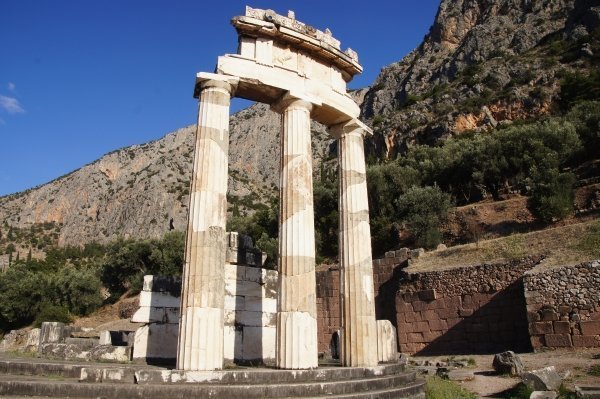