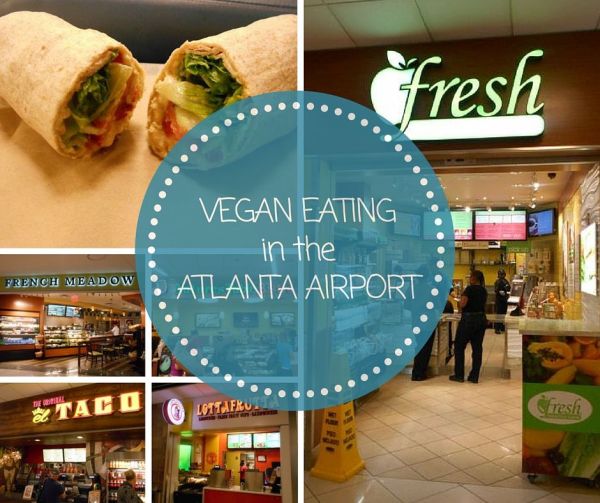 With Christmas just around the corner, I know many of you will soon be travelling, so I thought it would be a great time for another edition of the Sky High Vegan series. This time, we'll be taking a vegan tour of the Hartsfield-Jackson International Airport in Atlanta, Georgia! Did you know that Atlanta has held the title of the world's busiest airport every year since 2000?!

Which means there will be quite a few hungry herbivores passing through here in the next couple of weeks. As you might expect, this place is huge and is divided into no less than seven concourses, which are connected by a free shuttle train. Luckily, all the concourses have vegan and veg-friendly options.

Confusingly, the first concourse is not Concourse A, but Concourse T. Why? I have no idea. Vegan options are actually somewhat limited in this particular section, but don't worry, it only gets better from here. If you're flying in or out of Concourse T and aren't tempted by the two options listed below, you might try to give yourself a few extra minutes to head over to Concourse A for a bite to eat. 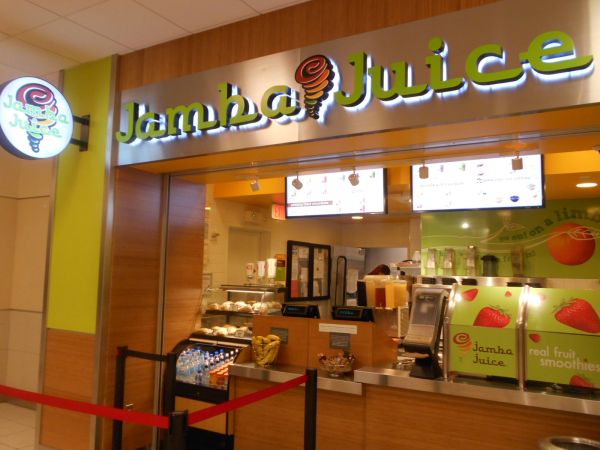 Vegan options include the açaí trio or açaí bliss energy bowls (both made with soy milk) and the steel-cut oatmeal. Sadly, the three new vegan smoothies that were recently released at other locations are not available here. However, the Protein Berry Workout Smoothie and the Fit 'n' Fruitful Peach Mango Smoothie are both vegan. 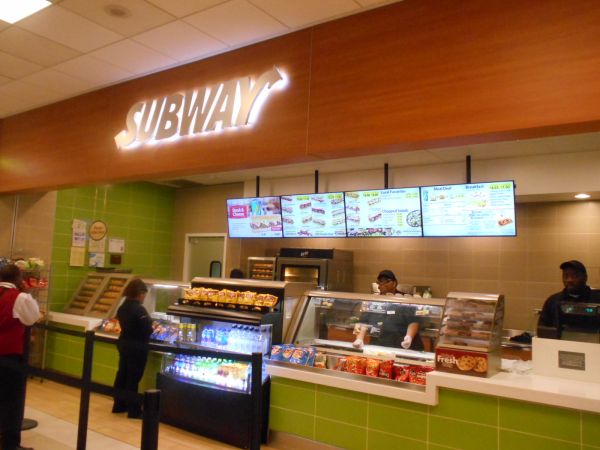 Nothing too exciting here, but you can always rely on a Veggie Delite sub or salad. According to the Subway website, vegan bread options are: 9-grain wheat, hearty Italian, Italian white, roasted garlic, sourdough and the wrap. Vegan sauce options are: buffalo sauce, fat free sweet onion, guacamole, mustard, oil and vinegar, and Subway vinaigrette. 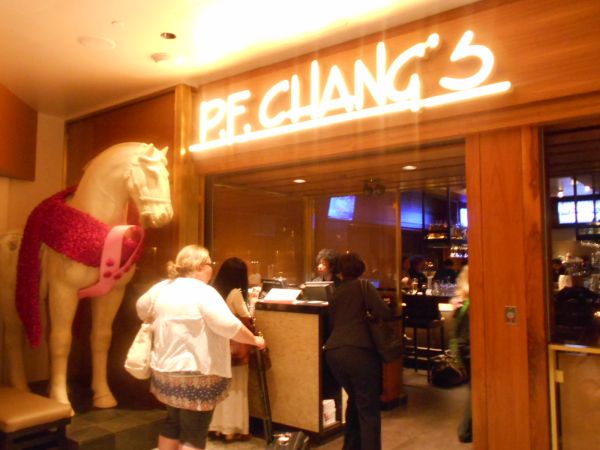 Compared to most other airport eateries, this is a more upscale restaurant serving Chinese food. There are a couple of vegan main dishes, namely the Buddha's Feast and Coconut Curry Vegetables. They also have lots of yummy-sounding starters and side dishes, like Orange Ginger Edamame, Spinach with Garlic, and Vegetarian Lettuce Wraps. 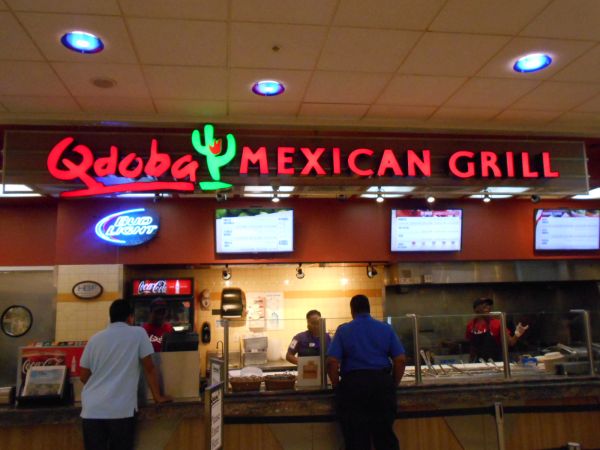 This express location does not offer the full Qdoba menu. Based on information gathered by other vegan bloggers, such as veganmasterlist, the vegan options here seem to consist of the vegetarian burrito (without the sour cream and cheese) and the tortilla chips with salsa and/or guacamole. 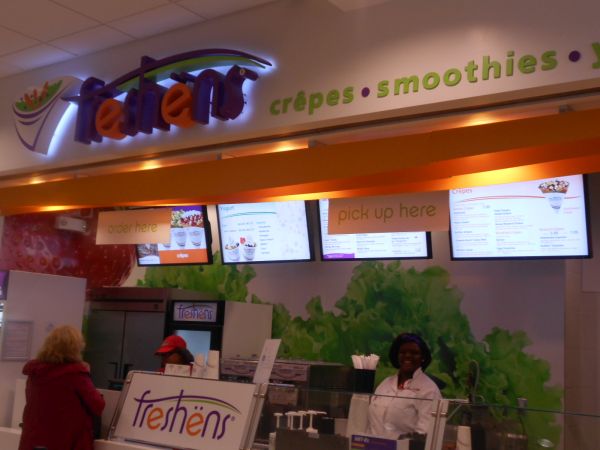 There are several Freshens locations in the airport, but all of them seem to offer only smoothies, crêpes and yogurt. Most of the smoothies are made with sorbet and thus should be vegan. 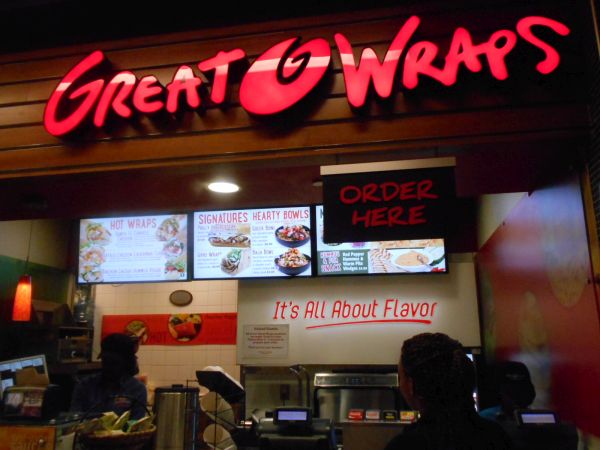 Here you can get a hummus veggie wrap. 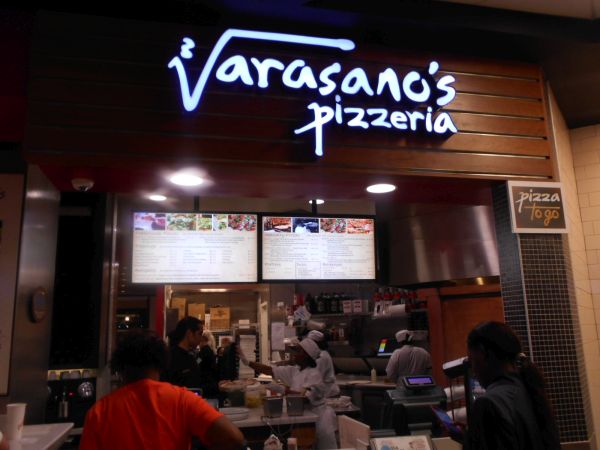 The 10-inch thin crust pizzas here are made to order and thus can be made without cheese on request.

Fresh to Order (B Centrepoint) 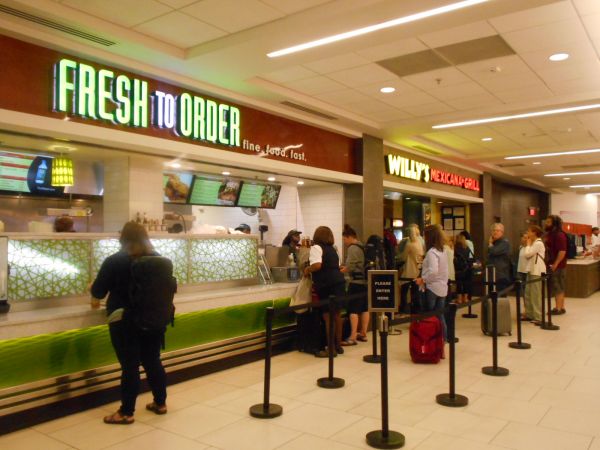 The lentil soup is about the only thing on the menu that is vegan as is. BUT, on their website they provide a vegan menu listing all the items that can be veganized and the substitutions needed to make them vegan. There are actually quite a few options, including four different sandwiches (on ciabatta bread), three salads and several side dishes. It's all a bit too complex to list here, so check out the menu for yourself. 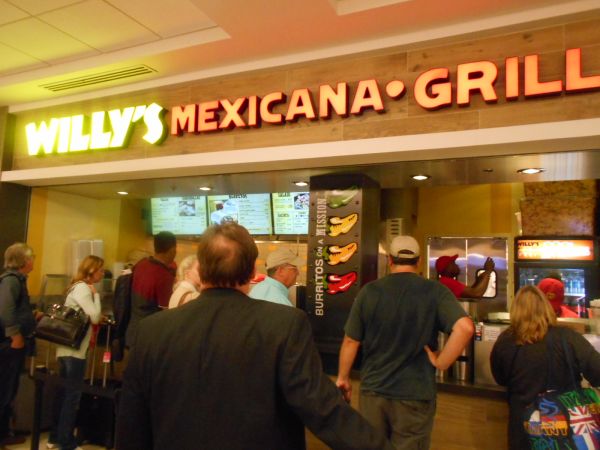 This Mexican take-away has made-to-order tacos, burritos and burrito bowls, all of which come in veggie or tofu versions (you just need to ask for no cheese). You could also get the tortilla chips with salsa and/or guacamole, and the beans and rice here is also vegan. 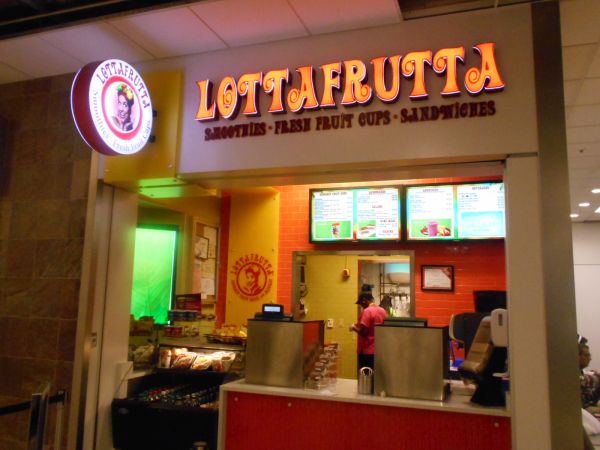 This “gourmet fruit house and market” offers several varieties of fresh fruit cups, all of which are vegan except the dolce vita. They also have fresh juices, and the salads are customizable, so you could order one with no animal products. You might also try ordering the “just veggin'” grilled sandwich without the havarti cheese, which would leave you with avocado, tomato, cucumber and sprouts.

See description under Concourse A above. 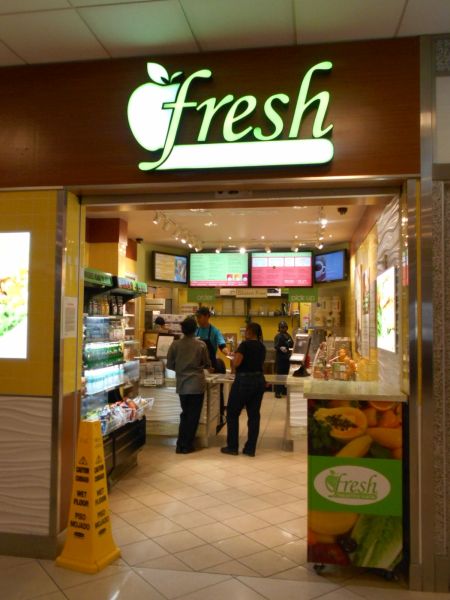 Sadly, the Gardein chick'n that's available at other locations is not offered here. Nevertheless, several menu items are vegetarian and can be made to order without cheese as a wrap, panini or salad. Some smoothies are already vegan, such as the Kale Pineapple and the Jolly Green Kiwi, and others can be made with soy milk on request. Overall, this place lives up to its name and has lots of healthy options. Pictured here is the hummus wrap, which was quite tasty! 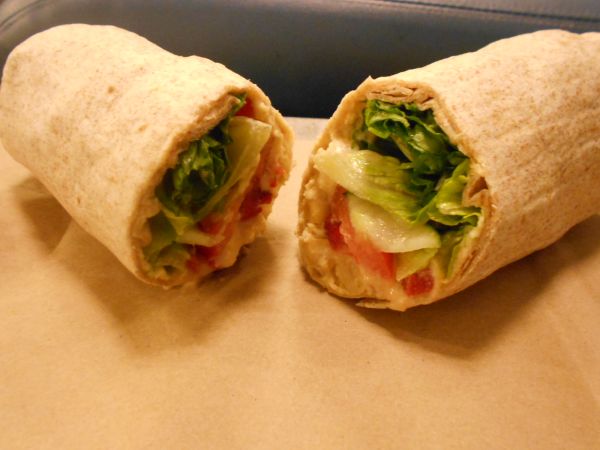 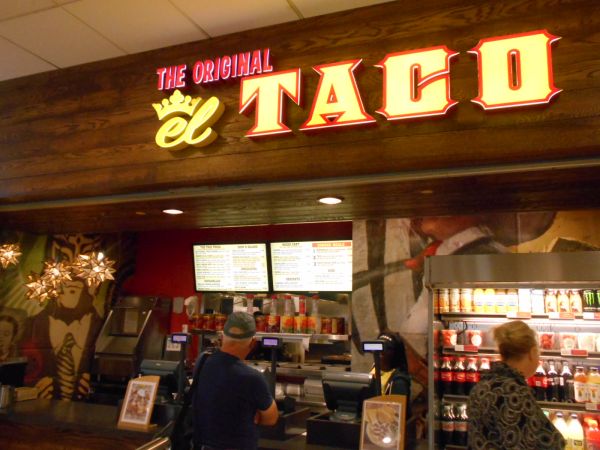 There's a taco here called the Vegan Mercado! So yeah, get that. The rice and beans are also vegan, but the tortilla soup is made with chicken broth. 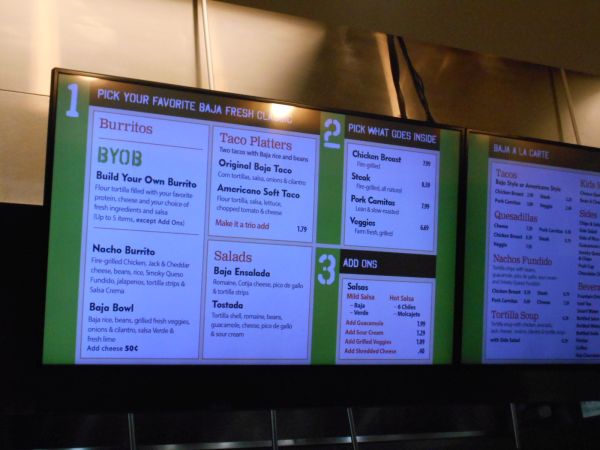 According to the most recent information I found, the tortillas, rice and beans at Baja Fresh are all vegan. This opens up a number of options here, including the burritos, tacos, baja bowl, or tostada with no cheese or sour cream. Obviously, in step 2 where you “pick what goes inside” you would choose veggies. 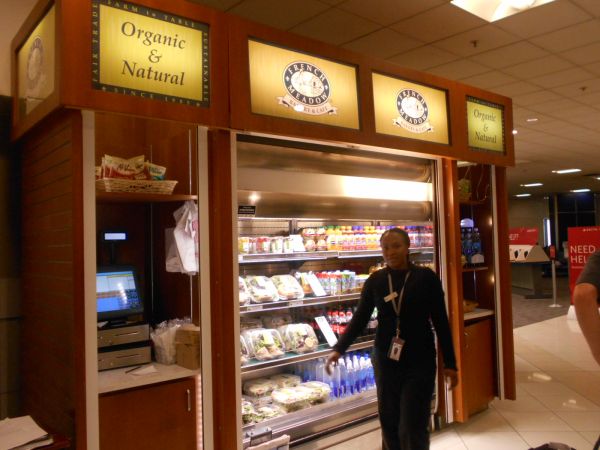 This is a small kiosk version of the very vegan-friendly restaurant by the same name located in Concourse F. You should be able to find a vegan Mediterranean Wrap or Spa Salad here, and maybe a fruit cup or some hummus and pretzels. 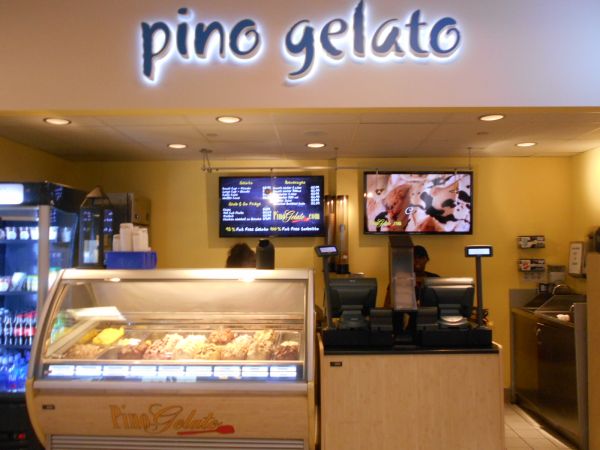 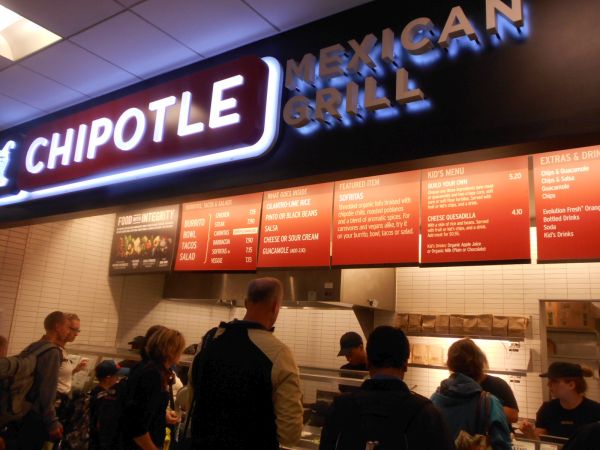 This chain is a solid option that most vegans in the States will be familiar with. Vegan items include the burritos, tacos (soft or crispy), or bowls with any of these ingredients: sofritas, beans (pinto or black), rice (white or brown), fajita vegetables, guacamole, chips and salsa. I was happy to see the Sofritas (shredded tofu) being advertised as a featured item that is “suitable for carnivores and vegans alike”. 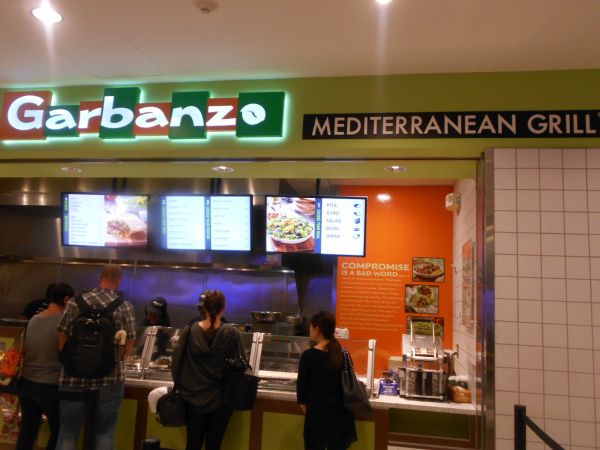 All menu items can be ordered in the form of a gyro, plate salad, pita or wrap. Once you choose your format, you then have to choose a “protein”. Ugh, I hate it when people misuse that word. The options in this category are mostly dead animals, but apparently falafel and portobello mushrooms are also “proteins”. Whatever. The third step is to choose your side dishes, all of which appear to be vegan. So if you can look past their misunderstanding of macronutrients, there are actually plenty of good options here, earning it a place in the “Top Picks” section. 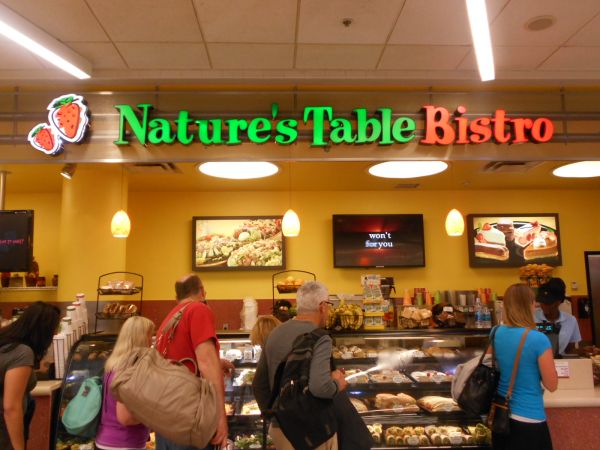 Other vegan blogs, such as veganmasterlist, have confirmed that the tortillas and chips here are vegan. This should mean that the vegan options at this express location are the vegetarian burrito (without the sour cream and cheese), and the tortilla chips with salsa and/or guacamole. 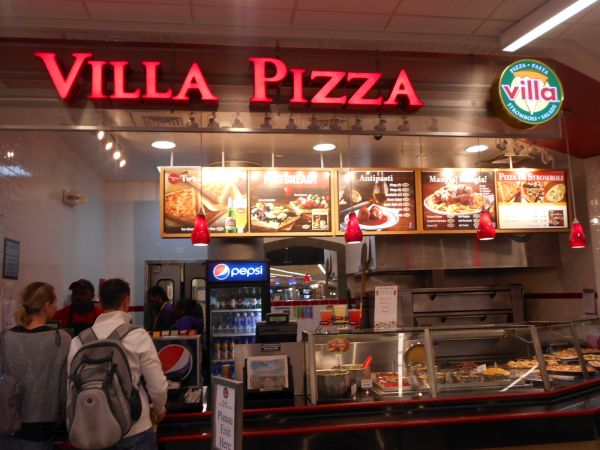 Italian fast food is what's on offer here. The spaghetti marinara should be vegan, and you can add veggies or a salad for some extra nutrition. Likely vegan options among the antipasti (starters) are green salad, veggies and pasta. 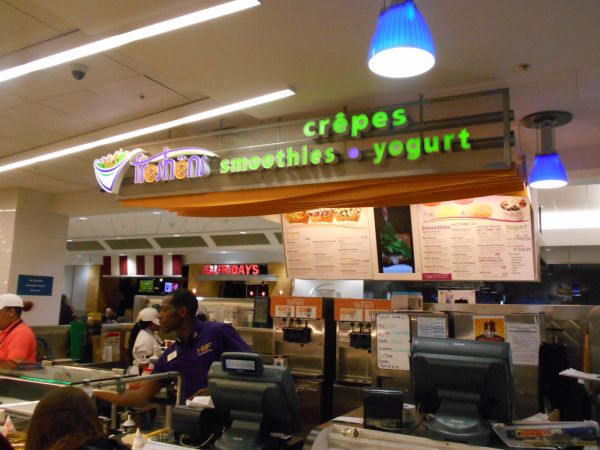 See description under Concourse A above. 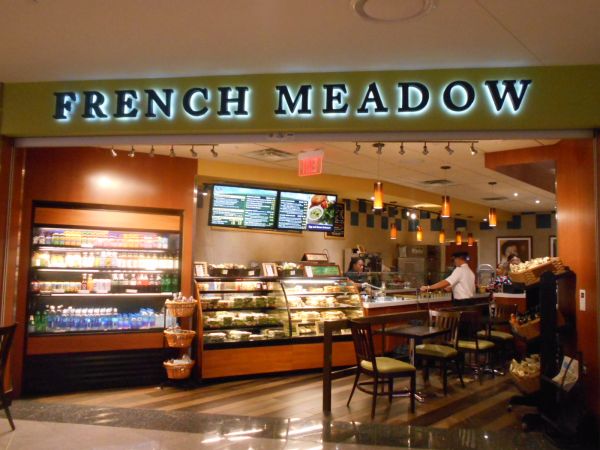 In my pre-trip research I hadn't given this café much thought. French cuisine, after all, is not particularly vegan-friendly. Luckily, though, I poked my head in anyway and saw that the word "vegan" appears on the menu not once, not twice, but THREE times! The items specifically advertised as vegan are the black bean chili, the Mediterranean sprouted wrap and the spa salad. They also run a small kiosk in Concourse C that offers fruit cups, hummus and pretzels, etc.

See description under Concourse C above. 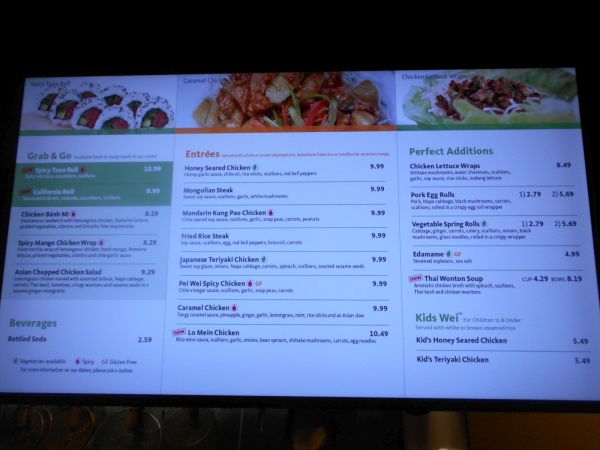 The menu states that vegetarian versions of the Honey Seared Chicken and the Japanese Terikyaki Chicken are available. I asked about this, and apparently they replace the chicken with snap peas, broccoli and carrots in the vegetarian version, though obviously the Honey Seared Chicken would still have honey in it. Vegetable spring rolls and edamame are also available. 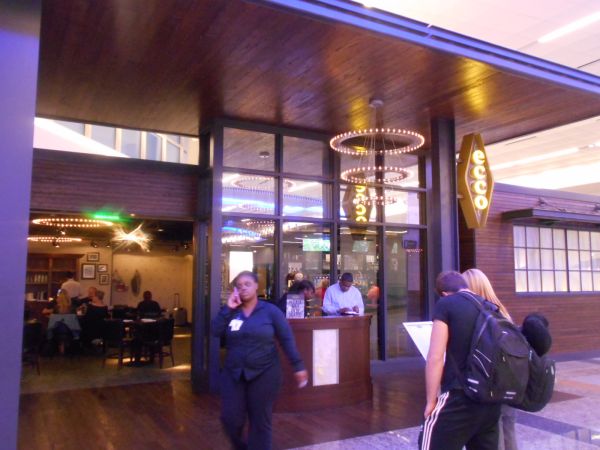 This is an upscale European/Mediterranean restaurant. If you want to sit and relax in a nice atmosphere while you enjoy a meal then you could order the spaghetti with tomatoes, olives and capers (make sure they don't sprinkle cheese on top). Or you could try ordering the panini with roasted squash, peppers and eggplant (hold the yoghurt and Grana Padano cheese). They also have some nice-sounding side dishes, like salt roasted beets, beluga lentils, pickled red onions, grilled radicchio and Calabrian chiles.

This list is not exhaustive, but it should be plenty to get you started. If you discover any more great finds in Atlanta, share them in the comments below! For more information on the eateries listed here, including opening times and phone numbers, check out the Atlanta airport's website.