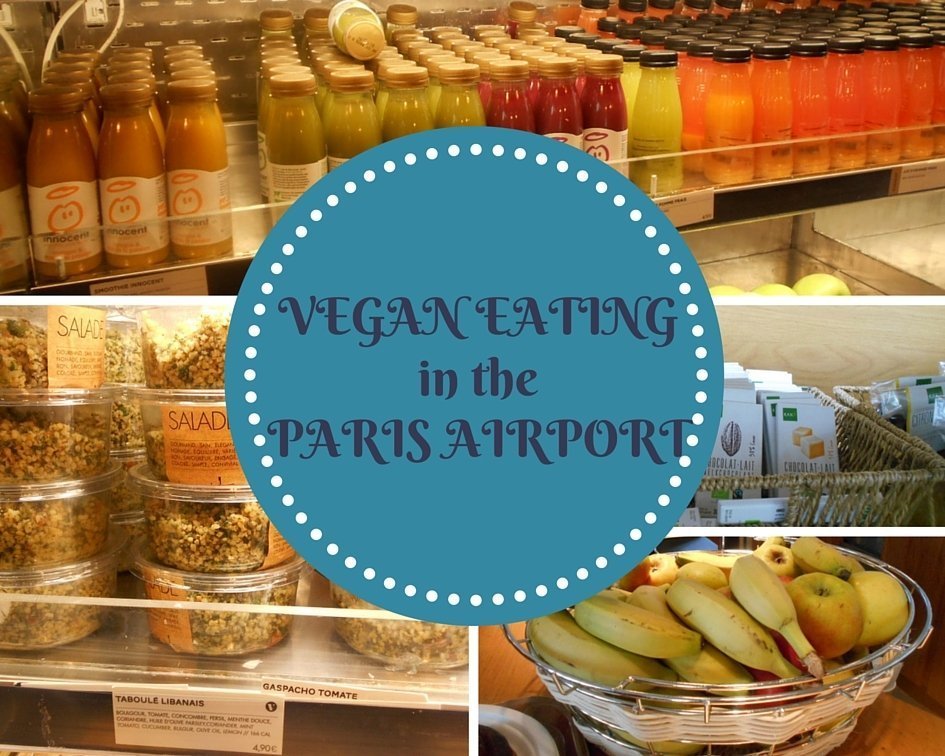 The Charles de Gaulle airport in Paris is not exactly overflowing with vegan dining options. In fact, there seems to be a scarcity of food of any kind; most of the shopping arcades are filled with luxury handbags, perfumes, jewellery, etc. Who needs to eat when you can look thin and fabulous instead!

I do. I need to eat, and when I've just come off an overnight trans-Atlantic flight, complete with swollen ankles, smelly breath and bed hair (despite having not slept in a bed), looking fabulous is the last thing on my mind. 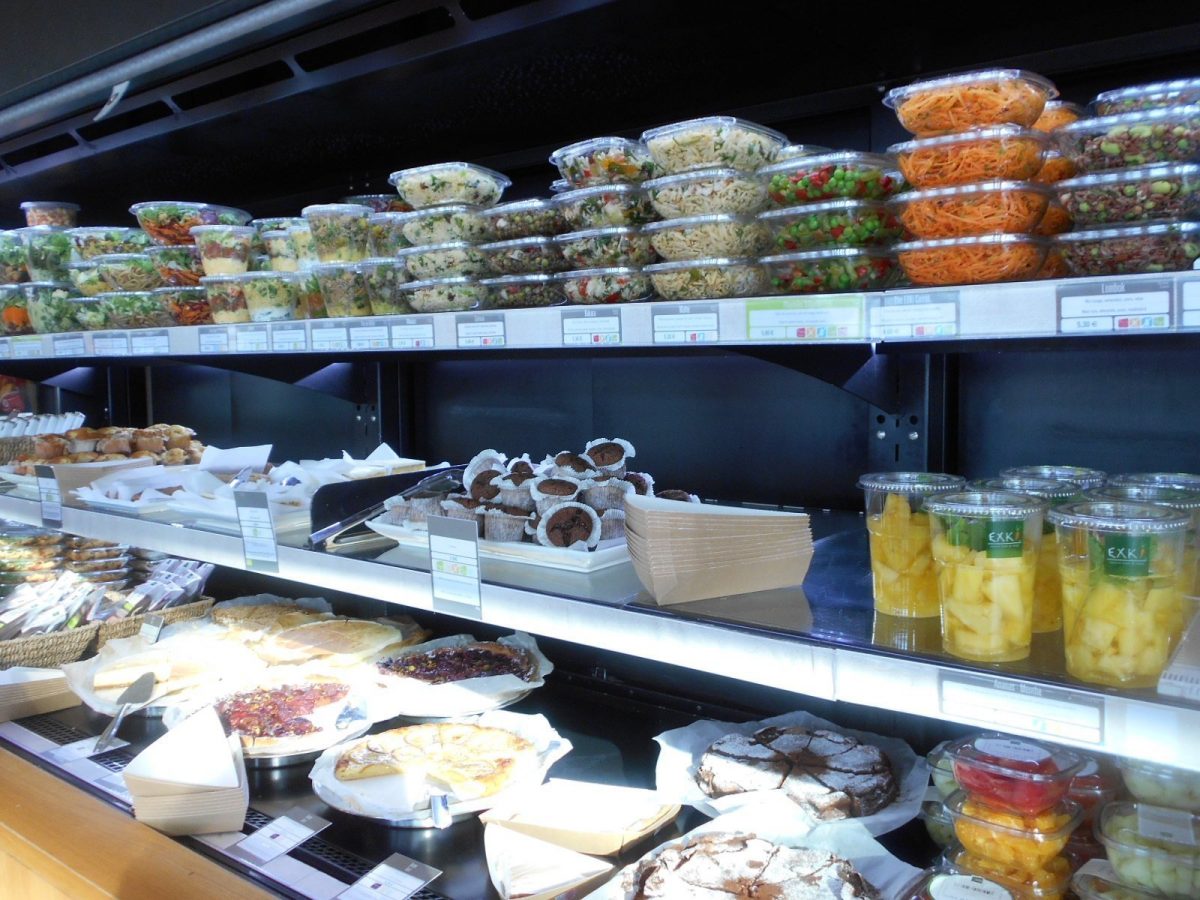 Fortunately, there is one stand-out vegan-friendly option to save the day, and that's Exki. This chain of healthy fast food outlets started out in Belgium, but they've been popping up in a growing number of European cities, and especially in airports, where they offer a welcome respite from the usual airport fare.

There are no fewer than six branches in Charles de Gaulle (and three in Orly, Paris' other airport), so odds are you won't be too far from one no matter which terminal you're flying out of. They are located in terminals S3, S4, 2A, 2D, 2E and 2F.

​I visited the one in Terminal 2E, which is at gate K47. As usual with Exki, the focus is on natural, sustainable, organic foods. 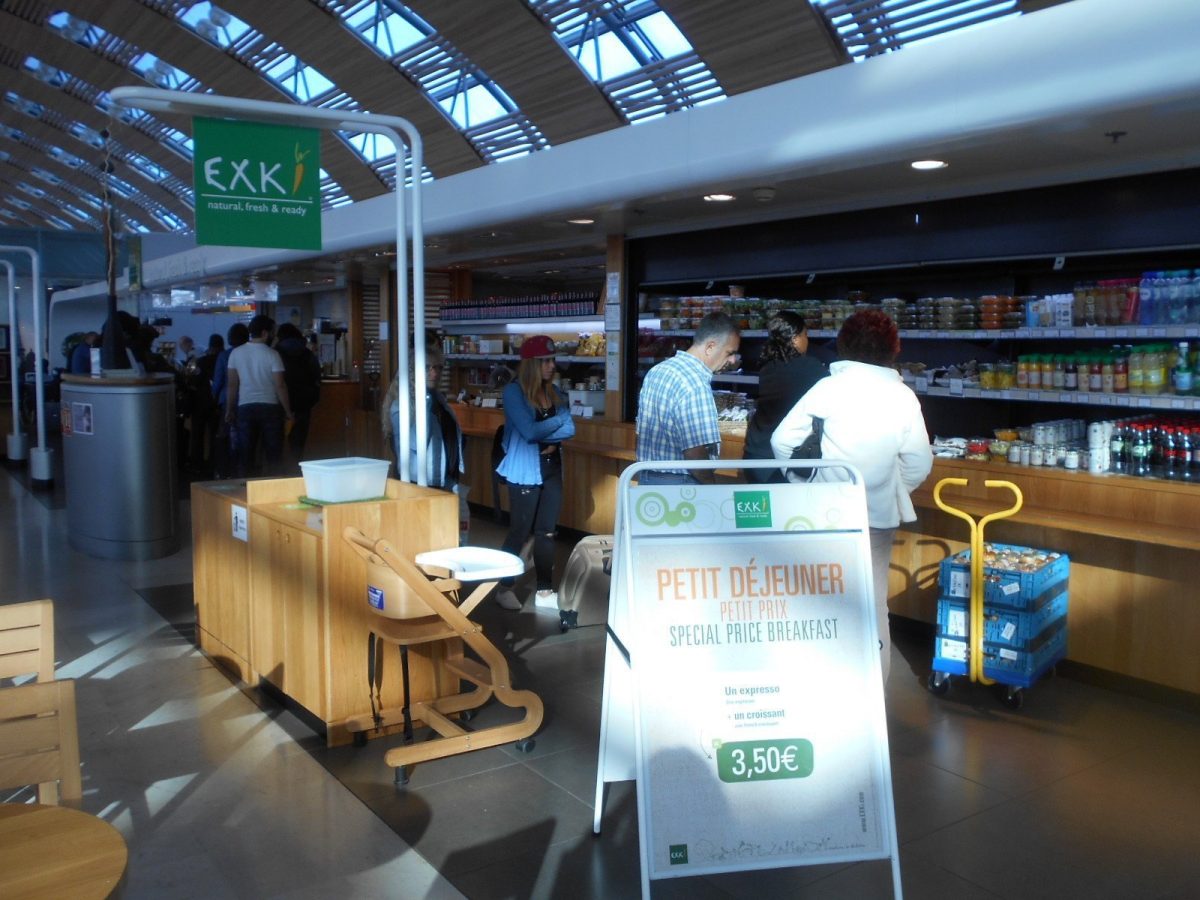 All items are clearly labelled for food allergens and other dietary requirements. I've seen other Exki branches that included a vegan label. While that was not the case here, they do label all vegetarian options, and they also list every ingredient in both French and English, so it's pretty easy to identify the vegan items.

The day I was there, those items included a number of different salads, a couple of soups, and one curry dish (curry dishes are found in the cold section with the salads, but there is a microwave in the seating area where you can heat them up). They also had fresh fruit and some vegan chocolate bars. So yeah, heading here is pretty much a no-brainer.

If for some reason you can't make it to Exki, there are a few other options where you can at least find something edible.

Exki is a vegan-friendly haven for travellers in the Paris airports. 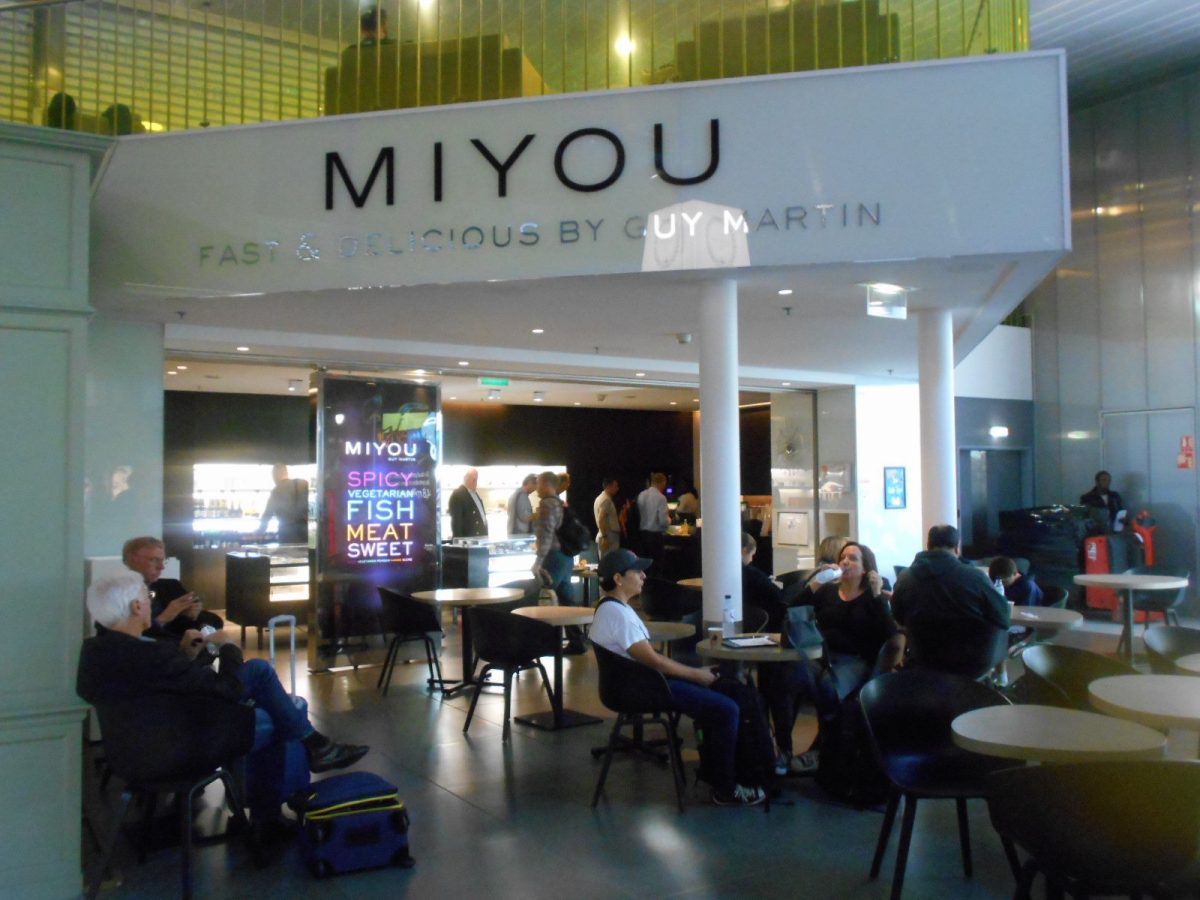 You'll find this chic, Japanese-inspired café near the elevator, below the food court. They offer one vegan salad with tofu, mango and wheat berries, but at nearly 13 euros it's much poorer value than the salads you'll find at Exki. 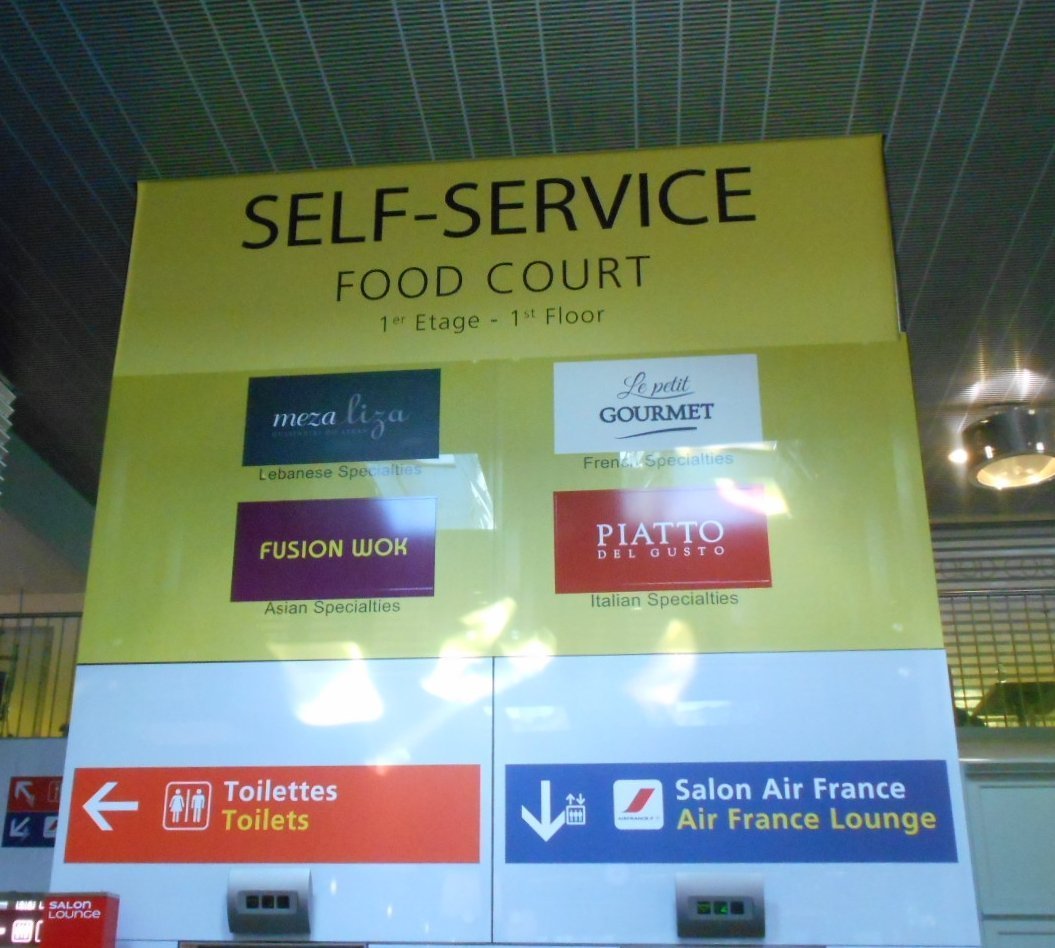 The food court leaves a lot to be desired

Once you've found Miyou, head up to the next floor and you will be at a small food court. It was not yet open when I passed through at 10 a.m., so I don't have any photos to show you, but honestly, there's not much to see.

The most promising options here are the Lebanese place called Meza Liza. They offer a set plate of Lebanese meze, which includes babaghanoush, tabbouleh, hummus and moudardara (lentils and rice with caramelized onions).

Apart from that, you might find a vegan pasta option at Piatto del Gusto or a veggie spring roll at Fusion Wok. 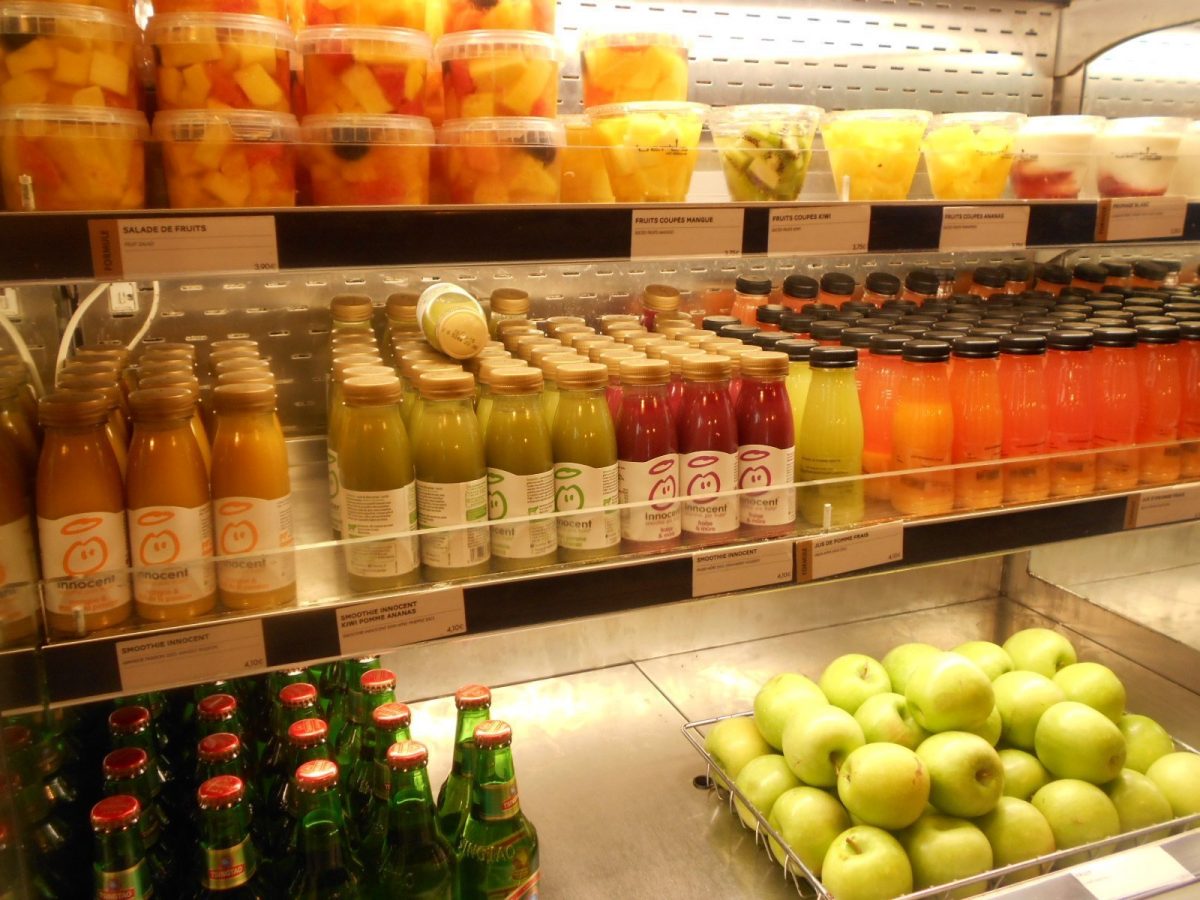 Fruit in a variety of forms at Bert's Café Contemporain

On the lower level below the gates, here I found some fresh fruit, fruit juices, and a tabbouleh salad. There was also a label for a tomato gazpacho, which presumably would have also been vegan, but they seemed to be out of it. 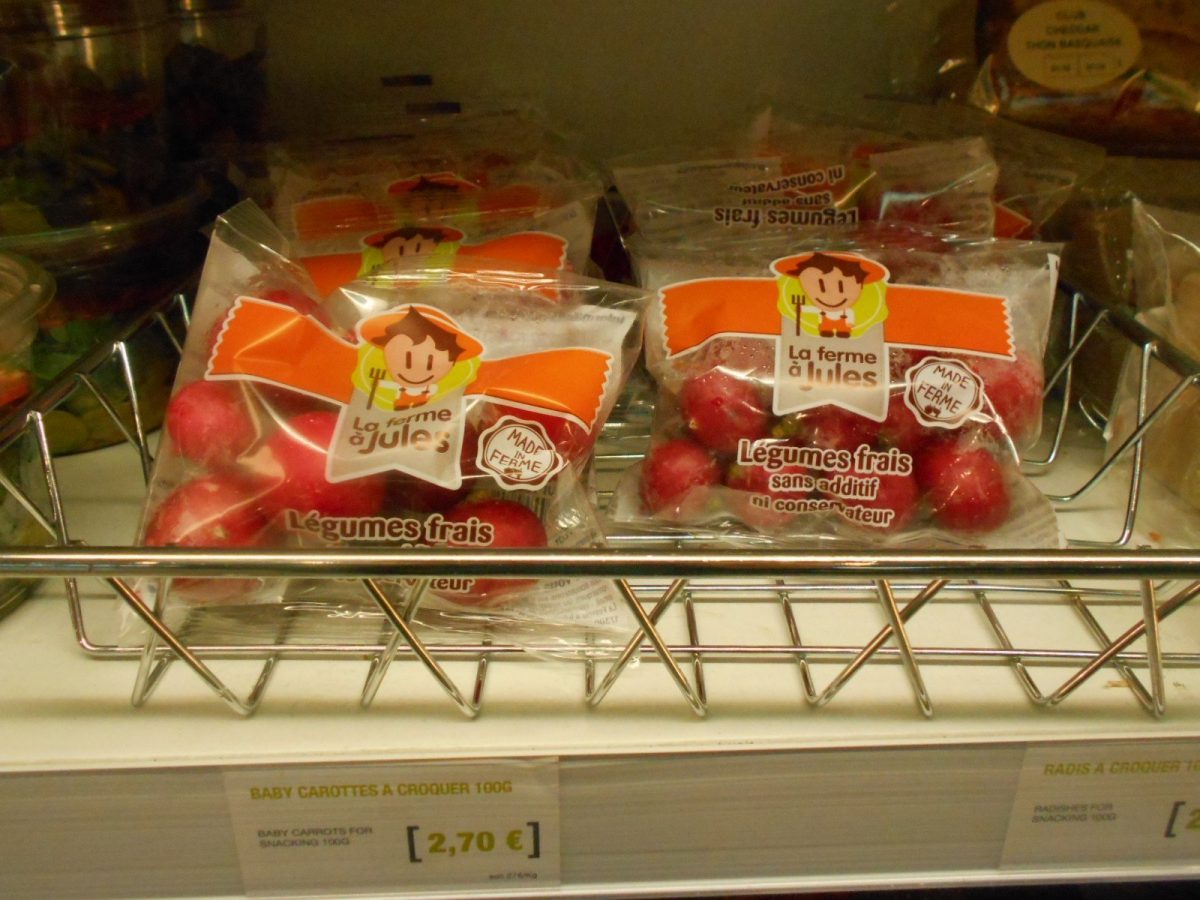 A light snack of radishes, anyone?

There's not much reason to choose this place over Bert's, unless you have a thing for raw radishes. Otherwise, you'll find the same fruit cups here as at Bert's but not much else. However, there is a microwave in the seating area, which could come in handy if you're self-catering while traveling.

This well-known French chain is very meat-focused, but it does have a few tasty-sounding side dishes, like ratatouille and candied vegetables. You could concoct a pretty inexpensive meal by ordering a few of these.

And that's about it. If I haven't made it clear, finding the nearest Exki branch really should be your top priority if you're looking for a meal at Charles de Gaulle. And, if you're on a long-haul flight, be sure to ask for a VGML meal in advance when you make your flight reservation.

While airlines often refer to this as a vegetarian meal, this is in fact the code for a vegan meal, while the code for a lacto-ovo vegetarian meal is VLML. That being said, in my experience airline staff often get confused by special meal requests, and mistakes do happen, so it's a good idea to bring some food with you.

Just remember though, that customs officials will confiscate any fresh produce when you arrive at your destination, so if you don't eat it you'll probably lose it. Things like nuts, seeds, granola bars, etc. should make it through.

Read More: Flying Stateside? Check out this guide to vegan options in the Atlanta, Georgia airport.