Home Travel Africa The Swaziland Reed Dance, or the Dance of 100,000 Virgins

The Swaziland Reed Dance, or the Dance of 100,000 Virgins 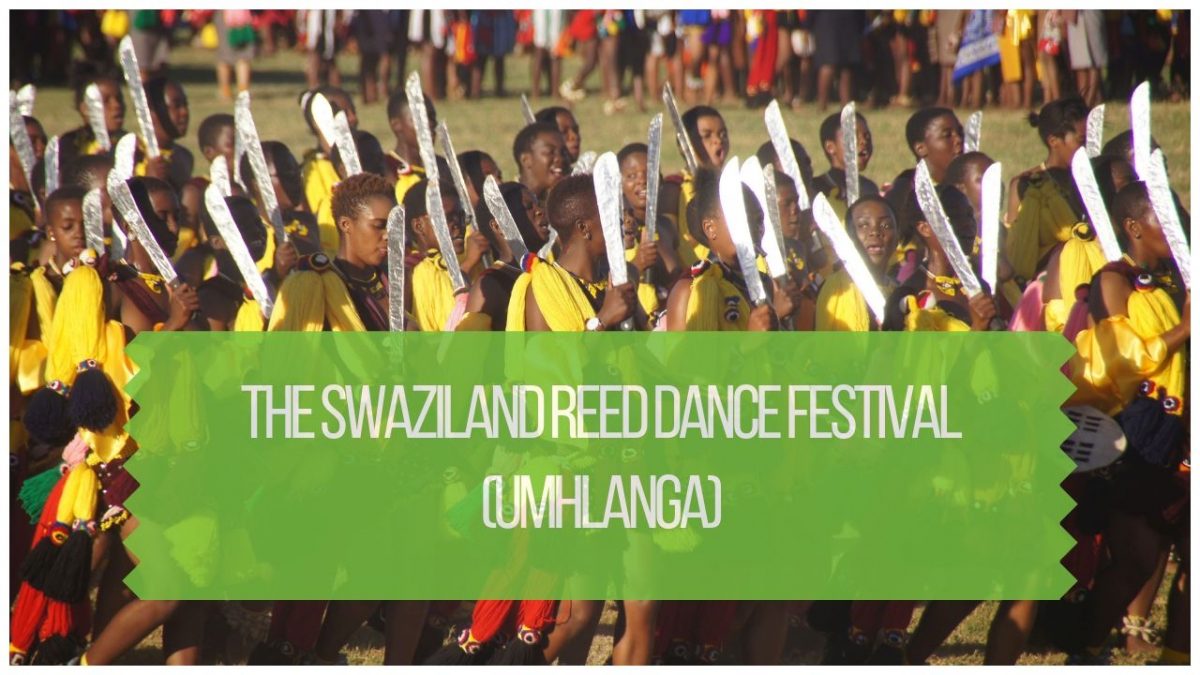 What Is Umhlanga, or the Swaziland Reed Dance Festival?

Who would have thought that Swaziland*, the smallest country in the southern hemisphere, would play host to one of Africa’s biggest and most spectacular cultural events?

Every year at Umhlanga, known more commonly in English as the Swaziland Reed Dance Festival, thousands of unmarried women and girls pay homage to the King and the royal family in an eight-day ceremony full of dancing, rites and rituals.

According to local newspaper reports, more than 100,000 girls and women from all over Swaziland, as well as Swazi girls from South Africa and other neighboring countries, participate in the festivities. It's without a doubt one of the most incredible African celebrations.

To be honest, Nick and I had never heard of Umhlanga before we arrived in South Africa, and we had no plans to visit Swaziland during our three-month trip around southern Africa.

But when our tour guide on a day trip to Blyde River Canyon told us that the festival was coming up in just a few days, a quick Google search was enough to convince us to change our travel plans. 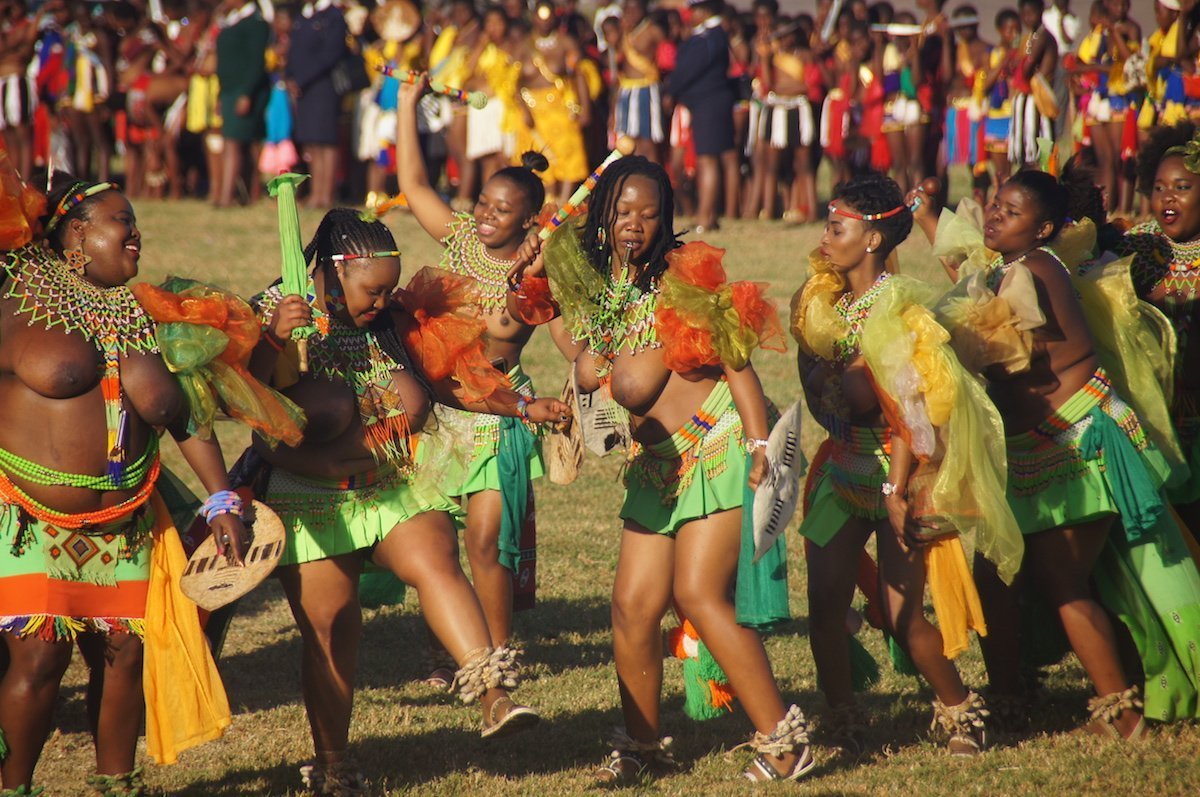 The images we saw of the festival looked spectacular, and indeed, it was even more impressive to witness in person. It was hard to find much practical information about attending Umhlanga, though, which is why I’m writing this article.

First of all, let me clear up some common misconceptions about Umhlanga.

What Happens During Umhlanga? 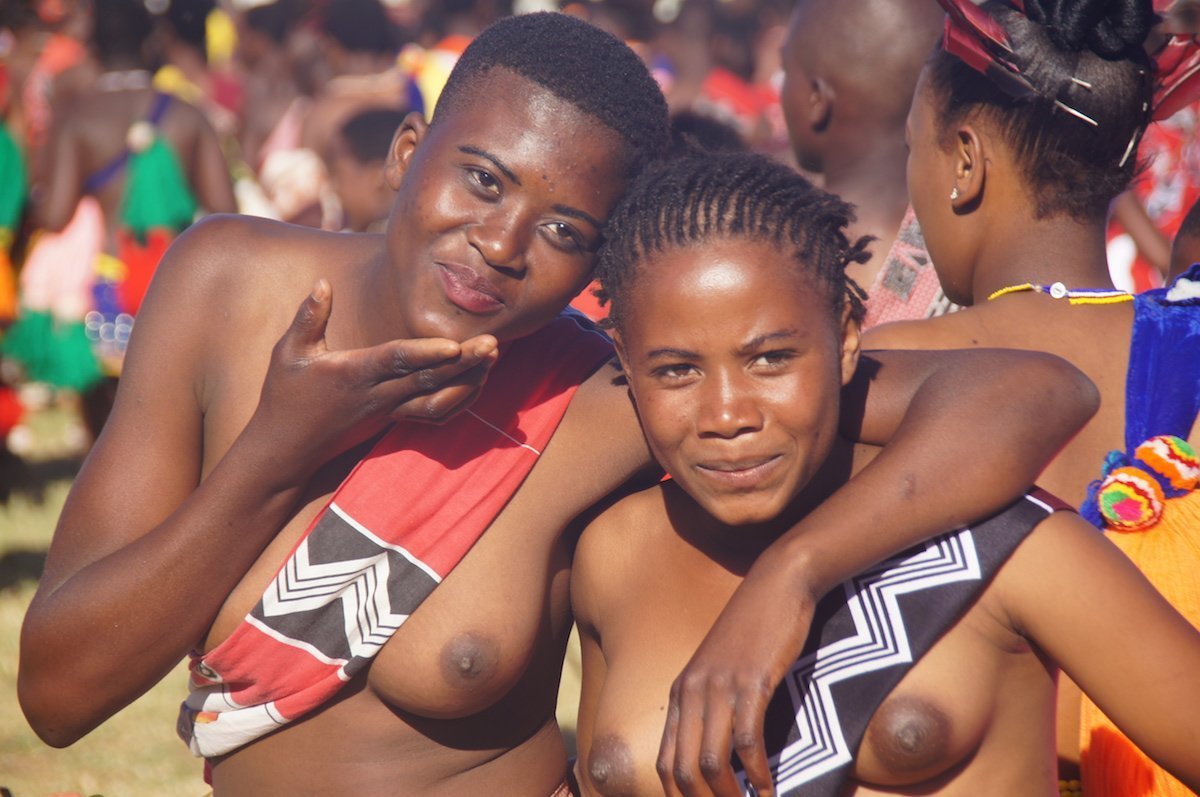 Swaziland girls hamming it up for the camera before the reed dance.

Even though it’s referred to as the “reed dance festival”, dancing takes place only on the sixth and seventh days of the eight-day annual reed dance ceremony.

Most tourists will probably not be interested in staying for the whole duration of the ceremony, as the rest of it is not as visually spectacular.

Also, the girls don’t actually carry the reeds while they are dancing. They have already presented them to the Queen Mother by that point. 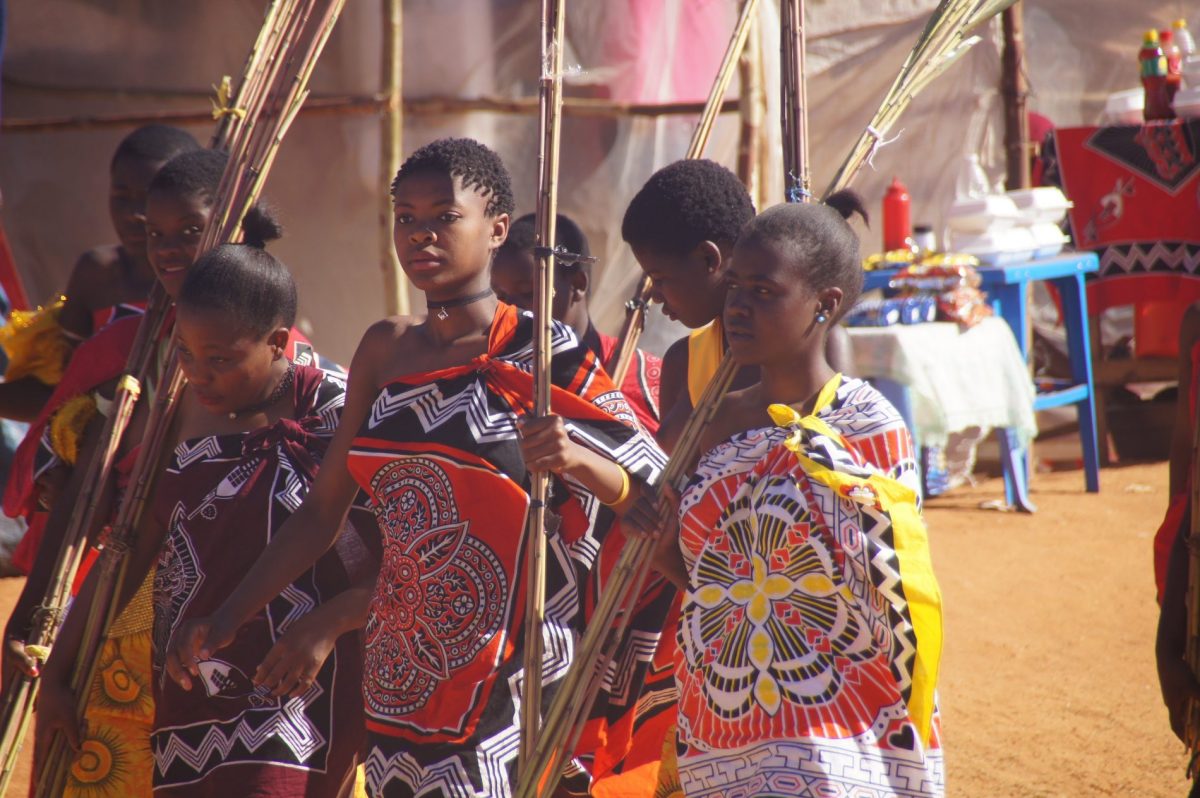 Swazi maidens carry reeds to present to the Queen Mother as tribute labor.

But I’m getting ahead of myself. Here’s a day-by-day rundown of what happens during Umhlanga:

The girls gather at the royal residence of the Queen Mother. There are about 200 regiments, one from each Swazi chiefdom, and each regiment is supervised by men appointed by the local chief. The girls sleep at the homes of relatives who live nearby or in the classrooms of local schools.

Participants are separated into two age groups. The younger group includes girls about 8 to 13 years old, while the older group includes young women about 14 to 22 years old. In the afternoon, they march out to the reed beds.

Each girl cuts about 10 to 20 reeds, using a long knife. She then ties her reeds into a bundle.

In the afternoon, the girls start their journey back to the Queen Mother’s village and arrive after nightfall.

This is a day of rest, when the girls make their final preparations, fixing their hairdos and making any necessary adjustments to their dancing costumes.

This is the first day of dancing, which takes place from about 3pm to 5pm. First, the girls present their reeds to the Queen Mother, leaving them outside her residence as a form of tribute labor. They then march to the stadium and perform their dance, each regiment singing a different song. 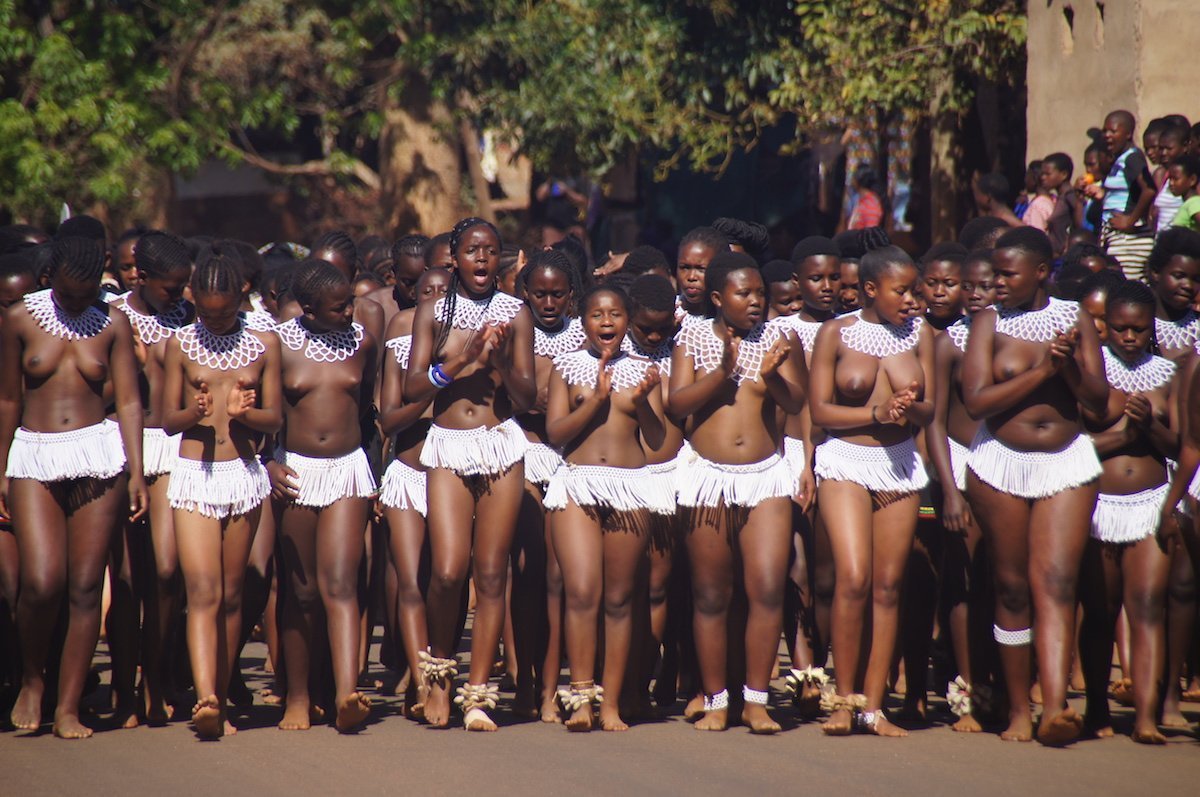 Swazi maidens singing as they march towards the stadium on day 6 of the Umhlanga festivities.

This is the second and final day of dancing. This time, the King is present. Traditionally, he chooses a new wife from among the dancers, although the last time he did this was in 2013. The King already has 15 wives and 35 children.

The King issues a command for about 20 to 25 cows to be slaughtered. Each girl collects a piece of meat from the slaughtered cows and then returns home.

In this video, you can see one of the regiments of Swazi girls heading towards the stadium to begin dancing after they have given their reeds to the Queen Mother. 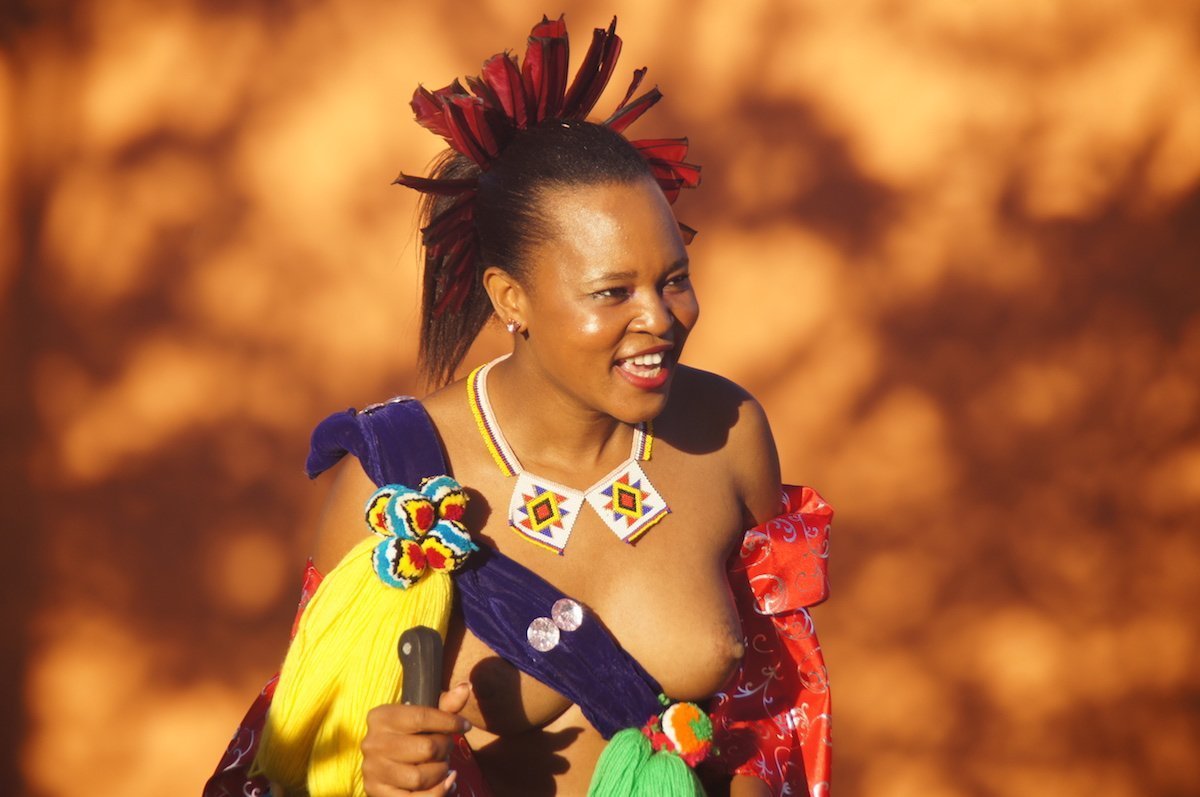 A member of the Swaziland royal family, identifiable by the feathers in her hair.

The costume that the girls wear varies according to their social status. The costumes of girls from the royal family are more elaborate than those worn by the other girls.

At a minimum, all the girls will wear a sash called an umgaco and a small skirt called an indlamu. The girls are discouraged from wearing any underwear underneath the indlamu.

Other possible costume elements include a whistle, bird feathers worn in the hair, and colored tassels hanging from the umgaco, all of which hold special symbolic meaning. When dancing on the last day, they will hold a knife in one hand and a shield in the other.

When Is the Umhlanga Reed Dance? 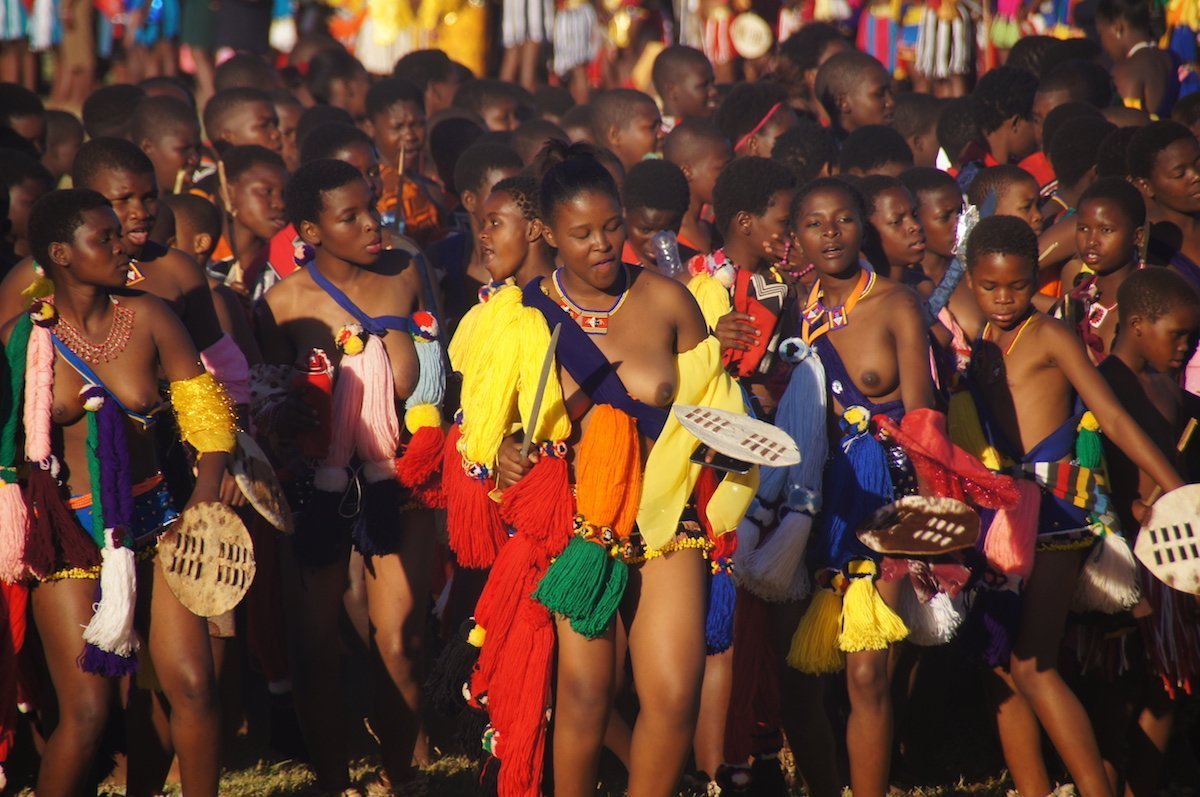 The exact dates of the Umhlanga festival change every year, but it's generally held in late August or early September.

The royal family appoints a commoner to act as captain (induna) of all the maidens. The induna announces the dates of the ceremony over the radio.

The exact dates may not be set until a few weeks before the ceremony, but it usually takes place in late August or early September. The full calendar of events is spread over eight days, but days six and seven are when the dancing happens.

Locals will tell you that day seven is the main event. To a foreign eye, the festivities on the two days seem pretty much the same.

The main difference is that the crowd is much larger on day seven. If you can only attend on one of the two days, consider going on the sixth day.

Where Is the Umhlanga Festival?

Lobamba is located in the Ezulwini Valley, just a short drive from Mbabane – the capital of Swaziland.

Where to Stay During the Swazi Reed Dance

This is where we stayed. It’s just a 45-minute walk away from the stadium. The hostel is friendly and has some private rooms as well as dormitories.

It’s close to The Gables shopping center, which contains a large supermarket and several restaurants, including Chinese and Middle Eastern restaurants with vegan and vegetarian options. 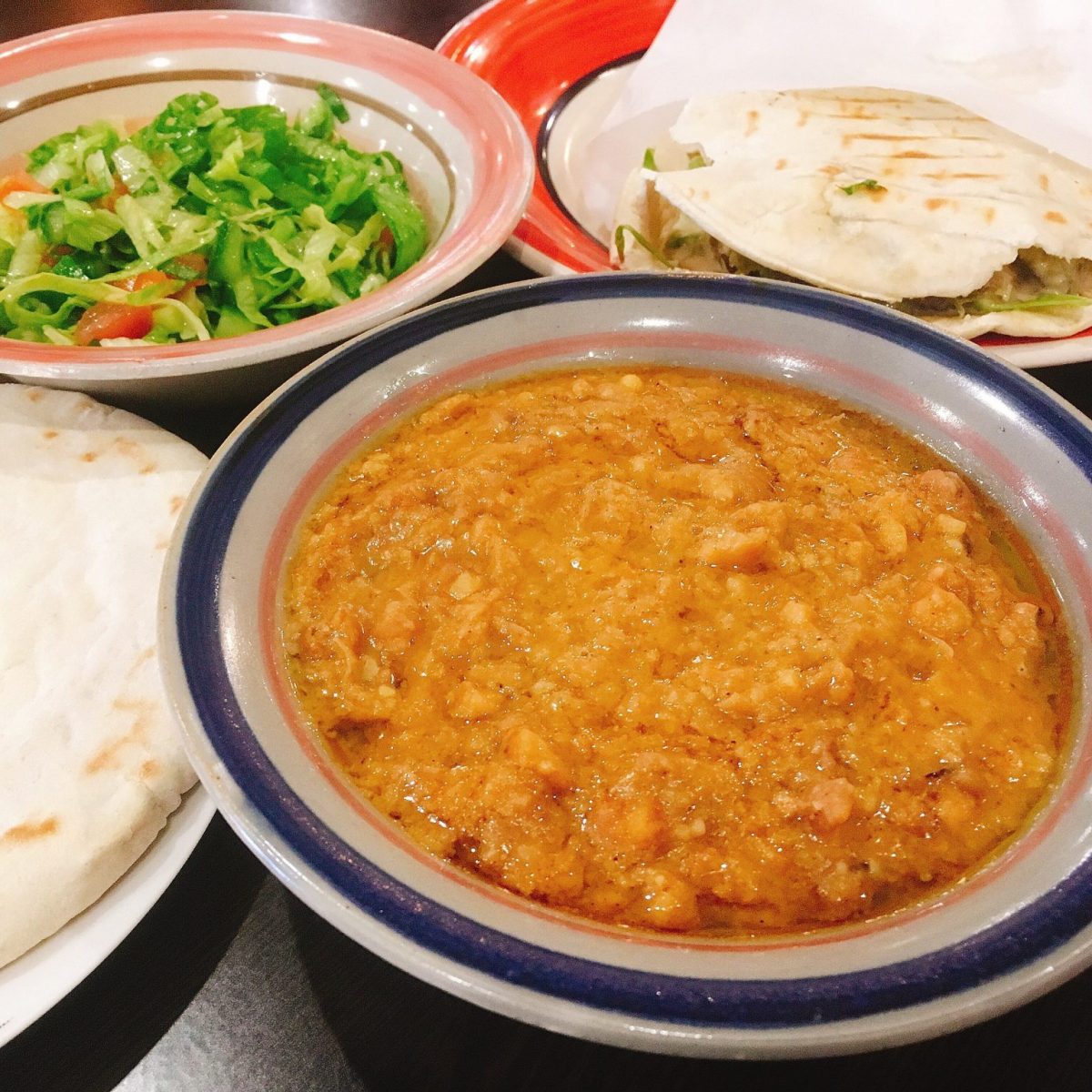 We weren’t able to stay here because it was full, but it comes highly recommended. The lodge is set in a beautiful location among boulders, indigenous trees and a flowing stream. On Wednesdays, they serve traditional Swazi food with vegetarian options.

Click here to see photos of the lodge, read reviews and book your stay.

What to Bring to the Swaziland Festival 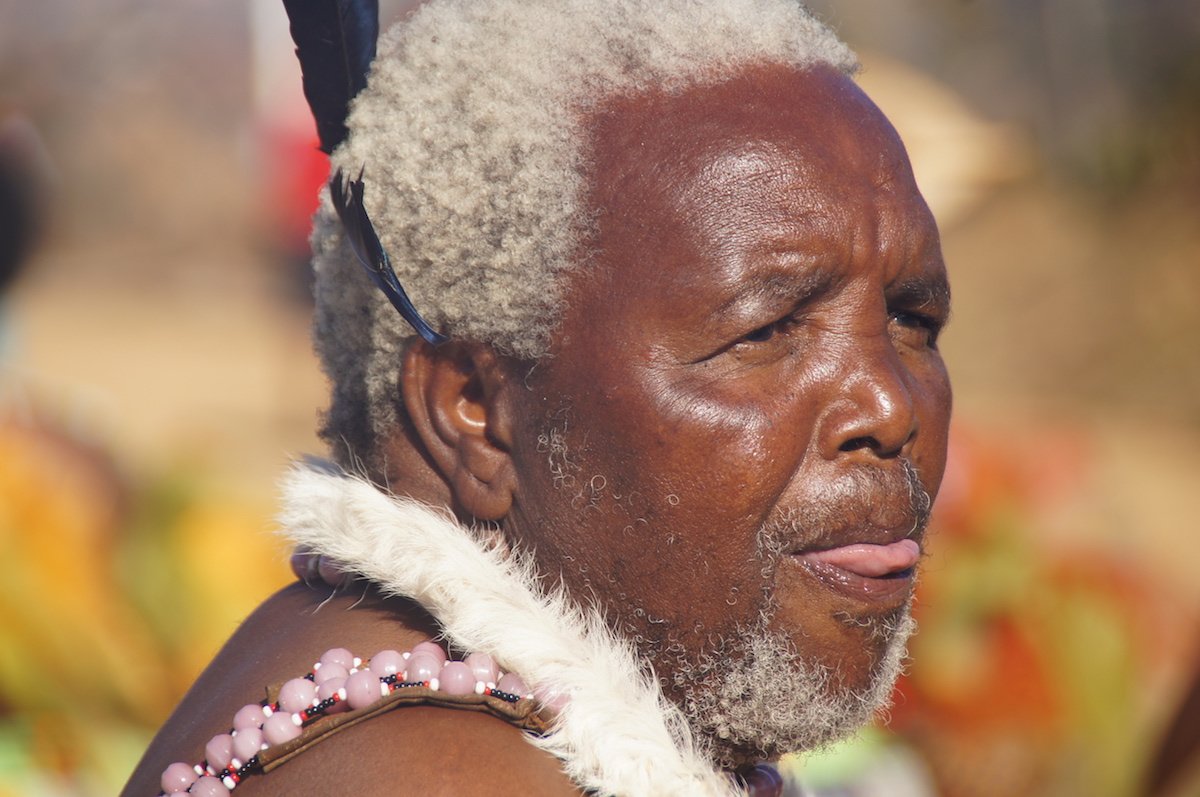 When the king arrives, chiefs like this man crowd around him and raise their fighting sticks and battle axes.

You will need to pass through a metal detector when entering the stadium, but the security check is pretty minimal. All of the items listed below will be allowed through security.

What to Eat at the Reed Dance Festival 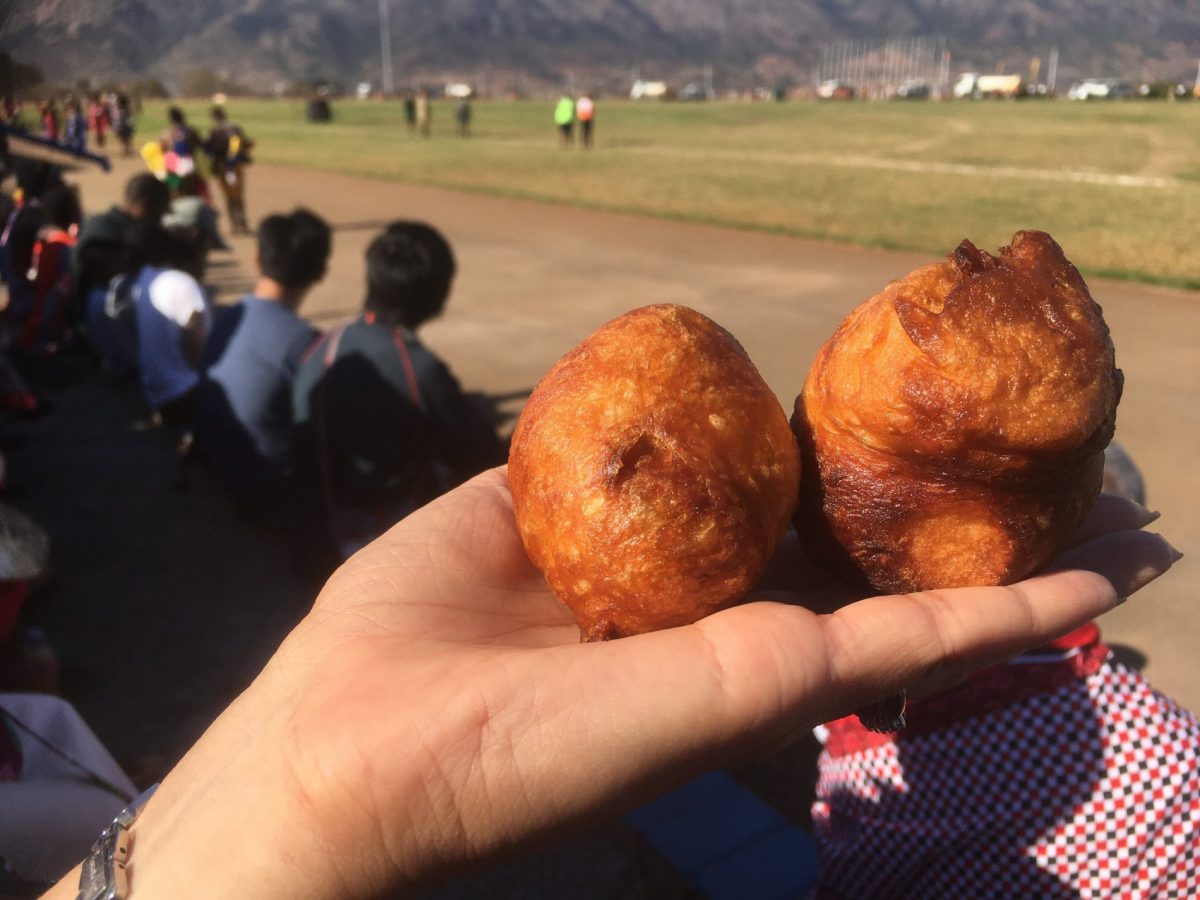 Mafetsi - fried local snacks that are like doughnut holes, but not as sweet.

Snacks are sold at the makeshift stalls outside the royal residence grounds. These include popcorn, potato chips, French fries, and mafetsi (a local snack that’s similar to a doughnut hole).

On the grounds, but outside the stadium, there was also a restaurant tent. This offered a Western-style buffet, some Chinese dishes and some traditional Swazi food.

Quite a few of the traditional Swazi dishes are vegan, as is the case with many African cuisines.

For more on traveling as a vegan in other African countries, see these articles:

Apart from a few roaming vendors, there was no food sold inside the stadium itself, so be sure to eat before you enter, or pack some snacks.

Photography Tips for the Umhlanga Festival 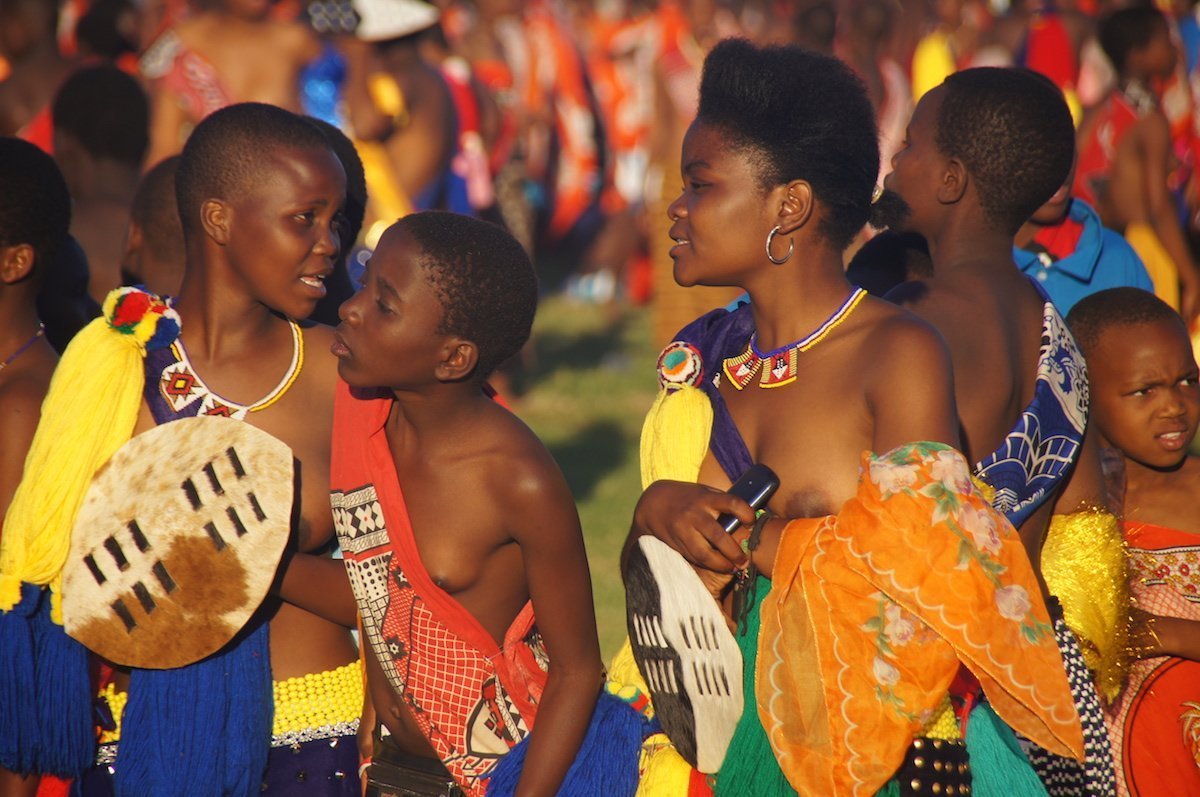 The stadium is already in shadow by the time all the girls reach the field, so it's best to photograph them as they are marching in. 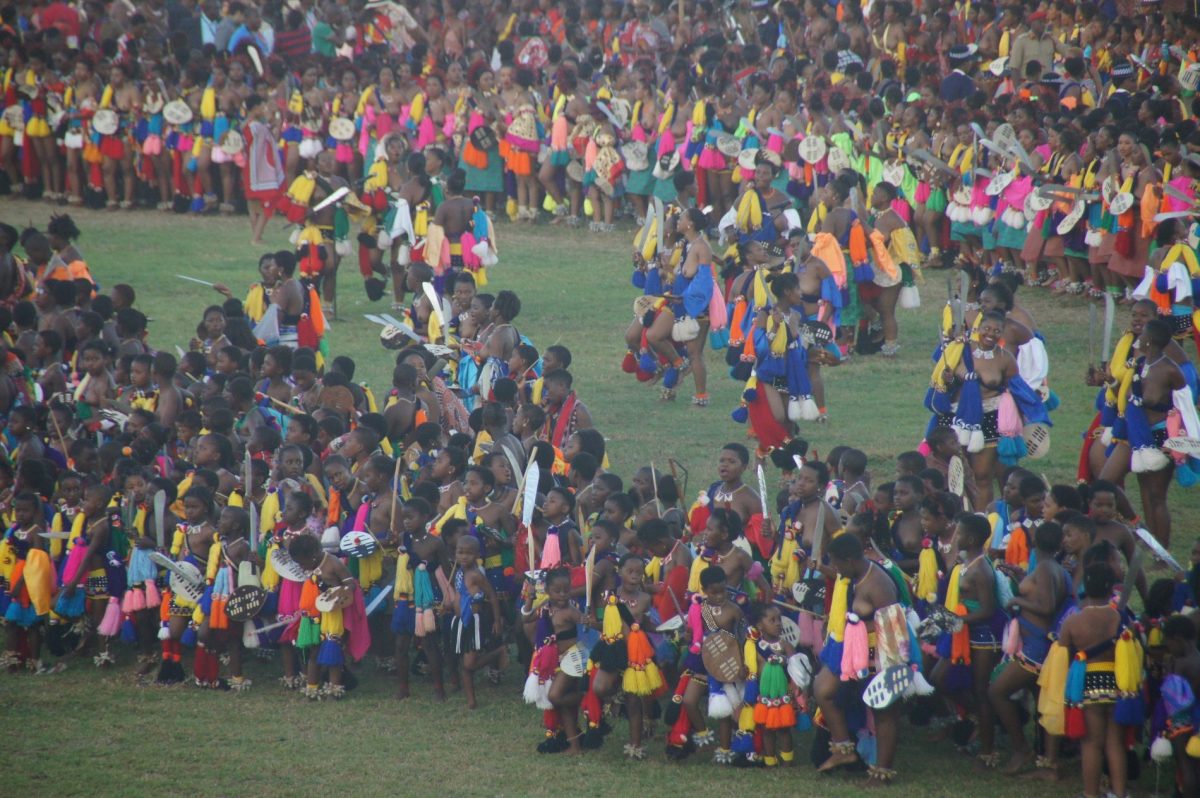 The culmination of the Umhlanga Festival, when the Swazi maidens dance together in the stadium as dusk falls.

* I have used the name “Swaziland” in this article because that’s currently how most people know the country. However, in April 2018 the King declared that the name of the country would be changed to Eswatini. The new name means “place of the Swazi” and is how the Swazi people refer to their country in their local language. 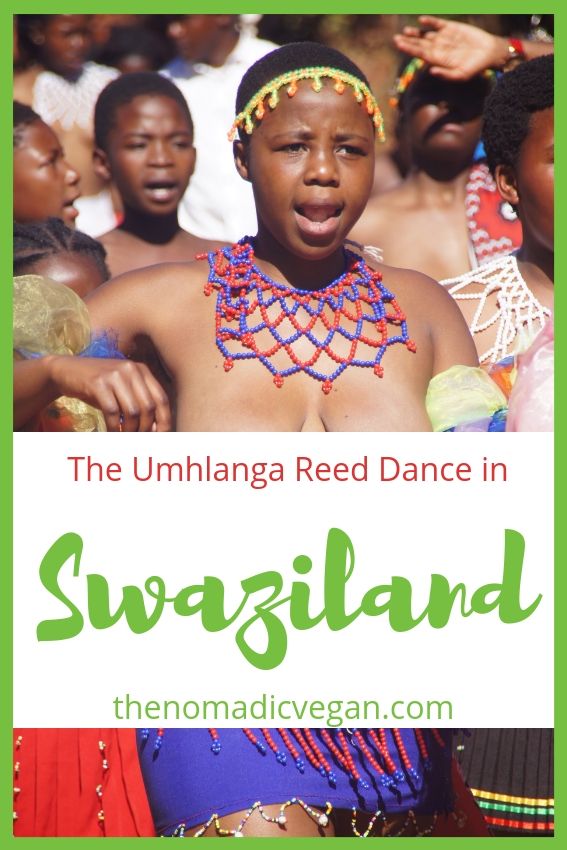 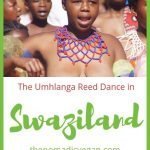