Sweet Treats in Lamia and Cryptic Prophesies in Delphi

We took a series of four buses to get from Meteora to the ancient site of Delphi. As usual, our only layover of any substantial length was right at lunchtime, in a city called Lamia. The bus station was located on an uninspiring suburban street that didn’t seem to have much in the way of dining options. Luckily, though, a take-away counter inside the small station itself offered slices of spanakopita, my favourite Greek street food. 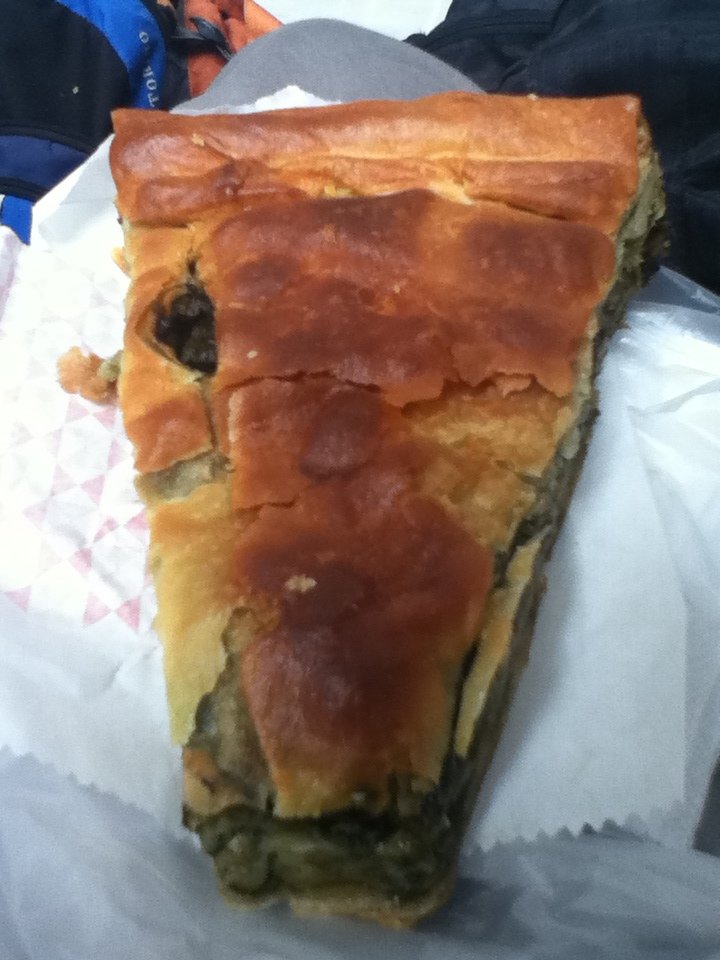 Actually, the woman who served me referred to it as “spinach pie without cheese”, which would be spanakopita, but the sign said “hortapita”, which, if my very limited Greek can be trusted, refers to a pie filled with any of a number of wild greens, but not spinach. In any case, it was delicious and filling, as usual.

While the savoury vegan options at the station were pretty limited, it was a treasure trove of sticky, sweet vegan desserts. In addition to the usual pies, the bakery also had a huge display case containing all kinds of traditional sweets.

These included various flavours of loukoumi (Turkish delight, but don’t call it that in Greece!) as well as others I had never seen before, such as soutzouki. As I later discovered, these log-shaped sweets are made by threading walnuts or other nuts onto a string, dipping them several times in grape must and then leaving the whole thing to dry for several days. The one I chose was made with walnuts and covered with sesame seeds on the outside. 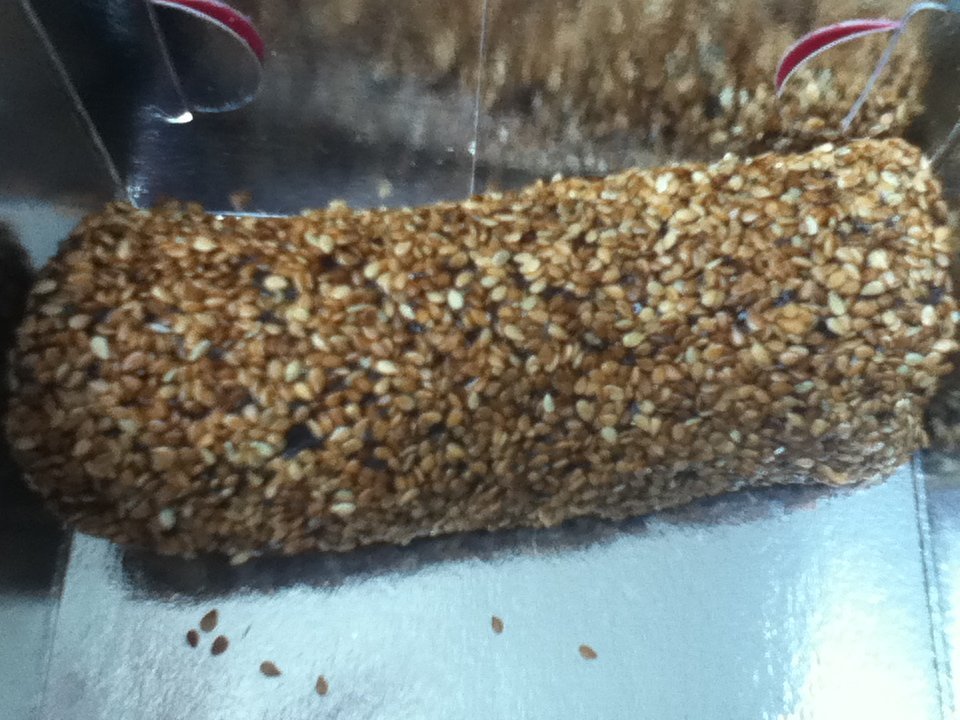 And then, next to the soutzouki, I saw a huge round pan of something dark and glistening, with a sign next to it that had this one magical word written in Greek: halva. Up to this point in my life, I had experienced two different kinds of halva, both of which were amazing.

One is a tahini-flavored treat that comes in a solid block, though still soft enough to easily crumble apart with a fork. It is commonly found in many Middle Eastern countries, and I had also seen it in Greece but hadn’t gotten around to trying it yet.

The other I’ve tasted only once, in the narrow alleyways of Old Delhi, and I remember it as a wonderfully gooey, warm bowl of semolina, carrots, spices, chopped nuts, etc. that tasted to me like the food of the gods. Well, what I saw in the Lamia bus station was neither of these, but something altogether new and wonderful. 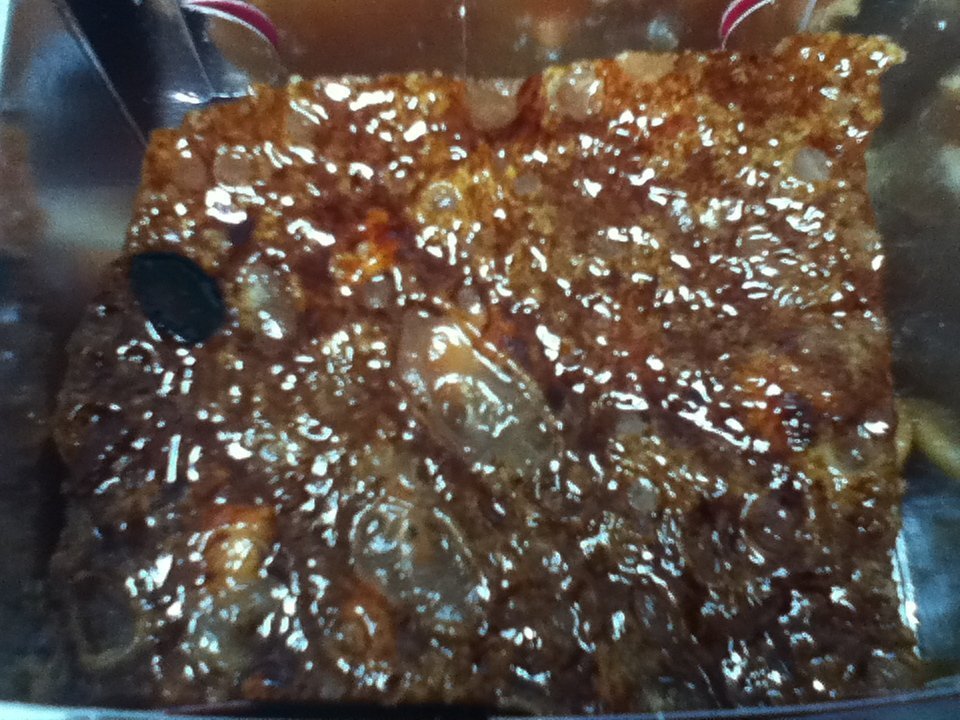 In texture, it was fairly similar to loukoumi – a kind of jelly-like substance that’s easy to bite into but still much firmer than Jell-O. The taste though, was somewhat similar to the warm halva served in Delhi, at least as I remember it – a heady mixture of sugar, nuts and spices.

Apparently, the word “halva” simply means dessert or sweet in Arabic, which explains why it takes so many different forms in different countries around the world. So the Lamia bus station, as it turned out, was full of surprises and definitely helped improve my knowledge of desserts in the region, though it wasn’t so kind to my waistline. These treats are egg-and-dairy-free (and I believe also honey-free), but they are definitely not low-calorie!

Eventually, we arrived in Delphi, the home of the panhellenic sanctuary of Apollo that was known in ancient times as “omphalos”, the navel or center of the world. It was a place of pilgrimage for people from all over ancient Greece, who came to hear the prophesies told by the Delphic oracle.

Along with the ancient site of Delos near Mykonos, this ranks as one of my favorite archaeological sites in Greece. 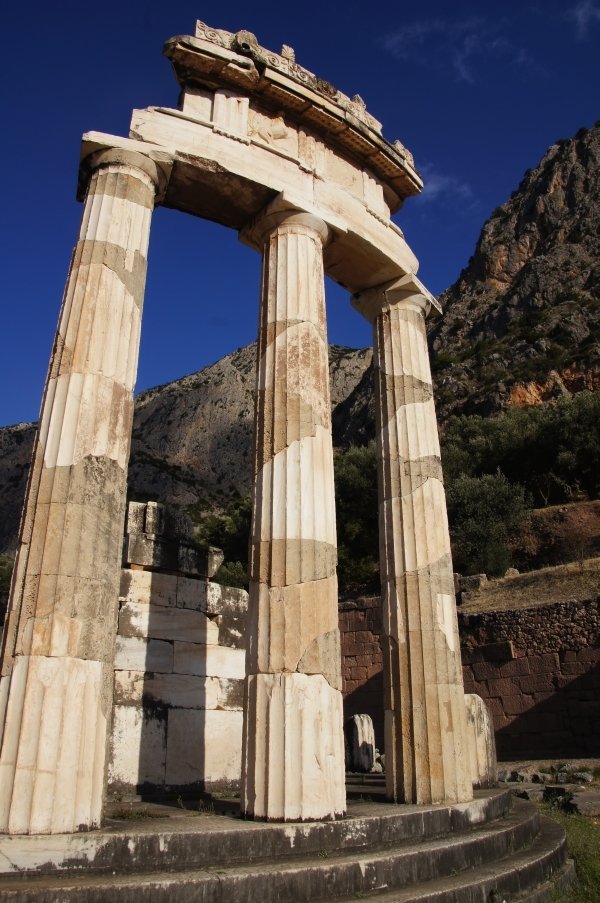 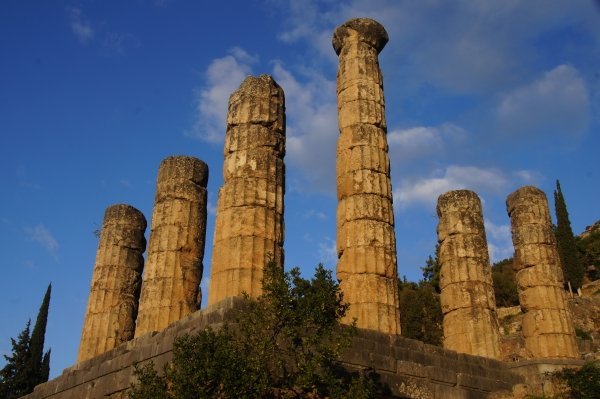 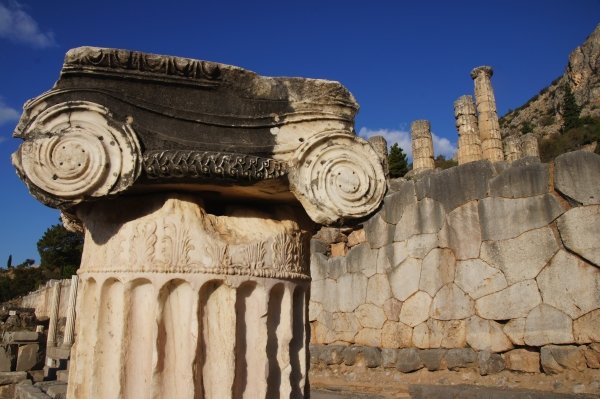 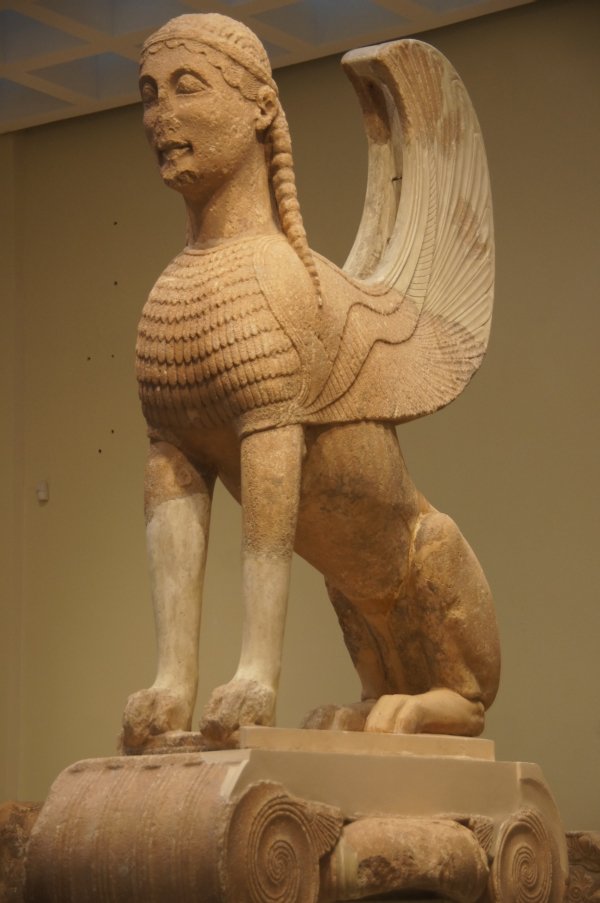 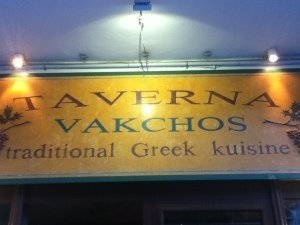 As a town that caters to an endless stream of tourists, Delphi has more than its share of dubious restaurants serving supposedly authentic Greek cuisine alongside pasta and pizza. That being the case, we were very happy to find Taverna Vakhos, which has very tasty food, good service and beautiful views out to the Gulf of Corinth. And their website expressly states that they offer both vegetarian and vegan dishes, so that’s always a good sign. To start with, our bread was served with a complementary ramequin of melitzanosalata (no mayonnaise), which in addition to the eggplant purée also included little bits of other vegetables, such as tomatoes and peppers. 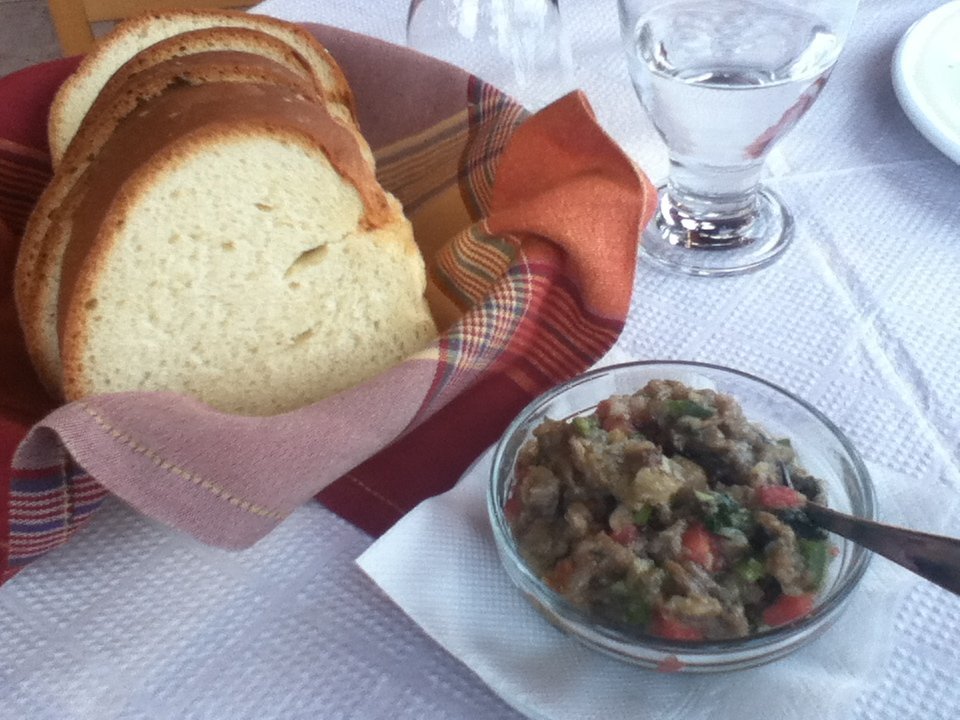 I then ordered the spinach salad with lentils, bell peppers and sun-dried tomatoes. Delicious! 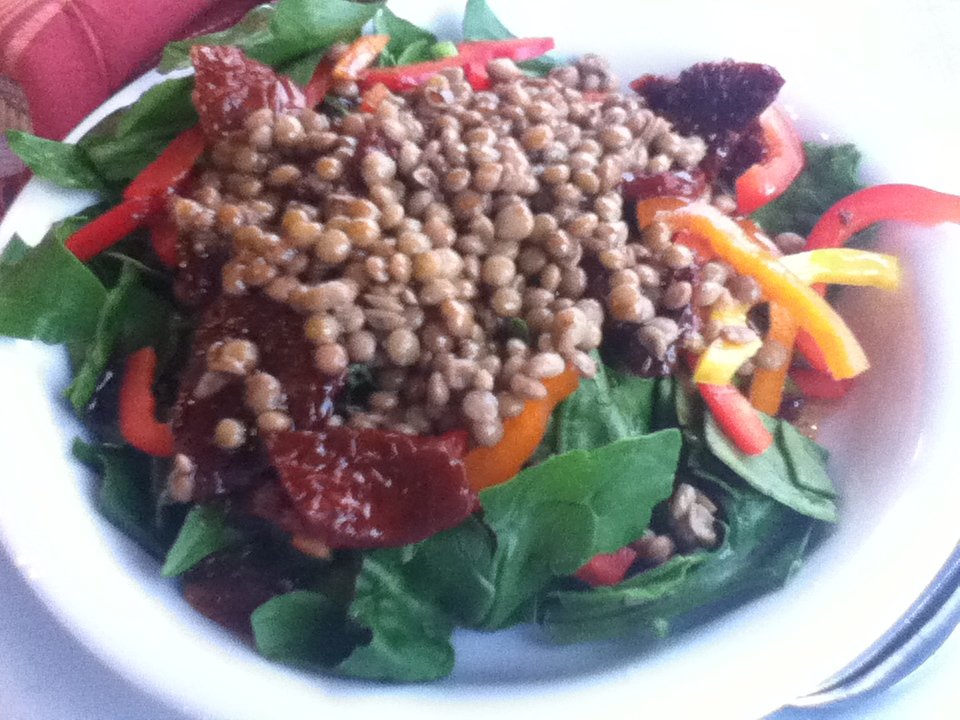 This was one of the more inventive salads I had in Greece and was also the only time I saw lentils on a menu. I combined this lovely salad with a bean soup, which was the usual tomato-based soup with cannellini beans, but this one was thicker and heartier than others I had on the trip. 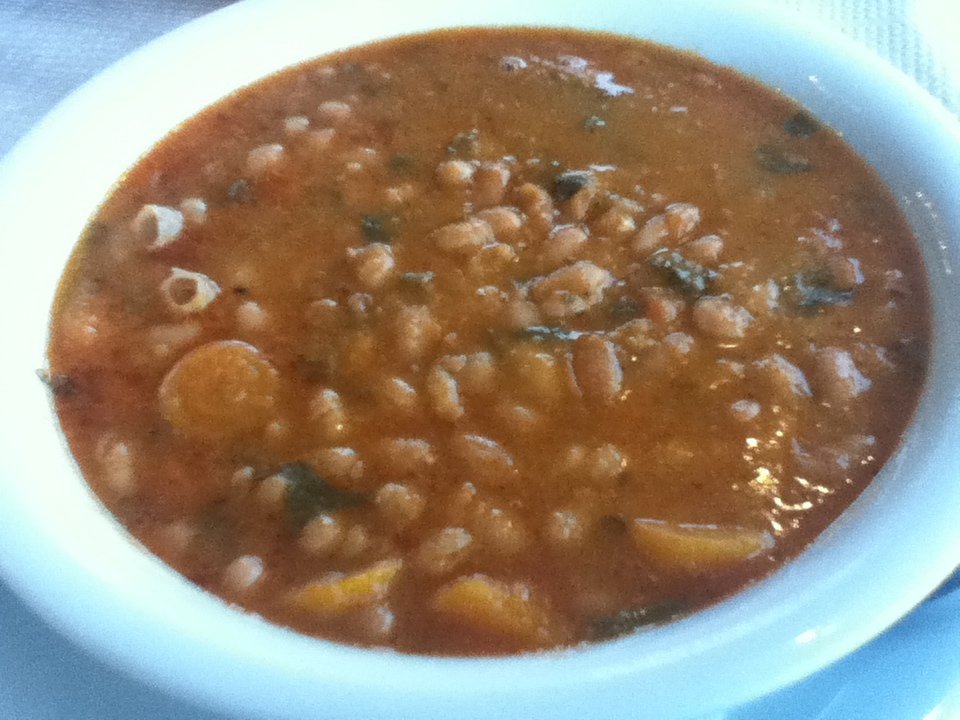 To top it off, our server also brought out little complementary portions of baklava with the bill. 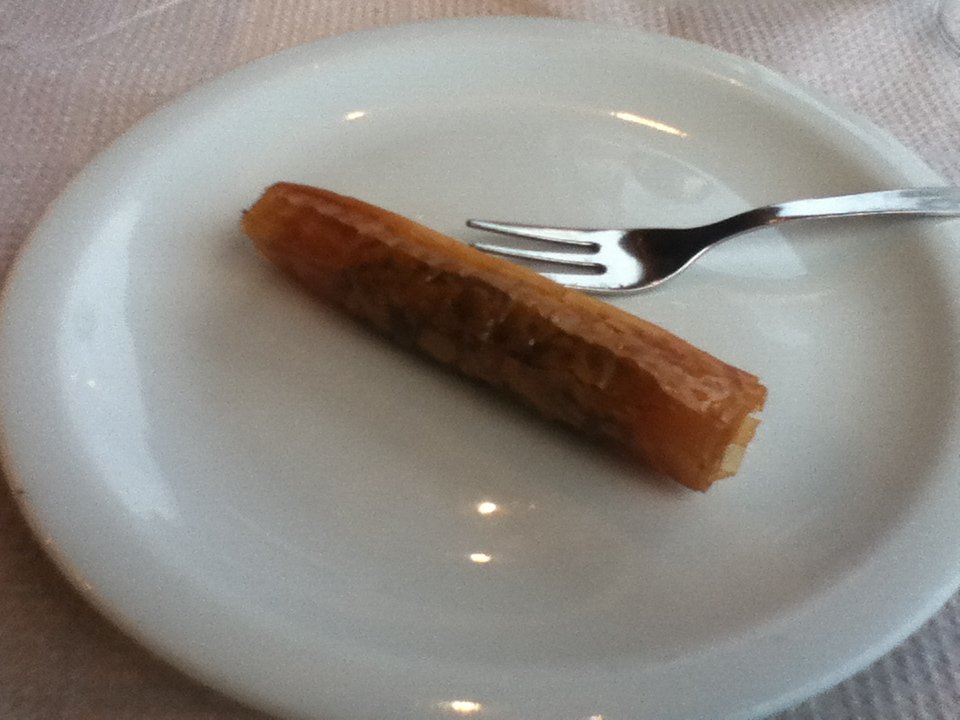 If there’s one thing we’ve learned by now, it’s that the true mark of an authentic Greek tavern is the free dessert and/or liquor at the end of the meal. And, unlike most of the desserts that have been given to us, this one was egg-and-dairy-free (though I didn’t ask about honey).

And that brings us to the end of this series of posts on Greece, and the end of the Grent Lent! Happy Orthodox Easter everyone! And don’t worry, even though Lent is over, there is still plenty of nistisimo food to be found in Greece no matter what time of year you go. In fact, we were not in Greece during any special fasting period, and just a quick glance through my previous posts on Greece will show you what a huge variety of delicious vegan dishes we tasted while we were there.