20 Traditional Mozambican Foods that are Vegan 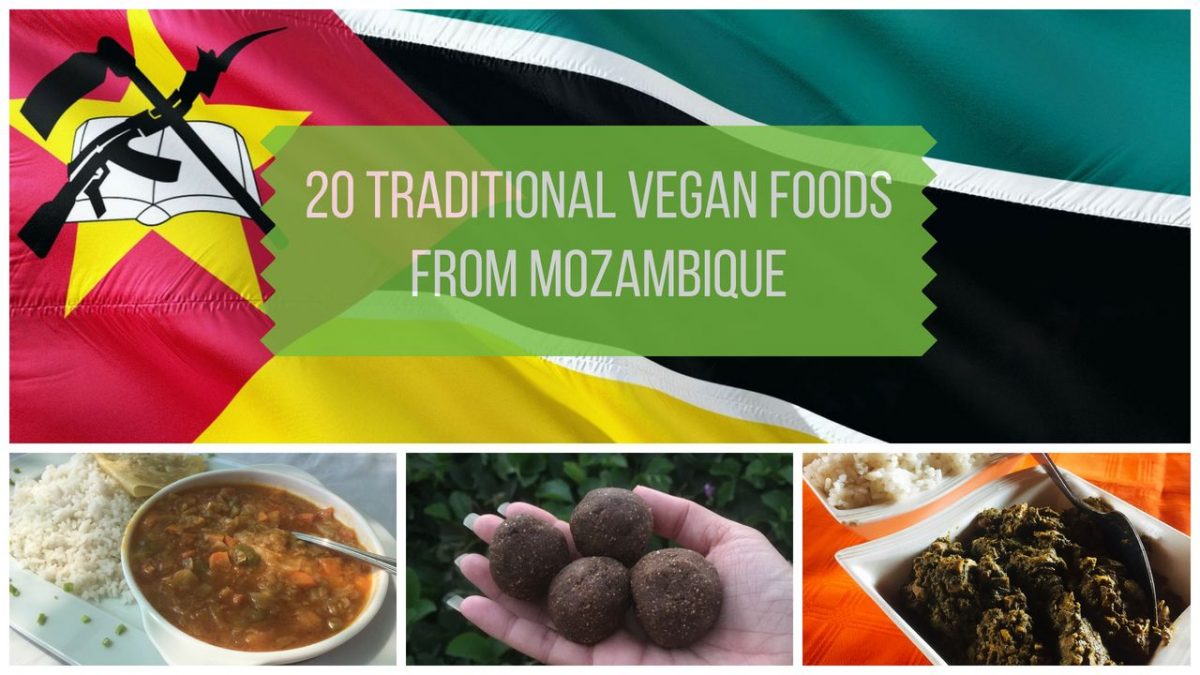 I was told that I would have a hard time traveling as a vegan in Mozambique.

Nope! I discovered dozens of local vegan dishes there. It was just a matter of figuring out where to look (hint: eat where the locals eat).

Originally, I had planned to visit a number of different places in Mozambique. But when I arrived on the Island of Mozambique (Ilha de Moçambique), I fell in love with this sleepy, former colonial capital and didn’t want to leave.

The Telegraph has called it a mini-Zanzibar before mass tourism, and that’s a pretty perfect description of this tropical paradise. I don’t even like beaches, and I was still captivated by the place.

In the end, most of my time in Mozambique was spent on the island, so many of the foods listed here may be local dishes that are only eaten in that part of the country.

Also, a number of these are street foods that you will not find on any Mozambique restaurant menu. The restaurants cater mostly for foreign tourists, meaning that they serve mostly meat and seafood.

Many traditional Mozambique recipes are vegan, but to find them you have to eat where the locals eat. On the island, you’ll find local women at the entrance to the pontoon (pontão) serving some of the dishes listed below.

The food is authentic and costs a tenth of the price of a meal in a restaurant. And eating there is a great way to meet the locals!

Other foods listed here are more like street food snacks, or “epethe” as it’s known in the local language spoken on the Island of Mozambique. You will find these being sold on the streets or at local markets.

If you visit the Island of Mozambique in September, you may even be lucky enough to catch the local food street festival!

This popular cassava leaf stew is made by grinding up cassava leaves (or mandioca as it’s known in Portuguese) and slowly cooking them with garlic, onion, cashews and coconut milk. It’s often spiced up with that famous Mozambique sauce – piri piri. 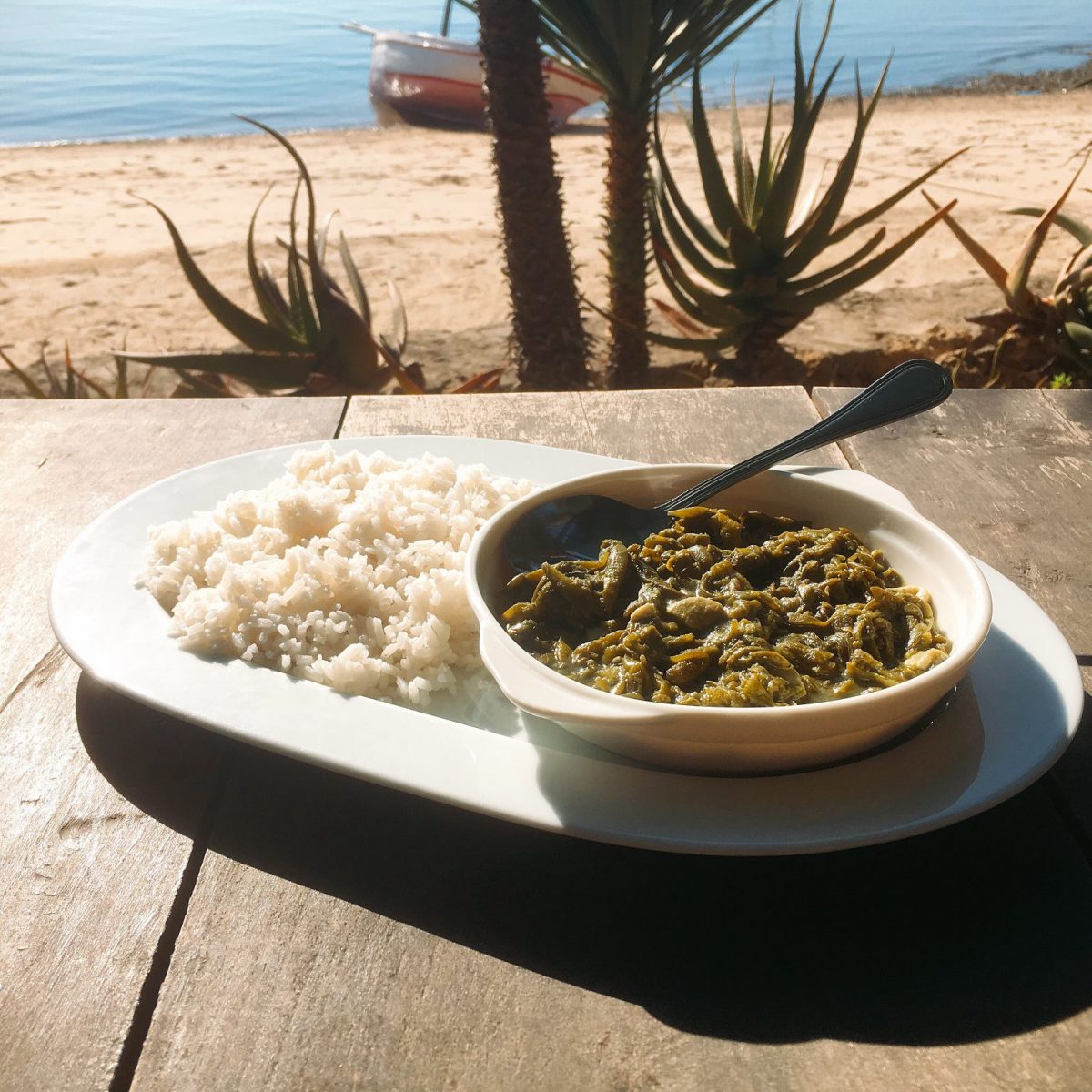 The Island of Mozambique is the place to go for delicious seafood!

But wait, before you click away, let me explain. I’m not one of those people who tries to wear the vegan label while still eating fish, calling themselves a “pescatarian vegan” or a “seagan” (yes, sadly, this really is a thing).

Obviously, animals are not food. So, when I say “seafood”, I’m talking about plants, of course!  Edible sea plants, that is. On the island of Mozambique, they make a delicious vegan seafood dish, called “matapa de siri siri”.

This local specialty is similar to the matapa de mandioca eaten in the rest of the country, except that edible sea plants are used instead of ground cassava leaves.

Siri siri is a wild succulent plant that grows on the sea bed and on the beaches around the Island. It’s often underwater but becomes exposed during low tide.

To make matapa de siri siri, the green leaves of the sea plant are chopped finely and boiled, then mixed with garlic, onion, coconut milk and cashews. The best matapa de siri siri I tasted was at a local restaurant called Sara’s Place on the island. Watch my reaction when I tasted it for the first time in the video below! 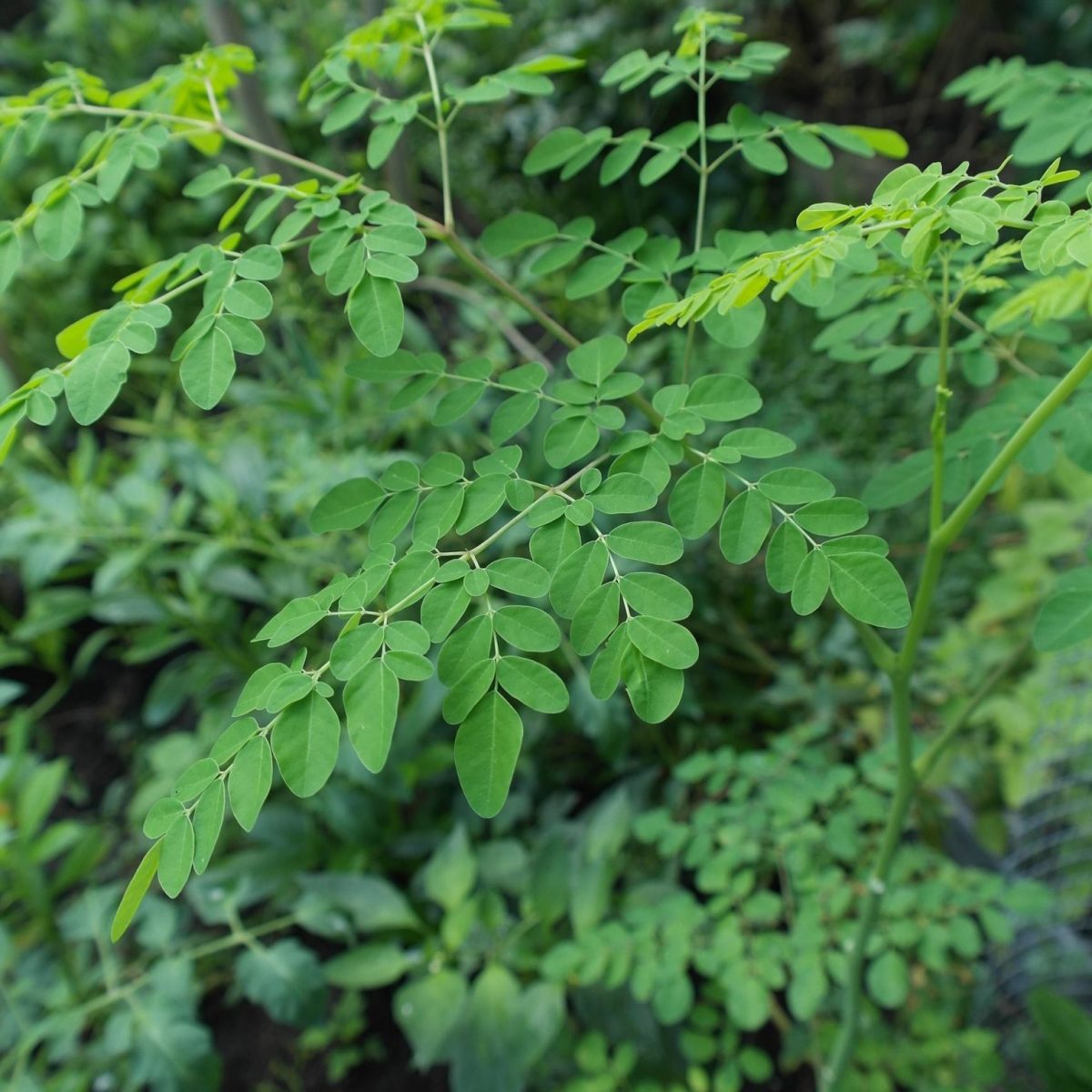 If you’re into superfoods, you’ve probably heard of organic moringa powder, or bio moringa as it’s known in Mozambique. Health-conscious people in Western countries have been going wild for the stuff, and with good reason. Have a look at a moringa nutrition label – it’s off the charts!

This highly nutritious plant grows naturally in Mozambique and is available throughout the country. In the West, moringa powder is normally taken in a capsule as a supplement, but in Mozambique the leaves, fruit, flowers and roots of the plant are eaten whole.

In many provinces, the leaves are used to make a curry or a simple onion and tomato stew. Some local restaurants even offer salads with moringa or “moringa matapa”.

And if you want to know where to buy moringa plant in powdered form, you’ll often see it sold that way too in local markets, where it will cost a fraction of what you pay for it back home. 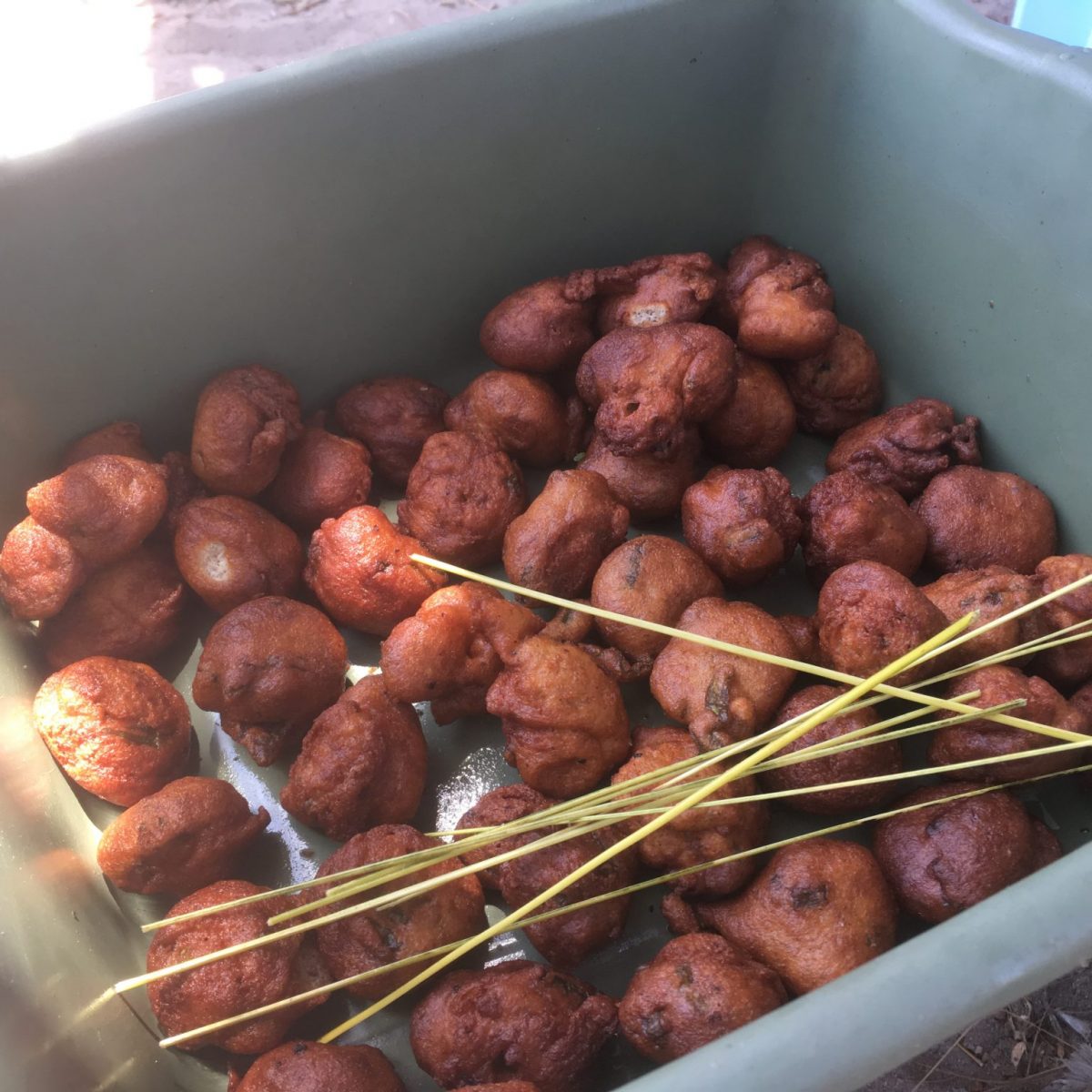 These fritters are made from a dough of black-eyed pea flour that is mixed with piri piri peppers and deep fried.

Due to its tolerance for sandy soil and low rainfall, the black-eyed pea (known locally as feijão cute in Portuguese) is an important crop in many parts of Africa, including Mozambique.

I grew up eating black-eyed peas in Alabama, but I’d never had them like this before until I went to Mozambique!

Xima, also spelled “chima”, is a type of porridge made from cornmeal, kind of like polenta. It is a staple food in many African countries, including Mozambique. Check out my article “6 Ways to Eat Vegan in Africa” to learn some of the other names xima goes by elsewhere on the continent.

This popular porridge can be eaten with any number of different stews and sauces. Here, it’s pictured with cooked sweet potato leaves (madledlele). 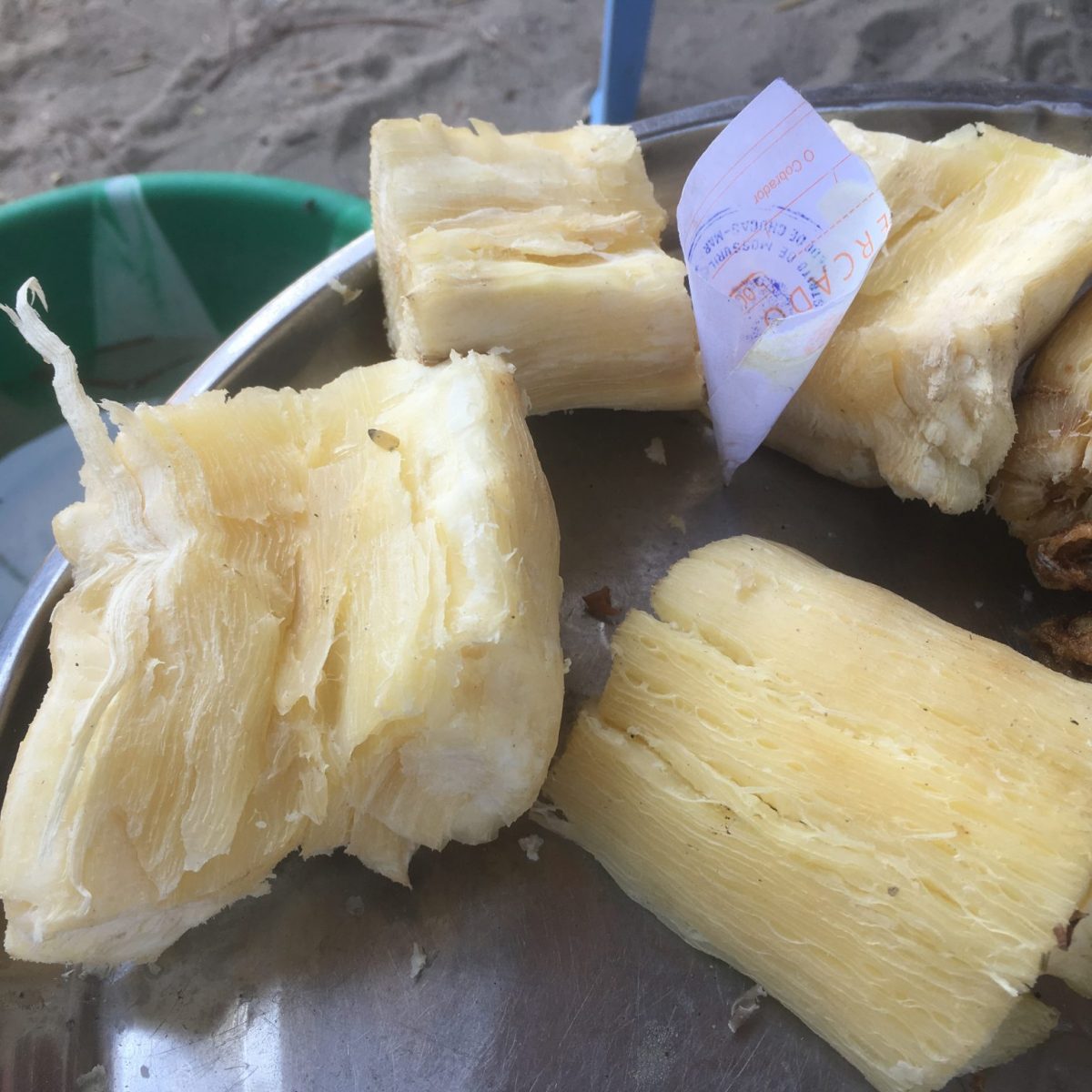 The leaves are not the only edible part of the cassava plant. The starchy root is also cooked and sold on the streets of Mozambique. It tastes a little like a potato, only stringier. 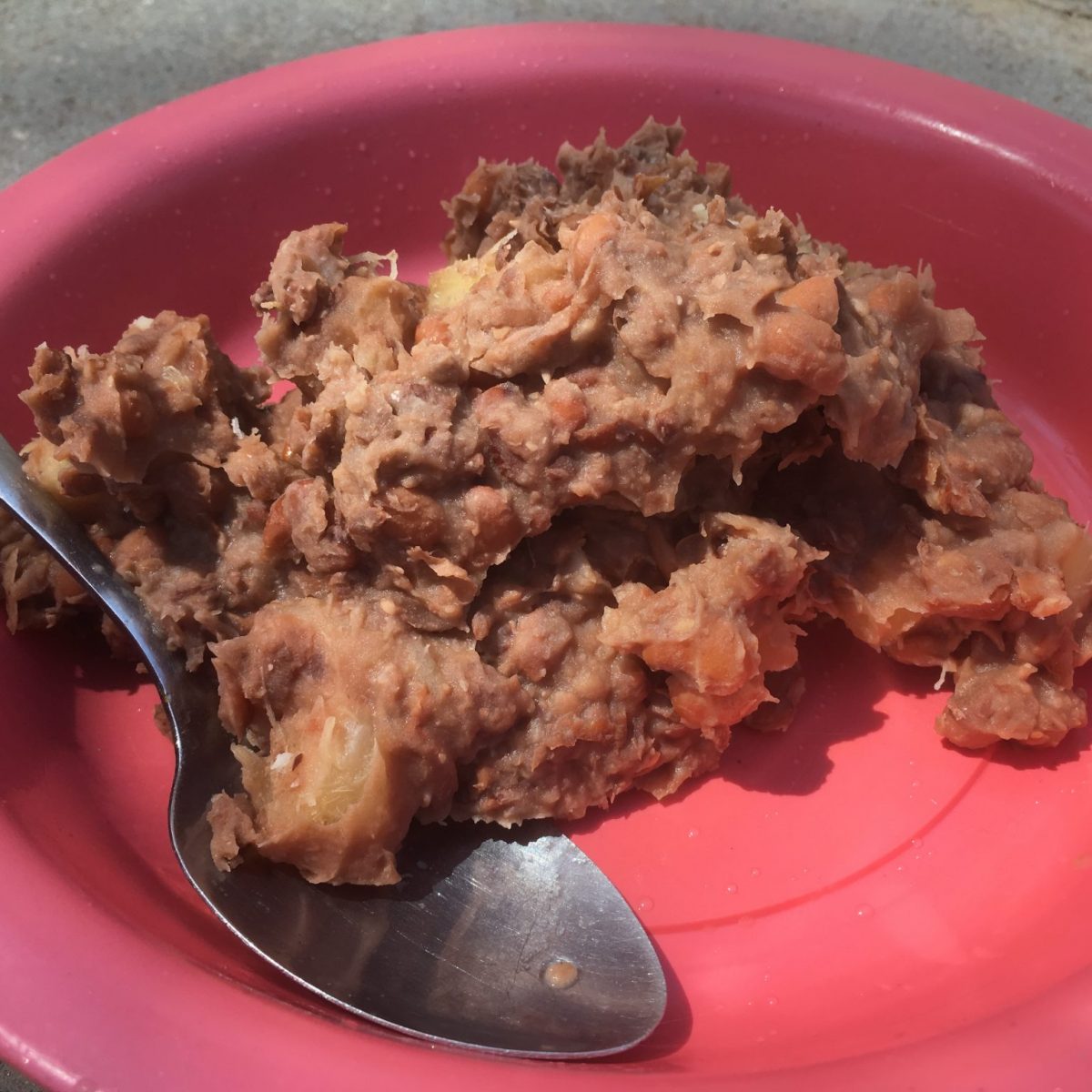 It might not be the prettiest dish to look at, but it sure is filling, nutritious and delicious. This hearty meal is made by mixing mashed black-eyed peas with cassava root. On the Island of Mozambique, you can often find it sold by the street vendors at the end of the pontoon.

This is a simple dish of black-eyed peas mixed with white rice. It can be eaten on its own or with a sauce. 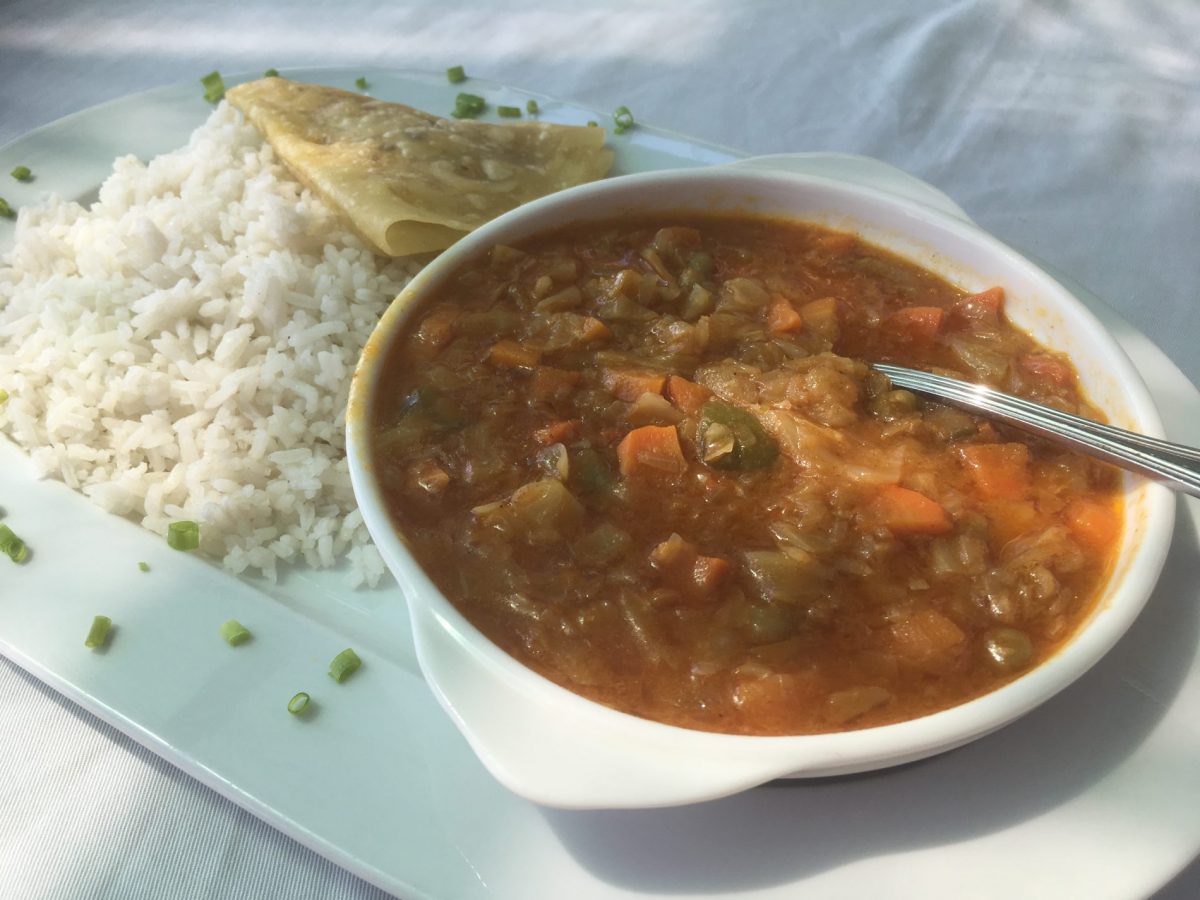 This is one of the few vegan options that you’re likely to find at the restaurants catering for tourists. It’s served with white rice and sometimes a paratha. Sounds very Indian, I know, but according to one of the waiters at Reliquias it’s a traditional local dish.

It’s a good example of how many cultures have left their mark on the island, including Arab, Portuguese and Indian. 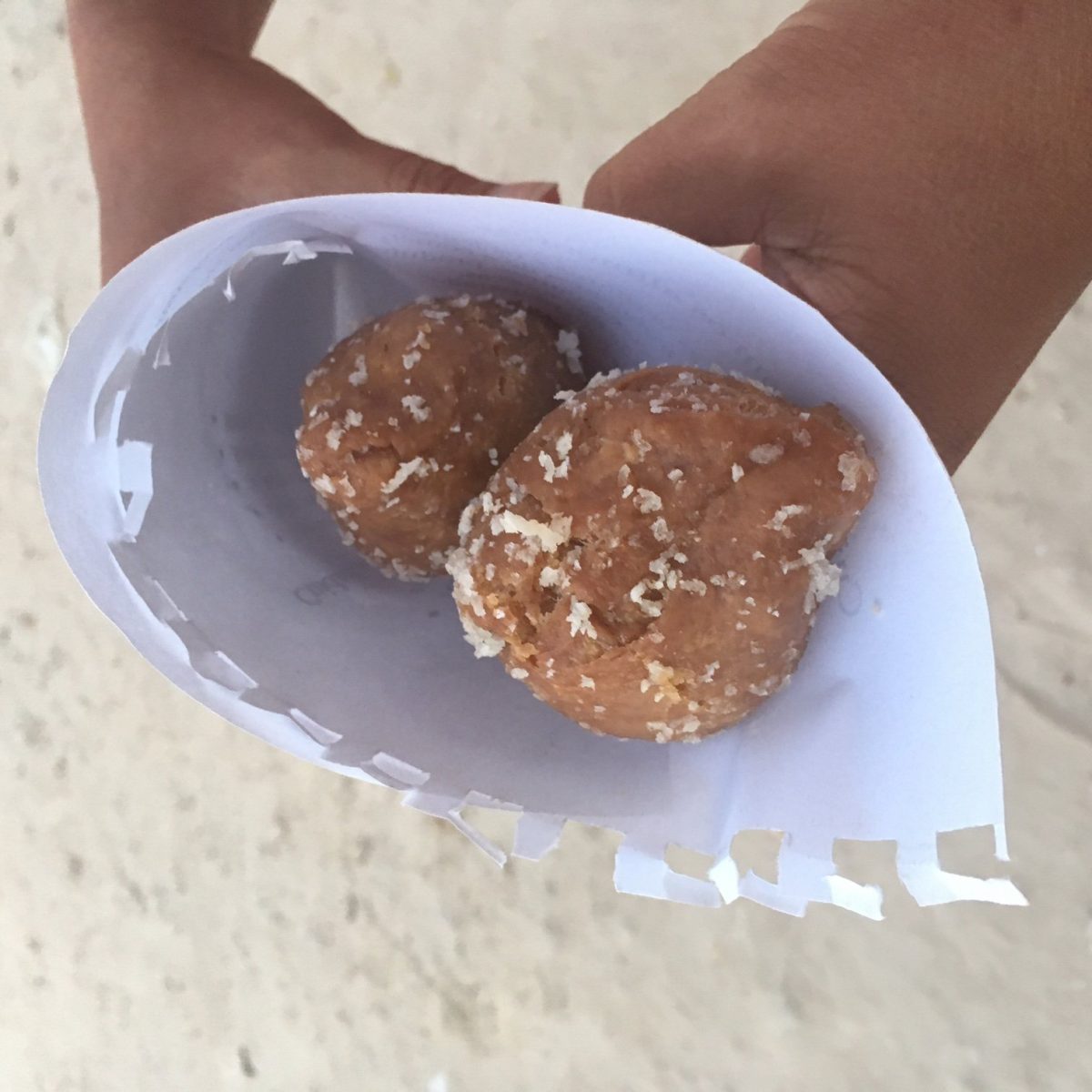 Frito simply means “fried” in Portuguese, and it refers to fried dough. Fritos are similar to doughnuts, but not nearly as sweet. They also come in various shapes and sizes. The balls shown here are simply known as bolinhos (little cakes). I also tried one twisted into a knot that was called a laço. 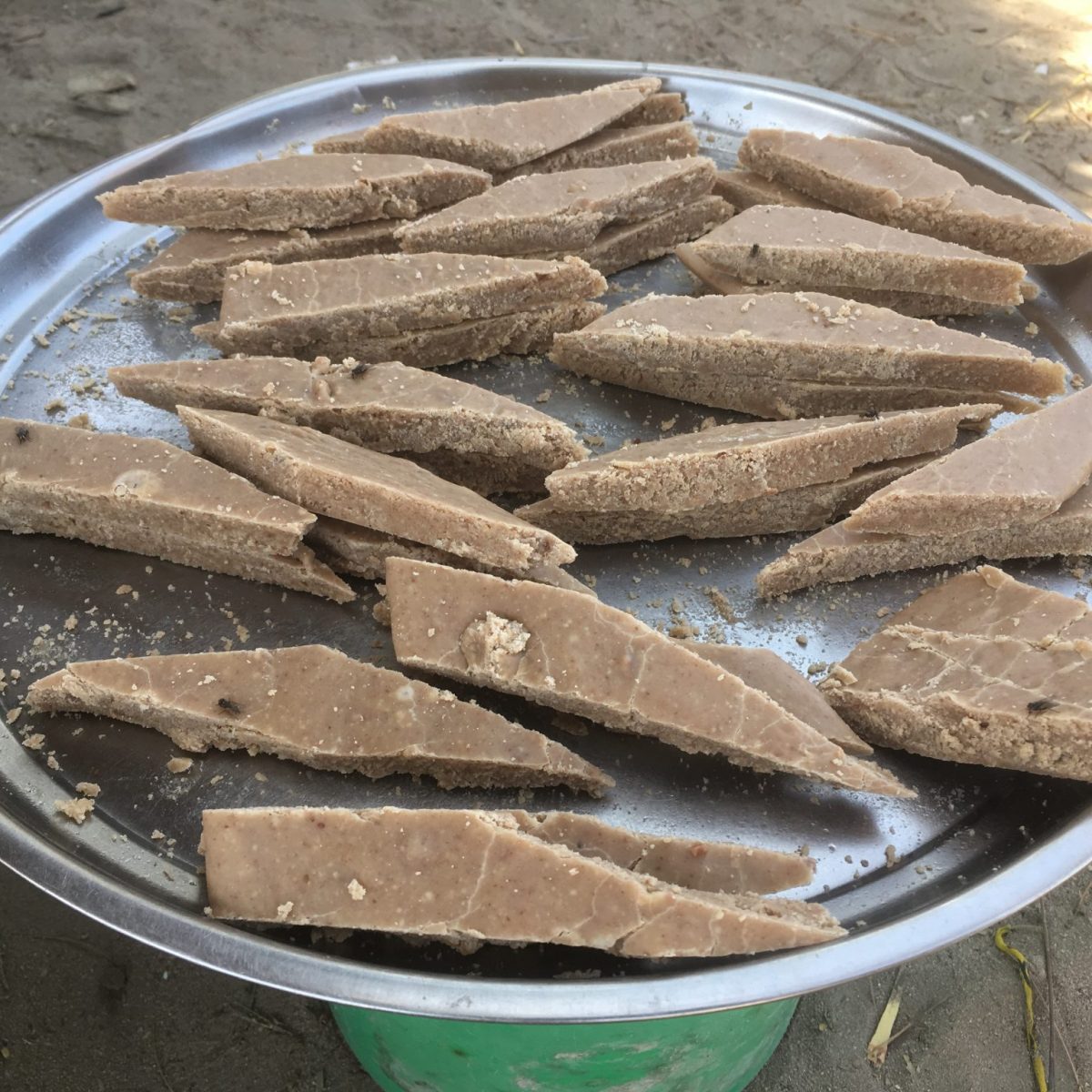 This peanut fudge is a great find if you have a sweet tooth like me. It’s a common street food snack in Mozambique and is one of my favorite traditional African desserts.

Not much explanation needed here. Just good ol’ rice and beans! Both rice and beans are staple foods in Mozambique, and you are almost certain to find this dish being sold at the pontoon. 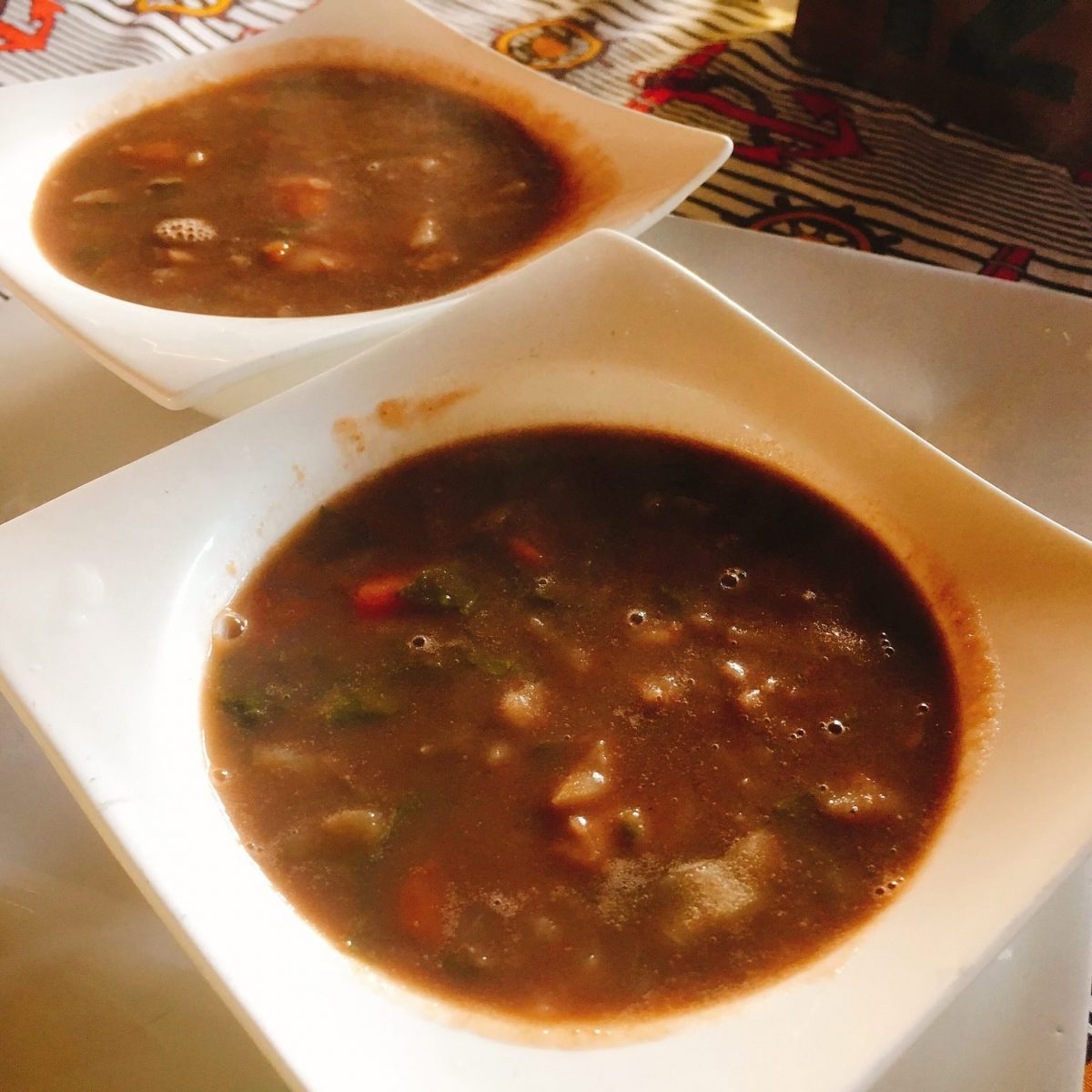 Again, this one is pretty self-explanatory. Soups are common in Mozambique, and even in the tourist restaurants you will often come across vegan versions, such as this vegetable soup. 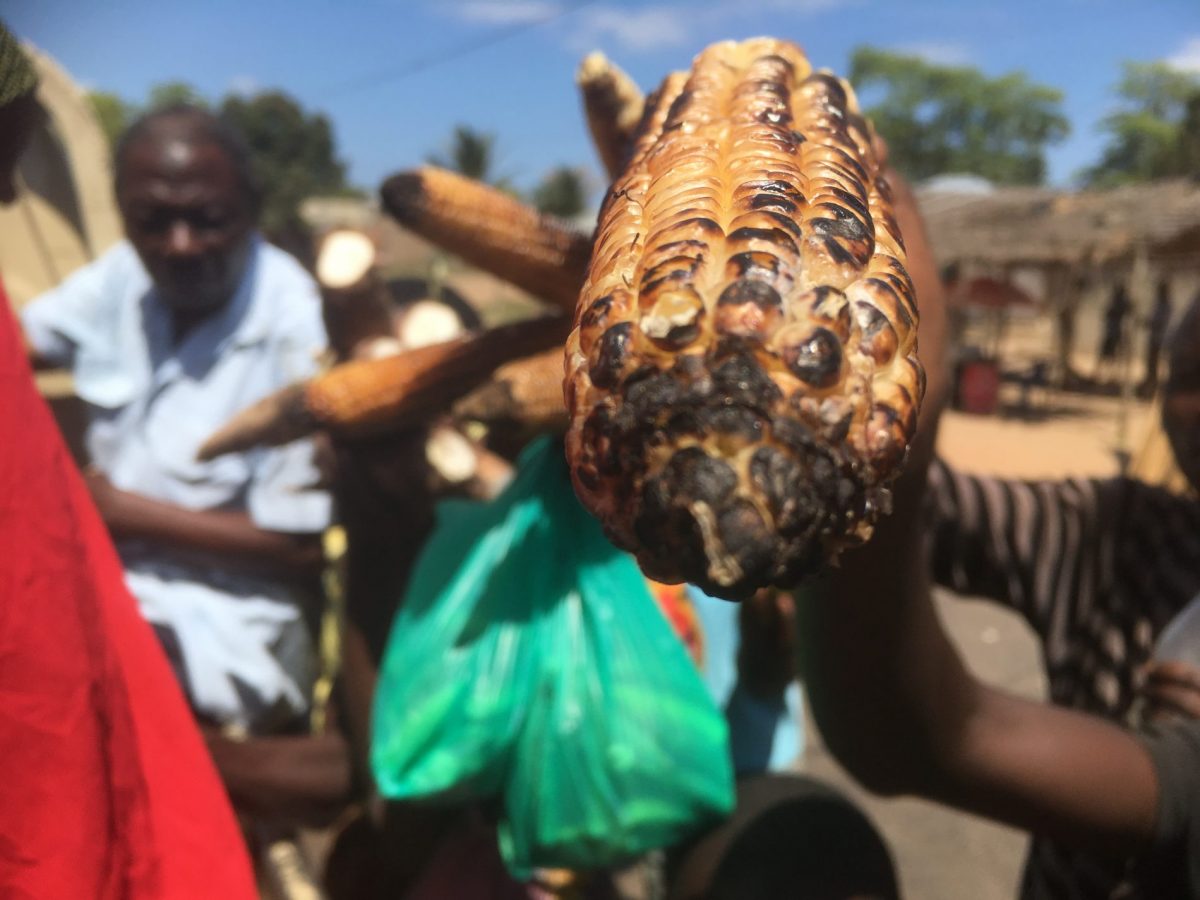 Corn on the cob roasted over hot coals. If you forgot to bring snacks for your bus journey, don’t worry. A local seller will probably offer you one of these through the bus window at some point! 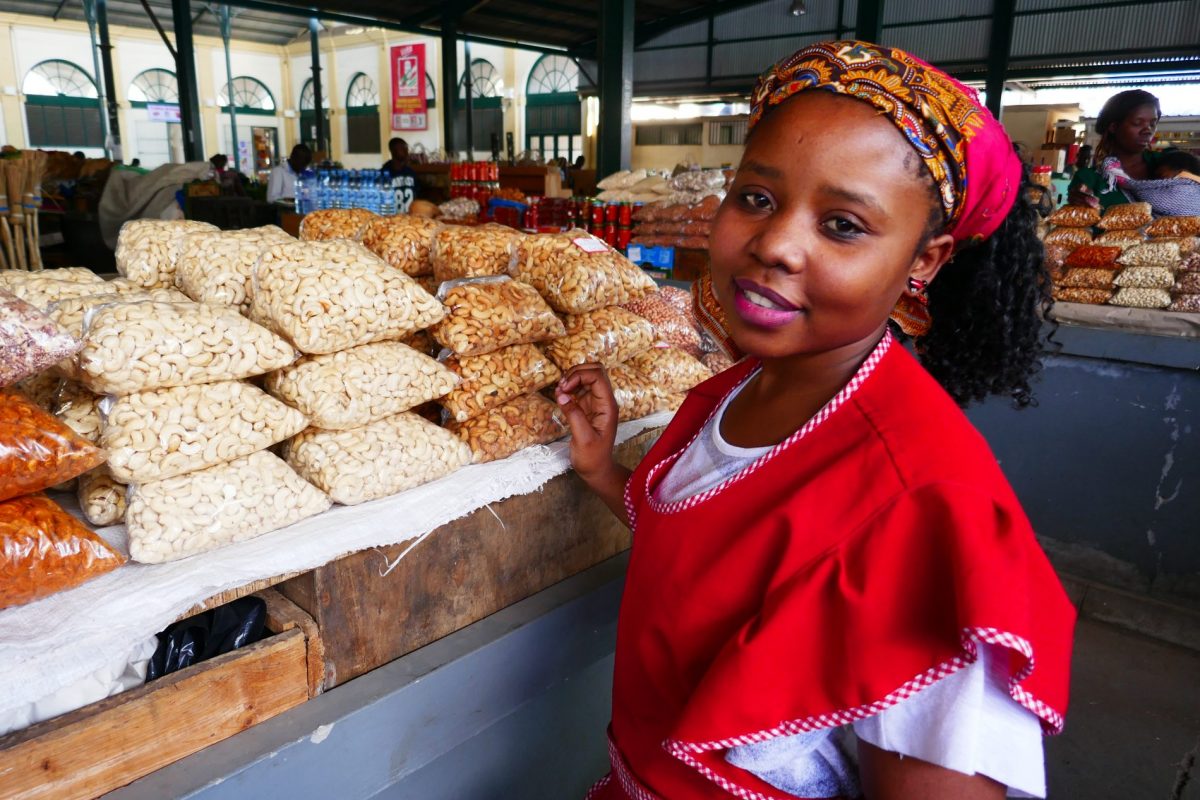 Mozambique used to be the world’s largest producer of cashews. Even though the nuts aren’t being produced on such a wide scale anymore, the trees still grow throughout the country.

You’ll see people selling bags of cashews on the side of the road and in the markets. They come in different flavors, too. If you like spicy food, try the ones with piri piri spices.

Remember when we talked about vegetable curry, and I said that that Mozambique Island had been influenced by many cultures, including Indian? Meet Exhibit B: the samosa.

You will see these sold all over the streets of Mozambican towns and cities. Some are filled with meat, but the ones filled with potato (batata) are usually vegan. If you buy them from a street vendor, they cost five meticais (less than a penny in US dollars). In restaurants, the price will be much higher (but still cheap by Western standards). 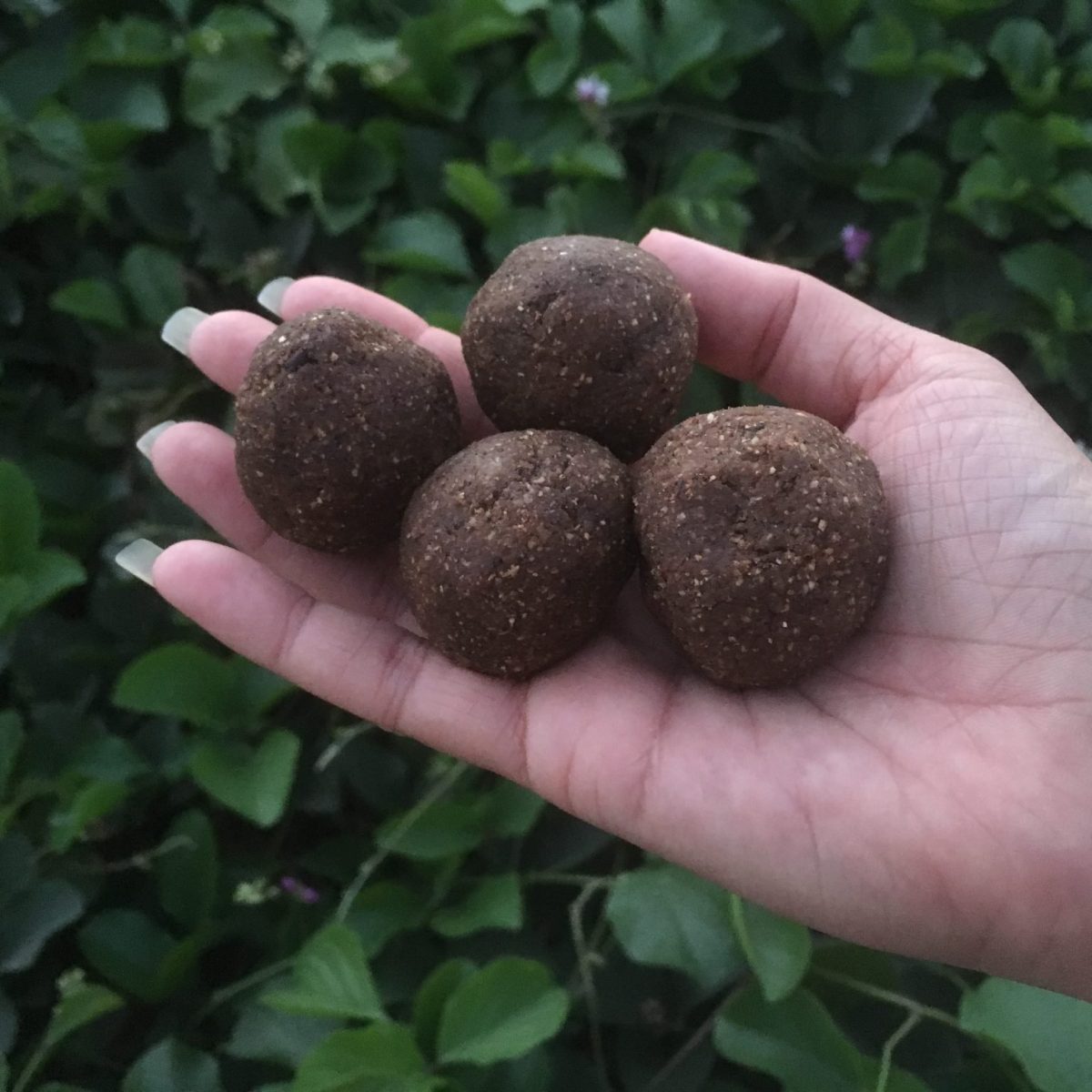 These dark balls are made of corn, peanuts and sugar. They’re sweet, but also a bit spicy at the same time. Lato has the texture of cookie dough, but it’s also a little bit grainy. Then again, that could have just been dirt. I’ll admit, this was not my favorite of all the Mozambican street food snacks I tasted. 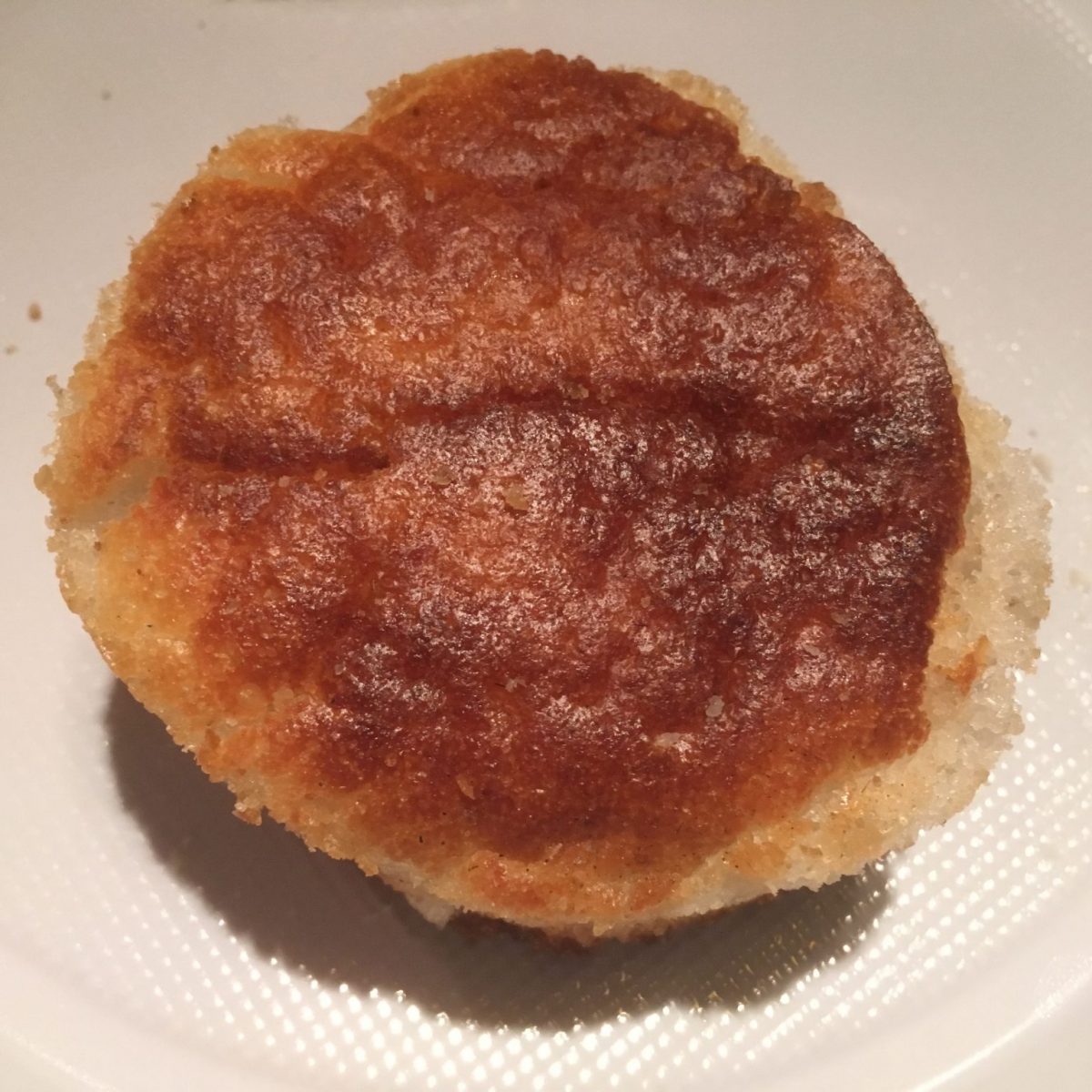 OK, now that we’re talking about dishes that I’m not super keen on, let’s get this one out of the way too. Mucate is a cake made from coconut and rice flour. It does taste like coconut, which I love, but I found the cake to be very dry. It would probably be nice with jam or some kind of spread. 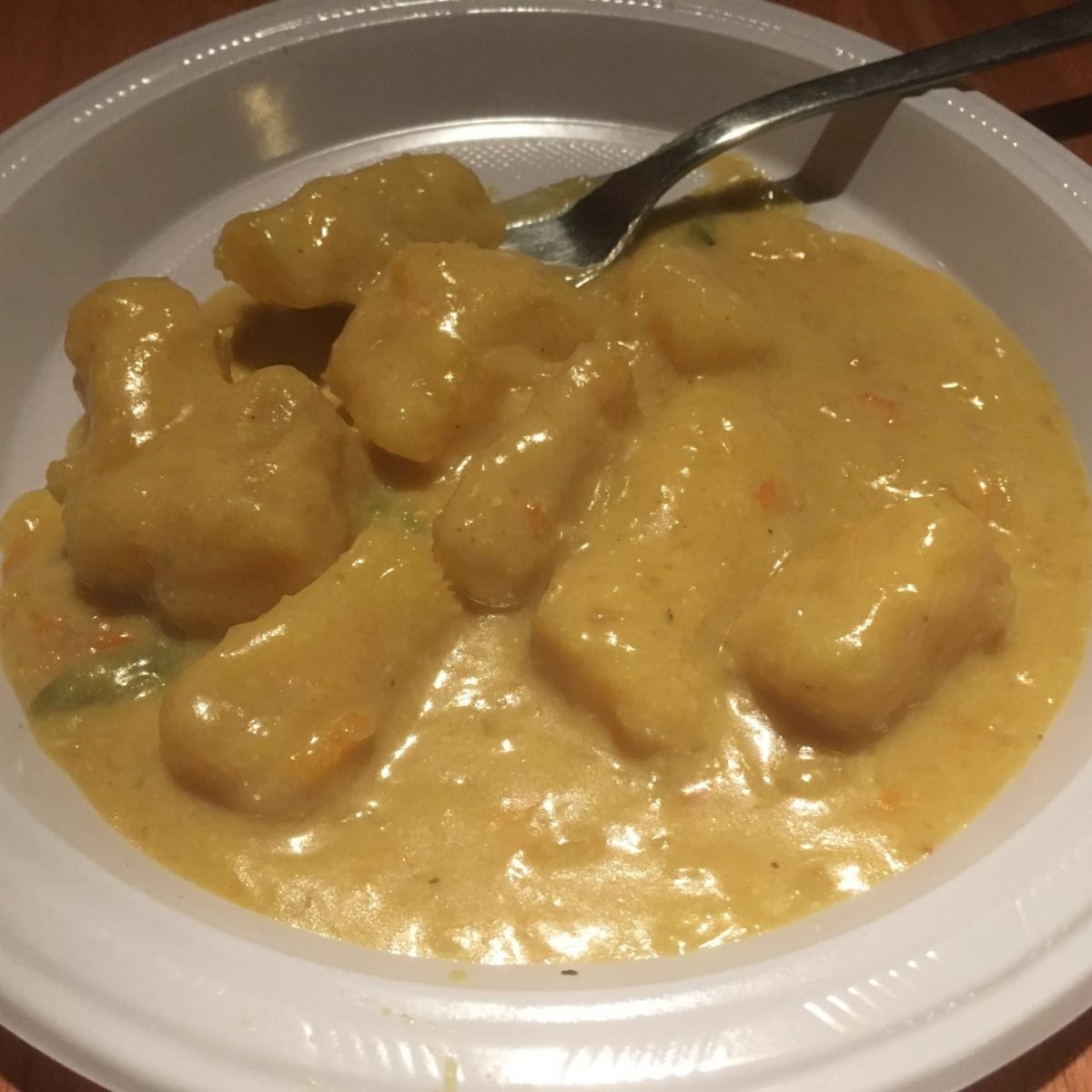 Whereas matapa is made from cassava leaves, this curry is made with chunks of cassava root. It’s typically eaten with rice or xima. 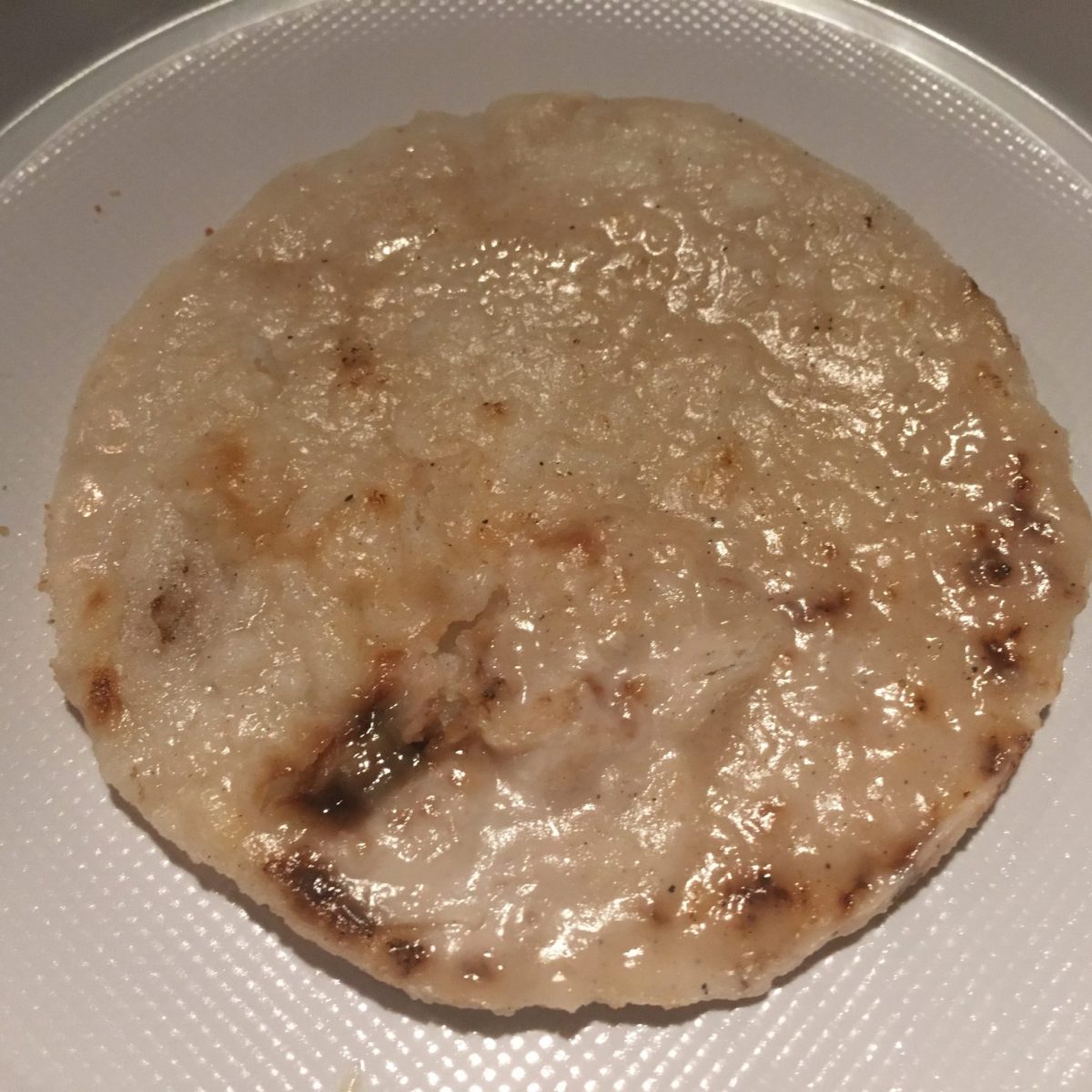 This is a round, flat bread, similar to a chapati, except that it’s made with rice and coconut milk. It would typically be eaten as an accompaniment to a meal.

So, there you have it. Twenty examples of tasty African food from Mozambique that is 100% vegan.

And if you’re wondering if there are any vegans in Mozambique, the answer is yes!

Here are two vegan Instagrammers from Mozambique who you should totally follow:
Mozvegan and Veganbique. Clever names, huh?

If you enjoyed this article, you might want to check out some of my other articles about Africa: 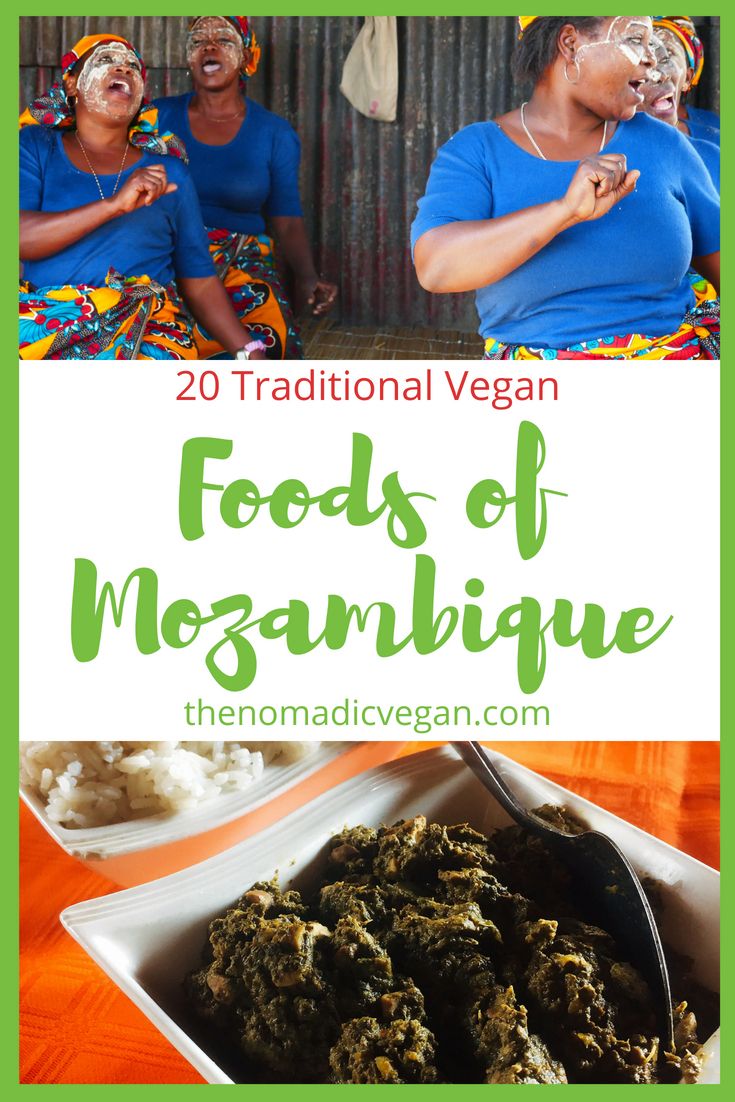