The Lazy Rhythm of Rethymno

The Great 40 Days has begun! Today is the first day of what is known in Greece as the Great Lent or the Great Fast, which is the 40 days leading up to Easter (the timing of which is calculated a bit differently in the Greek Orthodox liturgical calendar than in the Roman Catholic tradition).

For vegans, this is without a doubt the best time to visit Greece. Why? Because Greeks who observe Lent follow an almost vegan diet during this time (for a further explanation of "fasting food" in Greece see this post). This means that restaurants will have even more vegan options on offer than they do at other times.

So in honour of this special occasion, I am going to make a real effort to clear the backlog of posts about Greece that I have yet to publish. Remember this post, when I said I would soon be taking you to the charming seaside towns of Rethymno and Chania?

Yeah, that was over three months ago. My bad. I never meant to hold out on you for this long; other travels just kept getting in the way. So without further ado, let's get this 40 days started!

Rethymno is a sleepy, fairly attractive town in the west of Crete with an impressive fortress (though overall its beauty pales in comparison to Chania). The Lonely Planet guidebook had a listing for a vegetarian restaurant there called Soul Kitchen, and by the time we arrived I was quite hungry and really looking forward to digging in to a plant-filled lunch.

Unfortunately, we soon discovered that Soul Kitchen has closed down. Ultimately this was no problem, though, because even though there are no exclusively vegetarian or vegan restaurants in Rethymno, we still had an amazing lunch at Agrimia Restaurant, which serves “creative Cretan cuisine”. 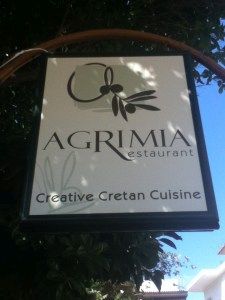 They had a separate vegetarian section of the menu, and I was happy to see that gemista (which can mean either stuffed tomatoes or stuffed bell peppers, or, in this case, both) was included in this section.

I had tried to order it at Yianni’s on Rhodes and had been told that it contained meat, but that was obviously not the case here. A quick check with the waiter confirmed that they normally sprinkle cheese over the top but were happy to leave it out. 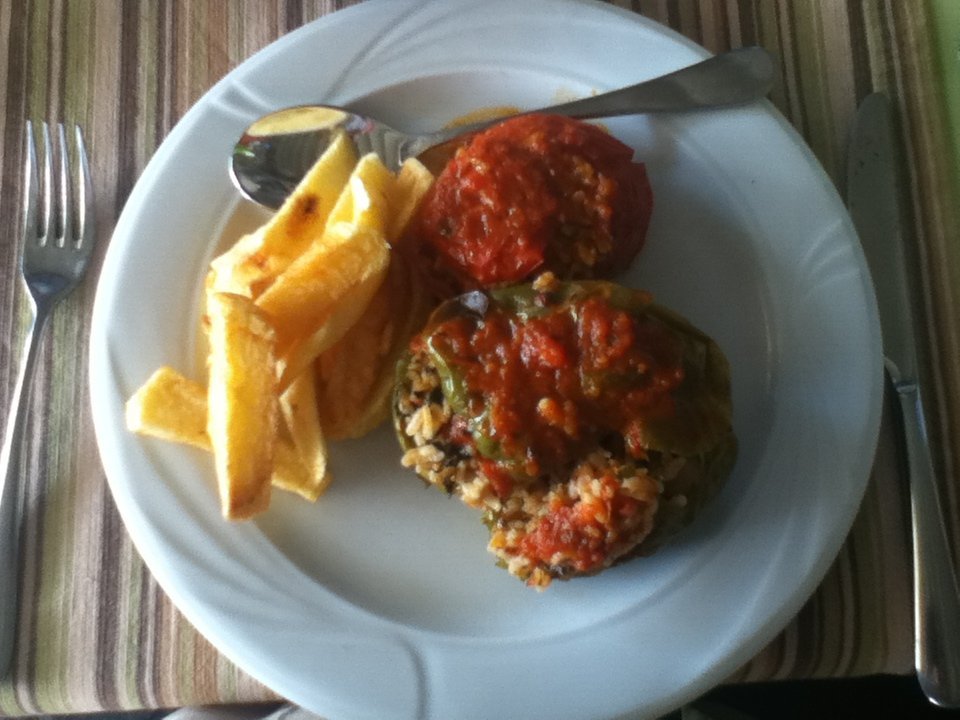 I also ordered the gigantes, which are the large white beans known in English as lima beans or “butter beans”, but don't worry, there is no butter in them, at least not the way they are prepared in Greece.

Rather, they are cooked in tomato sauce and Mediterranean spices and are melt-in-your-mouth delicious. I ordered them several more times during our Greece trip and was never disappointed. 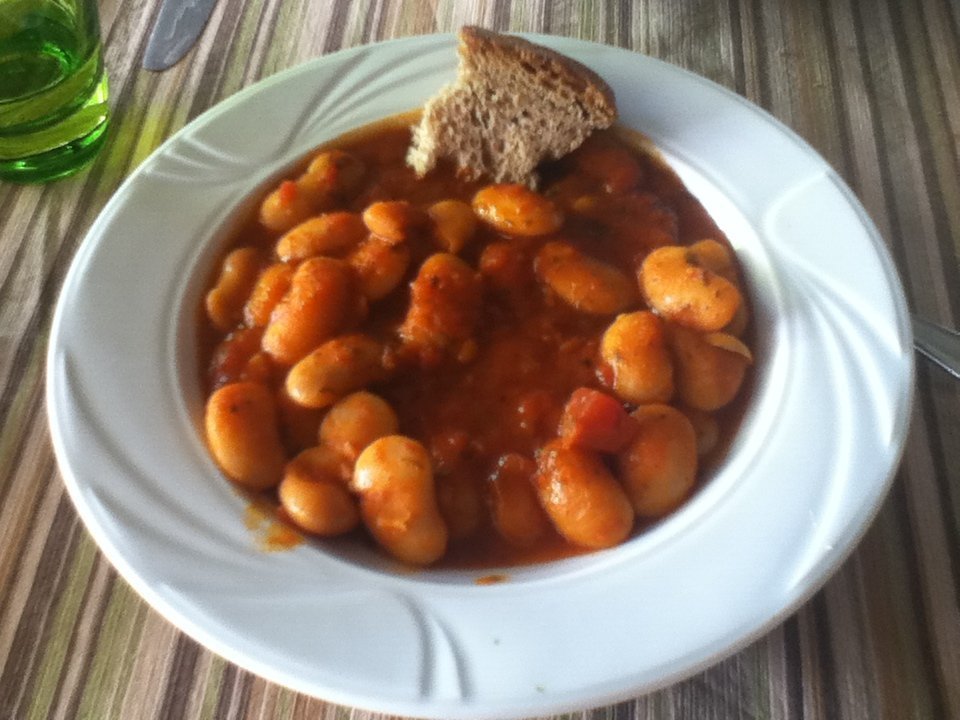 On Crete, it's very common for the server to bring out a complimentary dessert or digestif, or both, at the end of the meal. Usually the desserts are not vegan, but this time it was watermelon and honeydew melon with a shot of raki, so it was great to be able to partake. 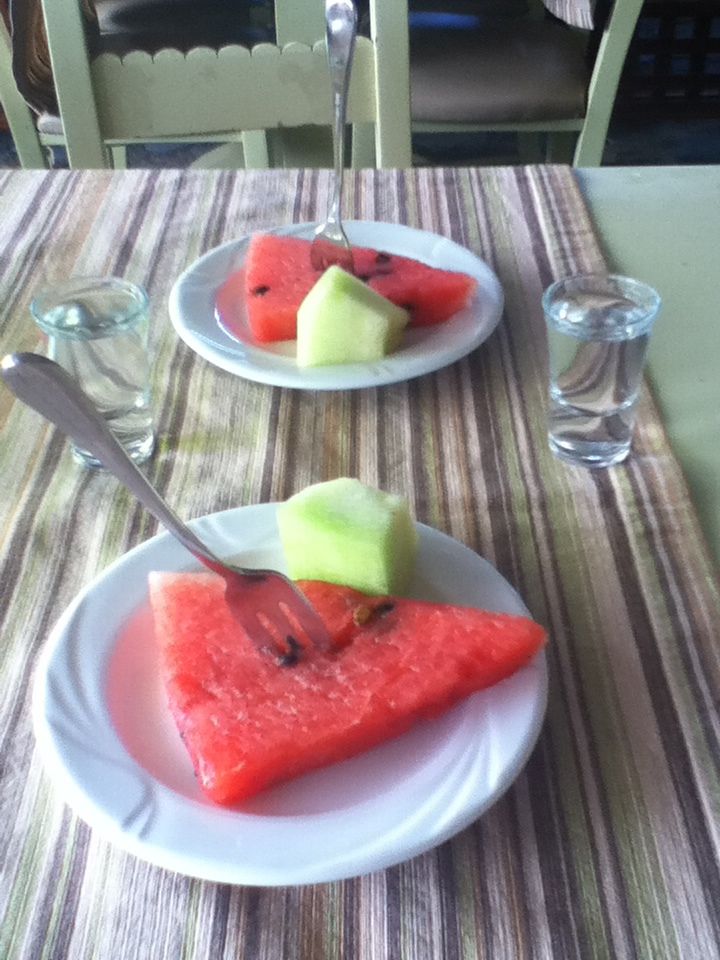 This was my first taste of raki, which is a very strong, clear firewater, much like the grappa drunk in Italy. I found it pretty hard to get down; this is one local specialty that I didn't take home as a souvenir.

Ouzo, on the other hand, is quite pleasant if you like liquorice, and in Rhodes we also sampled a liqueur made from the resin of the mastic tree that was really quite delicious.

In any case, all of this combined made for a very large and filling meal.To be honest, I felt a bit like a stuffed tomato myself as I waddled out of the restaurant! 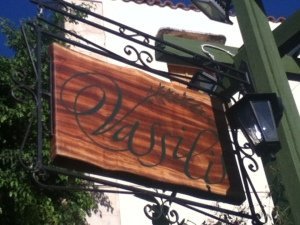 Earlier in the day we had noticed an attractive-looking restaurant called Vassili’s near our accommodation and decided to head there for dinner.

I was still feeling pretty full from my lunch, so I chose a light, Mediterranean-style meze meal of artichoke hearts and Cretan boiled peppers, which were served with toasted garlic bread, olive oil and a tomato-based dipping sauce. This really hit the spot; the peppers were sweet and not very spicy, even though they did look a bit scary when the waitress first brought them out.

This meal also ended with a plate of melon and some raki, and not just two shot glasses but a whole bottle! I was done after one shot and left the rest to Nick (Please excuse the very poor photo quality; this was before I got a decent camera!). 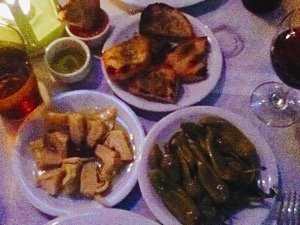 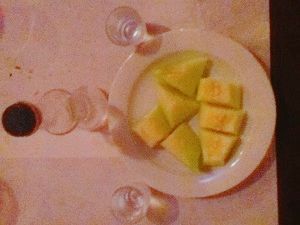 The owner of our accommodation recommended another restaurant called Stella’s Kitchen that we did not have a chance to try. We passed by it the next day before we left and they did indeed seem to have a large range of vegan options, including some dishes I had heard about and was eager to try. 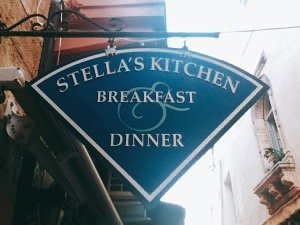 I was sorry that we weren't staying long enough to enjoy another meal in Rethymno. If you do have a chance to eat there, please leave a comment and let me know what it was like!

On our last morning in Rethymno we took a walk around town and stumbled on this bakery:

The woman behind the counter didn’t seem to speak any English (quite a rarity in Greece), but was this a problem? Nope, not at all!

I only picked up about five or six words of Greek during our trip, but luckily one of them was the all-important magic word, nistisimo. When I said it she pointed me to her spanakopita, which I liked even more than the one from Everest in Heraklion. 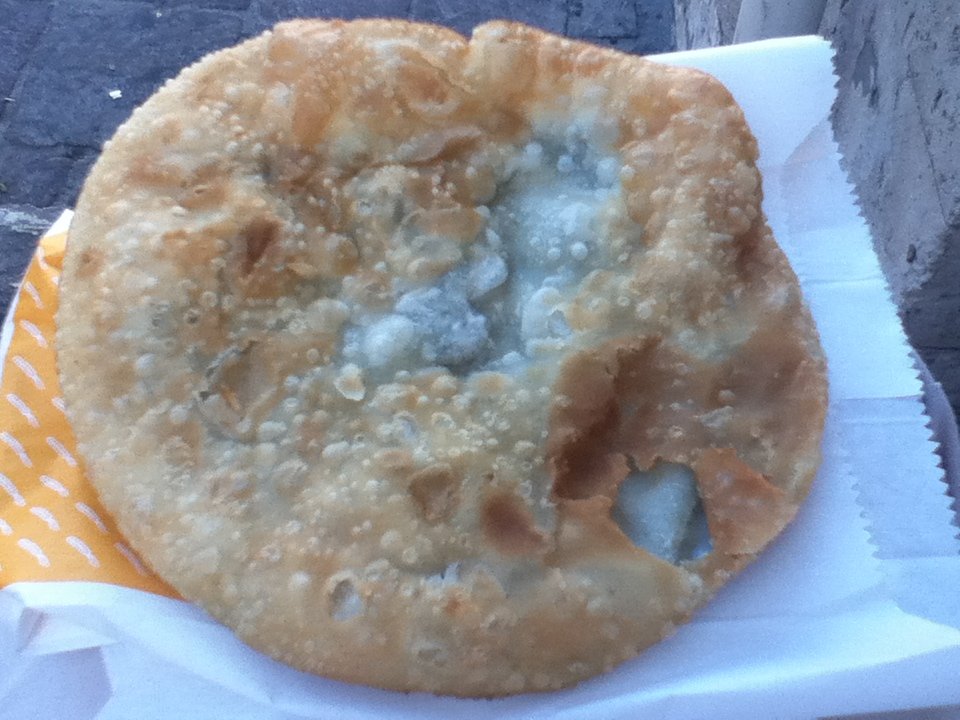 The pastry used in this one was a different texture and seemed much less greasy. I may not have been able to make my daily green smoothie, but with spanakopita I could still get my greens first thing in the morning while travelling in Greece!

As you can see, like in all of Greece, it's easy to be a vegan in Rethymno!