Why Haus Hiltl is the Best Vegetarian Restaurant in Zurich 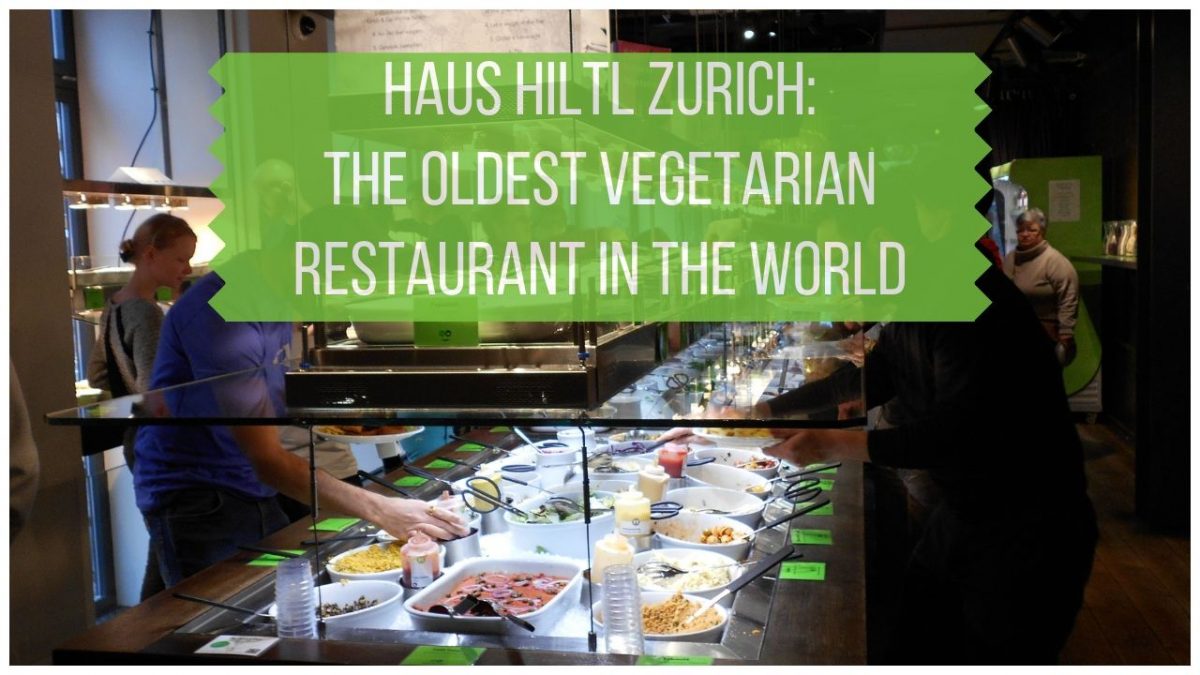 The Oldest Vegetarian Restaurant in the World

You probably don't think of Switzerland as the cradle of vegetarianism, but did you know that it's actually home to the longest-running vegetarian restaurant in the world?

That's right, Hiltl Restaurant in Zurich has been serving vegetarian meals for more than 120 years and holds one of the prestigious Guinness world records as the oldest vegetarian restaurant. It first opened its doors in 1898 under the not-so-sexy name "Vegetarian Home and Abstinence Café". 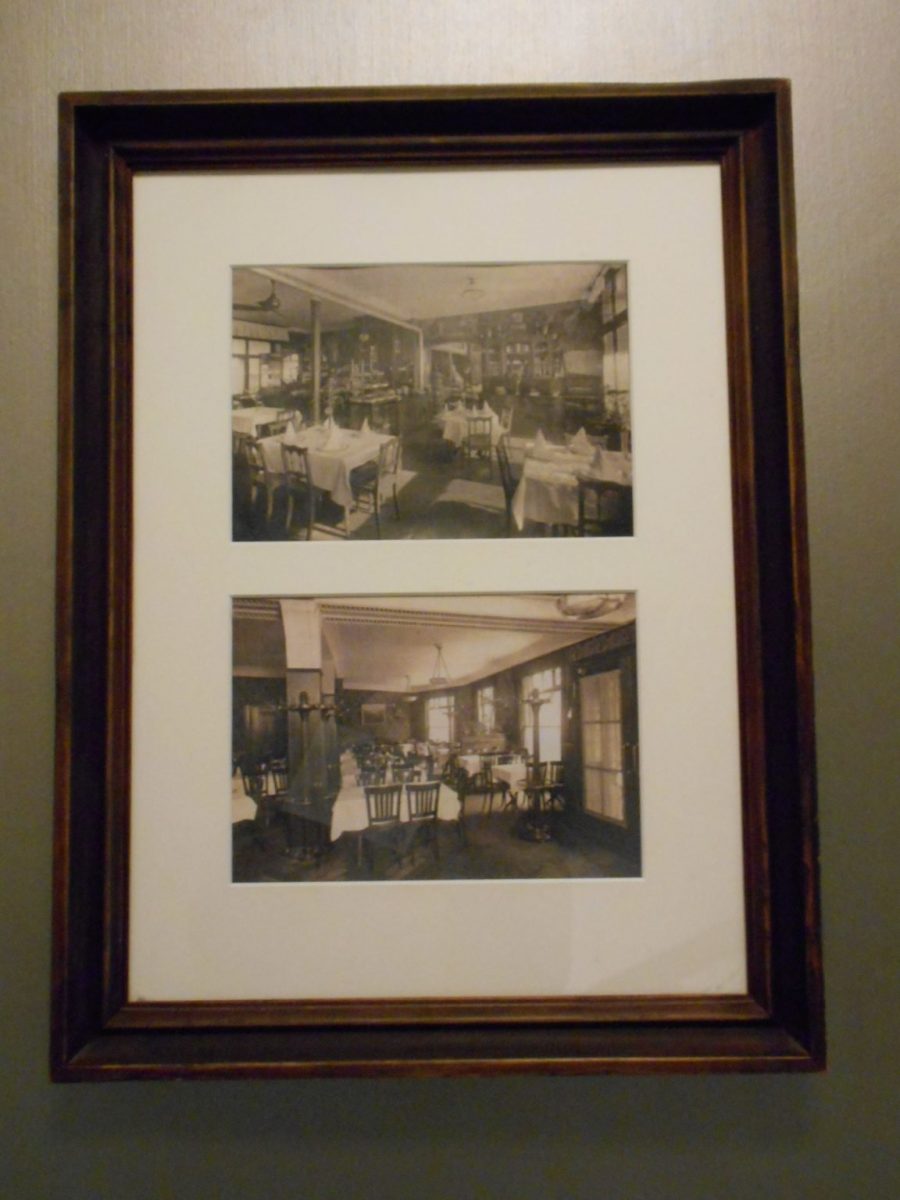 Whether it is really the oldest vegetarian restaurant in the world or not is perhaps up for debate. There are certainly plenty of restaurants attached to Buddhist temples in Japan, China and other Asian countries that have been serving up vegetarian, mostly vegan food for a VERY long time.

But I suppose none of them have been documented as having operated continuously for longer than the Hiltl in Zurich. In any case, we can say for sure that Haus Hiltl was the first vegetarian restaurant in Europe.  Anyway, back to our story of how Hiltl was founded.

In 1901, a traveling German tailor named Ambrosius Hiltl fell ill with rheumatoid arthritis and was told by his doctor that he would die an early death unless he eliminated meat from his diet. Hiltl followed his doctor's advice and quickly recovered, which convinced him of the merits of vegetarianism.

In 1905, he took over as manager of the struggling vegetarian café that had opened in Zurich a few years earlier, and four generations later the Hiltl family is still serving up delicious vegetarian food. Of course, things have changed a bit over the years. 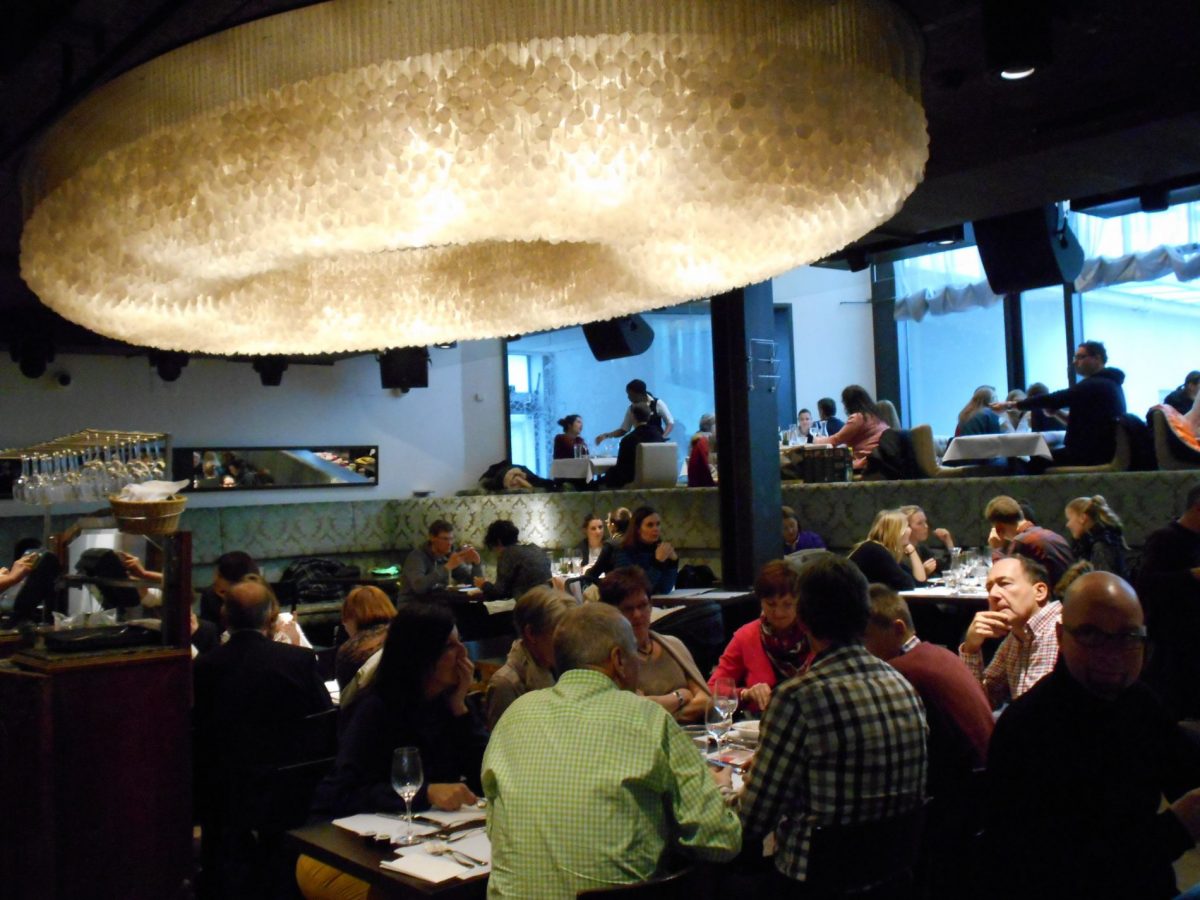 Hiltl vegetarian restaurant Zürich. The décor has changed a bit since the old days!

While there there used to be an à la carte menu, nowadays everyone comes here for the Hiltl buffet. And really, how could you pass up this amazing spread?

In addition to the incredible variety, everything in the buffet is very clearly marked, so it's easy for vegans to navigate. In fact, this has to be the most extensive labeling system I've ever seen. No matter what allergy or dietary restriction you may have, I'm pretty sure Hiltl has you covered.

Don't go too crazy though, because sadly this buffet is not all-you-can-eat. Rather, you fill up your plate and then weigh it to find out how much you will pay. This is Switzerland after all, so it's not exactly cheap by most standards.

How to Eat for Less at Hiltl Zurich 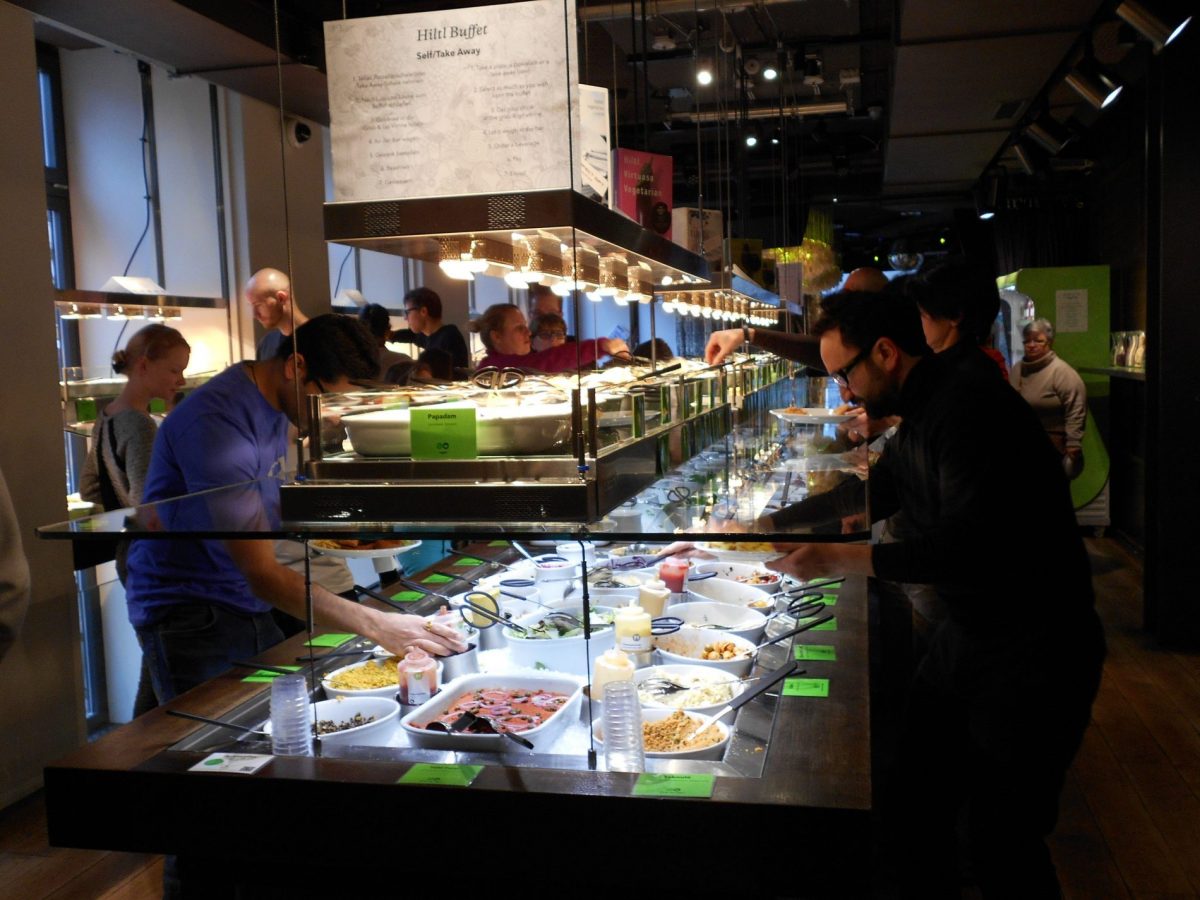 Hiltl Zürich buffet. With so many delicious-looking dishes, it's easy to get carried away.

The Haus Hiltl buffet price is 4.50 CHF per 100 grams, which will probably come out to about 35 CHF per person, depending on how much you eat. Here are a few tips to keep your bill down:

1. Do a walk through first and take a look at all the options before deciding which ones you really want. Otherwise, with more than 100 hot and cold dishes on offer, you could find yourself with an overflowing plate before you even make it to the end of the salad bar.

2. Don't buy drinks. Unless you want to, of course, but there's a tap near the weigh station where you can get all the tap water you want, for free.

3. Instead of using rice as your base for all the delicious curry sauces, try papadums instead. They weigh almost nothing.

4. If you're really, REALLY hungry, the price of the Hiltl buffet actually maxes out at 57 francs. In other words, if your bill has already reached 57 francs then you might as well keep stuffing your face, because everything else will be on the house.

Nick and I tried really hard to limit ourselves. We managed to stick to one plate and one small dessert bowl each, and our bill came to about 70 francs for the two of us. This is on the high end of what we normally pay to eat out in Switzerland, but it would still not be considered expensive here. 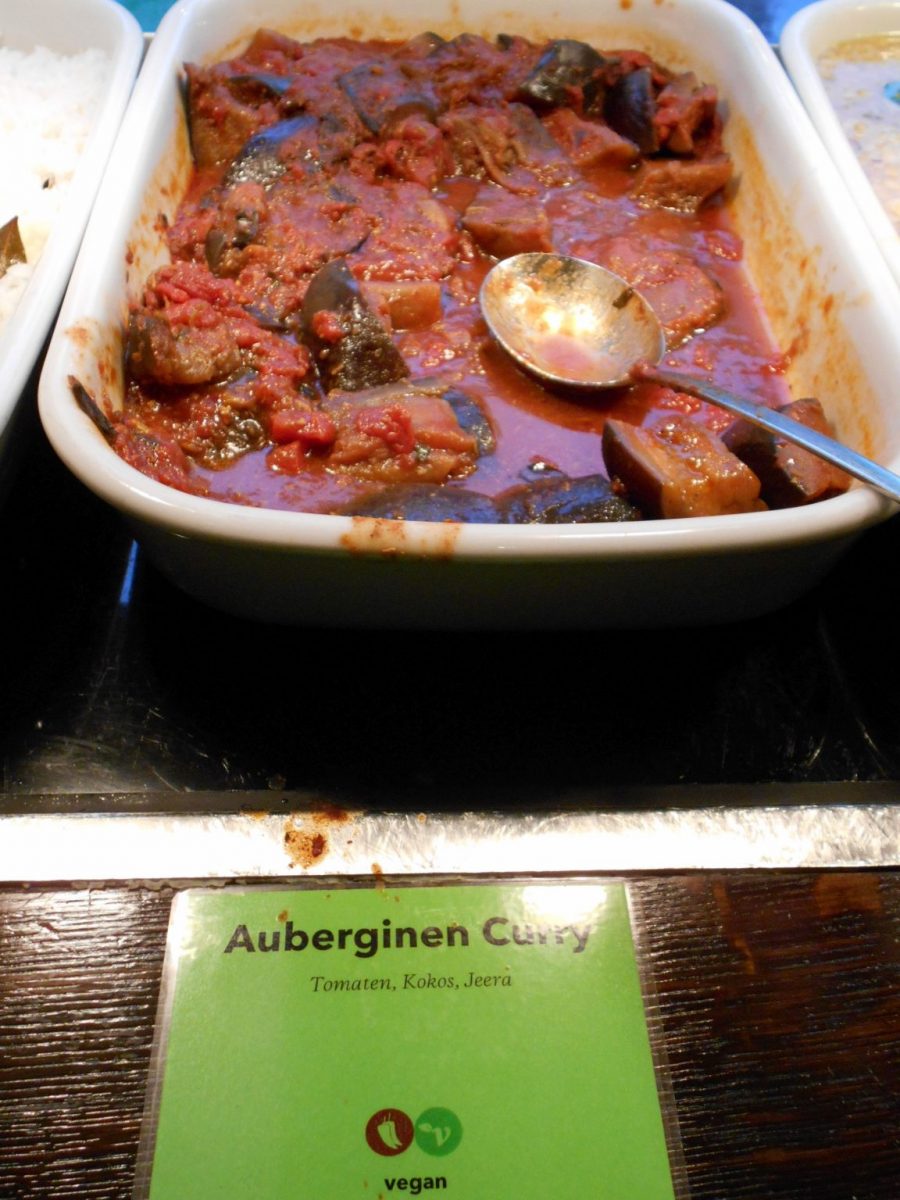 This aubergine curry at Hiltl Zurich is just one of many Indian dishes on offer.

There were so many amazing curries on offer that I ended up with an almost entirely Indian meal.

I later discovered, upon browsing the restaurant's website, that Hiltl's expertise in Indian cooking goes back more than 60 years.

In 1951, Margrith Hiltl traveled as an official Swiss delegate to the World Vegetarian Congress in Delhi and quickly fell in love with Indian cuisine, which she soon added to the Hiltl menu.

The kitchen staff were not very impressed, however. They were accustomed to vegetarian Swiss food, and they simply refused to cook these foreign dishes.

So, Margrith Hiltl made the Indian vegetarian dishes herself in her private kitchen, initially only on special order.

Word quickly spread, however, and more and more Indian guests began coming to Hiltl. At one point, Swissair even asked Hiltl to provide meals for its Indian passengers! So delicacies like navratan korma and mango curry quickly became fixtures on the menu. Oh yes, do NOT miss out on the mango curry! 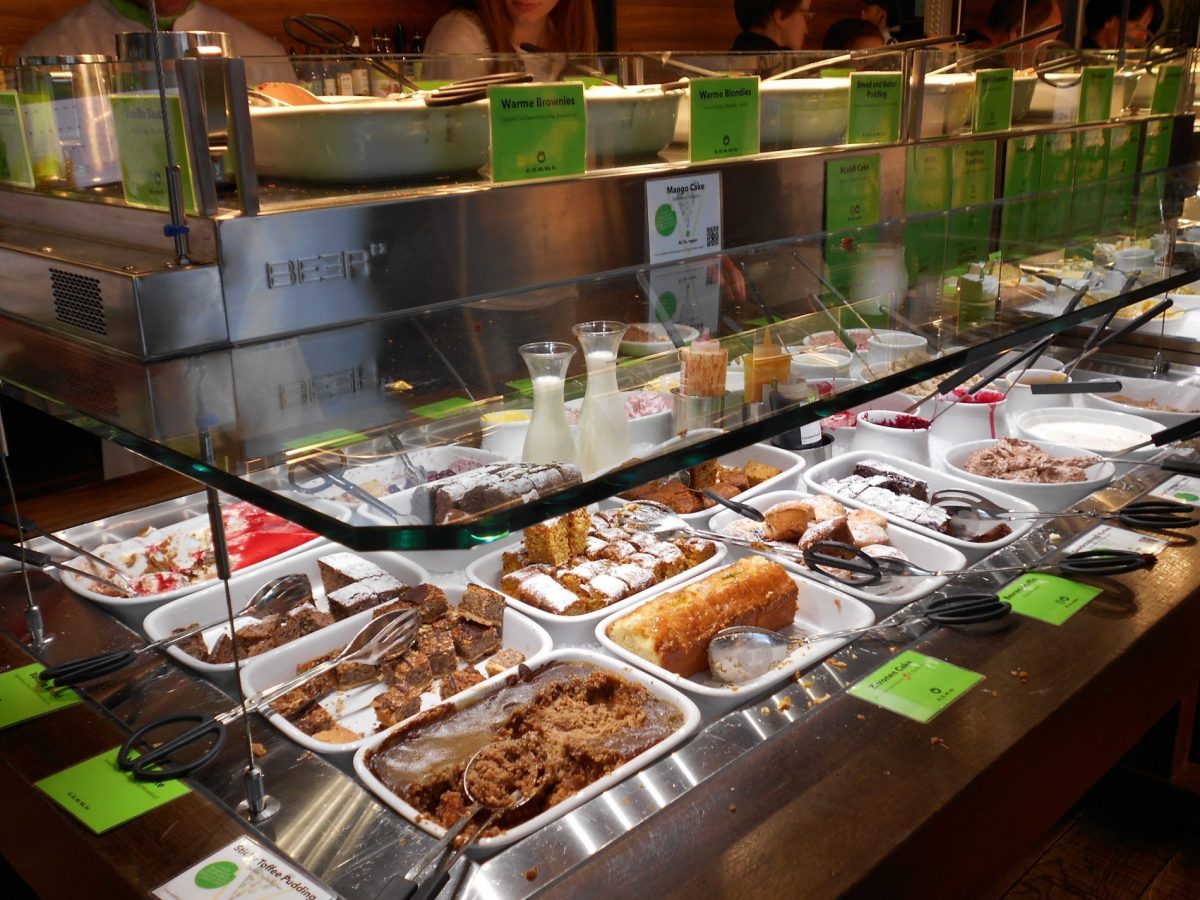 The dessert bar is no less tempting and includes plenty of vegan choices. I had a VERY hard time deciding, but I eventually limited myself to three desserts (pictured from left to right): sticky toffee pudding, winter tiramisu, and mango mousse.

They were all amazing, but the winter tiramisu was the winner. First of all, I should say that this dessert is nothing like tiramisu, and I really wish people would stop misusing that name.

It means "pick me up" in Italian, so if there's no coffee in your tiramisu, well then it's not tiramisu, is it? That being said, this dish was heavenly and deserves a name of its own, like Cozy Christmas Dream or Winter Spice Delight.

The Best Vegetarian Restaurant in Zurich 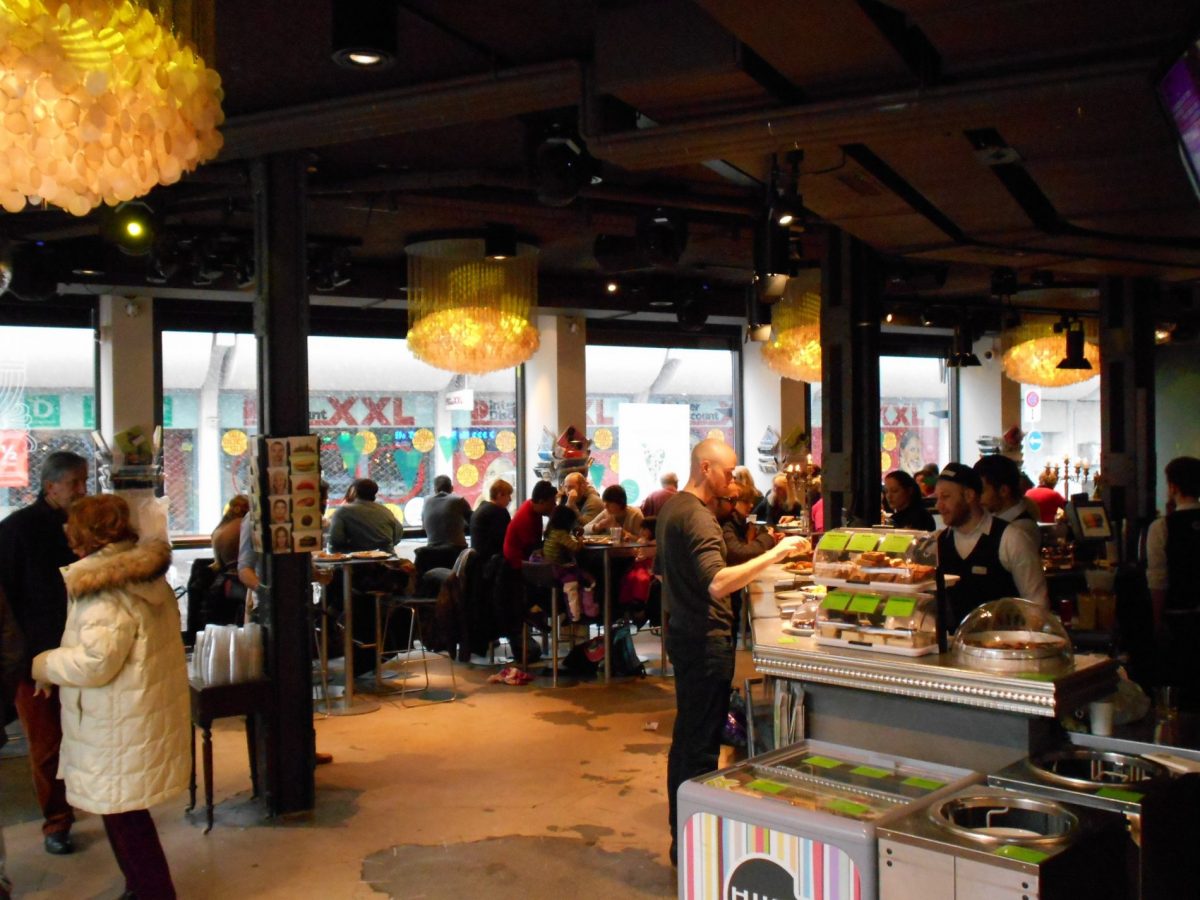 Hiltl vegetarian restaurant Zurich is incredibly popular, and it's easy to see why!

The vegetarian and vegan movement in Switzerland has come a long way since Haus Hiltl was founded more than 120 years ago. There are now more than 30 vegan and vegetarian restaurants just in the city of Zürich alone.

But Hiltl, along with Bona Dea in the Mail Railway Station, is still considered by most to be the best place in town for a vegan or vegetarian meal. Just take a look at some of the reviews on sites like HappyCow or Google Maps, and you will see lots of positive feedback from vegans, vegetarians and meat eaters alike.

And unlike most restaurants in Switzerland, Haus Hiltl has extended opening hours. They open at 6am every single day of the week, and they stay open the whole day (whereas many places close between lunch and dinner). Closing time is between 10 pm and midnight, depending on the day of the week.

The Many Locations of Hiltl and Tibits Zurich 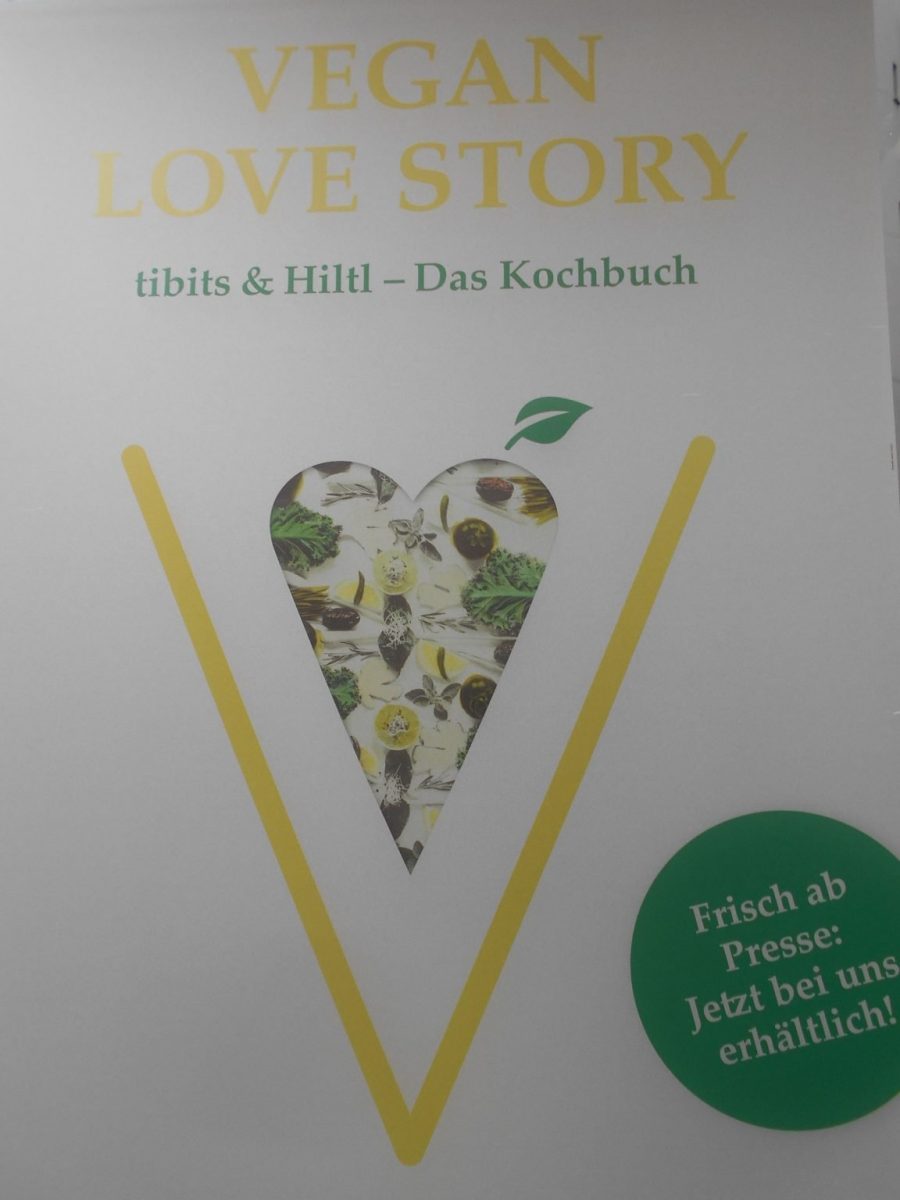 The Hiltl empire is constantly expanding too. When I first visited the restaurant, back in 2015, there were four Hiltl locations. Since then, that number has expanded to eight locations in Zurich alone!

The original restaurant is known as Haus Hiltl and is located on Sihlstrasse, which is in a part of the old town that is known simply as "City" and is a very central area in Zurich. The new Hiltl Sihlpost location inside the post office building is even more convenient. You'll find it right next to the Zurich main station.

And Hiltl Dachterrasse is a green oasis overlooking the rooftops of Zurich. It's definitely the one to choose on a sunny day! On weekend nights, Haus Hiltl transforms into Hiltl Club, which is a popular nightlife spot and the first fur-free nightclub in Switzerland.

In addition, Hiltl is also part of a joint venture called Tibits that has locations in several other Swiss cities, including Basel, Bern, Lausanne, Lucerne, St. Gallen and Winterthur, in addition to three Tibits Zurich locations. And there’s even a Tibits London in the UK!

Tibits follows the same buffet model as Hiltl, but just on a slightly smaller scale. Prices are generally a bit cheaper than Hiltl too. For example, the pay-by-weight Sunday Hiltl brunch costs 4.50 CHF per 100 grams, whereas at Tibits it's 4.20 CHF.

The concept of Tibits is a high-class, fast-food vegetarian restaurant. Three brothers originally came up with the idea, and then they enlisted the help of the Hiltl family, so Tibits is in fact part of the Hiltl brand.

The names are sometimes even used interchangeably. You may hear people talk about Hiltl London or Hiltl Lausanne, when what they really mean is Tibits.

Have you ever eaten at a Hiltl or Tibits in Zurich or another city? Or is there another vegetarian restaurant in Zurich that you would recommend? Share it in the comments below! 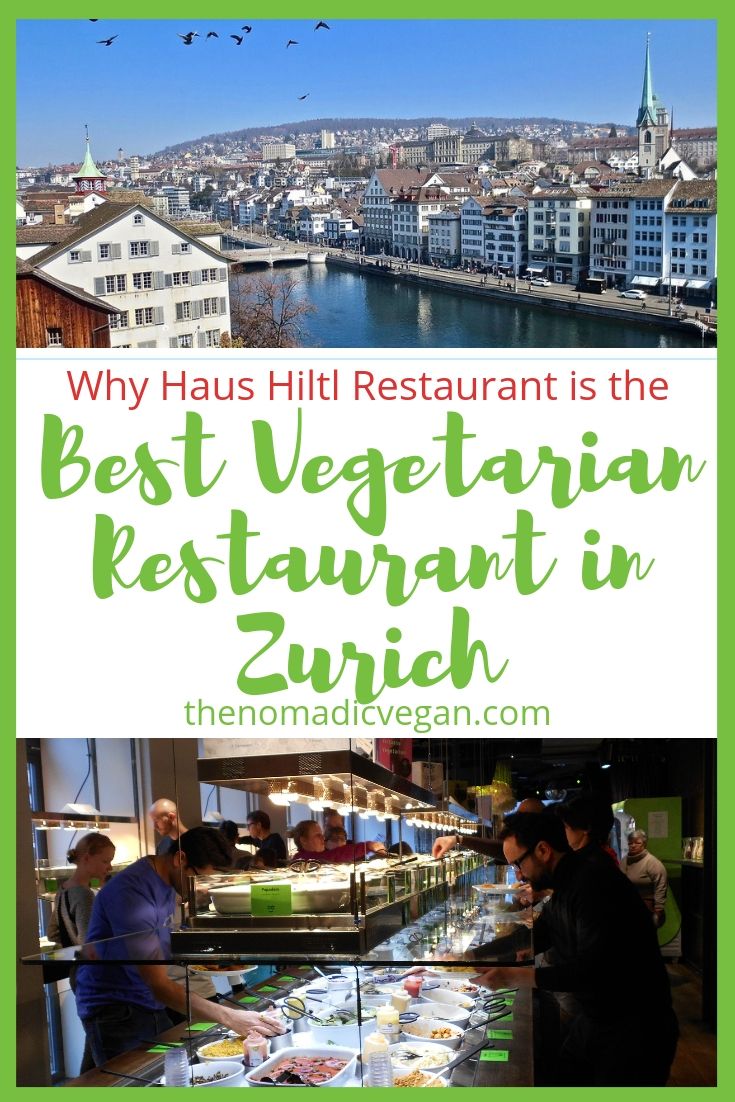