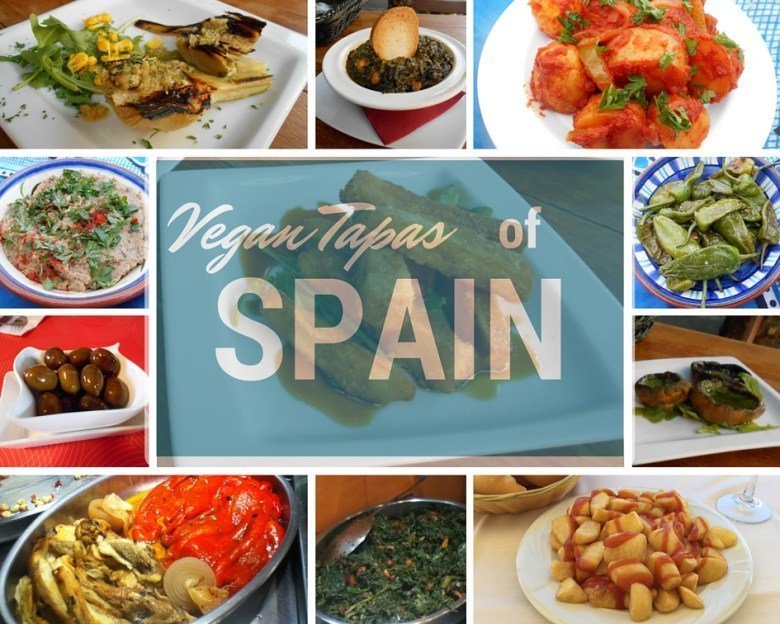 These small, appetizer-sized dishes are not only a quintessential part of Spanish cuisine and culture, they are also a vegan traveller’s best friend.

Now, travelling in Spain is actually not nearly as difficult as most people imagine. There are, in fact, quite a few naturally vegan dishes in Spanish cuisine. If you don’t believe me, just have a look at my Ultimate Vegan Guide To Spain.

You’ll notice that the largest section of that guide by far is the vegan tapas section. Why is that? Well, it’s true that many Spaniards don’t feel that a meal is complete if it doesn’t include meat. But the great thing about tapas is, they aren’t supposed to be a whole meal!

This means that there are a bunch of tapas dishes that are purely plant-based, making it easy to create a meal out of only vegan tapas.

Now, you never know which vegan tapas you’re going to find in any particular tapas bar, and some places might only have two or three. But that’s OK! Because much of the fun of going out for tapas lies in turning the evening into a “tapas crawl”.

The concept is much like a “pub crawl”, where you go from bar to bar and stay just long enough to have a drink in each one. Except, of course, in this case we’re both drinking and eating.

So if you arrive at a tapas bar (called a tasca in Spanish) and don’t see many vegan tapas on offer, just grab one or two and then move on to the next bar, which will likely have a completely different tapas menu.

To see how this might play out, check out this video where I take you on a tapas crawl through the streets of Zaragoza!

And to give you some ideas of vegan tapas to keep an eye out for on your own tapas crawl, my friends over at Spain-Holiday.com have put together this gorgeous infographic of the Top 8 Vegan Tapas!

These are definitely not the only vegan tapas available in Spain, but they are some of the most common, and they also happen to include some of my favourites. You’ll even see one of them make an appearance in the tapas crawl video above.

If you’re trying to avoid gluten, you’ll be happy to know that almost all of these vegan tapas are also gluten-free! Gluten and other allergens are clearly labelled next to each tapa on the infographic.

And as an added bonus, here’s a quick and easy video recipe, so you can celebrate World Tapas Day by preparing one of these vegan tapas dishes for dinner tonight!