Going on a Tour of Namibia as a Vegan 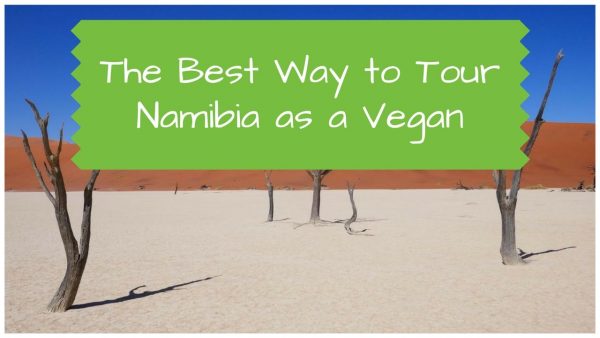 Namibia is one place where taking an organized tour really makes sense, even if you’re the type of person who doesn’t normally go on tours.

The country is largely made up of two deserts — the Namib and the Kalahari — and is one of the most sparsely populated nations on earth. So, as you might imagine, public transport is thin on the ground and does not cover most places of interest to tourists.

Unless you’re willing to drive through the desert in your own vehicle (in which case you’d better take plenty of water and gasoline and know how to change a flat tire), going on an organized tour of Namibia is really your only option.

Fortunately, this doesn’t have to mean seeing Namibia through the tinted windows of a 40-seater coach full of sunburned tourists.

No matter your budget, your travel style, or your dietary choice, you will find a tour of Namibia to suit you.

Nick and I booked our tour of Namibia through the Cardboard Box Travel Shop, who hooked us up with Wild Dog Safaris. Their camping tours sounded like the perfect fit for us, so we were thrilled when they said they could provide vegan meals on any tour of Namibia.

If you're planning to self-cater your own camping trip, here are some easy vegan meals you can prepare at any campground. 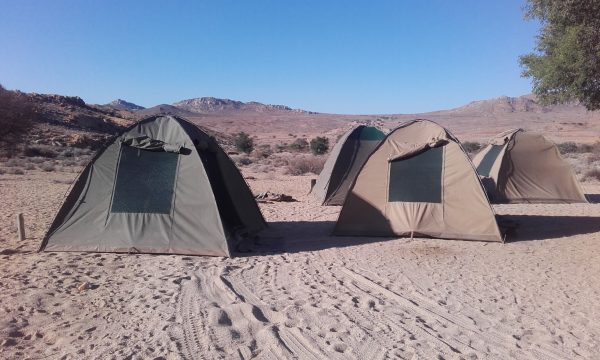 We opted for a camping tour, but you can stay in hotels on your tour if you wish.

In the end, we booked two different tours with them – the 7-day Southern Swin﻿g and the 3-day tour to Etosha National Park. On these two tours, we had two very different experiences.

On the Southern Swing tour, everything went pretty much perfectly. We were lucky to be in a small group of just seven travelers. Everyone got along really well, and our guides Markus and Stevie were fantastic. 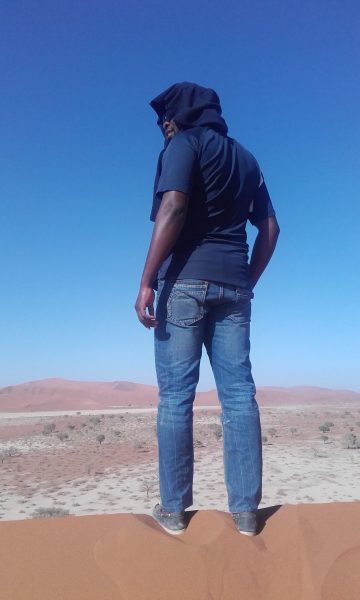 Markus keeping an eye on things from atop a sand dune

The top highlights of the trip for me were:

Fish River Canyon, the second largest canyon in the world.

Second only to the Grand Canyon, of course, and filled with scenery that is strikingly similar to the more famous Arizona landscapes. 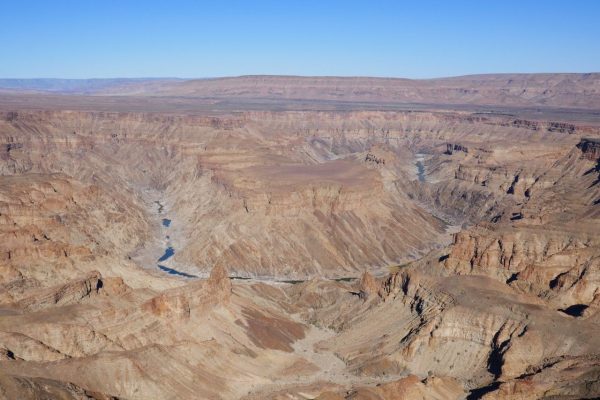 The spooky desert scenery at Deadvlei.

Where trees that have been dead for hundreds of years rise up out of earth, surrounded by towering red sand dunes. 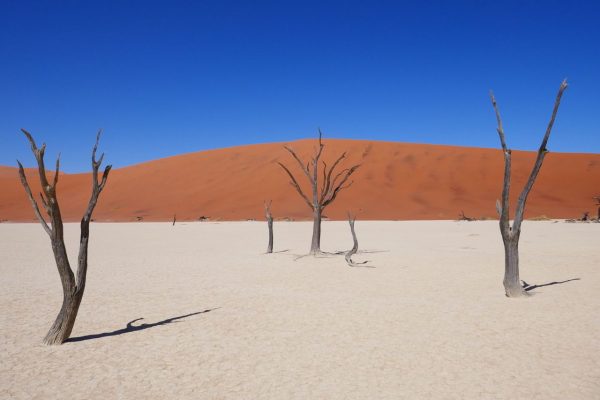 These trees have been dead for hundreds of years!

Which we watched every night while sipping bottles of Savannah Dry cider. 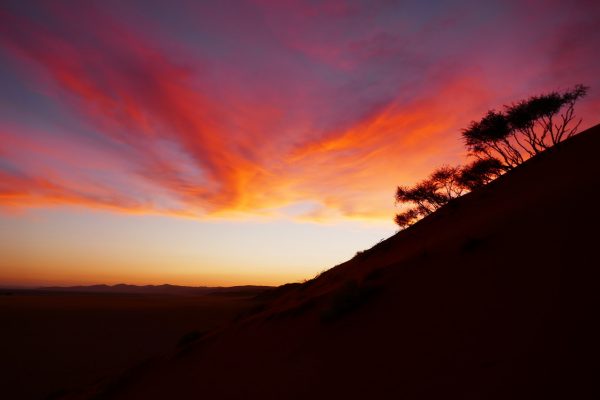 At dusk, nature puts on a spectacular show nearly every night.

There were plenty of other sights included in the tour as well, from prehistoric fossils to German colonial ghost towns. You can check out the full itinerary here.

But what about the food? What does a vegan eat in the deserts of Namibia??

In general, there are lots of vegan dishes in traditional African cuisine. However, I'd say Namibia is one of the exceptions to this general rule.

You can't grow many crops in the desert, and Namibia is covered mostly by desert, savannah and dry woodlands. So, meat-eating is more common here than in other African countries.

But not to worry! Stevie, our camp chef and assistant guide, did a great job catering for everyone on the tour — us vegans included. When we stopped at a supermarket on the first day to stock up on supplies, he asked for my input and was happy to buy all the items that I suggested.

Here’s a breakdown of what we ate for each meal of the day:

We had plenty to choose from, such as cereal with soy milk and fruit; toast with peanut butter and jam; and our new favorite — tea with rusks. 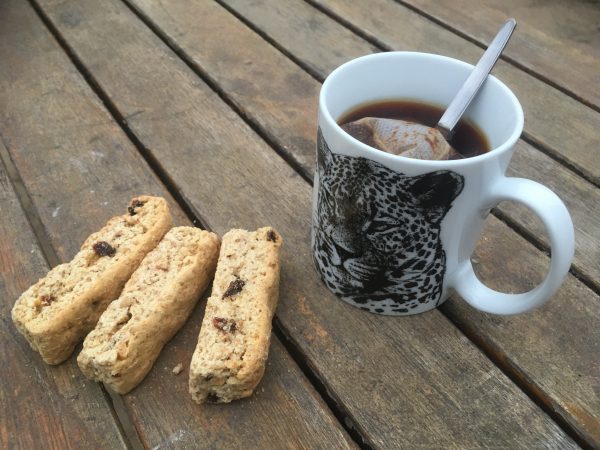 These hard biscuits are a South African specialty and are perfect for dunking in a steaming cup of tea first thing in the morning. While not all rusks are vegan, Stevie made sure to buy the ones that are. In case you’re wondering, the Ouma brand of rusks makes two vegan flavors – muesli and condensed milk (strange but true). 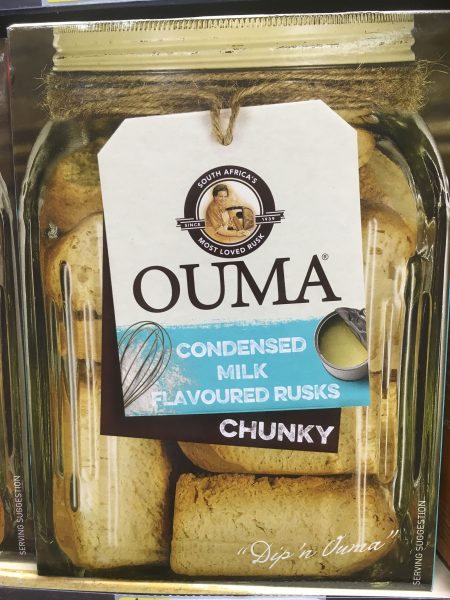 Yep, these are vegan!

On two of the days on our first tour of Namibia, Stevie cooked us a hot breakfast. This was a huge spread that included toast with baked beans, mushrooms, tomatoes and cucumbers, along with a delicious fruit salad. Plus all of the usual cold items mentioned above. A real feast! 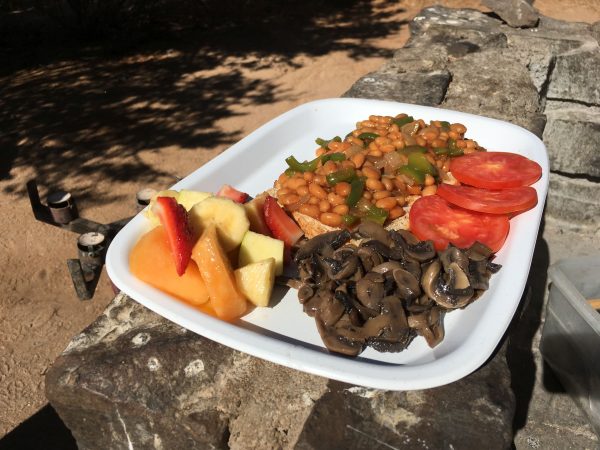 On days when we ate lunch at camp, Stevie would cook up something light and healthy, such as a pasta salad with beans, chickpeas and vegetables. 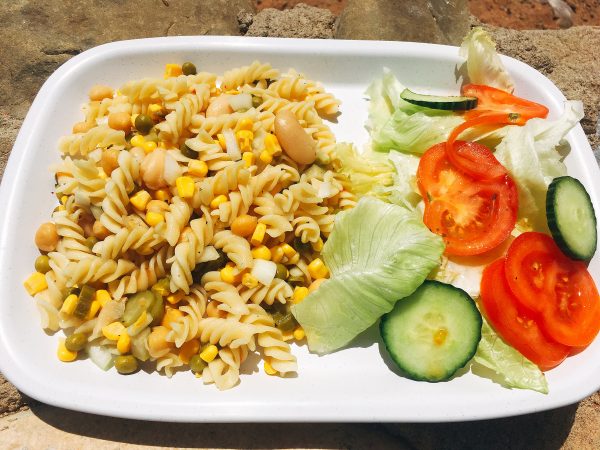 This pasta salad was one of our favorite lunch meals

On other days, however, we were still traveling at lunch time, which meant that Markus and Stevie had to stop on the side of the road and whip up something quick and easy.

For the meat eaters in the group, this was often hot dogs. For us, it was a sandwich made with all the hot dog toppings (lettuce, tomato, cucumber, beetroot, pickles, sweet chili sauce, etc.).

Stevie also provided avocado for the two of us, which made the sandwich a bit more filling. Even so, these roadside lunches were the least satisfying meals of the trip, which is probably to be expected.

We did have veggie burgers for lunch one day, which was a nice treat. But the supermarket where we had bought supplies on the first day only had one box of these vegan patties in stock, so they didn’t last long. 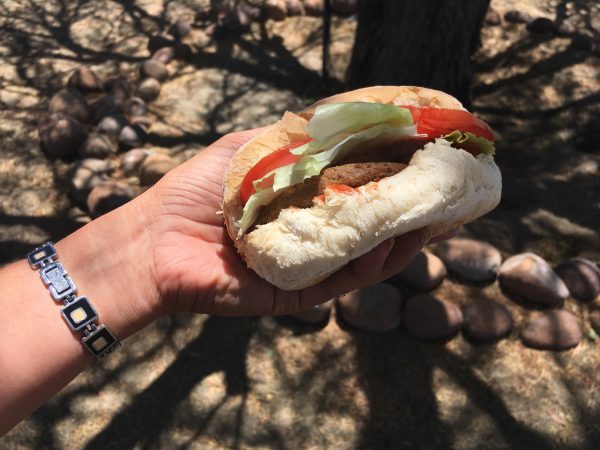 These veggie burgers were a real treat!

Dinner, on the other hand, was generally hearty and delicious. On most nights, there was a separate vegan main dish for just the two of us, like this vegan bolognaise sauce served over pasta. 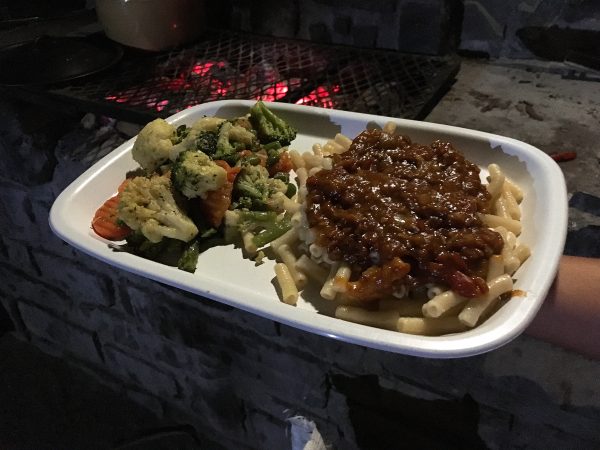 Occasionally, the only vegan options were the side dishes, such as mashed potatoes and boiled vegetables. This was still OK, although these veggie dishes were popular with everyone and tended to disappear quickly.

All in all, we were extremely pleased with our Southern Swing tour. We saw some spectacular sights, and Markus and Stevie were very knowledgeable guides and took great care of us.

Unfortunately, the next trip didn’t go as well.

For more on vegan travel in other parts of Africa, check out these articles:

Since all of the Wild Dog Safari guides were already on tour, a freelance guide and driver were hired to take our group to Etosha National Park for three days.

These were freelancers whom Wild Dog Safaris had not used before, and they turned out to be far below the usual Wild Dog standard.

The guide acted very unprofessionally in a number of ways, and he was also terrible at spotting animals. Luckily, there are so many animals in Etosha that it’s impossible to visit the park and not see them. 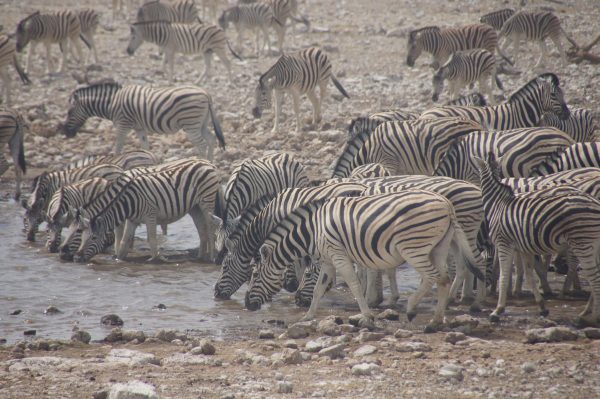 Nevertheless, Nick and I and the other tourists were the ones doing all the spotting, and we had to keep yelling for the driver to stop because he was driving right past the animals we had come to see! 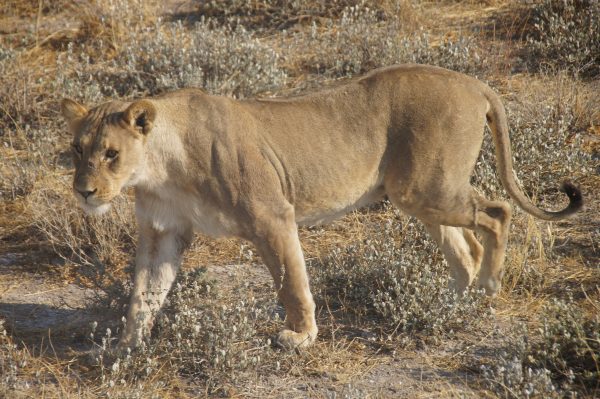 I yelled for the driver to stop when I spied this lioness out the window.

Everyone in our group was pretty fed up with both the guide and the driver by the time the tour was over, and we let that be known when filling out the feedback forms on the last day of our tour of Namibia.

I’m happy to say that the management of Wild Dog Safaris took our complaints very seriously. The owner assured me that they will never use that freelance guide again, and she even offered everyone in the group a generous partial refund to make up for the negative experience.

And for that reason, I still recommend Wild Dog Safaris without hesitation. 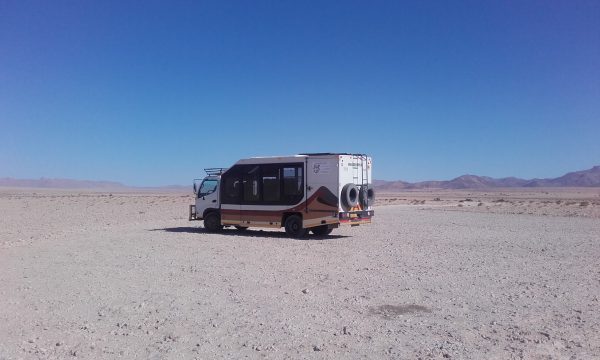 This is Africa, after all, and one thing I’ve learned after spending more than nine months traveling around the continent is that things rarely go according to plan.

What was different about this experience was that our tour operator did everything they could to fix the situation.

I’ve given them a few suggestions about how they could better cater for vegan tourists in the future, and I have no doubt that they will take those suggestions on board as well. The owner even told me that vegan and vegetarian meals will be the main theme of their next staff training in 2018!

As it was, we ate plenty of delicious meals while touring Namibia, and I’m sure that the vegans who come after us will eat even better than we did. The world is becoming more vegan-friendly all the time. Even in Namibia!

Want to know about even MORE vegan tour options in Namibia and beyond? Click the button below to see the full list.

SHOW ME ALL THE VEGAN TOURS

Disclaimer: I was offered a discounted tour with Wild Dog Safaris in exchange for this honest review.