Five Traditional Vietnamese Foods that Will Keep You Energized 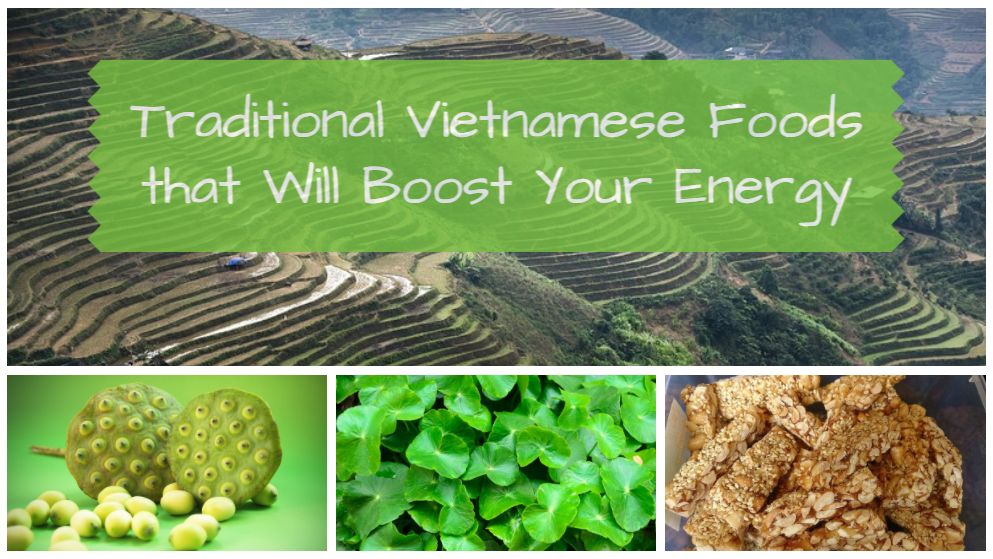 Vietnam is a fantastic destination in Southeast Asia for vegan travelers. Traditional Vietnamese food is full of vegan dishes, and few other countries in Southeast Asia are home to as many vegan eateries as Vietnam.

But restaurants aside, as a vegan traveler, chances are you are always on the lookout for tasty treats that can keep your energy levels topped up. The good news is that traditional Vietnamese food includes plenty of those too.

After months traveling the country from north to south, we came up with a list of five affordable vegan Vietnamese foods that are easy to find, healthy, and that will replenish your energy levels when you need it most. 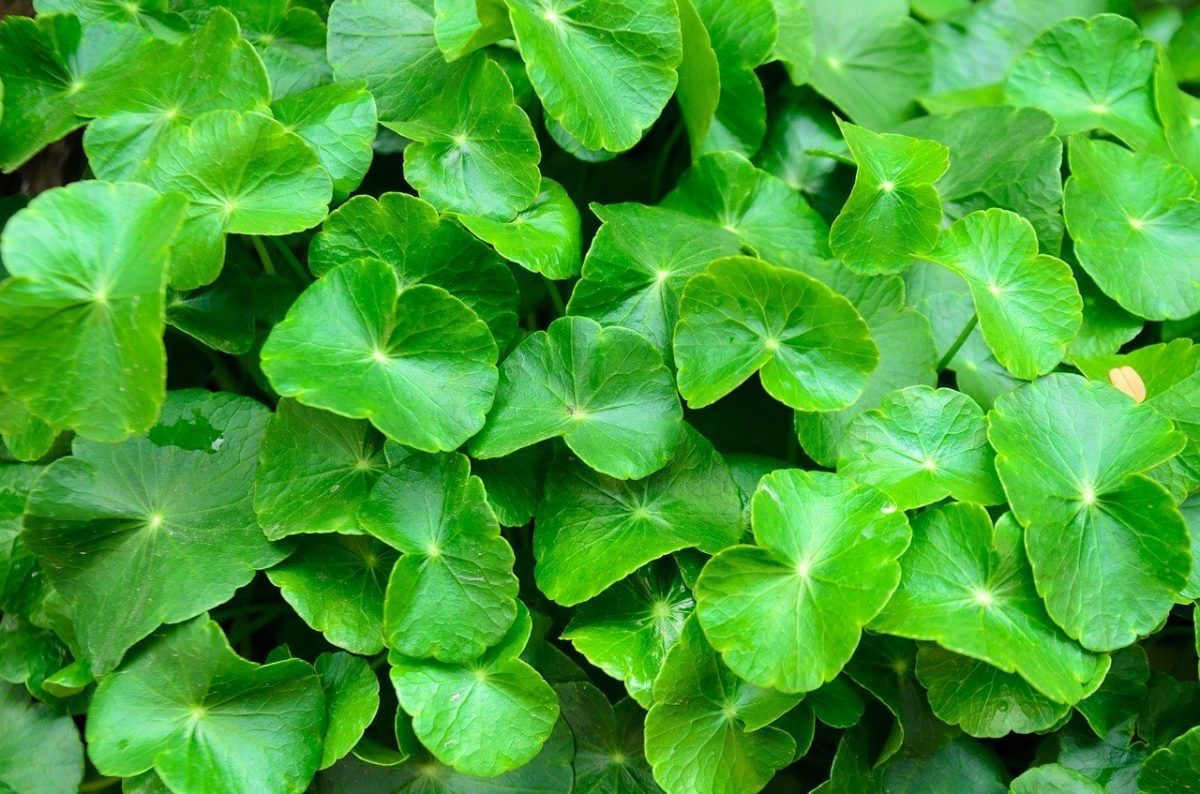 Pennywort has been used as a medicinal plant for thousands of years.

Pennywort juice has all the health benefits you would expect from a green juice and then some. Pennywort leaves have detox properties and are packed with B-group vitamins and minerals.

The plant is a key medicinal ingredient that has been used all over Asia for thousands of years. It's often prescribed as a purifying treatment that relieves inflammation and boosts stamina. You can think of it as Nature’s own energy drink.

In Vietnam, pennywort juice is sold by street vendors -- just look for the displays stuffed with pennywort leaves. It's also listed in the drinks menu in restaurants all over the country. And at approximately 5,000 VND a glass, you just can’t go wrong with it! 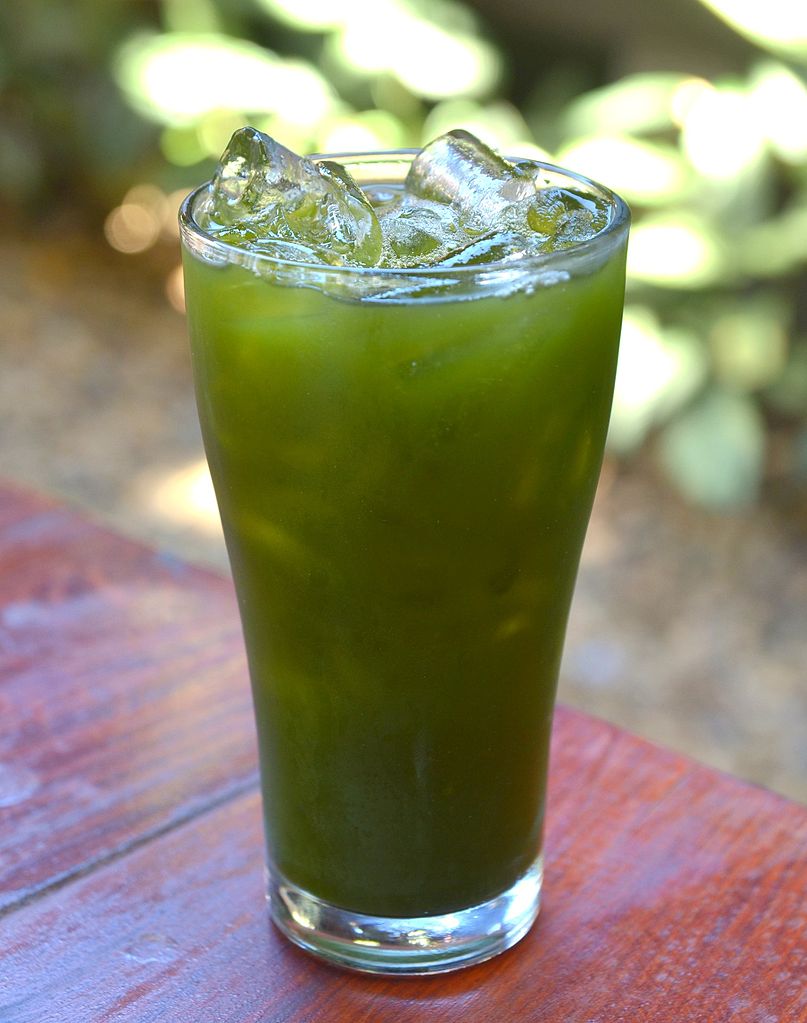 This green juice made from pennywort leaves is Nature's own energy drink.

Truth be told, pennywort has something of an acquired taste. If you've had spinach or other leafy greens added to smoothies, you won’t find the taste of pennyworth odd. In any case, you can be sure that a glass of pennywort is a healthy way of fighting the effects of heat, humidity and pollution. 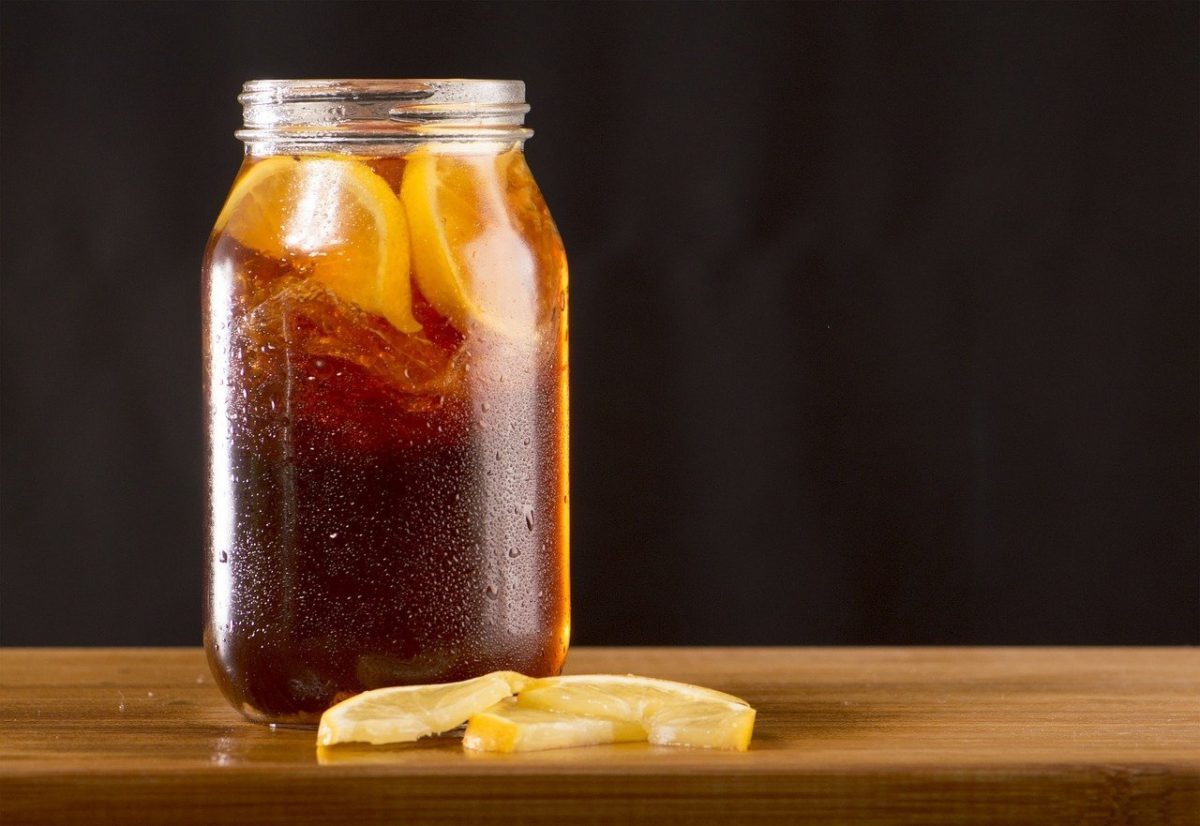 This orangey herbal tea is cool and refreshing on a hot day.

It’s hot and sticky out there, and you need a drink that will cool you instantly. Sugarcane juice is a popular choice, but why not try something different next time?

Each vendor has his or her own recipe, so just ask for a glass of nước sâm and find your favourite.

This gently flavoured iced tea will not only quench your thirst after a day out wandering in the tropical heat, but it will also bring up your energy levels due to its high amount of natural sugars. 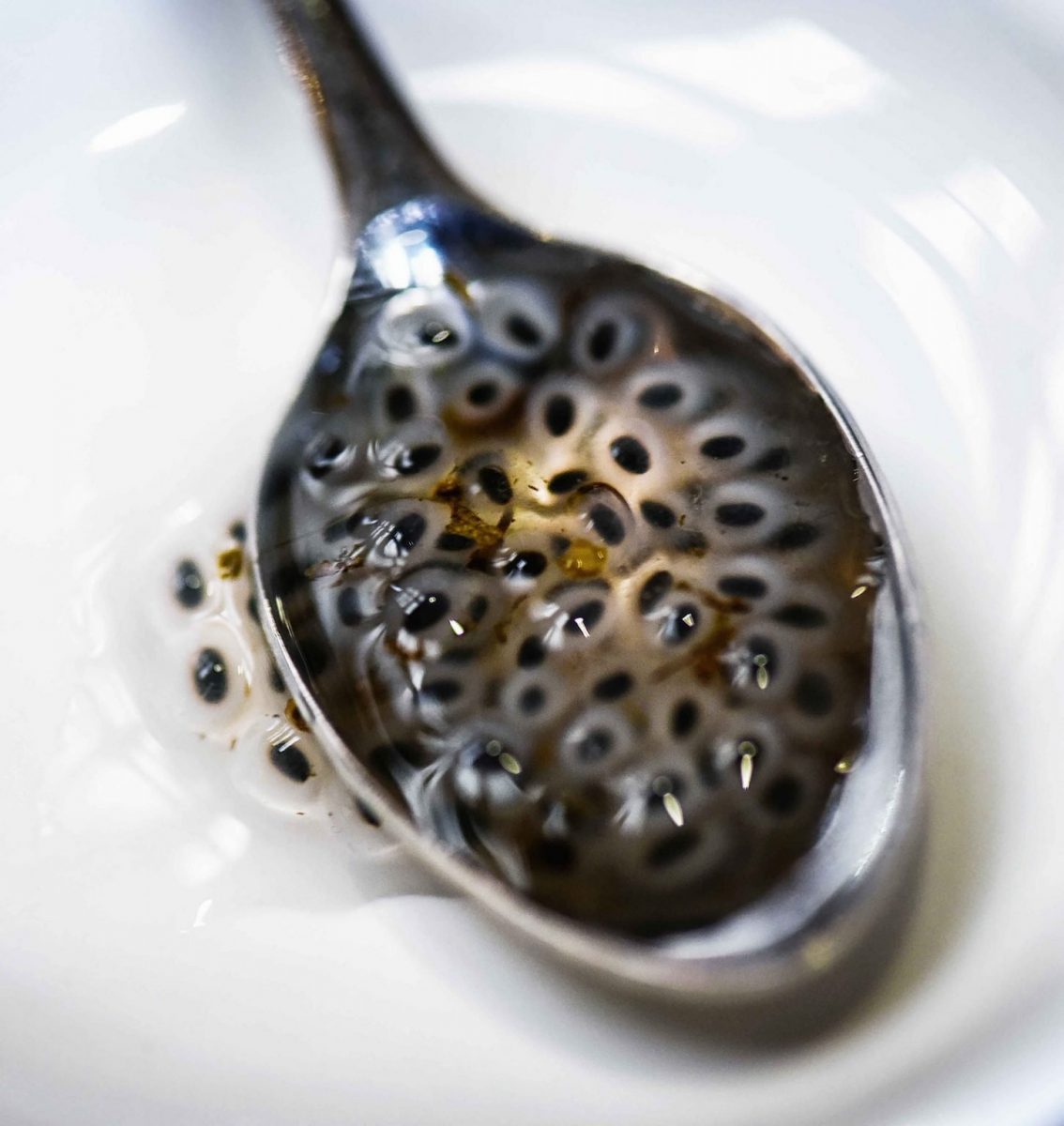 Often mistaken for chia seeds, these basil seeds are a great source of protein.

Easily mistaken for chia seeds, basil seeds are a common ingredient in Vietnamese cuisine and are often added to desserts and drinks. The seeds have antioxidant and digestive properties and are a great source of fiber and protein.

In fact, their protein content is higher than that of chia seeds! Some people are touting basil seeds as the new superfood, but there’s nothing new about them. They’ve been used in Asian cuisine for centuries.

You can find basil seeds (hạt é in Vietnamese) in supermarkets all over the country. It’s a good idea to get a small bag and carry them with you on your travels as an alternative to chia seeds.

Soak them in water for about 10-15 minutes, after which they will expand and take on a jelly-like consistency just like chia seeds do, but a lot faster.

Once soaked, you can add them to smoothies or juices you buy on the street. Or you can use them to make a quick breakfast by soaking them in coconut milk, cacao powder and the sweetener of your choice.

You will also find that some versions of chè (a traditional Vietnamese dessert) are sprinkled with basil seeds, and some juice vendors add them to their drinks too. 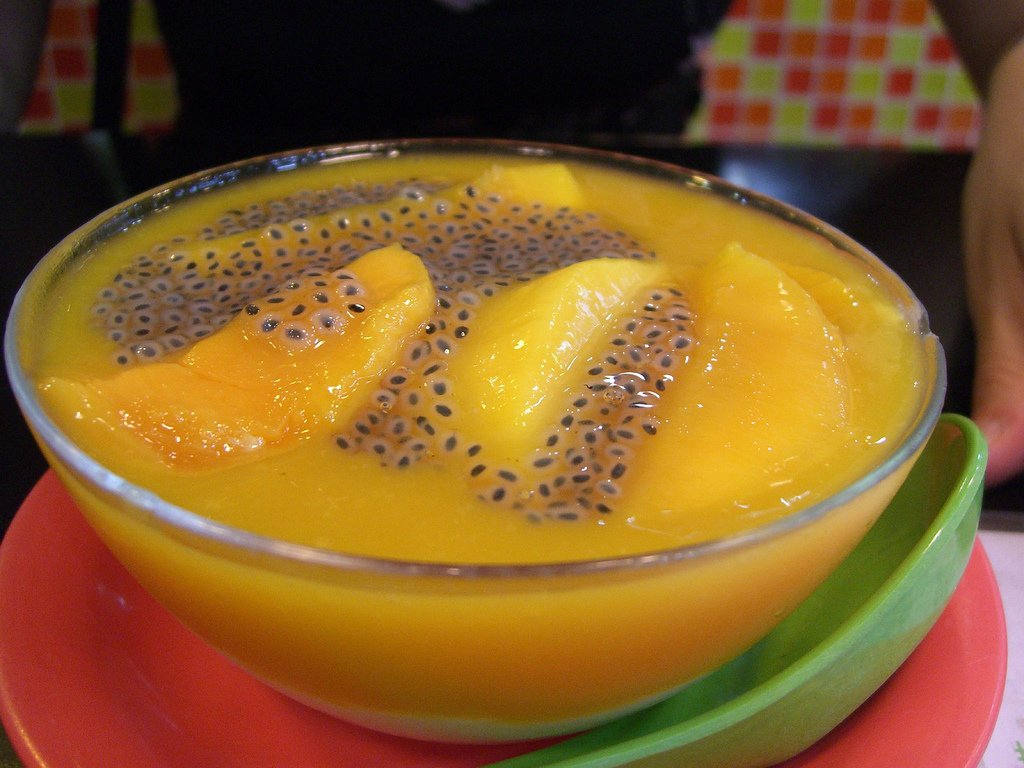 This traditional Vietnamese dessert is often sprinkled with basil seeds. 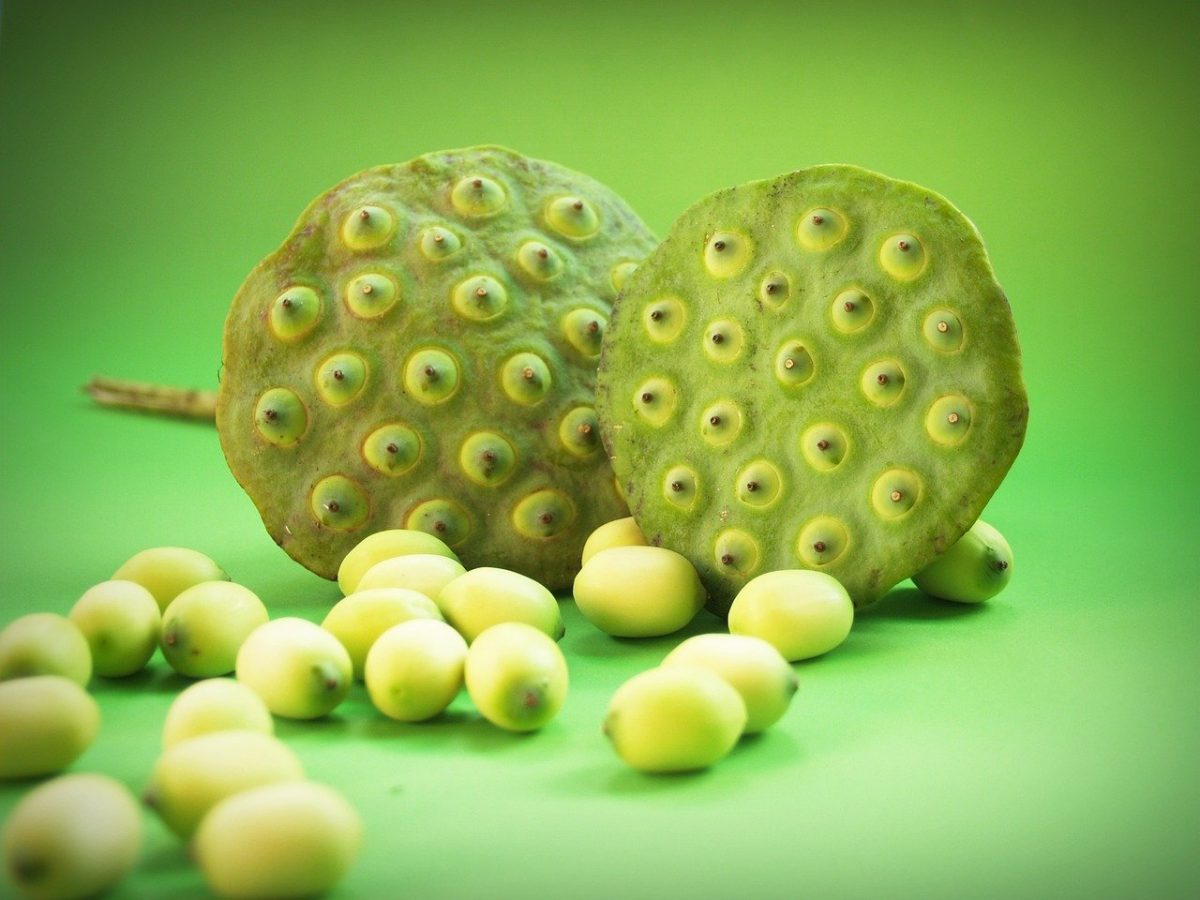 Lotus plants are not only incredibly gorgeous: their seeds, roots, and leaves are also edible and are known for their health benefits.

During our first trip to Vietnam, we were mystified by the sight of a street vendor pushing a cart full of bagged lotus pods. People soon started gathering around him, and we were left wondering what they could possibly do with the pods. Home décor? Altar offerings?

As it turns out, lotus pods contain the plant’s seeds, which look a bit like chickpeas. They are a good source of amino acids, iron, and manganese. They are also known for providing an instant energy boost.

Throughout Vietnam, you can find lotus seeds prepared in different ways. Supermarkets sell them as snacks, and you can eat them like you would eat roasted soy nuts or corn. Look for the little bags or plastic jars labeled hạt sen sấy in the snack aisle! 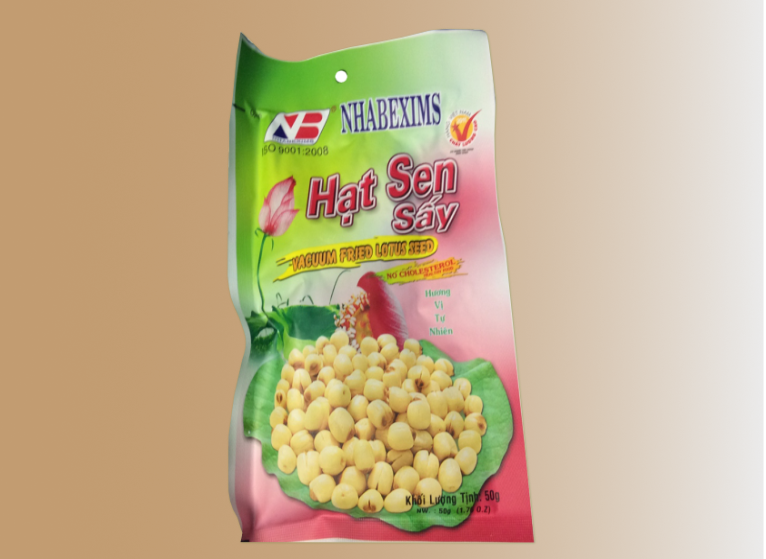 Look for pre-packaged lotus seeds in the snack aisle of local supermarkets.

You can also find lotus seeds in desserts like chè sen nhãn, a creamy coconut pudding that is traditionally eaten around Tet (Vietnamese New Year), although you can also find them all year round. In the image below, lotus seeds are placed inside longan fruit and cooked until soft. 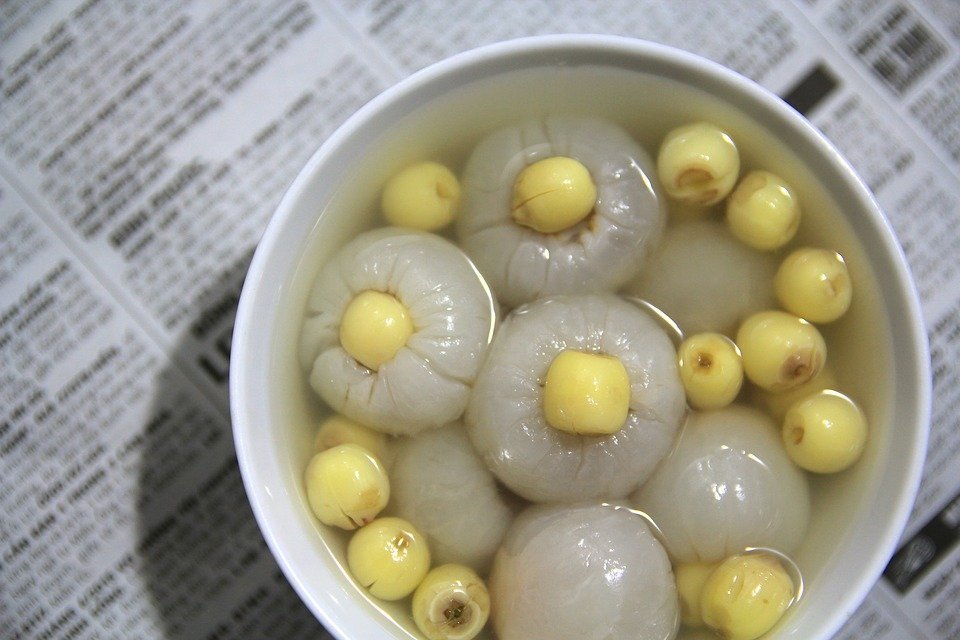 Lotus seeds can also be cooked until soft and eaten with fruit.

And there’s yet another delicious way to get your fill of lotus seeds: candied! These are often sold in wet markets, and we also found them as freebies in small vegan eateries all over the country. Commercially packaged versions also exist and are great to snack on during long bus or train trips. 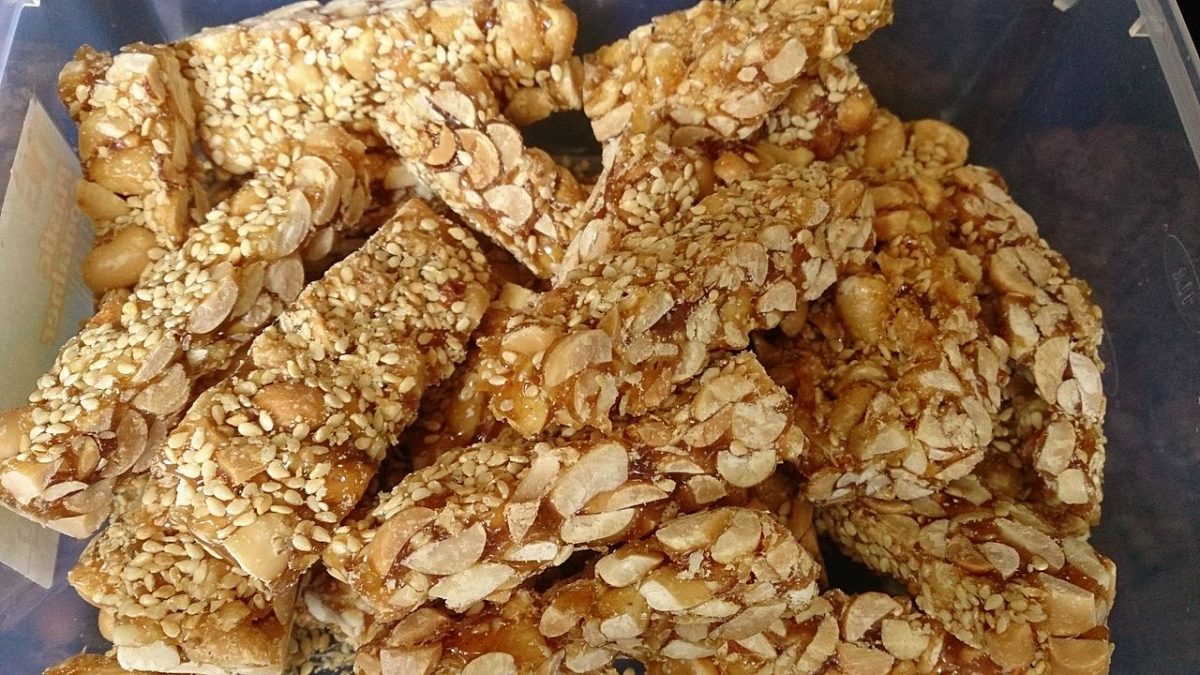 Peanut candy comes in many shapes and sizes in Vietnam.

Peanut candy is one of the most popular vegan snacks in Vietnam. You can find it in restaurants, supermarkets, convenience stores, and in shops inside train and bus stations. This candy (kẹo đậu phộng in Vietnamese) is a filling sweet treat that comes in handy when traveling.

There are so many versions of peanut candy that it would be impossible to list them all here. The most common ones are the rectangular squares that resemble peanut brittle, and the round-shaped versions consisting of round rice paper sheets topped with tons of sesame seeds and ginger.

It goes without saying that if you have a sweet tooth you must give this a try!

Hopefully you’ll find something you really like among the examples of traditional Vietnamese food we have listed here. Give them a try, and enjoy your vegan journey through Vietnam!

Want more tips on eating vegan in Vietnam? Check out this ultimate vegan guide to Vietnam!

Vegan Vietnam is an online project run by two long-term vegans from Canada and Spain. The website is no longer online, but on their Instagram account travellers can find tips, restaurant listings, and useful resources that will help them find great vegan food throughout the country. 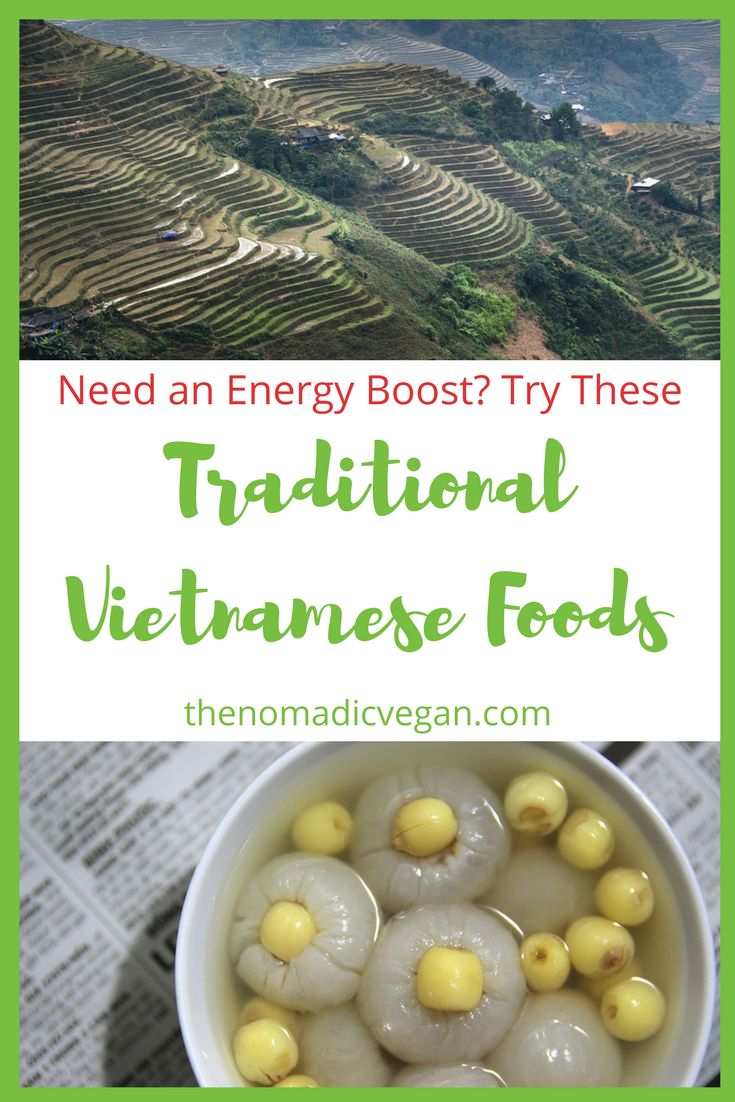