Do You Need a Traveler WiFi Hotspot? 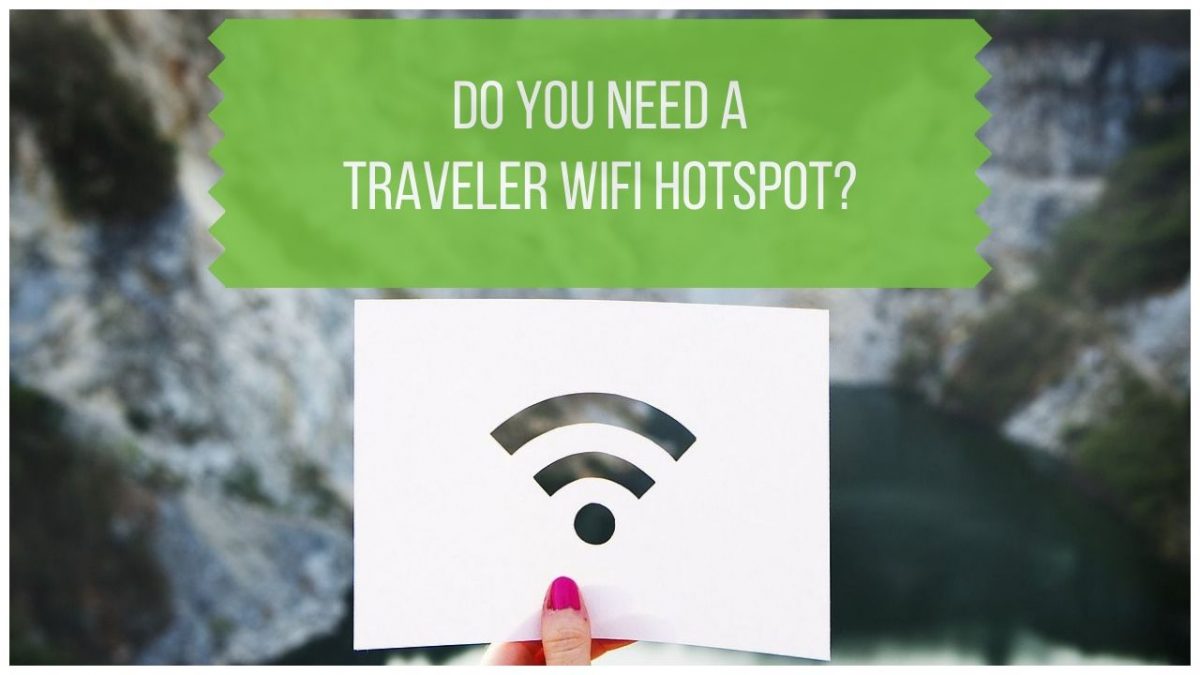 In the past few years, technology has drastically changed the way we travel.

Gone are the days when I could just throw a guidebook into my backpack and take off, with no advance reservations and only a vague idea of my itinerary.

With more people traveling than ever before, booking accommodations online has become a necessity. And it’s not just hotel bookings that we rely on our smartphones for.

There’s also navigating with maps apps, searching for nearby restaurants, calling an Uber, messaging friends and family, and of course sharing our travels on social media.

While I used to just rely on hotel WiFi to get online, I’m finding it more and more of a necessity to be connected all the time when traveling.

For example, if I’m looking for a vegan-friendly lunch place while I’m out sightseeing, I want to be able to open up my HappyCow app and search for nearby restaurants.

Sure, it’s possible to research this beforehand and pin restaurants on a downloaded map. But what if the restaurant I chose ahead of time is closed when I get there or has gone out of business?

This has happened to me a number of times. The best laid plans of mice and men often go awry.

Sometimes, you need to come up with a backup plan. And for that, you need to be able to get online at a moment’s notice.

Recently, I tried out a handy device that allows me to do just that. It’s called the KeepGo mobile WiFi hotspot.

In this honest KeepGo review, I’ll explain what a traveling WiFi hotspot is, who it’s useful for, and what features to look for when choosing one. I’ll also share my personal experience using a portable travel WiFi hotspot for the first time.

What Are International Mobile Hotspots?

A hotspot is like a miniature WiFi router that you can carry around with you. It's like your own personal WiFi network that follows you wherever you go. No extortionate roaming fees, and no swapping out SIM cards every time you cross an international border.

It's the ideal WiFi device for travelers, as it allows you to stay connected no matter where you are. There are several different traveler WiFi devices on the market, but not all of them are created equal.

They offer two types of devices that allow you to use mobile data while traveling. The first is a SIM card that you can insert in your phone, and the second is a portable travel WiFi hotspot. I tried out their mobile hotspot, and that's the device I'll be reviewing in this article.

I'll also point out the main differences between SIM cards and WiFi hotspots and explain why you might want to choose one over the other.

First of all, you’ll only be able to use a SIM card if you have an unlocked phone. If your phone has been locked by your carrier, then a mobile WiFi hotspot is your only option, unless you can arrange an international data package with your carrier before you leave home.

For those with unlocked phones, you could buy individual local SIM cards in each country you travel to, or you could get an international SIM card, like the one made by KeepGo.

While using a local SIM card is probably going to be the cheaper option, it’s not always the most convenient or practical. This is especially true if you are traveling to multiple countries and will only be in one country for a few days or a week at a time.

The other issue is that, while local SIM cards often seem to be an incredible deal, they are sometimes too good to be true.

On several occasions, I’ve run into problems where a local SIM I bought stopped working before the supposed expiry date. Or the local carrier throttled the speed and it became all but unusable. If you’re not sure what throttling is, I’ll explain in the next section.

If you’re traveling alone and only use one or two devices, then an international SIM card might work best for you. It will only give you Internet access on your smartphone, but most phone models allow you to tether to a laptop.

The KeepGo WiFi hotspot, on the other hand, can connect to up to 16 devices at once. So, for couples, friends or family members traveling together, a WiFi hotspot might be the better choice.

It does mean that you’ll have one more device to carry around and keep charged, but the device is pretty small, so that’s not a big deal.

If you're a long-term traveler or are visiting multiple countries on the same trip, you'll want to make sure you choose a portable travel WiFi device with global coverage.

Some WiFi rental companies have popped up recently that only operate in a single country. For example, there's one called Travelers Wifi, which you can book in advance and pick up from any post office or tourist information office in Switzerland.

But these devices only work in Switzerland and Liechtenstein! And they’re not cheap either.

I honestly don’t see the point of this product. If you’re only traveling to these two countries, then you’re better off just buying a pay-as-you-go local SIM card, which is more economical.

On the other hand, if you’ll also be visiting surrounding countries such as France, Germany or Austria, then an international pocket WiFi device might make more sense for you.

Unlike these localized hotspots, KeepGo provides coverage in more than 100 countries. Here’s the full list:

What is throttling, you ask? It's when an Internet provider deliberately reduces the speed of your Internet connection from 4G down to 3G or even 2G once you reach a certain daily limit.

Many Internet providers who offer unlimited data will throttle your data speed. This is the case, for example, with the TEP Wireless Teppy device and the Skyroam Solis hotspot that doubles as a power bank.

KeepGo is different, because they do not work on an unlimited data model. Instead, they follow a pay-as-you-go system, where you only pay for the amount of data you actually use.

Since you’ll be carrying around and charging an extra device, size and battery life are also things to consider.

The battery life of the KeepGo WiFi hotspot is about 6 hours of usage time and 300 hours of standby time. It’s lightweight and hardly takes up any space. In fact, it easily fits inside a pocket and is much smaller than most smartphones made these days.

My Experience with the KeepGo 4G LTE Mobile WiFi Hotspot

When I tried out the KeepGo hotspot, I put it to the most challenging test possible. I used it while traveling in China, where Internet access is notoriously difficult.

But that's not the only problem travelers face when using the Internet in China. I also found that Internet speeds were incredibly slow, both on WiFi and when using a local Chinese SIM card in my phone.

And indeed, if you look closely at the list of countries where KeepGo offers coverage, you'll see that China is the only one with an asterisk next to it. While 4G speed Internet is available in all of the other 120+ countries that KeepGo covers, China is the one country where 4G/LTE is not supported.

4G speeds are supported in 120+ countries, but not China.

KeepGo works with two Chinese carriers, but one of them (China Unicom) only offers 2G speeds, while the other (China Mobile) seems to offer 3G.

China is a beautiful and fascinating country, but it's sometimes an incredibly frustrating place to travel in. For me the most frustrating thing of all was the (lack of) Internet access there.

My KeepGo WiFi hotspot was not a miracle worker, but it did get me out of some sticky situations when I couldn't get online any other way. I started calling it my "secret weapon".

I knew about the Great Firewall and had planned ahead by downloading a VPN app before I entered China, so I thought I would be fine. Unfortunately, that app (VPN Nord in case you're wondering) did not work very well for me.

Sometimes I could get it to work on my phone, but never on my laptop. This was probably because of the slow Internet speeds, as it seemed to work best whenever I found a (relatively) strong connection.

I never realized how dependent I was on Google and Facebook until I was suddenly unable to use them! And as a travel blogger, not having access to my social media profiles or my email inbox for 40+ days was a complete disaster.

I'd read that VPNs could not be downloaded from inside China, but I kept trying anyway. With my hotel WiFi crawling at turtle speed, it was the KeepGo WiFi hotspot that made it possible for me to download other VPN apps and try them out.

Most of them didn't work, but a couple of them did. Sometimes. It wasn’t perfect, but the KeepGo hotspot was my saving grace when nothing else would work.

How Much Does a KeepGo Mobile WiFi Hotspot Cost?

The device is available for US$ 99 and comes with 1 GB of data preloaded that never expires. In addition, KeepGo offers free shipping to 38 countries. If you use up the 1 GB, you can easily top up with more data on the KeepGo website.

Topping up your data is easy with KeepGo.

With TEP Wireless and other competitors, you pay a flat rate per day for unlimited data (which gets throttled once you reach a certain limit). With KeepGo, you only pay for what you use.

That means you can make full use of free hotel WiFi whenever you have access to it, and only pay for Internet when you really need it. For most users, this will be cheaper than paying a flat daily rate.

Video streaming will get you just 30 minutes, though, so be selective in how you use your data.

Pro Tip: Turn off any automatic backups that run in the background, as these can eat up your data quickly without you realizing it. For example, Microsoft OneDrive may try to sync your whole hard drive with its cloud backup, and doing this over your traveling WiFi hotspot could become expensive.

Who Is the KeepGo Pocket WiFi Hotspot For?

- light to moderate Internet users, for whom pay-as-you-go will be more affordable than unlimited data plans

- travelers with locked phones who cannot use a local SIM card

- business travelers, digital nomads and other travelers who need unthrottled high speed data at all times

- travelers who want to share their Internet connection among several devices

If you have any questions about getting the hotspot set up, don’t hesitate to contact KeepGo's customer service. They offer 24/7 technical support and will be happy to walk you through the process.

Grab your KeepGo WiFi Hotspot at this link and use the code "NOMADICVEGAN" to get 10% off! 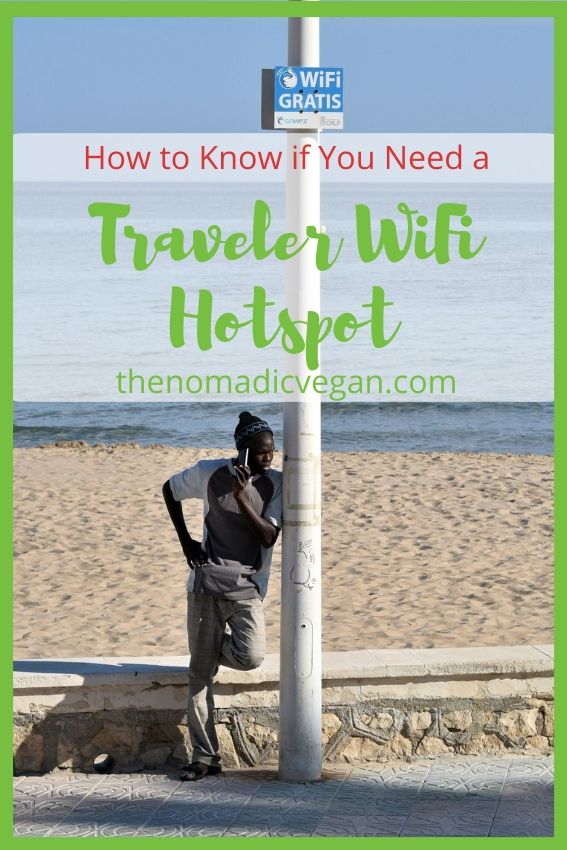 Many thanks to KeepGo for gifting me their traveler WiFi hotspot for the purpose of writing this review. As always, opinions expressed here are entirely my own and are based on my personal experience with the product.