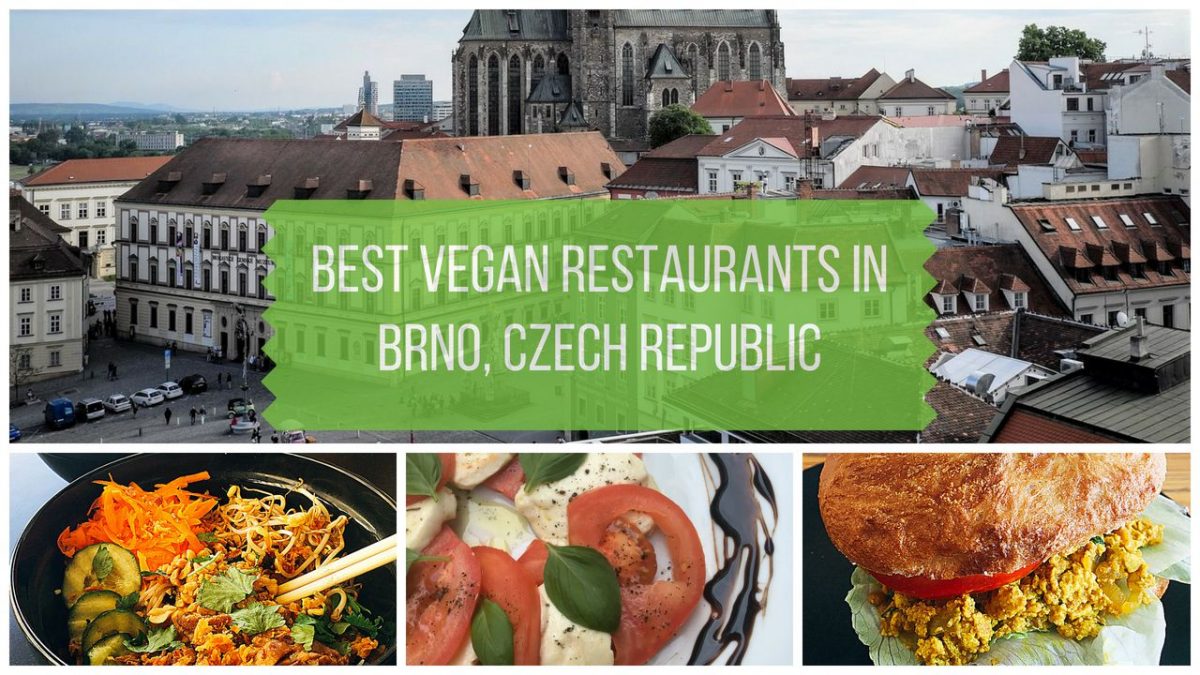 You might have heard that Prague is bursting at the seams with vegan and vegetarian restaurants these days. But did you know that Brno, the Czech Republic’s second largest city, is also a vegan wonderland?

You won’t need to trek out to the suburbs to taste the best of the vegan food Brno has to offer. Every single Brno vegan restaurant (there are currently 13 of them) can easily be reached on foot from anywhere in the city center.

Before we delve into the Brno vegan food scene, let’s go over a bit of the local lingo. You might see vegan eateries in Brno referred to as either “vegan restaurace” or “vegan bistro”. And many of them could be both.

The word “bistro” is used frequently in the Czech Republic and in neighboring Slovakia. It’s a borrowed French word that generally refers to a casual, informal eatery that serves simple food at moderate prices. In many ways, a bistro is similar to a café.

“Restaurace” is a broader term and can refer to any type of restaurant, from fast food to fine dining. For simplicity’s sake, I have divided this guide into vegan and vegetarian restaurant sections, which is the usual format for my city dining guides.

Just know that most of the Brno vegan restaurace listed here would probably also fall into the vegan bistro category, and you’ll see them described as such on HappyCow and other restaurant directories. 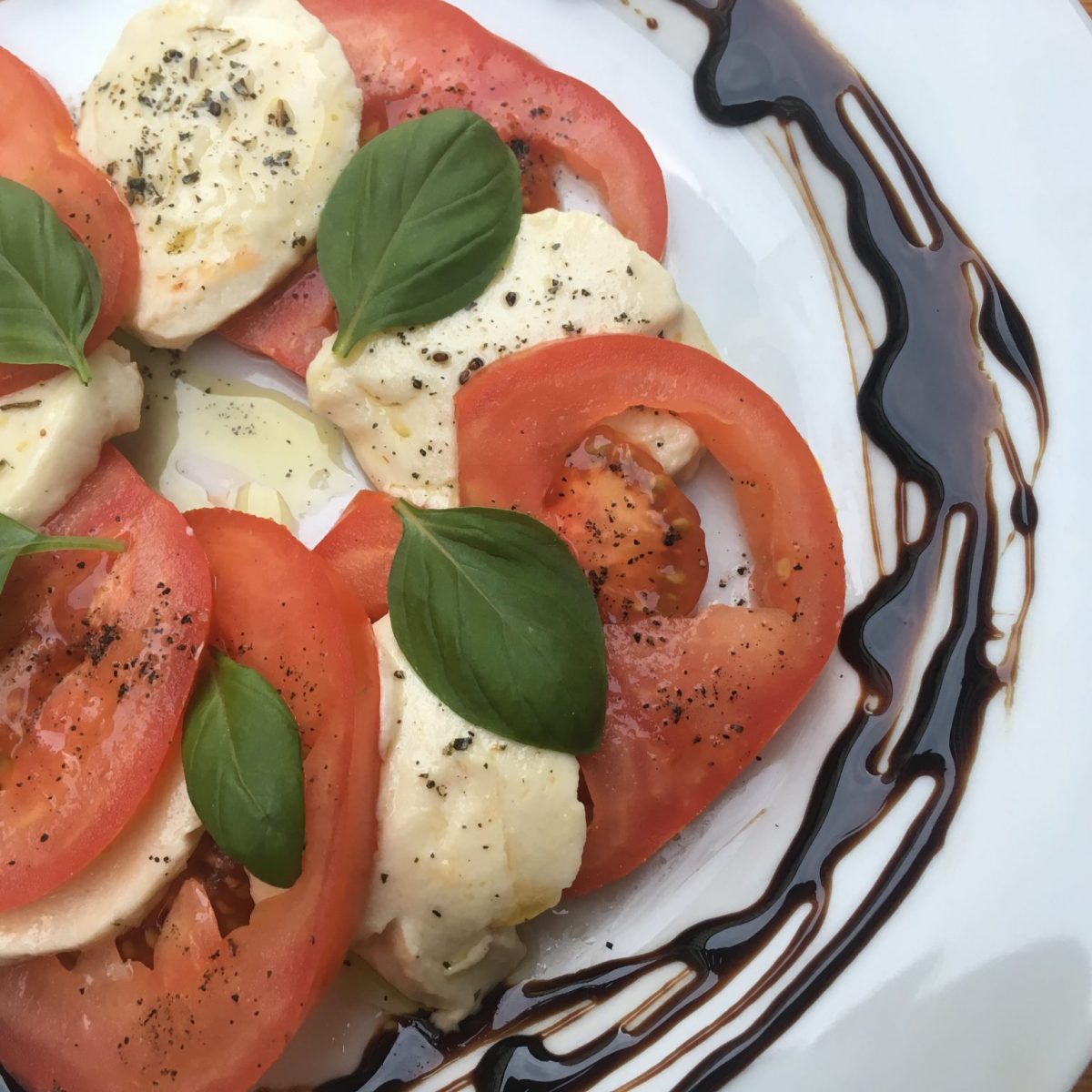 This local favorite is connected to Kabinet Múz, which is a popular art gallery, music venue and performing arts center in Brno. It’s open only for dinner, so plan your schedule accordingly, because you don’t want to miss this.

The food was some of the best I tasted during my visit to Brno. I highly recommend the jackfruit burger, and also the caprese salad. I’ve never tried such a convincing vegan mozzarella cheese before! This salad brought me back to the days when I lived in Rome.

Portions at Die Küche are quite large, so don’t get too carried away when ordering. The prices are very reasonable too. If you’ve just come from Prague, you’ll be pleasantly surprised by how affordable it is to eat at vegan restaurants in Brno. 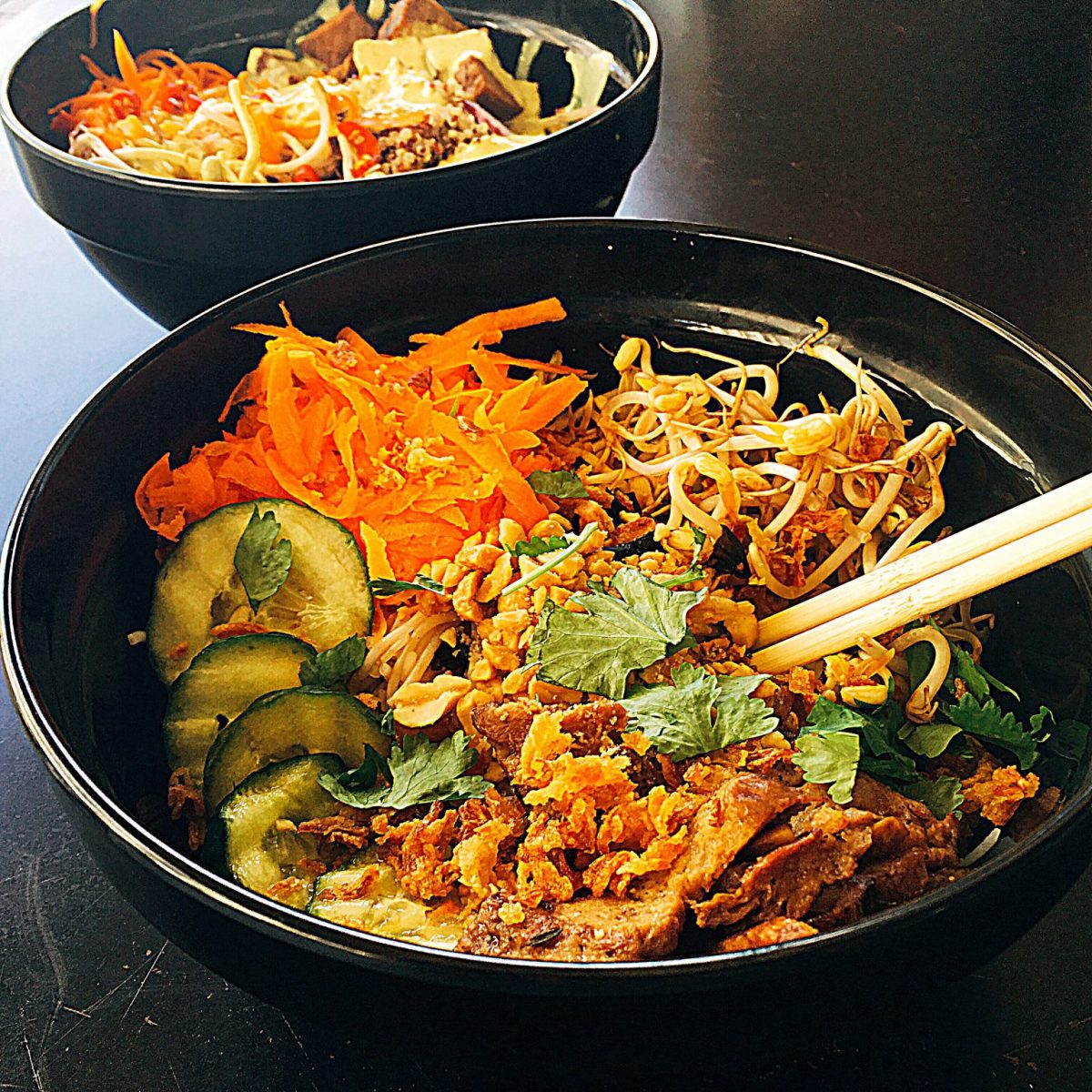 My first Forky’s experience was at their Prague location, and, to be honest, I wasn’t terribly impressed. The cheeseburger I ordered there was good, but the runny sauce made the bun very soggy, and the fries were pretty tasteless.

Nick had ordered the “no fish and chips”, which has to be the worst attempt at a vegan fish and chips I’ve ever encountered. The “fish” was just tofu with a few pieces of seaweed thrown on top of it, and it wasn’t even battered and deep fried.

But I’d heard great things about Forky’s, so I figured maybe we’d just ordered wrong. Sure enough, our visit to their flagship location in Brno was much better.

This time, we shied away from the veganized fast food and chose healthier options instead. Nick ordered the BÚN BÒ NAM BỘ -- a Vietnamese dish with rice noodles -- and I opted for the Superbowl, which is basically a customized salad where you get to choose the ingredients.

Both of us were happy with our choices this time, so I’d recommend going for the healthier options if you do pay a visit to Forky’s. It’s just across the street from the Church of St. James, below which you’ll find an ossuary that holds the bones of more than 50,000 people. It’s definitely one of the most memorable sites in Brno! 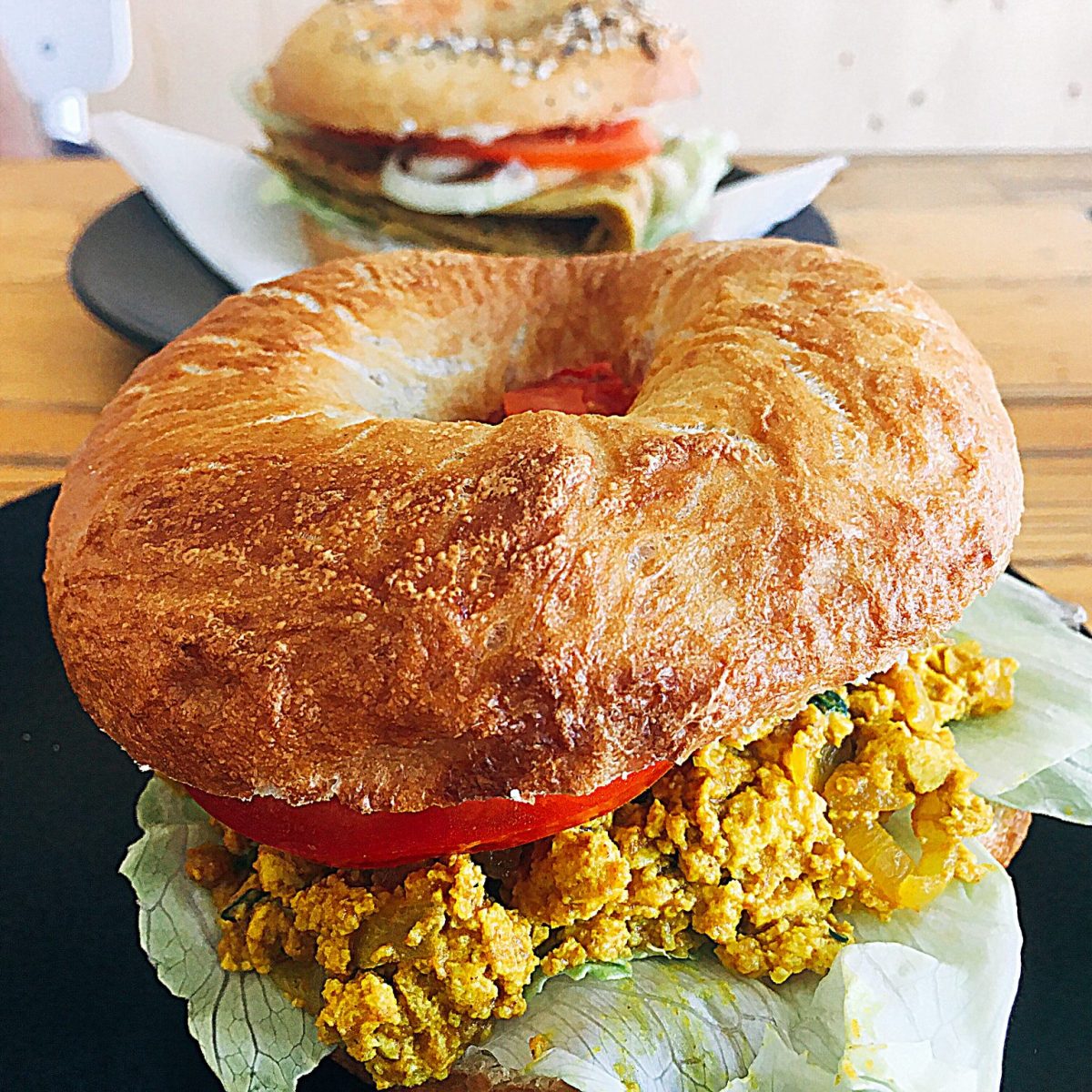 Just off the Cabbage Market (“zelný trh” in Czech) is this casual eatery, which is located in a bright and cheerful setting amidst other food stalls and lots of natural light. Place your order at the counter, and then find a seat at one of the large tables with benches nearby.

Ovegano is a great option for breakfast and offers typical morning fare such as waffles, pancakes and bagels. There are some heartier options too, though, like burritos and seitan wings. Everything we tried there was delicious! 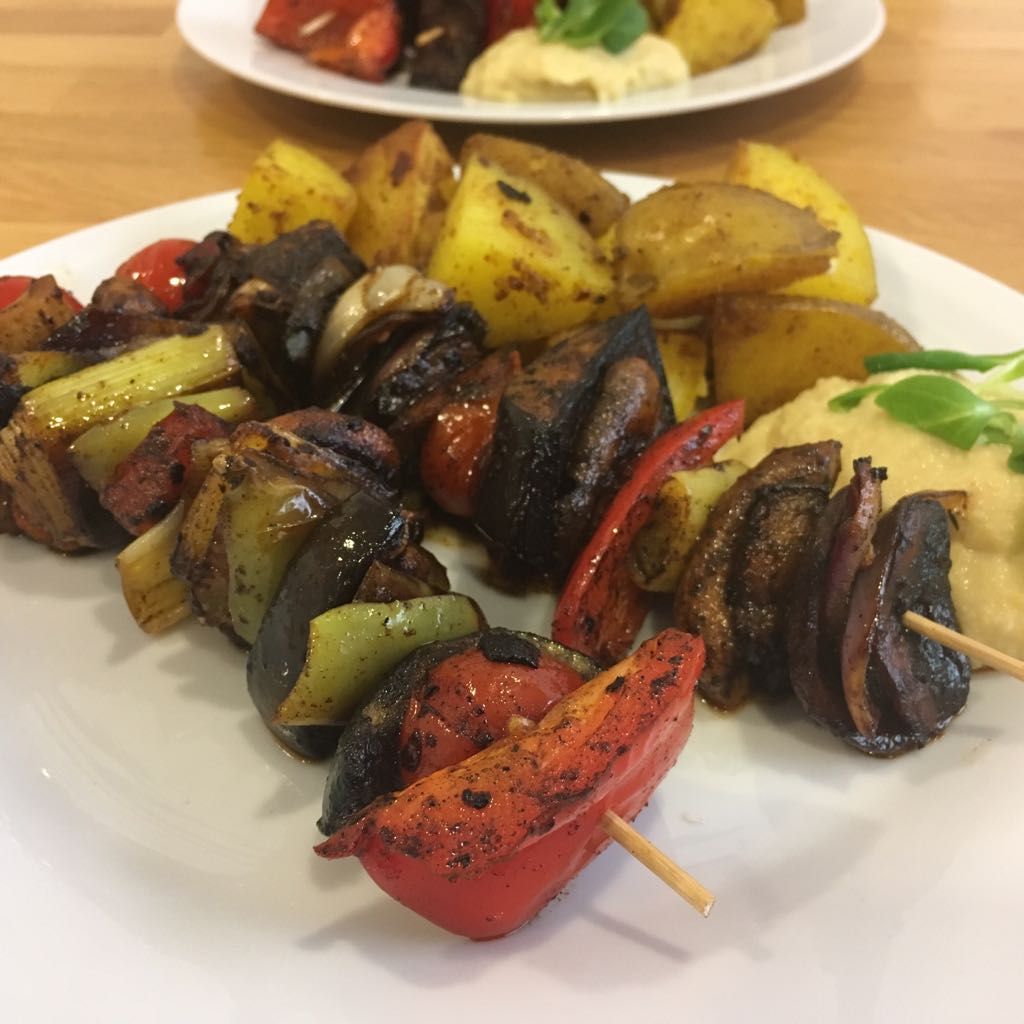 If you visit the 10-Z nuclear bunker, this casual café is nearby and would make a convenient lunch stop either before or after your tour. You could even come for dinner, as they have recently starting staying open until 9pm. Check to make sure that this is still the case, though.

Based on the online reviews I had read, I expected the menu here to be mostly raw vegan, which is not really my thing. I was happy to discover, though, that most of the dishes on offer were cooked. The menu is written only in Czech, but the staff can translate for you. I recommend the vegetable skewers.

The desserts were all raw, and the one I tried didn’t impress me much. But like I said, I’m not really into raw food. There’s also a small shop on the premises where you could pick up some snacks and local specialty items. 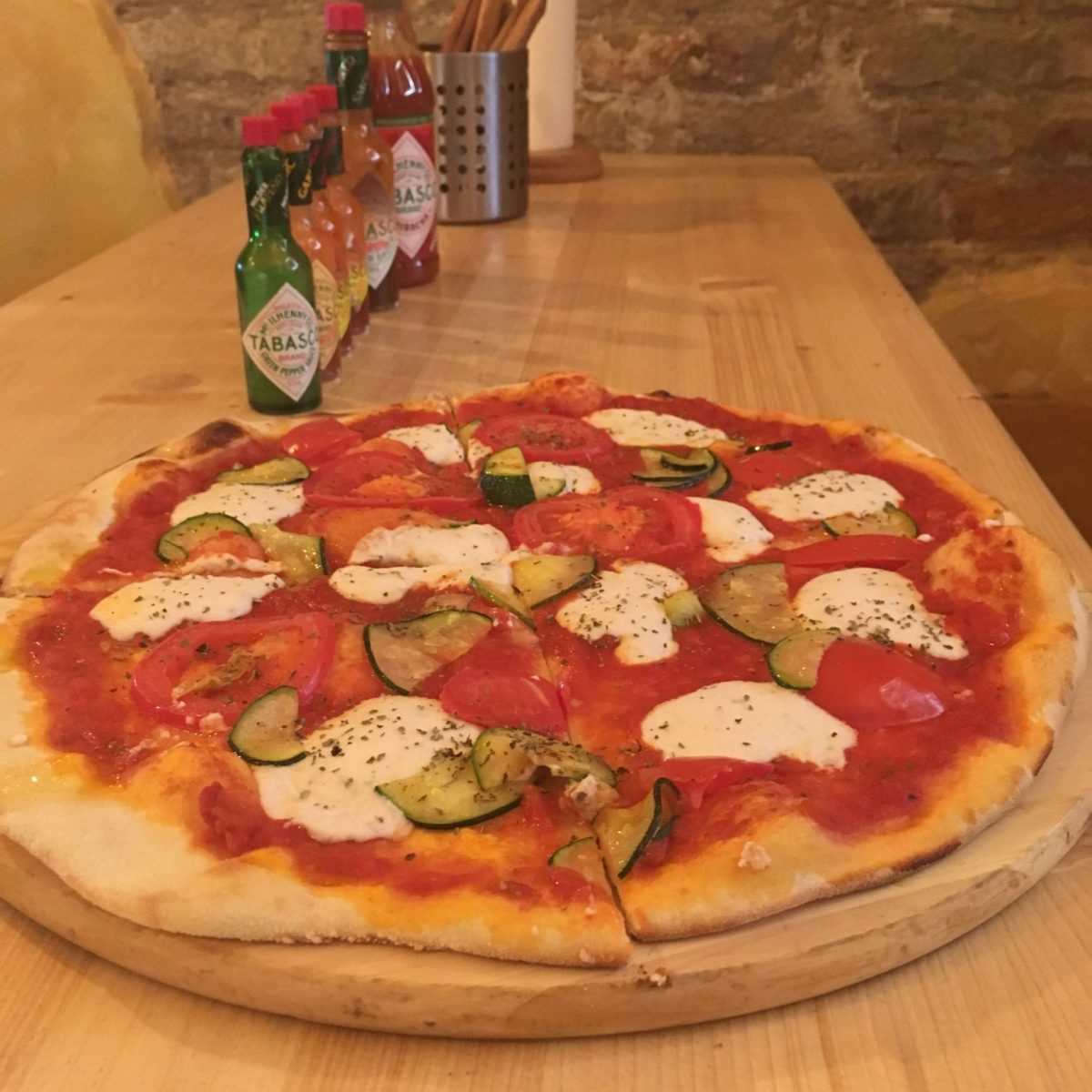 This underground (in more ways than one) pizzeria has an alternative, counter-culture vibe and makes some of the best vegan pizza Brno has to offer. There’s no sign with the name “Pizza Punk” that I could see, but if you see an expletive-filled slogan about living without cruelty, you’re in the right place.

The menu is posted up on the wall and is quite small: there are three kinds of pizza, two of which contain tabasco sauce. There were also bottles full of different kinds of tabasco sauce on the tables, so I guess tabasco sauce is their thing.

I like a bit of spice, but not necessarily on pizza, so I ordered the tabasco-free option. It was basically a Margherita pizza with zucchini as an additional topping. The cheese is homemade, and apparently it’s made from peanuts!

Portions are large, and the pizza is cheap. There are just two tables, but the place wasn’t very busy when we arrived, so this wasn’t a problem. It did get very hot inside, though. 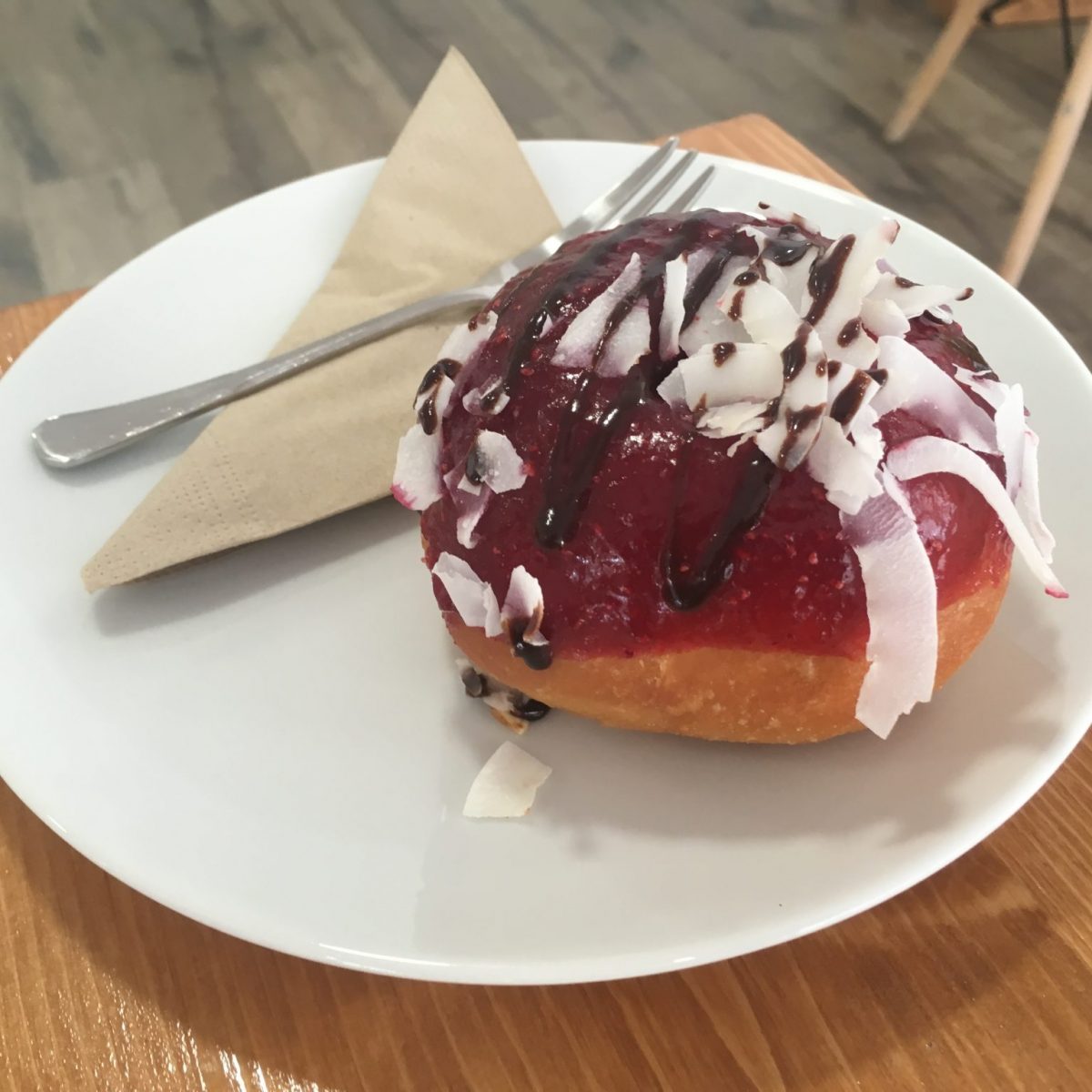 A sweet bar, or cukrárna, is a common thing in the Czech Republic. As you would expect, they serve sweet stuff – usually a combination of ice cream and pastries.

This one in particular serves ice cream and doughnuts, and everything here is vegan. They have a wide variety of filled and unfilled doughnuts to choose from.

After much deliberation, I settled on an unfilled one topped with raspberries, coconut flakes and chocolate. I was very happy with my choice! It was quite doughy, and sweet but not too sweet. 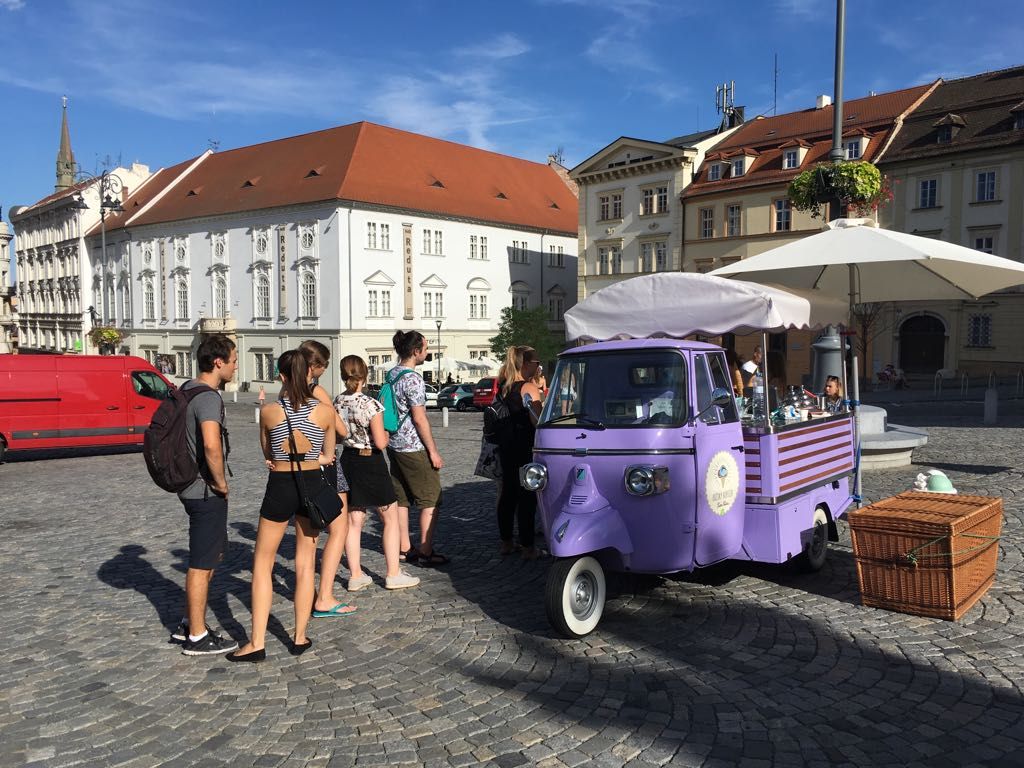 You’ll likely see several of these little three-wheeler ice cream trucks parked in different spots around the city, each one painted a different color of the rainbow. The most reliable place to catch one is in the Cabbage Market.

The flavors are often rather inventive and rotate on a daily basis. All the ice cream is vegan, and so are the cones. Most flavors are fruit sorbets, but sometimes there’s a chocolate option.

While the elusive chocolate never materialized during my visit, I did snag a scoop of vanilla from Tutti Frutti that was deliciously smooth and creamy. It would be nice if they offered a few more non-sorbet options, but it's great to have fully vegan ice cream stands throughout the city.

Make sure you save time for some sightseeing in Brno in between your meals! Check out this list of 20 awesome things to do in Brno. 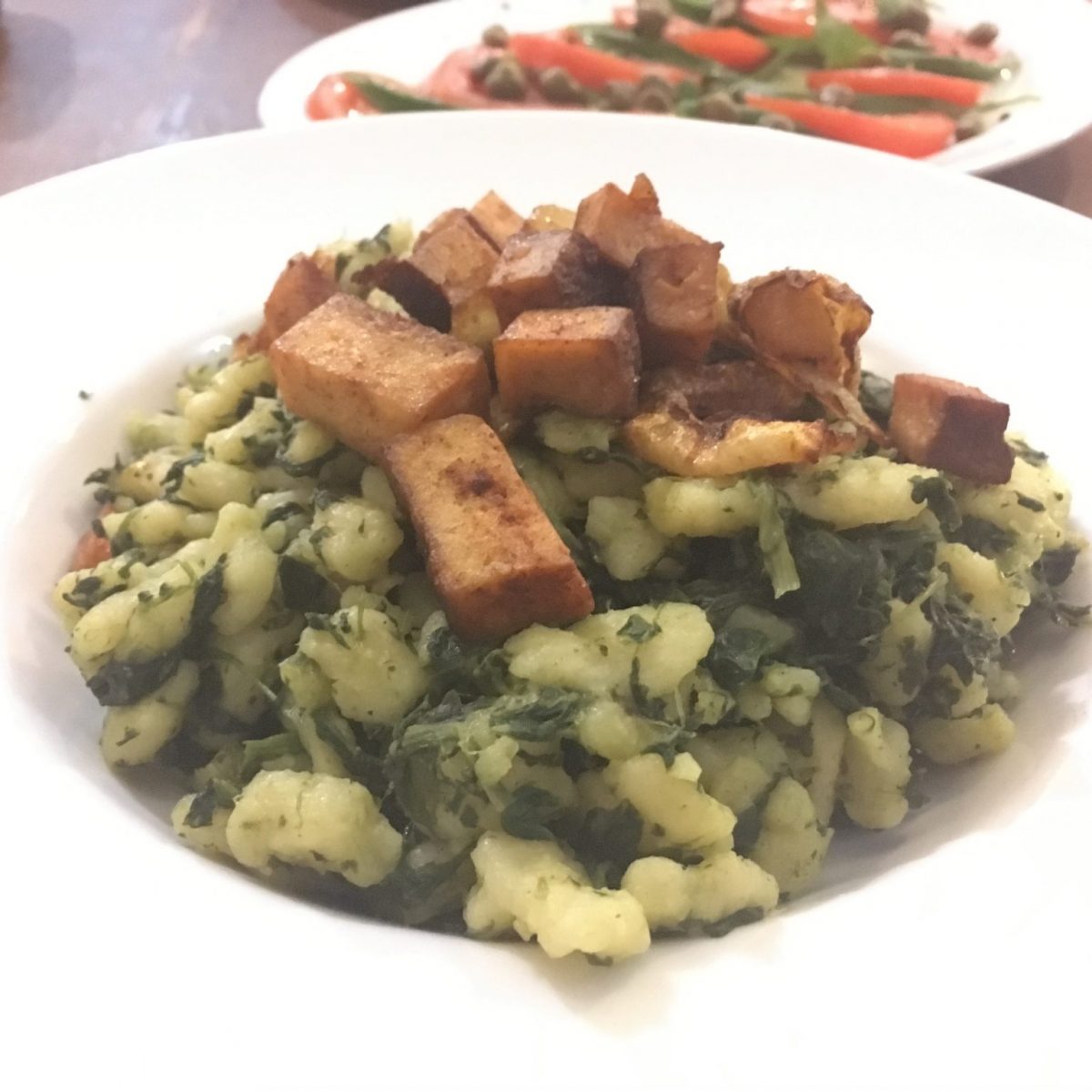 With so many great vegan restaurants in Brno, I stuck mostly to the 100% vegan establishments while I was there. Vegalité was the only vegetarian restaurant I visited, and in fact it’s also mostly vegan.

There is just a small lacto-vegetarian section of the menu that lists dishes made with cow’s cheese. If you order from any other section of the extensive menu, you can assume that if there’s cheese in the dish it will be vegan cheese.

Despite its vast food offerings, Vegalité is really more of a bar than a restaurant. They stay open until 1am most nights for the drinking crowd, but the kitchen may close earlier.

Like Forky’s, I’d say this is another place where it’s important to choose the dish that's right for you. This is a good place to try some vegan versions of traditional Czech dishes. Most of these will feature plant-based meats and/or cheeses, though, so if you prefer whole foods then perhaps opt for the chimichurri skewers instead (they were excellent!).

I chose the halušky, which is actually a traditional Slovak dish of potato dumplings. I found it to be a bit bland, though. I much preferred the vegan halušky at Ajvega in Košice, which I tried a few days later after crossing the border into Slovakia. But maybe that was my fault for ordering a Slovak dish in the Czech Republic.

In any case, the portions are quite generous at Vegalité, and the prices are very reasonable too. 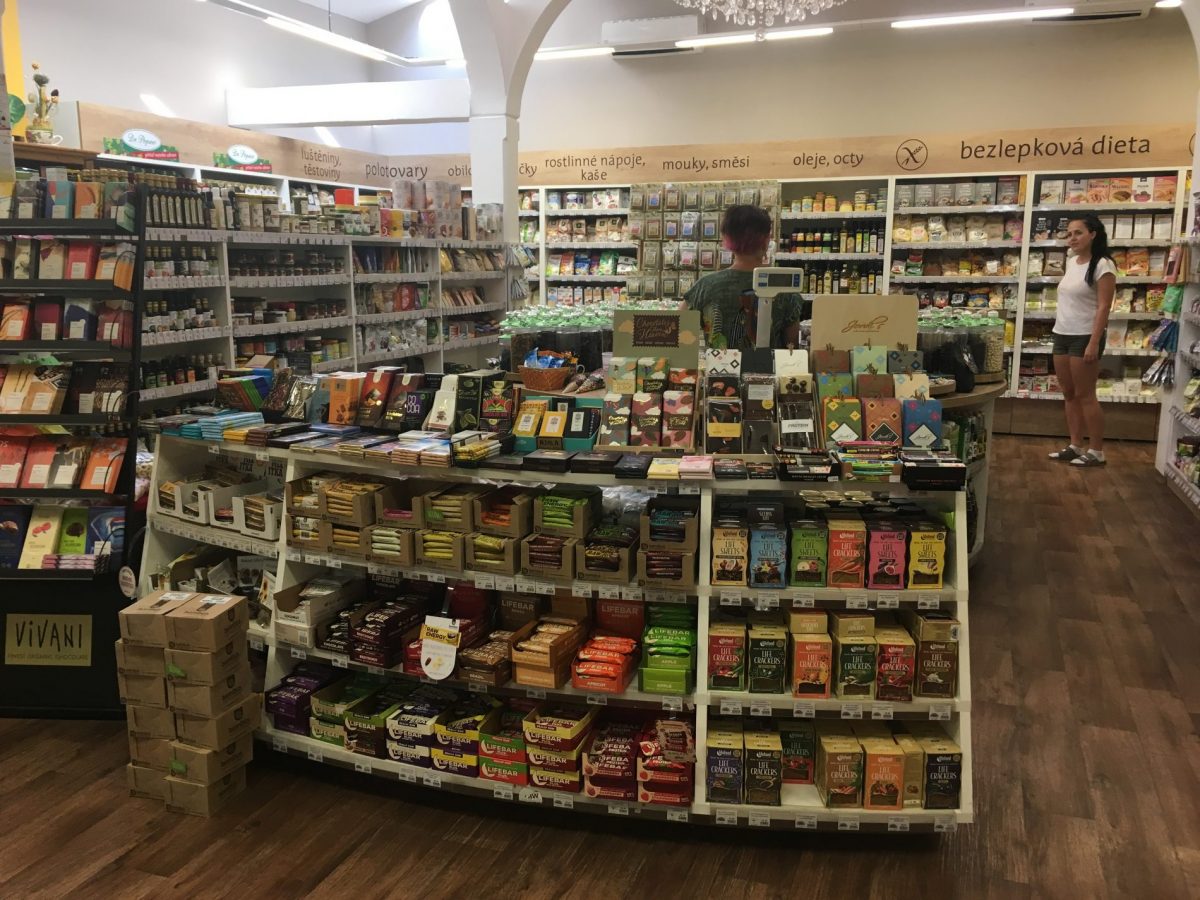 In preparation for hiking in the High Tatras mountains in Slovakia, we stocked up on supplies at Zdravá Výživa so we could do some self-catering. This health food store in the city center has lots of vegan specialty items, including plant-based meats and cheeses.

We also found hummus, vegan paté, and other types of spreads here, which were a great addition to our picnics in the mountains.

Vegan CZ Beyond Brno and Prague

So, we’ve established that Prague and Brno, the two biggest cities in the Czech Republic, both have a fantastic vegan food scene. But what about the rest of the country?

Well, smaller cities can also be surprisingly vegan friendly. Check out my vegan guide to Olomouc to see all the vegan treasures in this hidden gem of a city in Moravia.

In smaller towns and rural areas, choices will be more limited. But don’t worry, there’s always a way to make it work!

Since traditional Czech cuisine doesn’t include many vegan dishes, you’re probably best off looking for restaurants that serve other cuisines. Pasta and pizza (without cheese, obviously) are always reliable options.

If you do end up at a traditional Czech restaurant, take a look at the side dishes. You’ll usually find some type of vegetable in this section of the menu, along with potatoes in various forms. The vegetarian section is usually just two or three cheese-based dishes, but you might get lucky.

A handy shortcut when searching for vegan options is to look at the numbers listed next to each dish. These numbers are codes for common allergens, and you will see them on menus all across the country. I’m guessing it’s required by law to include this information, because almost all the restaurants seem to do it. 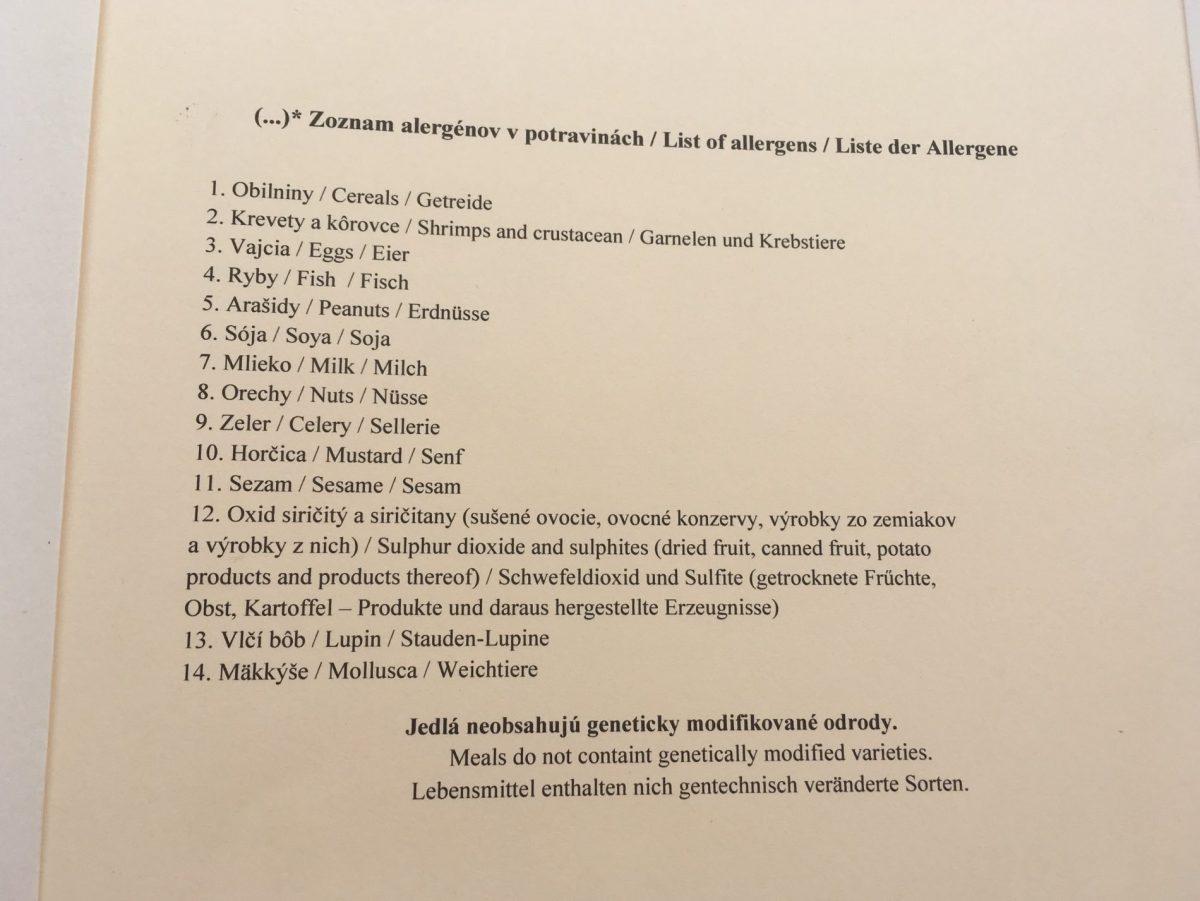 The main numbers to watch out for are 3 (eggs) and 7 (milk). Other non-vegan allergens are 2 (crustaceans), 4 (fish) and 14 (molluscs), though these aquatic animals are less likely to sneak their way into seemingly vegan dishes the way milk and eggs sometimes do.

Below is a Google Map of all the vegan  Brno restaurants described in this guide. Just click on the star next to the title to add it to your Google account. 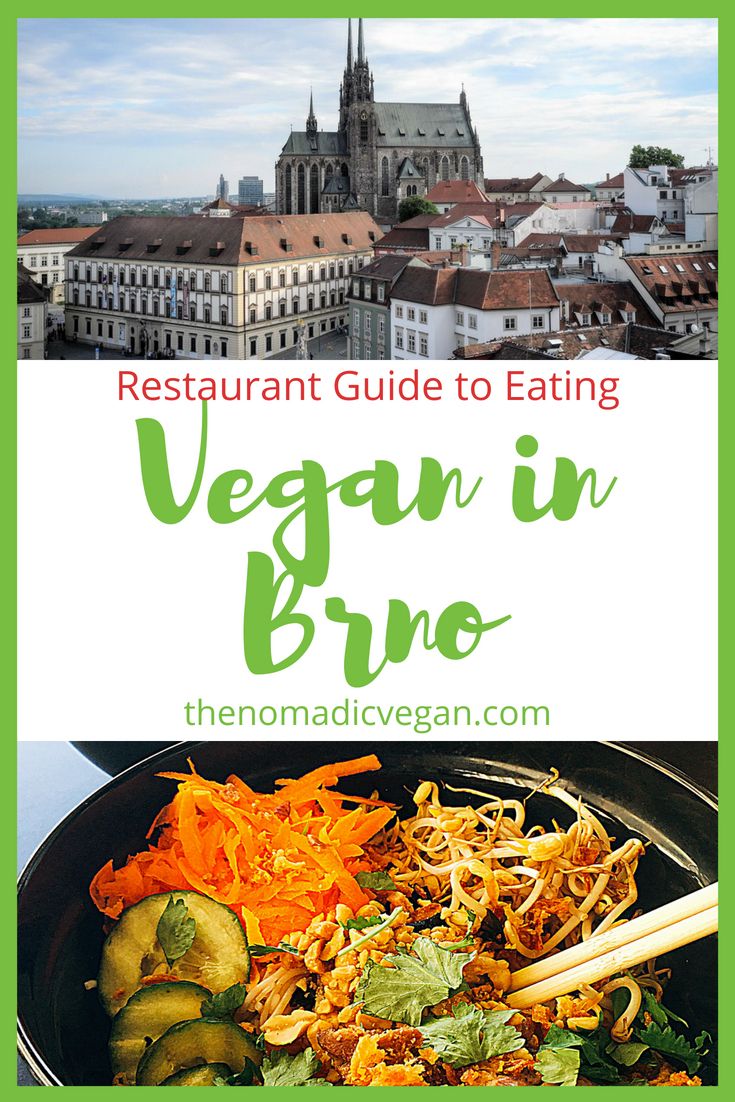 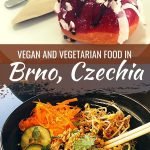 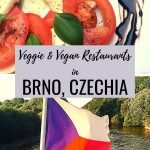