The Best Vegan Eats in Camden According to Londoners 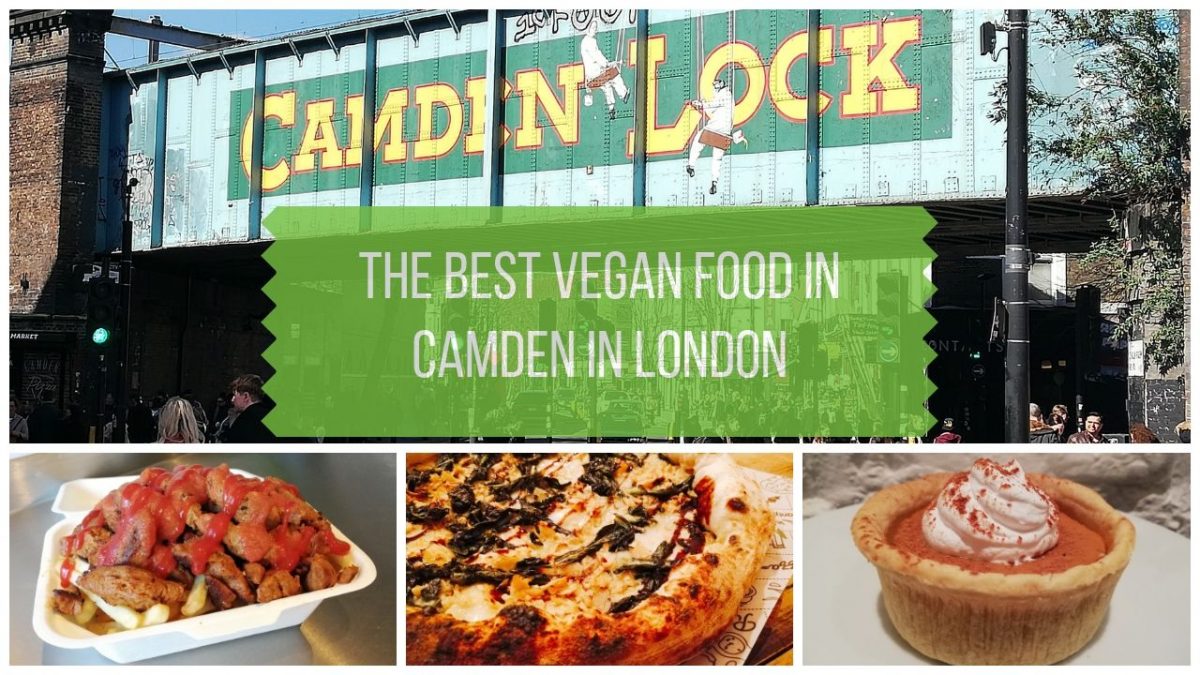 Camden has gained a reputation as one of the top vegan hot spots in London. And that’s saying a lot, because just about everywhere in London is brimming with delicious vegan options these days.

There are so many vegan restaurants and food stalls to choose from, not just in Camden Market but in the surrounding streets of Camden as well.

I wanted to make sure that I tasted the very best of all these vegan goodies, so I polled vegans in London through a local Facebook group. Fifty-three vegan Londoners responded with their recommendations for the best vegan food in Camden, and here are the results!

Most of the places listed here are fully vegan, while Mildred’s and SesamMe are vegetarian and mostly vegan. 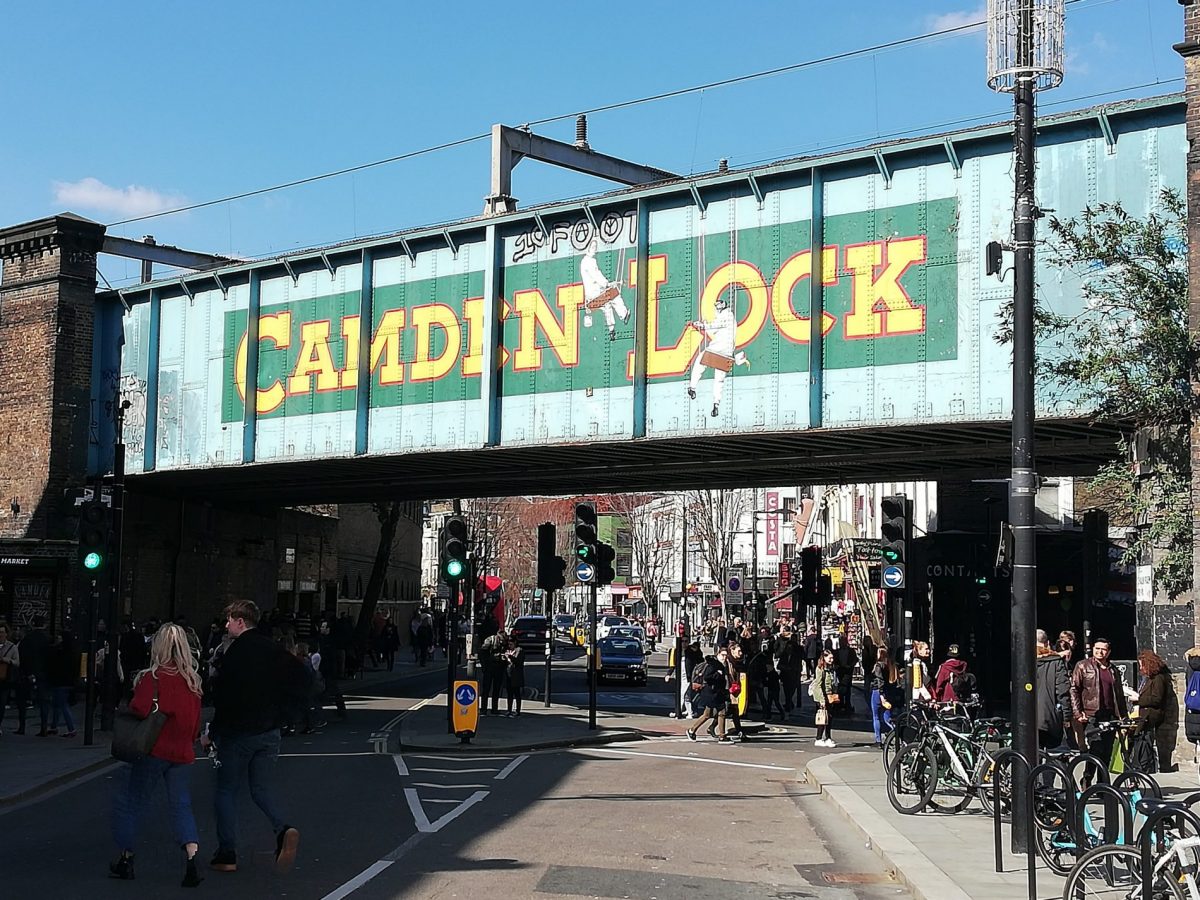 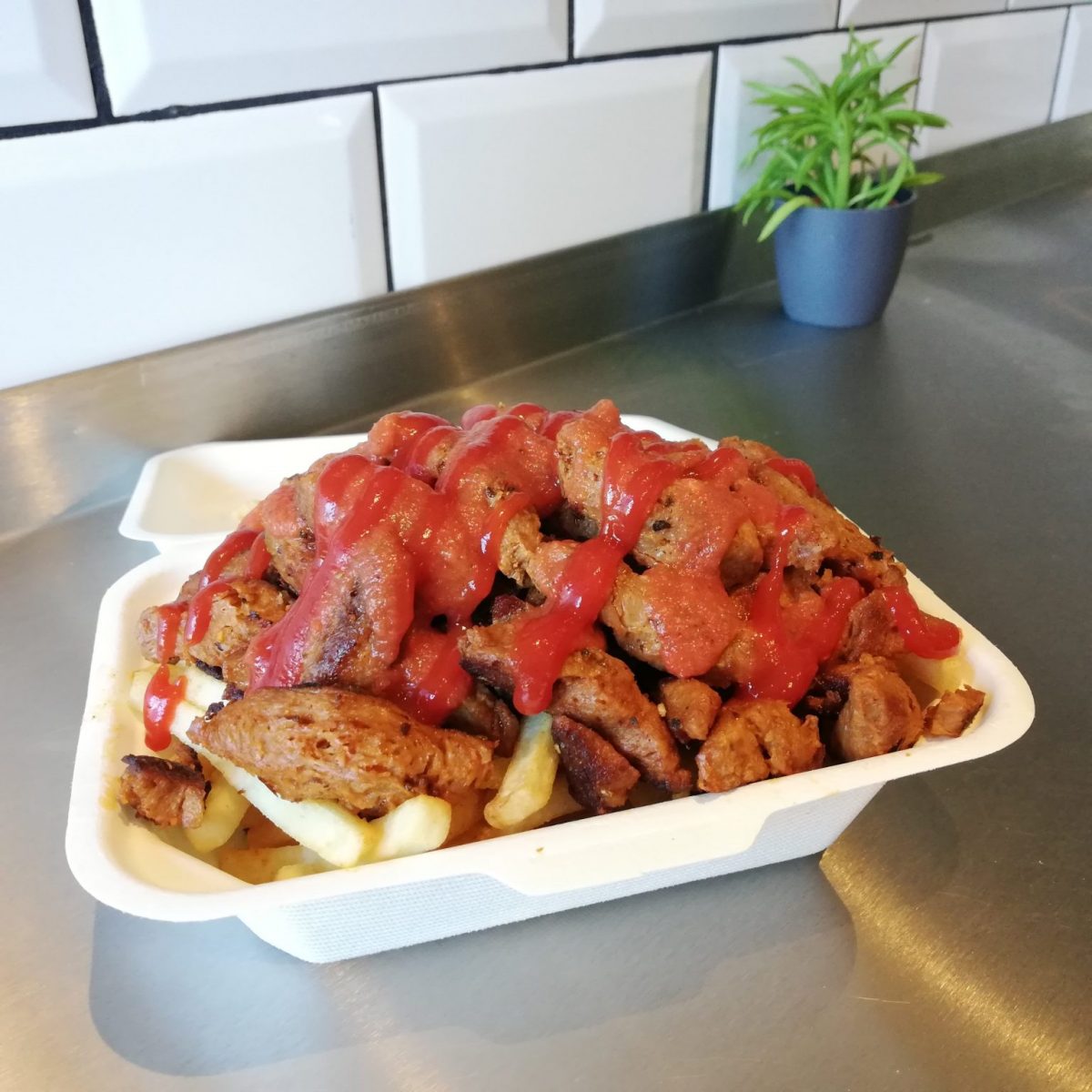 What the Pitta vegan restaurant in Camden London

This vegan kebab and falafel joint won the most votes by a long shot in my informal poll of London vegans, and I was kind of shocked. For me, a falafel kebab is a last resort when traveling as a vegan.

It’s not that I don’t like falafel -- a staple of Middle Eastern cuisine and a favorite among vegans worldwide. It’s just that it’s so ubiquitous that I tend to save it for those times when there are no other vegan options. In a place like Camden, with so many creative vegan choices, why was everyone choosing falafel?!

After eating there myself, I’m still not sure I get it, but I seem to be in the minority. What the Pitta won the title of “Best Vegan Caterer” in the 2018 VegFest UK Awards, so they must be doing something right.

The owners came up with the idea of a vegan doner kebab joint while traveling in Bodrum, Turkey, so the inspiration was, in fact, those ubiquitous Turkish kebab stands.

The difference here, of course, is that not just the falafel but also the kebab meat is vegan. For what it is, it’s very good. Plant-based meat is just not really my thing, so I didn’t appreciate it as much as others.

I wasn’t too hungry, so I ordered the doner and chips snack box, since it was a smaller portion than the other options. The box is basically a bunch of French fries (chips) topped with vegan shwarma meat and some sauce.

This was too much meat for me, and I found myself yearning for veggies. I probably should have gone with the falafel wrap after all. But if you’re craving a vegan version of a doner kebab, this is definitely the place for you! 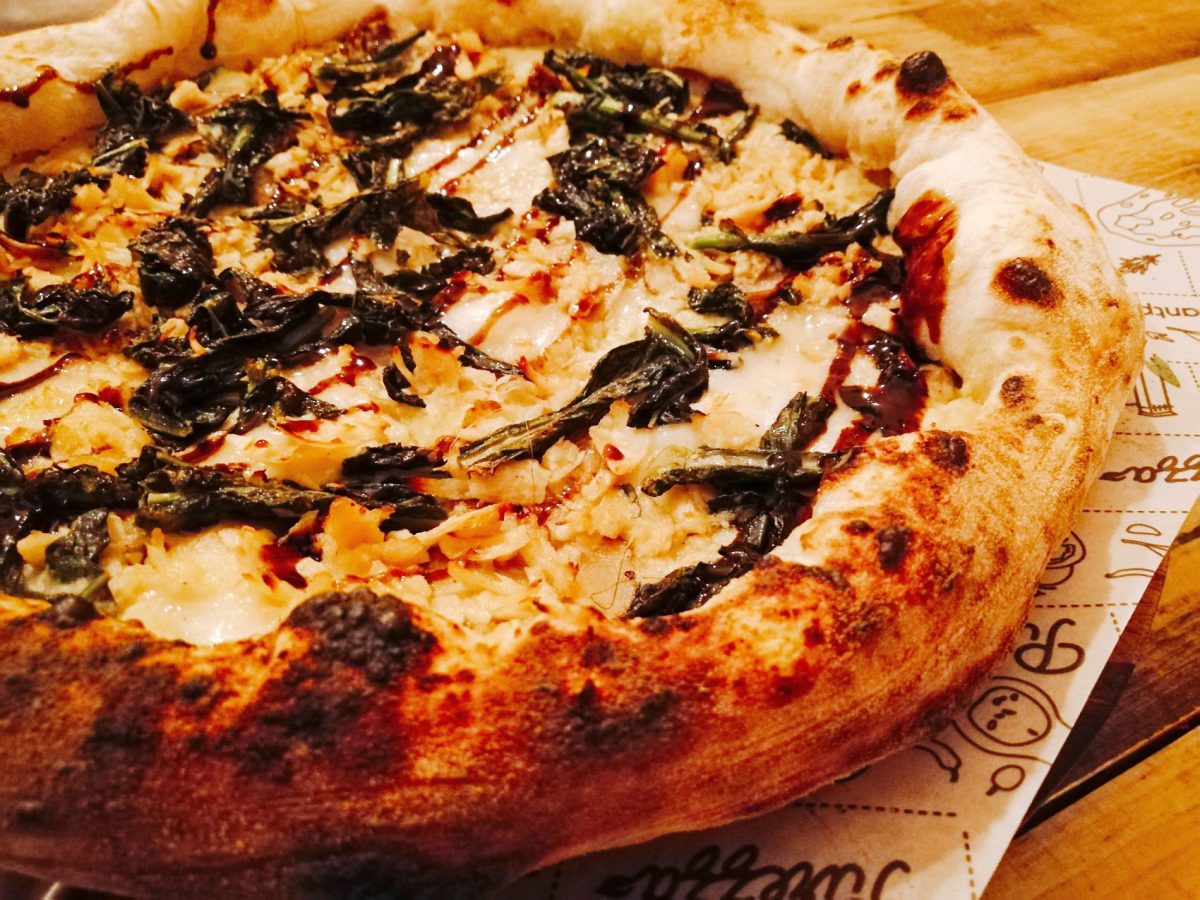 Purezza was another vegan restaurant in Camden that I had heard loads of people raving about. Unlike What the Pitta, though, this all-vegan pizzeria absolutely lived up to the hype. Their pizza is out of this world!

This is the UK’s first fully vegan pizzeria. The original location is in Brighton, a UK vegan hotspot, and they later opened a second branch in London.

Their toppings are inventive and expertly combined to create delicious flavors. The dough, despite being made from whole grain flour, tastes just as good as the highly refined dough used by the most famous pizzerias in Naples.

Read More: Check out the vegan pizza marinara at Da Michele, the Naples pizzeria made famous by Eat Pray Love.

Purezza has won multiple awards, including at the prestigious World Pizza Championship held in Parma, Italy. They were the first to ever enter a vegan pizza in the competition, and they came away as the winners of the Pizza Classica category!

It’s no surprise, then, that their pizza is loved by vegans and meat eaters alike. My non-vegan dining companion was just as impressed as I was.

Our Italian server was very knowledgeable and made helpful suggestions about what to order. On his recommendation, we chose the current special, called the Twist & Stout. This pizza was topped with Guinness-infused Jerusalem artichokes, sautéed seitan and cavolo nero (dinosaur kale) with a creamy chickpea base.

I’ve lived in Italy and have eaten countless pizzas in my lifetime, and this was one of the best pizza experiences of my life. Next time I’m in London, I’ll definitely be going back to Purezza. 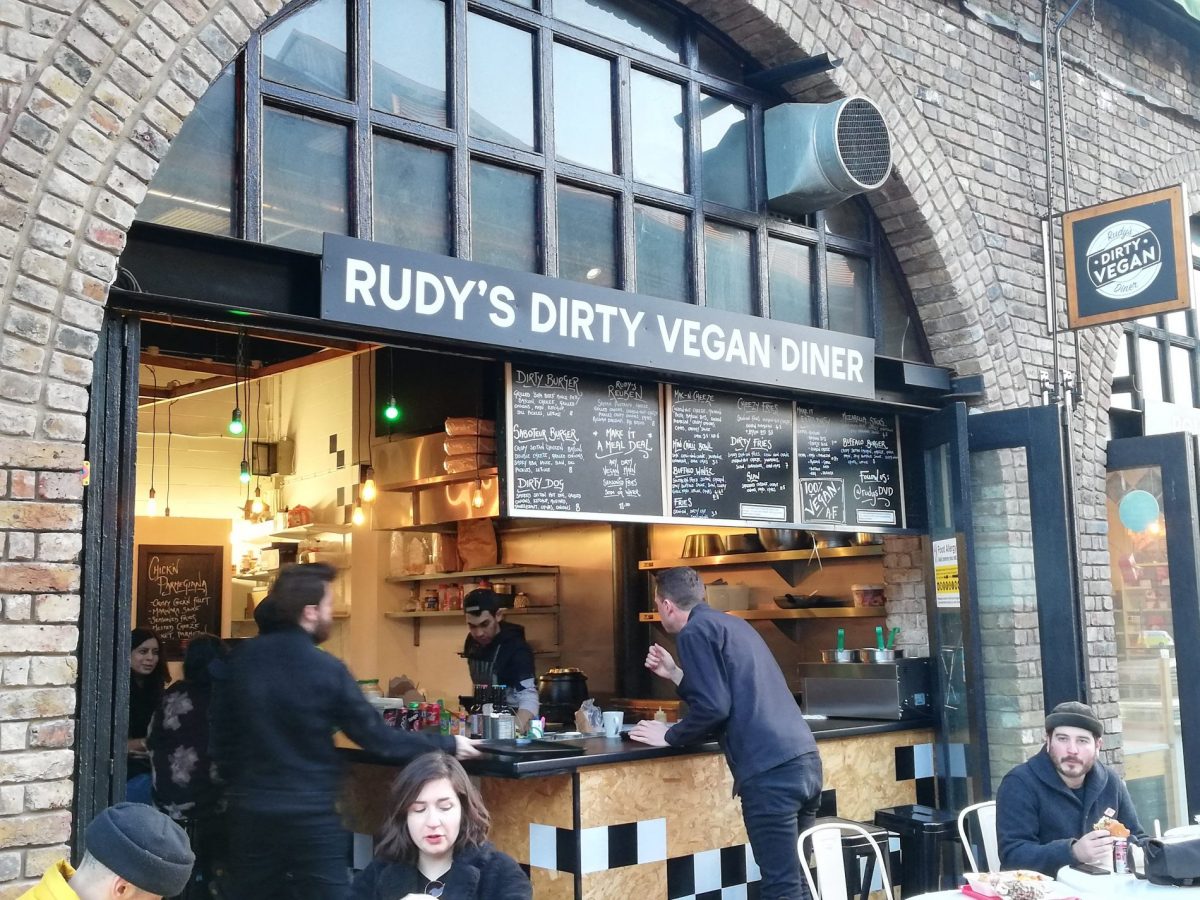 Rudy’s is one of a growing number of fully vegan eateries inside Camden Market. It’s a brick and mortar building rather than a food stall and is located in the Camden Stables area of the market.

I didn’t manage to eat here, but my friend Christy from The Blissful Chef did, and she made a fun little video about it.

Christy is a big fan of the Rudy’s Reuben, and there are also plenty of other dishes of veganized comfort food to choose from. The menu includes burgers, Mac ‘n Cheese, hot dogs, Buffalo wings and mozzarella sticks. Yum! 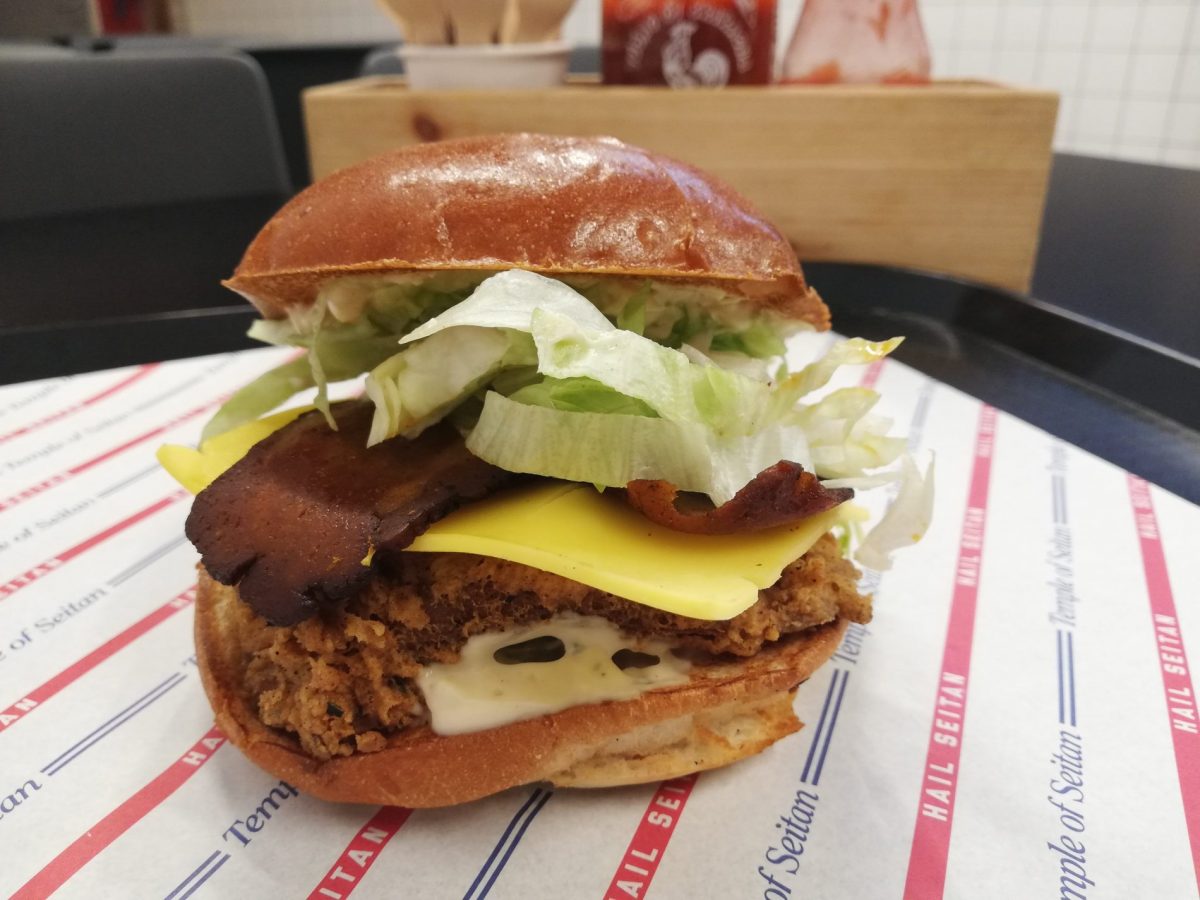 I mentioned before that I’m not a huge fan of plant-based meats, and in fact I never ate much red meat even before I was vegan. Chicken meat, though, was a different story.

In my flesh-eating days, I would almost always choose a chicken burger over a cow burger. Vegan chicken burgers are a rarity, though, so I was pretty excited to find Temple of Seitan, also known at this location as Temple of Camden.

Fried chicken burgers are their specialty. And their signature Temple Burger, topped with bacon, cheese, lettuce, pickles and a Ranch mayo dressing, did not disappoint. The décor is that of a 1950s American diner, while the vibe from the staff is more British punk. See the tip jar to get a sense of what I mean. 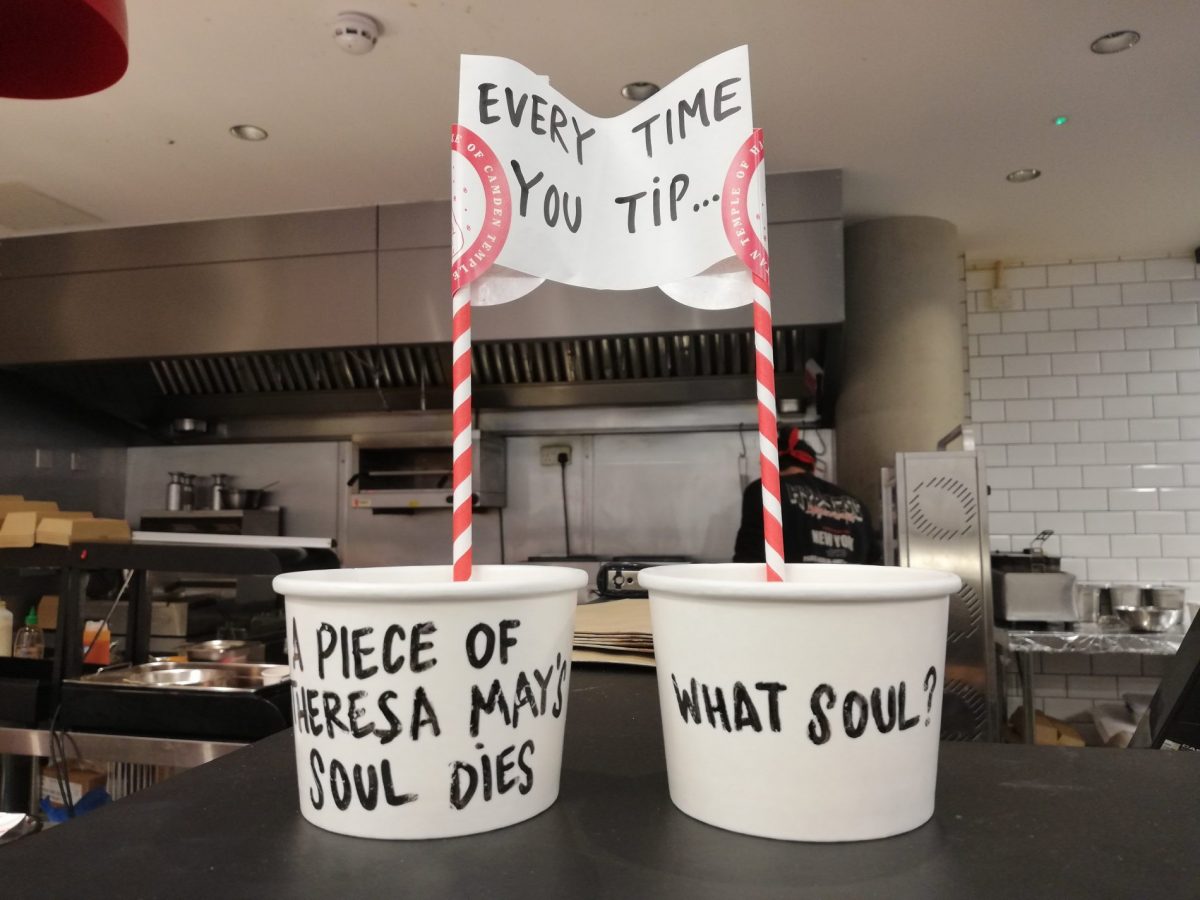 British humor - the tip jar at Temple of Seitan

Temple of Camden is a bit of an outlier on the vegan Camden map, and my brother-in-law, who lives nearby, questioned whether this location is really in Camden at all. But it has the word “Camden” in the name, so it must be, right??

The restaurant is located on the canal, next to the water and below street level. At night the area is a bit dark and deserted, so I was a little worried about coming here on my own, but I made it there and back without any incident. 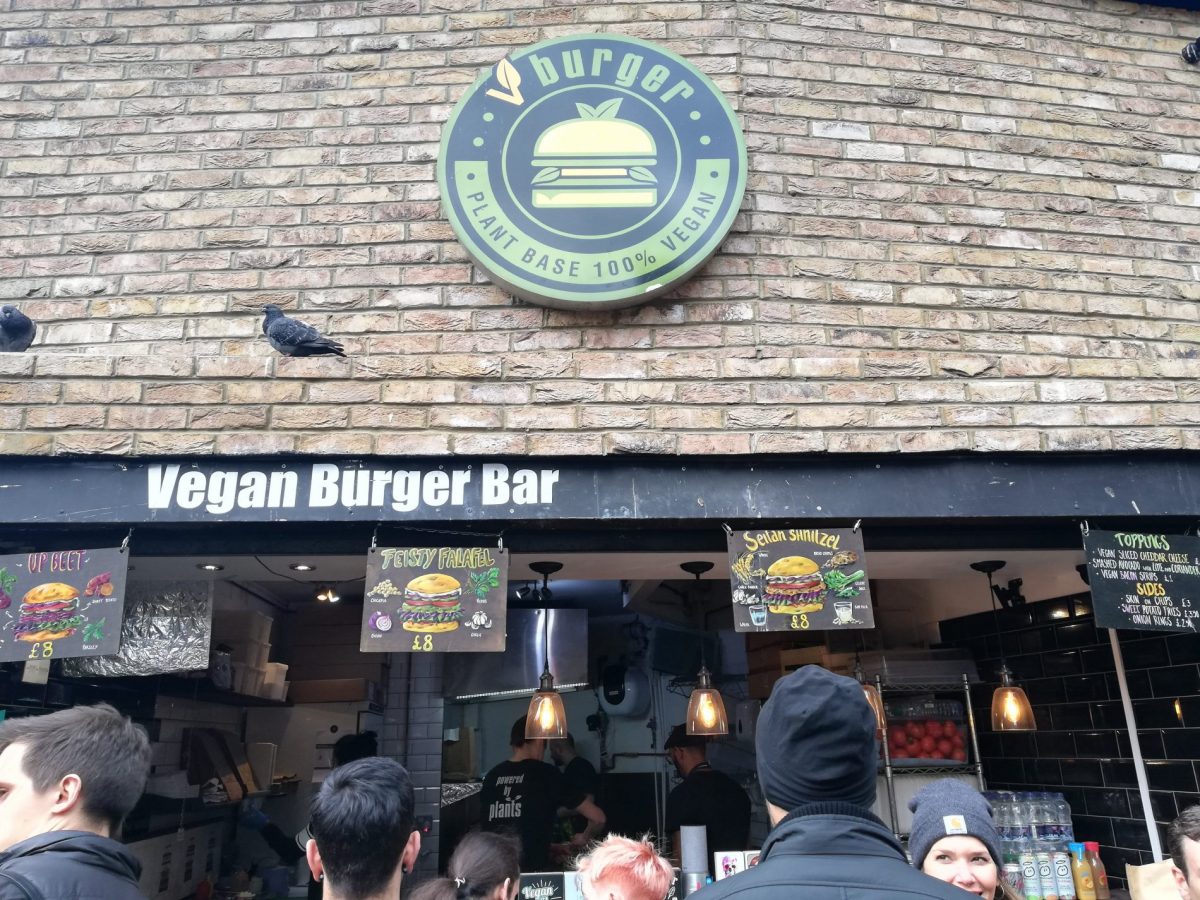 This hamburger joint on Chalk Farm Road is another place on the list that I didn’t manage to eat at during my time in Camden. A girl can only eat so many burgers!

The ones here do look good, though, and they have fun names like Up Beet and Feisty Falafel. If I was craving a burger, I’d probably try Rudy’s first, since it did get more votes in the poll, but this place also looks good. 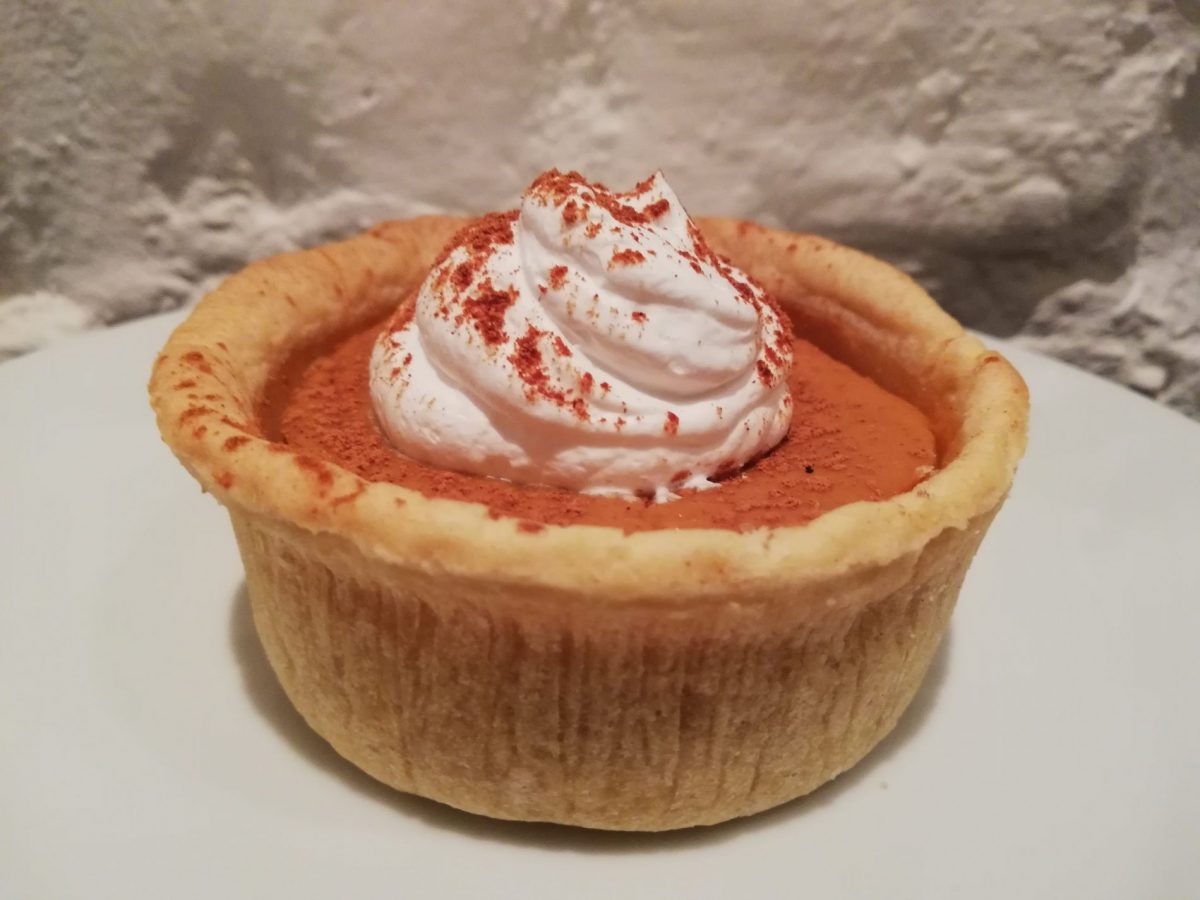 Young Vegans is mostly about vegan meat pies, but they do delicious vegan dessert pies too!

Pies are a big thing in the UK. If you’re from the US, you probably think of pies as dessert, like apple pie or pumpkin pie. But for Brits, pies are a savory affair. A pie in Britain is similar to what Americans would call a pot pie.

I’ll admit, I was most excited about the dessert pies, which Young Vegans also does really well. I sure didn’t expect to find a pumpkin pie in London, but there it was!

All of their desserts looked absolutely incredible. I’m still kicking myself for not going back to get one of their New York cheesecakes the next day.

But, oh yeah, the savory pies. That’s what most people come here for, and they’re also excellent. You can opt for a traditional steak and ale pie, or get creative with something like an all-day breakfast pie filled with scrambled tofu, seitan sausage, caramelized onions and baked beans.

I chose the chicken parmigiana pie, which was filled with vegan chicken, marinara sauce and vegan cheese, and I was happy with my choice.

Gluten free options are available, and it’s also possible to buy the pies frozen and take them home. This works out a bit cheaper and means that you can have vegan pies any time you want! 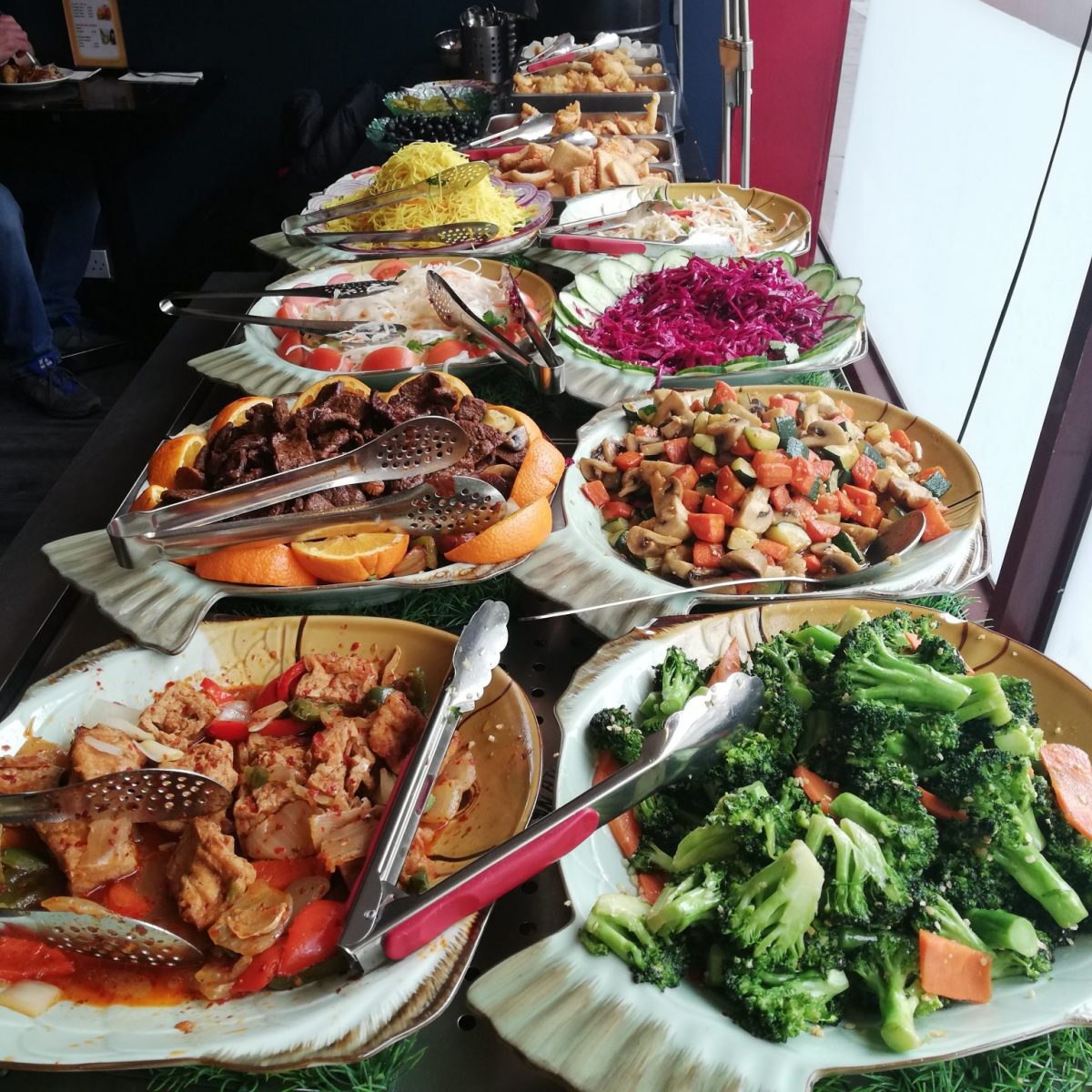 Dou Dou is a small chain restaurant that offers an all vegan Chinese buffet. It’s good value at just £6.99 for lunch and £7.99 for dinner and on weekends and holidays.

The food here is really tasty. Even though I’m not usually that into plant-based meats, the meat dishes here are done very well, and each one has unique flavors.

Dou Dou’s food actually tastes pretty close to authentic Chinese food in China, which is not the case in most Chinese restaurants. If you’re hungry and want to fill up without breaking the bank, this is a great choice. 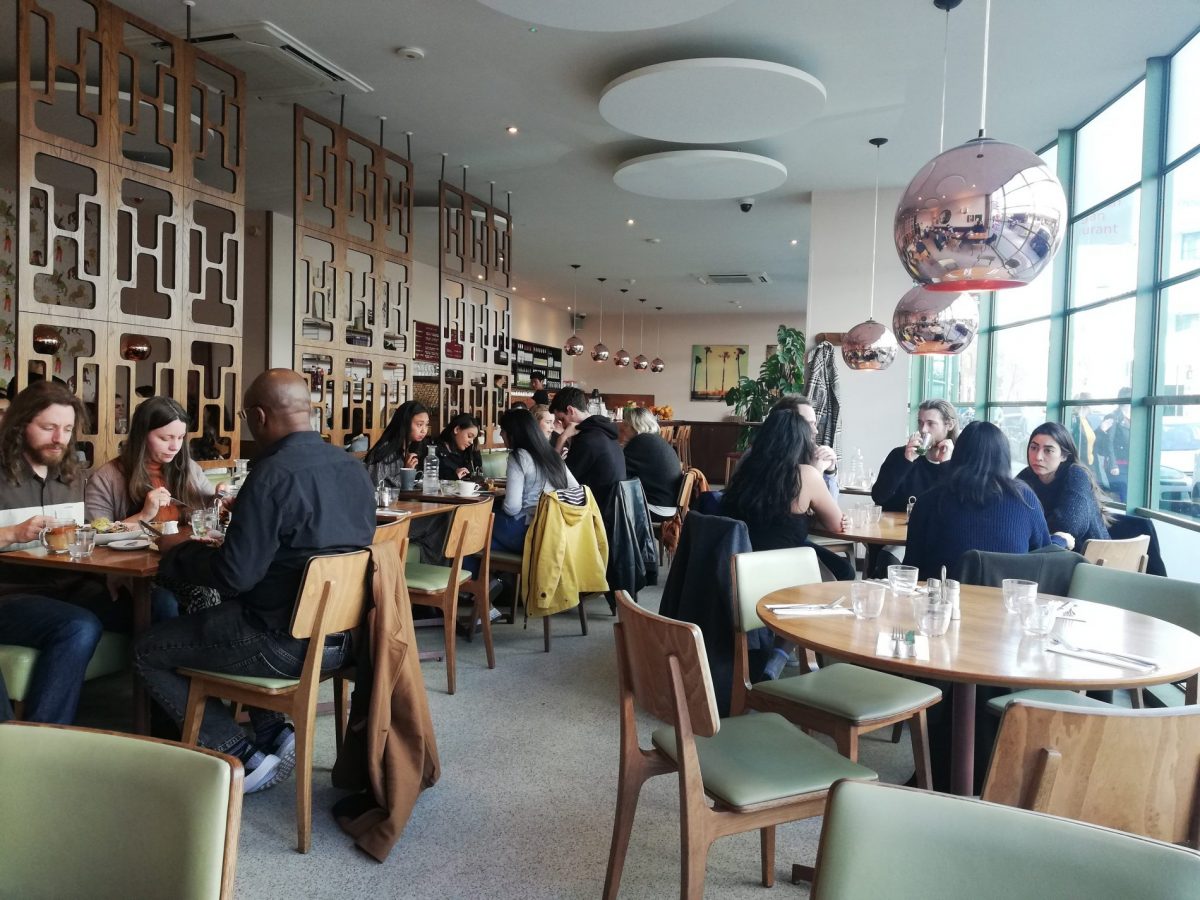 Mildred's is one of the oldest vegetarian restaurants in London

Mildred’s is a real institution in London, as it opened in 1988 and is one of the oldest vegetarian restaurants in the city. They now have four locations, including one in Camden.

While it’s not a fully vegan restaurant, most dishes are either already vegan or have a vegan option. The menu is relatively small but is packed with a mix of international flavors, from Sri Lankan curry to Caribbean jerk tofu. And for the traditionalists, there’s also a mushroom and ale pie.

I was there for brunch, which is offered on Saturdays and Sundays from 10am to 1pm. The dish I chose was a vegan eggs Florentine, which was delicious, but it seems they have already changed their menu and replaced this with something else.

Each location has a slightly different menu, so check their website before you visit if you have your heart set on a particular dish.

I searched everywhere in Camden Market but couldn’t find this 100% vegan falafel stand. It’s obviously still there, though, judging from the recent posts on their social media profiles.

Camden Market is a large, busy and chaotic place, so it’s not always easy to find what you’re looking for! But don’t worry, at the bottom of this page I’ve added a Google map of vegan Camden, with the locations of all the places in this article clearly marked.

So you should have better luck finding Magic Falafel than I did! They actually have two locations in Camden.

The first one is near the entrance to Stables Market, just one minute’s walk from the Amy Winehouse statue. This is the one marked on the map. Their second location is near Camden Lock, just opposite Camden Noodles.

They offer falafel either inside a pita or as part of their Magic Plate, which also comes with veggies and hummus. 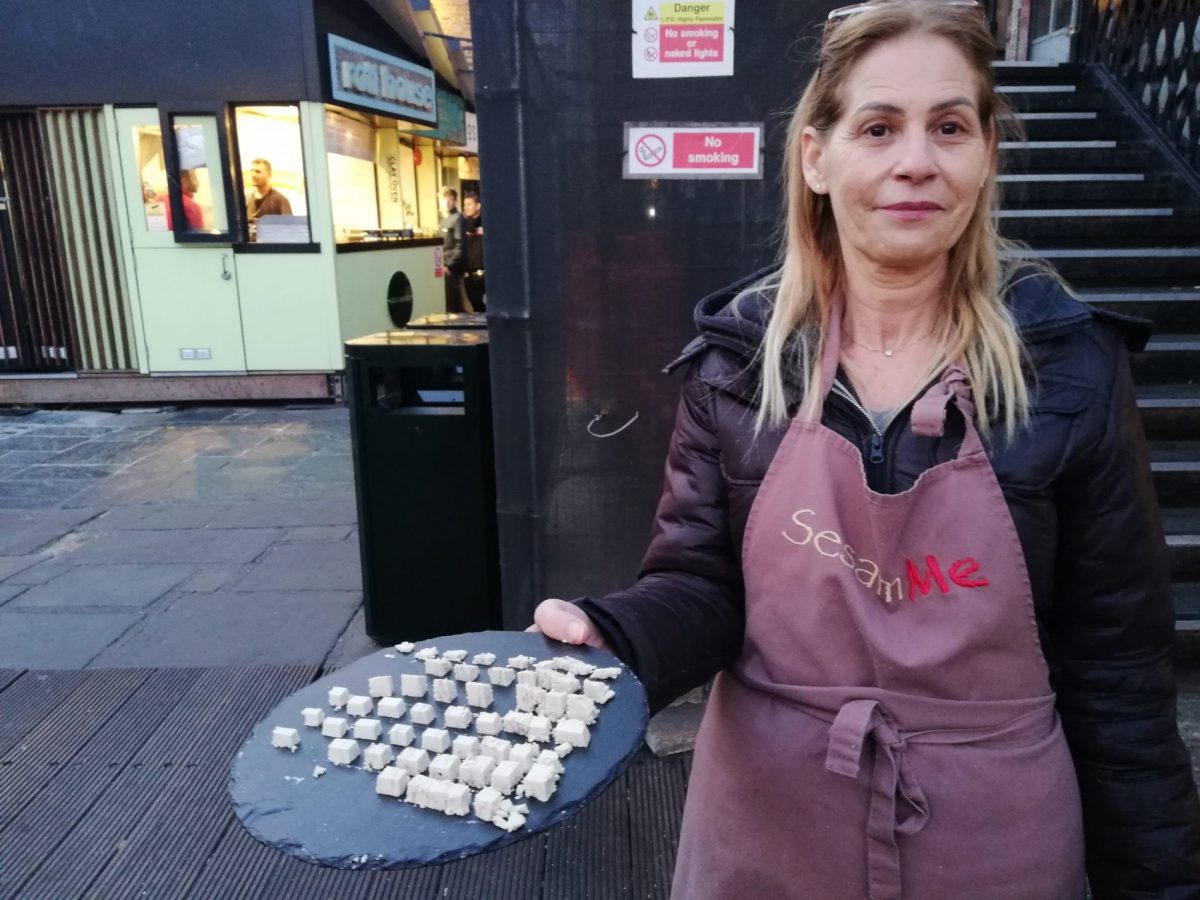 This place didn’t come up in the poll, but I was excited to stumble across it in Camden Market and wanted to share it with you.

SesamMe specializes in halwa – those sweet, crumbly blocks of yumminess made from tahini. All but one of their flavors are vegan, and they also have several types of sugar-free halwa.

They were giving out free tastings, so I tried a couple and was really impressed. I never would have guessed that this yummy goodness was sugar-free!

Below is a Google Map of all the places listed in this vegan Camden guide.

Click here to view the map in Google Maps.

And Camden Market isn't the only market in London with fantastic vegan options. Check out this guide to all the best vegan street food in the city! 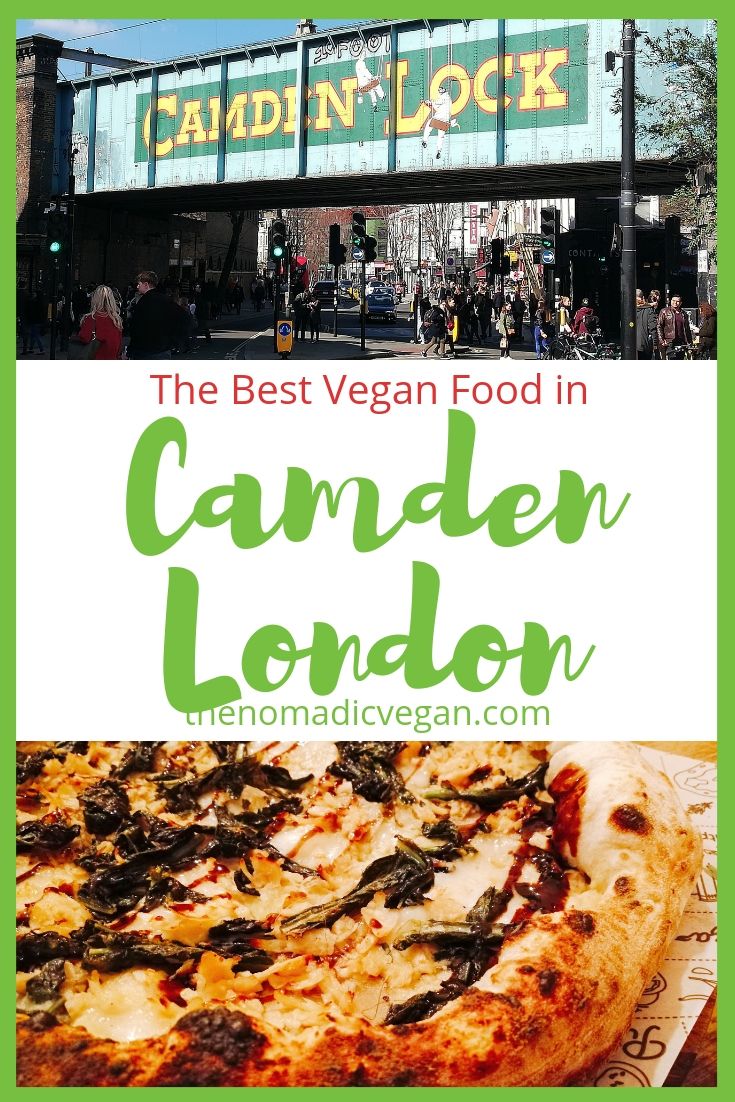 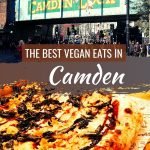 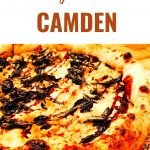