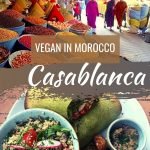 Many travelers who visit Morocco stick to the most popular touristy cities, such as Marrakesh or Agadir.

Now, don’t get me wrong, those places are great for both food and sightseeing. However, in this article I’m going to highlight a Moroccan destination that many people skip over entirely: Casablanca.

This cosmopolitan city and economic capital of Morocco has many things going for it. Its inhabitants are friendly and often speak English, it has great weather all year round, the nightlife is awesome, and its diverse architecture includes both traditional Moroccan and French colonial buildings.

I still remember the first time I visited Casablanca, and it was magical. At the time, I was living in Beni Mellal, which is three hours by bus from Casablanca. Beni Mellal is known for its fresh water, mountains, crisp air and small city feel.

I was raised in Chicago, Illinois, so while I can appreciate the small town life, I occasionally yearn for the big city life as well. Whenever I had the opportunity to visit Casablanca, I jumped at the chance!

There were two things that struck me the most when I first entered Casablanca: the palm trees and the expressway. In Casablanca, you can find a little bit of everything. Whatever you’re looking for, Casablanca has it.

As you approach the downtown area (Maarif district), you can see clubs and bars, cars blasting music, and people wearing the latest designer outfits.

In the Ain Diab district, you have the beach area. Here you can find surfers, beach volleyball players and bars along the coast. And near Casa Port, you have the train station, outdoor markets, hotels, hostels, street vendors and more.

As for tourist attractions, the most obvious one is the Hassan II Mosque. It’s the third-largest mosque in the world and the largest outside Saudi Arabia. While it’s not nearly as old as some of Morocco’s other mosques (it was built in 1993), it’s one of the only ones open to non-Muslim visitors.

Casablanca is also an artist’s city. Many aspiring artists, photographers, film directors and models all come here in search of their big break.

Seriously, Casablanca has something for anyone and everyone. The best way to describe Casablanca is like this: if Chicago and New York had a baby, you’d get Casablanca!

Morocco has its own distinctive cuisine, which is quite different from the food of other African countries and from food in the Middle East.

You won’t have to search long for a vegan meal in Morocco. Anywhere in the country, you’ll be able to find couscous, tagine and a wide variety of salads, which are all great options for vegans traveling in Morocco.

For more about these traditional Moroccan dishes that happen to be vegan, see this vegan guide to Morocco.

In addition to these common dishes, you’ll also find lentils or beans served as a stew in many smaller restaurants in Casablanca.

Most restaurants in Morocco do not put meat in the lentils, although it’s always best to ask just to be certain. This dish is normally served on a big plate with a side of bread, and sometimes a small salad.

The first time I ate this dish, I asked the waiter for a spoon, and he laughed at me. He said, “Your Arabic is good, but you still need to learn how to eat with your hands”.

One of the great things about Moroccans is how friendly and hospitable they are. After I introduced myself and explained in my broken Arabic what I was doing in Morocco, the waiter was very intrigued.

It turns out, if you can speak their language or at least try, you are welcomed with huge smiles.

After he yelled to the staff that I can speak Arabic, he pulled up a chair with his own plate of lentils and actually showed me how to properly eat with the bread. Little did I know I was coming in not just to eat but also to have a cultural lesson. I loved it!

I’m a firm believer that being nice in the world opens many doors and opportunities. Just be sincere.

Now, if you want something lighter, you can’t go wrong with purchasing fruits from the local souk, which is the Arabic word for “market.” Normally super cheap and always fresh, you can literally eat the colors of the rainbow.

In Morocco, due to the weather and climate variations, not every city will have the same fruits. For instance, you can find dragon fruit in Casablanca but not in Beni Mellal (which is located in the center of the country). Some of my favorite fruits to purchase in Morocco are figs, oranges, papaya, melons, dragon fruit and dates.

I absolutely love Casablanca for its diverse community, its lovely people and its food. While  there are not yet any fully vegan restaurants in Casablanca, there is one vegetarian restaurant and several others that are vegan-friendly.

Here are a few of my favorite go-to restaurants that cater to both vegans and vegetarians and also offer gluten free options.

The staff here will make you feel like you’re family from the start. The ambiance of this restaurant is super spacious, cozy and inviting, with pillows, puffy seats and a natural atmosphere.

While the food is a bit expensive by Moroccan standards, it’s so worth it. Also, the menu changes with the seasons. My favorites include the wrap, the Buddha bowl and the chia pudding.

Youssef is the owner’s name, and when I tell you he is the sweetest person on earth, I really mean it. He knows a good bit of English, as do some of the wait staff. So if you ever have a question about what’s on the menu, you’ll have no worries at all.

And, if you have meat and/or fish eaters accompanying you for breakfast, lunch or dinner, this restaurant caters to all eating lifestyles.

This is another nature-inspired restaurant filled with green, eco-friendly lights and comfy seating. It’s also Casablanca’s only fully vegetarian restaurant. With an upstairs dine-in location, you have plenty of options when choosing a place to sit.

My faves are the chickpea burger, soup, salad and brownie. I have been to Veggie the most out of all these restaurants, but that’s because it was the most affordable for my budget while I was living in Morocco.

For those of you coming from the USA, a full meal consisting of a burger, fries, salad and drink would cost 65 dirhams (roughly $7 USD)! Insane, right?!

Many people think you need to come to Morocco with a lot of money. In reality, though, your money will go a long way in Morocco.

Here is another beautiful and spacious restaurant with an amazing menu. I’ve only been here a few times, but when I go I usually get the nachos and falafel salad.

What I like about this restaurant is the seating. They have these amazing pillow seats and, even more importantly, outlet chargers for your phone. So, you can sit with a tea, latte or meal and charge your phone at the same time.

However, one bad thing about these seats is that they don’t have any back support. So, if you have a bad back, I recommend you find a seat with something you can rest your back against as you sit and dine.

I highly recommend you visit Casablanca next time you go to Morocco. Many people don’t give the city a chance because they believe it’s dirty or doesn’t have as much to offer as the more tourist-oriented spots.

But the fact that Casablanca doesn’t have as many tourists is a big plus in my opinion! However, this sophisticated city does have great food and amazing hospitality. Give it a go next time you travel.

Naomi is living out her dreams by living abroad and inspiring others as a wellness coach. Previously a banker, she was once tired and miserable. But all that changed when she decided to listen to the call of her heart. Now she’s passionate about helping others get on the path to wellness. Through her online platform, Diverse Vegan, she is building a community around healthy eating and veganism – with an unbiased approach.
View all posts by Naomi Israel →