Home Travel Caribbean How to Find Vegan Food in Cuba

How to Find Vegan Food in Cuba 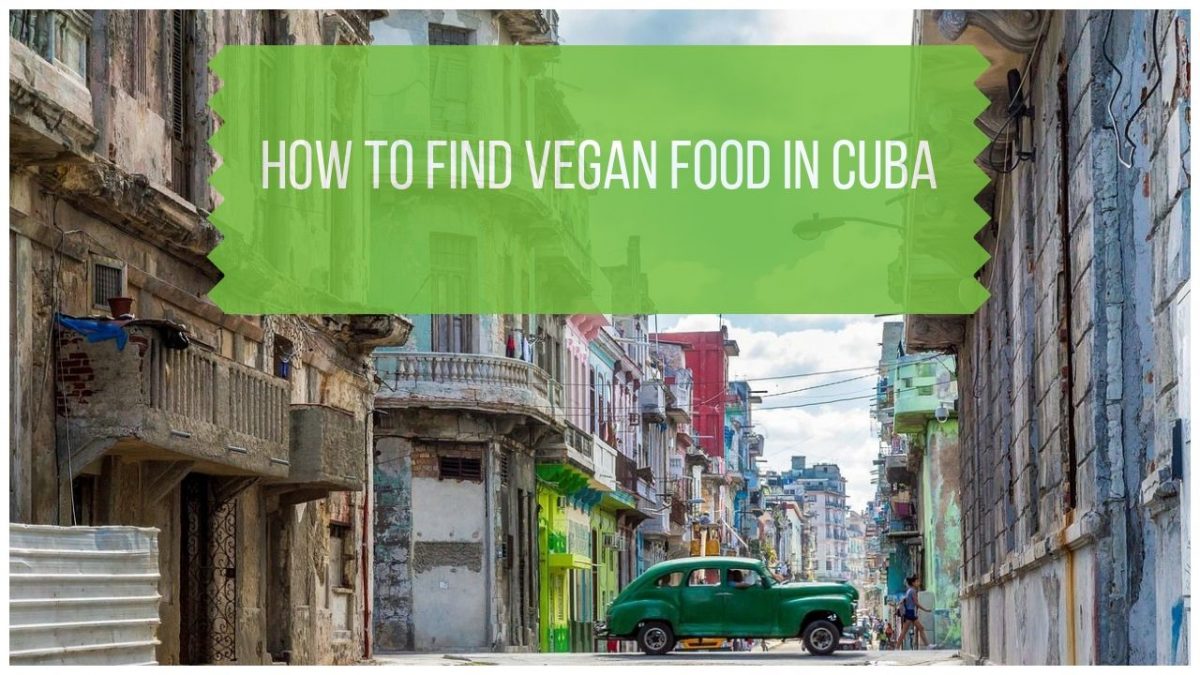 The State of the Vegan Movement in Cuba

Have you heard that it’s hard to find vegan food in Cuba? Well, that’s true, but it’s only partially true.

You’re unlikely to find vegan ice cream or mock meats, but you’ll be able to find many of the vegan staples you’re accustomed to eating back home. It just may not be quite what you were expecting.

Unlike in more veg-friendly Caribbean countries like Aruba, veganism just isn’t a thing in Cuba yet. There is no vegan culture or tradition there, but a handful of savvy restauranteurs and home chefs are noticing an increase in meat-free visitors and are adjusting their menus to accommodate the vegan traveler. 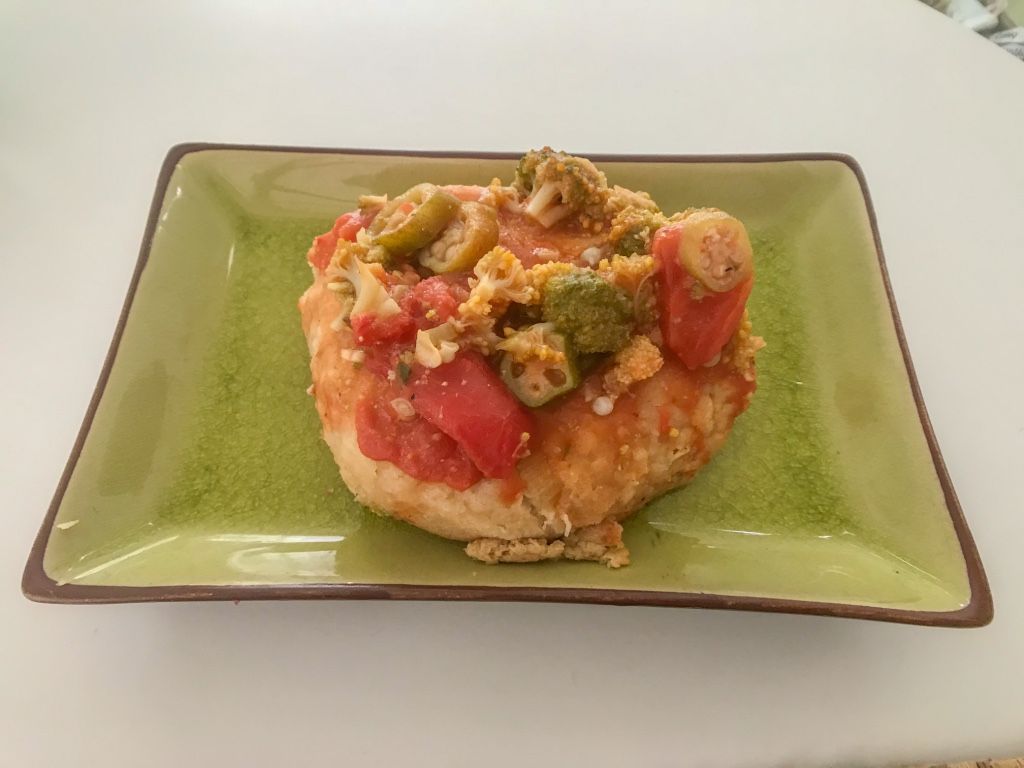 Vegan Cuba - The vegan movement hasn't really taken off yet in Cuba, but it's still possible to find vegan dishes like this one.

You might even find a vegetarian restaurant listed on HappyCow or another directory, but they don’t always last long. Check the date of the most recent review, and try to phone ahead before going to avoid disappointment.

Vegan food has become more available in Cuba in recent years, but most plant-based options will be home-cooked whole foods that harken back to the earlier days of veganism.

For anyone who went vegan in the 80s or 90s, you’ll remember mostly filling up on rice, beans, potatoes, salads, and simple foods you’d find at the farmer’s market. This is what you’ll find in Cuba today.

“Hot” new vegan dishes tend toward hummus sandwiches, and the truly exotic may include a veggie burger. For the most part, your best bet is eating at home. 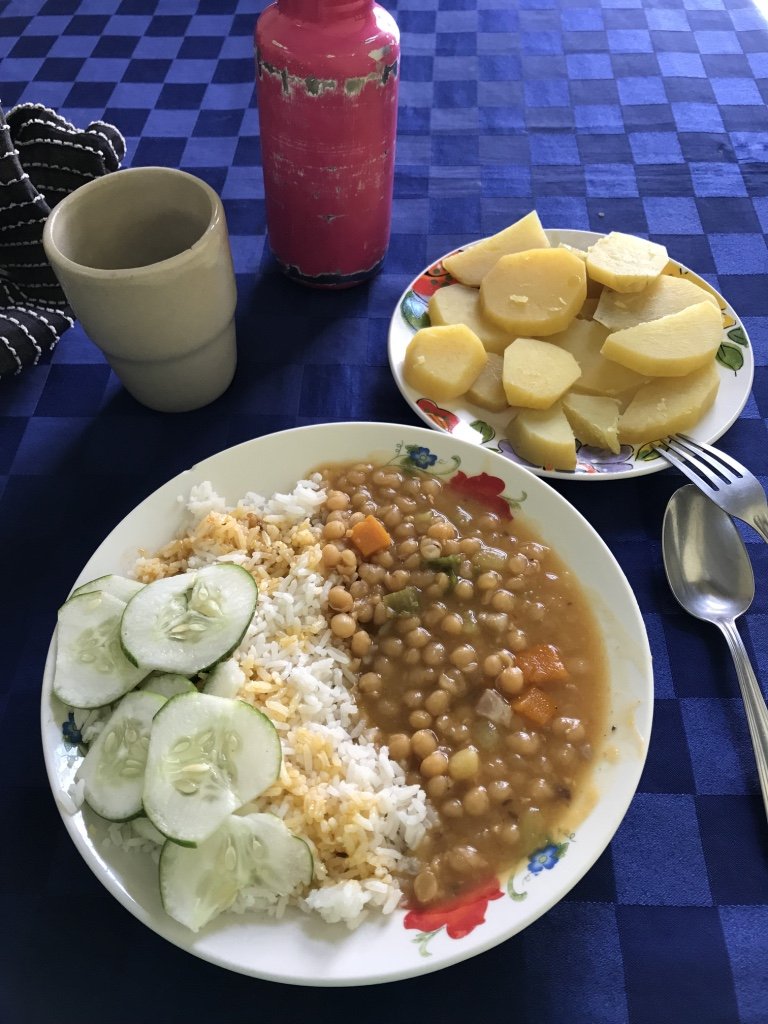 As a vegan in Cuba, you're best off eating homecooked meals like this one in casas particulares.

In Cuba, homeowners are allowed to rent out their spare rooms and apartments to tourists. These accommodations are called casas particulares. They are similar to AirBnBs, but they’ve been operating long before AirBnB launched. For more info on that, check out the article Read This Before Booking an AirBnB in Cuba.

The local people who operate casas are happy to whip up meals for their guests at a fraction of the price of a meal in a restaurant. These home chefs are also better able to handle special meal requests than are restaurants. And eating in a casa is a great way to taste some authentic Cuban cooking!

Just let your host know in the morning what you want to have for dinner, and they’ll pick up fresh ingredients during the day and have your meal waiting for you when you get home. Talk about service!

Avocado is a fantastic addition to such a meal but is only available during the hottest summer months, when temperatures soar into the sticky, sweltering 90s and 100s nearly every day.

In theory, vegetable soups would be a good option, but since vegetarianism and veganism are so unfamiliar in Cuba, many chefs are likely to add small amounts of meat or bones to the stock, despite a diner’s insistence on no meat. 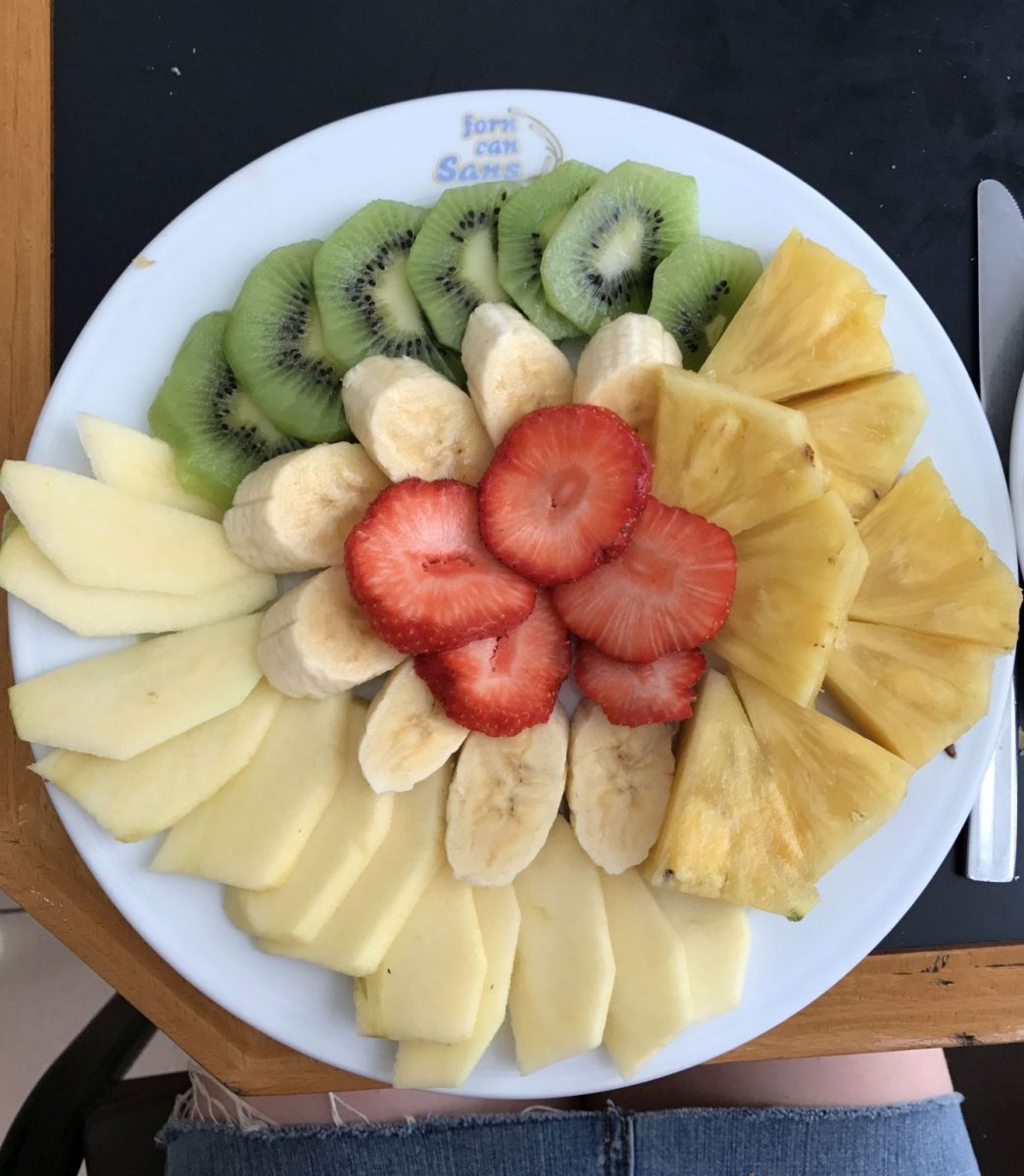 Fruit is the main component of a vegan Cuba breakfast.

Finding a good vegan breakfast in Cuba can be a bit trickier than a vegan lunch or dinner. The typical Cuban breakfast includes only bread (Cuban bread is usually vegan), butter, eggs, cheese, fruit, and sometimes ham. This costs $5 in just about every casa particular on the island. See here for more on budgeting and money matters in Cuba.

Vegans are left with bread and fruit, which is fine for a day or two but can grow tiring on longer trips. Peanut butter is an easy breakfast protein source, but it’s not readily available in Cuba, so consider packing some in your luggage for a quick protein boost.

Other breakfast foods that aren’t typically available in Cuba but are easy to pack include oats, nuts, trail mix and protein bars. See here for more vegan travel snack ideas. 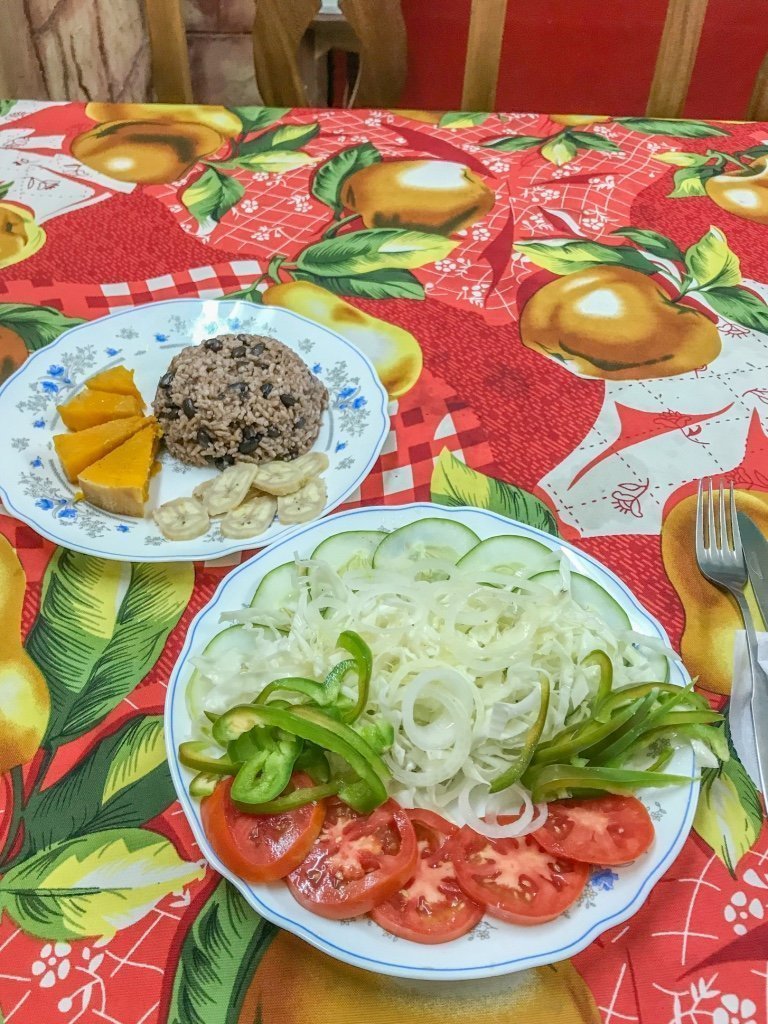 Salad and congri (rice and beans) are typical examles of Cuban vegan food in mainstream restaurants.

Typical Cuban restaurants mostly serve meat-based Cuban dishes. They may accommodate vegans with a meatless plate, but it may only have rice and cucumbers on it.

In Cuba, salads are often comprised of raw green cabbage, tomatoes, and cucumbers. As markets run out of food early in the day, restaurants are often left preparing salads with only one or two veggies, which are then served with nothing more than bland soy bean oil.

Beans are sometimes available in restaurants, but they might be made with pork and are often only served as congri. This is a bean and rice mixture that is far more rice than beans, and that also may contain pork. 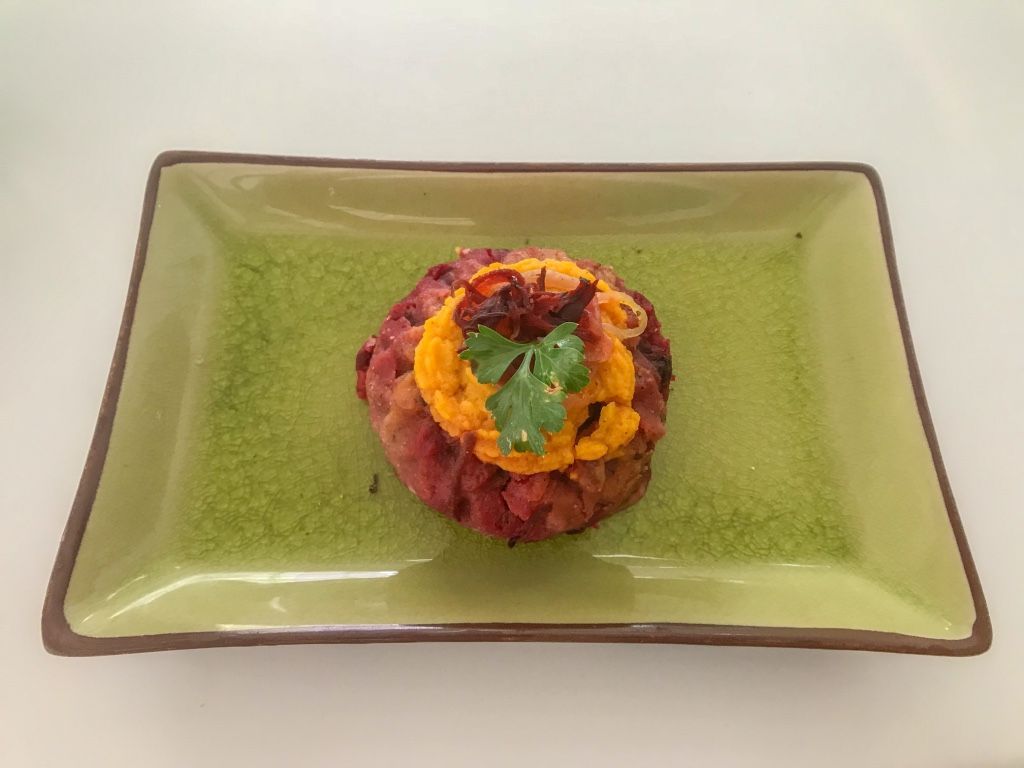 The best restaurant in Havana for vegan Cuban food is Camino al Sol.

Vegan-friendly restaurants are easiest to find in the western cities of Havana, Trinidad, and Viñales. Hummus is now available on many menus and is even advertised on sandwich boards in some popular cafés in Old Havana.

The best vegan food in Havana is found at a vegetarian restaurant called Camino al Sol Havana. It’s located outside the main tourist area of Old Havana, in the Vedado neighborhood near the Melia Cohiba hotel.

Homemade pastas and veggie burgers round out the standard menu, but the most interesting items rotate daily and can be found in the glass case when you enter. Vegetable tarts, stuffed zucchini, and yucca patties topped with okra are dramatically more interesting and varied than anything you’ll find elsewhere in the city.

El Café and California Café both serve meat but have decent vegan options by Cuban standards (mostly hummus and the occasional veggie burger).

Self-Catering as a Vegan in Cuba 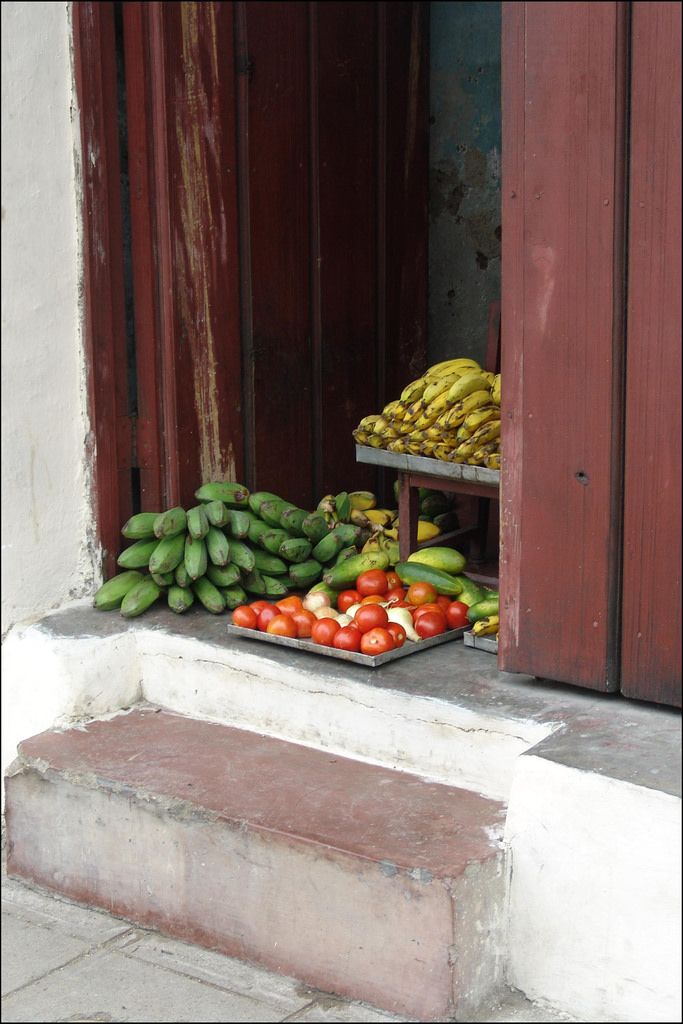 Vegan Cuban food - fruits and vegetables being sold in a doorway in Camaguey, Cuba.

Many vegans are accustomed to shopping for groceries and preparing their own meals in cities or countries with limited meatless options, and this can also be a viable option in Cuba. That said, there are a few caveats to be aware of.

Grocery shopping in Cuba requires creativity, patience, and a lot of time. One-stop shop supermarkets don’t exist, and the markets that do exist are far from super. Instead of fully stocked mega markets, locals rely on a variety of stores to do their shopping.

Sure, there are stores that resemble supermarkets, but many of the shelves are bare, and the selection is sporadic and unreliable.

Junk food, much of it imported, is readily available, but vegan staples such as peanut butter and pasta sauce are hard to come by. The most reliable items you’ll find in markets that could be turned into vegan meals are dry spaghetti, plain tomato sauce, white rice, and bags of dried beans (likely limited to black or pink).

Olive oil is available, but generic “vegetable oil” is far more common. A few dried spices can also be found, but if you plan to cook a lot, it would be worth packing your favorite dried spice mix.

For actual Cuban vegetables, you’ll need to head to a produce market, as Cuba’s quasi supermarkets only sell packaged and processed foods, none of which contain fruits or vegetables (unless you count random jars of grape jelly or olives). 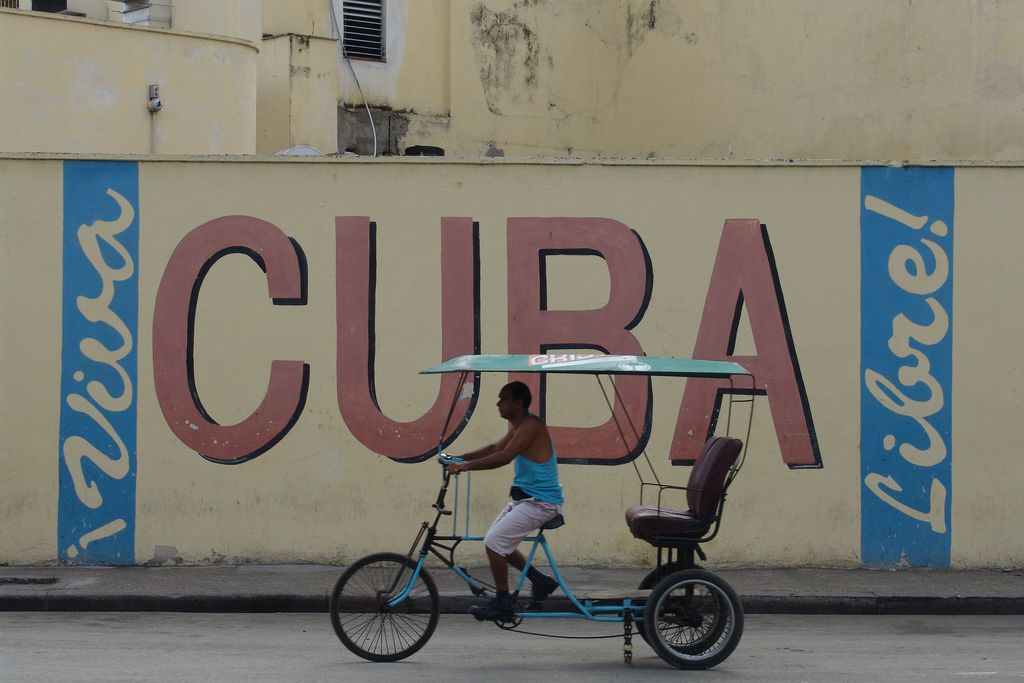 Produce markets are scattered around Cuban cities, and you could ask your host for help finding the nearest market.

A proper produce market is likely only a few blocks away, but if you can’t find one, you’ll surely run into a produce cart selling basics like bananas, papaya (known as fruta bomba in Cuba), guava, plantains, yucca, onions, garlic, and tomatoes. If you’re lucky, they’ll also have green beans, cabbage, and one of a couple types of orange squash found in Cuba.

In general, the variety of fresh produce found in Cuba is extremely limited, and markets run out early, so it’s best to shop in the morning. Aside from cilantro or the occasional bunch of parsley, fresh herbs are hard to come by. 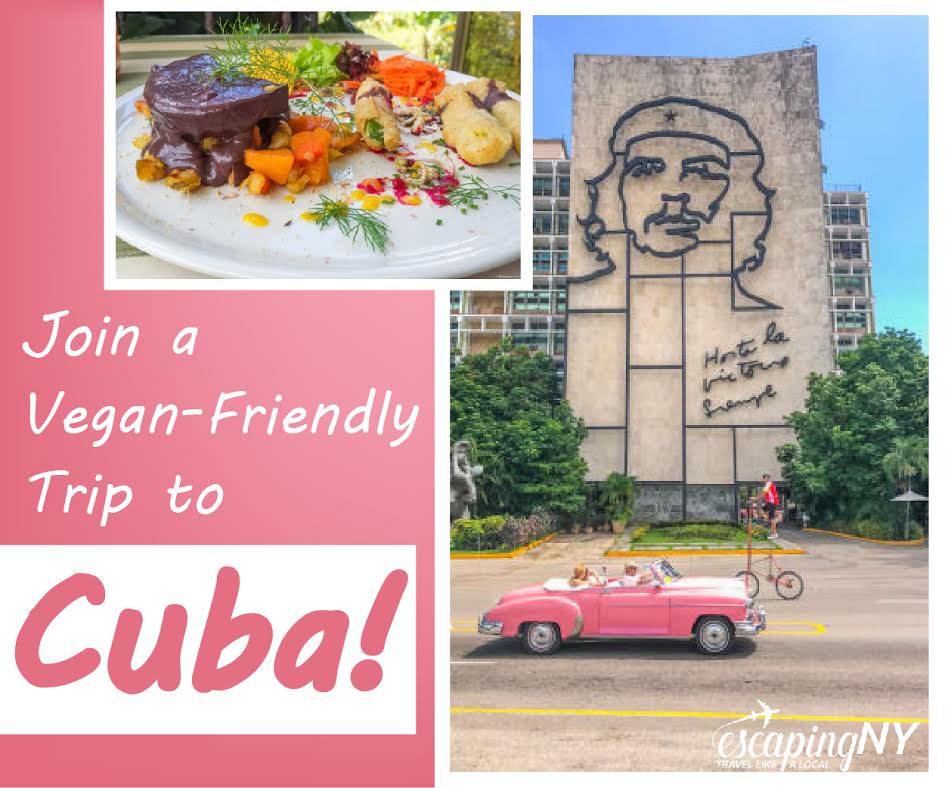 Join Cassandra on her next vegan-friendly trip to Cuba!

Many proper produce markets also sell bags of black and red beans, making one-stop shopping slightly easier. Grab a bag of rice at the store (or purchase potatoes for your starch), and you’ve got yourself a well-balanced vegan meal.

Shopping for your own produce can mean more varied (and cheaper) meals during extended visits, but given the challenge required to find veggies in Cuba and the low price of home cooked meals, eating at the casa is often a far better option.

For more tips on finding vegan food in Cuba, check out EscapingNY.com, where you can download a vegan survival guide to Cuba for your upcoming trip. You can also find more info about vegan-friendly group trips to Cuba, the Legality of Traveling to Cuba, and How to Pack for Cuba. 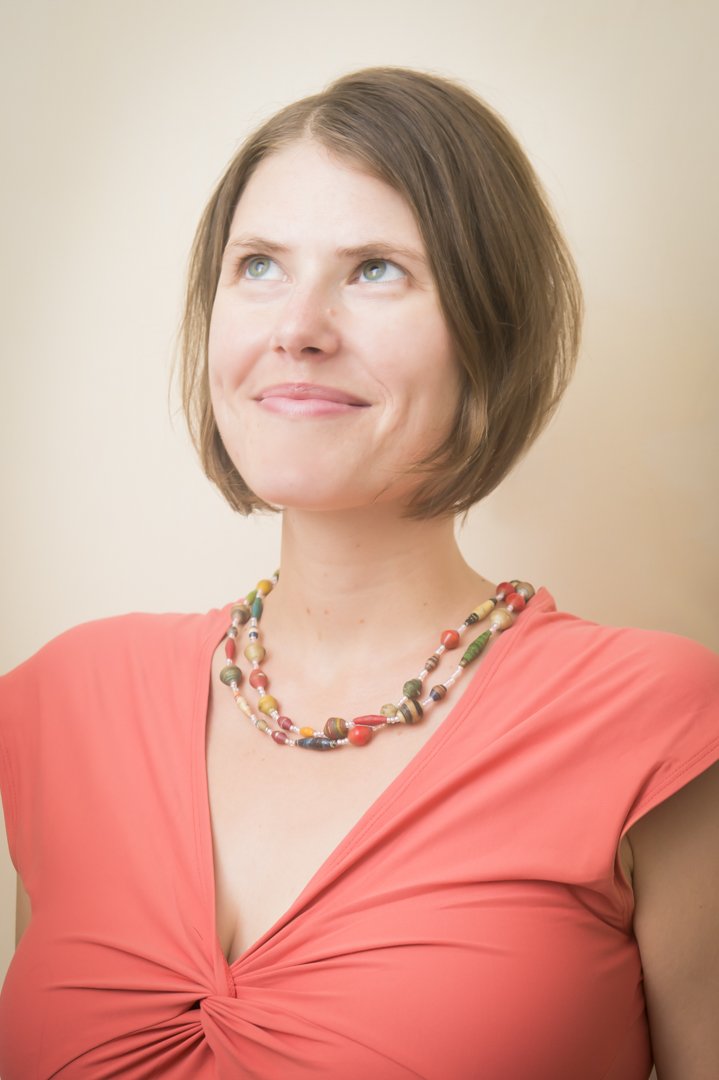 Cassandra Brooklyn is a New York City-based travel planner and group tour leader and the founder of EscapingNY, a travel consultancy specializing in off-the-beaten-path travel. She leads vegan group trips to Mexico and Cuba and will launch new trips to Jordan and Peru in 2019. When she’s not traveling, you can find her at home in NYC, leading graffiti and vegan food bike tours. Follow her at @escapingny on Facebook, Instagram and YouTube. 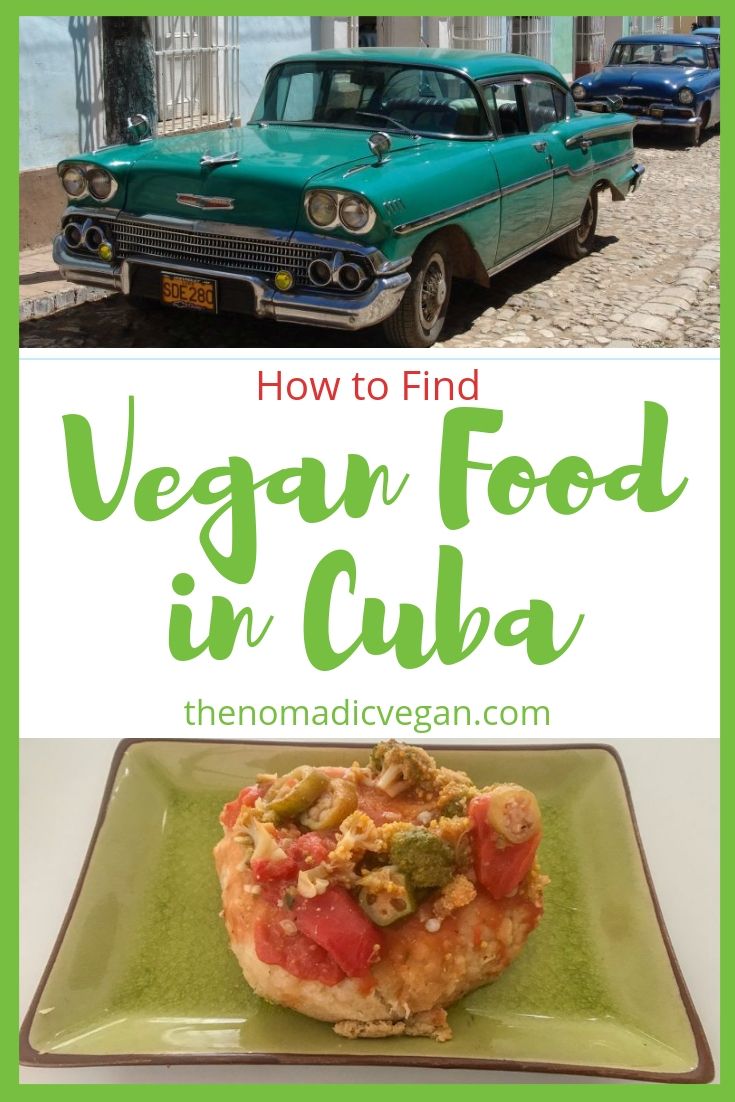