Vegan Dining in an Old Venetian Ruin in Chania

From Rethymno we headed west down the coast to Chania, a beautiful Venetian harbor town that just oozes old-world charm. Mykonos may have a neighborhood called Little Venice, but Chania was actually settled by the real Venetians in the 13th century.

We had visited Rethymno first because we imagined that it would be like Chania but without all the tourists. In reality, though, Rethymno has plenty of tourists of its own and, while the fortress is impressive and our stay there was certainly enjoyable, in my view it doesn’t hold a candle to Chania. 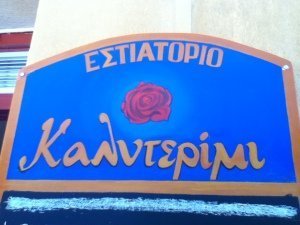 As soon as we arrived we went for lunch at a restaurant in the backstreets called Kalderimi, which was fantastic. I’m beginning to sound like a broken record here, but honestly, just about every meal we had in Greece was fantastic. That’s not to say there isn’t bad food out there, though. In Chania in particular, I would advise against eating at the waterside restaurants right on the harbor in the center of town, as they were very obviously catering strictly to tourists and trying to capitalize on their location.

Every meal in Greece starts with bread, but in this case it was delicious warm garlic bread served with a tomato salsa-type dip for spreading. 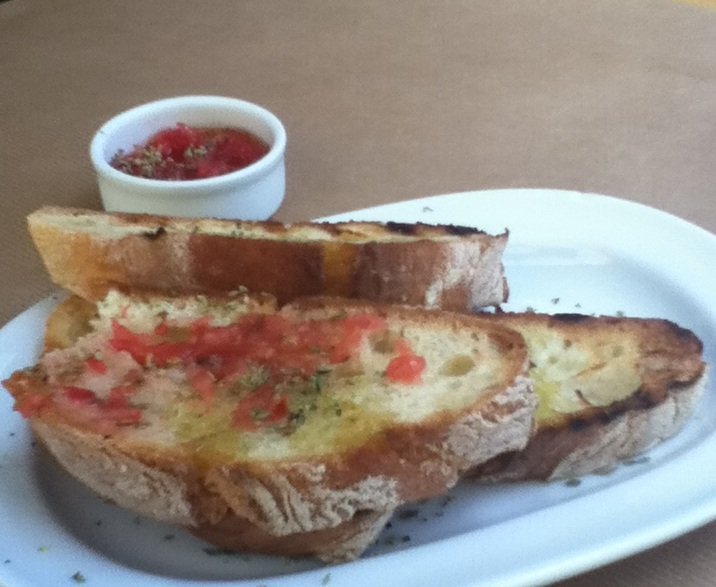 This was followed by yet another pie – this one filled with fennel and local greens – and an order of stuffed vine leaves and stuffed zucchini flowers. 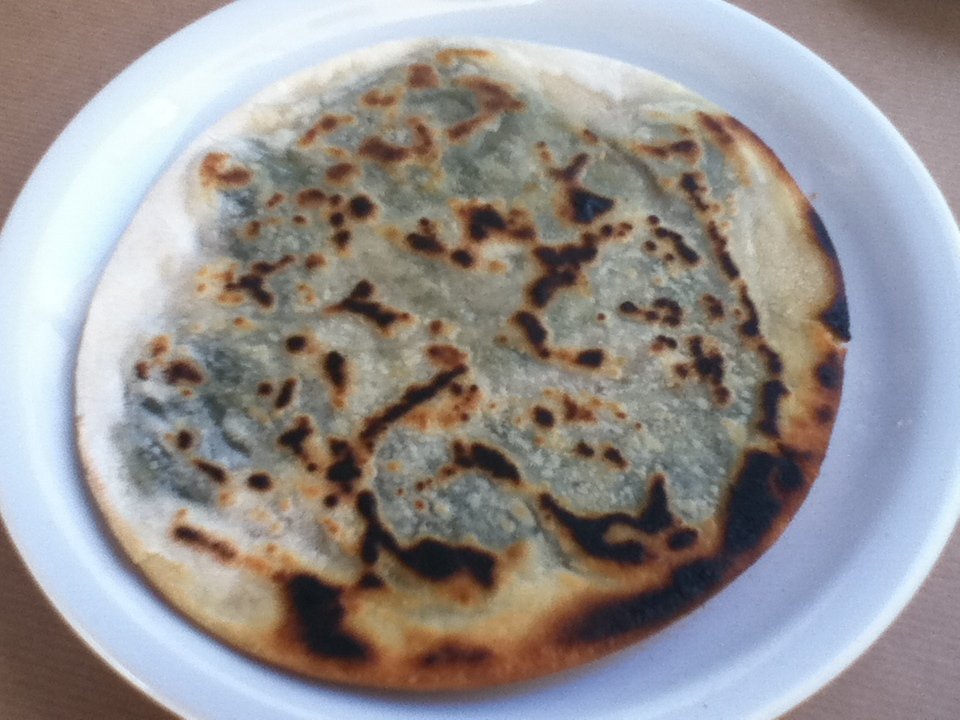 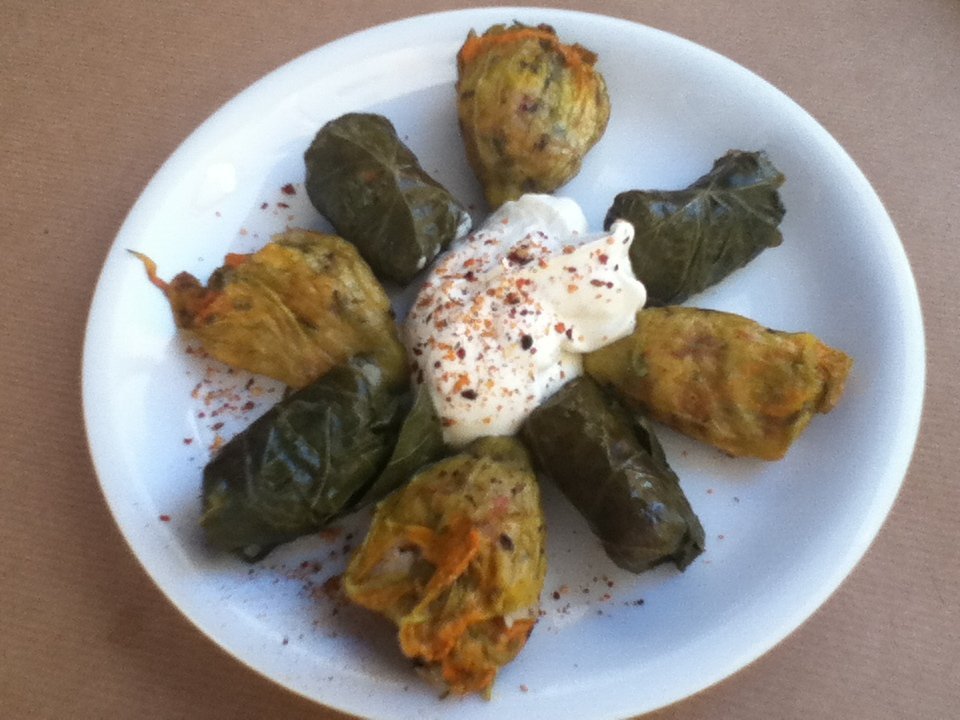 The latter is a local Cretan specialty that you should definitely seek out while on the island. Stuffed vine leaves are common throughout the country, but stuffed zucchini flowers?! I only ever saw them on Crete. As you can see in the photo, it was served with a dollop of yogurt, so be sure to ask the server to leave this out. Or, you could try asking them to substitute it with skordalia (a garlicky dip made from mashed potatoes), but make sure the skordalia is nistisimo.

For dinner we ate at what turned out to be one of our favourite restaurants of the whole trip – To Steki Tavern. While there is a large indoor dining area, the most atmospheric choice by far is the al fresco dining area in the ruins of an abandoned Venetian building, with traditional Greek music playing in the background. Honestly, can you get any more romantic than this? 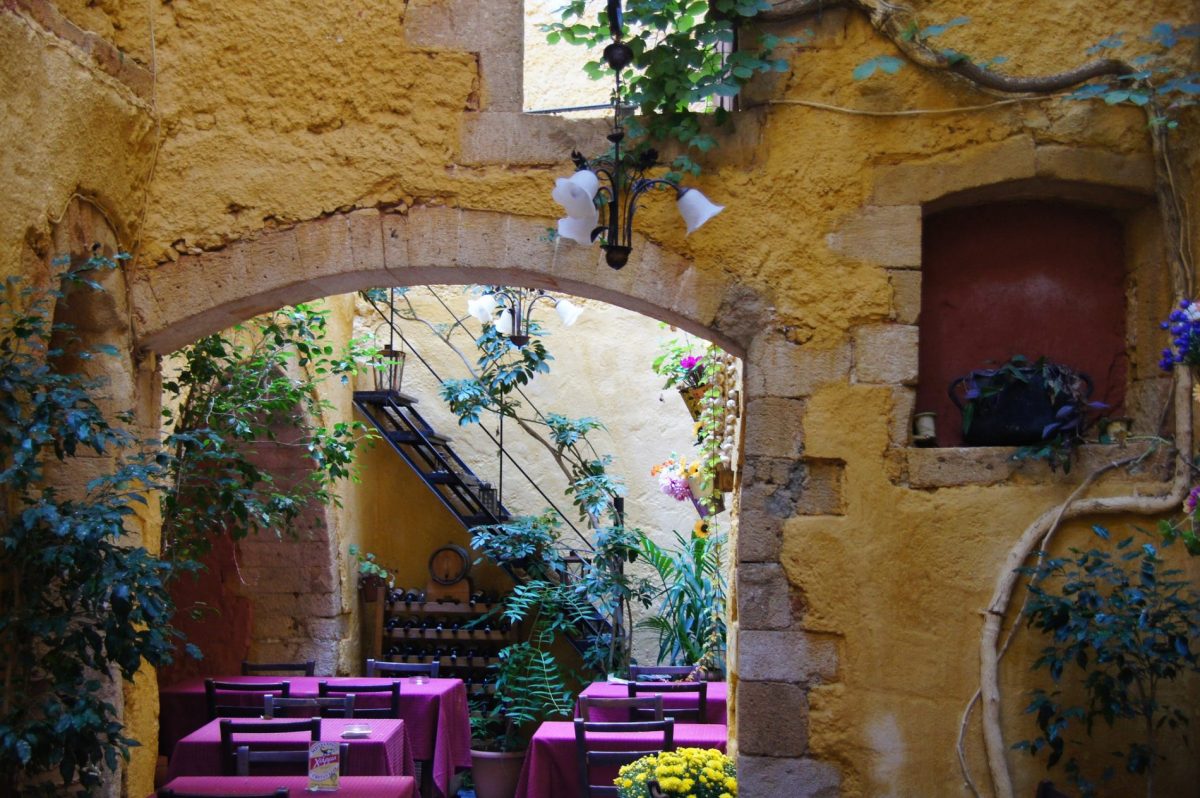 As a starter I chose the tomatokeftedes, translated as “tomato balls” on the menu. They might be more accurately described as patties or fritters but were delicious whatever you wish to call them. 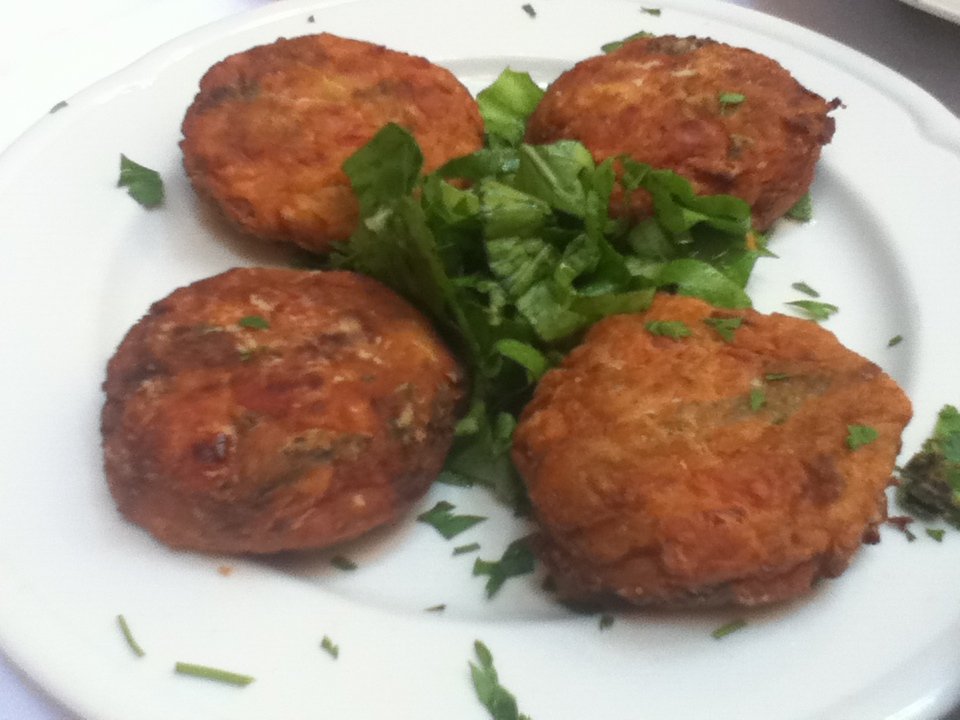 My main course was eggplant stuffed with vegetables (and normally also stuffed with feta cheese, but they were happy to leave this out), served with a side of thick-cut French fries. 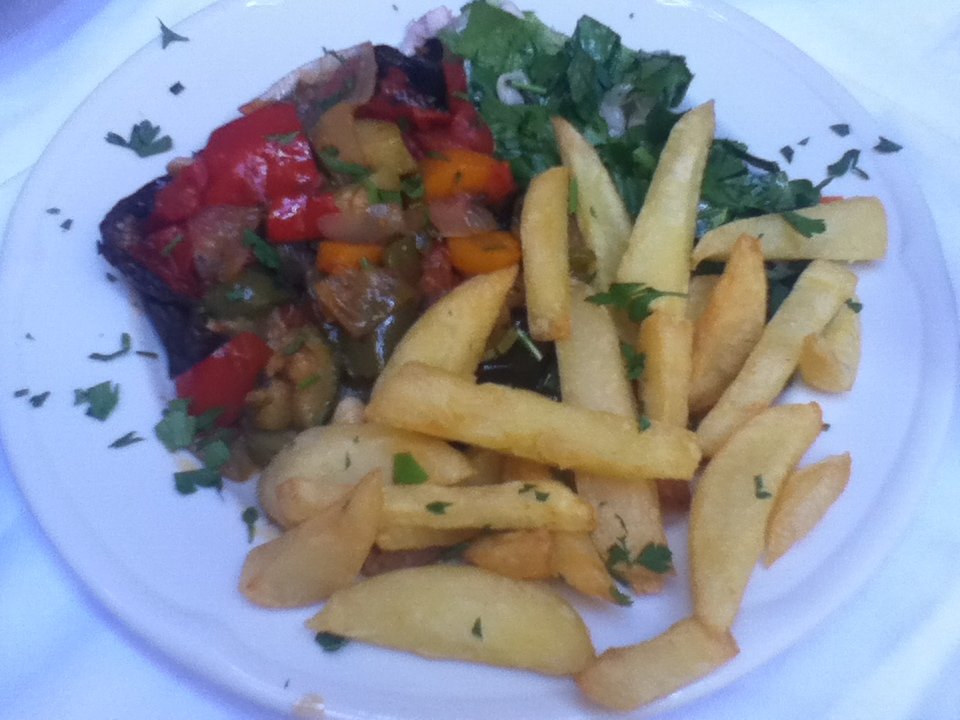 Of all the “stuffed” foods I tried in Greece (stuffed tomatoes, stuffed bell peppers, stuffed vine leaves, stuffed zucchini flowers, etc.) this was the first one to be stuffed with vegetables rather than just with herbs and rice. I do love all the other stuffed dishes too, but this one was the winner in terms of both nutrition and flavour. The combination of delicious food and romantic atmosphere makes To Steki hard to beat. Don’t miss it.

We managed to squeeze in a second visit to To Steki when we returned to Chania briefly to pick up our luggage after hiking through the Samaria Gorge (which was awesome! More on that in the next post). I couldn’t resist ordering these same two dishes again; I loved them that much. Oh, and then I also threw in some green beans in tomato sauce, just because I wanted to try something new. 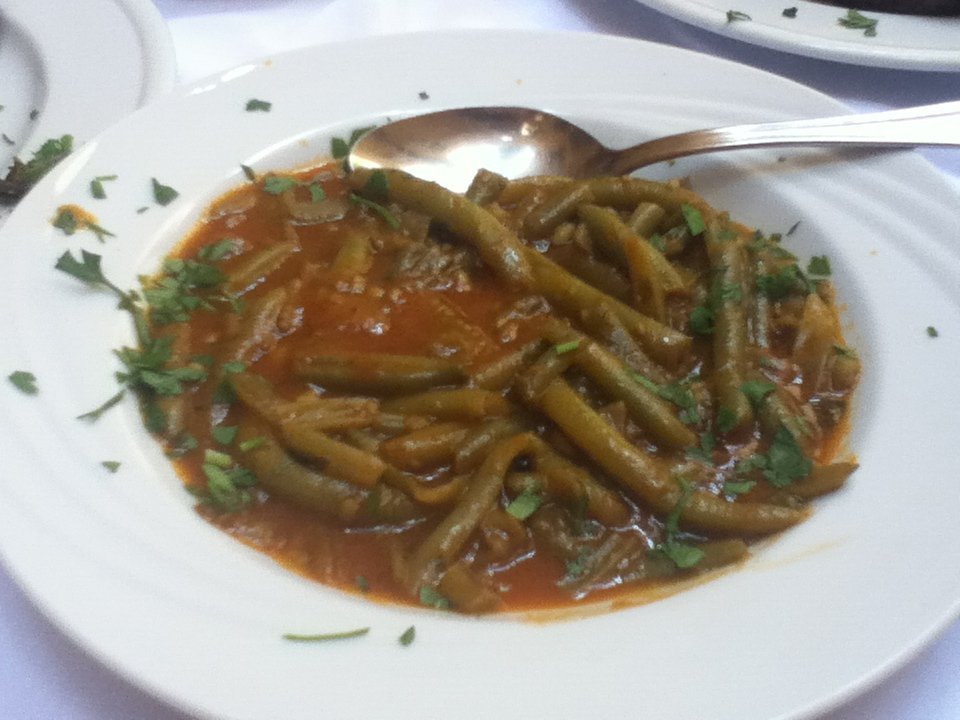 Yes, I ate way too much food. No, I’m not sorry. I can’t believe I was ever worried about not being able to find vegan food in Greece. The only thing I should have been worried about was whether or not I would be able to fit into my jeans when I got home. 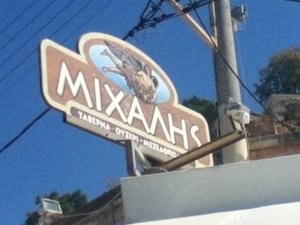 OK, I know I just told you not to eat at the waterfront restaurants facing the Chania harbour, but let me qualify that by saying that this really only applies to the ones smack dab in the centre of town. If you walk out towards the lighthouse you will come across some much more authentic dining establishments, such as Michalis, which offers a huge variety of mezedhes (appetizers). Any time you see a restaurant that describes itself as a mezedopoleio, this indicates that they specialize in mezedhes and thus are likely to have lots of vegan options. In the case of Michalis, it claims to be a taverna (simple Greek restaurant), ouzeri (a taverna that serves ouzo) and mezedopoleio (a taverna that serves mezedhes) all rolled into one. And by the way, if you don’t know the Greek alphabet, you might want to learn it before you go to Greece. While you’ll rarely be required to speak any Greek, the ability to read signs can be very helpful, not to mention a lot of fun. OK, so I’m a language geek. Maybe not everybody finds it to be as much fun as I do, but it’s really pretty easy with a bit of practice. And by “practice” I mean staring out the window of the bus and trying the read the store signs before they pass out of view.

The waitress at Michalis rather insistently recommended the stuffed zucchini flowers, but since I had just had those the day before I opted instead for two different kinds of kalitsouni (a small empanada-type pastry), one filled with onions and another with greens. 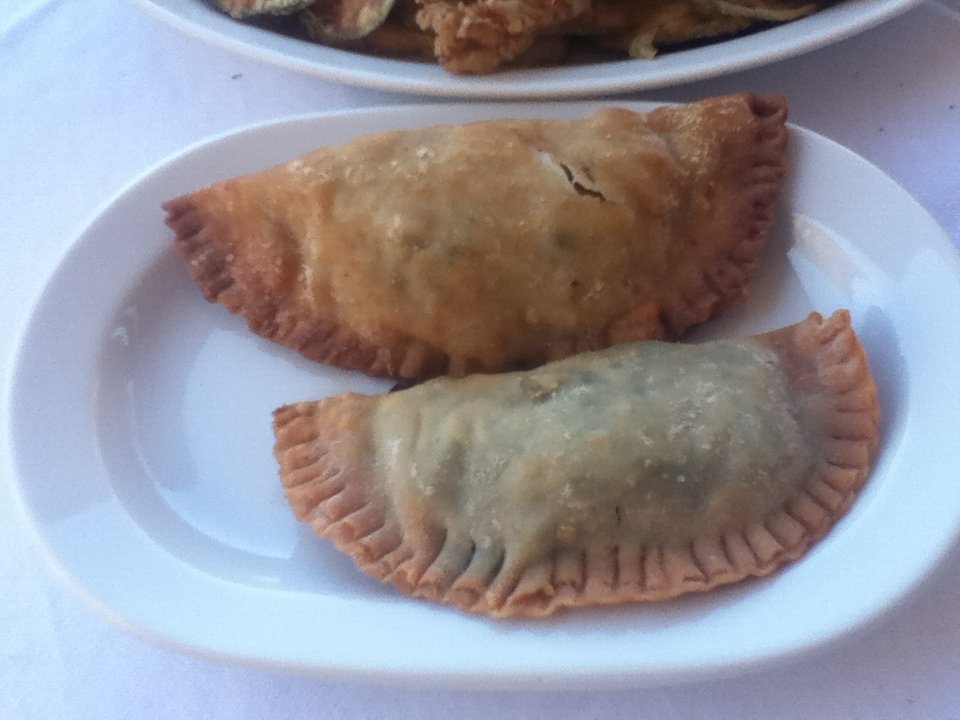 I also had what turned out to be a huge plate of fried vegetables, including peppers, eggplant, zucchini and mushrooms. Not the healthiest of meals by my usual standards, but certainly scrumptious. 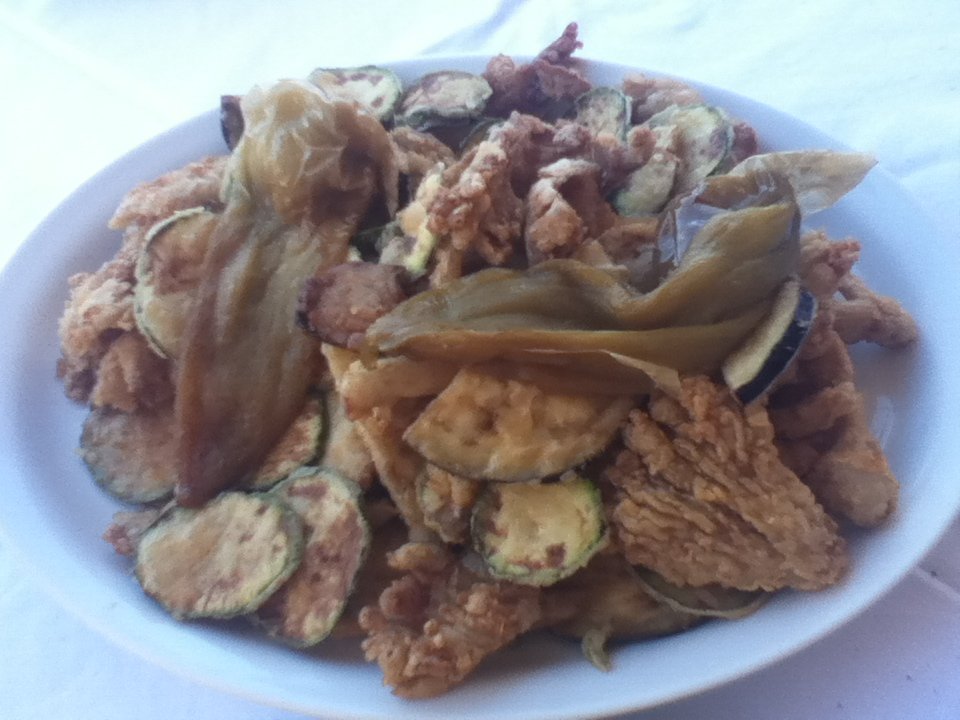 So that’s it for Chania – certainly one of the best food destinations we discovered in Greece. There’s still lots more to come though; we’re not even finished with Crete yet!