While Cáceres truly lives up to its name of “monumental city”, Trujillo has just has many impressive palaces, churches and towers, as well as an imposing castle standing guard above the city, yet somehow it retains a much more provincial, low-key feel to it. The views from the castle of the surrounding hills and countryside are a reminder that you’re really in the heart of rural Extremadura, even though the town is full of architectural masterpieces from the medieval and Renaissance periods. 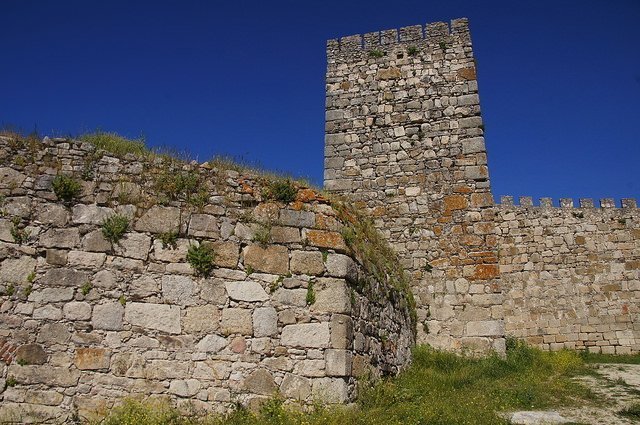 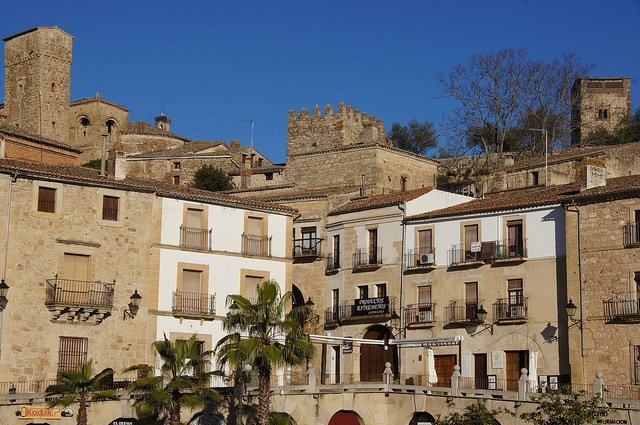 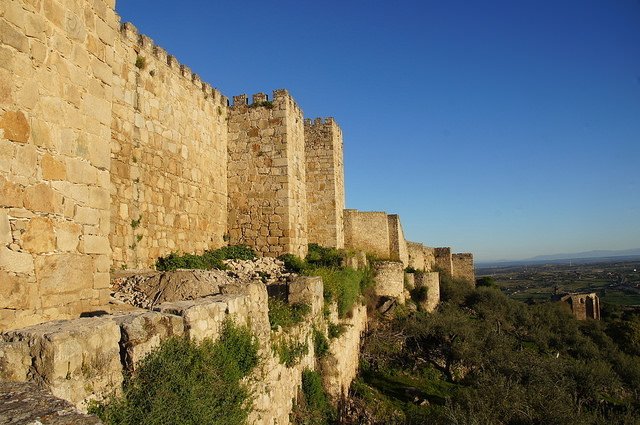 Nick had read in our guidebook about an Extremadura “institution” known as Restaurante La Troya and wanted to try it out. 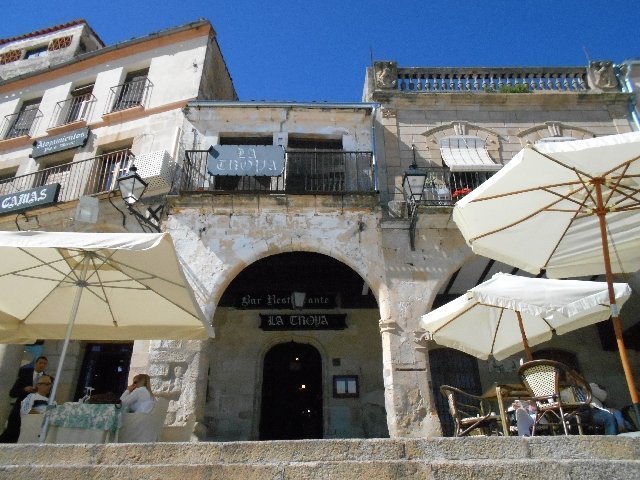 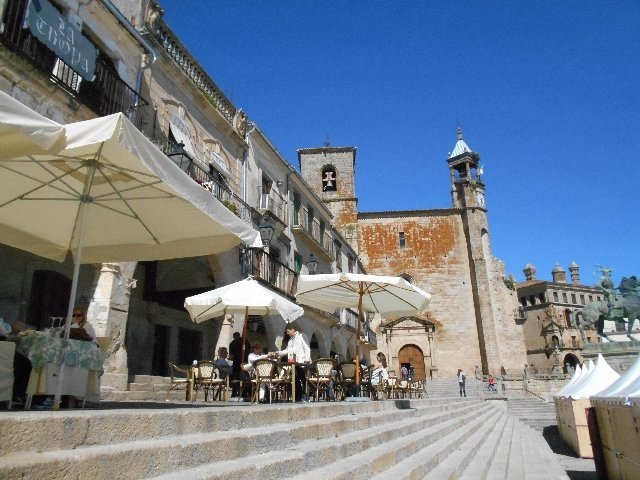 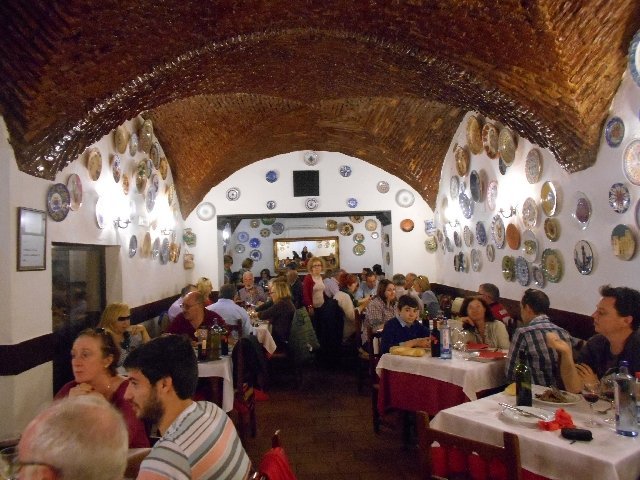 This place is certainly an experience, and for omnivores who are ready to scarf down a ridiculous amount of food it’s great value. Basically, your only option is to order the set daily menu for 15 euros, which includes a selection of first, second and third courses (all of which come in enormous portions), bread, water, a full bottle of wine, and a huge salad and tortilla de patatas (potato omelette) that will arrive at your table before you’ve even ordered. I was a bit taken aback by this sudden arrival and, explaining that there were lots of things I didn’t eat, asked the waitress what was in the salad (in Spain salads often contain ham or tuna). She listed off the ingredients, which were all vegan, and then asked me what it was I didn’t eat. I began by saying I was vegan, and to my surprise she understood what that meant and said that her boyfriend was also vegan. She then went to check with the kitchen to see what they could offer. As I expected, there were no vegan options for the second course, but this wasn’t a problem since I’d been munching on the Brotes Verdes croquetas on the bus and so really wasn’t very hungry anyway. I ended up with a bowl of gazpacho (cold tomato soup) and the aforementioned gigantic salad, which was more than enough for me. 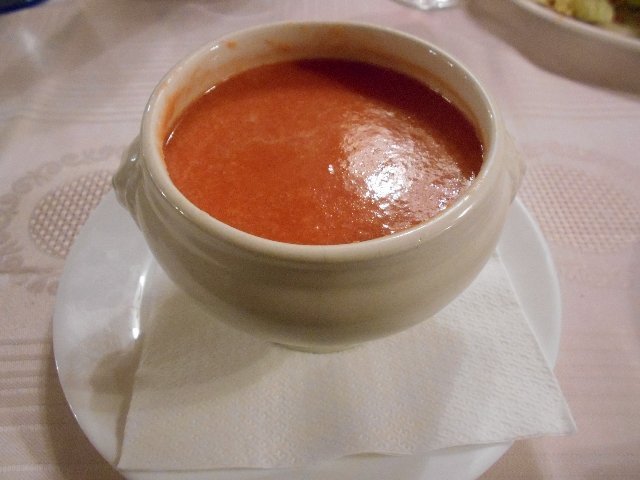 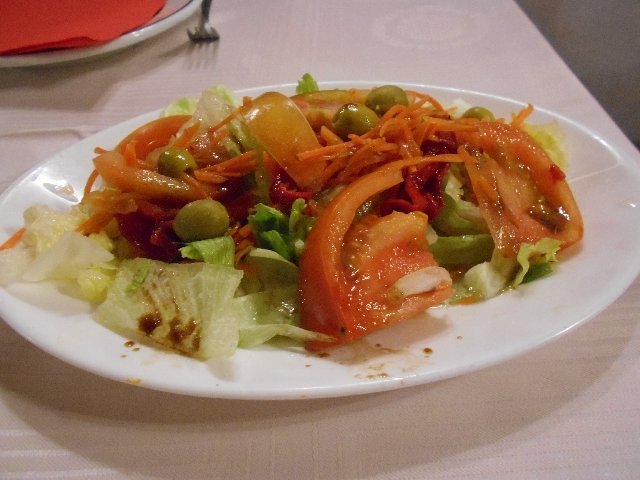 While one restaurant staff member initially tried to charge me the full price of 15 euros, which I thought was rather unfair, they later agreed to charge me only 8 euros – the price of a children’s menu – which was actually a pretty great deal. If you’re a vegan or vegetarian travelling alone or with other herbivores, then this probably wouldn’t be your first choice of restaurants. If you’re travelling with omnivores, however, and they don’t want to miss this unique dining experience, then rest assured that you can enjoy it right along with them (and, unlike most other patrons, you won’t waddle out after the meal with your stomach filled to its bursting point). 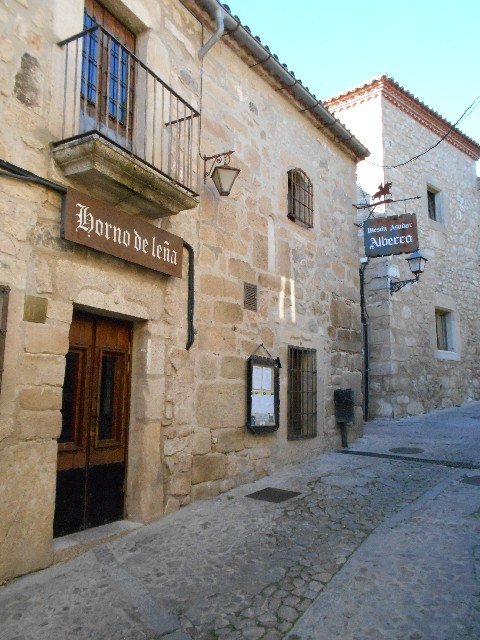 During our exploration of the town that afternoon, I stopped outside a few restaurants to peruse the menu. The one at Mesón Alberca caught my eye for two reasons: firstly, the list of first course dishes included five or six items that appeared to be vegan, and secondly, one of those dishes was an intriguing local specialty that I had never heard of before: gazpacho de espárragos (asparagus gazpacho). I have long been a fan of gazpacho, and I am also someone who eagerly awaits the arrival of asparagus in early spring, so the combination of asparagus and gazpacho sounded like something I just had to try.

But first, I should say something about the restaurant itself, which was an incredibly romantic setting for what turned out to be a delicious meal. We were escorted to a table out on the back patio, which was surrounded by ivy-covered walls and had a tremendous view of two sandstone church towers rising up above us into the night sky, where the famous extremeño storks glided by over our heads as they headed home to their nests on the roofs and towers of Trujillo’s many architectural wonders. 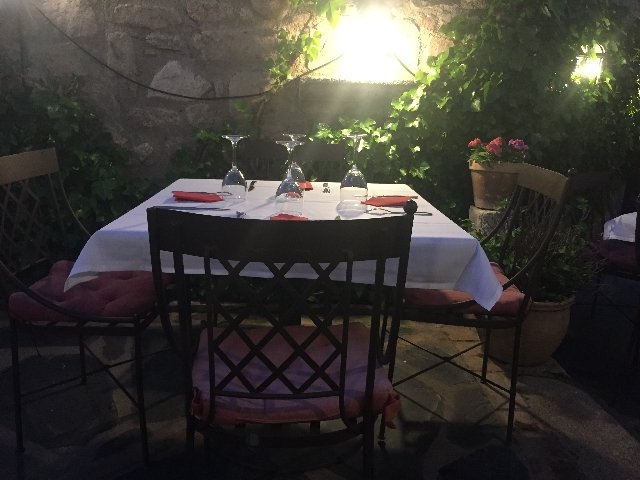 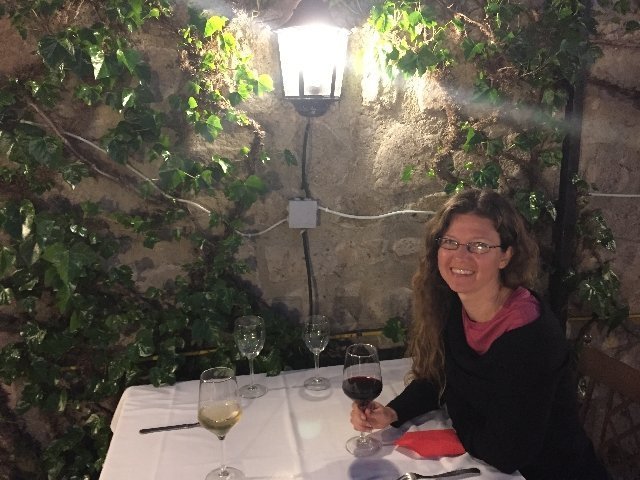 My first course was the asparagus gazpacho, which was just as scrumptious as I had imagined it would be. I’ve always thought of asparagus as the quintessential spring vegetable, so it seemed a perfect addition to a light, cool soup like gazpacho. 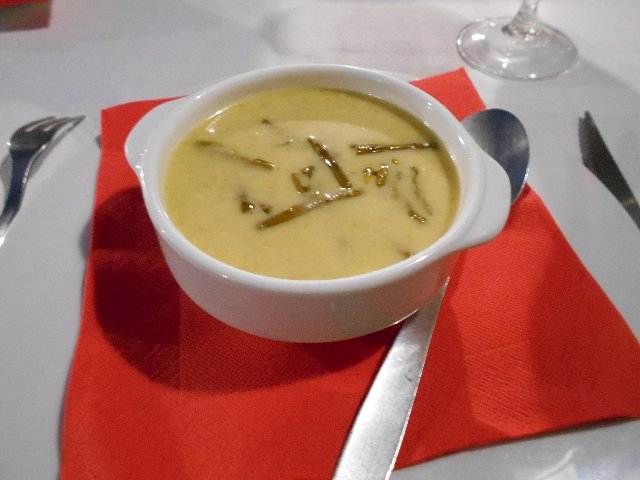 As a second course, I chose the verduras al carbón – a variation on the parrillada de verduras that is found in so many restaurants in Spain. This particular version included asparagus, two types of mushrooms and cardillo (a type of wild, leafy green). As common as it is, I had not yet had this ubiquitous dish on this trip, and I decided it was about time to rectify that. Well, I could not have chosen a better place to sample it. Now I love vegetables, I really do, but I honestly did not think that grilled vegetables could ever taste so good. I was completely blown away by how the smoky flavour from the grill really enhanced the individual flavours of each vegetable. 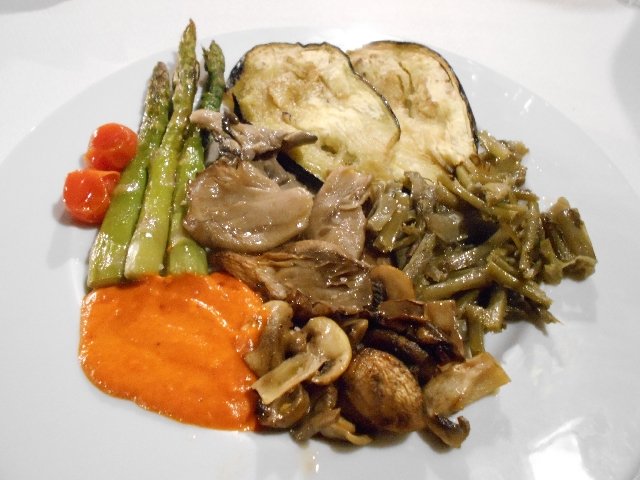 The one downside was that it came served with a red pepper sauce that turned out to contain cream. The server was very accommodating and offered to replace it with another sauce, but I chose to eat it anyway. My approach to such situations is generally this: if it’s already been served to me and I know that sending it back will mean that it gets thrown away, then I would rather eat it than waste it. At least, that’s my approach with dairy and eggs; as for meat, at this point I don’t think I could bring myself to swallow an animal’s flesh. I would probably give it to a fellow diner instead, or, failing that, to a beggar on the street.

So if you’re vegan then remember to ask for the verduras al carbón without the sauce, though I promise you won’t miss it. The vegetables are so delicious on their own that they really don’t need any extra flavouring. 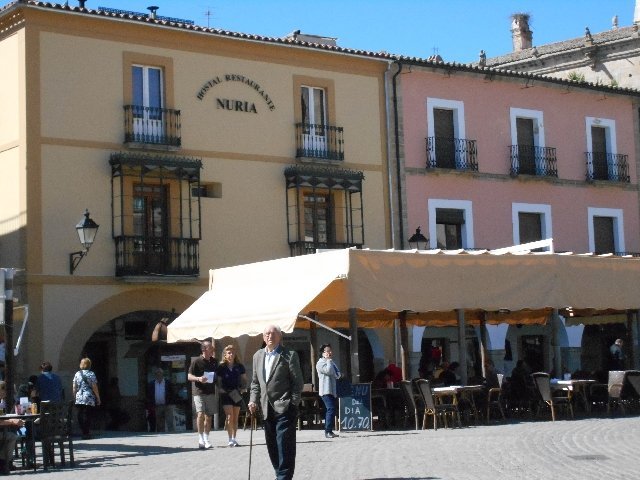 The next day for breakfast we headed to the Nuria Hotel and Restaurant – one of the many restaurants on the huge Plaza Mayor – for our favourite Spanish breakfast of tostadas with olive oil and puréed tomatoes. It was a great place to people watch and just soak up the atmosphere. 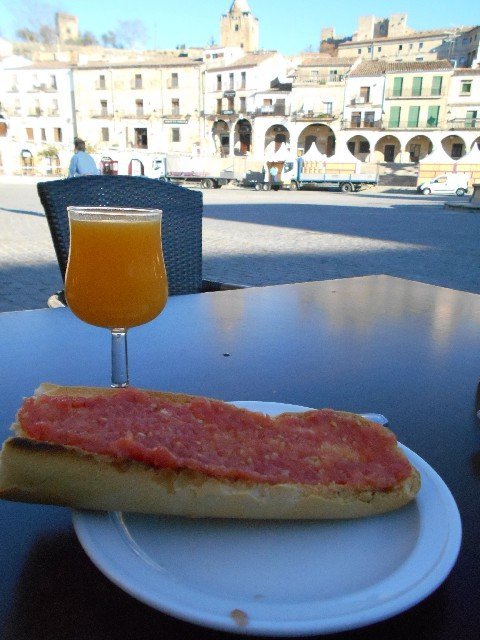 We returned to the plaza once again for lunch, this time settling on Restaurante El Medievo. For the second time in Trujillo, I was surprised to find a waiter who knew what the word “vegan”  meant. He was happy to adapt the standard three-course menu to suit my needs, so I ended up with a bowl of crema de verduras as a starter – a dish that was quickly becoming one of my favourites in my Spanish repertoire. 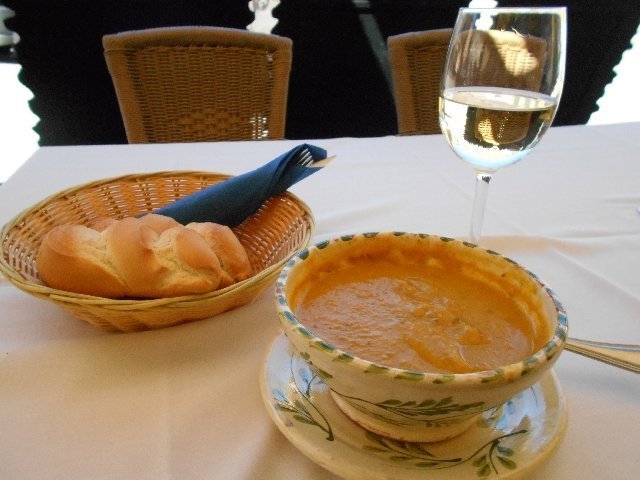 As my main course I had quite a large helping of patatas bravas. This is a quintessential Spanish dish, usually served as a tapa, that consists of fried potato wedges topped with a spicy tomato sauce. So yes, it’s basically glorified French fries and ketchup-with-a-kick, but I’m allowed to have French fries for lunch if I want to when I’m on vacation. 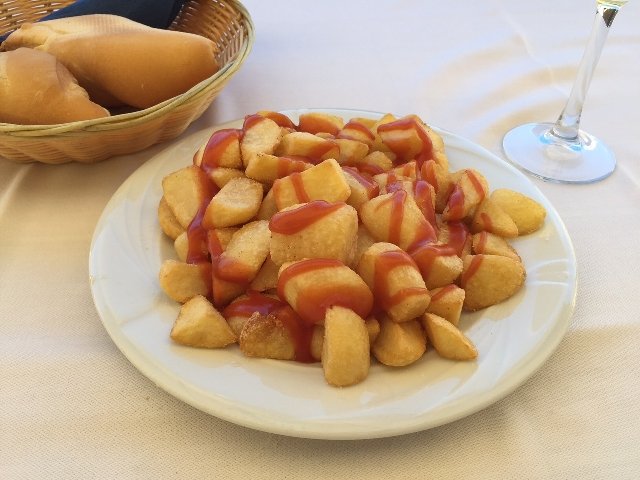 At least I balanced it out with a nice, healthy apple for dessert. 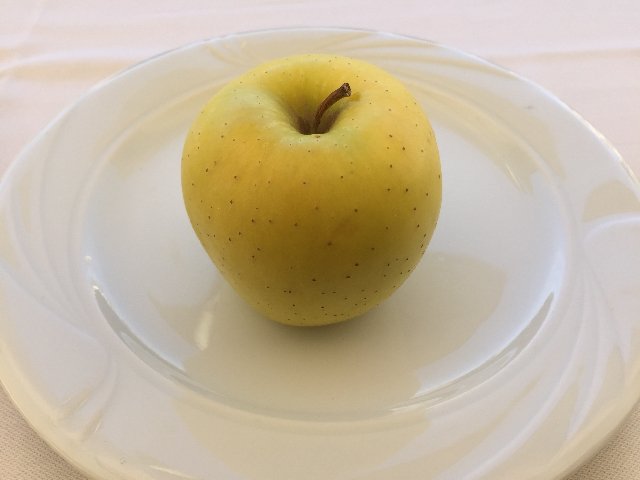 Apple (but you knew that already)

Fresh fruit is often available as a dessert option in Spanish restaurants, so be sure to ask for it even if it’s not listed on the menu and the server doesn’t mention it.

So that’s it for our stay in the lovely town of Trujillo. We were sorry to leave, but fortunately our next stop also had some amazing things to offer in the way of sights, accommodation, AND vegan dining. Check back for the next post to find out where!