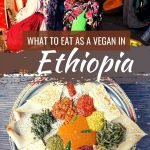 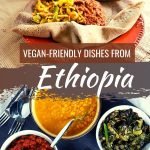 Ethiopian cuisine includes an abundance of vegan dishes. This unique aspect of Ethiopian food culture comes in part from the country’s religious history. It’s also a result of the abundance of legumes and vegetables available in Ethiopia.

Ethiopian food culture is heavily influenced by the Ethiopian Orthodox Church, which has been a dominant force in the country for many centuries. Ethiopia officially adopted Christianity back in the 4th century AD. Today, about 45 percent of Ethiopians adhere to Orthodoxy.

The Ethiopian Orthodox Church dictates a fasting schedule that prohibits eating animal products for 208 days of the year. This includes every Wednesday and Friday, and several weeks before major holidays such as Easter, Christmas and St. Mary’s Festival.

Similar fasting traditions are followed by Orthodox churches in other parts of the world, including Greece, Serbia, and Russia. In this case, “fasting” doesn’t mean that followers of Orthodoxy don’t eat anything at all during fasting periods. It just means that they abstain from certain foods, specifically animal products.

Though slightly less than half the population of Ethiopia practices strict Orthodoxy today, the influences from this religious history are still widespread and deeply ingrained in the country’s food culture.

Even in non-fasting seasons, the reality is that many people cannot afford to buy animal products. And so, they make most meals from vegan ingredients.

While you won’t find many Ethiopians who eat a strictly vegan diet on ethical grounds, you’ll certainly find a swath of vegan Ethiopian dishes that are very popular.

Stews, for example, are often built with a legume base (such as red lentils or split peas). They also feature the leafy or root vegetables that are local to the region.

Ethiopian food culture has also been influenced by the presence of Italian colonizers during the World War II era. While these influences haven’t changed the deep-rooted traditions of Ethiopian food, they have found spaces to coexist in ways that sometimes surprise travelers.

For example, there are many pizza shops, specialty coffee shops, and Italian gelato vendors in Ethiopia. And all of these feature delicious bites created specifically for vegan fasting days.

In Ethiopia, we traditionally serve meals as shareable platters with several different dishes, rather than as individual plates. When eating with a group, everyone typically eats from the same large platter.

These platters will include at least one stew, injera bread, and often some vegetable side dishes like stir-fries and salads.

Stews are the first part of any platter. The most popular Ethiopian stews often have a legume base and are flavored with one of two main spices — berbere or turmeric.

The basic steps for cooking Ethiopian stews are to sauté some onions, garlic and either the berbere spice or turmeric with oil, and then add your chosen legume. Finally, add some water and let it simmer. Here’s a closer look at three classic plant-based stews.

These same dishes are also eaten in neighboring Eritrea, though they go by different names there. Take a look at this guide to Eritrean cuisine, which is very similar to Ethiopian and just as vegan-friendly.

Misir wot, or red lentil stew, is made with an Ethiopian spice blend called berbere. Berbere is made by mixing hand-ground chili powder with a handful of other herbs and spices, depending on the preferences of each family and the availability of ingredients.

It takes quite a while to make your own berbere from scratch. Yet, it is used nearly every day in Ethiopian cooking, so many families make large batches once every year.

Atir kik, or yellow split pea stew, is made with turmeric. Due to their milder flavor, yellow turmeric sauces and stews are preferred by people who can’t tolerate spicy food.

Traditionally, this dish is cooked until the peas are very soft and mushy. But you can easily reduce the cooking time at home for a firmer texture if you prefer.

Nowadays, there are also places where you can buy “shiro powder”. This will be a dry mix of the chickpea flour with the flavoring spices already added.

Shiro wot is quick and easy to cook; you just add water, heat and stir until done. It has a smooth and creamy texture that’s addictive.

This dish is traditionally vegan. However, some places will add niter kibbeh, or spiced clarified butter, for extra flavoring, so be sure to ask.

Many vegetable side dishes are variations of stir fry. The most basic dishes will call for vegetables to be stir fried with oil, garlic and ginger. Here are a few traditional side dishes:

Atikilt wot is a healthy stir fry of shredded cabbage, potato and carrots. You could also add leafy vegetables if desired. This is a popular dish, especially for foreigners, because it’s not spicy on its own and does not require any special spices to make.

Tikil gomen is a curried variation with shredded cabbage and carrots. It is flavored mainly with turmeric and then simmered with onions, garlic and ginger.

Gomen is simply collard greens that are boiled, chopped and seasoned with garlic and seeded, diced jalapenos. It pairs well with the red berbere-based stews.

Salads are also a great addition to any platter. Often, salads are tossed with a vinegar dressing and mixed with red onions and jalapenos. Some examples are salata (romaine lettuce salad), azifa (green lentil salad), and timatim salata (diced tomatoes).

Last but not least is the injera. it’s perhaps the most important part of an Ethiopian meal! This fermented, sourdough flatbread is made from teff, an ancient superfood grain.

When made with teff, injera is gluten free, low in sugar, and is even a good source of protein. It’s easy to make too, although it does take a while.

The longest step is fermenting the flour mixture, but then it cooks right on the griddle into a spongy, pancake-like round that’s perfect for scooping up stews and veggies.

In fact, Ethiopians usually only eat with injera instead of utensils. Don’t be surprised if you are not given any cutlery when eating at an Ethiopian restaurant! Not only does the injera serve as the cutlery, it also serves as the plate.

A large, round piece of injera is used as the base of the platter. Then all the stews, stir-fry dishes and salads are placed on top of the injera. You’ll then tear off smaller pieces of injera to scoop up the dishes when eating.

Note that, while injera is gluten-free when made with teff, some restaurants outside Ethiopia (where teff is harder to find) will add wheat flour. If you follow a gluten-free diet, be sure to ask about this when ordering.

Many major cities throughout the world have Ethiopian restaurants. They are especially common in Italy, thanks to the colonial ties between the two countries.

You can be sure that, in any Ethiopian restaurant, you will always find vegan dishes on the menu. You will probably see these dishes referred to as “yetsome megebe,” which means “food eaten for fasting days.”

Almost all the vegetarian dishes are vegan, although some may have clarified butter in them (like shiro wot, mentioned above), so you want to always check that before ordering.

When you order vegan food at Ethiopian restaurants, the most common option is to get a large vegetarian combo or sampler platter, known as “yetsome beyaynetu”.

The combo usually comes on a base of injera bread, which is used to scoop the stew and veggies. This is then topped with salata (romaine salad), misir wot (red lentil stew), atir kik (yellow split pea stew), collards and so on.

If you want a smaller portion, you can often choose one protein from among the legume stews and a side of salad or cooked leafy vegetables.

When ordering to take away, the stews are usually plated on top of the injera. Some people love the injera soaked in the stew and some don’t. You can ask for the injera to be on the side if you prefer!

Usually, you won’t find appetizers or desserts at Ethiopian restaurants. This is because they are not a part of Ethiopian food culture. However, when a restaurant does have those offerings, your best bet for vegan appetizers will be sombossas.

These are similar to Indian samosas. They are dumplings of either spiced lentils or meat wrapped in flaky dough. And for dessert, you might find a Greek baklava, which can be made vegan by using maple syrup instead of honey.

To see more of Eleni’s authentic Ethiopian recipes, including many vegan Ethiopian food recipes, check out her blog and follow her on Instagram.

My name is Eleni, and I was born and raised in Ethiopia and have a passion for sharing Ethiopian cuisine. About 19 years ago, I moved to the United States. I live with my husband and two kids (ages 10 and 12) in the beautiful state of Oregon, near Portland. Everything I do is exclusively related to Ethiopian food, including my work as a caterer, food instructor and farmer’s market vendor. Are you interested in learning more about cooking Ethiopian food at home? Check out my blog for new vegan recipes, support and tips that will make it easy for you to bring authentic Ethiopian cuisine to your home.
View all posts by Eleni Woldeyes →