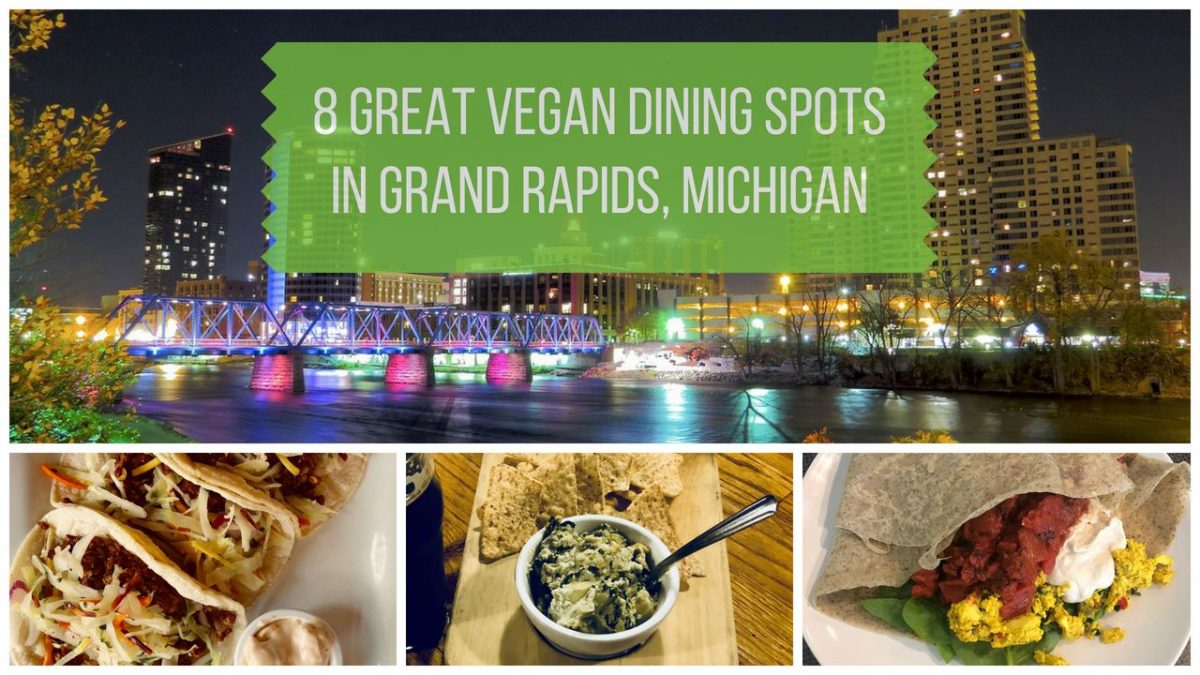 After eight glorious years of living in small-town-big-sky Montana, I recently decided to return to my hometown of Grand Rapids, Michigan.

As a bit of a foodie, the prospect of living in a city with more prolific dining options was pretty enthralling. Montana, though wildly breathtaking and tantalizing to my other four senses, often left my vegan taste buds feeling hopelessly neglected when it came to eating out.

What I did not anticipate, however, was how overwhelming it could be digging through this enormous pile of Grand Rapids restaurants with vegan options to find the true shimmering gems of vegan indulgence.

This led me on a delicious quest to compile a comprehensive list of restaurants in Grand Rapids MI that offer some of the most delicious vegan-friendly food in this artsy, diverse and “fun” (read: beer)-fueled city. Here are my final top 8 recommendations for delectable vegan dining in Grand Rapids.

What you’ll find there: Coffee, cocktails and a varied menu 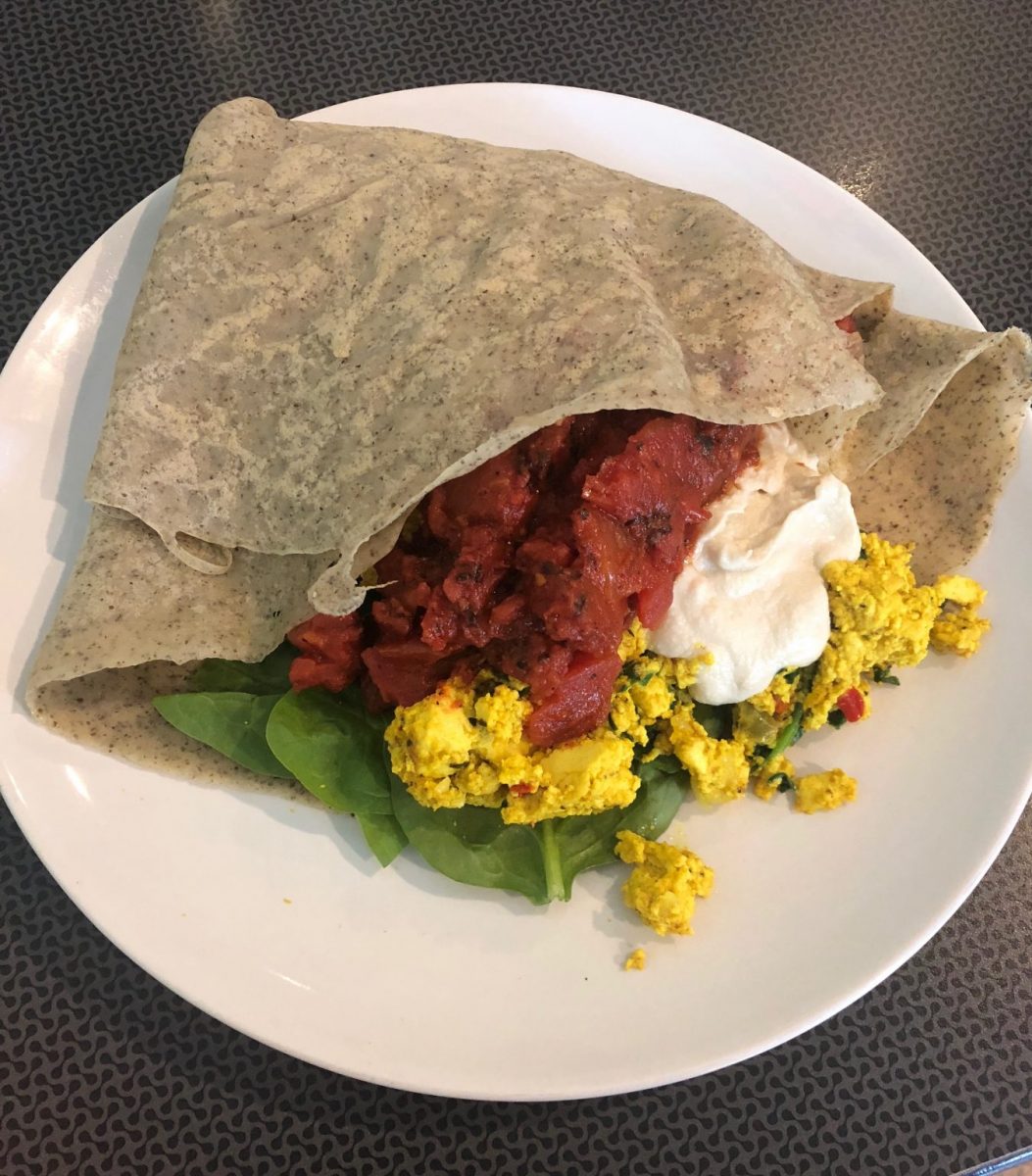 They use fresh, locally sourced ingredients, and, while their menu offers something tasty for everyone, it will win the heart of any vegan with the prominence of those adorable little “VG” icons next to items that are vegan or can be made vegan upon request.

Little Lucy’s also has a café offering coffee (any way you like it), tea and fresh baked goods plus a full bar (Bloody Mary and Mimosa bar on Saturdays and Sundays)!

The portions are generous, so bring an appetite; you will not be disappointed.

What you’ll find there: Burgers, tacos and deli food 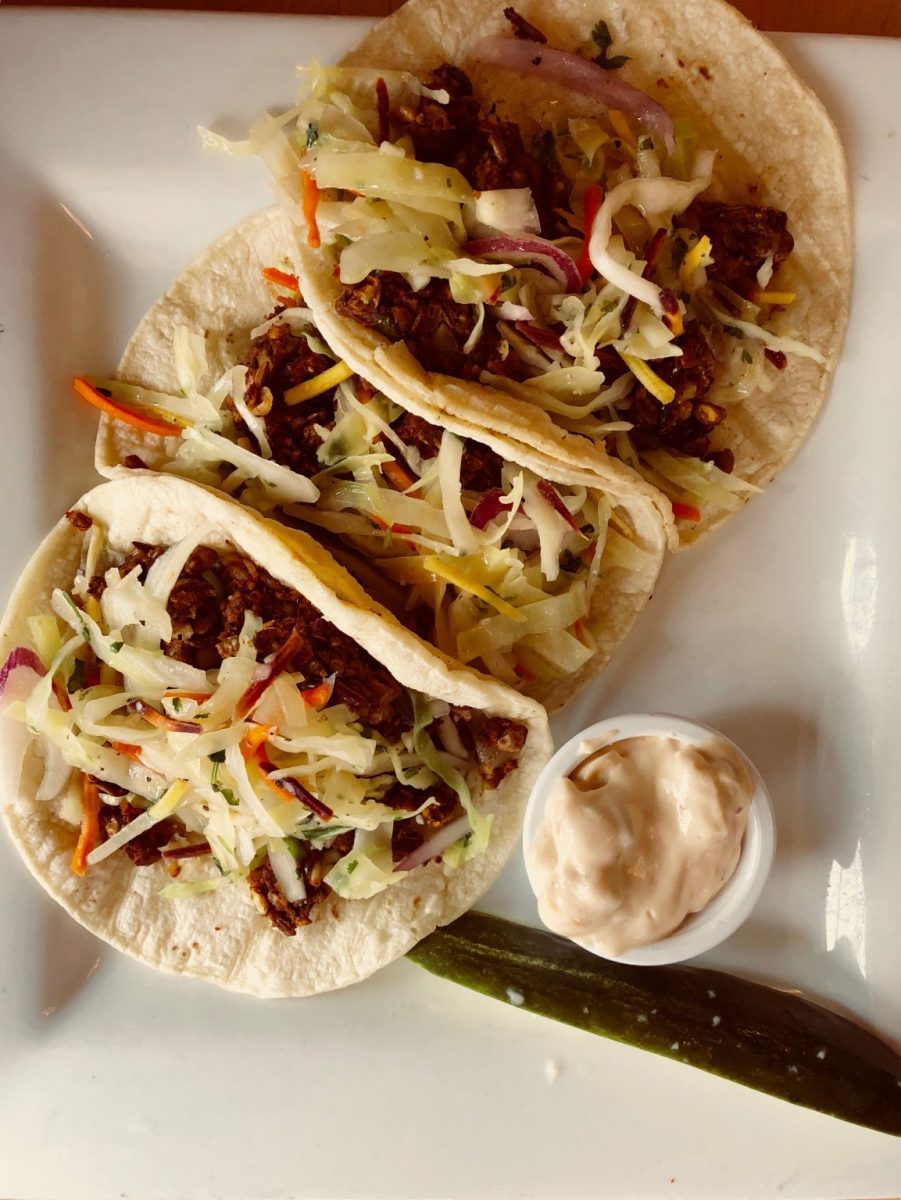 UPDATE December 2019: Marie Catrib's has permanently closed, unfortunately. However, a new "vegetable-forward" restaurant has taken over the same space. It's called Kingfisher Restaurant and Deli and offers plenty of vegan options.

Nestled on the corner of Lake Drive and Diamond Avenue in the beloved, eclectic Eastown neighborhood, this popular eatery/delicatessen could be described as “Grand Rapids’ sweetheart.”

When I leave, I don’t just feel full of delicious food; I feel like I just exited a loving, heartfelt hug. It’s that cozy. As an added bonus, they have loads of vegan options you can eat with your hands that are made with fresh, healthy ingredients and lots of love!

•       “We Got the Beet” — A hand-crafted patty made from beets and wild rice with green curry peanut sauce, kale and carrot slaw and garlic-lime veganaise nestled in a branny-oat bun

While you can generally expect a bit of a wait (usually not too bad), go there confidently armed with the knowledge that it will be worth every second.

What you’ll find there: Best brunch in Grand Rapids

Anna, it turns out, has accumulated lots of houses (six, to be exact) throughout Michigan over the years, and thankfully two of them are located in Grand Rapids; one on the East Beltline and one on Plainfield Avenue.

Akin to the aforementioned Marie’s and Lucy’s, Anna’s House is a vegan brunch staple, building their tasty menu with healthy, locally sourced and feel-good ingredients in mind. As an added bonus, their menu sports those handy icons we have all come to adore (only theirs are cute little green leaves) indicating vegan-friendliness.

•       Breakfast Tinga Tostadas — Made with jackfruit

If it’s lunch that you are craving, do not miss Anna’s Vegan Impossible Burger! Trust.

What you’ll find there: Pub grub, including vegan burgers, wings and Philly cheesesteak 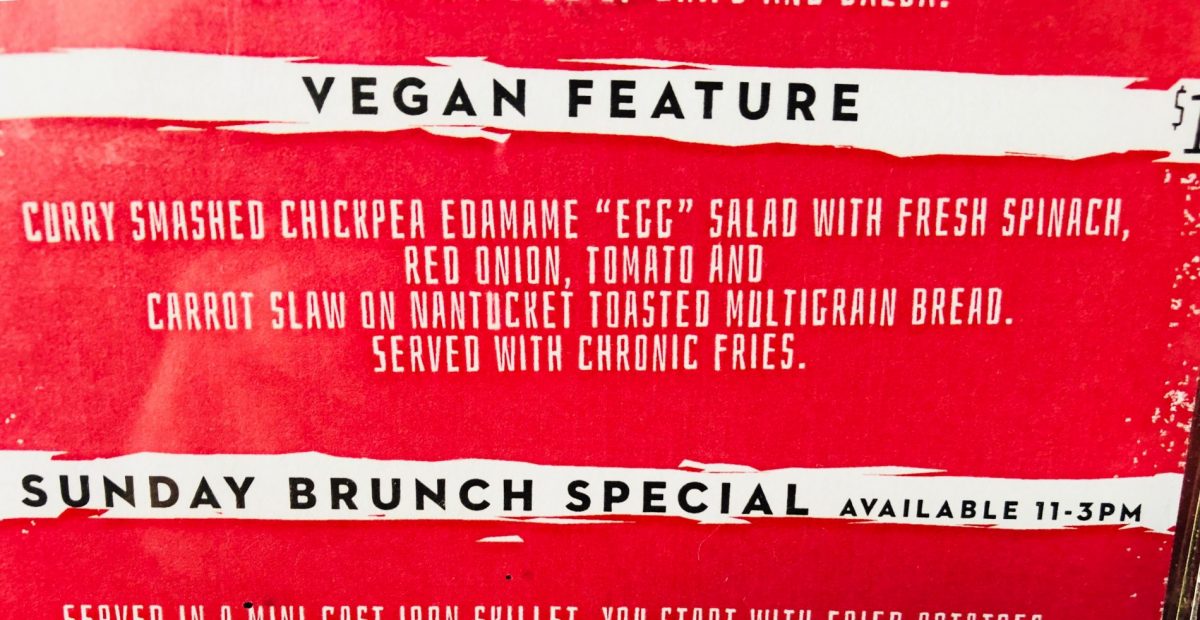 Look for the changing "vegan feature" at Stella's Lounge

Let’s be real. Just because we’re vegan doesn’t mean that we don’t crave pub grub, comfort food or fun. For that, Stella’s, located smack-dab in the middle of all the downtown action, is a godsend.

Just off of Fulton (pretty much the spine of Grand Rapids) on Commerce, Stella’s is a hot spot among Grand Rapids downtown restaurants, well-known for their busy bar scene and gigantic award-winning stuffed burgers.

Irrelevant as that may seem, it isn’t. One of those burgers happens to be vegan, but the delightful treats don’t end there. In addition to their seasonal “creature feature,” they also include a “vegan feature” (as pictured above), along with the favorites listed below.

…plus a full bar. Cheers!

What you’ll find there: International cuisine

It might seem like the first four places on this list were two-syllable names of females. That is because they were. It is a coincidence and just worked out that way. Anyway, meet Graydon. He is a boy.

North of Leonard Street on Plainfield Avenue, Graydon’s Crossing is a bar and restaurant that is also located in the Creston neighborhood and boasts a “global pub atmosphere.”

The flavors tend to be more complex and sophisticated than what you’d expect from a normal bar, as their menu items are inspired by flavors from all over the globe. They offer one or more delicious vegan options under each category.

…Plus, you can add additional ingredients such as jackfruit or seasoned tofu to any vegan dish! They also offer a full bar and 50% off select menu items on Meatless Mondays.

What you’ll find there: Brewery with vegan sandwiches, pizza and ice cream 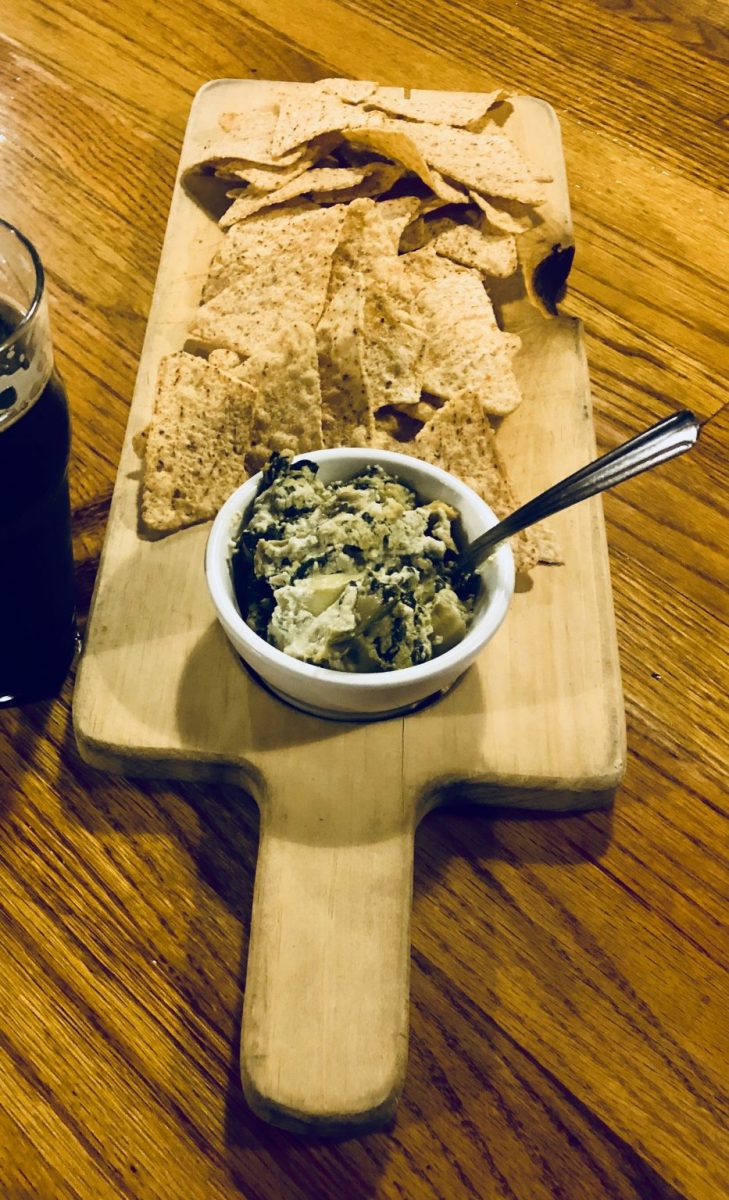 ​Grand Rapids was voted “Beer City USA” in national polls, and for good reason: there are about a billion breweries everywhere. That being said, I typically don’t expect to go to one and be bombarded with vegan options.

Pictured above is the vegan spinach and artichoke dip, and, if their vegan pizza [Link to pizza post] quality is any indication of their sandwiches, those are bomb too. Too bad I’m a sucker for pizza, so I’ll never know.

​Thai cuisine has an enormous variety of dishes for vegans. [Link to Thailand post]. Many restaurants in Thailand have huge menus, yet the food is anomalously delightful. That is because they pretty much stick to a variation of four things that they’re experts in: stir-fry with rice, stir-fry with noodles, curries and soups.

Bangkok Taste is a Thai restaurant in downtown Grand Rapids with a similarly large menu, and they know what they’re doing. While GR offers a vast array of ethnic foods with vegan offerings [Link to Veggie Planet], I have to bow down to Bangkok for their willingness to make just about any Thai dish vegan.

Seriously, with the icons; it’s like they opened up a bag of vegan confetti and it exploded all over their menu. It’s pretty much a dream your mouth never wants to wake up from. If you’re in the mood for some Thai food, it’s located on Jefferson Avenue just South of Fulton. I want to go there right now. 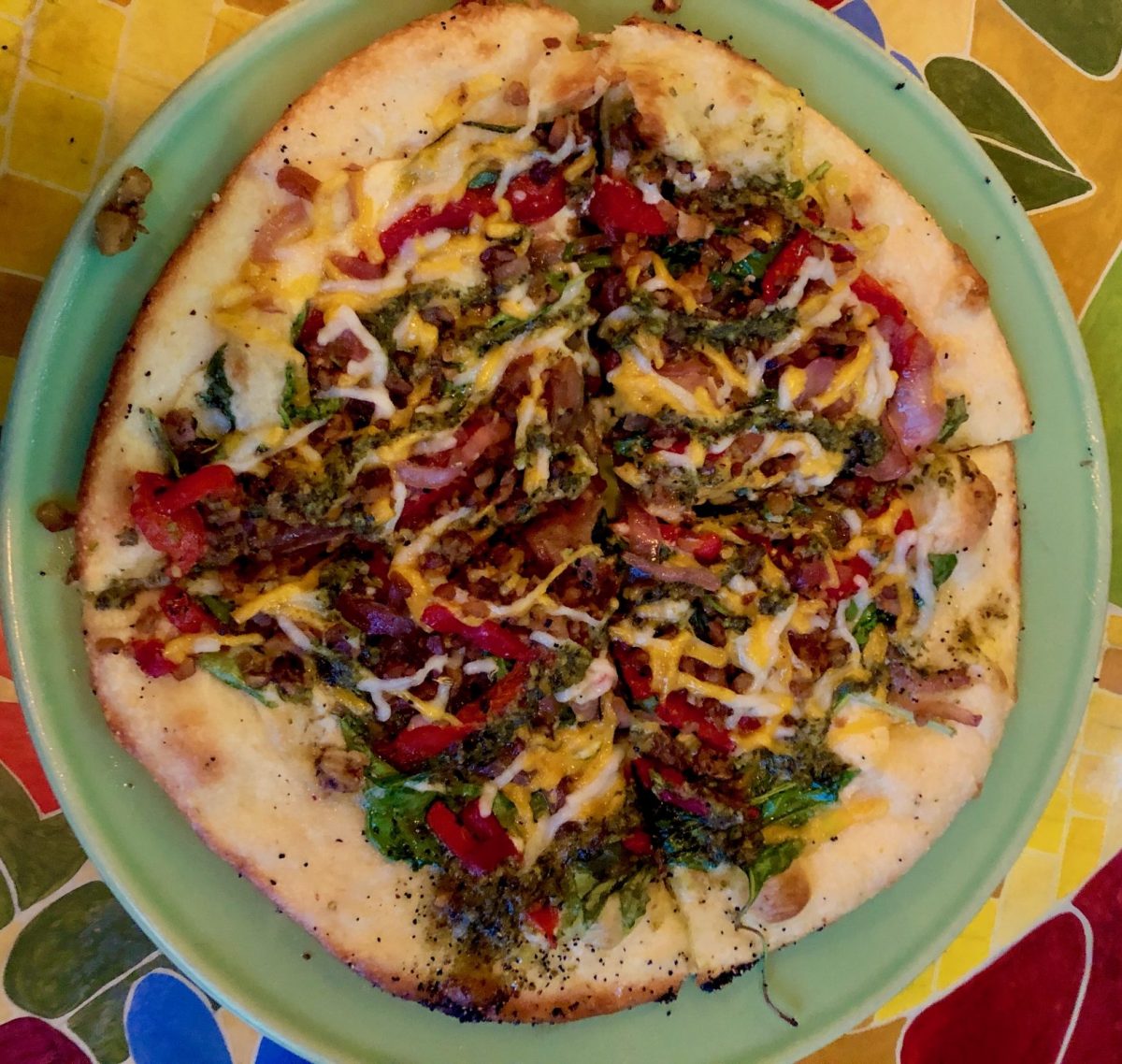 Brickroad Pizza resides on the brick part of Wealthy Street in Eastown and is probably my favorite of the Grand Rapids pizza joints for three reasons:

1.      They want to marry vegans — They have somewhere around 30 vegan options on their menu, so it’s pretty obvious.

3.      They are environmentally conscious/eco-friendly — Their to-go cups are made from corn.

​As is obvious from the name of the joint, they specialize in pizza. However, they also serve sandwiches, burgers, appetizers, pasta and soup, and SO many are vegan or can be if you ask nicely.

They are super accommodating and are always coming up with new vegan creations. They also have a full bar, and their ever-changing cocktail list usually indicates a special delicious vegan concoction.

Pictured above is the Tempest, which is my favorite thing. The sauce is vegan alfredo, and it’s topped with vegan cheddar, tempeh sausage, spinach, roasted red peppers and caramelized onions. They finish it with a drizzle of pesto. The crust is gluten free. Enjoy.

Those are my 8 favorites, and, should your travels ever lead you to Grand Rapids, I hope you find this list helpful and fulfilling. Feel free to invite me to any of these places while you’re in town, or if you know of some other awesome vegan restaurants I haven’t gotten to yet, you can invite me there too.

On the off chance that you are uncomfortable dining with weird strangers, please don’t hesitate to just share them in the comments. Bon Appetit. 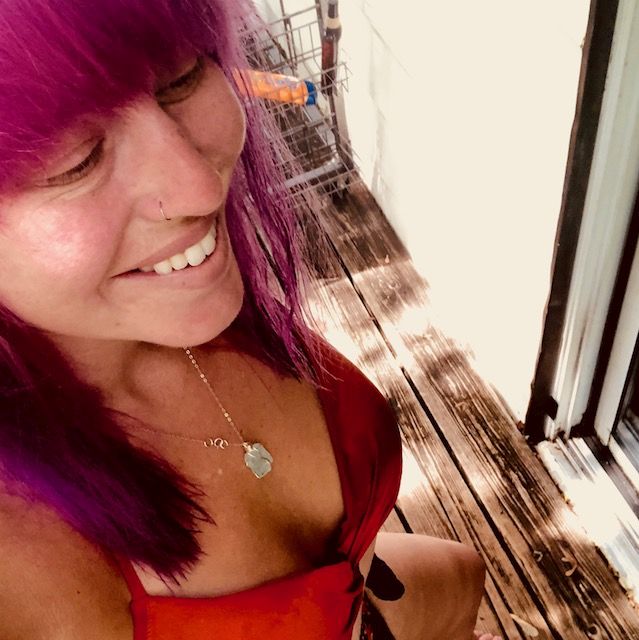 Hello, I’m Megan Anne Wright and I live in Grand Rapids, Michigan. I like traveling, writing, being snarky, gardening, laughing and pretty much anything to do with (vegan) food. I used to enjoy mothering until about five minutes ago when my son told me I can never be the real Queen of England. 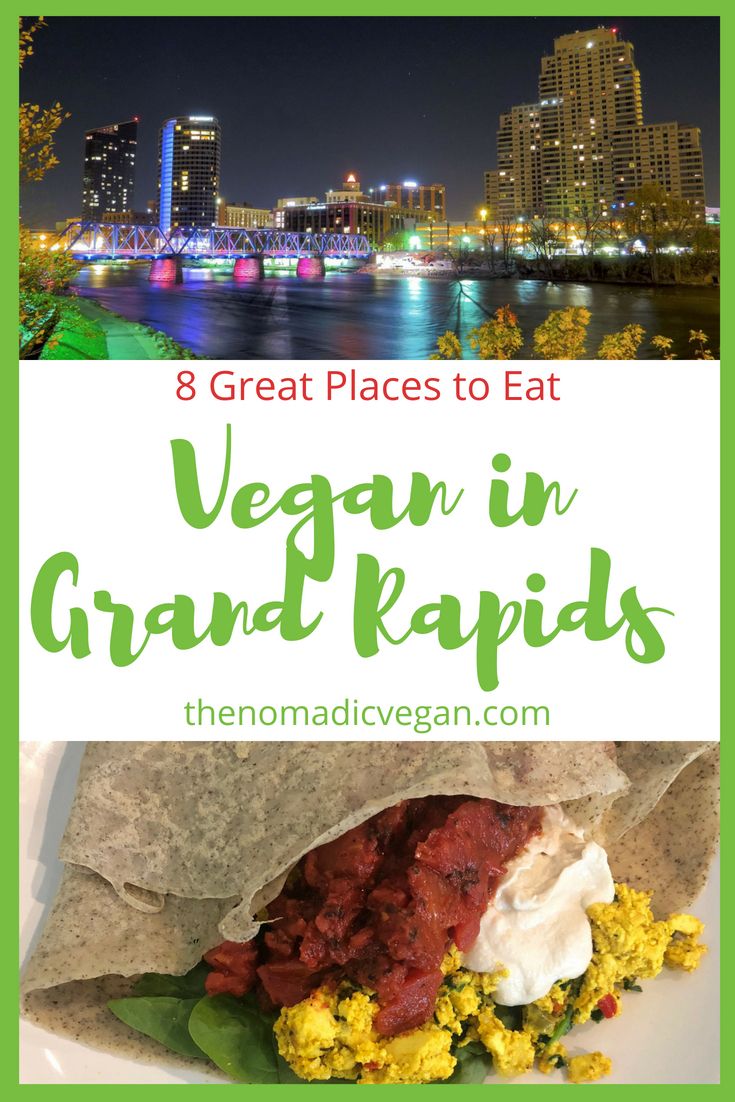