Vegan-Friendly Places to Eat in Cambridge 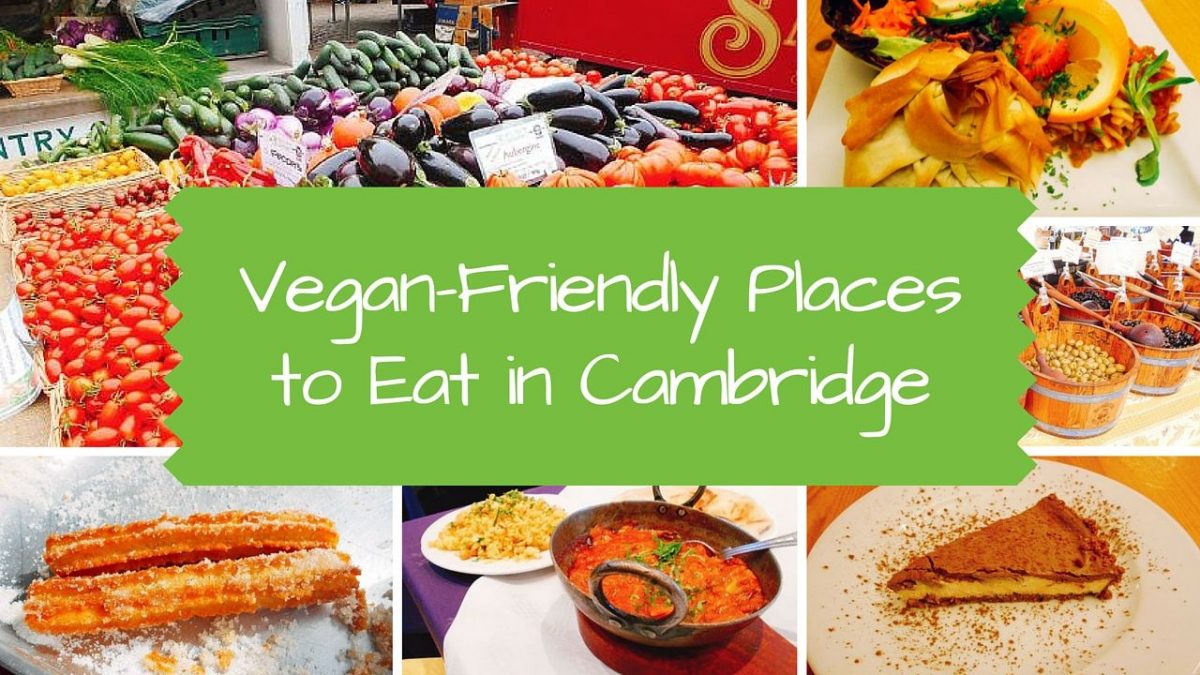 Last month, I took you on a romp through the streets of Oxford, England during its fun-filled May Morning celebrations. Well, I figure it's time for a little friendly competition. We all know that Oxford and Cambridge have a rivalry that dates back several centuries, right?

Well, let's see how they stack up where it really matters. No, I'm not talking about rugby or boat racing. The REAL question is ....

Which town has the most vegan-friendly places to eat, Cambridge or Oxford??

Let's start with a quick check on HappyCow – always my first port of call for trip research. According to HC, Cambridge has four vegan and vegetarian restaurants, while Oxford has three.

However, a closer look shows that, in Cambridge, there is actually only one real vegetarian restaurant, plus two falafal stands and a weekly vegan pop-up [UPDATE August 2018: it seems that pop-up is no longer happening]. Oxford, meanwhile, has two full-time vegetarian restaurants and one that opens just once a week.

So, nothing too conclusive there. Time to go out into the field for some hard-core research!

For the low-down on vegan food in Oxford, check out this post. And now, let's see what Cambridge has to say for itself, starting with its only full-time vegetarian restaurant.

UPDATE April 2020: Sadly, the Rainbow Café is permanently closed. But if you love rainbows and colorful places, check out these articles about the Rainbow Village in Taiwan and the Rainbow Mountains in China!

I'm just gonna say it: Rainbow Café is one of the best vegetarian restaurants I've ever had the pleasure of dining in. And with a super-convenient location directly across from the front gate of King's College, there's really no excuse for not walking down the narrow alley and underneath the rainbow to visit this lovely veggie haven. 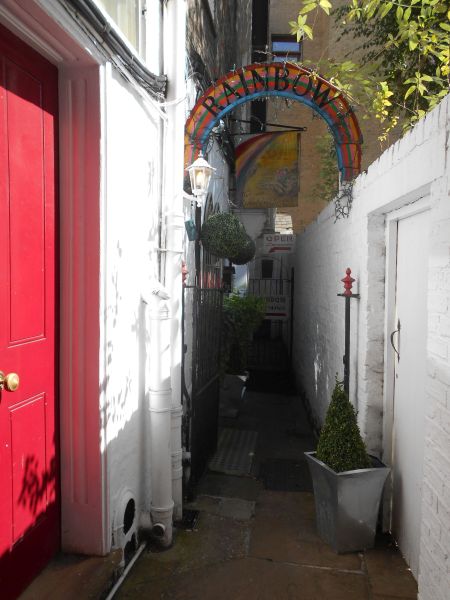 The tagline on their homepage is “globally-inspired vegetarian, vegan and gluten-free food”. Perfect for nomadic vegans with a love of world cuisines! There's even a world map on the front of the menu that gives the country or region of origin for each dish.

Vegan and gluten-free items are clearly marked, and there are plenty of both. There's even a separate symbol marking items that don't contain any nightshade ingredients, if that's a concern for you.

As my main dish I chose the vegan artichoke parcel. I'll be the first to admit that this was a pretty irrational decision. My primary reason for choosing this dish was my fondness for the word “parcel”.

It makes me think of distinguished old men travelling to Istanbul on the Orient Express and carrying brown paper packages tied up with string. But that's just because I've read too many of Paul Theroux's travel stories. Despite my irrational choice, the artichoke parcel was delicious. 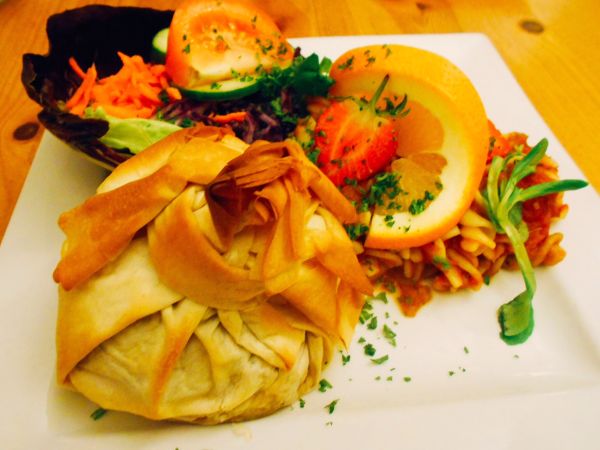 Served with pasta topped with marinara sauce and a crunchy side salad on a bed of red cabbage, it definitely would have been enough on its own to fill me up. I was starving, though, and unwilling to wait the 20 minutes it would take to prepare my parcel, so to tide myself over I also ordered a bowl of lentil and herb soup. 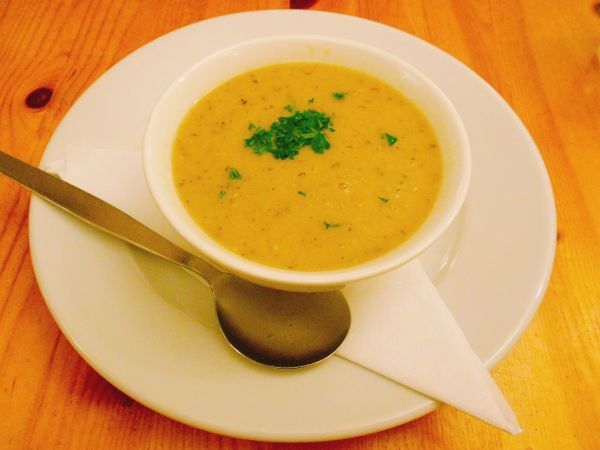 Now, the soup plus the parcel most definitely would have been enough to fill me up. But then I glanced up at the specials board and saw there was vegan chocolate mint cheesecake. So of course the whole 'I'm not ordering dessert this time' idea went straight out the window. 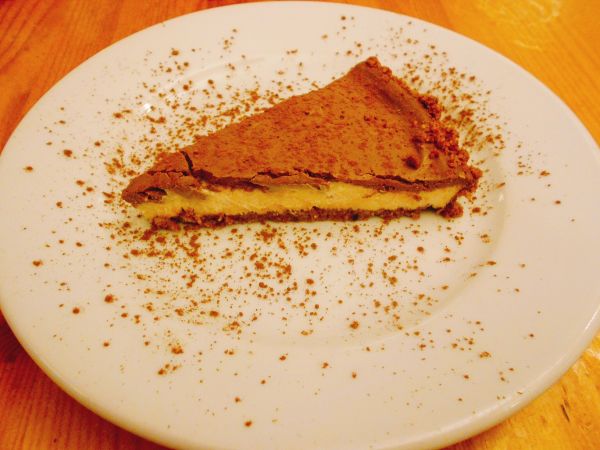 So, Cambridge's only full-time vegetarian restaurant is clearly a winner. Now, let's move on to those falafel stands. It turns out, they're both located in the same place! 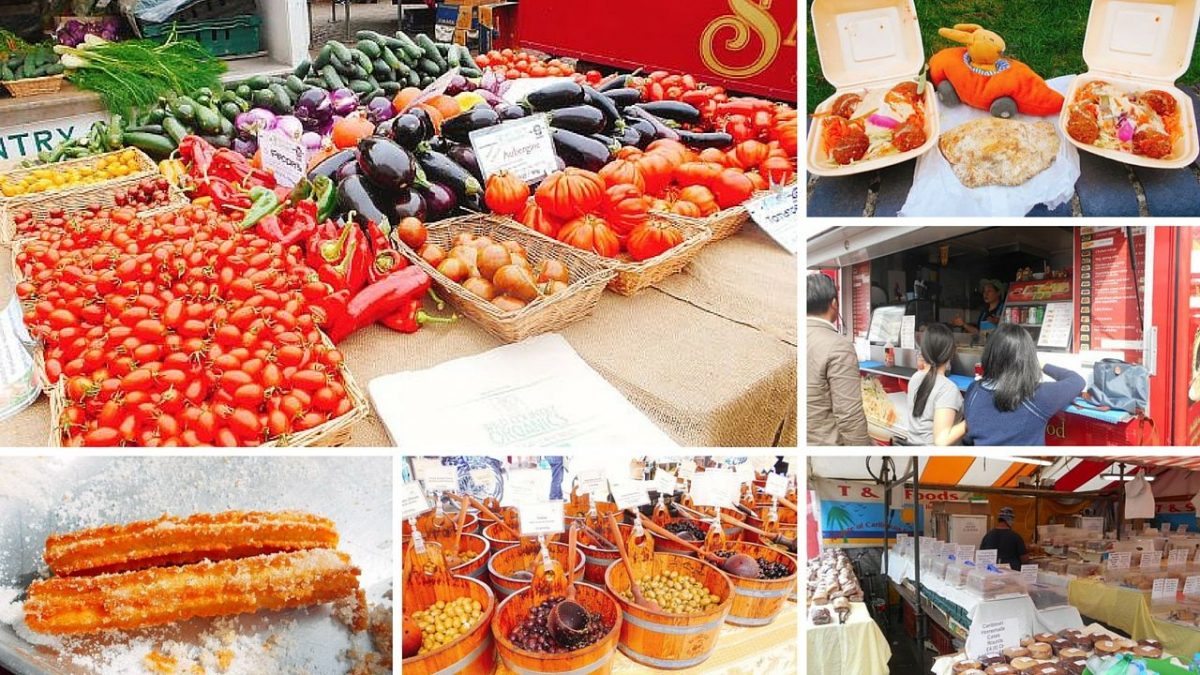 Market Hill sits right in the centre of Cambridge and has operated as a marketplace since the Saxon days of yore. Even now, outdoor market stalls set up here every single day. Not all vendors show up every day, though, so you never know exactly what you'll find.

And in fact, I didn't see the Taste of Cambridge falafel stand that got such rave reviews on HappyCow. I did, however, find the Mediterranean Falafel stand, along with lots more vegan options that were a complete surprise!

From smoothies to marinated olives to freshly baked breads, a quick wander through the stalls here will uncover all sorts of yummy treats. Here are some of the nibbles we stumbled upon:

Falafel. Authentic Middle Eastern falafel is served in the form of a wrap or in a box with hummus and mixed salad, as well as tahini and spicy sauce if you want it. Celiacs will be glad to know that the falafel is gluten-free.

Churros. The Cambridge Paella Company makes some delicious, naturally vegan churros. Although neither the chocolate nor the salted caramel sauces are vegan, there's a berry coulis that is. I'm told it pairs particularly well with the lemon-flavoured churros.

Thai noodles. The Noodle Bar offers a variety of take-away vegetarian dishes. The Ba Mii (fried yellow noodles with vegetables) was confirmed to be vegan, and I suspect that the other vegetarian dishes are also vegan or can be easily veganized. These include veg spring rolls, pad thai, vegetable green curry and vegetable sweet and sour.

Jamaican patties and sweets. A large stall called T&S Foods is run by a gregarious man who sells take-away Caribbean food. On my first visit I chose the Jamaican ginger, mango and pineapple pattie, which I have to say was pretty disappointing.

I expected it to be like an empanada with a filling inside, but it was more like a spicy bread, and to be honest I couldn't really taste the mango or pineapple flavours at all.

However, they also have a huge range of vegan sweets, including cakes, cookies, muffins and flapjacks (many of which are wheat-free). The second time around I gambled on a chocolate, orange and fruit cookie, which tasted much better than the pattie.

So, it looks like we are two for two! Both Rainbow Café and the daily market at Market Hill offer plenty of delicious vegan options.

Meanwhile, I've still got a few more vegan-friendly finds to tell you about. 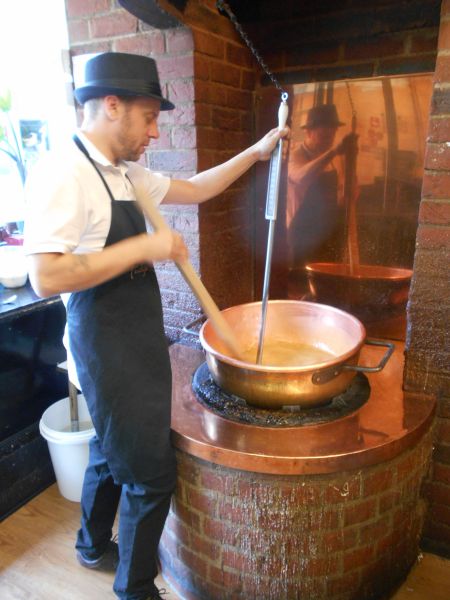 Time to make the fudge!

Fudge Kitchen makes artisan fudge in small batches, and you can even witness this fascinating process right in the store. It involves bubbling cauldrons and large slabs of marble, and walking through the front door feels a bit like stepping into Diagon Alley.

While Fudge Kitchen prides itself on continuing age-old traditions, they have made one adjustment to the original recipe: they now offer dairy-free fudge made with soy cream! The day I visited, the dairy-free flavour on offer was salted caramel fudge.

If you have a real sweet tooth, you'll appreciate this one. A little goes a long way! While it's sold in fairly large slabs of about 175 grams, it will keep for 10 days at room temperature and can also be frozen. 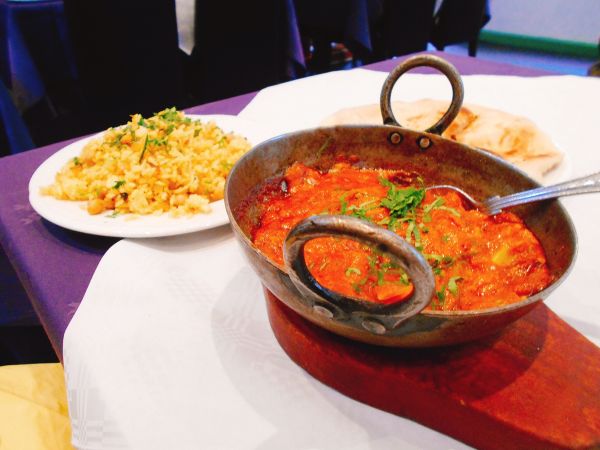 Ceylon curry. They like it spicy in Sri Lanka!

This is a pretty authentic Indian restaurant, where the extensive menu is divided according to the type of sauce or gravy used, and almost all of these can be served with vegetables instead of meat. While many of the dishes are normally made with ghee, the staff is happy to use oil instead, and so about 80 per cent of the menu can be made vegan!

And the naan bread here is vegan too, which is a rare find. I chose the vegetable Ceylon curry, which was quite spicy, as any Sri Lankan dish should be. There are plenty of milder options if chili peppers are not your thing. 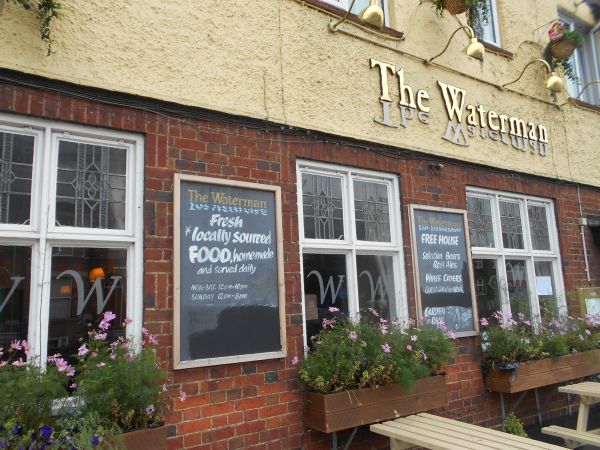 The Waterman is a great place to stay in Cambridge

We stayed at The Waterman – a traditional English pub that also houses a reasonably priced B&B upstairs. The only meal we ate there was the continental breakfast included in the room price, which came with several types of cold cereal, soy milk, white and whole wheat toast, jam and fresh fruit.

But if you want a heartier meal to start the day, they also a do a vegetarian breakfast with veggie sausage, tomato, mushroom, baked beans and sautéed potatoes. Just ask them to leave out the eggs. Beans on toast is another, lighter option.

The lunch and dinner menu also includes a variety of clearly-marked vegetarian options borrowed from different world cuisines, several of which looked like they would be vegan or easily veganized, such as vegetarian Chinese dumplings, ciabatta with sun-dried tomatoes, olives and red peppers, and veggie chili with rice.

So, who comes out on top, Oxford or Cambridge? Cambridge most definitely wins my vote. There were so many unexpected vegan discoveries to be made there, especially at the market. And if we're comparing vegetarian restaurants, I thought the food at Cambridge's Rainbow Café was much better than at Oxford's Gardener's Arms.

Granted, I didn't get a chance to check out Oxford's other vegetarian restaurant, The Magic Café. It's location out in East Oxford was pretty inconvenient, and judging by the very mediocre reviews on HappyCow it didn't seem like it would be worth the trek.

Overall, Cambridge just seems to send out lots more vegan-friendly vibes than Oxford. That being said, you'll have no problem finding a delicious vegan meal in either town.