Cruising the Okavango Delta with a Vegan Guide 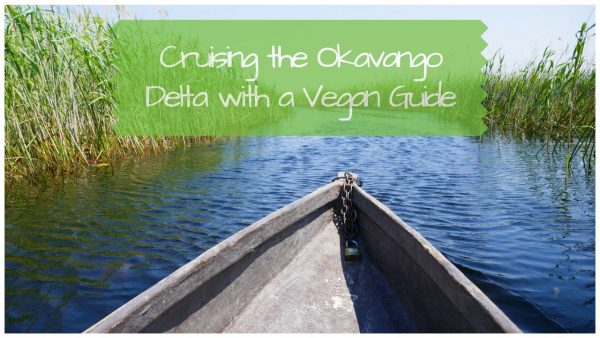 If you are a true animal lover, Botswana is arguably the best country in all of Africa to experience the continent’s incredible wildlife.

Why? For starters, hunting is completely banned in the country. I don’t think I need to explain why the hunting ban is a good thing for the animals.

As an added bonus, it’s also good for people who want to see the animals. In my experience, wild animals in Botswana are not scared of humans like they are in neighboring countries such as South Africa, Namibia, Zambia and Zimbabwe, all of which allow hunting.

This means you have a better chance of getting up close to them without them running away.

There are a number of options when it comes to exploring Botswana, from budget backpacker tours to luxury camping safaris. And you can even explore Botswana’s lush landscapes and majestic wildlife in the company of a local vegan guide!

This is quite a rarity, because veganism is not yet well known in most African countries, so local vegans are few and far between.

But in the Okavango Delta I had the great privilege of meeting a local animal lover who followed his heart at a young age and has been vegan for more than 20 years.

He now devotes his life to creating magical experiences for overseas visitors and educating them about the Okavango Delta's animals and environment as the region's only vegan guide.

I’ve been lucky enough to go on safari in several African countries, and my safari in Botswana was my favorite out of all of them. Being guided by someone who has a deep love and respect for the animals made it an unforgettable experience.

What is the Okavango Delta?

The landscapes in Botswana are unique. While much of the country is savanna covered in grasses and shrubs, the Okavango Delta is an intricate maze of winding water channels, swaying reeds, and miniature islands.

And this watery panorama is populated with wildlife of all shapes and sizes, from tiny white frogs to giant lumbering elephants! 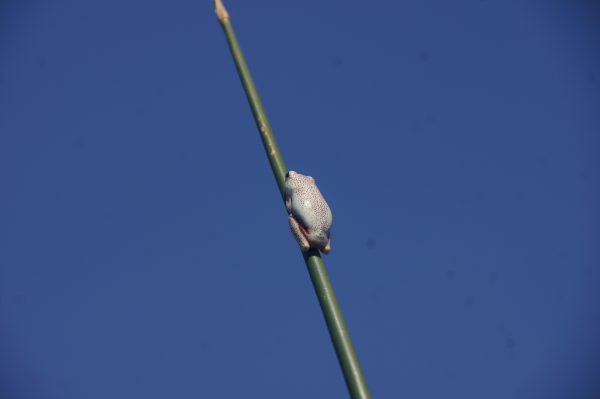 These tiny white frogs hang out in the reeds. 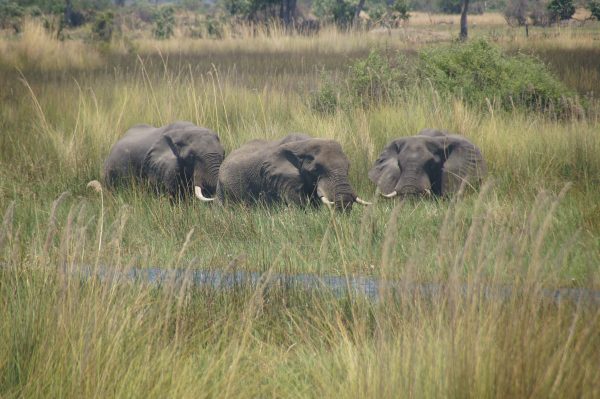 And so do these great big elephants!

The best way to experience the Okavango Delta is on a “mokoro” trip. A mokoro is the traditional canoe used by the locals as their main form of transport. Originally, these were dugout canoes made from the trunk of a local tree known as the sausage tree (check out this photo and you’ll understand why it’s called that).

The “polers”, who operate these canoes by propelling them forward with long poles, have recently switched to fiberglass instead of wooden canoes. This is much more sustainable, as the fiberglass boats last longer, and the trees don’t have to be cut down. 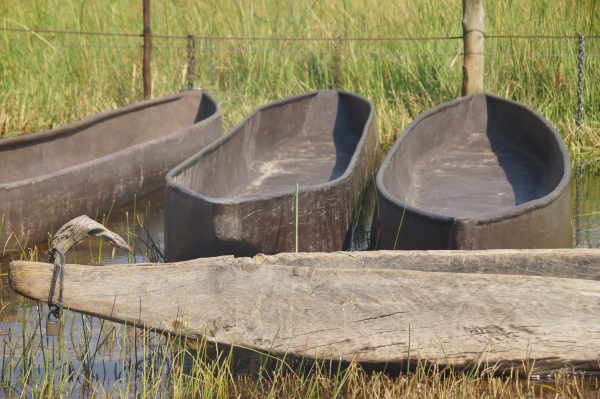 The mokoro in the foreground is made from a sausage tree, while the three behind it are fiberglass.

I recommend booking your mokoro trip through the Old Bridge Backpackers. This long-standing campsite and accommodation facility in Maun is set in a forest on the bank of a river, right next to the old, rickety bridge after which it’s named. 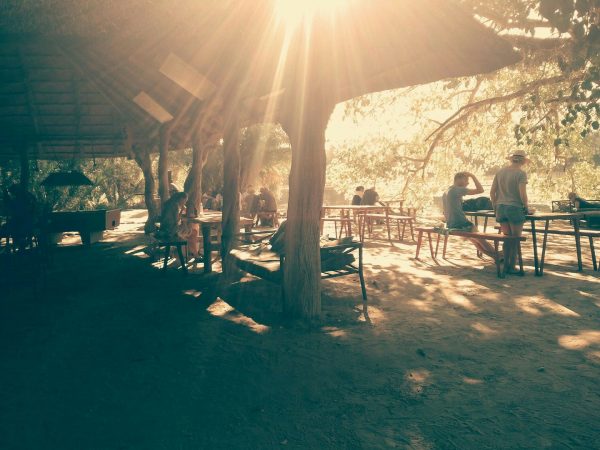 The Old Bridge Backpackers is a great place to relax and plan your next move.

Helene, who co-owns the Backpackers with her husband Dave, became vegan in 2015 and has since added a number of marked vegan options to the restaurant menu. These include wraps, curries, burgers, and even some delicious vegan desserts.

After two months of traveling in Africa, I finally came across a restaurant that actually labels its vegan options! And they even have vegan desserts! Old Bridge Backpackers in Maun, Botswana is a very vegan-friendly place with a wonderfully chilled vibe. One of the owners is vegan, so it's no wonder there are so many green Vs on the menu. Don't leave without trying their lime and coconut tart. . . . . . #nomadicvegan #vegantravel #veganbotswana #veganafrica #vegrockstar #africa #africantravel #travelinafrica #oldbridgebackpackers #botswana #okavangodelta #maun #vegan #vegansofig #vegansofinstagram #vegandessert #pie #lime #coconut #veganfoodshare #veganfoodporn #veganfoodlovers #green #neverstopexploring #globetrotter #foodietravel #eatplantsnotanimals #veganfortheanimals #veganforlife

Best of all, Helene and Dave can arrange for your trip to be led by Mogale – the Okavango Delta’s very own vegan guide! 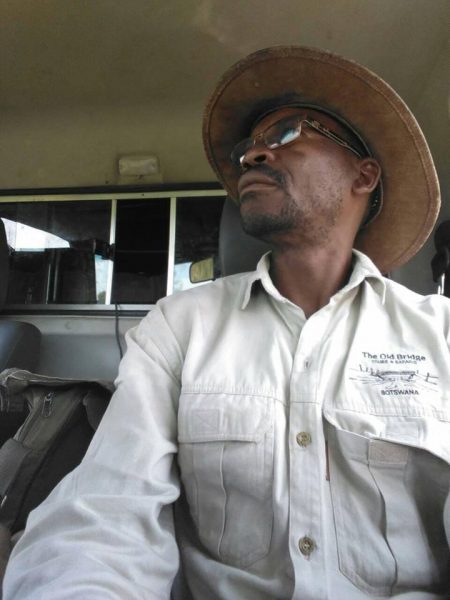 Mogale, born and raised in the Delta, has been vegan for more than 20 years!

Mogale is the most inspiring person I met on my three-month trip through southern Africa. He grew up in a typical African village in the Delta, where raising animals for food was part of everyday life. And yet, even as a young child, Mogale refused to be a part of this.

At the age of 10, when he found out that his grandmother was planning to kill one of her goats for meat, he became a vegetarian on the spot. He later became vegan in his teenage years and went on to study nutrition at university in Cape Town.

After earning his degree, he returned to his homeland and became a guide – the only vegan guide in the Okavango Delta. 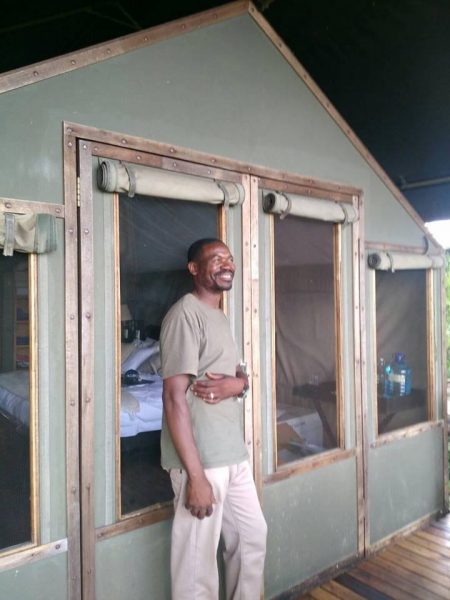 Mogale relaxing in one of the Old Bridge safari tents

Canoeing, Camping and Walking with Wildlife

One of the great pleasures of a mokoro trip is gliding serenely through the narrow, winding channels of the Delta, keeping an eye out for any wild animals who might be hiding in the reeds. 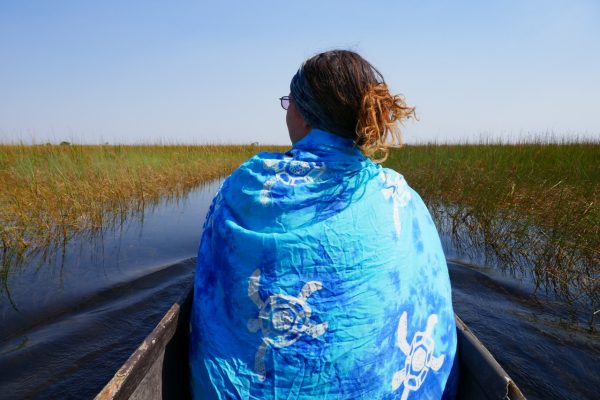 Cruising through the Delta in a mokoro

Nick and I chose a two-day, one-night mokoro trip, overnighting at a makeshift camp on one of the Delta’s many islands. Three elephants were there to greet us as we arrived, and they stayed next to our camp for the duration of our stay! 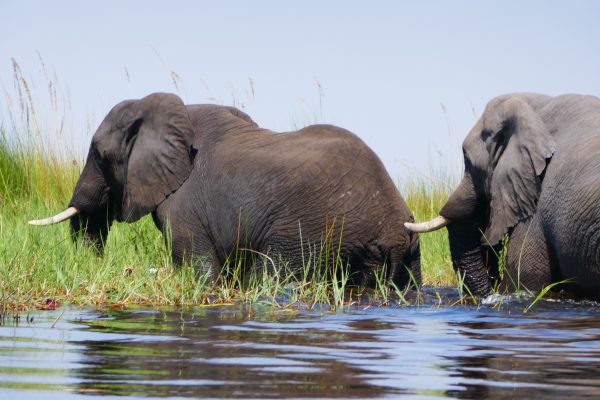 Our mokoro passed right by these elephants!

Lunch at the camp was a light and colorful affair, with plenty of local fruits, vegetables and legumes. We had the pleasure of being joined by Helene on our trip—the vegan co-owner of the Old Bridge Backpackers.

She’s planning to add more veggie meals to the standard mokoro trip menu and was eager to try out some new plant-based recipes with our camp chef!

Old Bridge Backpackers also offers self-catered mokoro trips that are a bit cheaper. If you go that route, here are some ideas for vegan meals you can make on a camp stove. 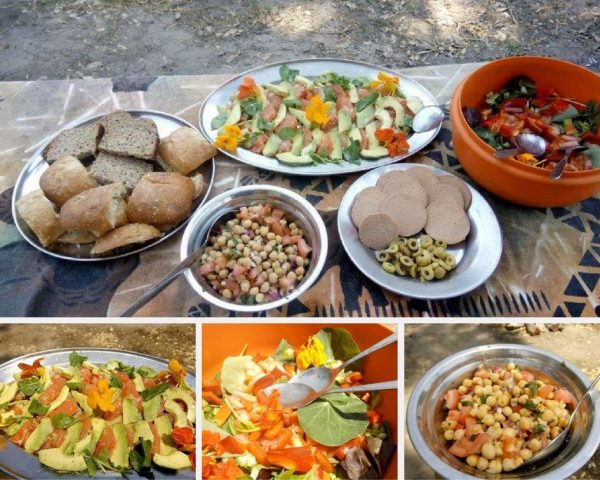 Our lunch was packed with colorful fruits and veggies

Curious about vegan food in other African countries? See these articles:

Once the temperature cooled down, our vegan guide Mogale escorted us on a walking safari around the island.

I was surprised to see that, unlike other guides who had led me on walking safaris in Africa, Mogale did not carry a gun. When I asked him why, he explained that not carrying a gun helped to create a relationship of mutual respect and trust between him and the animals.

He believes they understand that he doesn’t want to do them any harm. And in all the years that he’s been working as a guide, he’s never had a dangerous encounter with wildlife.

For me, the difference between this walking safari and others I had been on in Africa was like night and day. I had enjoyed my walking safaris in South Africa, but they had mostly focused on the plant, bird and insect life, along with oddities like animal dung and bones. The larger animals generally steered clear of us.

On the occasions when we did see large mammals, it was from a far distance. As soon as they got wind of us, they quickly moved away.

In the Okavango Delta, however, the animals did not run off. In fact, they sometimes kept walking towards us!

We were very fortunate to see large herds of zebra and wildebeest on both of our walks in the Delta. 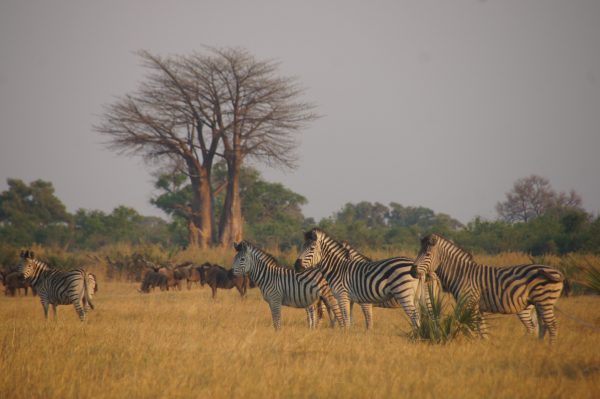 Zebras and wildebeests can often be seen together

It was a magical time, and I savored every minute of it until the sun went down behind two intertwined baobab trees. 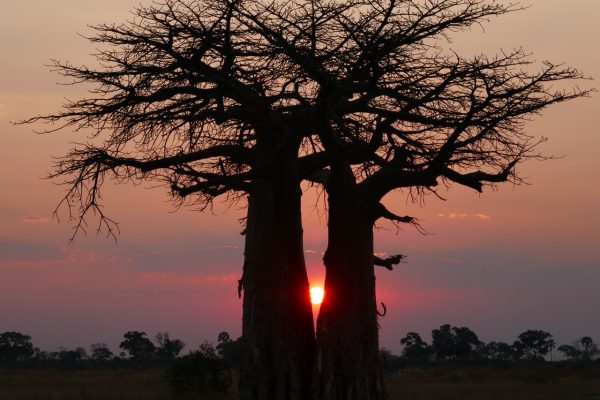 The sunsets in the Delta are spectacular

Like all good things, it ended much too quickly. If you’d like a longer Okavango experience, trips lasting for up to six days are possible.

Do keep in mind that a mokoro trip is more of an overall wilderness experience, and wildlife sightings are not guaranteed. If you want to have the best chance of spotting animals, I recommend combining a mokoro trip with a more conventional safari drive elsewhere.

The drive I did in Chobe National Park in northeastern Botswana was fantastic. But if you’re looking for somewhere closer to the Delta, the nearby Moremi Game Reserve comes highly recommended, and Old Bridge also arranges safaris there.

Have you been on safari in Africa? Would you like to? Let me know in the comments below!

Many thanks to Helene and Dave of the Old Bridge Backpackers, who offered me a discount on my mokoro trip. As always, opinions expressed here are entirely my own.