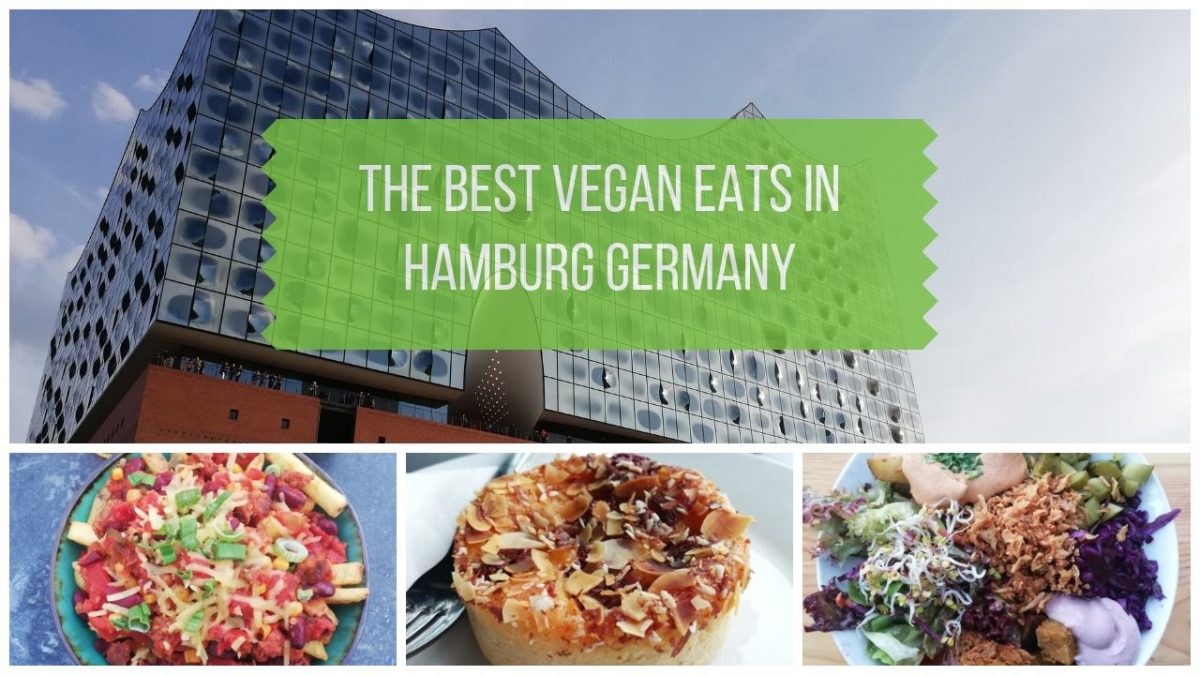 German cities are gaining a reputation as some of the top-rated destinations for vegan travel. While Berlin has even been dubbed the vegan capital of the world, Hamburg should not be overlooked either.

In this vegan guide to Hamburg, I'll share with you some of the best vegan eats in this vibrant, eco-minded city. 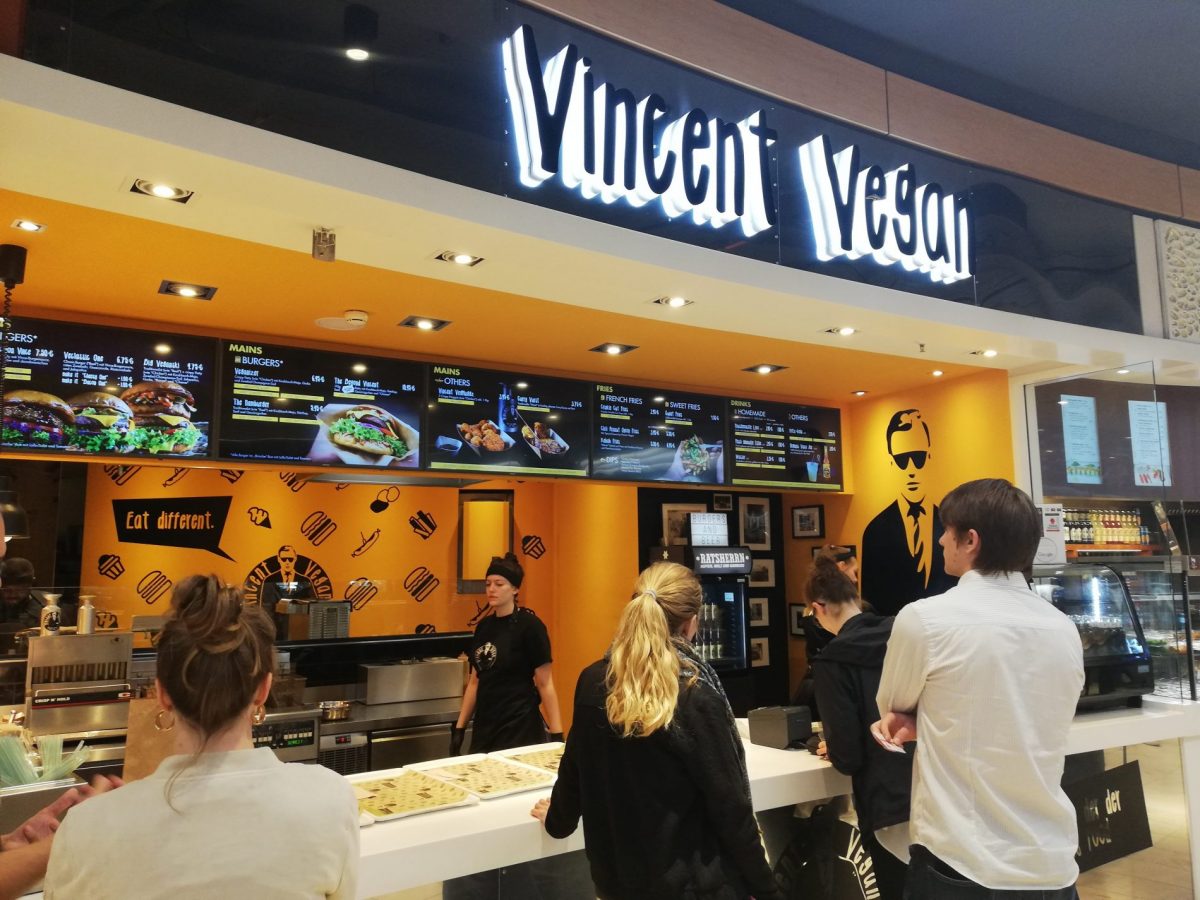 This 100% vegan burger joint is located inside the Europa Passage Shopping Mall. Granted, a shopping mall food court is never going to have great ambiance. But what Vincent Vegan lacks in atmosphere it makes up for in taste, price and location.

This is the most centrally located of all of Hamburg’s fully vegan eateries. They also run food trucks that make appearances at local events.

Vincent Vegan will always hold a special place in my heart, as it was here that I ate my very first Beyond Burger. If you live in North America, the freakishly realistic Beyond Meat products are probably old hat to you by now.

They've only recently made it across the pond to Europe, though, and after trying unsuccessfully to find one in Spain, I finally got my hands on a Beyond Burger at Vincent Vegan in Hamburg. I wasn't sure that I would like it, as I'd never been a big meat eater even in my pre-vegan days.

But I was completely blown away! It brought back all the nostalgic greasy goodness of eating a burger. If the Beyond Burger is too meat-like for you, they have plenty of other veggie burgers, as well as vegan currywurst and nuggets. And their sweet potato fries are to die for.

Vincent Vegan is not the only place in Hamburg that serves the Beyond Burger, by the way. Afterward, I saw it in several other vegan and vegetarian restaurants around town, so it seems to be taking Hamburg by storm! 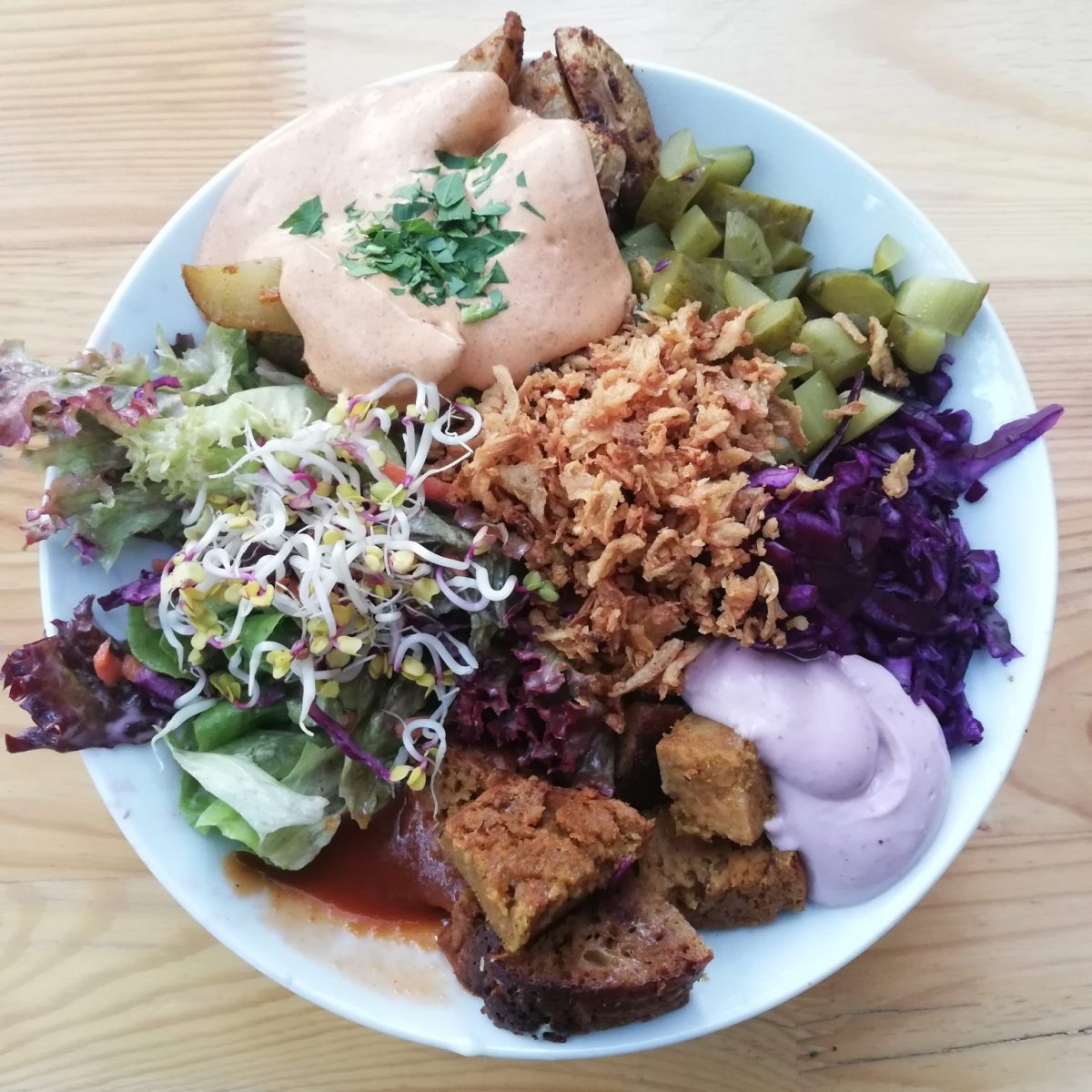 At Happen Pappen, you can order your burger on a bun or in a bowl

Your experience here will be different depending on when you come, so plan your visit accordingly. On weekdays, they have a changing daily lunch menu, while on the weekends they offer an all-day vegan breakfast menu with porridge, pancakes and lots more.

Their banana bread also gets rave reviews. I went there for dinner, though, when the menu is made up entirely of burgers. Actually, that's not quite true.

You also have the option of ordering your burger as a bowl, making it more like a salad if you want something a little healthier. The bowl option costs a bit more, but you also get lots more of the ingredients.

I chose the Schweden Burger in bowl form, which came with a seitan patty, BBQ sauce, cranberry mayo, pickles and fried onions. It was delicious!

The place was packed, but there was room to sit outside (weather permitting). I would definitely go back and try some of the other menu items. HappenPappen is located in Karolinenviertel, about halfway between Sternschanze and St. Pauli. 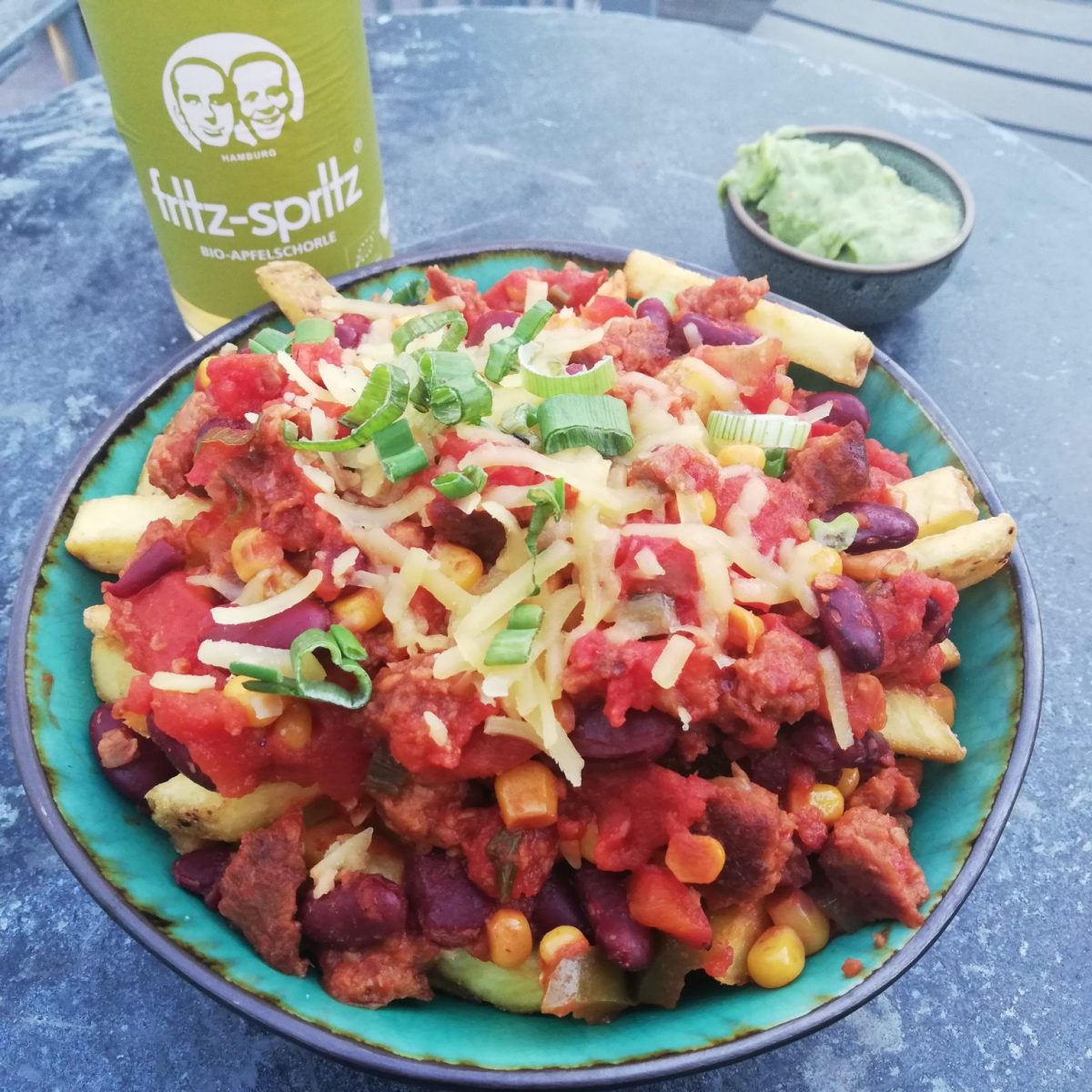 At Fried Club, an order of fries is a full meal all by itself.

This vegan junk food eatery is a relative newcomer to the Hamburg vegan scene and is giving older vegan burger joints like Froindlichst and Vincent Vegan a run for their money.

Fried Club is located inside Bidges & Sons, an eco-streetwear clothing store on the famous Reeperbahn in St. Pauli.

It's the perfect place for filling up before a night out on the town, or you can just watch all the shenanigans from a distance on the rooftop terrace that looks out over the lively Reeperbahn, Hamburg's red-light district.

There's also plenty of indoor seating in the lounge at the back of the store, so you shouldn't have too much trouble getting a table here.

On the menu, you'll find burgers (including the Beyond Burger), nuggets, loaded fries and decadent desserts. This is not a place for the whole food, plant-based crowd, although they do have a Caesar salad on the menu.

I chose the Mad Mexican version of their loaded fries, and let me be clear that this is definitely not a side dish! The big bowl of fries came topped with a generous helping of vegan Mexican chili featuring minced Beyond Meat, beans, corn and guacamole.

These fries were a full meal, and I was disappointed to find that I didn't even have room for dessert. 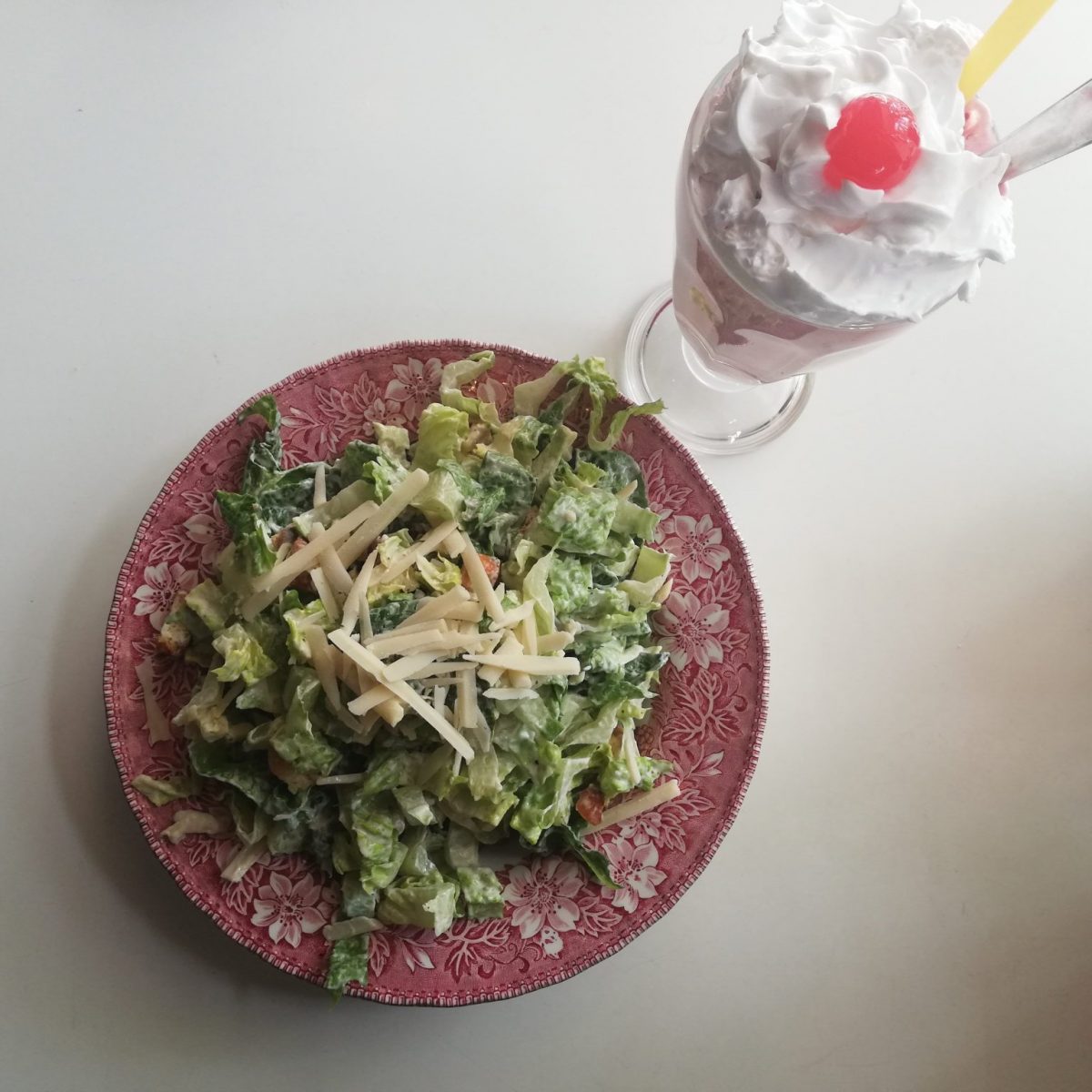 I was torn between healthy food and comfort food at Mamalicious, so I ordered a salad and milkshake.

This North-American-style diner has been around since 2011 and is located in the hip, if somewhat seedy, neighborhood of Sternschanze. Mamalicious is famous for its all-day breakfast menu, which includes vegan pancakes, French toast and tofu scramble.

If you don't feel like breakfast, other options include soups, salads, casseroles, burgers (including the Beyond Burger) and sandwiches. Having overdone it a bit with the vegan junk food at places like Vincent Vegan and Fried Club, I ordered the Caesar salad.

Of course, I promptly negated any health benefits of the salad by washing it down with a strawberry-raspberry milkshake. Probably not the best food and drink pairing, but both items were very good on their own, if not together.

It seems that there have been some positive changes at Mamalicious recently, one of which is that it has become more vegan-friendly. The milkshakes didn't use to be vegan, but they are now, and most menu items can be veganized. I had also read reports of rude service, but the two young ladies who served me were both very friendly. 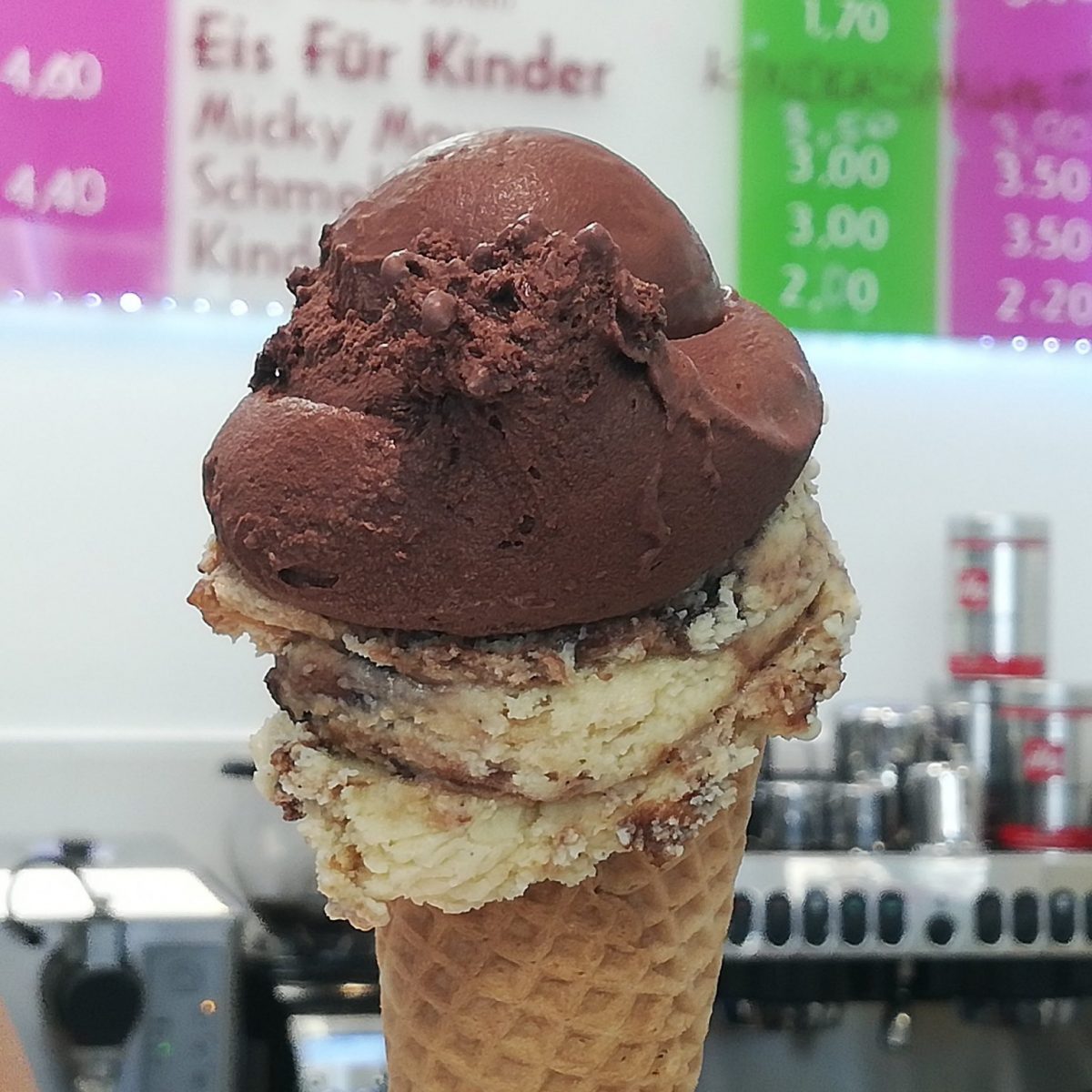 If you come to the edgy neighborhood of Sternschanze to eat at Mamalicious, be sure to stop in at Die Eisbande for ice cream afterward. All of the cones are vegan, as are more than half of the ice cream flavors.

I highly recommend the Snickers flavor, which is amusingly labeled as "Schniggers". If the weather is warm (and let's hope it is if you're eating ice cream), you can sit at one of the outside tables and watch the world go by while you enjoy your frozen treat. 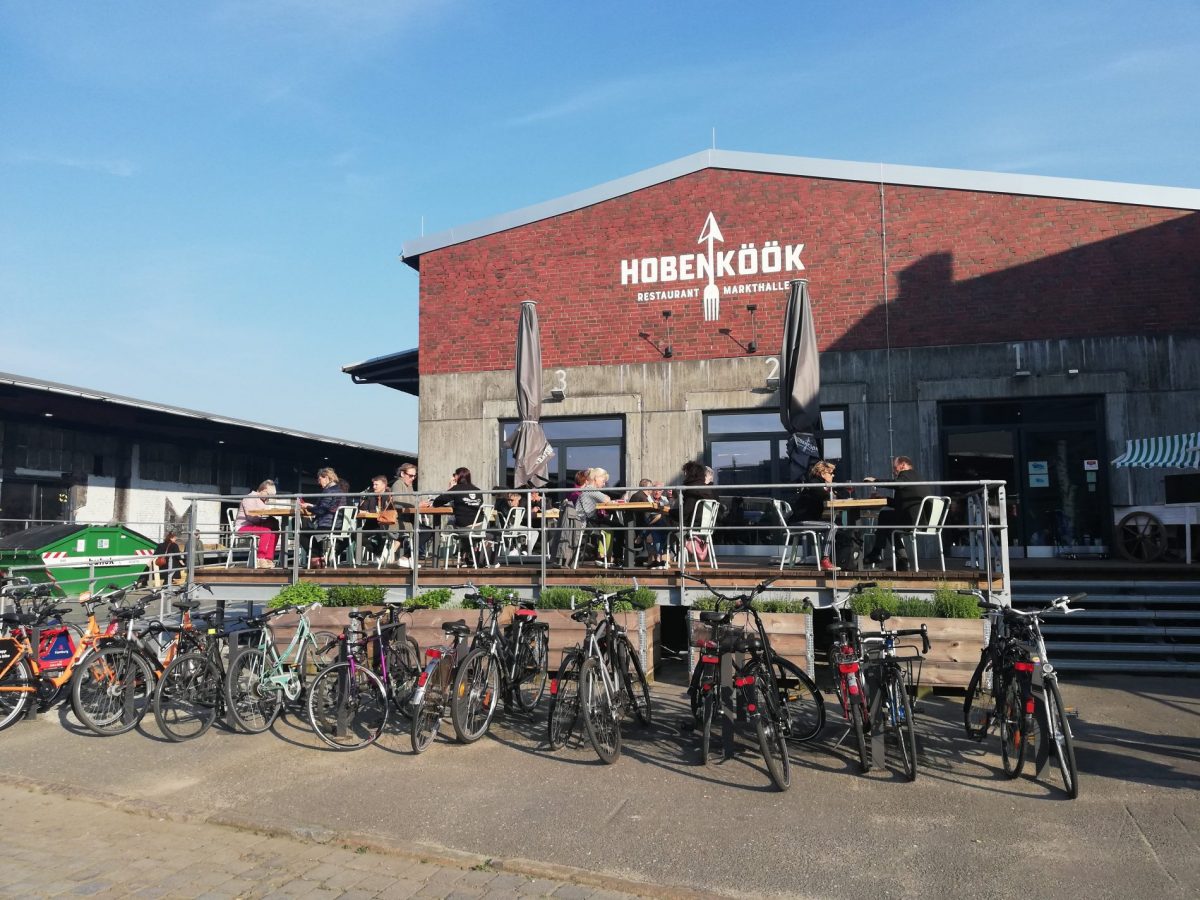 The name of this restaurant means "harbor kitchen" in the local Hamburg dialect, and it's located in Hamburg Oberhafen, which used to be an industrial port and warehouse area in the 19th century.

You might not realize it at first, but the building that now houses Hobenköök is an old, abandoned train station that was once used for freight trains. The area is now being revitalized and is becoming a creative and cultural hub in Hamburg.

Hobenköök prides itself on using local and seasonal ingredients, and all the food comes from within 200 kilometers of Hamburg. This requires lots of creativity on the part of the chef, especially in winter, when seasonal options are fairly limited in northern Germany.

I was a bit disappointed to see that when I visited the menu when included just one vegan starter and one vegan main. At a place that seems to really care about sustainability, I would have hoped to see more plant-based options.

Nevertheless, the dishes were healthy, flavorful and well-presented. My starter was a mix of local vegetables with pickles and rye crackers, and the main dish was oven-roasted asparagus with mashed sweet potatoes and rainbow Swiss chard.

Hopefully, their eco-friendly values will lead them to focus more on veggie options in the future. The attached market also carries some great products by small, local producers and is definitely worth checking out.

Prices are higher than average, as you would expect for products of such high quality. For a special occasion, particularly one you're celebrating with meat-eaters, Hobenköök could be a good choice. 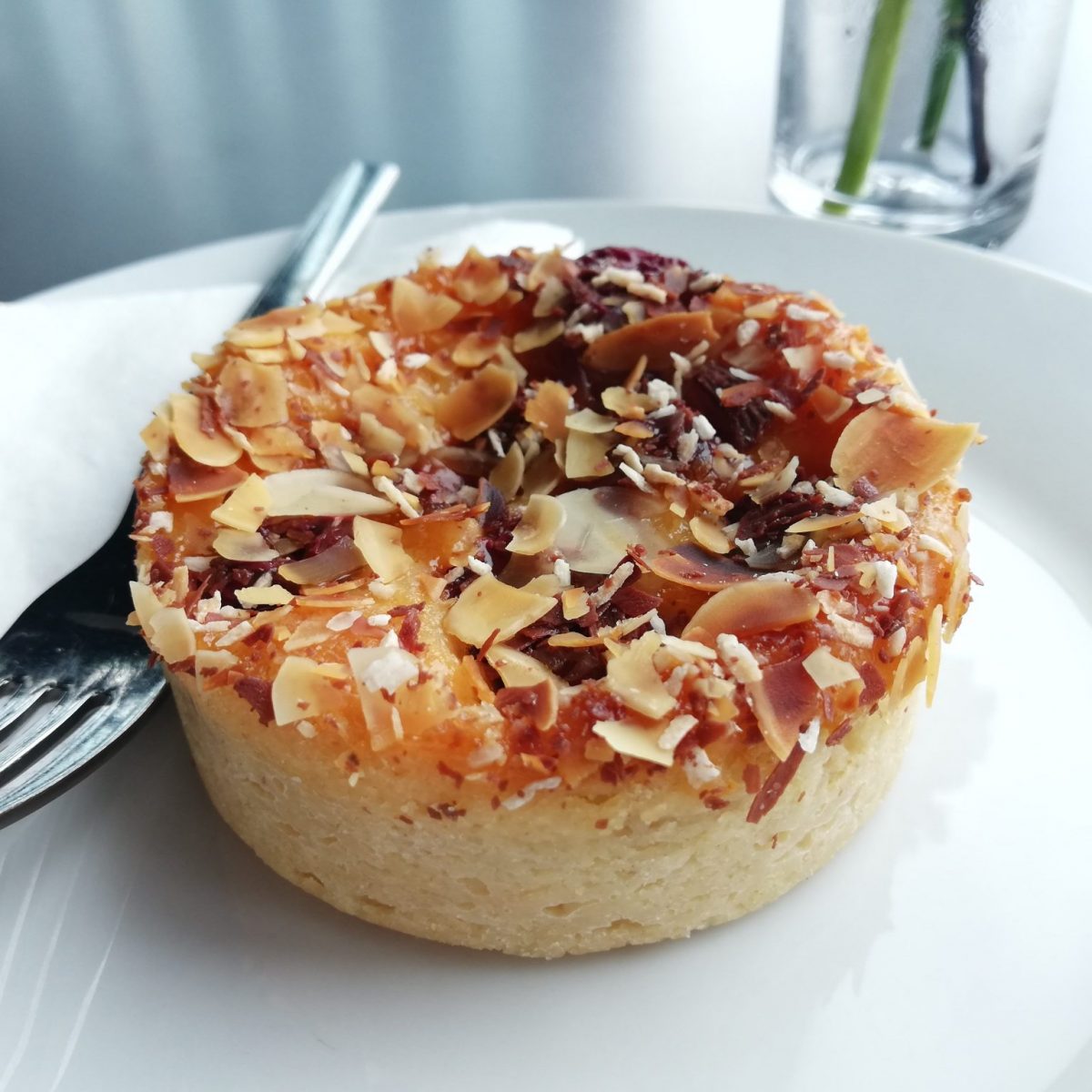 The semolina, cherry and coconut tartlette at VJU is to die for!

Speaking of reusing abandoned buildings in a creative and sustainable way, another great example of this is the World War II air-raid bunker in Wilhelmsburg.

It's been transformed into a clean energy power plant, and viewing platform on the roof is open to the public from Friday to Sunday. In addition to the great views of Hamburg, you can also enjoy some yummy vegan cake at the café on the top floor.

I can't really recommend the brunch buffet, as there are not enough vegan options to make it good value for money. Instead, come for a drink and one of their awesome vegan cakes!

The two vegan cakes are the apple tartlette and the semolina, cherry and coconut tartlette. I can highly recommend the latter, which is moist and sumptuous.

They are made by a local bakery called Schmidt & Schmidtchen that has several locations around the city, so you could also seek out the cakes at one of their branches. Though of course, you would miss out on the views and the unique experience of eating cake in an air raid bunker.

Sadly, I didn't have time to check out all the vegan Hamburg spots this time around. Some vegan eats that I'll definitely try on my next trip include the vegan burgers at Froindlichst, the vegan pizza at Vistro and the vegan Vietnamese food at An Vegan House.

Vegan-Friendly Places to Stay in Hamburg 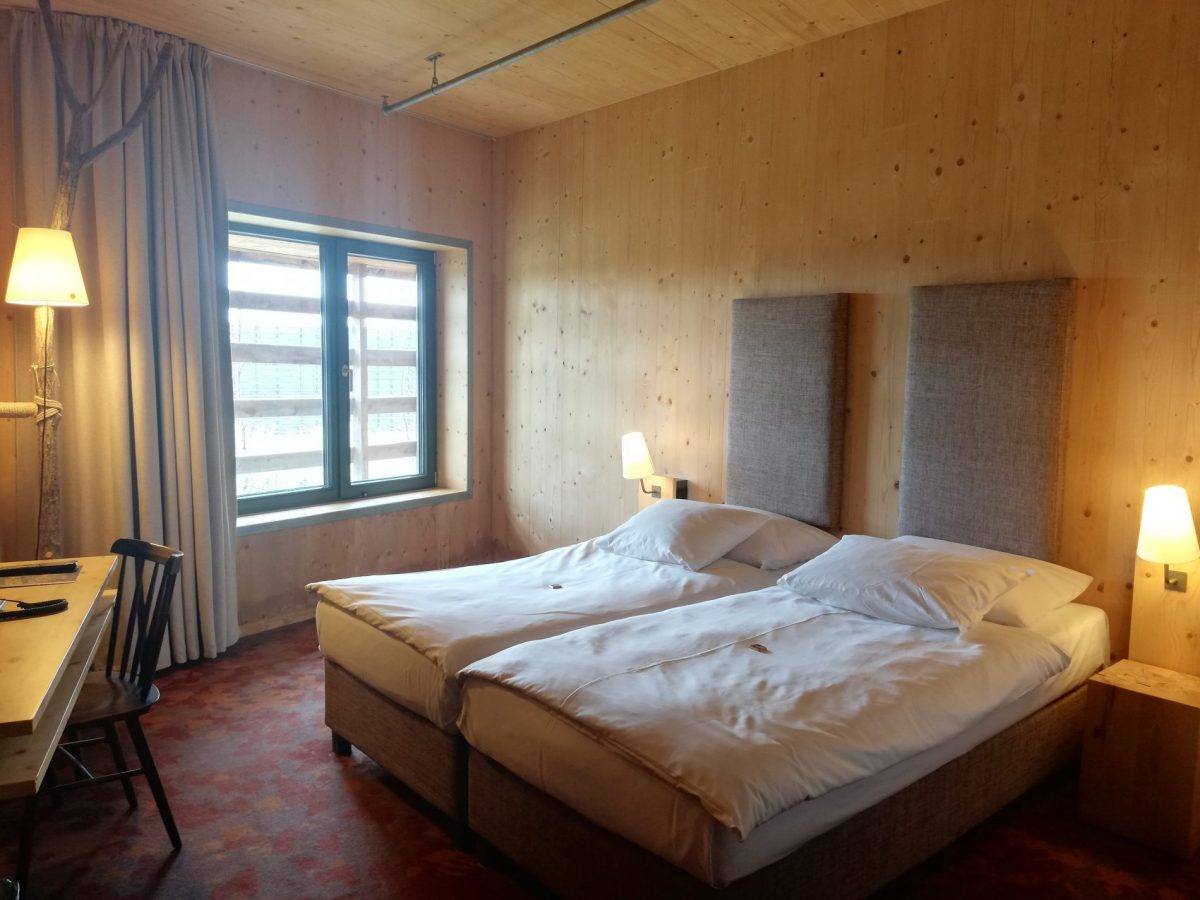 Getting back to nature at the Raphael Hotel Walderhaus in Hamburg

The name of this hotel means "forest house" in German, and it's a joint project between the Raphael hotel chain and a forest protection NGO in Germany. I was kindly hosted here as part of a press trip that was focused on sustainability in Hamburg.

This was a great choice for our group, and I thoroughly enjoyed my stay here. The forest theme is evident both in the interior decoration and in the exterior, which is an "inhabited façade" that provides shelter for small animals and birds.

All the toiletries are fully biodegradable and cruelty free, though you should check to see which ones are vegan, as the soap in my room contained honey. 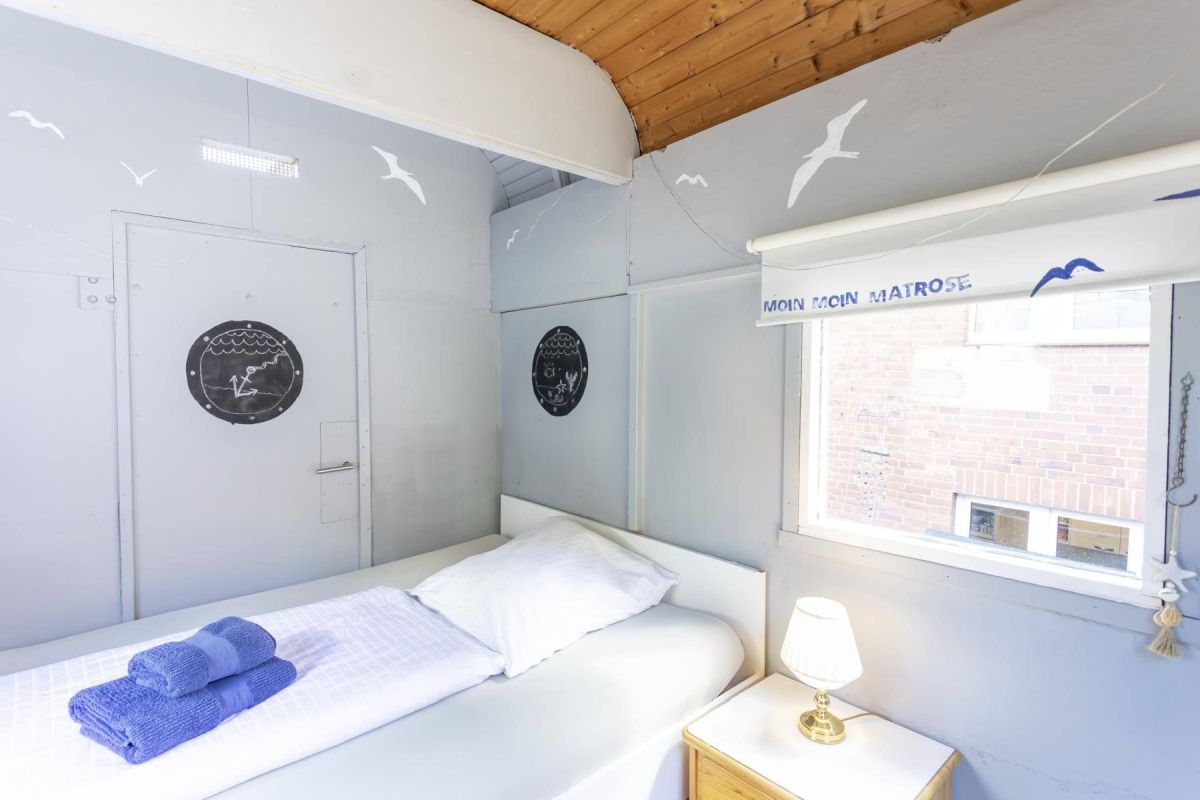 Next time I visit Hamburg, I definitely want to stay at the Green Haven Vegan Bed and Breakfast. Their accommodation options range from a small trailer on the terrace to a whole private apartment.

With upcycled furniture, fair trade certified bed linens and vegan and cruelty free detergents and other products, this place ticks all the boxes for ethically-minded travelers. It's also very affordable, and dogs are welcome.

More Tips for Your Trip to Hamburg

Now that you know all about the best vegan food in Hamburg, what about sightseeing? Don't worry, I've also written a thorough guide to the best things to see and do in Hamburg.

I found it really handy to have the Hamburg Card when sightseeing in Hamburg. With the card, you get free transport on all buses, trains and harbor ferries, plus discounted entry to more than 150 attractions.

Looking for vegan food in other German cities? Check out this vegan guide to Leipzig by Veggie Visa and these vegan guides to Berlin and Munich by Mostly Amélie.

And if you're looking for off-the-beaten-path places to visit in Germany, check out these great holiday options in and around Lake Constance. 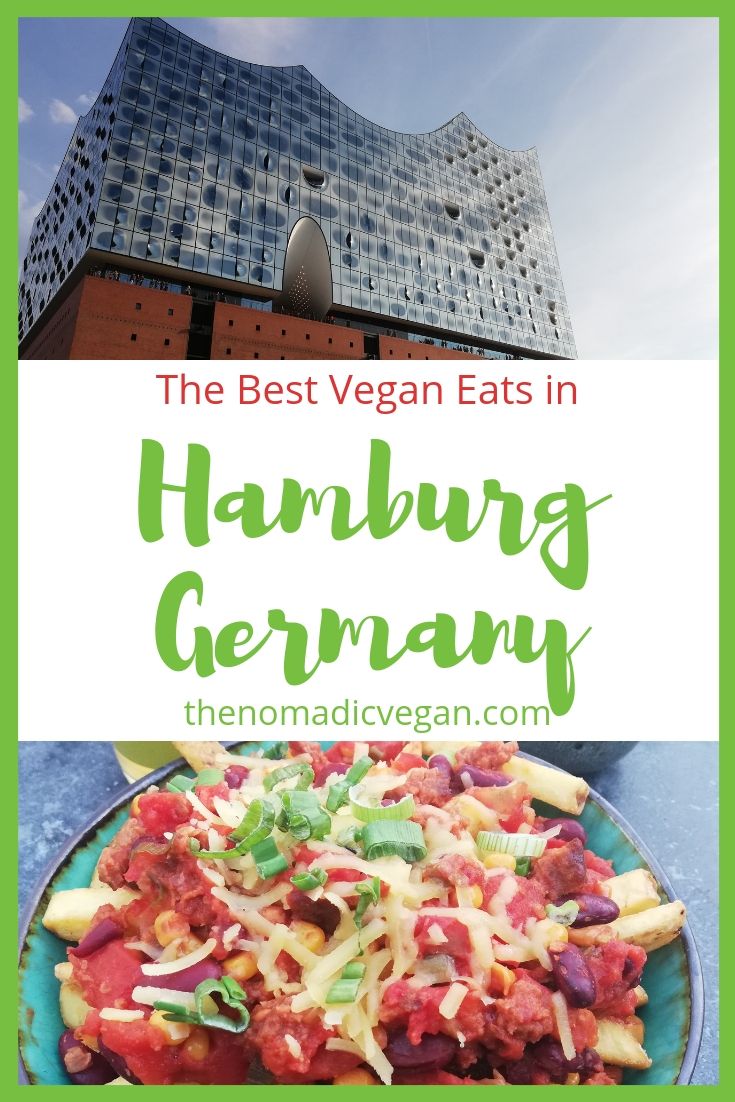 Many thanks to Hamburg Tourismus and Raphael Hotel Walderhaus for hosting me on this trip. As always, opinions expressed here are entirely my own.