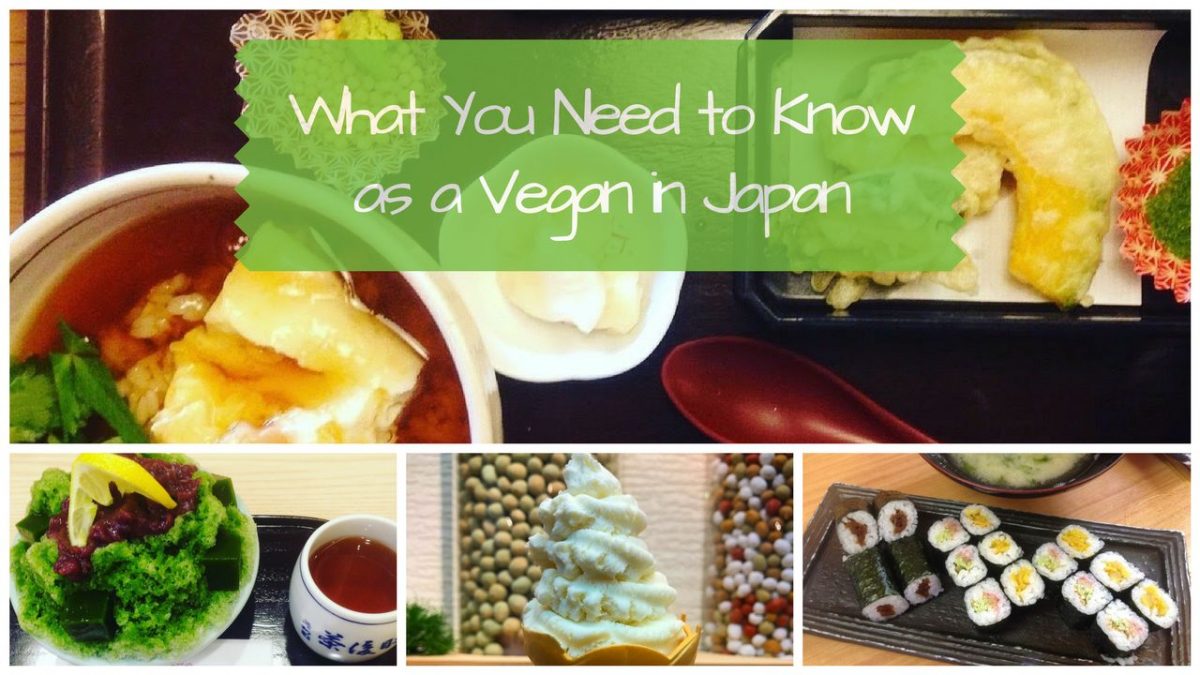 Tips for Eating Vegan in Japan

EDITOR'S UPDATE April 2020: This article was originally published as a guest post in March 2018, when I had not yet been to Japan myself. Now that I've spent a month traveling all over the country, I will soon be updating this article with lots more info.

In the meantime, check out the links below to all the articles I've written about Japan so far. More vegan guides to Japanese destinations coming soon!

Is it possible to be vegan in Japan – the land of sushi?

Last summer, I traveled to Japan for the first time as a vegan and found out. I didn’t really know what to expect before going, but I anticipated a challenge since the country is famous for seafood and Kobe beef.

The fact that I was traveling with non-vegan friends would make it all the more challenging. I did a little bit of research before leaving and prepared for the worst by packing a bunch of Larabars and nuts with me. Little did I know, I was in for a ride.

Here’s my honest account of what it was like on my first trip as a vegan in Japan. I’m about to share the good, the bad and the ugly, including the mistakes I made, so that you can avoid them.

To be fair, I was only in Osaka for a day, but I found it quite difficult to be vegan in this bustling city. Most of the food that was popular here was not vegan, and I ended up making several mistakes here.

After sightseeing at the Osaka Castle, my friends and I found a restaurant nearby that said “vegetable curry” on their menu, so we went in. Turned out, this restaurant only served okonomiyaki and takoyaki, two dishes that Osaka is famous for.

Okonomiyaki is similar to an omelet, usually made with seafood or pork, and takoyaki is squid cooked in balls of dough. The words “vegetable curry” on the menu were only referring to a flavor of those dishes, but there was no way we could’ve known that, since the rest of the menu was in Japanese.

If I had read this very helpful article by More Than Veggies beforehand, I would have known that, even if there had been a vegetable curry on the menu, it probably would not have been vegan. 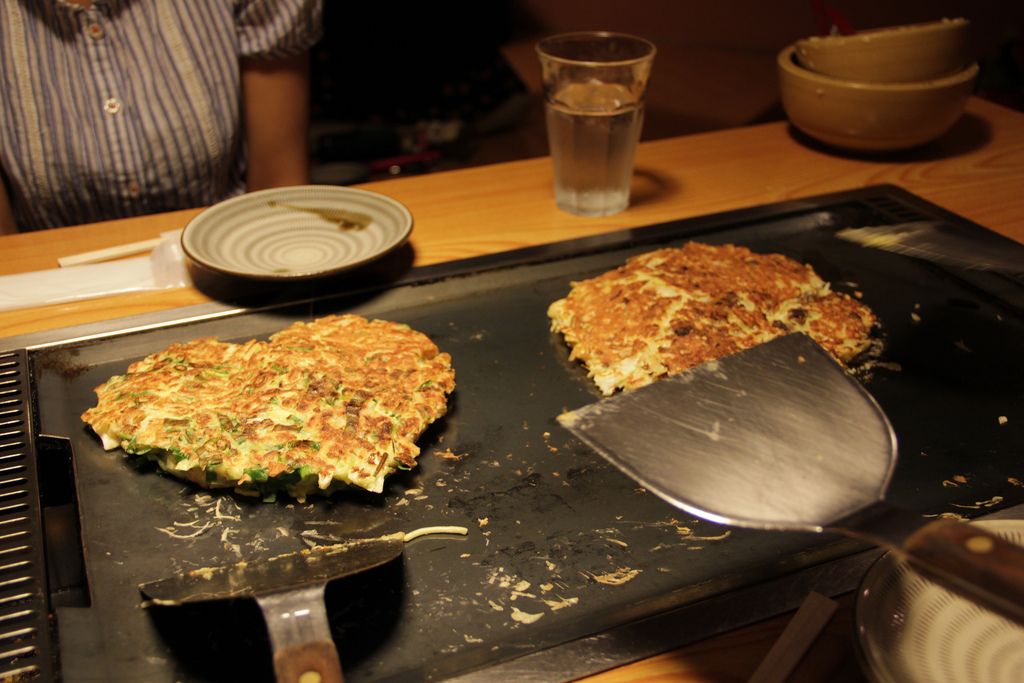 Okonomiyaki is a Japanese omelet and is NOT vegan. Live and learn.

I tried explaining to the waiter in English and broken Japanese that I didn’t eat meat, and he understood. However, he said the only thing he could make for me was a vegetable okonomiyaki, which still contained egg.

At this point, I felt this was the best option because we were all starving, we couldn’t read the rest of the menu (Google Translate didn’t work), and we didn’t see any other restaurants nearby.

At night, I made a similar mistake again by going to a ramen restaurant that only served one type of ramen, but we didn’t know that until we had already lined up for 45 minutes. So I ended up ordering whatever ramen they had, didn’t drink the soup, and just ate the noodles and vegetable toppings.

In hindsight, I could’ve probably avoided these mistakes with better planning, but it was difficult to anticipate them without knowing what was normal first. Furthermore, it is also hard to think when you are tired, jetlagged, and don’t speak the language.

I wasn’t proud of the mistakes I had made on my first day as a vegan in Japan, but I didn’t want to dwell on them either, so I decided to accept them as lessons for the rest of the trip.

The next day, my friends and I woke up to catch the train to Kyoto. At the train station, I bought myself an ice coffee and an ume onigiri – a triangle of rice wrapped in seaweed and filled with plums.

These were sold all over Japan in convenience stores and markets. They became my go-to snack in Japan whenever I couldn’t find anything to eat. 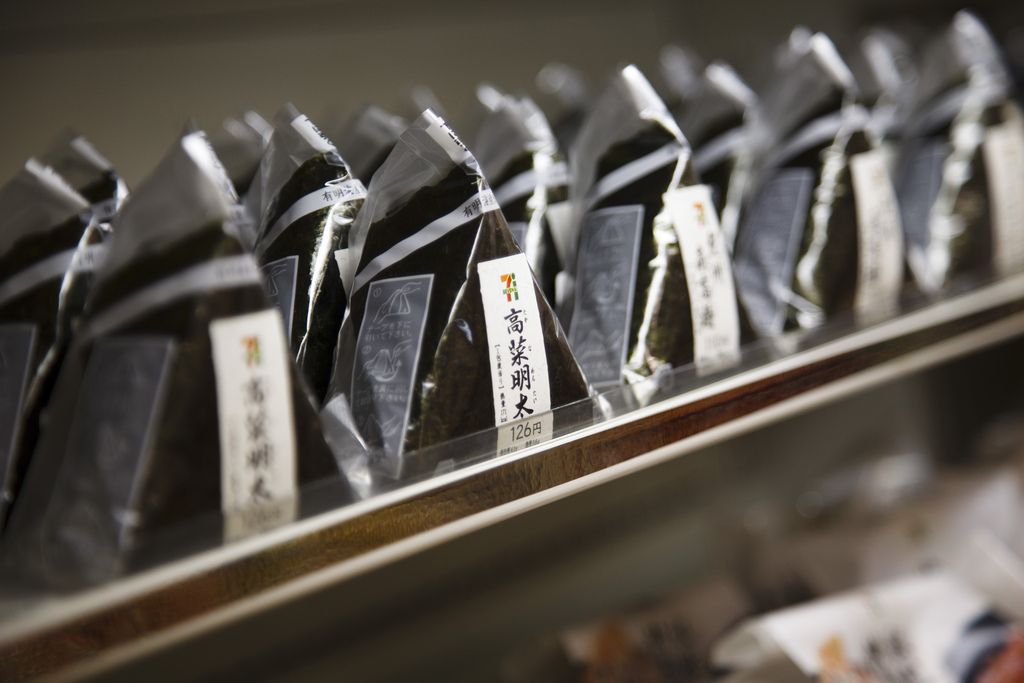 These rice triangles wrapped in seaweed are sold in convenience stores all over Japan.

EDITOR'S UPDATE: For lots more recommendations on where to find vegan food in Kyoto, see this article.

By lunchtime we were in Kyoto, and we had lunch at the Nishiki Market, a large food hall with tons of family-owned stalls serving traditional and modern Japanese food. The best part was that they had plenty of vegan options, and my friends and I could choose what to eat without having to part ways.

I ended up eating some more freshly made onigiris with different types of pickled vegetables, a skewer of roasted rice, and the best soy ice cream I’ve ever had in my life. 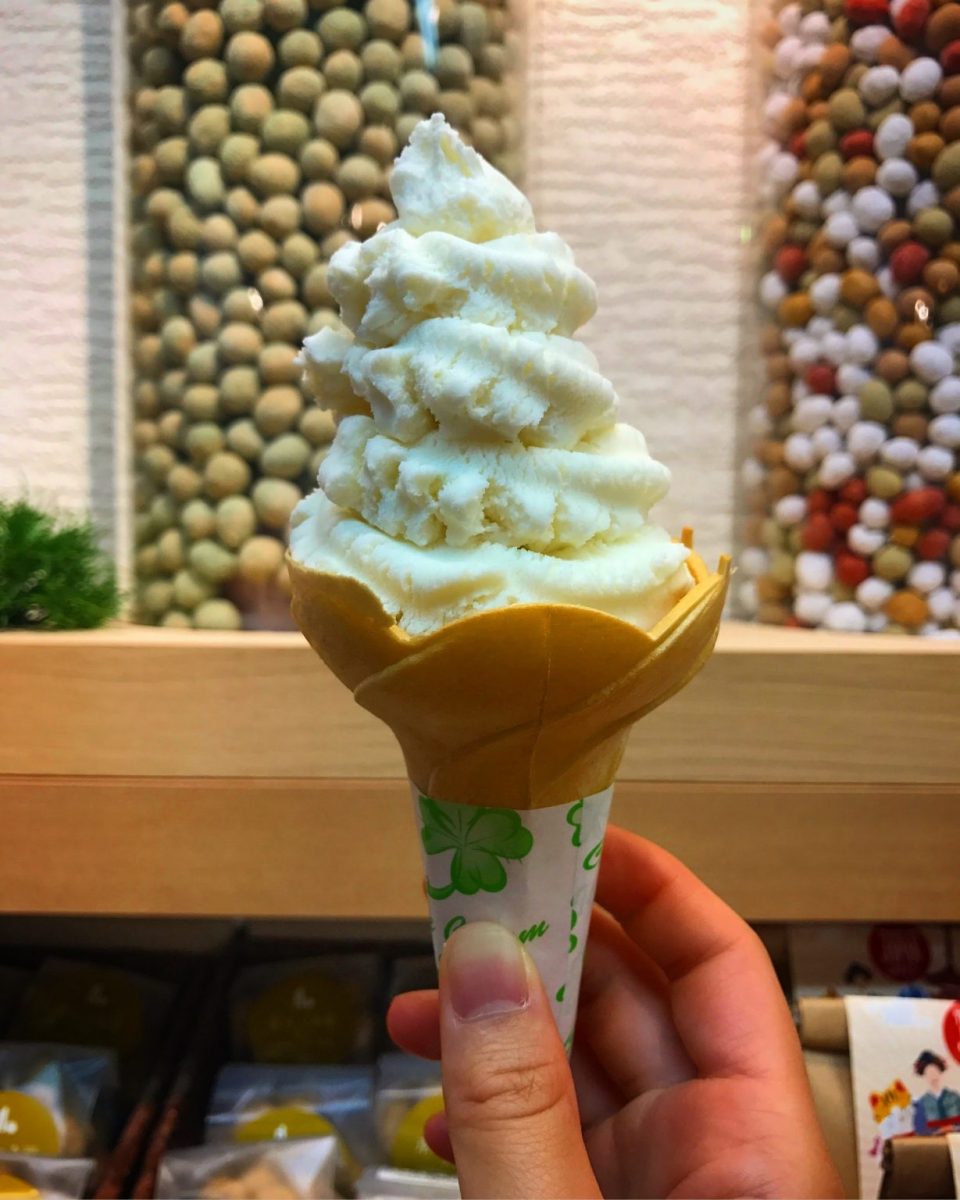 The soy ice cream in Japan is delicious!

One thing to note about Japanese culture is that they love soy, so everywhere you go you’ll find soy ice cream, soymilk, soy donuts and even soy croquettes.

On our way back to the hotel, I spotted a vegan restaurant called Veg Out. At dinnertime, I returned by myself and ordered a platter of locally grown vegetables.

The dish contained radishes, carrots, beets and some other vegetables that I did not recognize. It was incredibly flavorful and very much needed, since at that point I’d only had pickled vegetables in Japan so far. Fresh vegetables were surprisingly hard to find in Japan. 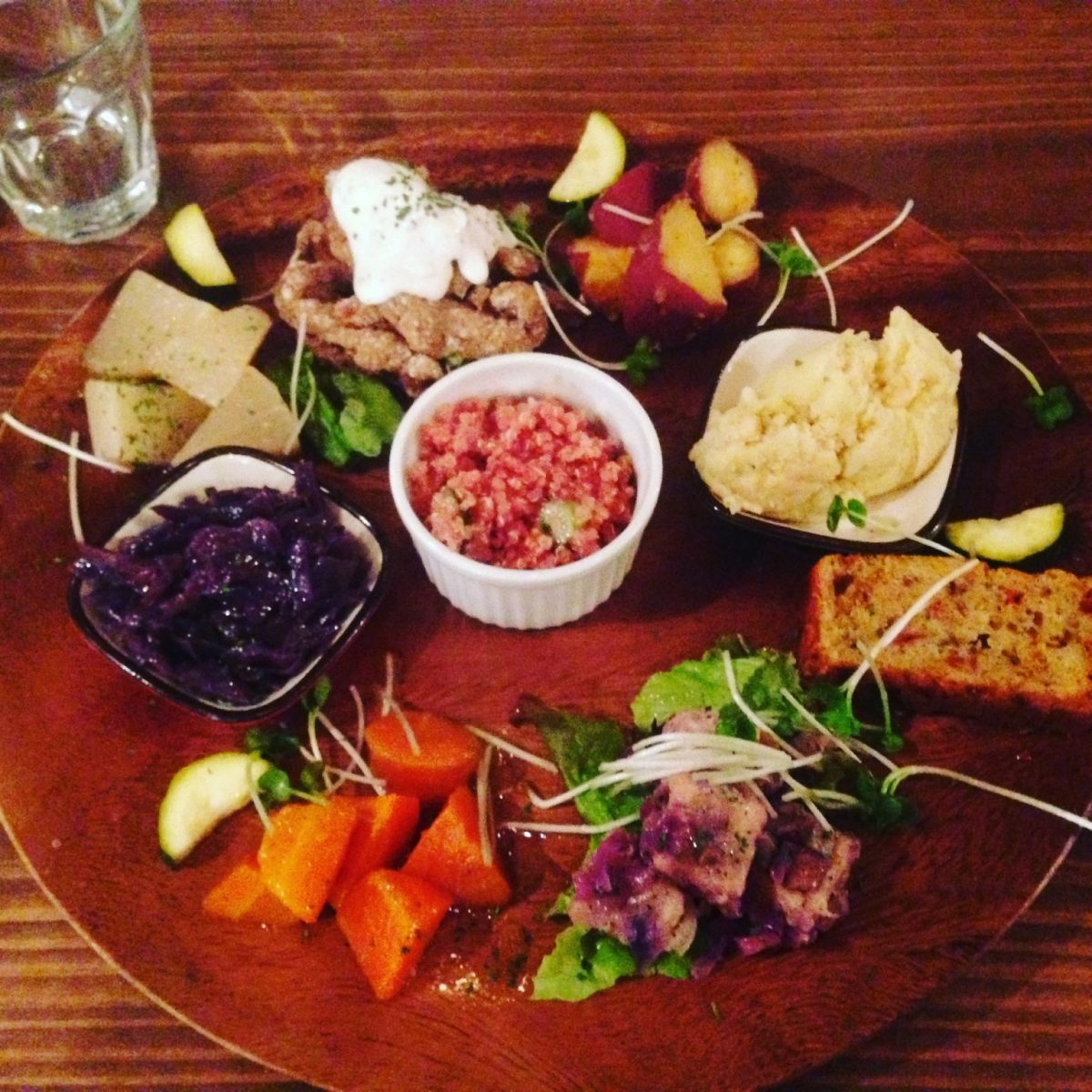 If you're missing fresh vegetables in Japan, you can get your fix at Veg Out in Kyoto.

At Veg Out, I also had a chance to chat with the waitress about what Japanese people thought of veganism. She told me that veganism was still a relatively unfamiliar concept to most Japanese people, but that the attitude towards it is mostly curiosity.

The chef in the restaurant also recommended two vegan restaurants for me to try when I got to Tokyo. I was really touched by their friendliness.

The following day, my friends and I visited the famous Arashiyama Bamboo Forest and tried out kaiseki, which are artfully crafted multi-course meals that Kyoto is famous for.

Thankfully, they did have ones without any meat, and I was able to look up all of the Japanese ingredients to make sure they were vegan. Most of them were made from beans, flour and soy. 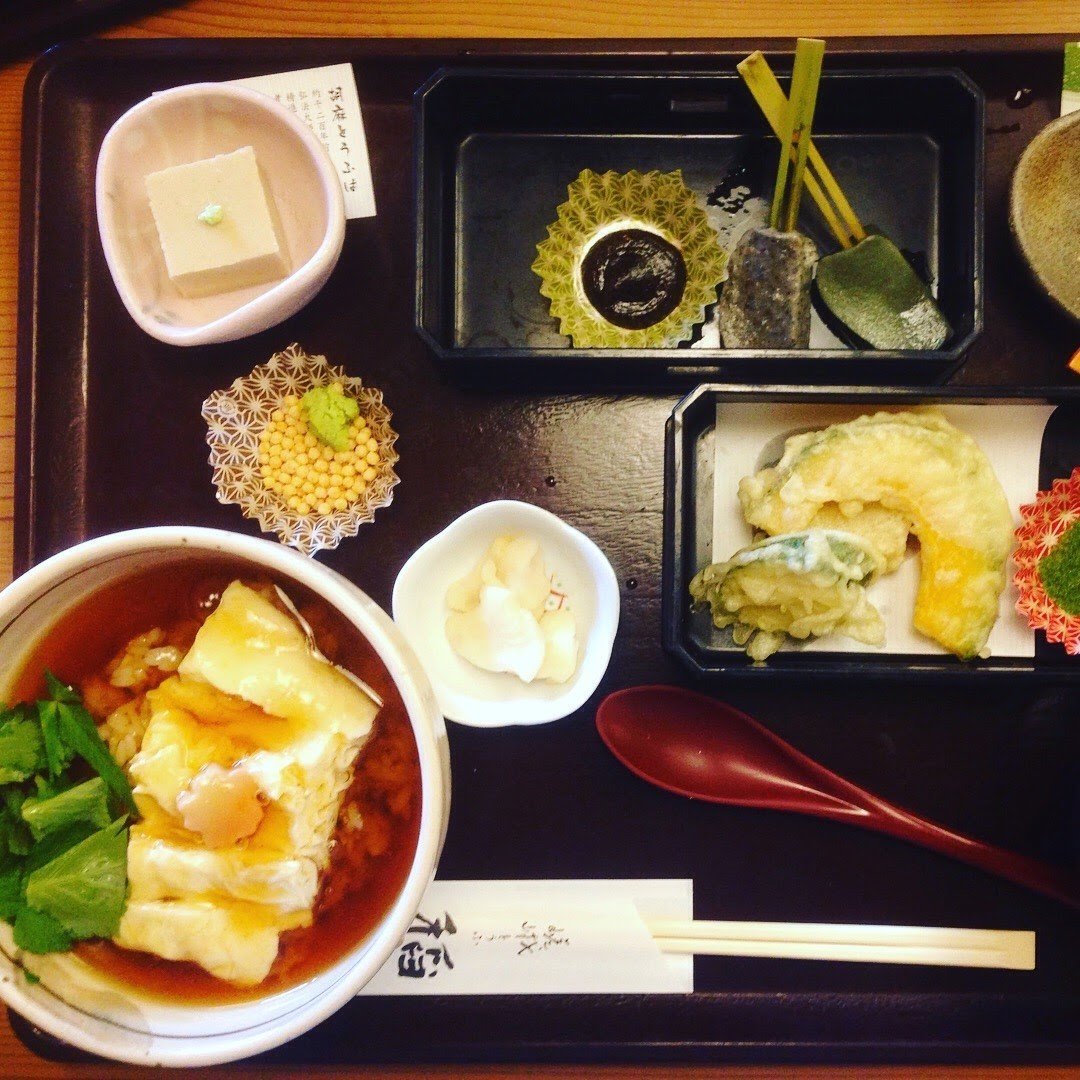 Afterward, we walked around the Gion district, also known as the “Geisha district”, and treated ourselves to some nice, cold, matcha shaved ice. It was so refreshing in the sweltering heat. In Kyoto, I had started to find my feet as a vegan in Japan. 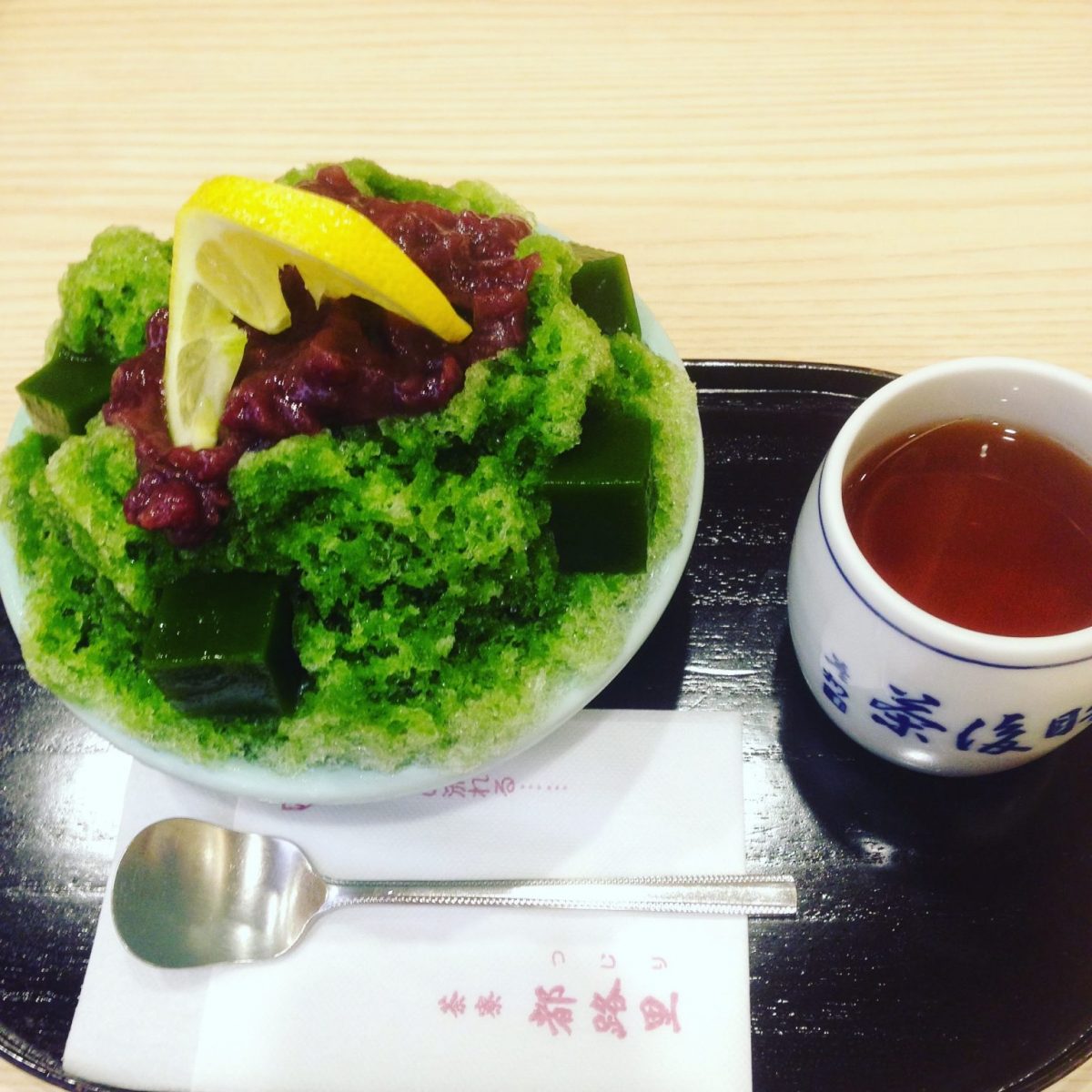 Our third and last stop in Japan was Tokyo. We stayed in the Shinjuku area, and, thanks to the Happy Cow app, I was able to easily locate many vegan restaurants and restaurants with vegan options. I found everything from vegan donuts in train stations to macro bowls in supermarkets. 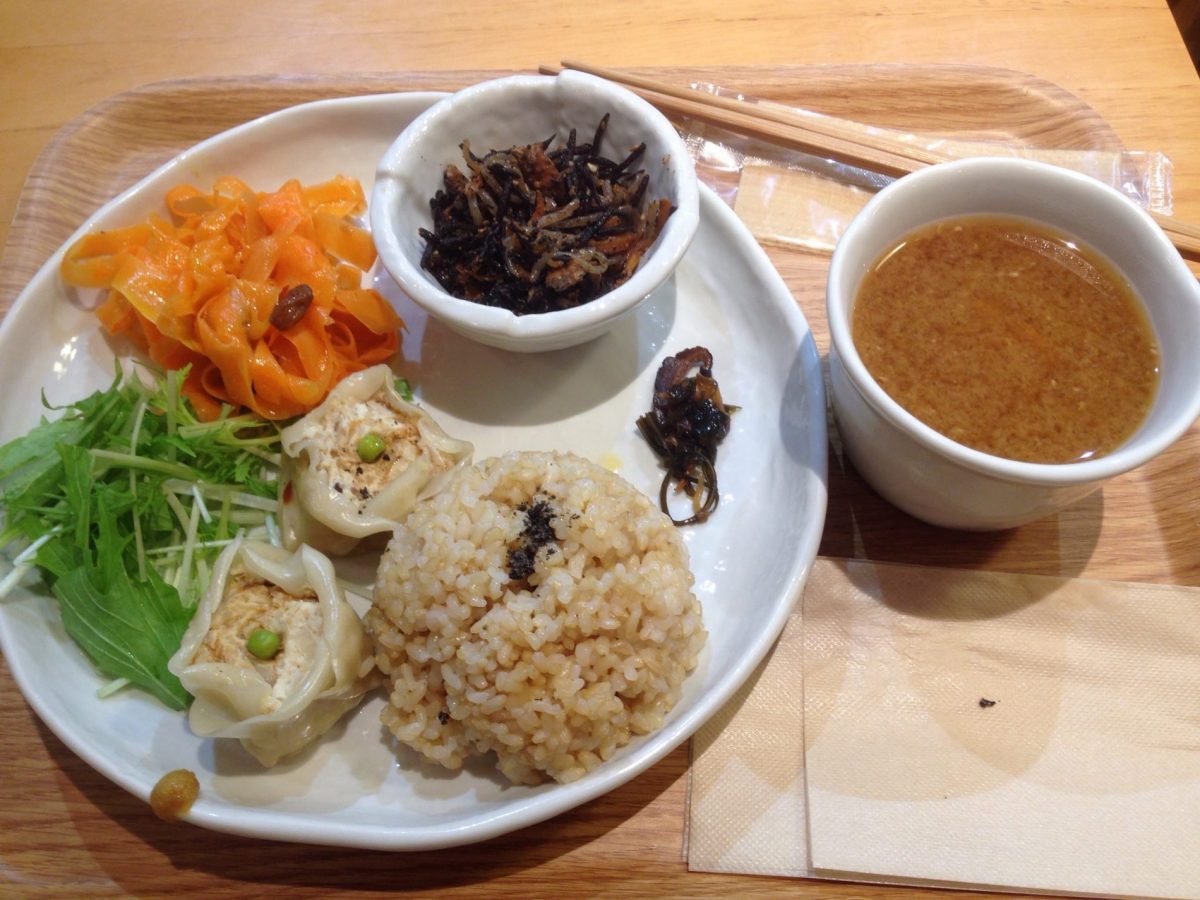 A vegan macrobiotic meal at a health food marketin Tokyo

At night, my friends and I also got to go check out the famous Omoide Yokocho alleyways, where people usually go for drinks and grilled meat. But, to my delight, they also had plenty of grilled mushrooms, green peppers, and tofu.

One of my favorite meals in Tokyo was at Ain Soph Journey, a restaurant that one of the chefs in Kyoto had recommended to me.

The menu was a mix of Japanese and western style dishes. I ended up ordering something called the “Heavenly Pancakes”.

Once I tasted them, I understood why they were called that. They were light and airy like clouds, and the freshly made whipped cream was to die for. My friends ended up ordering rice with tempeh, which was also delicious. 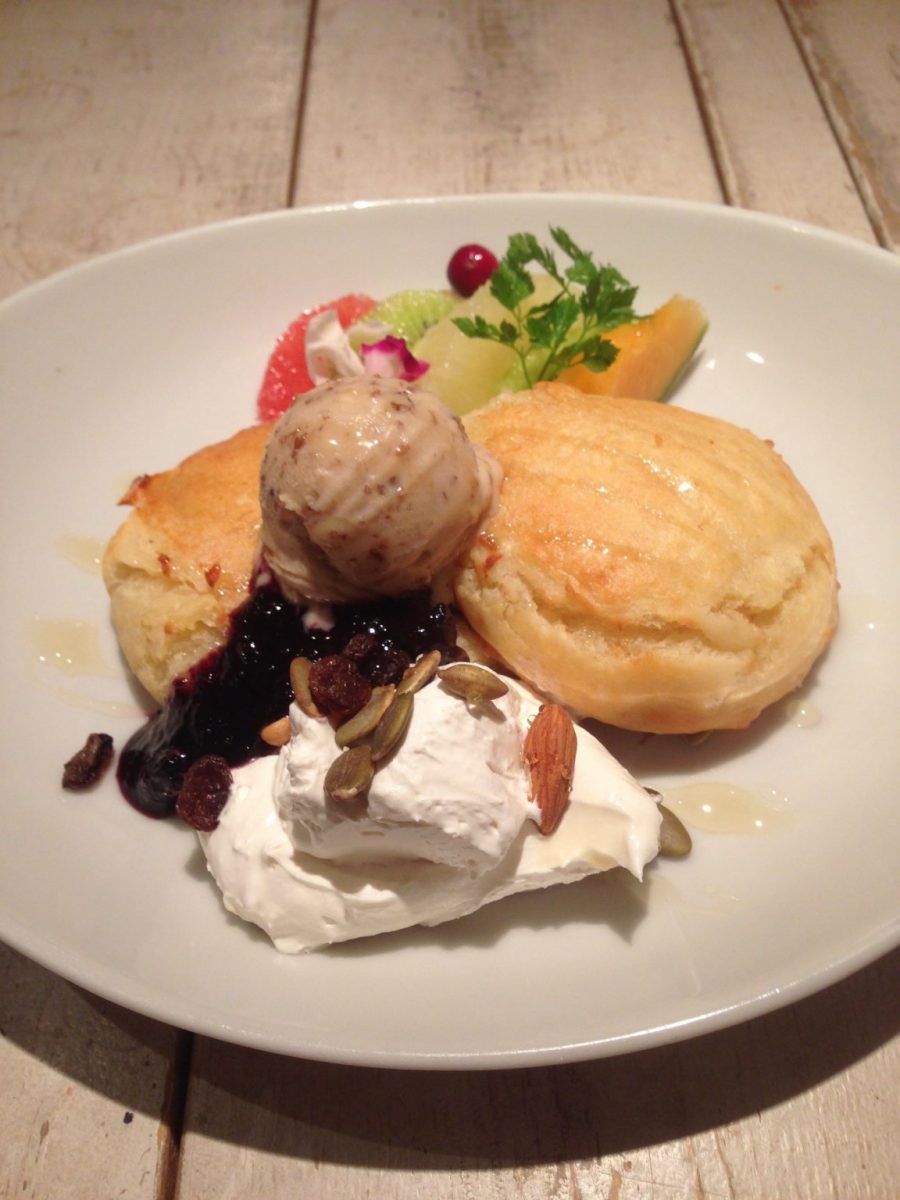 "Heavenly Pancakes" at Ain Soph Journey. Look how light and fluffy they are! 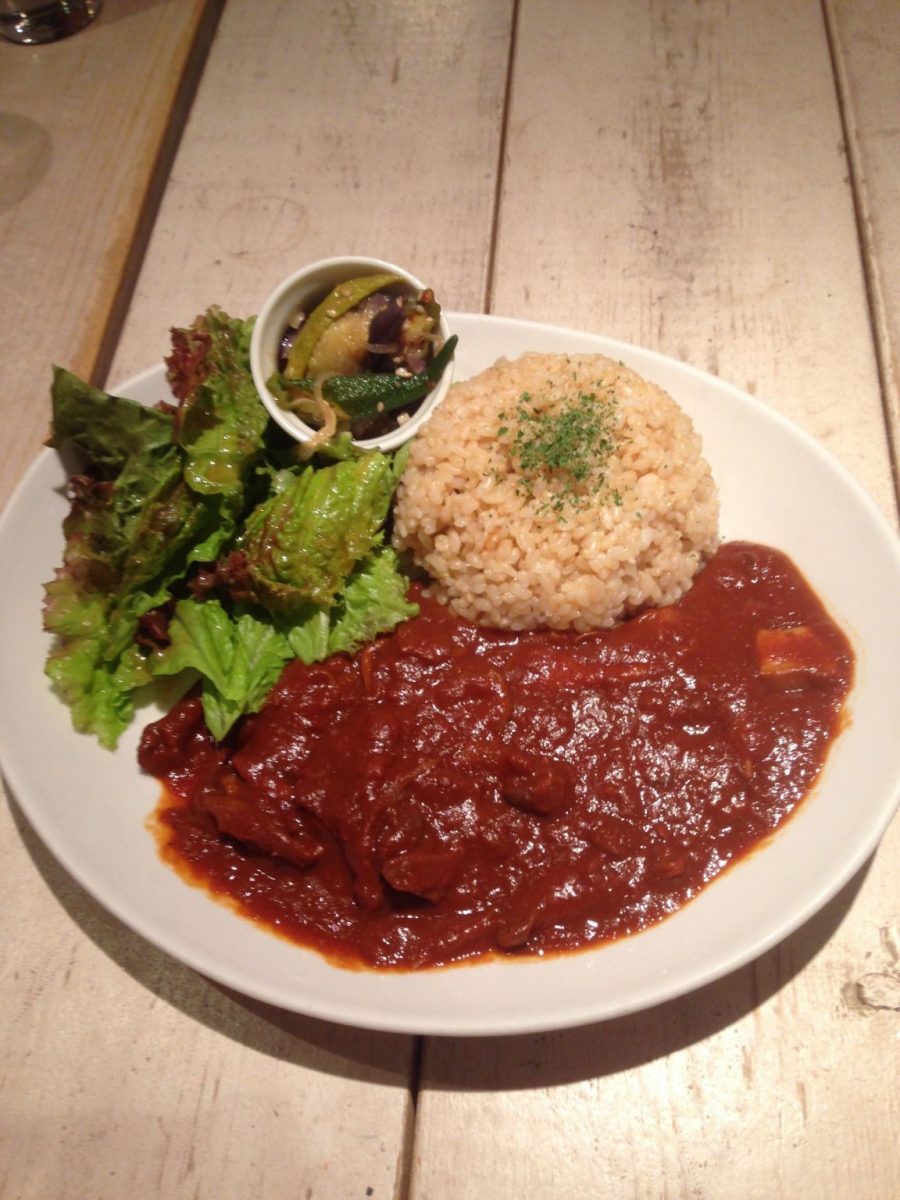 If you're looking for a savory dish, the rice with tempeh is a great option.

To cap off my vegan journey in Japan, I stopped by 8ablish, the other vegan restaurant that had been recommended to me. It was a more upscale vegan restaurant and a bit pricier, but I figured I could treat myself to some fine wine and vegan ice cream.

The ice cream was made from soy milk, and it was rich and decadent. I chose hazelnuts, chocolate caramel and chocolate biscuits as my toppings and ate it while I watched people walk by. I couldn’t have asked for a better way to end my trip. 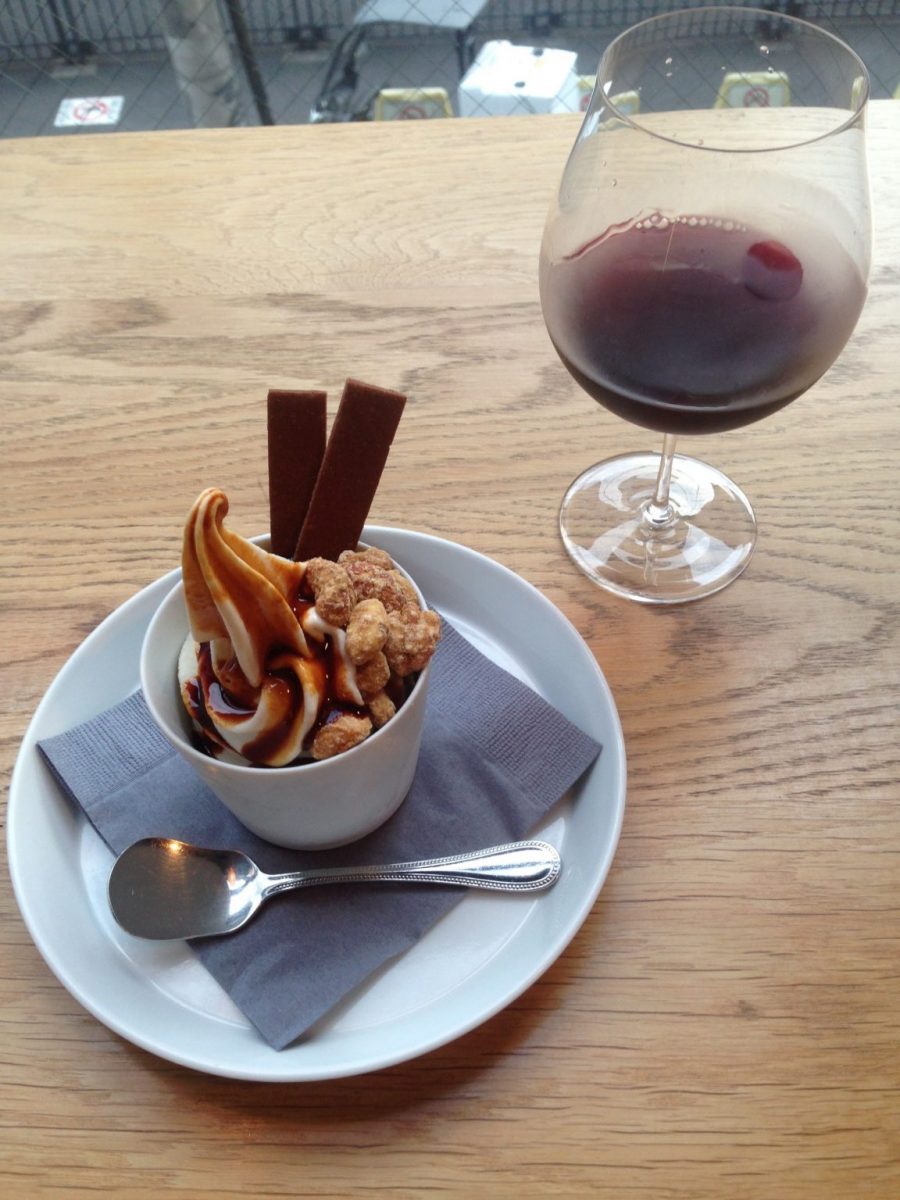 Drink some wine, eat some ice cream, and watch the world go by.

Overall, it is definitely possible to travel as a vegan in Japan, but it does take a bit of research and patience due to the language barrier. The vegan movement in Japan is growing strong, especially in Tokyo and Kyoto, and you should have no problem finding vegan food there.

However, in cities like Osaka or Fukuoka , where veganism is not as popular, you do have to plan a little more. This guide to Kyushu has some helpful tips on finding vegan food in Fukuoka and other places on the island of Kyushu.

Tips for Being Vegan in Japan 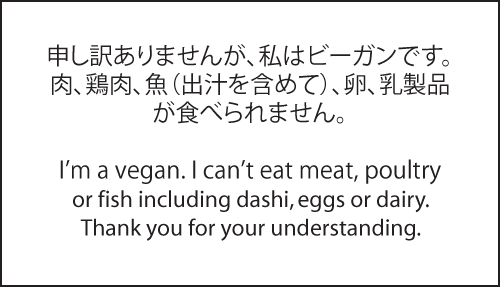 Print this card or save it to your phone to show to restaurant staff. 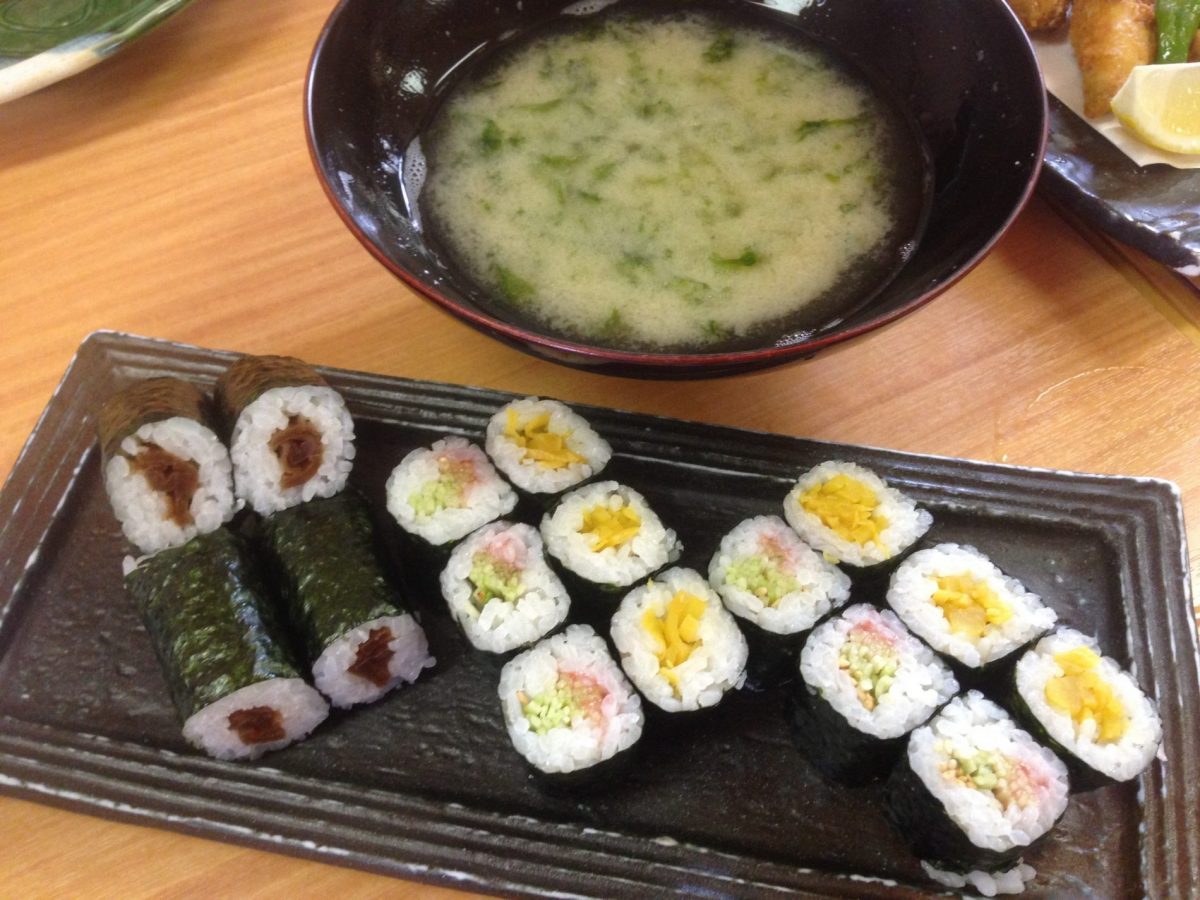 Before my trip, I was worried that being vegan in Japan would detract from my experience, but it actually made it more interesting. It showed me a different side of Japanese cuisine that I didn’t know existed, and I had a ton of fun exploring streets that I probably wouldn’t have walked down if I hadn’t been looking for vegan food.

This experience also taught me what it’s like to travel with non-vegan friends and how to not let mistakes ruin your travels. I am excited to return to Japan someday to try more types of vegan food and see how far the vegan movement will go there. 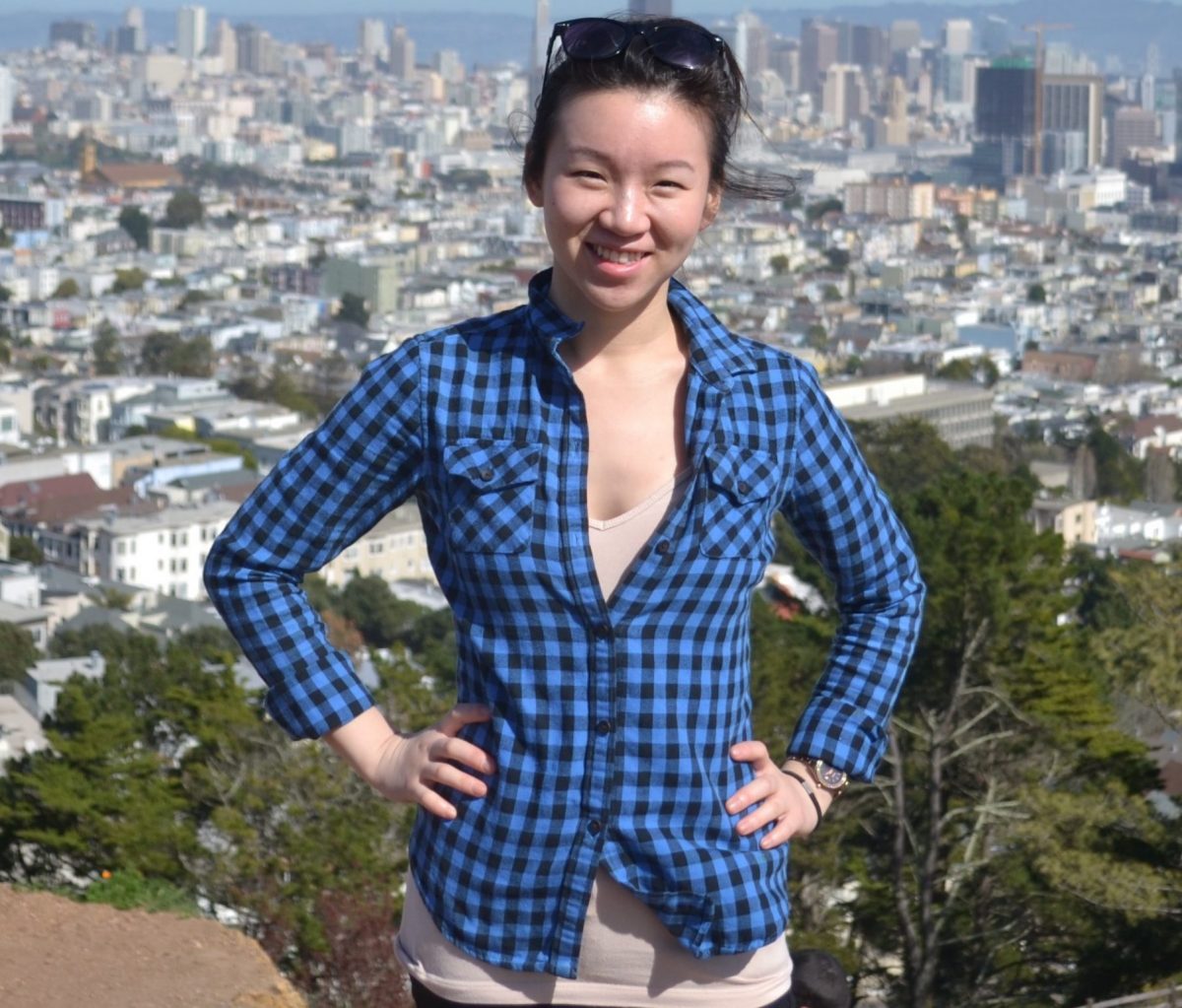 Hui Liang is a freelance writer and blogger with a passion for travel and personal development. She hopes to use her own knowledge and experiences in solo traveling, overcoming fears, and goal setting to inspire others to go after their own dreams.

This post contains an affiliate link to iTunes. If you download the HappyCow app or other iTunes product from that link, I will get a small commission, at no additional charge to you. As always, I only recommenend products that I like and use myself. The HappyCow app is a must have!