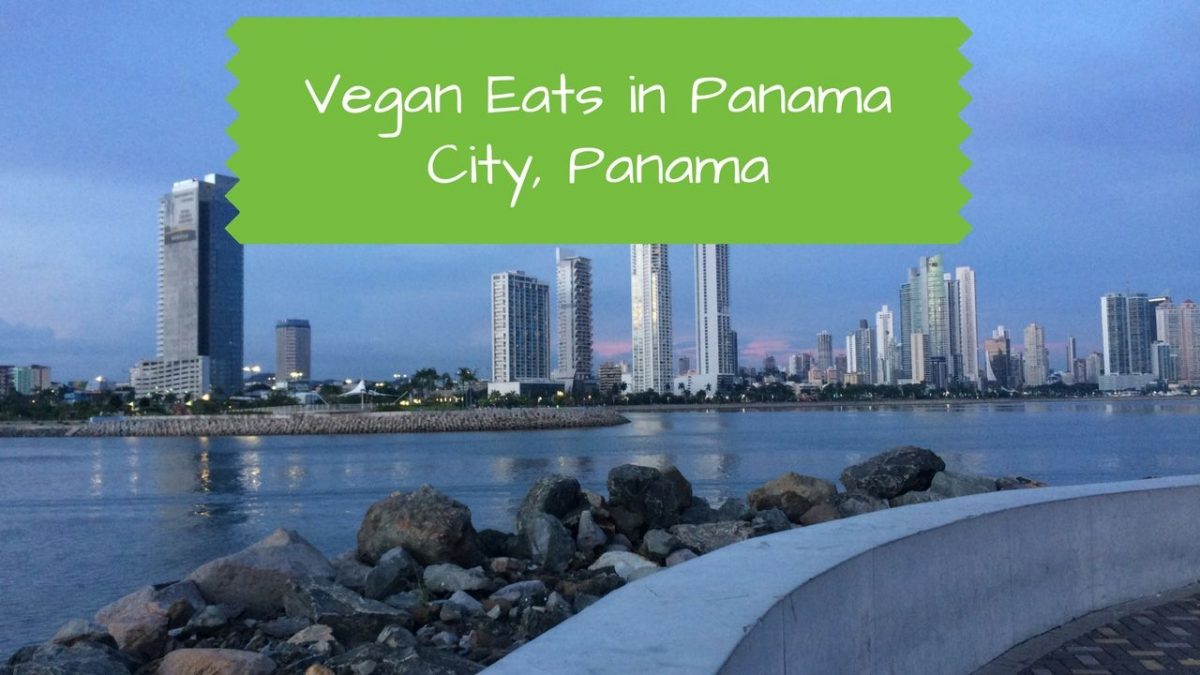 Our guest post today is from one of my favourite people in the world. You've probably heard her name before ... it's Kim Sujovolsky from Brownble! Kim has just returned from a trip to Panama City, Panama, and she's here to share her experience as a vegan in Panama with Nomadic Vegan readers. Here she is!

Ask any Latin American you know about the typical cuisine in their home country, and they will almost all say one thing: meat.

Unless you ask a vegan, that is. Then the answer changes completely!

It always surprises my relatives back home when I can build an entire plate of delicious food in a restaurant that is famous for their steak, or their fish, or their [insert any dish here that is covered in cheese].

This fact is also annoying, because everyone, and I mean everyone, wants a bite of my food.

On our most recent trip to Panama City for a little family reunion, this is exactly what happened at a very typical Panamanian restaurant overlooking the Panama Canal.

Prime real-estate, beautiful and elegant ambience, a menu full of seafood and other meat-based dishes, and I ate the most delicious vegan meal of my entire trip.

After which, my meat-eating mother-in-law said she would be ordering the same as me a few weeks later when she had another reservation at the same restaurant. But more on this delicious meal later.

The truth is that most countries in Latin America have a love affair with vegetables, tropical fruits, rice, beans, lentils, and many other plant-based staples. This is especially true, however, in countries around the Caribbean.

The flavor profiles are fantastic, and a simple plate of sweet plantains will make you swoon.

I was expecting to find many of the dishes I used to eat in my home country of Venezuela. And although there are some similarities, Panama was full of surprises.

One minute you’ll be in a beautiful street with gorgeous freshly painted multicolored houses, then walk 10 meters and find three abandoned buildings that have been completely destroyed.

They're there to tell you that there’s another side to the city’s modern skyscrapers and 5-star restaurants. It’s a city where modernity meets chaos, where you’ll come face to face with a New York City-style skyline as well as poverty-stricken areas, sometimes side by side.

Of course, there's much more to Panama than just the capital. Check out this Panama travel guide for ideas on other places to include in your itinerary if you're looking for stunning natural scenery.

But even in the city, the coastal boardwalk, “la cinta costera”, is a thing of beauty, and so are the traditional houses of the old town, “el casco antiguo”. Colorful and filled with music and, yes…. delicious food.

When I say delicious food, I of course mean delicious vegan food. The vegan scene is slowly but surely exploding.

Although many traditional Panamanian foods are very seafood and meat-centric, restaurants with vegan options abound, and you can definitely whip up a plate of plant-based goodies by asking the servers to remove something, or by ordering the amazing sides you’ll see below.

In the countless restaurants specializing in world cuisines, you’ll also find fully vegan dishes. And often these are marked as vegan on the menu! Who else jumps up and down when you see this?

UPDATE January 2019: SweeTea Day appears to have changed its name to Boba Town. 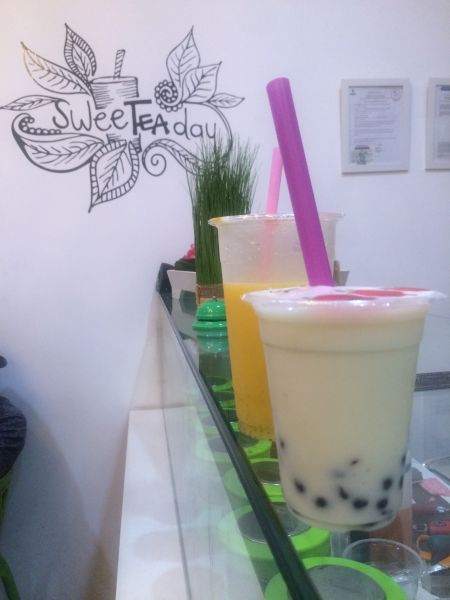 As soon as you walk into the casco antiguo or old town, you’ll find this sweet little shop that is basically a juice and smoothie bar. They offer soy milk and almond milk as the base, not to mention countless tropical fruits and superfoods like matcha and chia.

The one I ordered was the clear winner, and I’ve been craving it ever since: a virgin piña colada with extra tapioca pearls. It’s not on the main menu, but on a smaller one right on the toppings bar. Be sure to ask for what you want. The staff is super friendly.

Vegan-friendly restaurant in the middle of the old town 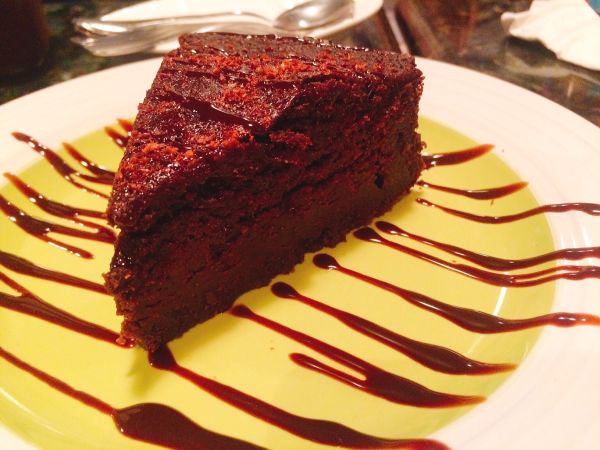 This was easily the most darling place we went to in our entire trip: low ceilings, very romantic atmosphere, extremely quaint and with very friendly staff.

Although their vegan sandwiches were OK, they didn’t have all the options on the menu, which meant that I couldn’t try their exciting-sounding vegan no-salmon or vegan no-turkey sandwiches.

They also have a selection of salads, a burger that looked really good, and they even offer vegan brunch. It's a little expensive for the amount of food you get, but I loved supporting a restaurant that prides itself on being vegan-friendly.

My advice however, is to just go for a cup of coffee and dessert, since their vegan sweets were varied and incredible. We had their unbelievable chocolate cake, but so many of their other options looked good. Several other vegetarian restaurants with vegan options are near it, so make sure to stop by and give them a try! 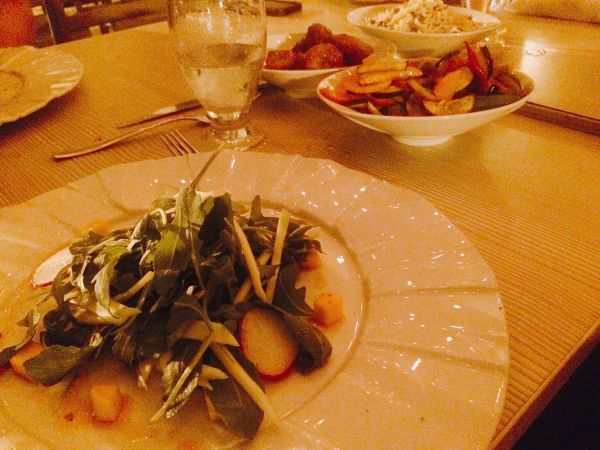 When in Panama City, visiting the outstanding masterpiece of engineering that is the Panama Canal is a total must. But if you can do it while eating vegan food at the same time as enormous boats go by, even better!

This was my favorite meal out of our entire trip, since I got a taste of the real cuisine of Panama. The menu is almost all animal-centered, but leave it to me to build the best plate on the table and have everyone drooling over it.

We ordered one of their two salads - a mango, couscous and arugula salad - and asked them to bring us a bunch of different sides and two empty plates.

We ordered their “plátanos en tentación” (sweet plantains in syrup - the best dish by far!), “yuca frita" (fried cassava or yuca - a dish you can find almost anywhere in Panama), “arroz con guandú y coco” (rice with beans and coconut) and “vegetales salteados” (sautéed vegetables - which sound simple enough but were bursting with flavor).

A beautiful meal, filled with the most authentic flavors of the region, overlooking history. Priceless. (Reservations are recommended, and try to ask for a table on the terrace).

Japanese chain of restaurants with lots of vegan sushi 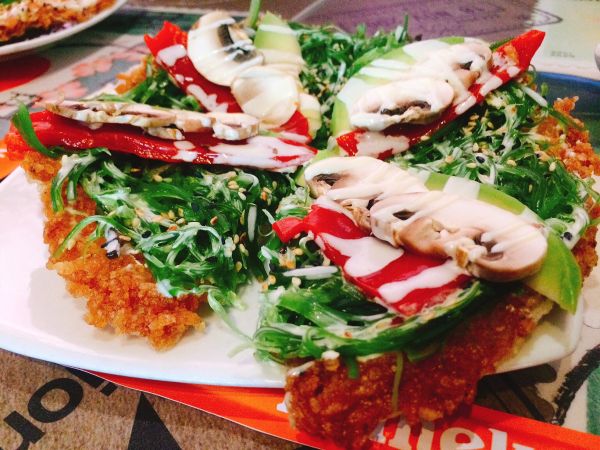 If sushi is your jam, then you’ll love the countless vegan options at this Japanese restaurant chain. I now have a new-found love for sushi pizza. Yes, that’s a thing, and yes, it’s as good as it sounds.

A crunchy base of fried rice over rice paper, topped with wakame seaweed, mushrooms, avocado, peppers and what seemed to be a tahini based sauce (although I would check with the waiter since egg-based mayonnaise is also used at the restaurant).

We also had delicious sushi rolls and the best spearmint lemonade, and we left wanting to try their countless vegan stir-fries, noodle and curry dishes.

The vegetarian menu is mostly vegan 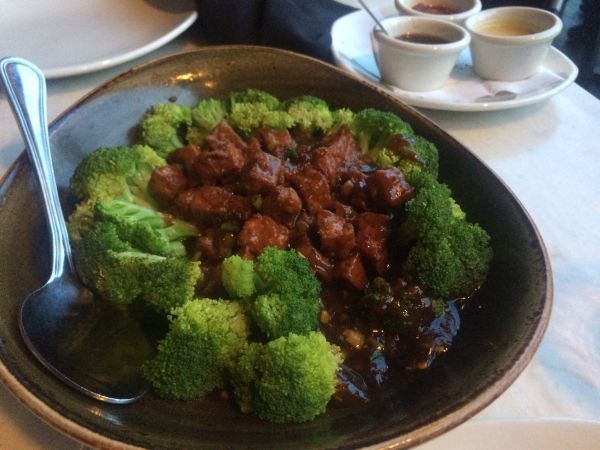 Shopping is such a big part of the scene in Panama City, and huge, Miami-style shopping malls are everywhere. If you’re in the mood for doing some shopping and then getting a bite to eat, we loved the vegan options at PF Changs.

We had delicious vegetable curries, the most scrumptious spicy tofu and broccoli dish, and perfect vegetable stir-fried rice and tofu lettuce cups. The staff is very friendly, too.

You can enjoy some of the Panama City views by sitting on the terrace, and then you can head into the mall for a quick trip to a local supermarket chain called Riba Smith that sells loads of vegan products, or for some Italian gelato at Amore Mio.

Italian gelato in the middle of a shopping mall 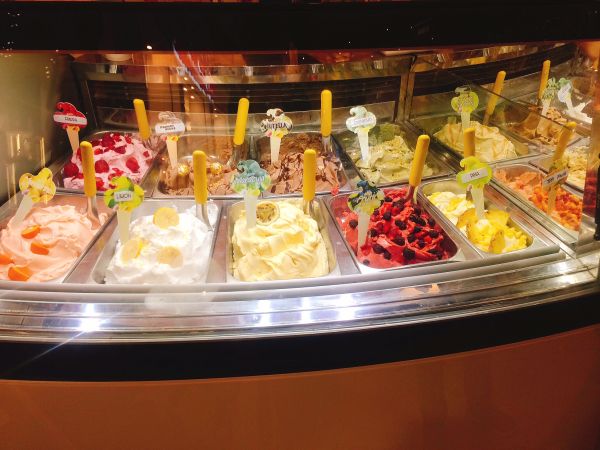 Try some of their delicious non-dairy sorbets. The pineapple was a clear winner!

Not all their gelato is vegan, so simply ask this question: “Tienen helados sin leche?” (“Do you have any ice cream without milk?”). They’ll quickly tell you which options are vegan-friendly.

Supermarket that stocks many vegan products 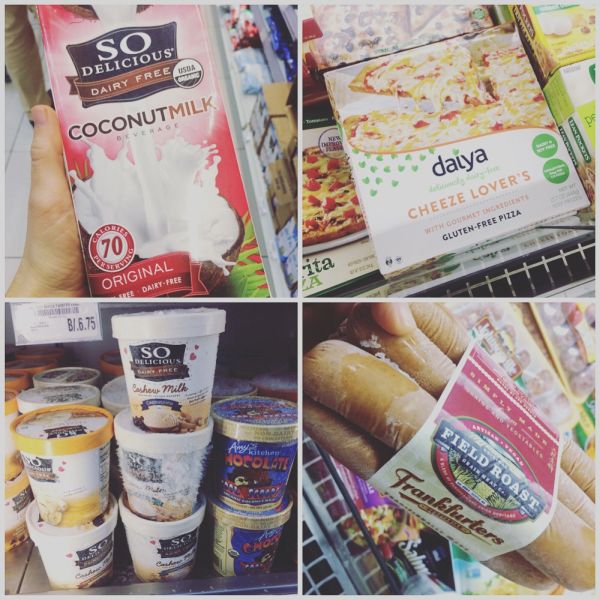 If you want to stock up on some snacks or even buy some groceries, you’ll have plenty of options here, from the large array of vegan products to the fresh produce and snacks. 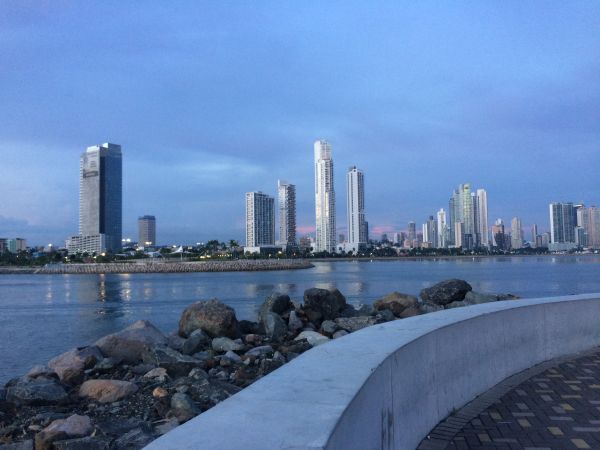 This well-known burger restaurant offers three different veggie burgers, which can easily be made vegan with some simple substitutions. They’re served with delicious fries, sweet potato fries, or fried yuca (“yuca frita”), and they also have a yummy falafel wrap. The burgers were our favorites, though.

The bad news is, we were so hungry we forgot to take a photo of the burgers, so you’ll have to hop on a plane, take in the beautiful Panamanian sea-side, eat lots of vegan food and send me a postcard. You will definitely never go hungry as a vegan in Panama City. 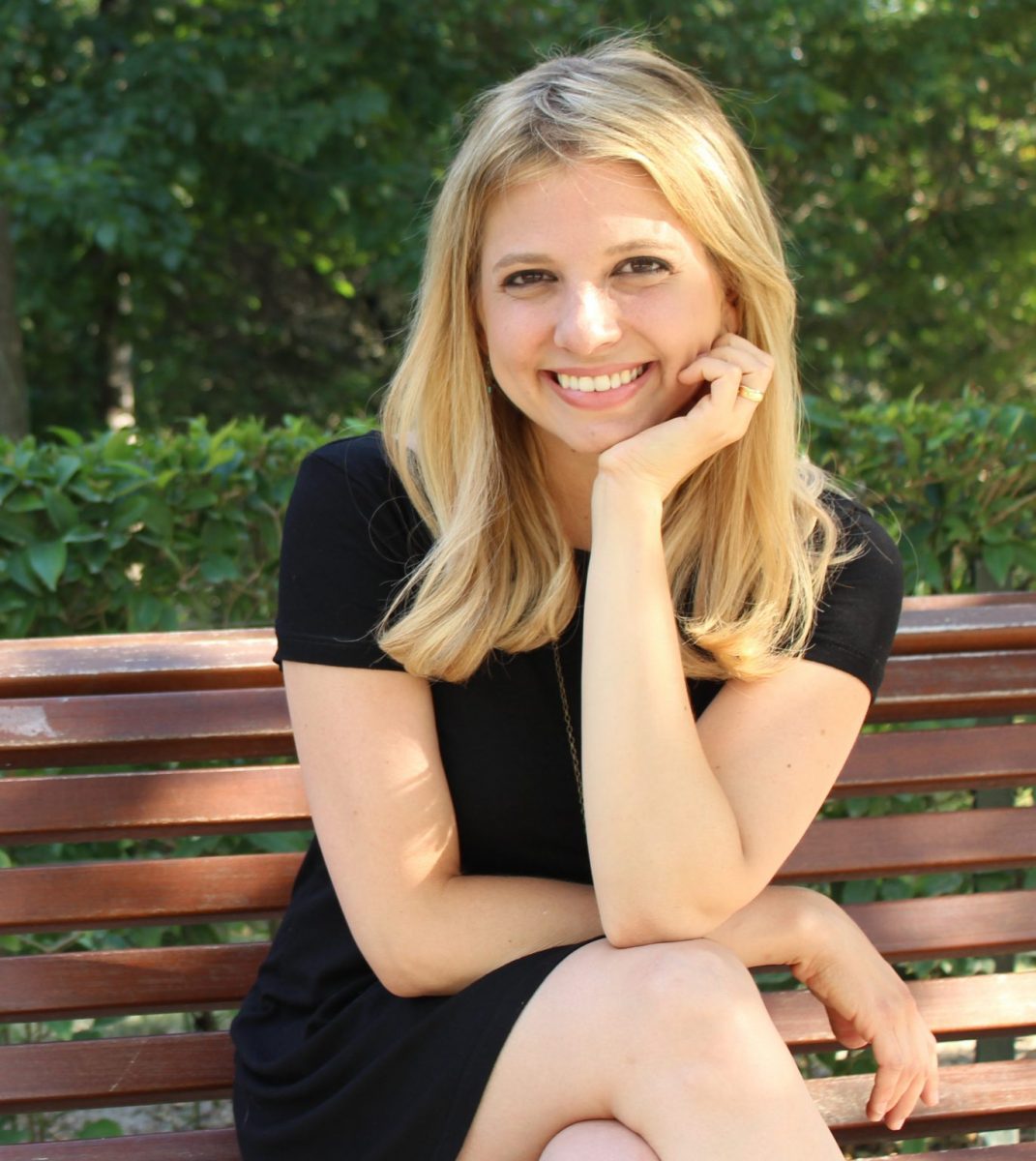 Kim Sujovolsky is a certified plant-based cook and blogger helping people make the transition to being vegan, cook deliciously and improve their relationship with food. She is the co-founder of brownble.com and the My Brownble online program and a premium content contributor for Vegan Outreach and the Food Choices Academy for Health Studies. She is on a mission to help people get back in the kitchen, cook delicious vegan food without feeling overwhelmed, help you create healthy habits that last you a lifetime, while falling in love with the simplicity of food and cooking again. 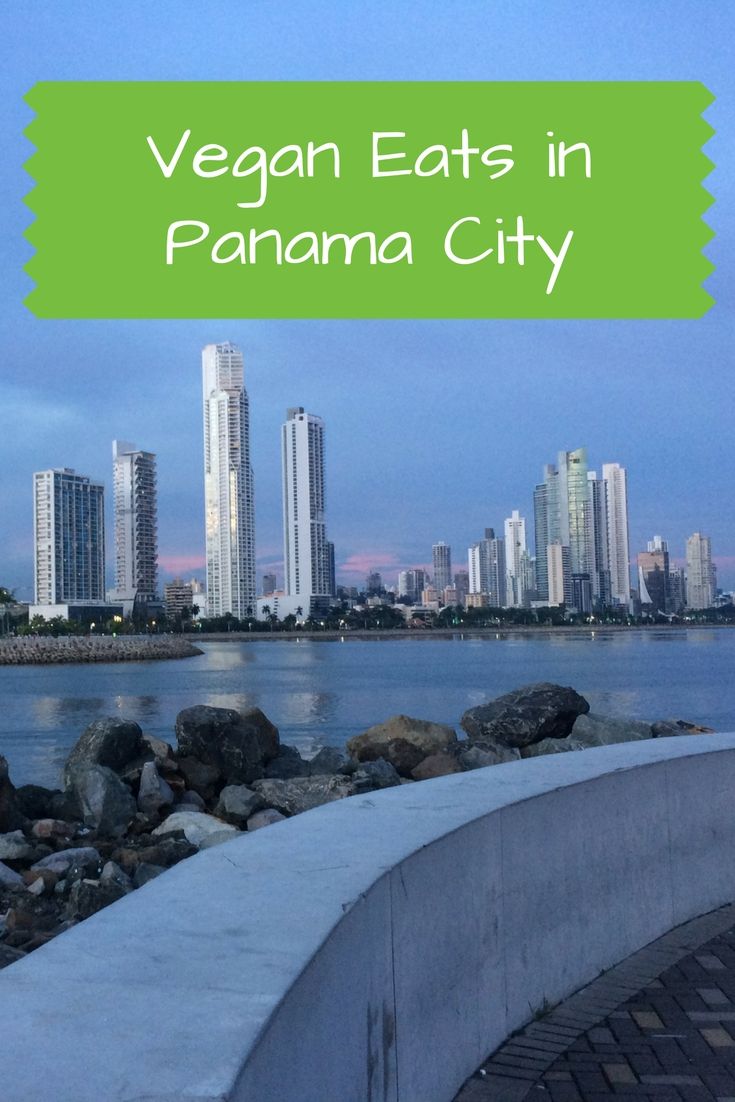