Vegan in the Congo (DRC) 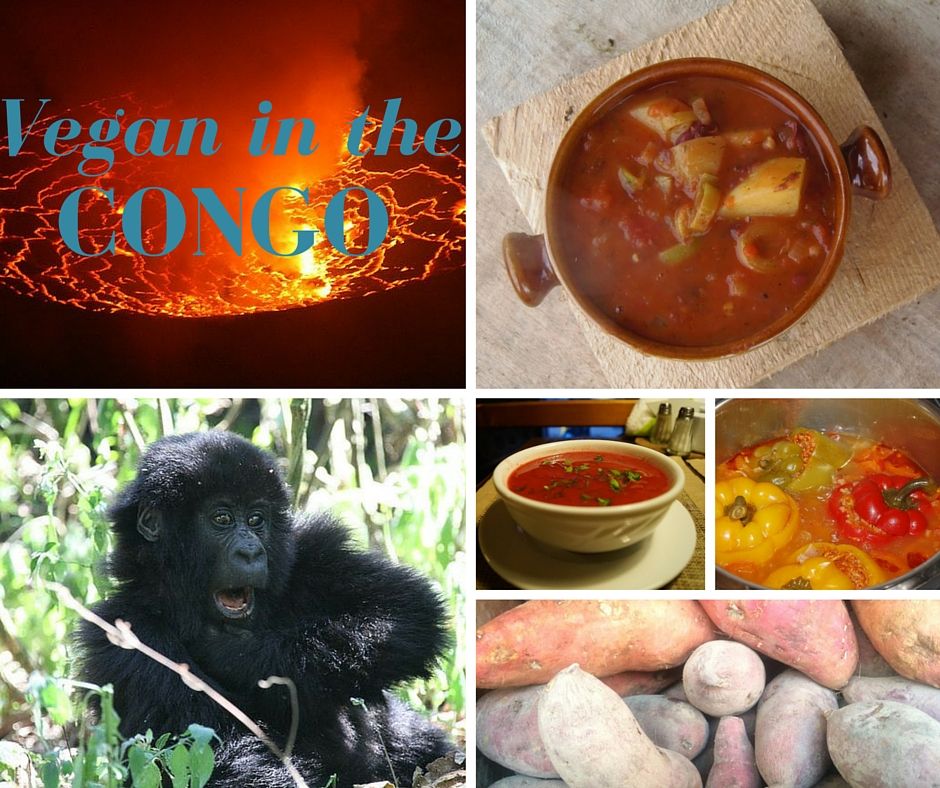 Today I'd like to introduce you to a very special guest blogger, Moise Ngwesi (a.k.a. Moses Chris), who joins us all the way from the Democratic Republic of the Congo!

Back in 2010, I had the amazing privilege of travelling to the DRC, where I met a family of mountain gorillas and camped out on the rim of Nyiragongo, a fiery active volcano that features the world's largest lava lake. Both experiences rank among the most incredible of my life thus far. 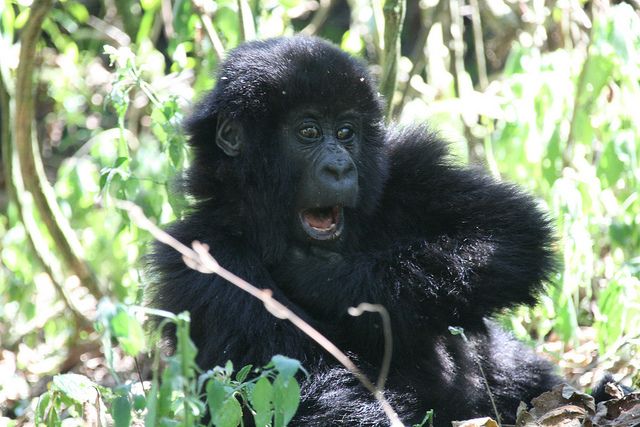 Vegan baby gorillas sure get excited about eating plants!

Moise, however, lives not in the depths of the jungle but in the country's bustling capital of Kinshasa, where he educates people about plant-based nutrition and inspires them to get active, healthy and happy.

He loves to point out that much of traditional African food is vegan.

I asked Moise to share with us some of his favourite vegan dishes from Congolese cuisine, and he was more than happy to oblige. If you're feeling adventurous enough to travel to Kinshasa yourself, I'm sure his insider tips will be invaluable!

But even if you don't see yourself venturing that far off the beaten track any time soon, Moise's descriptions of Congolese dishes offer a fascinating look at a cuisine that has traditionally been plant based, though that tradition is now being threatened by Western influences and globalization. Tell us all about it Moise! 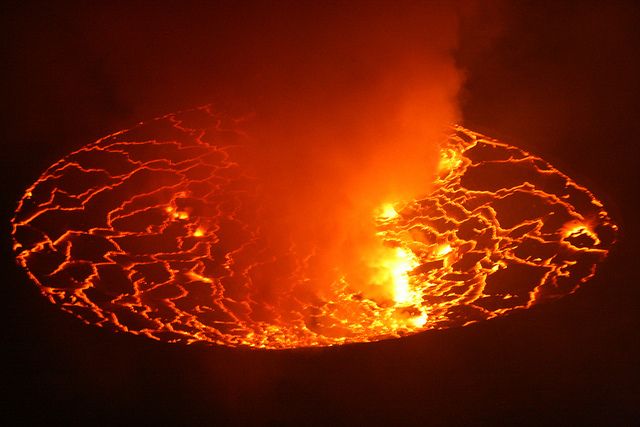 Lake of fire inside Mount Nyiragongo

If you think you'd like a taste of Congolese cuisine, be forewarned; you probably won't be able to stop with just one bite! Why? Because Congolese meals are delicious! They often consist of fufu, served with vegetables in the form of stews.

I know you're probably wondering what the heck fufu is. It's a dough-like mash or paste made of cassava or corn flour, or both, and cooked in water. It is sometimes a little sticky and sometimes not.

It can be whitish in colour like the flesh of custard apples, yellowish, or even darkish, depending on the colour of the corn flour and on how long the cassava flour has been stored.

We eat fufu with our hands by tearing off golf-ball-sized bits of fufu from the larger ball that serves as the main part of the dish, and then dipping those into the accompanying stew. Some people make tiny holes in the fufu with their thumbs and use them to scoop up thimblefuls of sauce. 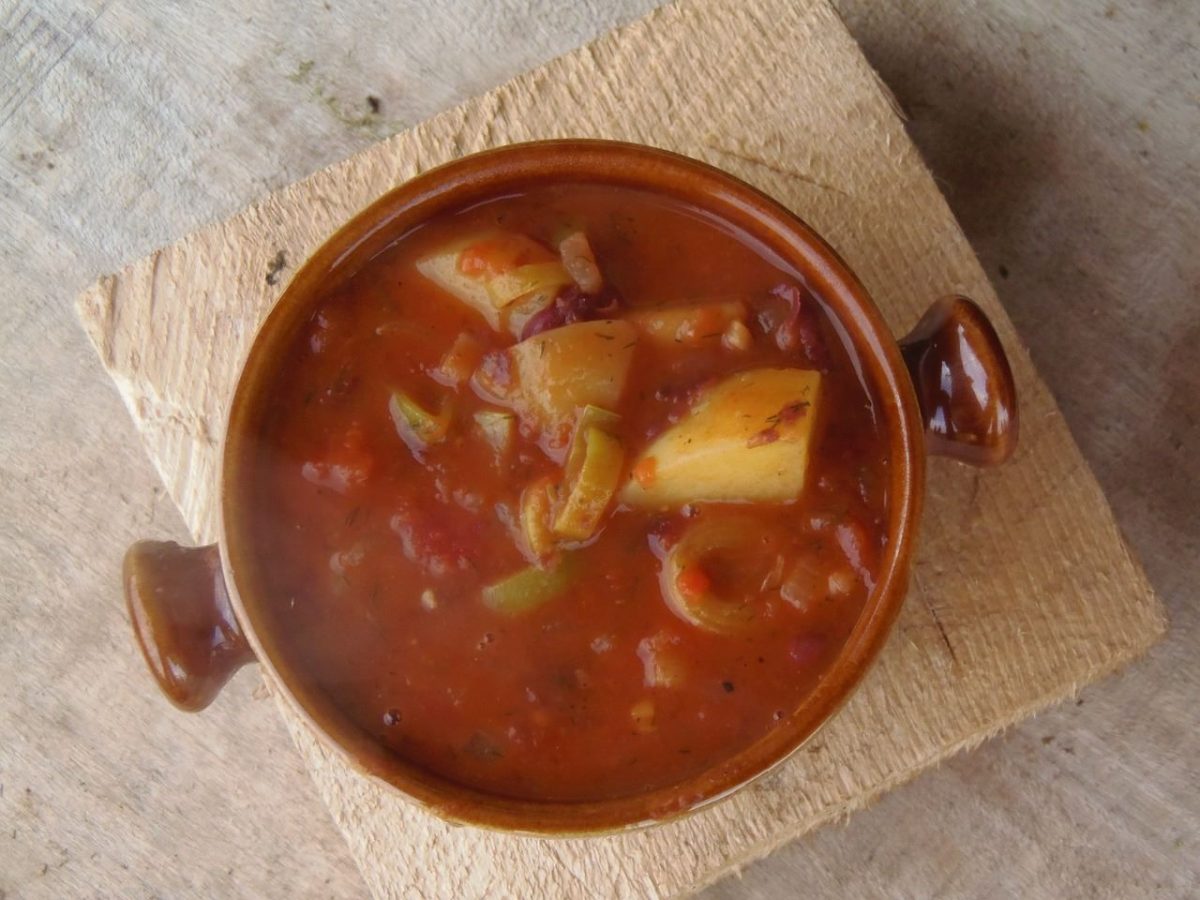 This is a staple food, like rice, sweet potatoes, or kwanga - a type of fermented bread that is made from cassava cooked in banana leaves or other leaves from the jungle.

Kwanga can also be off-white like the flesh of custard apples or much darker, depending on where in the country it has been made and how long it has been stored. It can be stored for up to a month or even longer.

Lituma is another staple here and is a popular base for a meal; it's made from plantains that have been cooked in water and then mashed. Like fufu, lituma is also served in the form of a ball.

Sweet potatoes are yet another staple in the Congo. They are prepared and served much like lituma and are sometimes mixed with roasted peanuts. Alternatively, plantains and sweet potatoes can simply be chopped up and boiled in water, then served without being mashed. 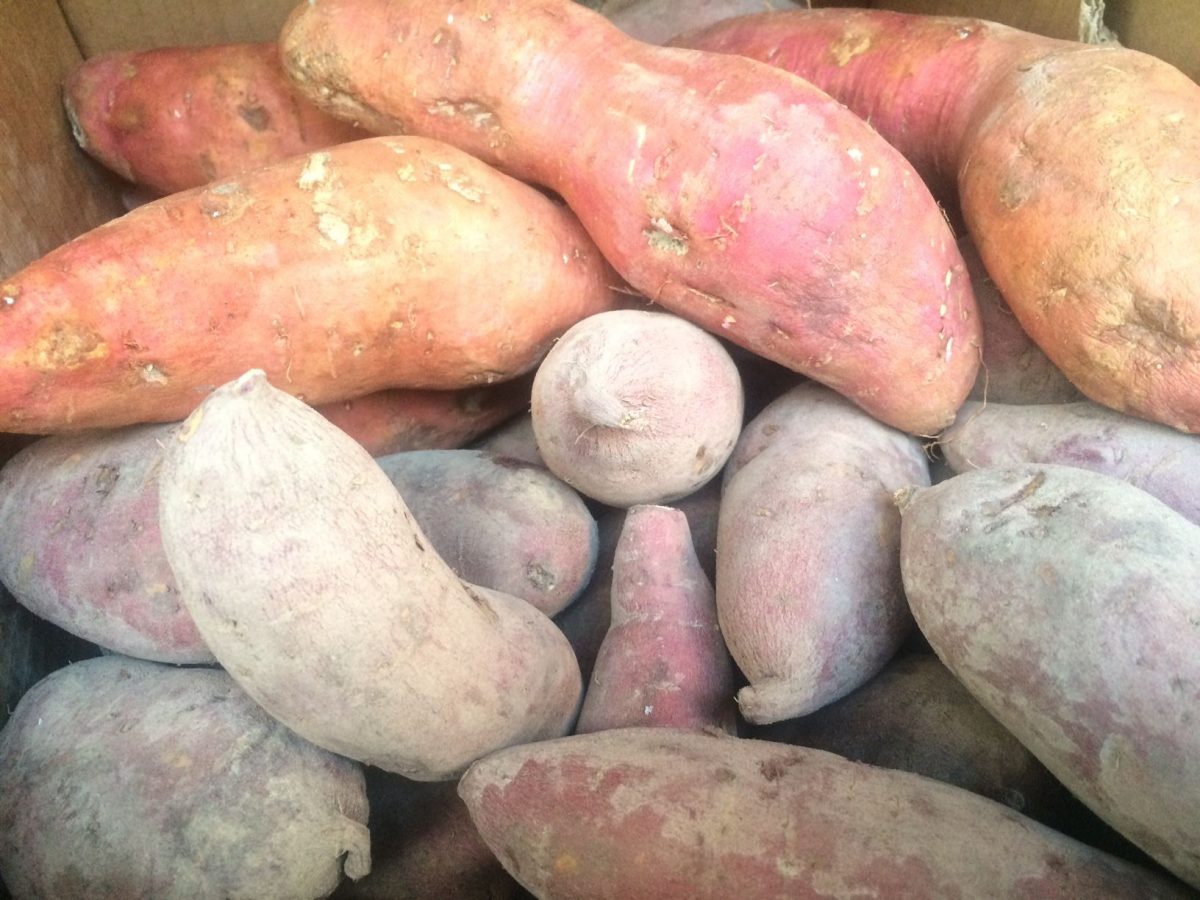 Mushrooms are plentiful in the DRC and can be used as a substitute for meat. Actual vegetarianism, however, is virtually unknown in the country. These days, most meals eaten by city folk – even those containing mushrooms - are eaten with meat or fish.

Meat and fish (especially when fresh and not frozen) are seen as luxury items, much like fruits, vegetables, herbs and spices are viewed in other parts of the world.

Meat consumption is on the rise, however, because for the last two decades cheap meat produced on factory farms in industrialized countries has been imported into the Congo. Even though meat is cheap now, people still feel like they are indulging in a luxury when they eat it, and so there is a sense of pride around meat-eating. 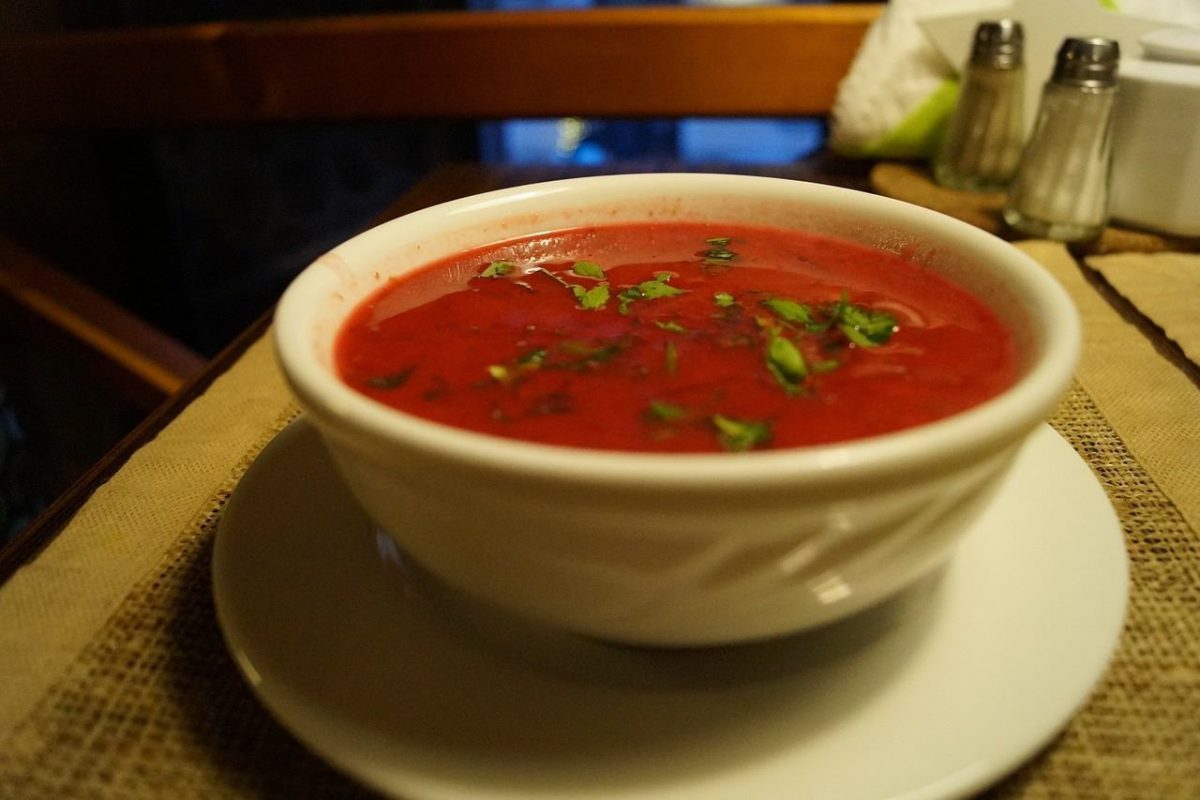 By the way, did you know there are two Congos? This article is about vegan food in the Democratic Republic of the Congo.

It's important to point out that the meals I've described here are eaten in local homes but not in regular restaurants. Most restaurants in Kinshasa are owned and run by foreigners who recreate the cuisine from their own countries.

This is true even in the few places that are owned and operated by locals. On a positive note for vegan travellers, many of these foreign restaurants are Lebanese or Indian – two cuisines with an abundance of vegan and vegetarian dishes.

The only place you will find traditional, home-cooked Congolese meals is in Kinshasa's nganda restaurants, which serve local ethnic food and beer. Nganda are often owned and run by unmarried women who don't have any business or culinary education, or any business plan.

They are a kind of cross between a bar and a restaurant, and they often focus on the cuisine of a specific region of the country. They also target one particular type of clientele, like private sector employees, civil servants, military officers, etc.

You May Also Like: The Swaziland Reed Dance Festival - an Unmissable Spectacle 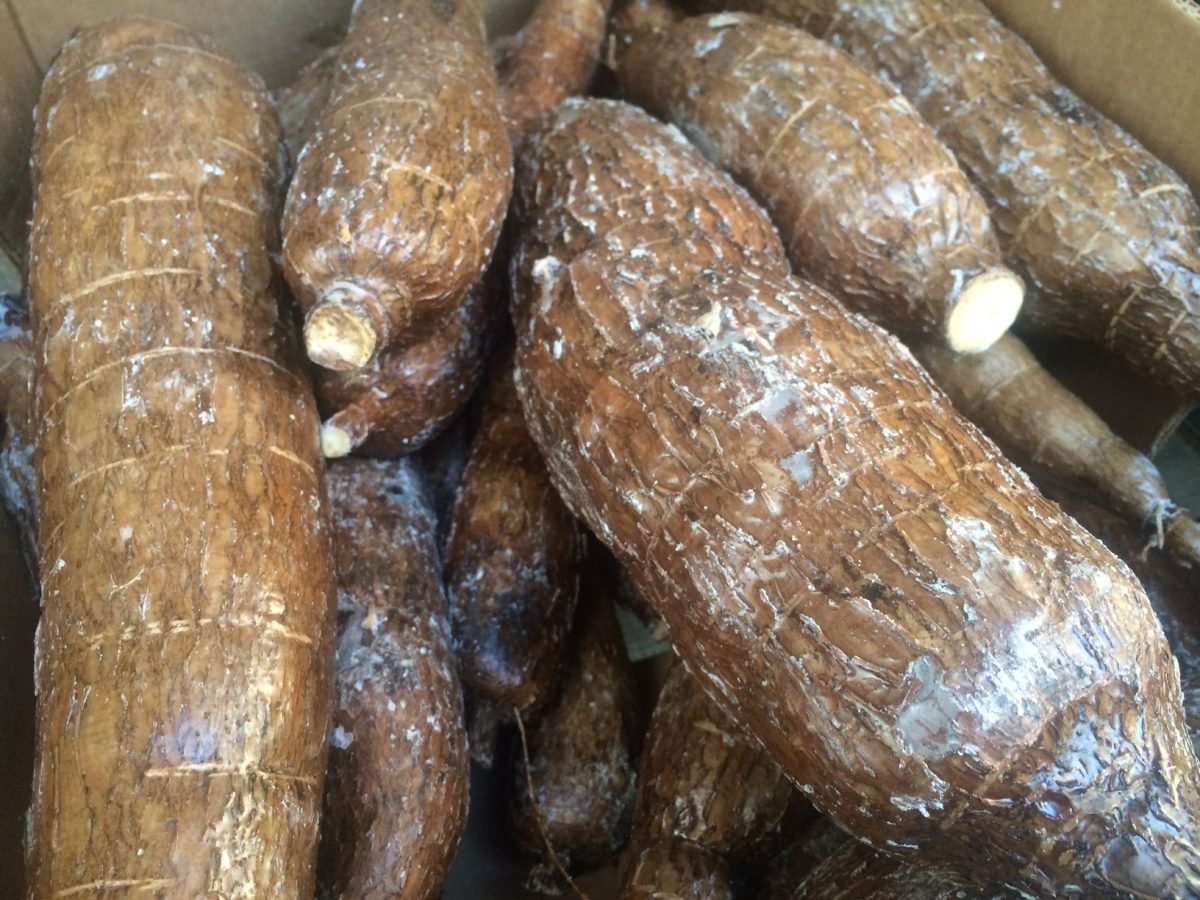 Cassava - a staple in the Congo

If you'd like to experience an authentic Congolese meal in a nganda, just let the owner know ahead of time that you don't want any meat or other animal products. Dairy is not often used in Congolese cuisine anyway, so it's mainly just meat that you'll need to watch out for.

Tell them to prepare it the way it's done in the villages. In Lingala, this would sound something like: "Kotia musuni te, mbisi te mpe eloko moko te oyo owuti na nzete te. Lambela ngai yango na ndege ya mboka".

There are four national languages and hundreds of dialects spoken in the Democratic Republic of the Congo. While French is widely used as a lingua franca, Lingala is the most commonly spoken local language. Here are the names of some key plant foods in Lingala:

Kwanga: a type of fermented bread

Lituma: a staple food made of mashed plantains

Pili pili: very hot peppers served with nearly everything. Often dried, ground into flakes and sprinkled on food (even fruit!) or mixed into dishes

Moambe: peanut butter, or a sauce made from peanuts

Mosaka: a sauce used to prepare dishes, made by pressing the outer covering (not the seeds) of palm nuts, which are the fruits of the African oil palm tree

Nsamba: palm wine made from the sap of a wild palm tree, fermented by natural yeasts, that has an alcohol content of between 5% and 7%. 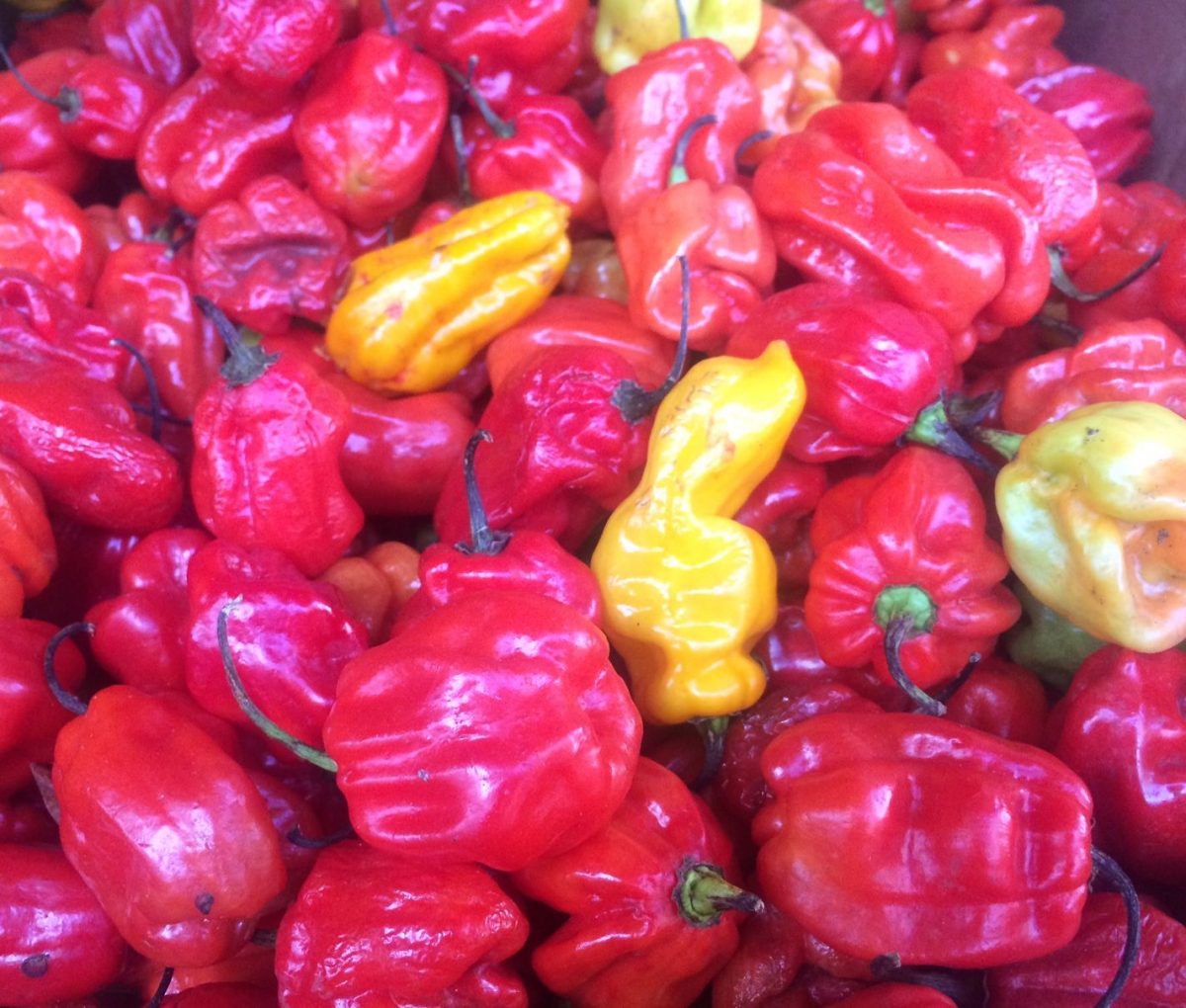 Pili pili peppers - watch out for these fire bombs in Congolese cuisine!

As for useful phrases like “I am vegan”, well, it wouldn't be very useful in the Congo, because the concept simply doesn't exist here. Perhaps this is because we've not yet moved that far away from our traditional style of cooking. Vegan food is just seen as food, period.

Even if you say “Je suis vegan” or “Je suis végétalien” in French, local people probably won't understand what you mean, so it's better to explain to them clearly exactly what you do and don't eat.

What's an example of a naturally vegan dish from your native cuisine? Please share in the comment section below!

When Moise Ngwesi (aka Moses Chris) started medical school in 2010, he attended classes in nutrition, psychology and, in particular, positive psychology. It was then that he discovered the science of happiness and realized that happiness is a mind game requiring positive thought patterns and new perspectives.

Moise is your go-to person for inspiration and motivation to support and empower you no matter what your level on the journey to a better lifestyle. You can find him  on his Instagram, where he  goes by the name  "MoMo Fruity".